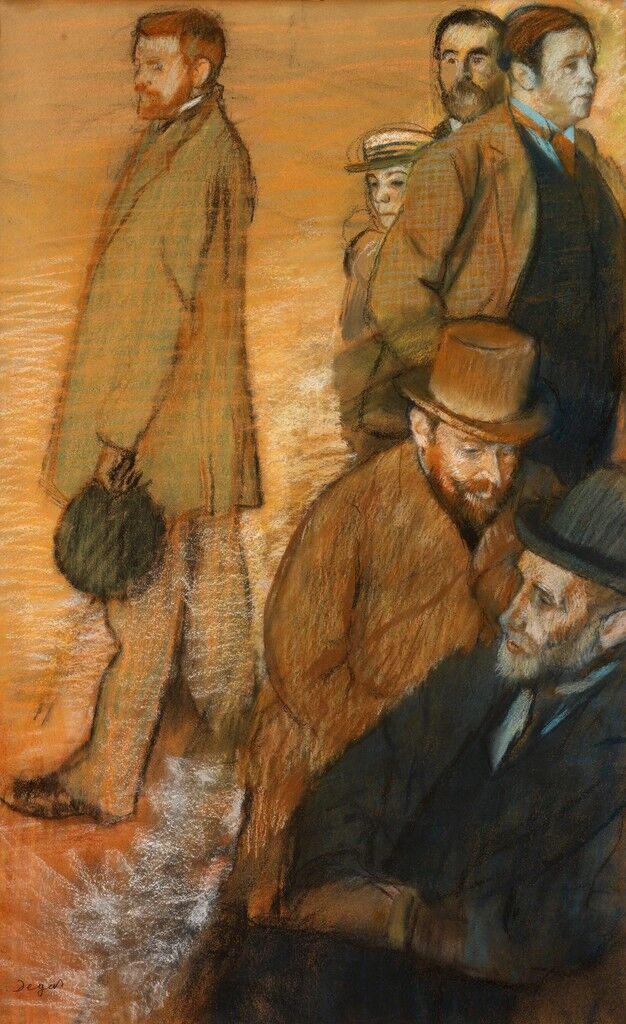 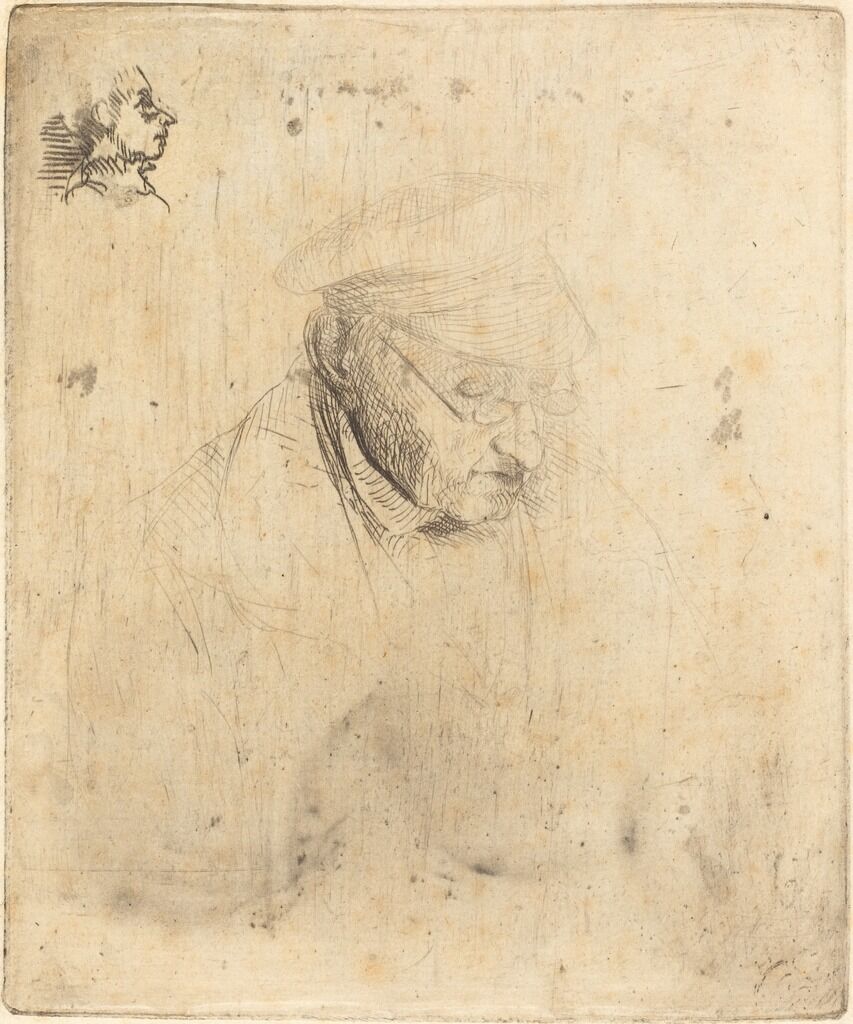 Edgar Degas
René-Hilaire de Gas, Grandfather of the Artist, 1856
National Gallery of Art, Washington D.C.
In September 1885, the French Impressionist
Edgar Degas
accompanied his longtime friends, the Halévys (Ludovic, a playwright and librettist, his wife Louise, and their two sons Daniel and Élie), on vacation in Dieppe, a seaside town on the Normandy coast. The Halévys owned a villa adjacent to Dr. and Mrs. Émile Blanche, whose son, Jacques-Émile, was also a painter, and both families frequently hosted guests.
Inspired by this confluence of writers, artists, and tastemakers, Degas chose to mark the occasion by creating the pastel Six Friends at Dieppe (1885). In her 2005 essay, “Performing Friendship: Edgar Degas’s Six Friends at Dieppe,” RISD Museum curator Maureen O’Brien uncovers the complicated history of the drawing and the equally intricate relationships between the sitters. The pastel features the English painter
Walter Sickert
, Daniel Halévy, Ludovic Halévy,
Jacques-Émile Blanche
, the painter
Henri Gervex
, and Albert Boulanger-Cavé, a cultural influencer in the theater world. Degas offered the finished drawing to Blanche’s mother, likely as a gift for her hospitality. 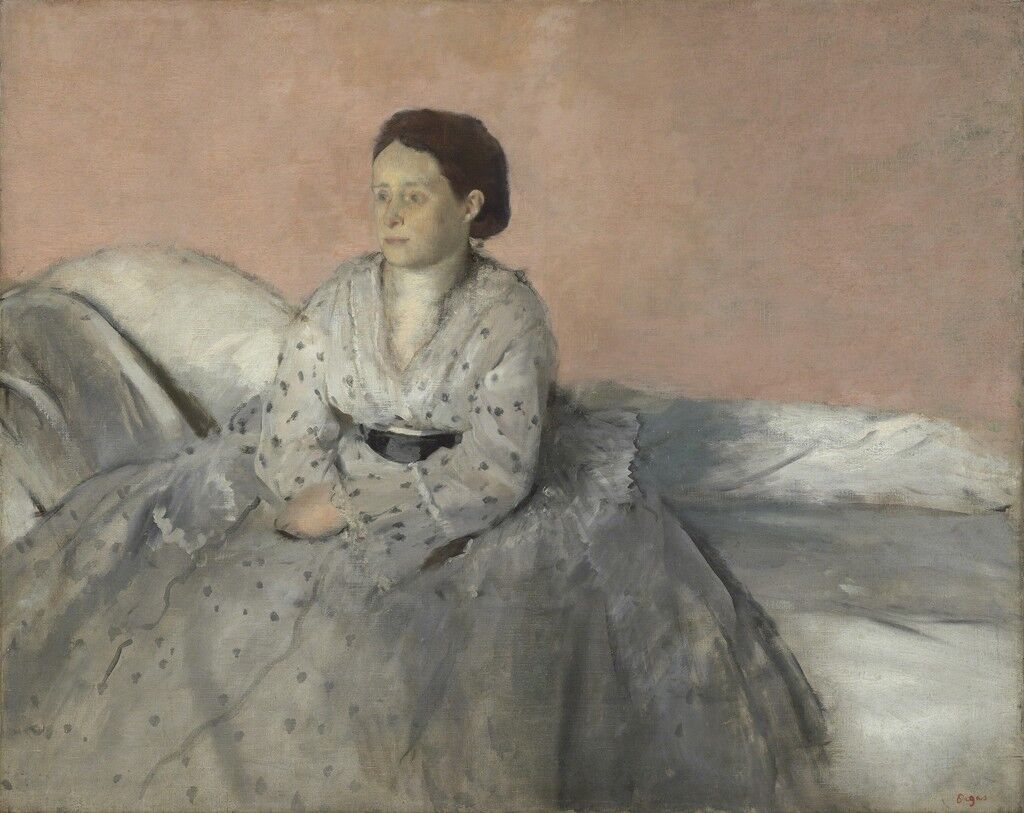 Edgar Degas
Madame René de Gas, 1872/1873
National Gallery of Art, Washington D.C.
Although Degas is best known as a chronicler of the ballet, portraiture was his primary practice between 1855 and the mid-1870s. In an era before selfies and Instagram feeds, portraits functioned as a form of social media, serving as a record of a moment in time and reinforcing social ties between the sitters and the artist. Degas’s portraits function as a roster of his inner circle, but they also serve as a record of travel, artistic collaboration, and domestic drama. Family members were convenient subjects, and Degas made portraits of his grandfather, parents, and siblings throughout his career.
Degas also had great affection for his cousin Estelle Musson, who married his younger brother, René, in 1869. In Madame René De Gas (1872/3), Estelle gazes off into the distance, her eyes unfocused and her expression dreamy, possibly a reference to Estelle’s failing eyesight, which would eventually lead to complete blindness. Degas had great sympathy for Estelle’s ailment, as he, too, had been diagnosed with a degenerative eye condition only a few years earlier. 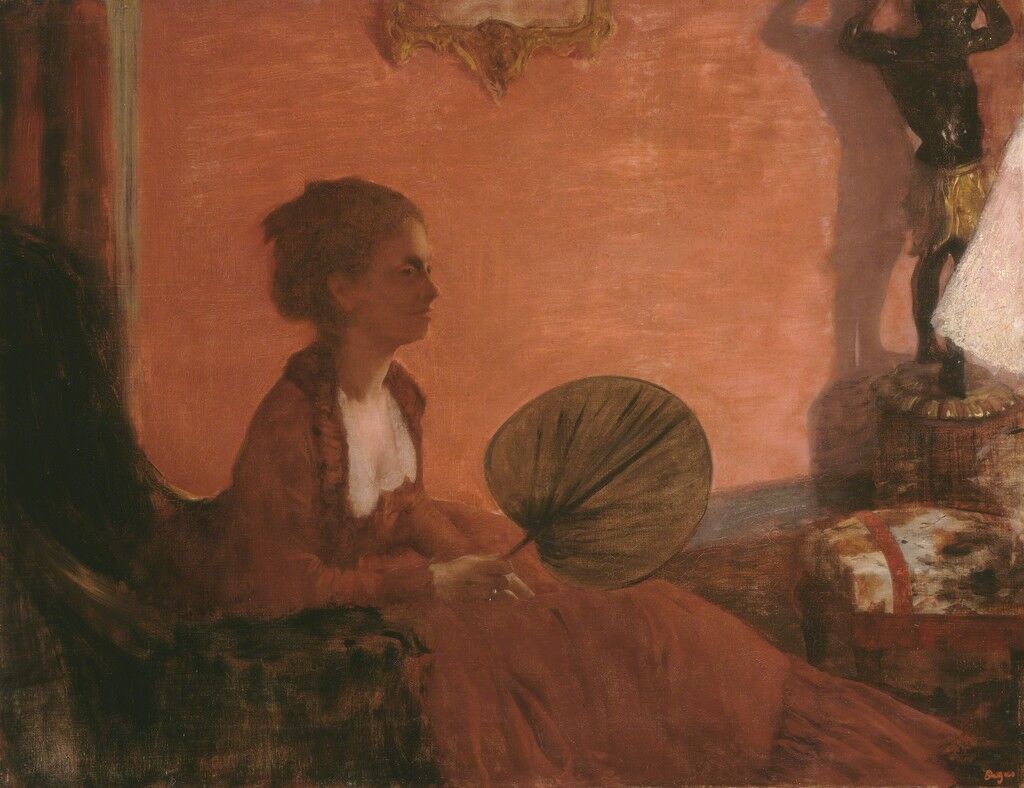 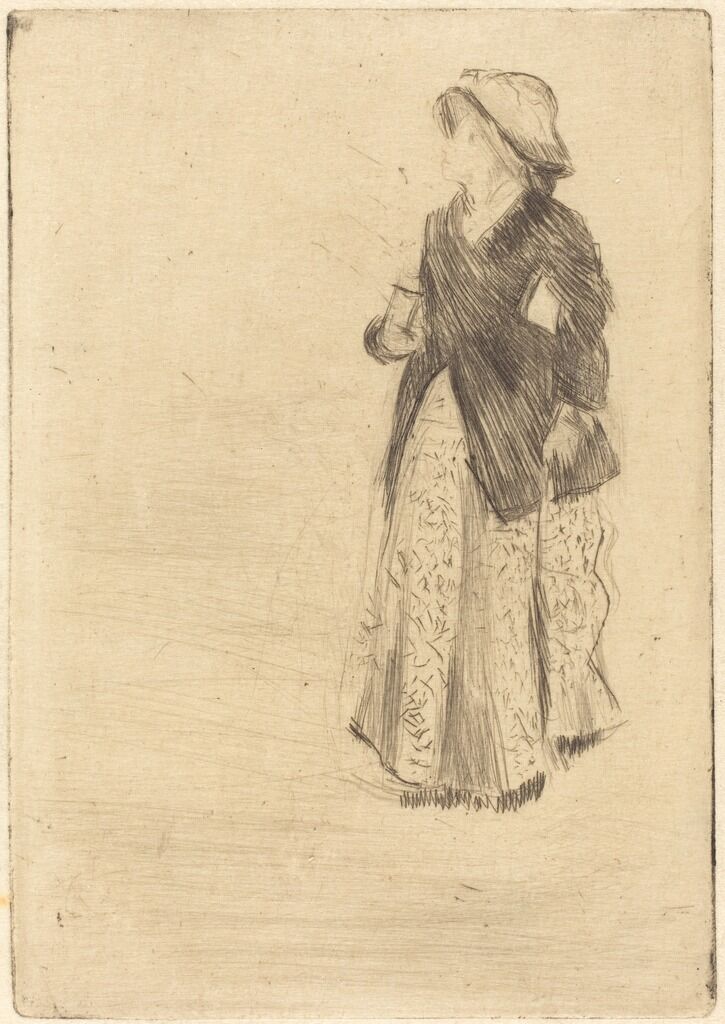 Edgar Degas
The Actress Ellen Andrée, 1879
National Gallery of Art, Washington D.C.
Advertisement
Degas found inspiration outside of his family, portraying other artists, including
James Tissot
,
Gustave Moreau
,
Edouard Manet
, and
Mary Cassatt
, as a testament to their mutual admiration and close friendship. His social circle also included accomplished musicians, such as Blanche Camus and the actress Ellen Andrée, whom Degas portrayed in multiple mediums. Andrée socialized with Degas, Manet, and Renoir at the Café de la Nouvelle Athènes and also served as a model for the artists, appearing in various guises.
Group portraits enabled Degas to create more nuanced and complex portrayals of his sitters, reflecting the sophisticated compositions of his later ballet paintings. The artist painted his sister Thérèse and her husband Edmondo Morbilli shortly after the couple was married in 1863. In this portrait, Degas hints at his sister’s pregnancy with her slightly rounded face, faint smile, and voluminous skirt, which would have hidden her growing figure. Rendered primarily in warm tones, Degas alludes to the happy news. Unfortunately, Thérèse’s pregnancy ended in miscarriage, and in a later portrait of the couple, executed in a cool palette, Degas depicts his sister leaning on her husband for support. 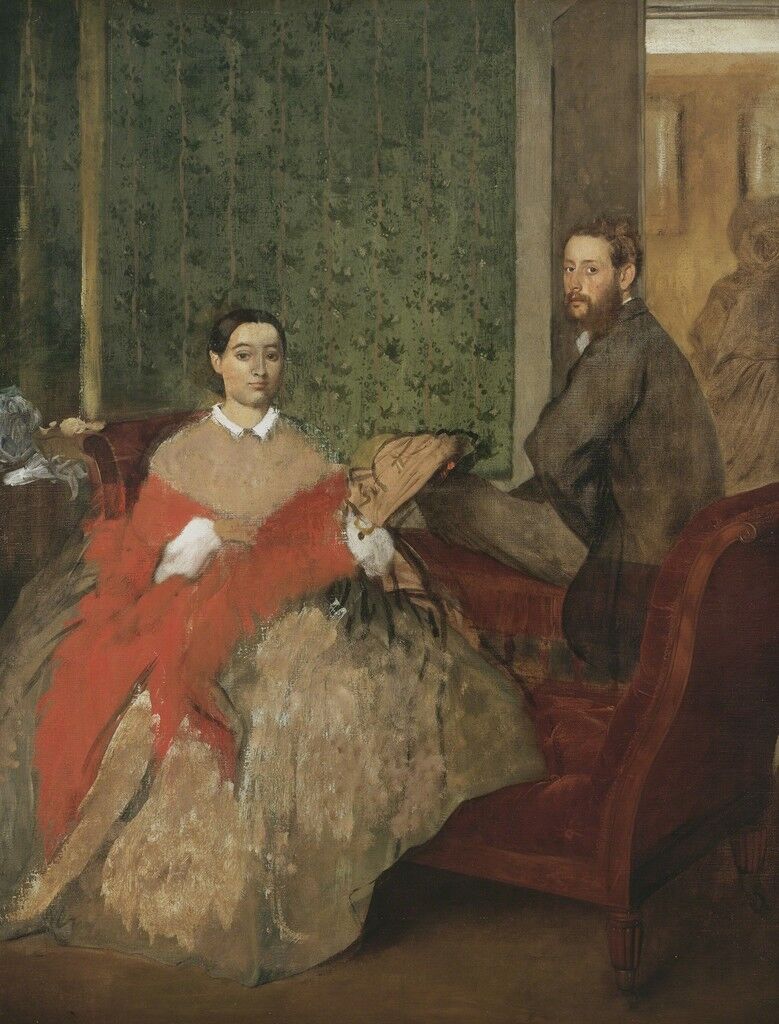 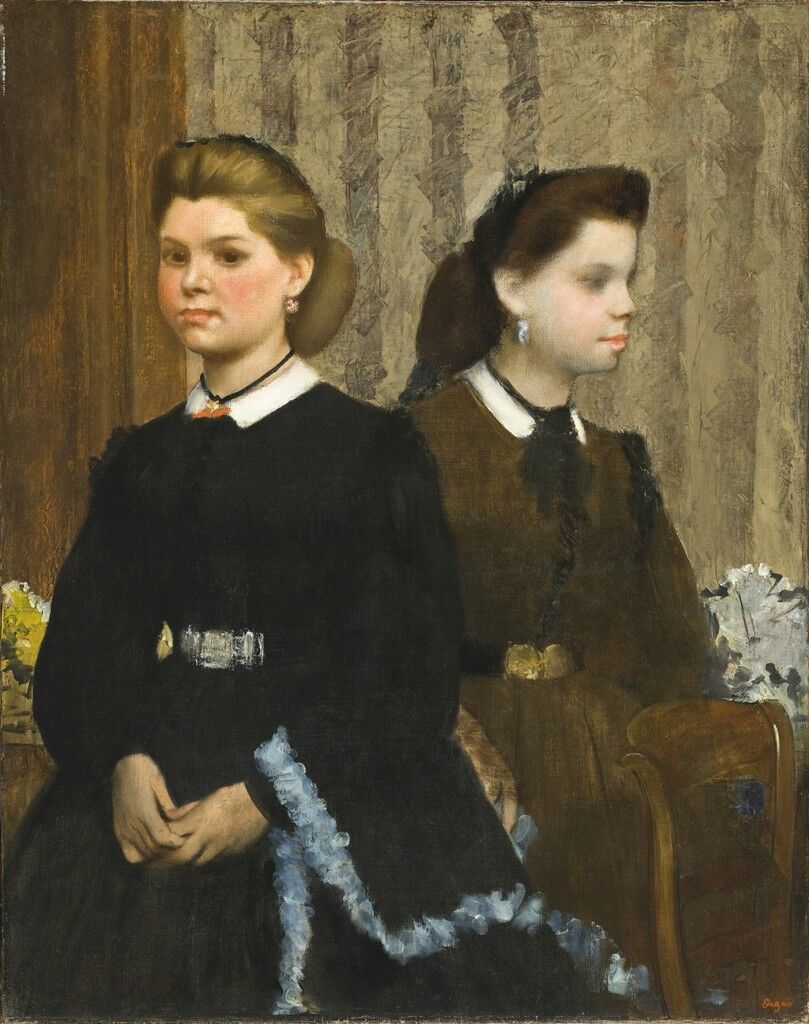 Edgar Degas
The Bellelli Sisters (Giovanna and Giuliana Bellelli), 1865-1866
Los Angeles County Museum of Art
He also portrayed his two cousins, Giuliana and Giovanna Bellelli, a few years later. The lack of affection, or even interaction, between the two sisters is perhaps emblematic of the unhappy circumstances of their home life, as their parents’ loveless and antagonistic relationship was a well-known fact in the family.
In the mid-1890s, after Degas had turned his attention to depicting the ballet and women at their toilette, the artist found new inspiration for portraiture in photography. The medium was not novel to Degas; it was already a pervasive part of society by the 1860s and ’70s, but he didn’t shoot his own images until 1895. Degas’s photographic work consists primarily of portraits of friends and family members, including the Halévys and the Blanches, who had posed for Six Friends at Dieppe a decade earlier. 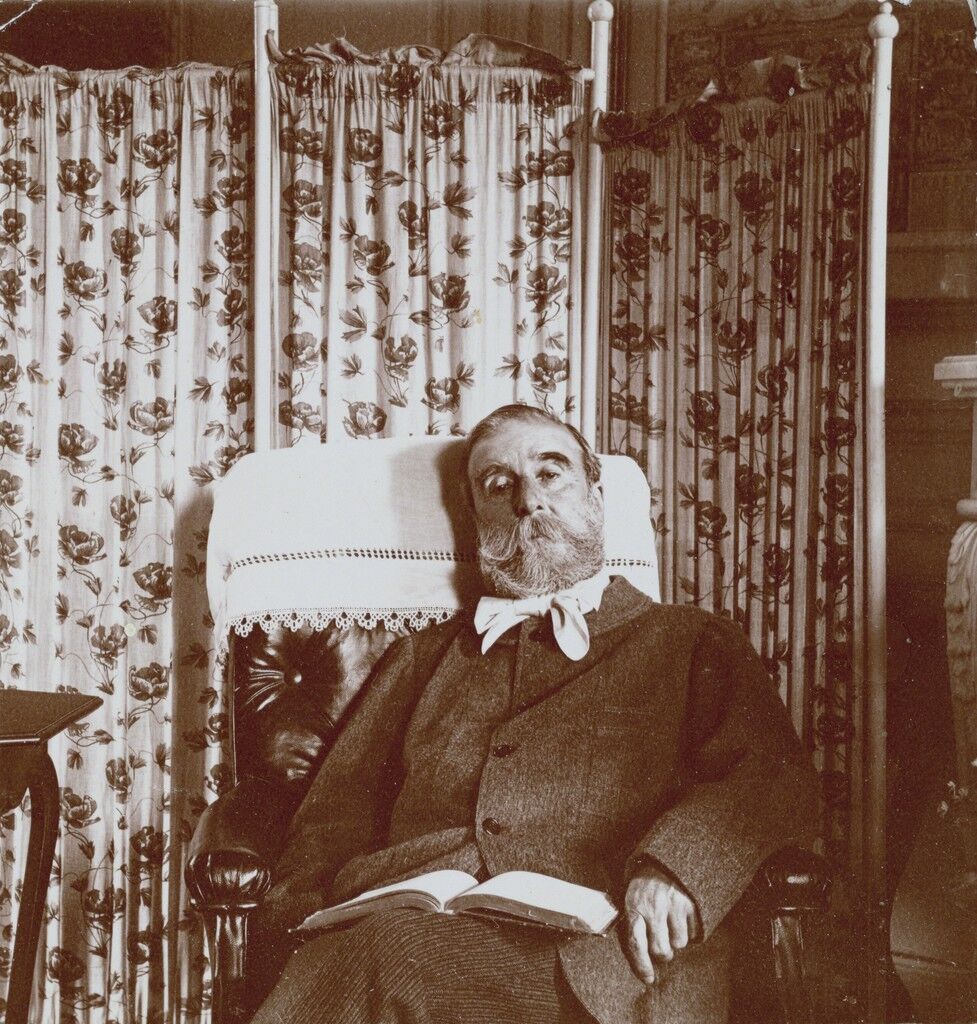 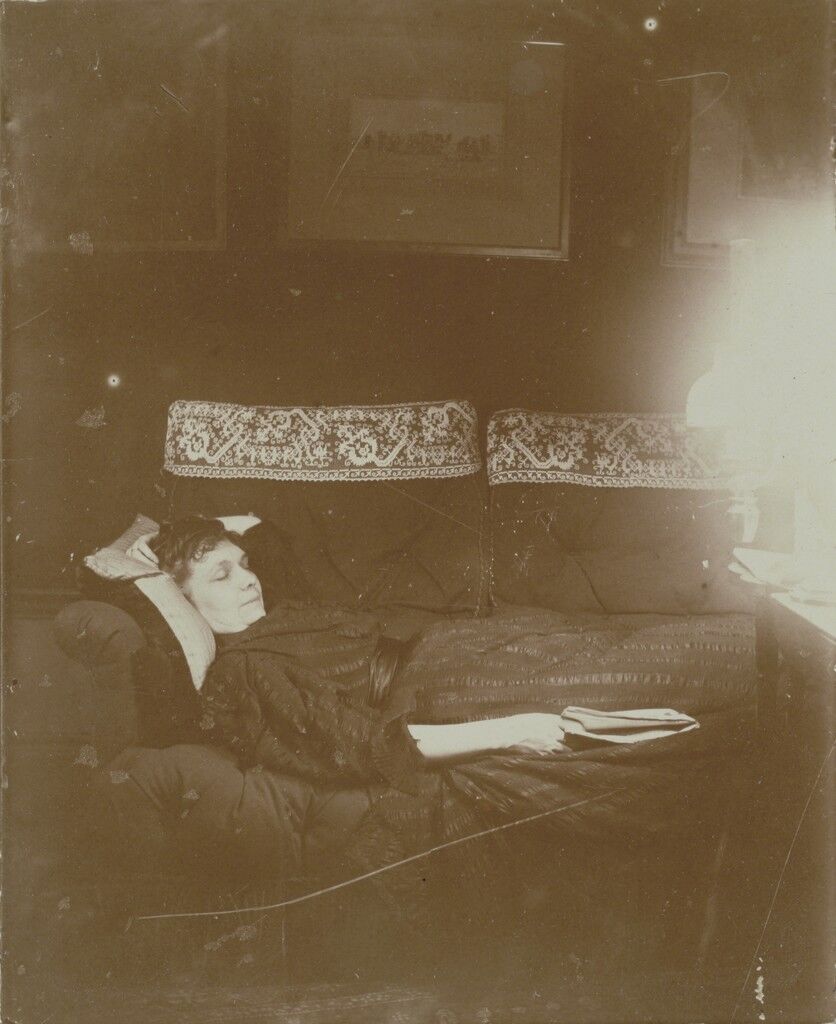 Edgar Degas
Louise Hal‚vy Reclining, 1895
J. Paul Getty Museum
In December 1897, Degas, who was known for his intransigent personality, left the Halévy home, ending decades of friendship with Ludovic. The two men took opposing stances on the Dreyfus Affair, a political scandal in which a Jewish army officer was falsely accused of passing information to the German government. Degas did not return to the Halévy home until 1908, when Ludovic lay on his deathbed, in order to pay his final respects.
Likewise, Degas dissolved his relationship with Jacques-Émile Blanche in 1903 when a full-page illustration of a portrait that Blanche had painted of an aging Degas appeared in The Studio magazine. Although Degas kept the portrait and allowed Blanche to photograph the painting for his records, he forbade its exhibition or reproduction. Upon seeing it in The Studio, Degas sent a messenger to Blanche’s house to return the offending image, and to retrieve Six Friends at Dieppe, along with some other drawings Degas had lent Blanche, essentially ending their relationship.
Alison W. Chang
Explore more work by Edgar Degas.
Related Stories