About 2,000 years ago, Medusa got a makeover.
Ancient Greek artists working during the Archaic period had originally portrayed her as an almost comically hideous figure, with a lolling tongue, full beard, and bulging eyes. These images—painted on pottery or carved into funerary monuments—brought to life the myth of the Gorgon Medusa, who lived with her two sisters on an island at the end of the world. Sporting boars’ tusks, dragons’ scales, and golden wings, their fearsome visages turned all who looked upon them to stone.
But as the Classical period flourished during the 5th and 4th centuries BC, artistic representations of Medusa began to change. Her androgynous features were increasingly feminized: Moustache stubble was replaced by smooth cheeks, fangs concealed by shapely lips. This transformation—from grotesque to gorgeous—is the focus of “Dangerous Beauty: Medusa in Classical Art,” currently on view at the Metropolitan Museum of Art.
Included in the single-room exhibition is a terracotta jar made between 450 and 440 BC, which marks one of the earliest examples of the beautiful Classical Medusa. She sleeps peacefully, her curly hair serpent-free. With the large pair of feathered wings folded behind her, she resembles nothing so much as an angel. 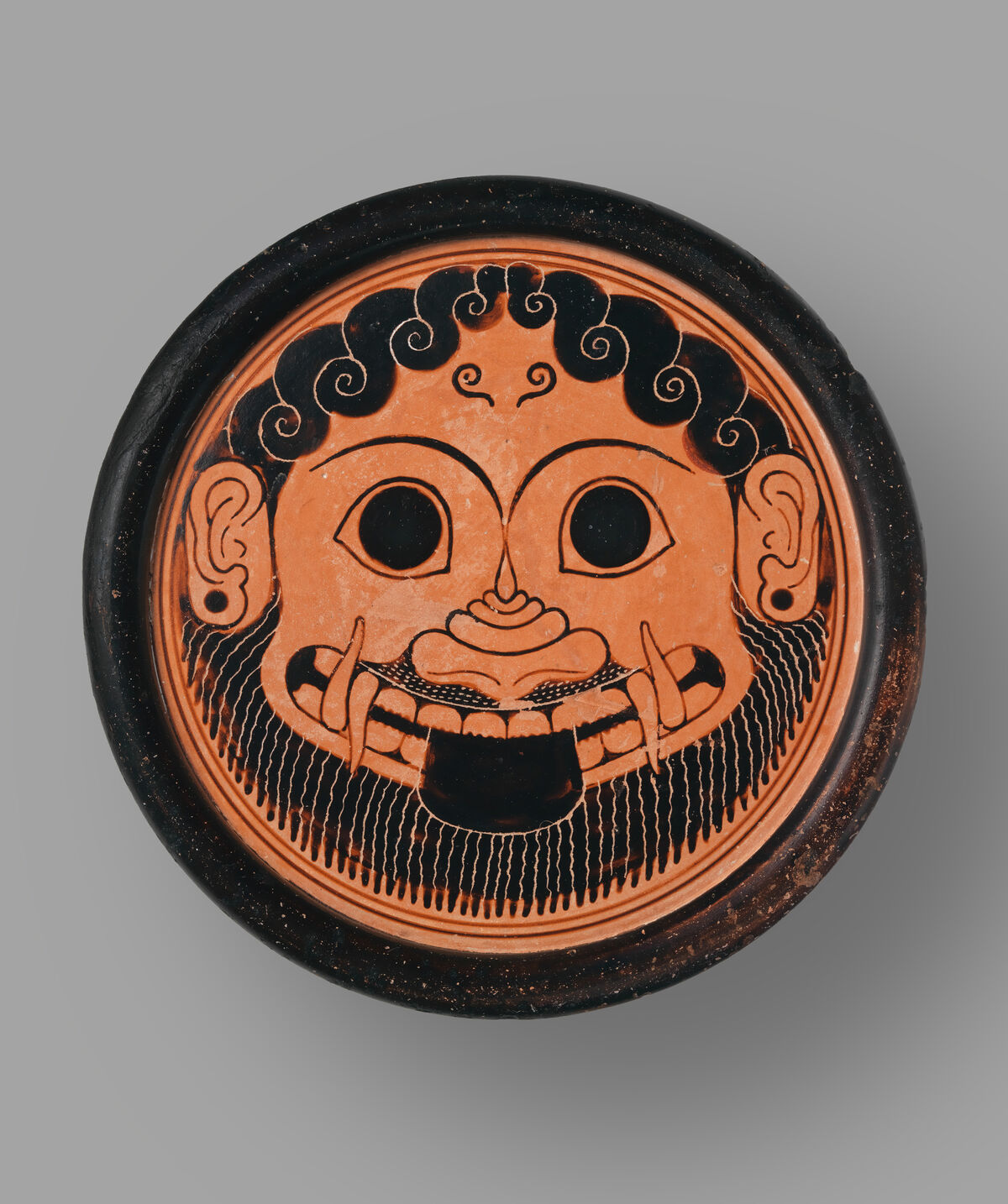 Later Roman representations began to depict Medusa’s signature snake-filled hair, but it’s often more innocuous than frightening. The metal cap of a 1st- or 2nd-century chariot pole, for instance, offers a popular visual interpretation of the Gorgon with two snakes tied neatly under her chin. “They almost look like an accessory,” noted the show’s curator, Kiki Karoglou. (None of the works on view at the Met reflect our typical contemporary image of snakes as hair, however. That innovation is credited to a young
Leonardo da Vinci
, who allegedly painted a rendition so masterful it spooked his father.)
Medusa wasn’t the only monster made over by Classical artists, either. Sirens, sphinxes, even Scylla—the sea creature who devours six of Odysseus’s shipmates in the Odyssey—were similarly beautified. This trend, Karoglou says, can be traced back to the idealizing humanism of Greek art during the period. “It’s an aesthetic preference,” she explained. “It’s not completely accurate to say that everything was beautiful—ugliness was portrayed—but it was not preferred.”
Centuries later, Hellenistic and Roman writers interpreted the myths anew. Ovid, in an attempt to explain why Medusa was the only Gorgon depicted with snakes in her hair, revised her backstory. According to his Metamorphoses, originally published around the year 8 AD, Medusa hadn’t always been a monster. Once, she had been a young woman with lovely hair who attracted the attention of Poseidon himself. But when he raped her in Athena’s temple, the goddess punished the girl by transforming her enviable locks into hideous snakes. Sympathetic artists took note, and images of Medusa became increasingly human. 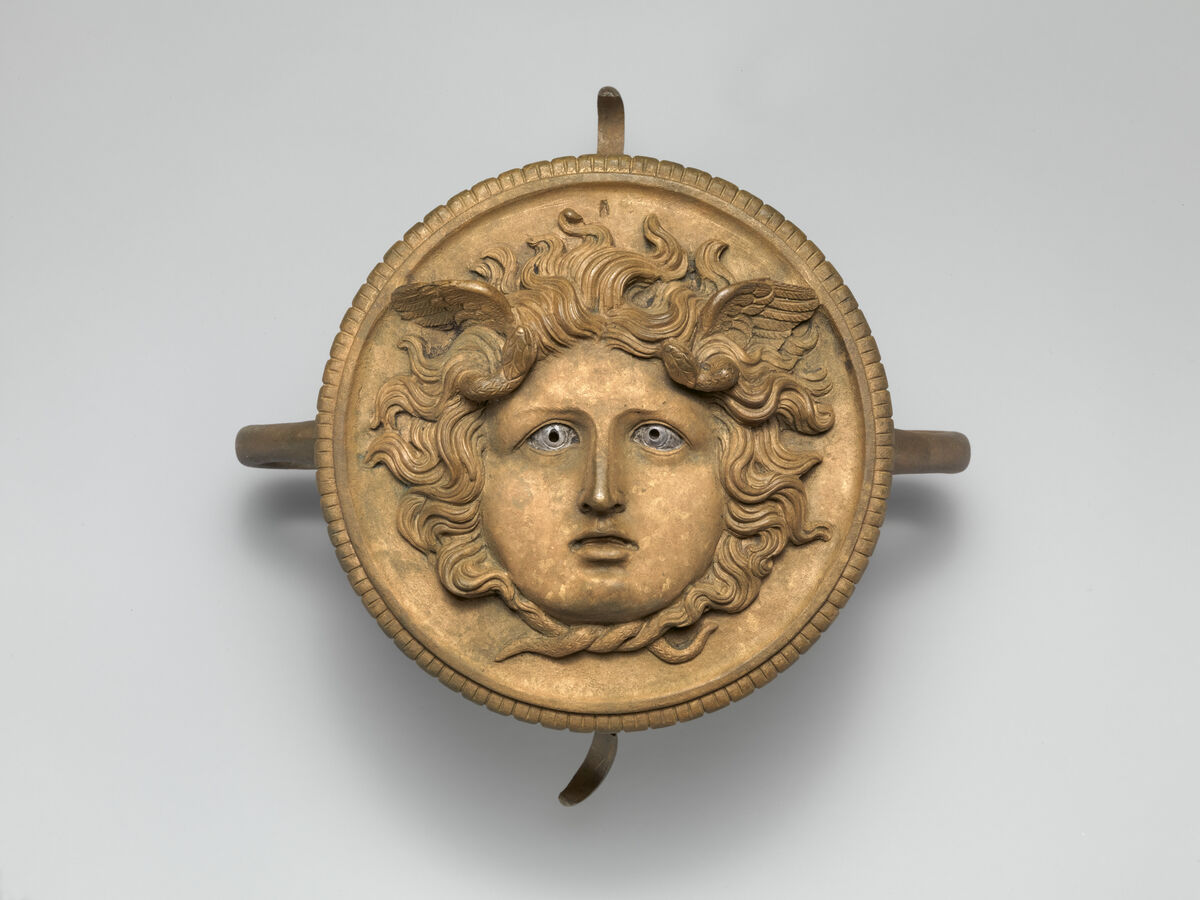 Bronze ornament from a chariot pole, 1st-2nd century A.D. Courtesy of The Metropolitan Museum of Art.

Advertisement
Yet, whether alluring or monstrous, Medusa’s ultimate fate always remains the same: She’s decapitated by Perseus. Aided by Athena, the young man uses his heavily polished shield as a mirror to avoid direct eye contact during battle. Her severed head, capable of transfixion even in death, is carted away to help him defeat the villain of his story, the king Polydectes.
Medusa’s beauty—and, in particular, her femininity—remains as dangerous as her original monstrosity. As Karoglou points out, the majority of hybrids (half-human, half-animal monsters like sirens or Gorgons) in ancient Greece were female. “In a male-centered society, the feminization of monsters served to demonize women,” she said.
These female monsters can be considered very early versions of the “femme fatale,” a trope that emerged in the late 19th century as the role of women in public life began to expand. As Karoglou writes in an essay accompanying the exhibition, “Female hybrids represent a conflicting view of femininity, one that is seemingly alluring but with a threatening or sinister underside.” Medusa was always the most popular hybrid, and remains the most identifiable even today. 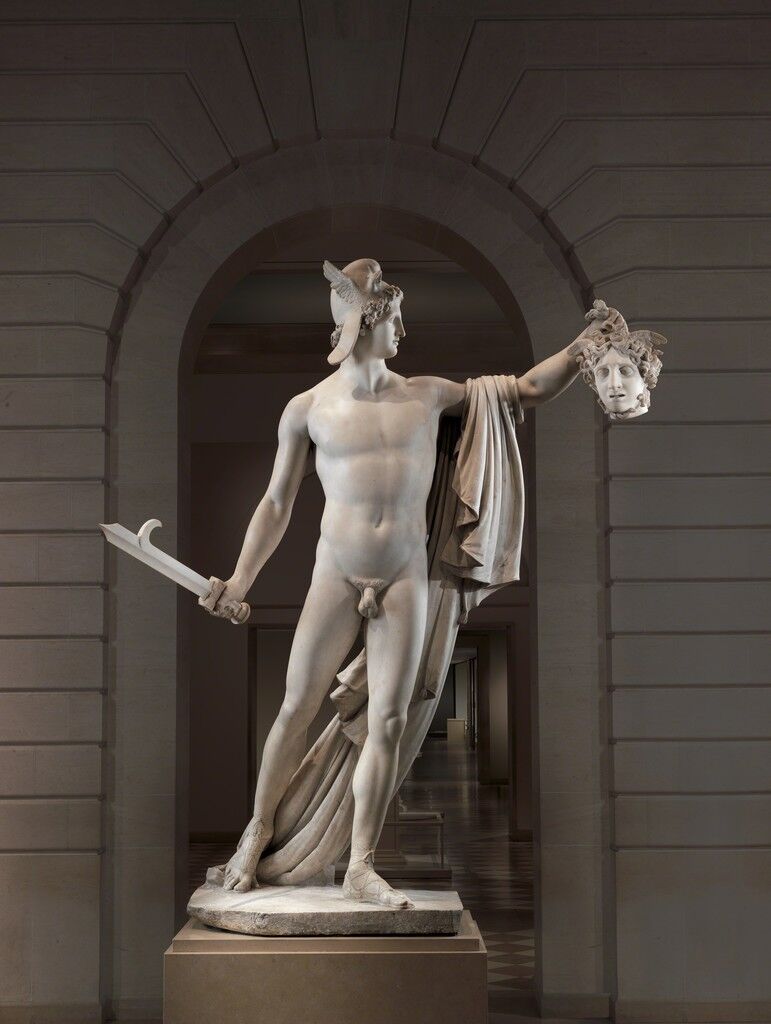 Antonio Canova
Perseus with the Head of Medusa, 1804–1806
The Metropolitan Museum of Art 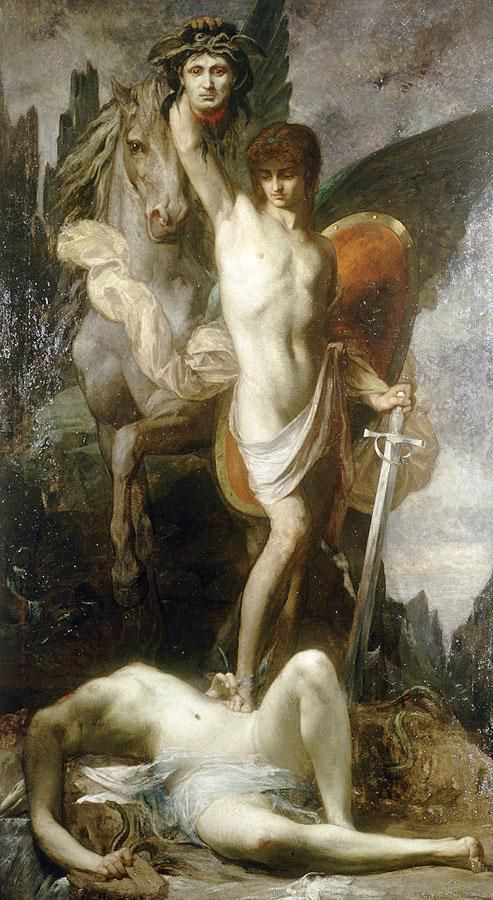 Her potency as a symbol of menacing sexuality hasn’t faded, either. In Hollywood, Medusa has most recently been played by a Russian supermodel in the 2010 remake of Clash of the Titans, and by Uma Thurman in Percy Jackson & the Olympians: The Lightning Thief, also from 2010. Both stunning women are, in the end, killed by Perseus.
In 2013, to celebrate the 25th anniversary of British GQ, Rihanna was styled as Medusa by
Damien Hirst
for the magazine’s cover. “Rihanna is bad,” Hirst says in the accompanying interview. “Bad in what sense? Badly behaved?” asks the interviewer. “Yeah, bad bad,” Hirst elaborates. “If you’re a mother, she’s a proper terror, isn’t she?”
In Hirst’s photos, the singer’s hair is a nest of snakes; her incisors have become needle-sharp fangs. Her pupils have been narrowed into snake-like slits. And in all of them, she’s naked or mostly naked, oozing seduction.
“The sex appeal is the monstrosity,” explained associate professor Elizabeth Johnston, who teaches a class on female icons—beginning with Medusa—at Monroe Community College in New York. “The sexiness is what’s dangerous. It’s the femme fatale. Rihanna is beautiful, and in those images, there’s a bestiality associated with her, too, that you also see in images of Lilith,” she said, referring to the wanton demon of Jewish mythology who often appears in 19th-century paintings.
Yet the fears embodied by Medusa are two-pronged: The sexually independent woman is dangerous, but so, too, is the politically independent one. For centuries, women in power (or fighting for power) have been compared to Medusa, from Marie Antoinette to the suffragettes. Johnston suggests an exercise: Google any famous woman’s name, from Angela Merkel to Nancy Pelosi, along with the word “Medusa.” All of them have been photoshopped onto famous renditions of the Gorgon, from
Caravaggio
’s round, shield-like painting to
Antonio Canova
’s sculpture of Perseus touting Medusa’s head.
But the most potent example comes from the 2016 presidential election, as British classicist Mary Beard described in her recent book Women in Power. Hillary Clinton’s face was Photoshopped onto
Benvenuto Cellini
’s sculpture of Perseus and Medusa, which shows the young hero trampling her body as he presents her severed head. Perseus, of course, was replaced by Trump. The resulting images were made into merchandise, printed on T-shirts, coffee mugs, and tote bags.
“It may take a moment or two to take in that normalisation of gendered violence,” Beard writes, “but if you were ever doubtful about the extent to which the exclusion of women from power is culturally embedded or unsure of the continued strength of classical ways of formulating and justifying it—well, I give you Trump and Clinton, Perseus and Medusa, and rest my case.”
Johnston has her own, more personal example of this phenomenon. During one of the first years teaching her class, in the early 2000s, she was shopping at Target during Halloween season. She stumbled across a holographic image that flipped between images of Queen Elizabeth and Medusa, depending on the angle you held it. “It’s a metaphor and a literalization of what I talk about in my icons class,” she said, “how all women who are powerful in the public imagination have placed onto them images of monstrosity, or are imagined as monstrous underneath their exterior appearance.”
She bought it; years later, it still hangs in her office. The hologram might be modern-day technology, but the message is ancient.
Abigail Cain
Related Stories