At Pioneer Works, Derrick Adams Takes Characters out of the TV Screen and into Real Life 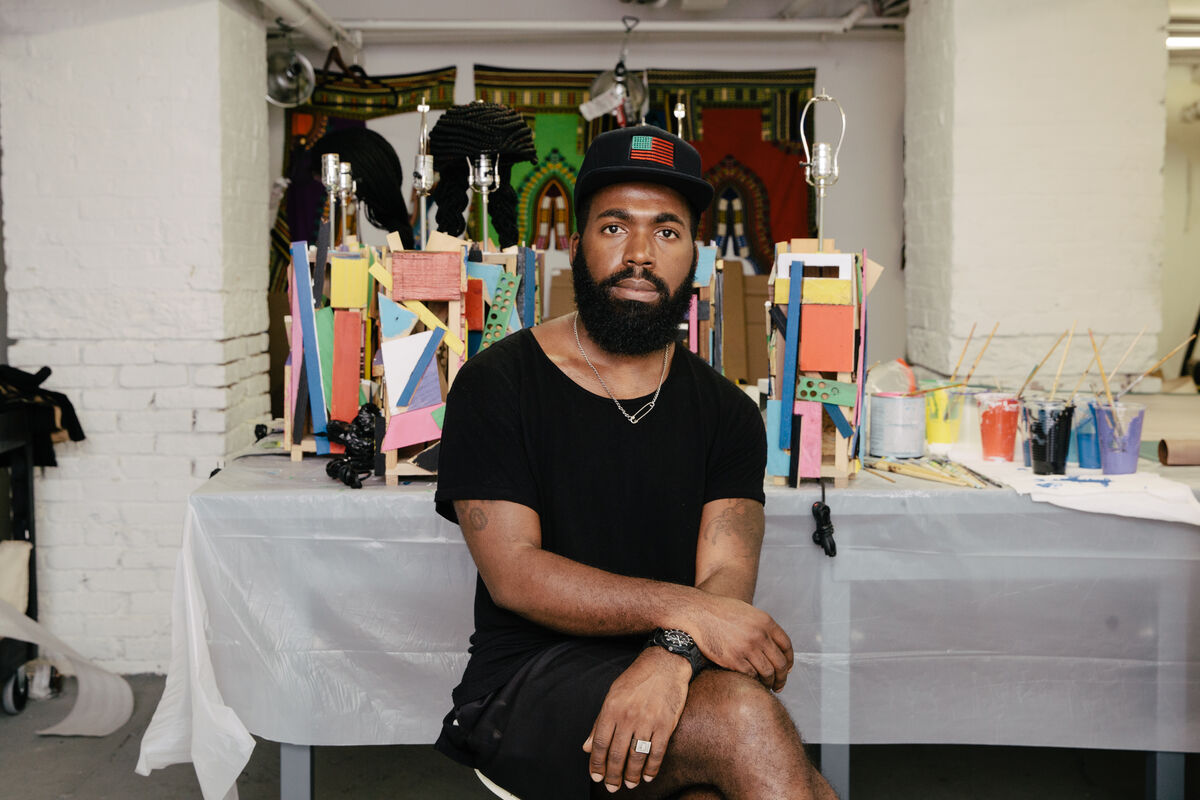 “The reason I don’t watch a lot of TV,” says the artist
Derrick Adams
, “is because I kinda know what’s gonna happen before it happens, and that takes the fun out of it as a critical thinker. If there’s a mysterious, spiritual character, it’s always the older black man or woman—who’s probably blind or something. Think of The Matrix.” He laughs at the image. We’re sitting in Adams’s subterranean Crown Heights studio, next to a table on which are perched a series of lampshades ensconced in colorful wooden blocks and wearing braided West African wigs. Dressed up like humans, the lampshade-figures feel considerably less stereotypical and more idiosyncratic than a stock character such as The Matrix’s Oracle, played by African-American actress Gloria Foster. These will travel to the nonprofit art space Pioneer Works, in New York’s Red Hook neighborhood, this week to form part of Adams’s solo show there, titled “ON,” opening June 10th.
Adams’s collages, performances, and videos have long been filled with black characters that play on the types found in popular culture—particularly those drawn from advertisements and 1980s and ’90s American television shows like In Living Color. Screenshots from those shows have formed the basis of many of Adams’s cartoonish, mixed-media collages depicting figures pieced together from fragments of various busy and patterned fabrics, including those cut from West African dashikis, and framed by the outline of a vintage TV. Though Adams refrains from watching too much television, he is deeply interested in its language. “The TV frame is a relationship to history,” says Adams, “and the history of television. To me it’s the same as using a baroque frame.” 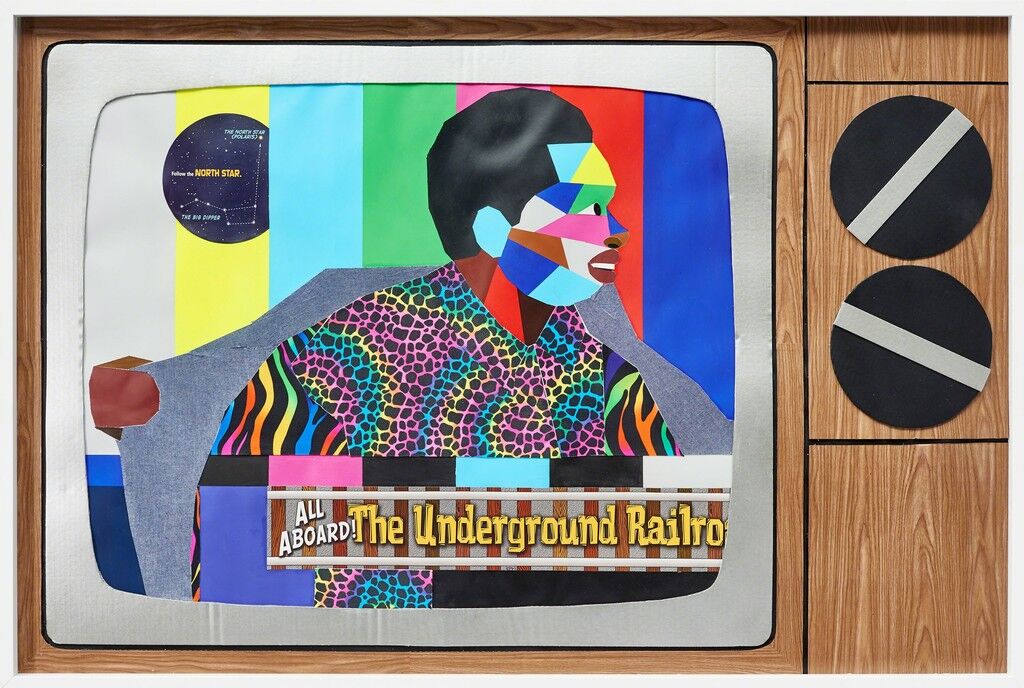 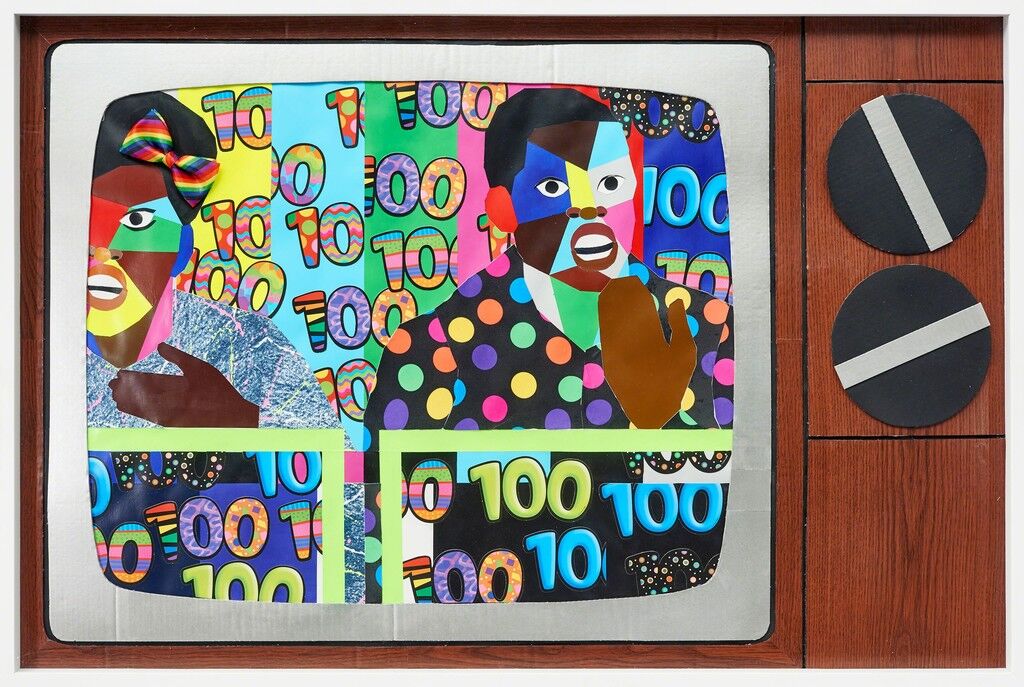 Derrick Adams
This Could All Be Yours, 2015
Goodman Gallery
The artist draws not only from characters projected in the media, but also from those he encounters in life. “I’m always around very dramatic people,” he says. “When people say ‘Am I being too much?,’ I say ‘No, not at all!’” When his show opens to the public, it will include both his collages and lampshades (“I’m thinking of them as nine women,” he says), as well as a cohort of 13 performers.
The actors, comprised of the artist’s friends and associates and led by Adams, will bring the characters of his two-dimensional works to life. They will be engaged in hawking comedy-prop products, such as boxes with “More for Less” emblazoned across them. Recordings of these performances will then be projected onto the walls of the space throughout the duration of the show. “Unlike TV, where you play by the script,” he explains, “I want them to create the script in the space.” Advertisement
Adams grew up in a large, musical family, full of women, in Baltimore. His uncle, a commercial artist, encouraged him to draw from an early age. “I always wanted to be an artist,” says Adams. “Even in elementary school I was making the posters for holiday events. They would pull me out of a class to make sure that they had a big banner to walk in and see in the morning.” A teacher recognized his talent early and began entering him into art contests. This culminated with Adams winning a competition titled “My Heritage, My Self” with a painting of an African-American family playing with their kid at home, below another painting of a traditional African village of people doing the same thing. The work was framed and hung in the Baltimore mayor’s office.
An interest in signage and posters, and how the subliminal codes of advertising and visual culture creep into one’s conception of identity, would continue into Adams’s undergraduate years at Pratt. There, he switched his degree from Art to Art Education, and went out into the New York public school system, where he discovered outdated images and posters about American history still in wide use as pedagogical tools. “These images, that are part of their visual language, totally contradict what’s going on in the real world. To me it became so troubling because it takes time for people to re-educate themselves. Something becomes true to them based on just being inundated with seeing it. They become familiar with it.” 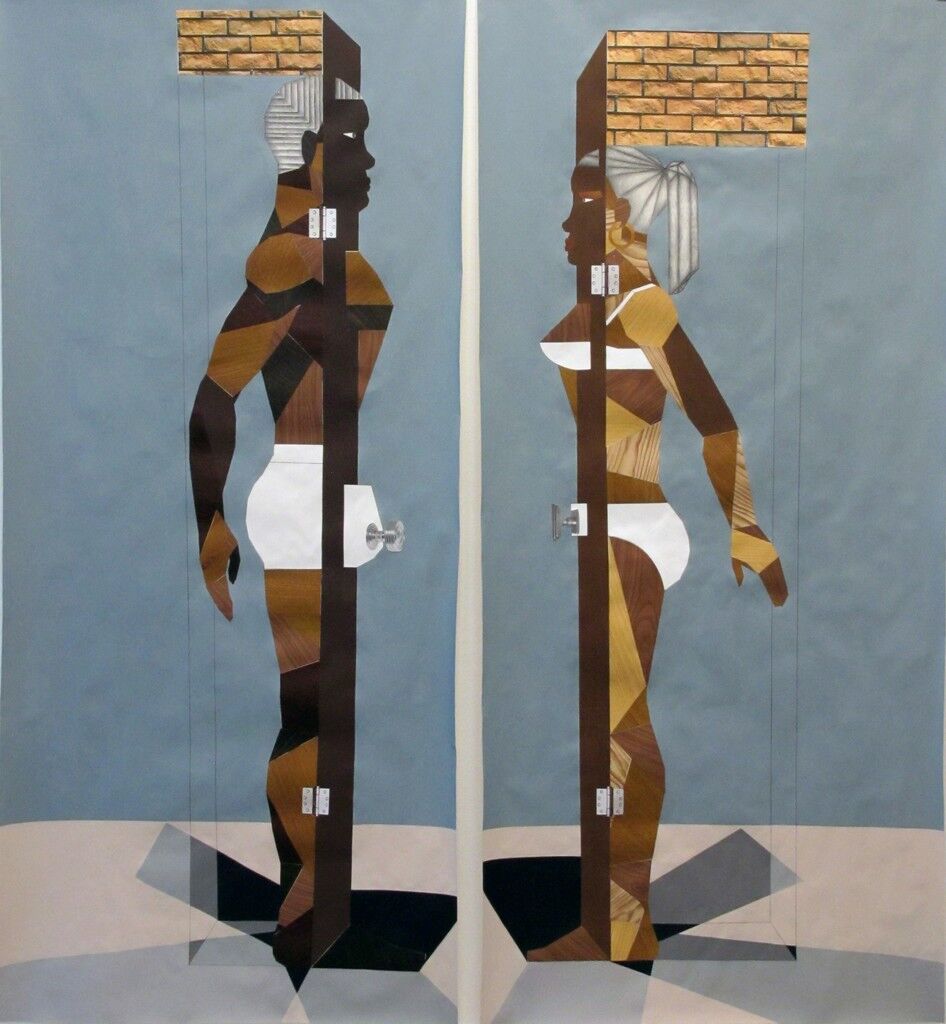 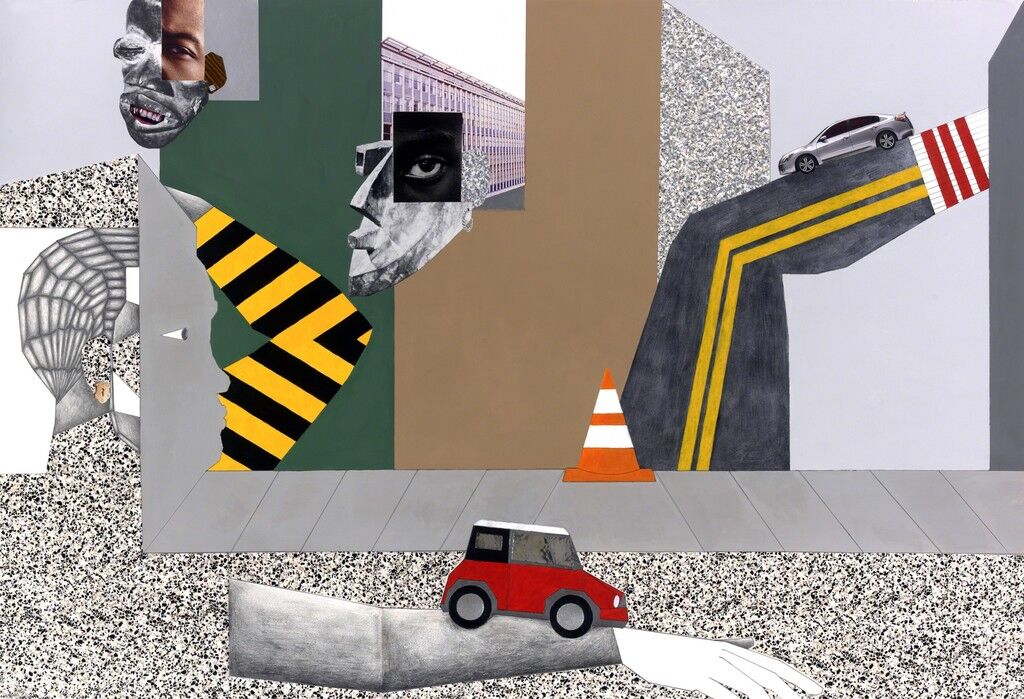 Derrick Adams
Human Structure Grounded, 2011
Rhona Hoffman Gallery
Now, following an MFA degree at Columbia, where he was profoundly influenced by the work of
Bruce Nauman
, and some 10 years working as a multimedia artist, Adams is in the business of creating images that put a twist on the familiar, revealing the artifice in cultural and racial stereotypes. Over the past five years, he has produced numerous collages of heads and bodies fabricated from disparate parts of cloth, paper, and other media, or that appear to be embedded within the architectures of modern environments.
His interest in what he refers to as the “structure” of identity will be on view at Pioneer Works through rooms that represent our “projected” and “reflective” selves, as he explains. While the main space will serve as a stage for his performers, embodying a television set amped up to full volume, two quieter, meditative rooms—one with an ambient sound element, the other containing his women-lamps—will provide the opportunity to escape the fuzz of Adams’s fictional television sets and contemplate a more centered experience of the self. He hopes that the immersive, accessible quality of the show will draw in viewers outside of the art world. At the heart of this concern, and of Adams’s practice as a whole, is a deep interest in community. He tells me he regularly gets lost in long conversations with strangers on the street in Brooklyn and Manhattan, the real-world counterparts to the characters with which he fills his compositions. He aims to cultivate these types of interactions at Pioneer Works through the loose format of the show. “I don’t want the performers to feel any obligation to a particular approach,” he says. “You’re ON—so go out there and do whatever you’re gonna do.” For Adams, the joy of community lies in the kind of unexpected interaction one can’t have with a television set.
Tess Thackara
“Derrick Adams: ON” is on view at Pioneer Works, Brooklyn, Jun. 10–Jul. 17, 2016.
Related Stories