What You Need to Know about Memphis Design Pioneer Ettore Sottsass

Alexandra Alexa
Jul 17, 2017 3:45pm
If you know the name
Ettore Sottsass
, you’re likely to associate it with
Memphis
—the design collective he spearheaded in the 1980s, which remains one of his most well-known achievements. But the true force of the designer’s character is much bigger than any single movement and was refined throughout various moments of his career. Sottsass was always motivated by a desire to reach deeper beneath the surface of the objects he designed, and to bring out their poetry.
On the occasion of a major retrospective of his work at the Met Breuer, we look back on his career and reflect on the wide-ranging impact he’s had on the design world.

Who was Ettore Sottsass? 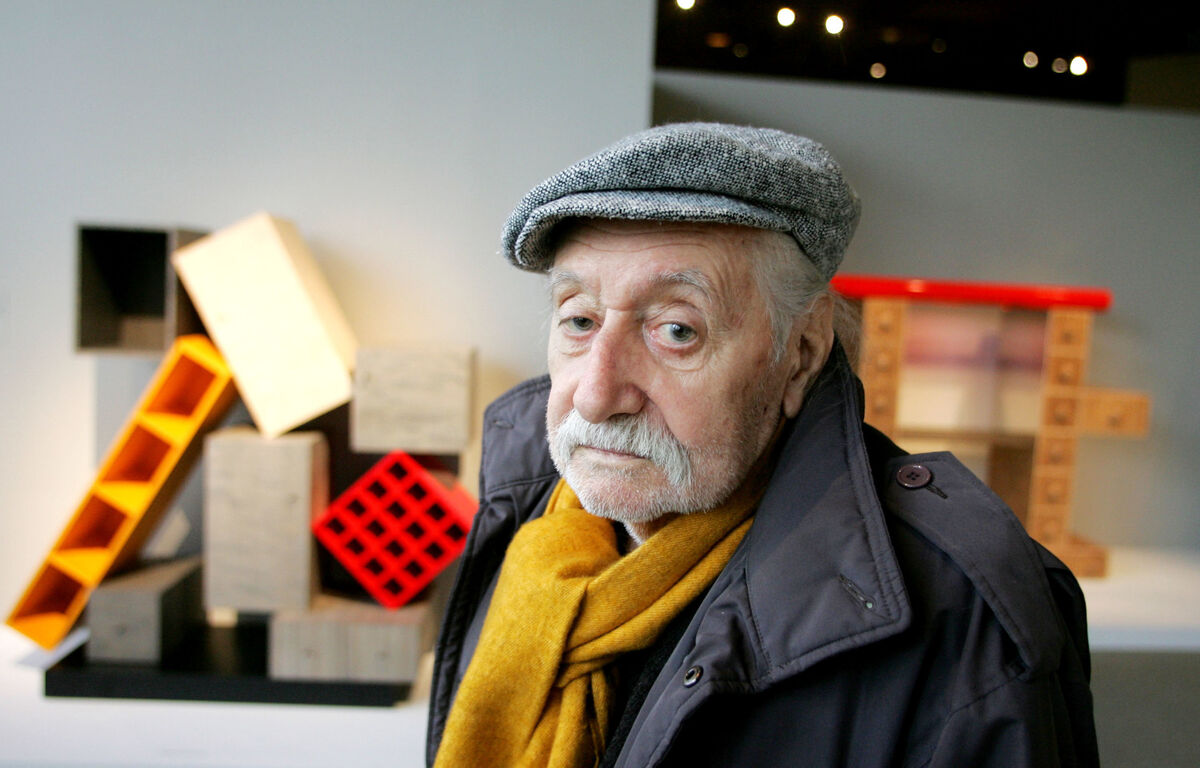 Sottsass was born in the mountain town of Innsbruck, in his mother’s native Austria, in 1917. His father, Ettore Sottsass Sr., was an architect. Early on the seeds of the craft were planted in the young Sottsass, who would watch his father work with fascination. In 1929, the family moved to Turin, Italy, where Sottsass Sr. had the promise of better jobs and where Sottsass Jr. could attend the prestigious Politecnico di Torino. After graduating in 1939 with a degree in architecture, he dutifully joined the Italian military during World War II.
When Italy switched over to the Allied forces in 1943, many Italian soldiers, including Sottsass, were captured by the Germans. He lived out the rest of the war in a concentration camp in Sarajevo, where his native German tongue came in handy, and he survived by being put in charge of the camp’s food store.
In 1946 he moved to Milan, where he curated an exhibition for the Triennale and started contributing to the design magazine Domus. A decade later, he visited New York for the first time and worked with designer
George Nelson
—an experience that led him to shift focus from architecture to design.
After a month in the U.S., he returned to Italy where he worked as an art director for design company Poltronova. In 1958, he took a job in the electronics division of Olivetti, an Italian typewriter manufacturer founded in 1908 and known for its attention to industrial design. That position would lead to some of his most iconic designs, like the Elea 9003 mainframe computer and the Valentine typewriter. In the mid-1960s, Sottsass designed a series of plastic laminate cupboards called “Superboxes” for Poltronova, which, with their bright colors and totem-like form were an early precursor to his Memphis days. His work became increasingly more experimental and postmodern, as exemplified by his proposal for a mobile, multi-functional furniture unit that was exhibited in MoMA’s “Italy: The New Domestic Landscape” exhibit in 1972. 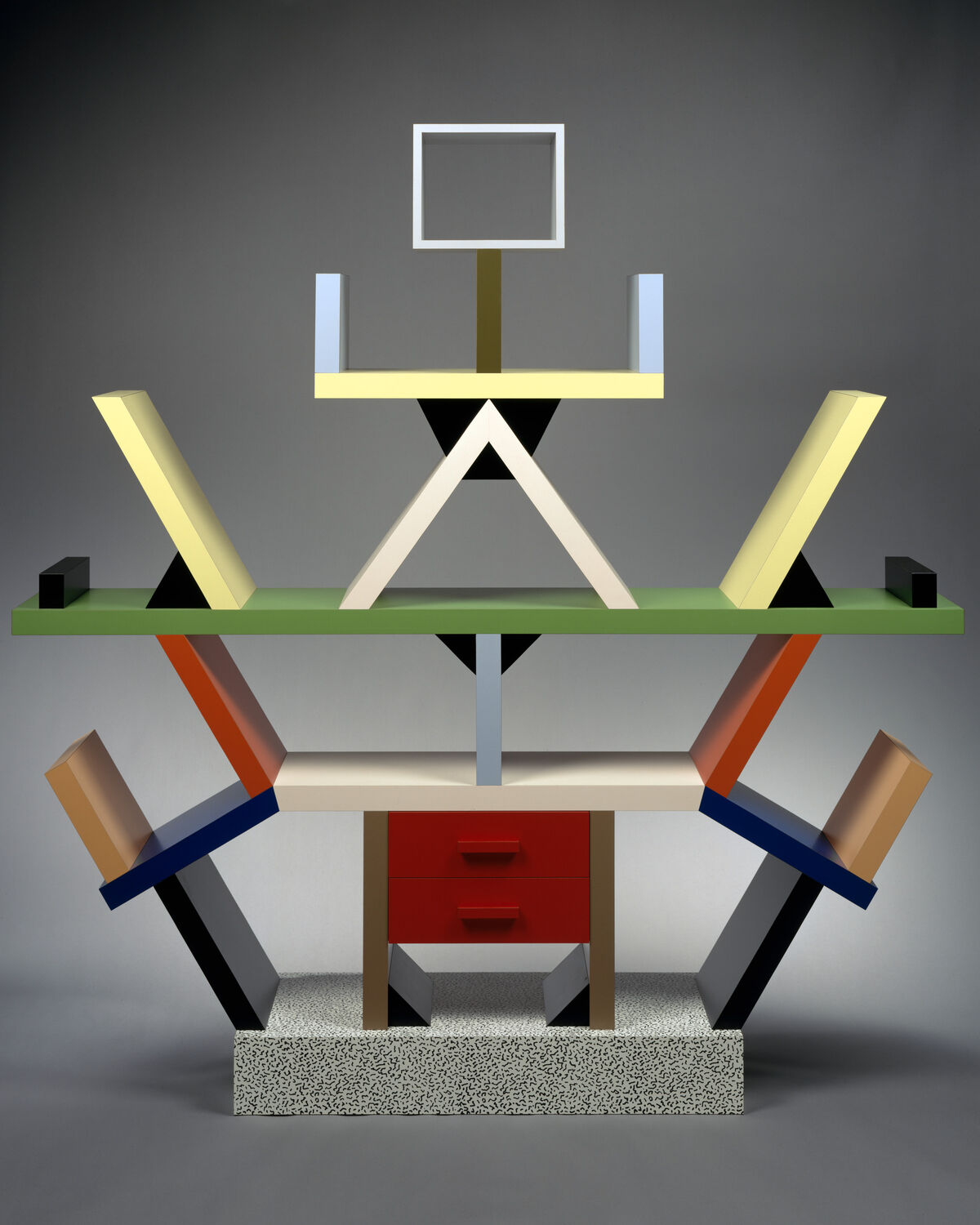 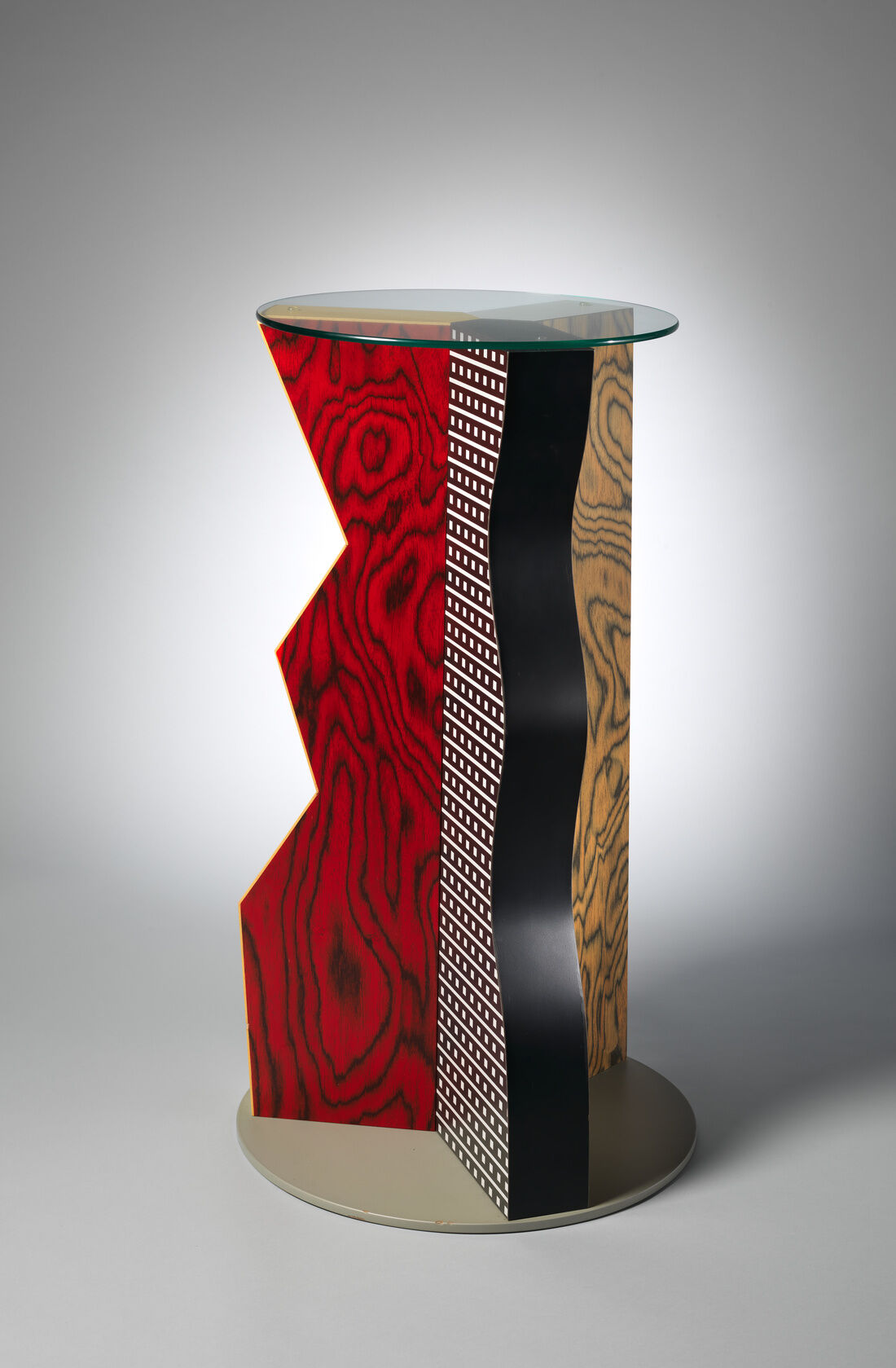 Advertisement
In December 1980, Memphis was born when a group of designers got together in Sottsass’s small Milan apartment. They had been listening to Bob Dylan records, and the group’s cheeky name is in part a reference to his song, “Stuck Inside of Mobile with the Memphis Blues Again,” as well as the ancient capital of Egypt and the modern city in Tennessee. Though Sottsass has been considered the group’s leader, that is not a position Sottsass would have wanted to take on. “He detested any type of institution or hierarchy,” the designer’s widow, Barbara Radice, once noted. “He didn’t like anything that told you what to do. He believed everybody should find their own way of doing things.” From its debut at Milan’s 1981 Salone del Mobile, the movement generated sent ripples through the design community. In 1982 in New York, Sottsass organized the first stateside exhibition of Memphis, titled “Memphis at Midnight,” which opened to an eager crowd of over 3,000 people waiting to cram inside the Chelsea loft showroom where the works were displayed.
The Milan-based collective of designers—including
Michele de Lucchi
,
George Sowden
and
Nathalie du Pasquier
—banded together to challenge the rationalist design principles they had been taught. They employed unexpected forms, bold colors, graphic patterns, and cheap materials—like plastic—to forge a new approach to design. If there was such a thing as a “Memphis style” it was characterized by an attitude more than anything else.
Sowden once said that the scope of Memphis “consists of broadening the area of style itself, of never being satisfied with what has already been done, and of looking for a new style all the time.” Though the work coming out of the designers’ studios was met with both repulsion and fascination—and was never a major commercial hit—its concepts and attitude ended up being a dominant force in the design world throughout the 1980s.
Sottsass left Memphis after a few years in 1985 and founded his own practice, Sottsass Associati—a firm that continues to operate today—and his focus once again turned to architecture, with projects like the design of Milan’s new Malpensa airport in 2000. Though Sottsass tended to describe himself as first and foremost an architect, he was something of a “Renaissance man.” He was also an industrial designer, a painter, a writer, a curator, and a photographer. He saw life as continuous, and every element of his practice was part of a much larger whole. 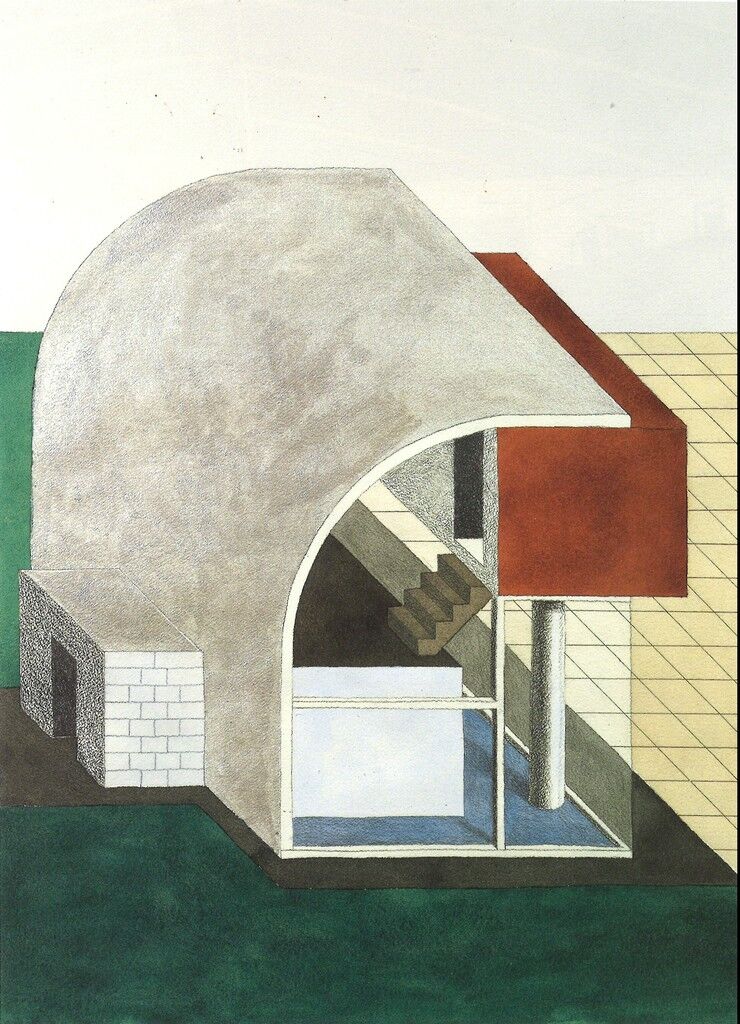 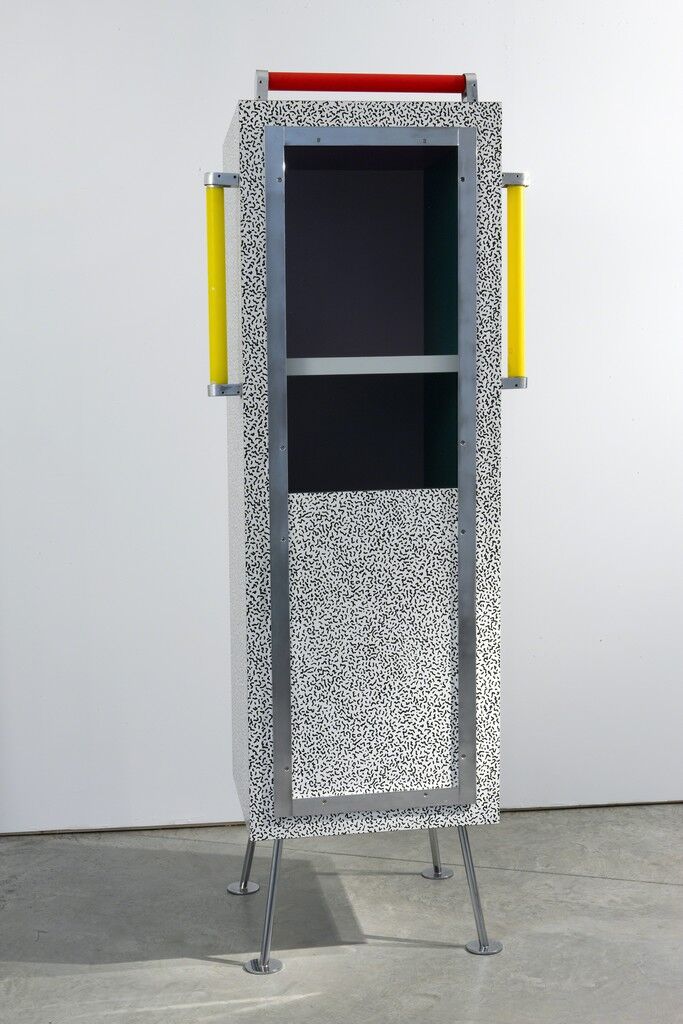 Ettore Sottsass
Vetrinetta di Famiglia Cabinet, 1979
Friedman Benda
If one characteristic defined Sottsass more than others, it was his insatiable curiosity. He drew inspiration from a spectrum of sources, like literature, anthropology, ethnology, geography, and archaeology. He was an avid photographer and took thousands of images everywhere he went—from details of walls and doors to the beds he slept in. Part of an impressive social circle, he took portraits of luminaries like
Bob Dylan
, Pablo Picasso,
Max Ernst
, Chet Baker, and
Robert Mapplethorpe
.
His photography was fueled by another one of his passions: travel. “I believe you travel to confirm your ideas, and whatever you can’t confirm you discard as you travel,” he once said in an interview with Hans Ulrich Obrist. “In a certain sense, you redesign yourself when you’re traveling.” He spent time with the Beat writers in California, went on a tour of Italy with
Allen Ginsberg
, and travelled extensively to India—a country that left a spiritual imprint on the designer. “In India I found very strongly a sort of dimension of sacrality. Every object could become something so related to your life that it becomes [part of] your vision of la sacralità [the sacred],” said Sottsass.
Throughout his work, color played a critical role and was an ongoing preoccupation. He didn’t approach color with scientific rigor, but rather he was captivated by its ability to evoke memories and emotions. Red was important to him not just because it carried a bold presence, but for what it symbolized. Red is “the color of the Communist flag, the color that makes a surgeon move faster and the color of passion,” he would say. Design historian and Sottsass biographer Deyan Sudjic recounts a memory about his time in Montenegro, where the designer was making watercolors based on colorful textile patterns. “One day he was out there but didn’t have any paint left, so instead, he described every color,” Sudjic writes. “There were 30 of them and he used a different word for each one—amazing.”

What makes his approach to design different? 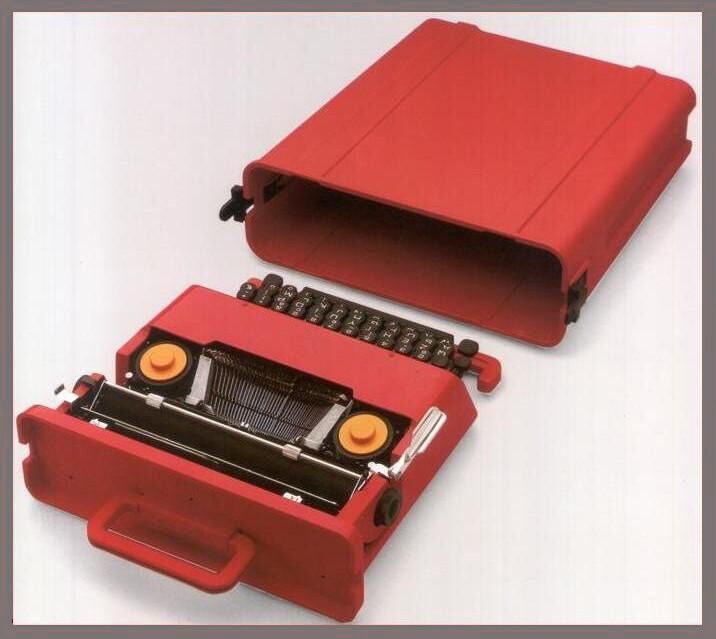 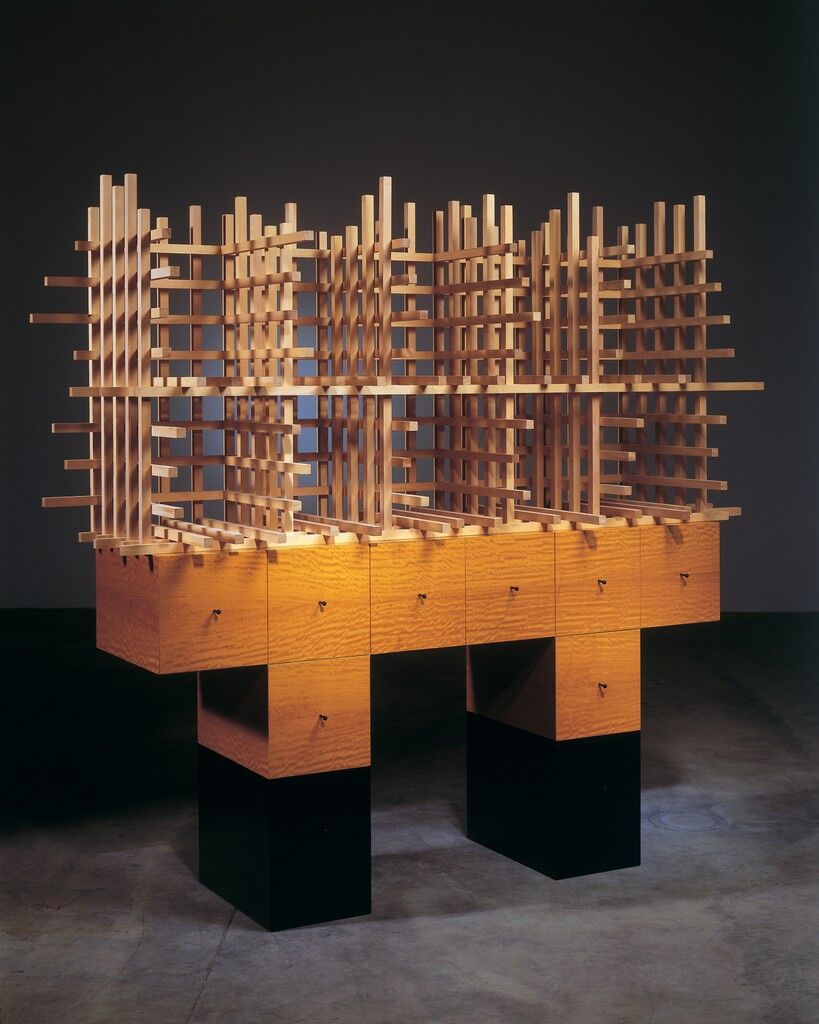 Ettore Sottsass
Cabinet no. 69, 2006
Friedman Benda
“We read the world sensuously,” Sottsass once noted. “We also catalogue it and intellectualize it, but the source of everything remains the senses. To a Functionalist, the surface of this table is a geometrical square; to me, it’s a piece of plastic, warm or cold.”
For Sottsass, designing was a more complex endeavor than just building a house or creating a new consumer object—it was about achieving a deeper connection to the world around us. “Ettore thought that design should help people become more aware of their existence: the space they live in, how to arrange it and their own presence in it,” explained Radice. “That was the core of Ettore.”
Take, for instance, his infamous, bright red Valentine typewriter for Olivetti. He described it as a tool to be used anywhere but an office, “so as not to remind anyone of the monotonous working hours.” Rather, he envisioned it to be used “to keep amateur poets company on quiet Sundays in the country or to provide a highly colored object on a table in a studio apartment.” He called it “an anti-machine machine” and “an unpretentious toy.”
His focus was not on the technology of the machine but on how the person using it would be made to feel. Every detail is tactile and invites interaction: The light, plastic shell is chamfered at the corners to reduce its visual weight, the surface is finished with a matte texture that evokes leather grain, the two typewriter spools on the inside are finished with an orange lid that has a circular tip at the center—a slight suggestion of a nipple, which adds an unexpected hint humor.
Writing in Domus magazine in 1963, Sottsass described his approach to design as a search for exuberance: “I have tried as best as I can to gather together the terms of a new vitality and, where and how I was able, to collect the shapes, colors and symbols that could represent the change in the images of this century from an intellectual organization to a reality that must be lived, to a kind of pure and vital energy.”

Why are we still talking about him? 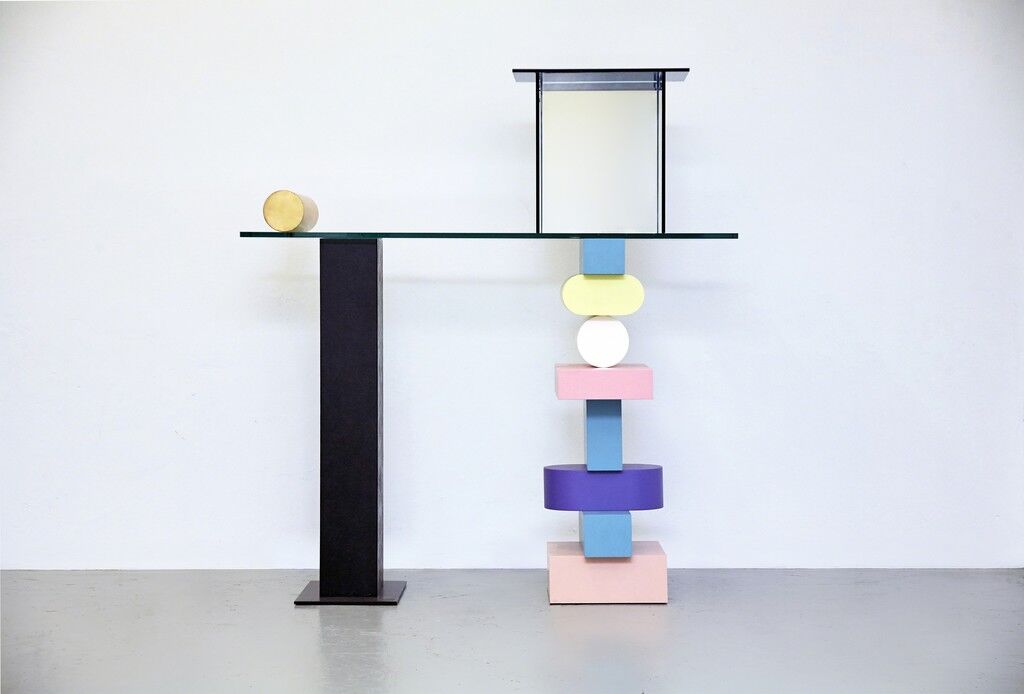 Ettore Sottsass
Ettore Sottsass Solitaria Console, 1992, 1992
DADA STUDIOS
When Steve Jobs declared in 2000 that the new Mac computer would launch with on-screen buttons that “look so good, you’ll want to lick them,” he may well have revealed the impact of a design philosophy like Sottsass’s on the company’s design aesthetic. Recent years have witnessed a resurgence of Memphis, with reissued pieces being sold for prohibitive price points, and the group’s ethos has found its way into the work of contemporary designers and artists.
Sottsass developed a series of iconic objects that transcended their physical characteristics: They were full of symbolism, global and historical references, and had the ability to appeal to their users’ emotions. In a recent biography, Sudjic describes Sottsass’s life-long project as an exploration of “the tension between the ostensible commercial purpose of an industrial object, and its ability to be shaped in such a way as to call into question the values and the culture of the society that brought it into being.”
Perhaps the biggest gift Sottsass gave us throughout his varied career was the ability to think more deeply and in different ways about the material world we live in.
Alexandra Alexa
Related Stories