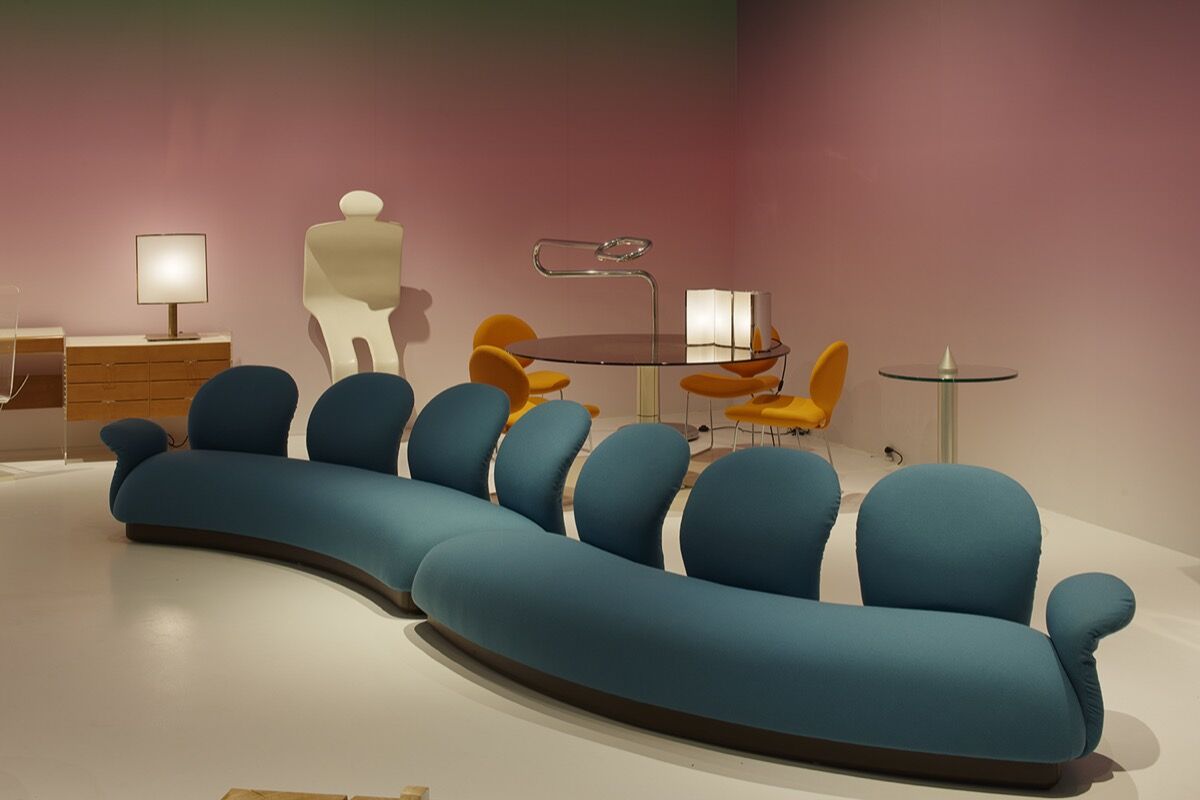 Like a Florida palm, Design Miami is growing by the year and casting its shade over an ever-increasing array of galleries and special projects. Now in its 13th edition, the fair hosts 34 galleries from nine countries. Just a short walk from Art Basel in Miami Beach and across the road from the city’s lush botanical garden, Design Miami has become not merely a satellite event but a collecting destination in its own right.
That image of a sheltering palm tree stuck in my mind as I explored the fair. Although physical shelter is usually the purview of architecture, other sorts of design can also act as a haven, a response to an imperfect world that isn’t always fair, safe, or kind to us.
It’s with this in mind that this year’s Panerai Design Miami/ Visionary Award was given during Tuesday’s preview to the Mwabwindo School, a collaborative project that brought together artists, designers, and architects to build a school in an underserved region of southern Zambia. The project’s aims are holistic: not only to build a school, but also to provide the surrounding community with improved infrastructure and medical services.
When Annabelle Selldorf, founding principal of the New York-based Selldorf Architects, spoke about her firm’s participation in the project, she had a pointed bit of advice. “I’d like to encourage everyone to start building schools in America,” she said. In other words, create change in your own community; find ways to shelter the people around you. This theme seemed to thread through this edition of Design Miami in various permutations. I wondered again and again: How can design be a haven? 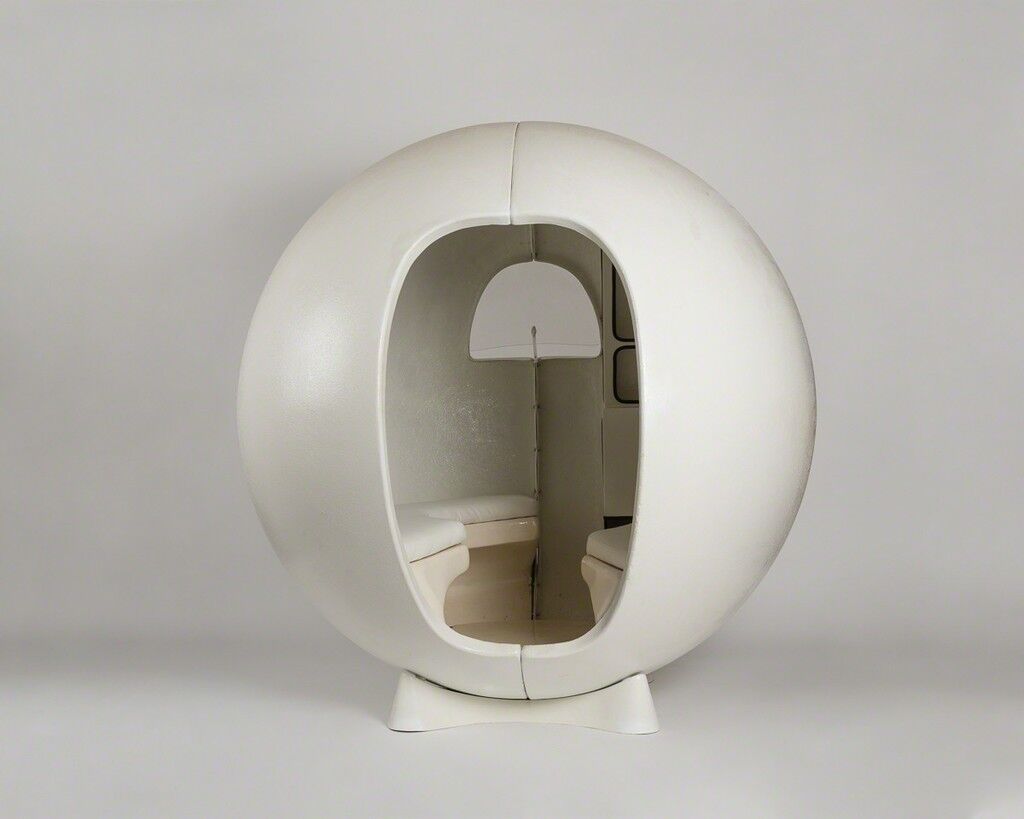 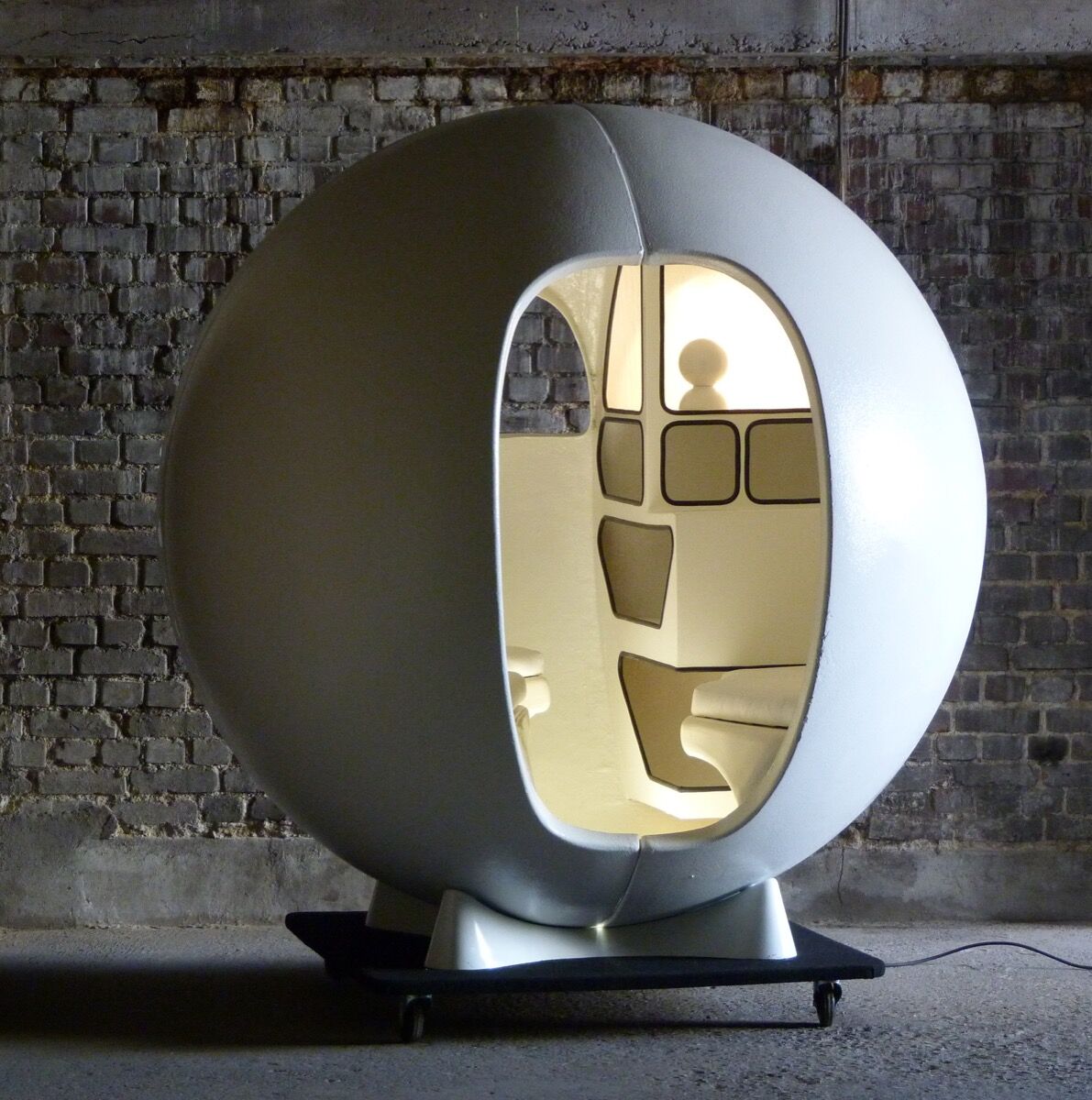 The most literal such safe space can be found at the Maison Gerard booth in
Maurice-Claude Vidili
’s pod-like Isolation Sphere (1971), a nearly six-foot diameter spherical shelter, complete with leatherette benches and ambient lighting. Designed by Vidili in 1971 as a quiet environment to stimulate creative thinking, its appeal has only increased in the era of terrifying breaking news alerts and Twitter trolls. (Naturally, the sphere has been retrofitted so that you can charge your smartphone inside while enjoying total isolation.) One of only a few left in existence, the comforts of Isolation Sphere can be yours for $195,000.
If your ideal shelter runs more toward California
modernism
, Design Miami first-timer Converso is a must-see. A quiet stunner, the living room set on offer was designed by Swiss-born architect Albert Frey in 1949. This set, along with Frey’s other works, came to define the Palm Springs aesthetic. The humid Miami air all but evaporates in New York and Chicago-based Converso’s booth, where it’s all sandy, white-washed woods. The set’s low-slung proportions suggest a more hospitable set of
Donald Judd
boxes. In the fair’s opening hours, Design Miami’s chief creative officer, Rodman Primack acknowledged that devoting an entire booth to a single designer can be a risk, but in Converso’s case, at least for visitors, the payoff is a breath of fresh, sun-warmed air. Advertisement
At Cristina Grajales Gallery, which has been at Design Miami since year one, twin brothers
Doug and Mike Starn
have given their Big Bambu project a new shape. It’s a suite of what I’ll call ‘locations for sitting’, since the pieces’ shapes defy the typical categories of chair, couch, or chaise. Constructed from bamboo and knotted rock climbing cord, the pieces are airy, yet their size gives them imposing power. One piece, a sort of wing chair on steroids, is seven and a half feet tall; sitting on it feels like being ensconced on a throne, and for a moment I felt powerful too. The collection, which sells for between $40,000 and $90,000, brings the same sort of controlled chaos to the domestic sphere as the brothers did to their installation on the roof of The Metropolitan Museum of Art in 2010.
Across the tent, R & Company’s presentation favored chaos over control, with a riot of colors, shapes, and textures that bring to mind the psychedelic fancies of Dr. Seuss. I cautiously entered the booth via a peculiar portal: an arched wooden door designed by
The Haas Brothers
. On the outside, mustachioed walruses in bas-relief; on the inside, octopuses. Although the immediate effect is extremely silly (the animals wear befuddled expressions and have pendulous breasts or conspicuous penises), the virtuosity of the woodcarving and the sheer weight of the door makes crossing its threshold feel strangely profound. 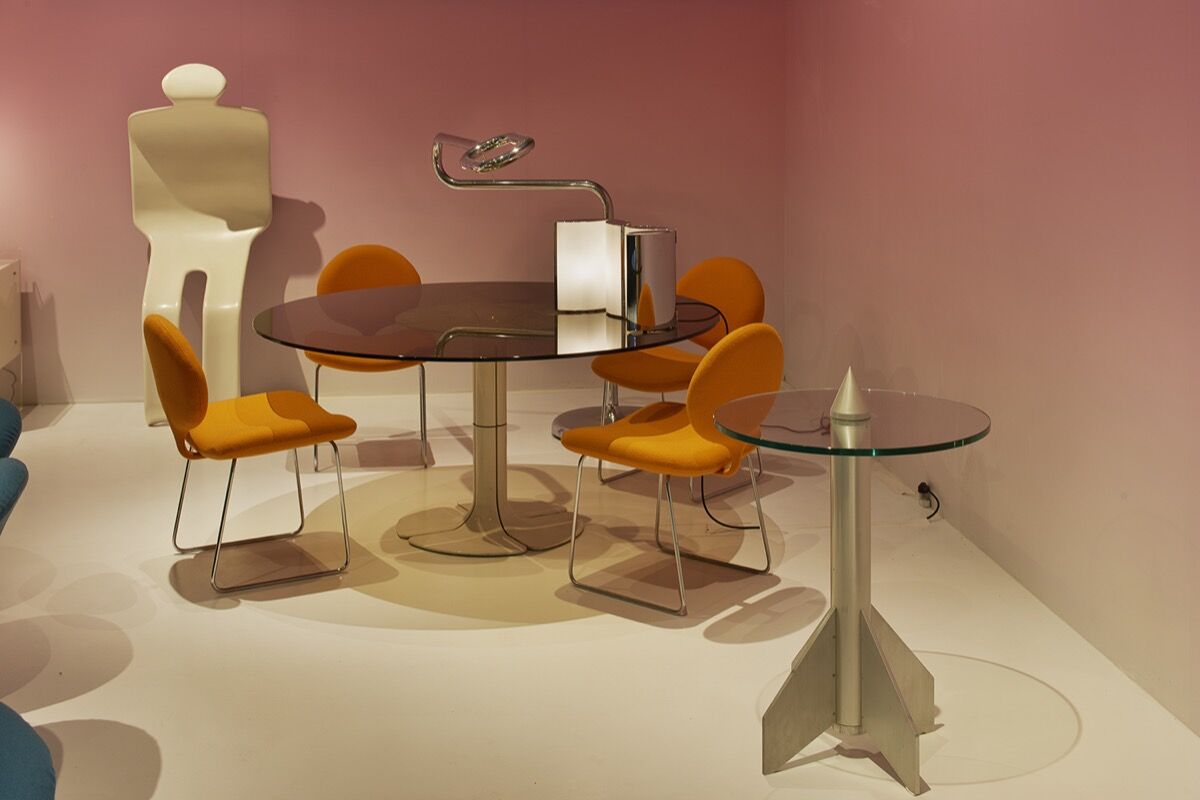 Around the corner lies the more subtle delight of Brazilian designer
Sergio Rodrigues
’s Mesa Parker (1978), a dining set made of solid pine. The surprising proportions of the set’s pine-and-cane chairs, which begin with high, narrow backs and follow a sinuous curve down to ample seats, make them decidedly sexy; the “Girl from Ipanema” of the dining room. The pieces were commissioned for a family home, and they radiate a feeling of warmth and the shared camaraderie of the dinner table—in other words, the psychic shelter of family and friends.
Another iconic design that reminds us of the forces of collectivity and compromise can be found at Demisch Danant. The gallery specializes in French design from the late 1950s through the 1970s, and this timeframe gives the booth an aura of glamour. This year, its centerpiece is a seven-seat
Pierre Paulin
“Multimo” sofa that cuts a gentle arc through the space, its armrests curving up and outward like a hitchhiker’s thumb. Originally intended for use in public space, it is wide and welcoming, yet its individually sculpted back rests suggest that certain rules of propriety ought to be observed. Surrounded by glass-topped metal tables and a raspberry-colored gradient wallpaper, the sofa seduces, but also wants you to know it respects your boundaries. 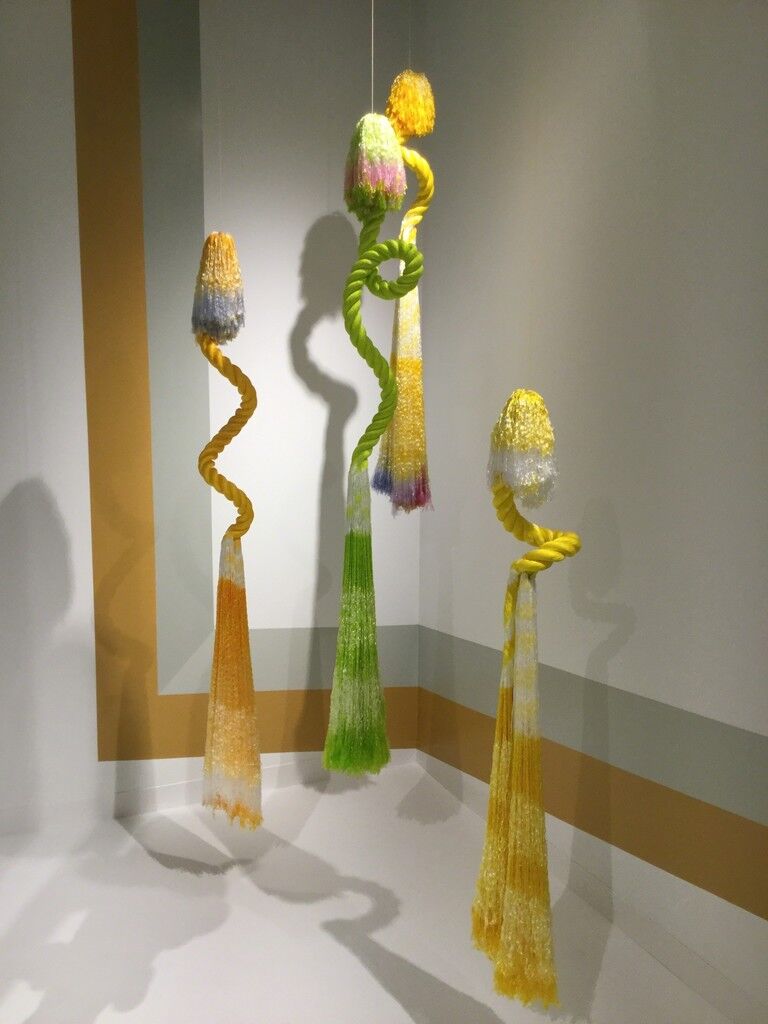 Ellen Grieg
Transformation 4, 2017
Galleri Format Oslo
Several stand-out booths provided an opportunity to see the work of designers from parts of the world less frequently represented at Design Miami. Norwegian Crafts and Galleri Format Oslo presented the work of textile artist
Ellen Grieg
and ceramicist
Elisabeth von Krogh
, whose vibrant colors and unexpected manipulations of form and scale feel fresh and urgent. The Cape Town and Johannesburg-based Southern Guild, whose aim is to “[redefine] global perceptions of African design,” filled their more spacious booth with large-scale work, including
David Krynauw
’s Jeppestown Play Bench, a massive, rotating circular bench symbolizing the fast-paced city life of Johannesburg.
Meanwhile, John Keith Russell Antiques’s presentation of Shaker objects offers a refuge from all of the fair’s sights and sounds. Things are quiet there, rectilinear, and blessedly simple. (Yet still rarified: an elegant seven-drawer desk sells for $30,000.) Russell specializes in Shaker material culture, the crafts of a Christian sect that practiced celibacy, took in orphaned children, and created elegant wooden furniture that continues to influence design today.
“In the antiques world I’ve always been an orphan,” Russell tells me, acknowledging that his wares are barely old enough to qualify as antiques at all. And yet, he’s found a home in the contemporary design scene. (Primack said that he has been trying to bring Shaker furniture to Design Miami for years.) But the appeal of Shaker furniture seems to reside beyond its harmony of form and function. It isn’t merely minimal, but born from ingenuity and crafted with a philosophical purity of intention. Russell flips over a chair to show me the Shaker solution for preventing scuffed and dented floors: a ball and socket device that allows the back legs of the chair to sit flat on the floor when you lean backward.
This small, yet perfect, innovation strikes me as the most impressive design solution I’ve seen all day.
Ariela Gittlen
Related Stories