Designer Germans Ermičs Reimagines What Glass Can Be 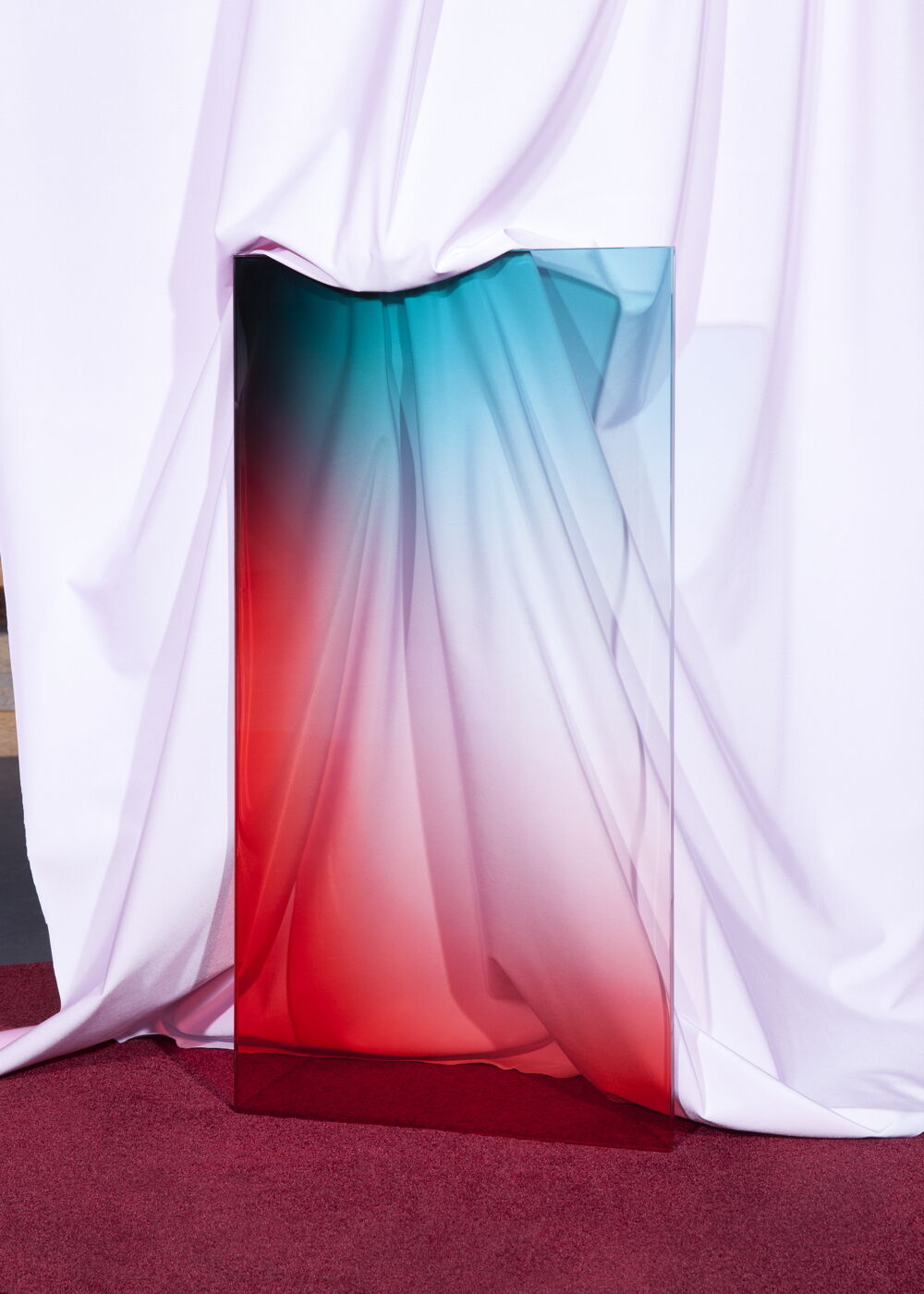 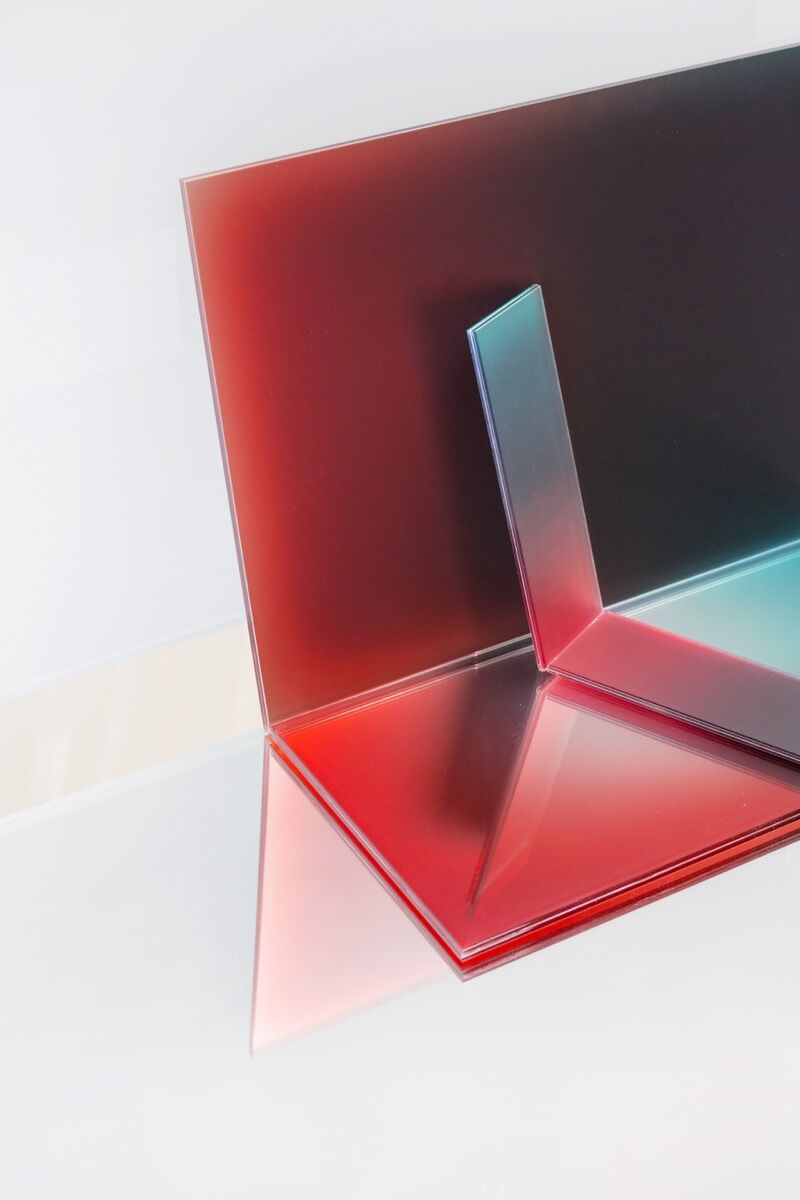 Detail of work by Germans Ermičs for FRAME Magazine, 2017. © Studio Germans Ermičs, 2018. Photo by Floor Knaapen. Courtesy of the artist.

Like the
Minimalists
of 1960s Southern California, such as
James Turrell
and
Larry Bell
, the designer Germans Ermičs wields light, space, and color to catalyze a shift in how we perceive objects. For the past few years, he has crafted refined and ethereal pieces of glass furniture.
It’s a material that Ermičs feels has earned an unfair reputation for being “fragile, dangerous, and cold,” he told me from his new studio in Amsterdam. The aim is to shift attitudes toward what his chosen medium can do—to “make people look at the glass, not through the glass,” as he put it. 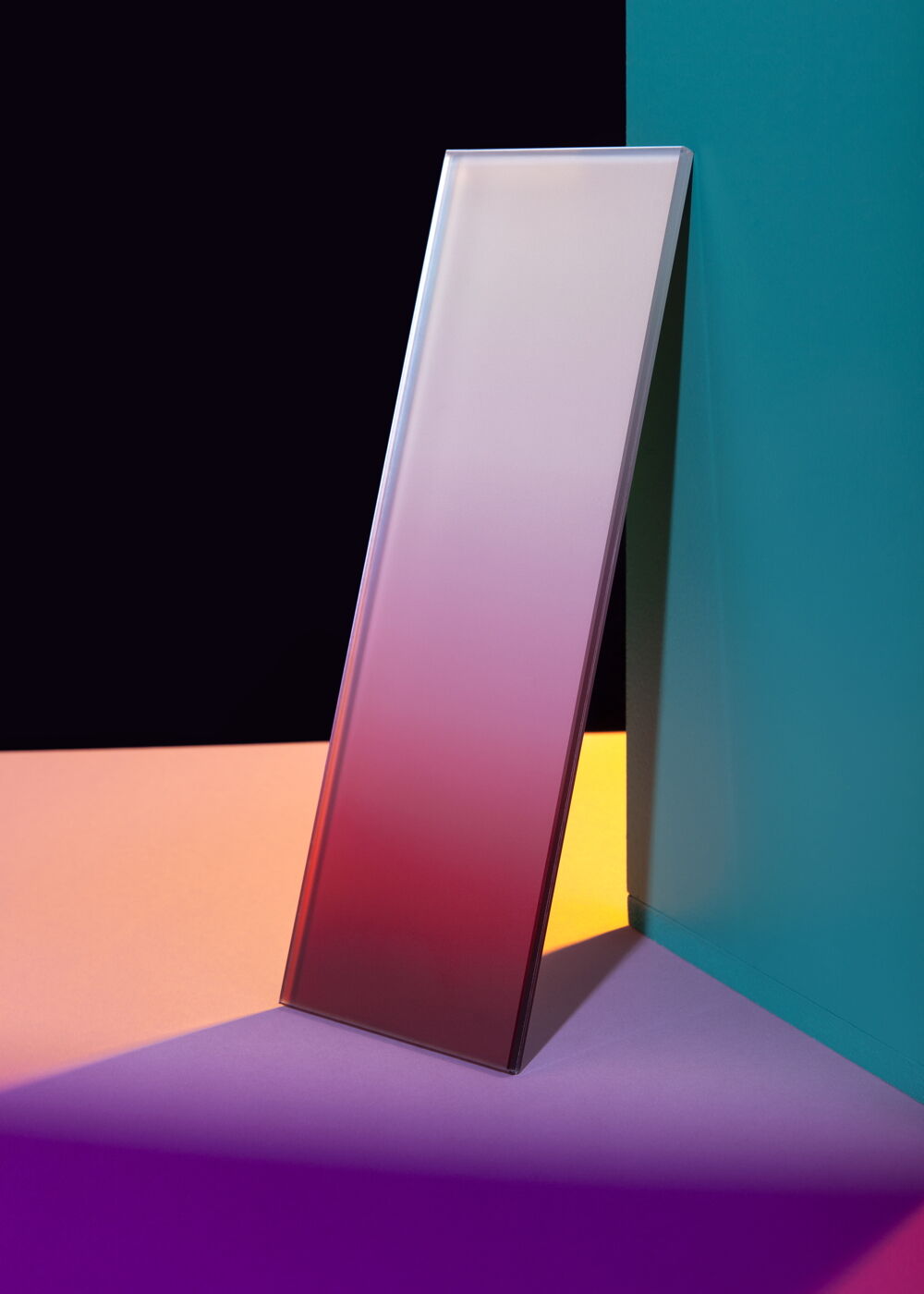 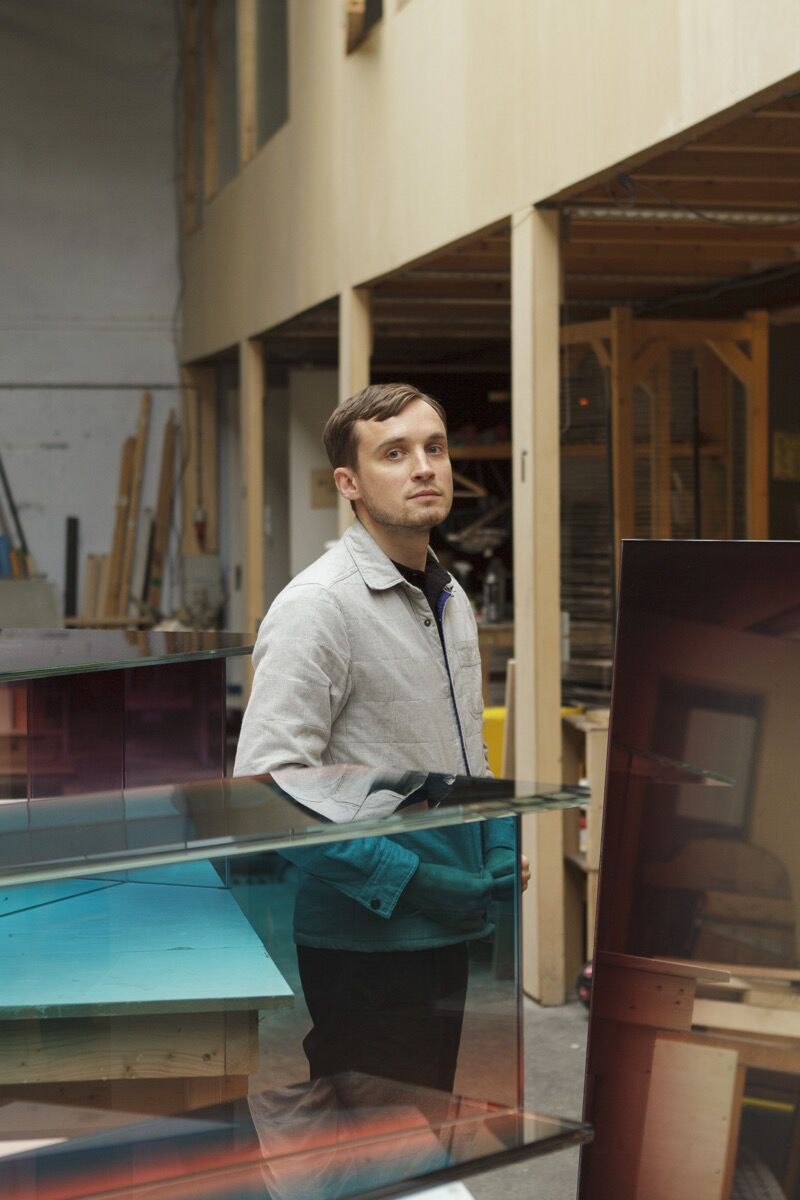 Because of the utilitarian functions of glass, we rarely pay it any mind, as we encounter it daily. But in Ermičs’s designs, glass becomes the stage for exquisite color treatments: It can be soft and frosted to blur the edges of form; ombré, to gently draw your eye across the surface; or mirrored, to reflect and manipulate the space you occupy. His large, freestanding “Horizon Screen” panels gently curve toward the viewer, the start of an embrace. His Ombré Glass Chair (2017), like the 1976
Shiro Kuramata
design it pays tribute to, evokes an almost magical simplicity—free of metal screws or fasteners, the panels that form the structure, bonded together, appear weightless. Ermičs wanted his version of the design to appear to be defined by color itself.
His “Shaping Color” series (2015–16) is similarly conceptualized. Uninterrupted rectangular panels of glass come together neatly to form a low table, a shelf, console, or mirror. In the first iteration of the series, Ermičs married two complementary tones; in the second, he pared down his palette further, playing with the density and richness of a monochromatic tint. In those designs, a single hue bleeds out from a corner, shifting from dark to light; or it fades upwards, as if a momentary breath of color had fogged the surface. 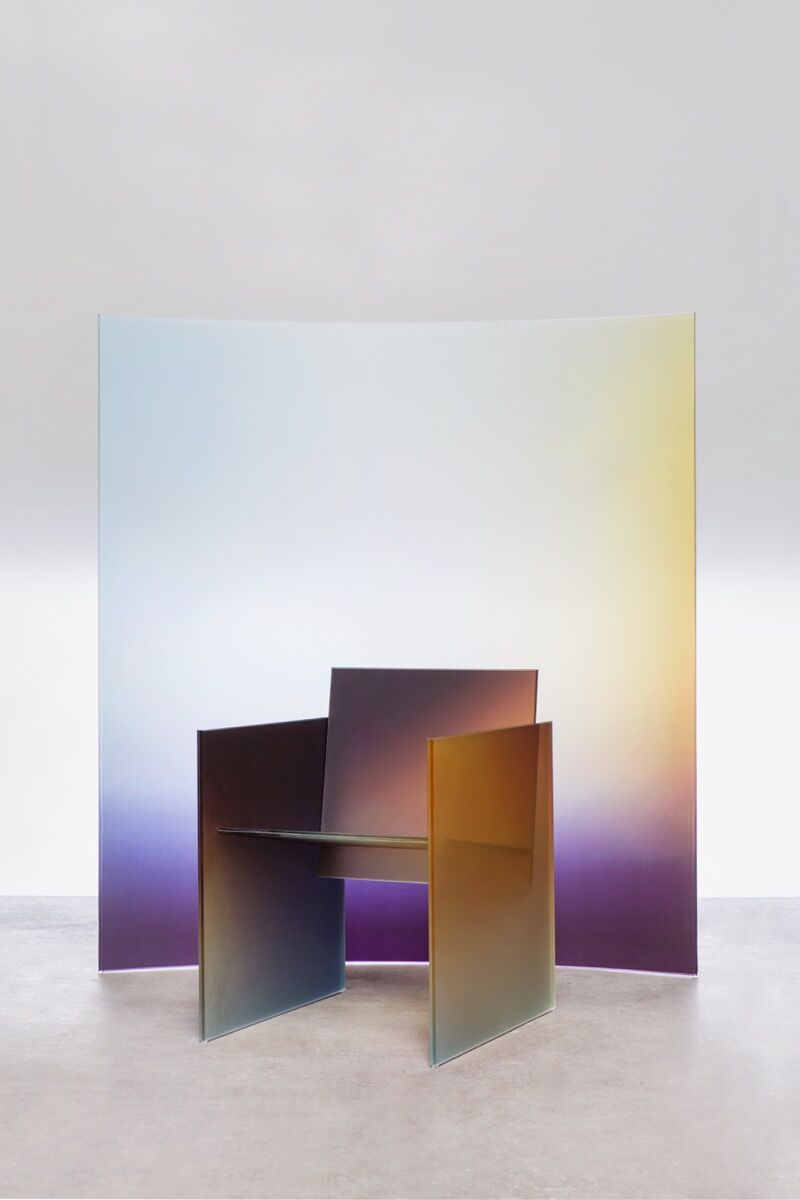 Advertisement
“I sometimes come up with ideas that are really difficult to realize,” he admitted with a laugh, noting that he’s more than willing to tap “fabricators and different producers who know the material and have the right tools and expertise in it.” It’s a collaboration, especially when he pushes the boundaries of what’s possible to construct. 7 Images
View Slideshow
Though glass is currently his focus, Ermičs—who was born in Riga, Latvia—began in print, experimenting with graphic design while in school, and later landing an internship at the esteemed Rasmus Koch Studio in Copenhagen. From there, he took an interest in interior design, relocating again to study at Design Academy Eindhoven. During those years, he said, is when he began working hands-on with materials and conceptualizing larger-scale projects. His background in two-dimensional design, though, has always continued to play a role in his thinking; he conceives of his glassworks as “two-dimensional thoughts materialized in objects.”
Ermičs opened his own studio in 2014, and has since regularly shown his pieces at fairs such as Salone del Mobile in Milan, Design Miami/Basel, and the Paris Art and Design Fair. He was honored by Wallpaper* Design Awards in both 2017 and 2018, and his designs have been featured in the Dutch magazine Frame. His works emphasize beauty over practicality. Of Ombre Glass Chair he noted: “You can sit on it, but that’s not going to be your everyday chair. It’s an art object.” He added: “I’m not competing with industrial designers and furniture brands.” 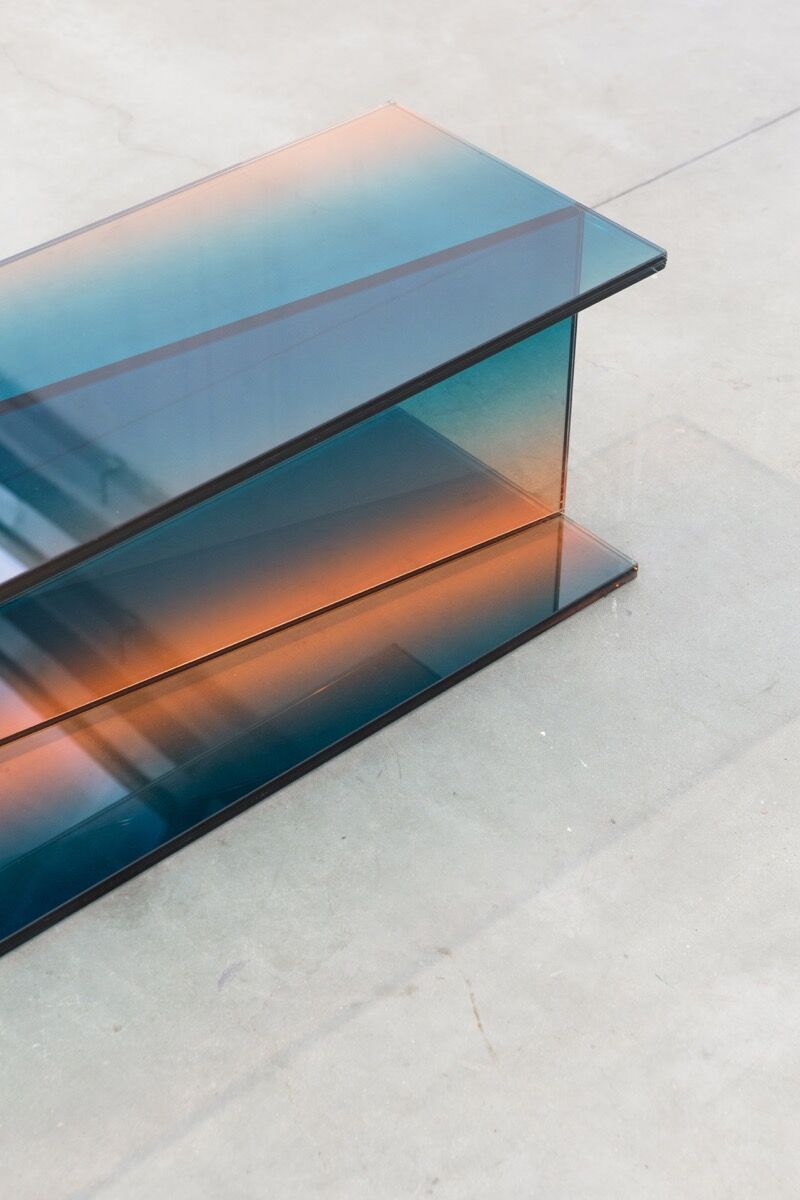 Yet Ermičs is also open to more commercial projects, and has crossed over into retail design several times. There was a commission with Glenn Sestig Architects for Raf Simons in London in 2016, as well as a project with Rene González Architect for Alchemist in Miami earlier this year. For the latter, a boutique store outfitted in raw concrete and steel, Ermičs and RGA designed an all-glass check-out area, with a color palette based on the sky and sea of the coastal metropolis. In a recent pop-up store for Danish electronics brand Bang & Olufsen, for which Ermičs conceptualized the interior, the designer traded his signature colors and glass for nude tones, travertine, and resin-coated aluminium.
Despite his fluency with glass, Ermičs doesn’t want it to be the defining characteristic of his identity as a designer. “I always say I’m not a glass artist; this is where I’m at at this moment,” he clarified. Currently, he’s working on a lighting project, as well as trying his hand at natural stone.
Though color is one of the main drivers of his work, he finds it difficult to express how he arrives at such dreamy, eye-catching combinations. “I’m always asked this question, and I never have a good answer to explain myself,” he replied. He takes cues from the world around him, synthesizing hues into RGB, and lets one color lead him to the next. He laughed, however, when I asked about sunsets, an inspiration he’s mentioned previously. “I’m not always interested in literal translations,” he said. “Sometimes I just want to achieve the feeling I have with certain colors.” That elusive feeling is where the magic begins.
Jacqui Palumbo is a contributing writer for Artsy Editorial.
Related Stories

A Globetrotting Designer Photographs His Travels in Vivid Color 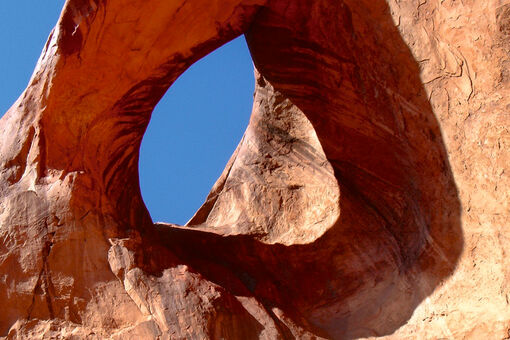