Despite Obstacles, African Countries Shine at the Venice Biennale 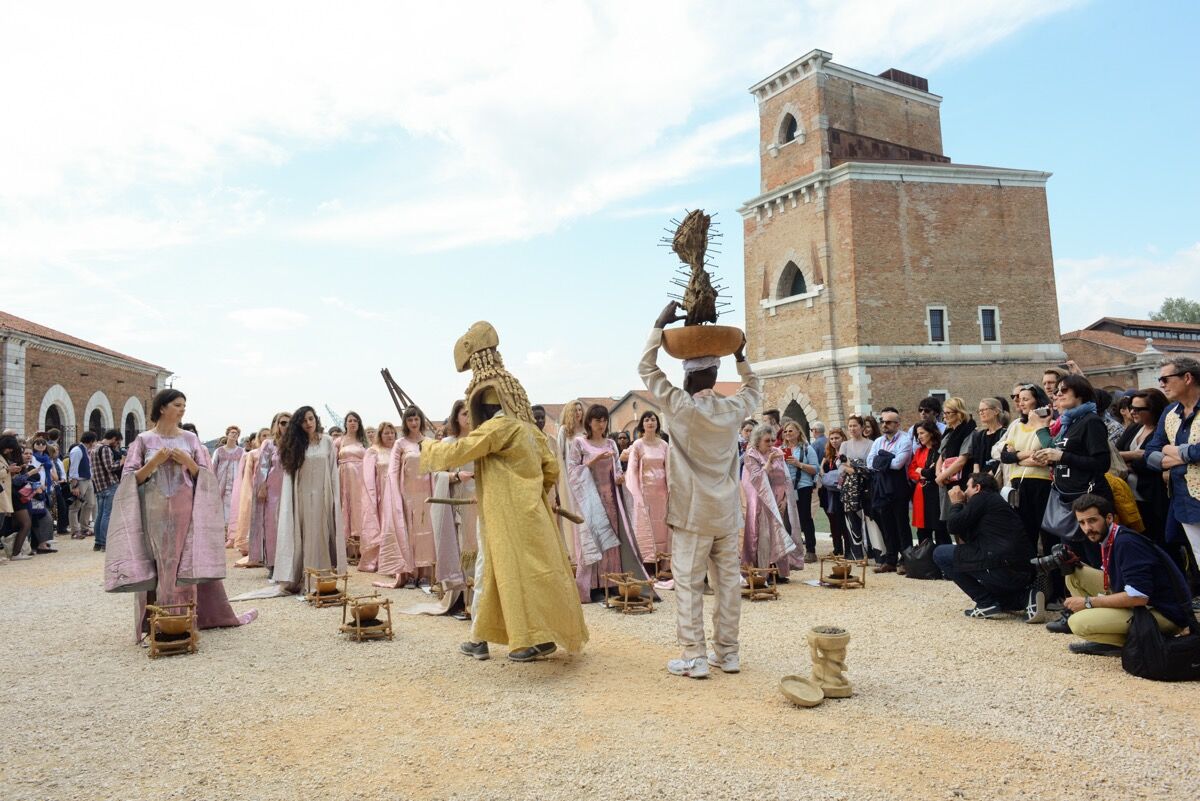 A Nigerian performance piece at the Arsenale for the 57th Venice Biennale, 2017. Photo by Casey Kelbaugh for Artsy.

It may come as a surprise to visitors to the 2017 Venice Biennale that across this year’s main exhibition, black artists are relatively absent.
Despite the Nigeria-born Okwui Enwezor’s groundbreaking 2015 Biennale exhibition—which issued a powerful corrective to the art world’s racial imbalances and confronted viewers with the loaded history of colonialism and exploitation—only nine artists of African descent appear in Christine Macel’s “Viva Arte Viva.”
Still, signs of Enwezor’s continued influence and the growing presence of Africa on the art world’s stage can be felt outside of the central exhibition, at a series of African national pavilions and the talks that took place during the opening days of the Biennale as part of the African Art in Venice Forum.
Conversations with pavilion organizers revealed the herculean effort it takes to bring a pavilion to fruition without the existing infrastructure that the old world powers have in place—including a permanent space, regular funding sources, government support, and other assets nations like Germany or the United States take for granted when showing in Venice.
Despite these obstacles, several African nations have assembled world-class presentations, and the stories behind them are equally inspiring. Among them is that of the Kenya Pavilion, which has made a heroic appearance at the 2017 Biennale—following a botched attempt at a pavilion in 2015, when it was canceled amid outrage that the organizers were including primarily Chinese artists. (Kenya’s first-ever national pavilion in 2013 was also largely populated by Chinese artists.) 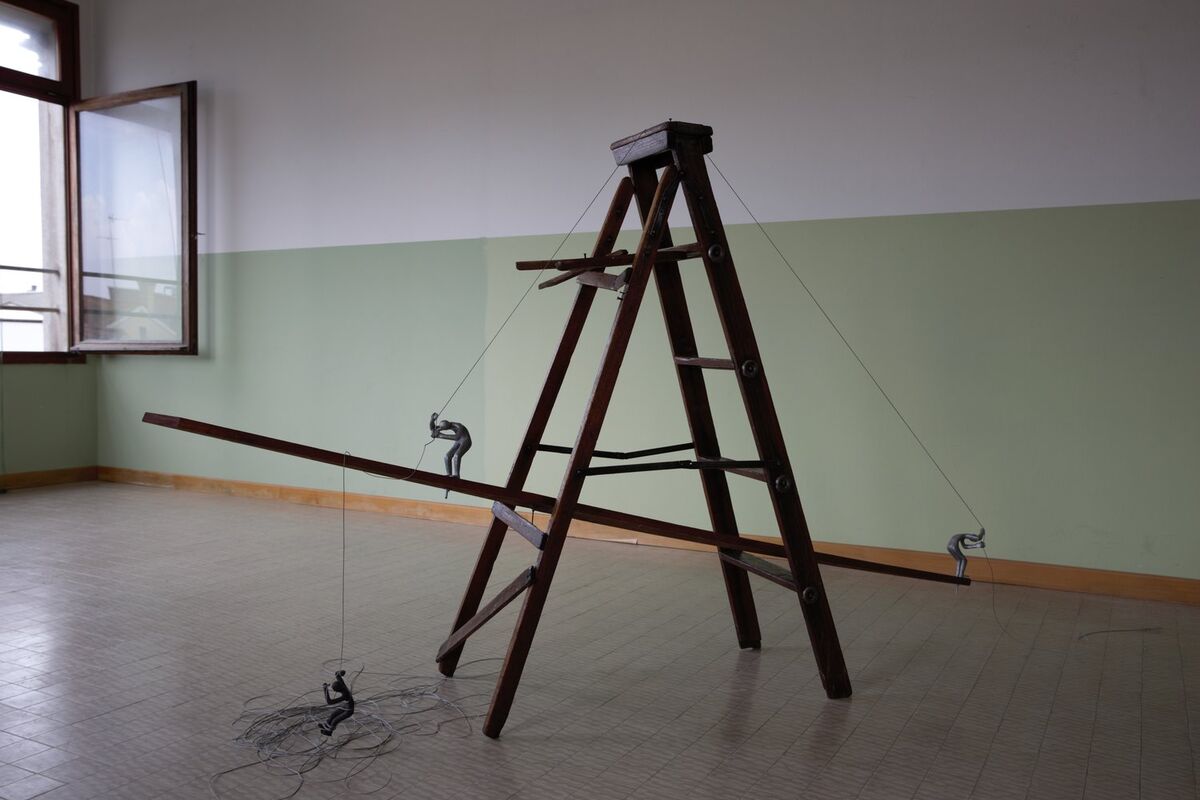 Installation view of Arlene Wandera, On the Ladder, for the Kenya National Pavilion at the 57th Venice Biennale, 2017. Courtesy of Zuecca Project Space.

The pavilion’s curator this year, Jimmy Ogonga, said that, despite going through the necessary planning steps and bureaucracy within Kenya, their approved government funding ultimately failed to materialize. He and the five Kenyan artists included in the pavilion were forced to abandon their original space close to the Punta della Dogana—where
Damien Hirst
’s fictional tour through the treasures of a shipwreck, including an appropriated 14th-century Nigerian work, is currently drawing large crowds.
In contrast to the staggering glitz and fanfare of Hirst’s show, Ogonga and his team ended up having to transport smaller artworks to Venice in their luggage.
“It really pushed us to the limit,” said Ogonga. “But accidents are beautiful because they can create miracles. And I think we will only be able to talk about it once everything sinks in, once everyone relaxes. We will be able to look at it in perspective.”
With the help of Alessandro Possati, director of Venice’s Zuecca Projects, the Kenya Pavilion decamped to a series of classrooms at the top of a school on Giudecca Island—a 30-minute journey from the bustling hubs of the Biennale’s Giardini and Arsenale locations. There, visitors who make their way through the sleepy residential streets of Giudecca find an elegant, ethereal exhibition, featuring the work of
Arlene Wandera
,
Mwangi Hutter
,
Peterson Kamwathi
,
Paul Onditi
, and Richard Kimathi.
Ogonga notes that Enwezor’s exhibition in 2015 has helped to create momentum around the African national pavilions. “I would compare it quite loosely to the Obama Effect,” he said, “but I don’t expect the full results to be immediate.”
However, Ongonga is quick to offer the caveat that many others have contributed to the visibility of African nations at the Biennale. Those include Raphael Chikukwa, curator of this year’s Zimbabwe Pavilion, who he says has been instrumental in mobilizing resources for both Kenya and Angola (the latter which triumphantly won the Golden Lion with its satellite pavilion in 2013). And Fernando Alvim and Simon Njami, who organized the controversial 2007 African Pavilion, which attempted to represent the whole continent as one entity. 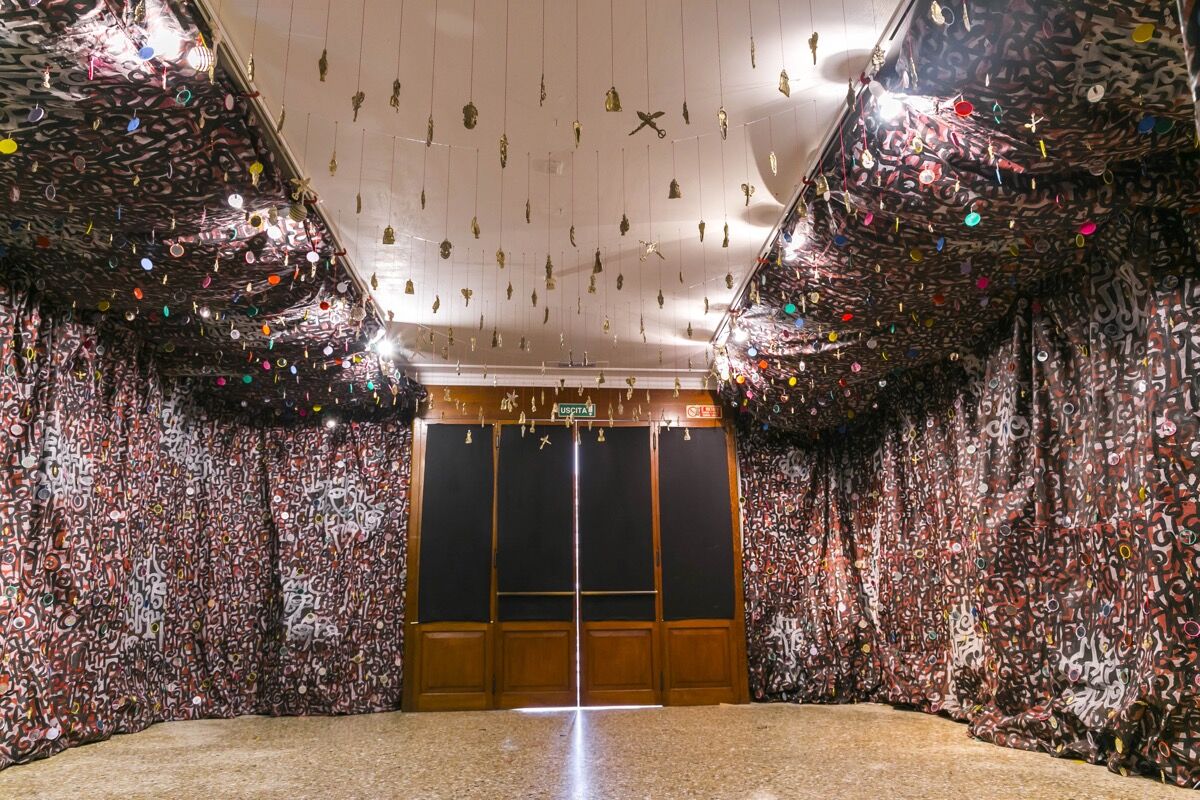 Installation view of Victor Ehikhamenor's, A Biography of the Forgotten, 2017, for the Nigeria National Pavilion at the 57th Venice Biennale, 2017.

Advertisement
The Nigeria Pavilion, which is making its first official appearance in Venice this year, has also been years in the making and a country-wide effort, said the pavilion’s Communications Consultant Ayodeji Rotinwa. The lead curator Adenrele Sonariwo, a gallerist from Lagos, attended the Biennale in 2015, Rotinwa said, and it dawned on her that it was about time the country had official representation.
An earlier effort to mount a Nigerian Pavilion for the 2015 Biennale had failed, which Rotinwa attributed to the country being in the midst of an election year. (Kenya’s lack of funding this year has similarly been tied to the country’s current election cycle.)
In 2017, having learned the lessons of 2015, the Nigeria cohort has put together a pavilion that is privately funded and “almost exclusively Nigerian,” Rotinwa said, from the organizers, to the funders, to the artists—
Peju Alatise
,
Victor Ehikhamenor
, and Qudus Onikeku—whose work, shown together, is intended to capture Nigeria’s past, present, and future.
(That’s not to say the organizers didn’t face obstacles this time around, though. The Nigerian Pavilion also had to give up its original space just months before opening because the landlord believed one of the artists, Victor Ehikhamenor, was practicing black magic.)
“I think that Okwui’s show broke the glass ceiling,” said Rotinwa. “Some of the world might know there’s fantastic work being done in Nigeria, but most of the world hasn’t had the opportunity to see these things. This is what Okwui did for African artists. Yes we’re there, we’re present, but we are not being seen.” 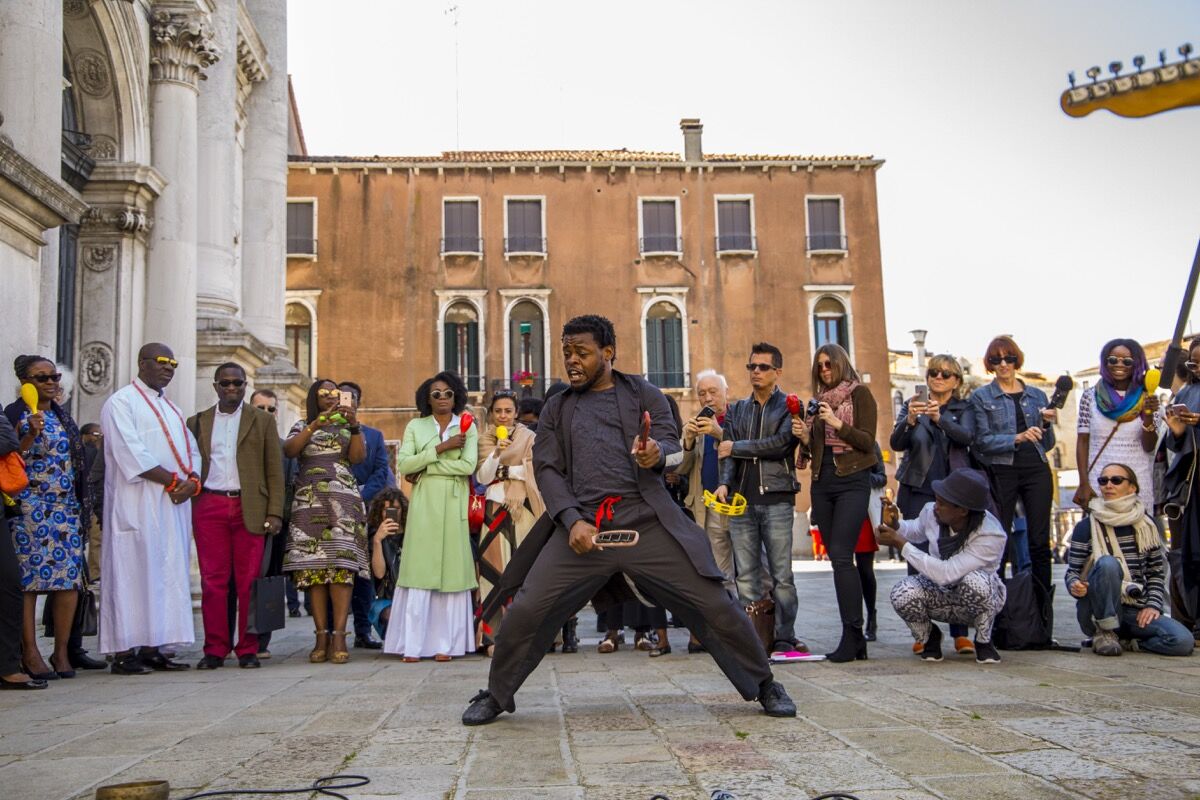 Perhaps the biggest of Africa’s success stories at the Biennale, though, is South Africa, which has had the advantage of a permanent space in the Biennale’s Arsenale location for the past four iterations of the event. (Egypt is the only other African nation with a permanent space in Venice.)
The pavilion had a particularly strong presentation this year, drawing high praise for its ambitious showcase of two immersive works by
Mohau Modisakeng
and
Candice Breitz
, exploring the migrant experience and the history of black identity in South Africa.
The pavilion’s curators, Lucy MacGarry and Musha Neluheni, credit their more confident outing at this year’s Biennale partly to this being the first time the pavilion has been allowed to receive private or corporate support—from galleries and an auction house, among others—beyond primary funding from the South African Department of Arts and Culture.
“That’s a big step forward for us,” said MacGarry. “It’s enabled us to market the pavilion properly and have things like a party, which is important to get together as a community. But it’s also to encourage a feeling of investment from our local network.”
That investment was on full view at a dinner celebrating the South African pavilion during the Biennale’s opening days, where the mood was jubilant, and where attendees represented the country’s rapidly evolving art world. Those included Liza Essers of Goodman Gallery, who hosted the event; Frank Kilbourn, of Strauss & Co, one of South Africa’s homegrown auction houses; and Jochen Zeitz, who is set to open the much-anticipated Zeitz Museum of Contemporary Art Africa in Cape Town later this year.
With the additional support of the South African art community, the curators chose to eschew what they said was the politically correct approach to presenting on the global stage—to take as many artists as possible to the Biennale in order to share the platform widely. “They always think: everyone needs a chance,” said Neluheni of South Africa’s local art community.
But in light of the country’s growing art industry, they felt it was time to focus on the quality and curatorial strength of their presentation, rather than inclusivity. “I think we’re at a point now where we can compete at an international level in a very real way,” said MacGarry. “So our intention was to limit the number of artists and bring it down, and make it a little more immersive.” 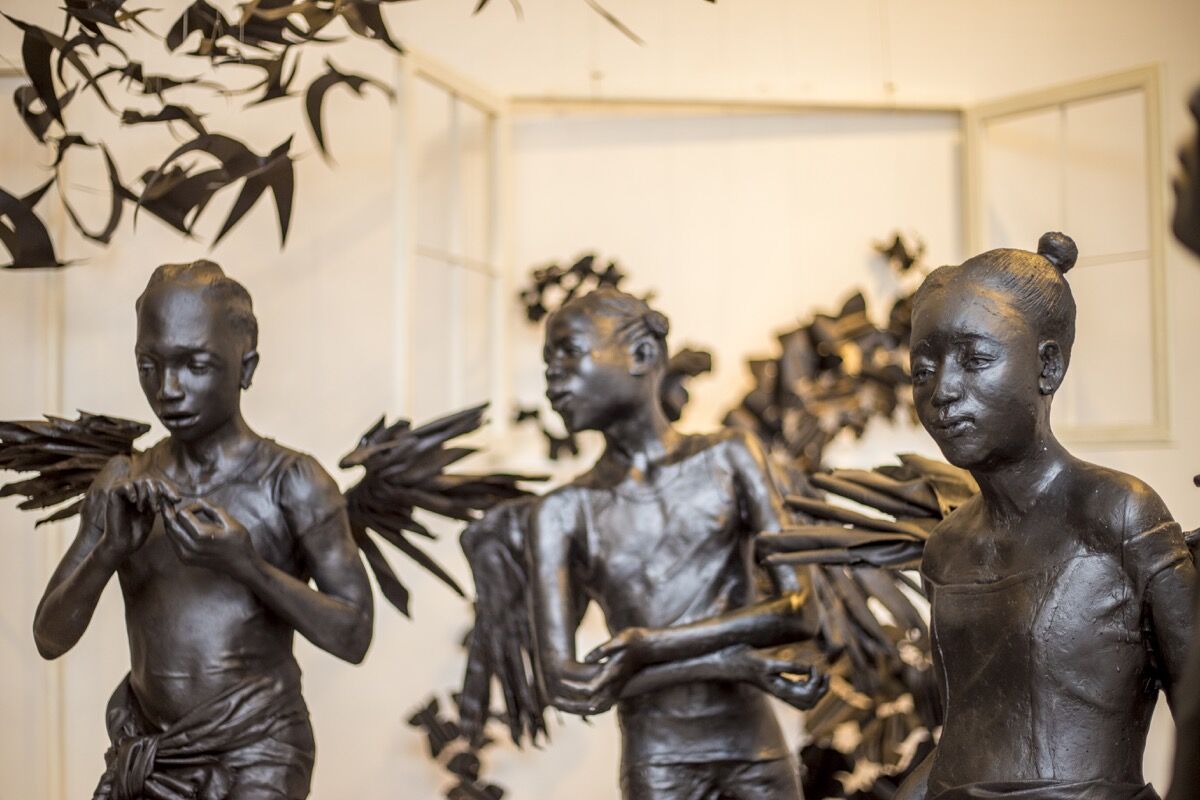 Detail of Peju Alatise's, Flying Girls, 2016, for the Nigeria National Pavilion at the 57th Venice Biennale, 2017.

While African nations present at this year’s Biennale have been receiving acclaim—Tunisia, returning to Venice after more than 50 years, also drew praise for its series of kiosks issuing universal passports to become a citizen of the world—another pavilion showing artists of color is working to counter the notion of national identity as an organizing rubric altogether.
The Diaspora Pavilion, showing 19 artists of diverse backgrounds—from well-known artists like
Yinka Shonibare MBE
and
Isaac Julien
to lesser-knowns, like Larry Achiampong and
Barbara Walker
—is a project of the International Curators Forum (ICF), led by the British Afro-Caribbean curator David A. Bailey.
“David has wanted to do this for a decade,” said Jessica Taylor, the ICF’s Director of Programmes. “He launched the ICF in Venice in 2007, and everything he’s done up until then has led up to this moment.”
Enwezor has exerted some influence over the Diaspora Pavilion, too. The plans for the pavilion began to take shape after the ICF took four emerging artists and curators to Venice in 2015, Taylor says, and the curators also traveled to Munich’s Haus der Kunst, where Enwezor is director, to meet with the curator in February of this year.
“We held a masterclass for the 10 curators on Okwui’s ‘Postwar’ show at the museum,” said Taylor. “And the question he posed to all of us was: What is our project, and how are we going to add to the building of knowledge?” 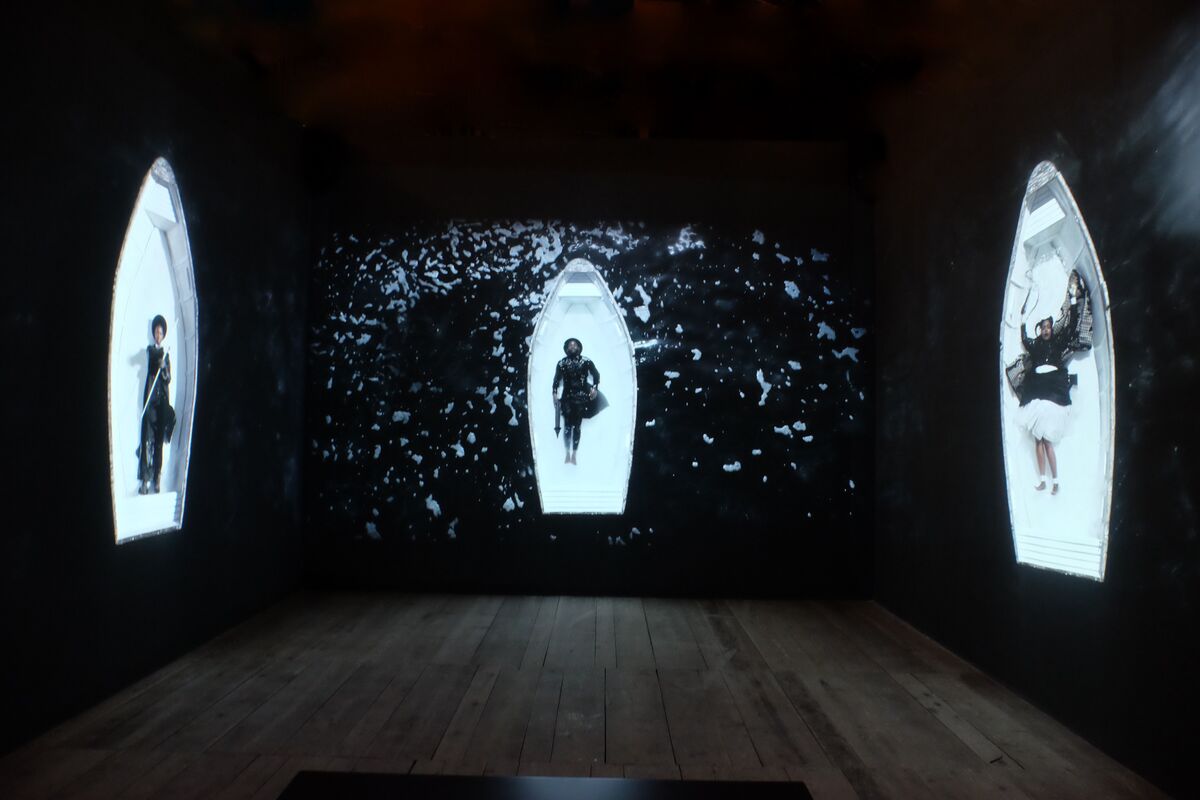 The exhibition Taylor mentioned, “Postwar: Art Between the Pacific and the Atlantic, 1945–1965,” curated by Enwezor along with Katy Siegel and Ulrich Wilmes, examined art production from a global perspective in the years following World War II—a period that marked the end of the old world order and colonialism, and the rise of both nation-building and liberation movements.
As knowledge and awareness of Africa’s enormous contributions to the history and present of art continues to take root, one hopes that future exhibitions at the Biennale will similarly capture that wide-angled perspective on cultural achievements around the world—and that more African nations will find permanent homes in Venice.
Tess Thackara
Related Stories