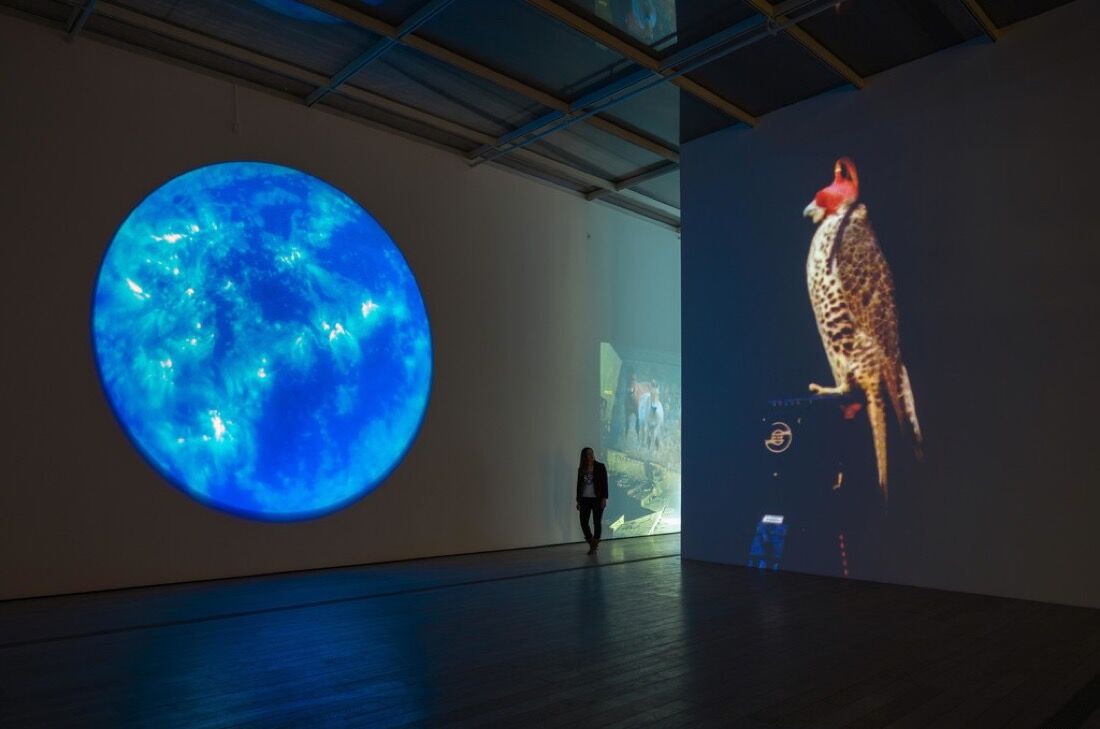 When watching a film, it’s usually frowned upon to stand directly between the projector and the screen—but this is exactly what the works of
Diana Thater
invite. It is impossible to experience her art without being aware of one’s own body; images and video alone don’t do them justice. As Christine Y. Kim, curator of the artist’s current exhibition at Los Angeles County Museum of Art (LACMA), told me, “You’re not looking at the art. You’re inside of the art. You’re meant to perforate the beam of light so that your body is in the projection.”
“The Sympathetic Imagination” is both the L.A.-based artist’s first full-scale museum retrospective in the U.S. and LACMA’s largest solo exhibition featuring the work of a female artist. It presents almost 25 years of Thater’s pioneering film, video, and installation art, which form a link between earlier structuralist filmmakers and a new generation of artists innovating with video and technology like
Ryan Trecartin
. 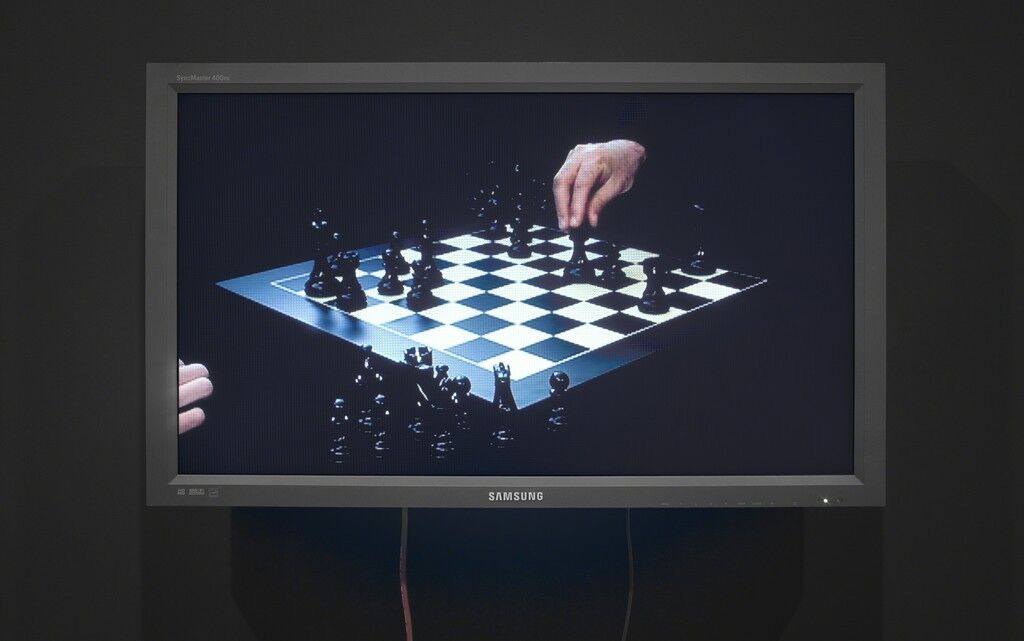 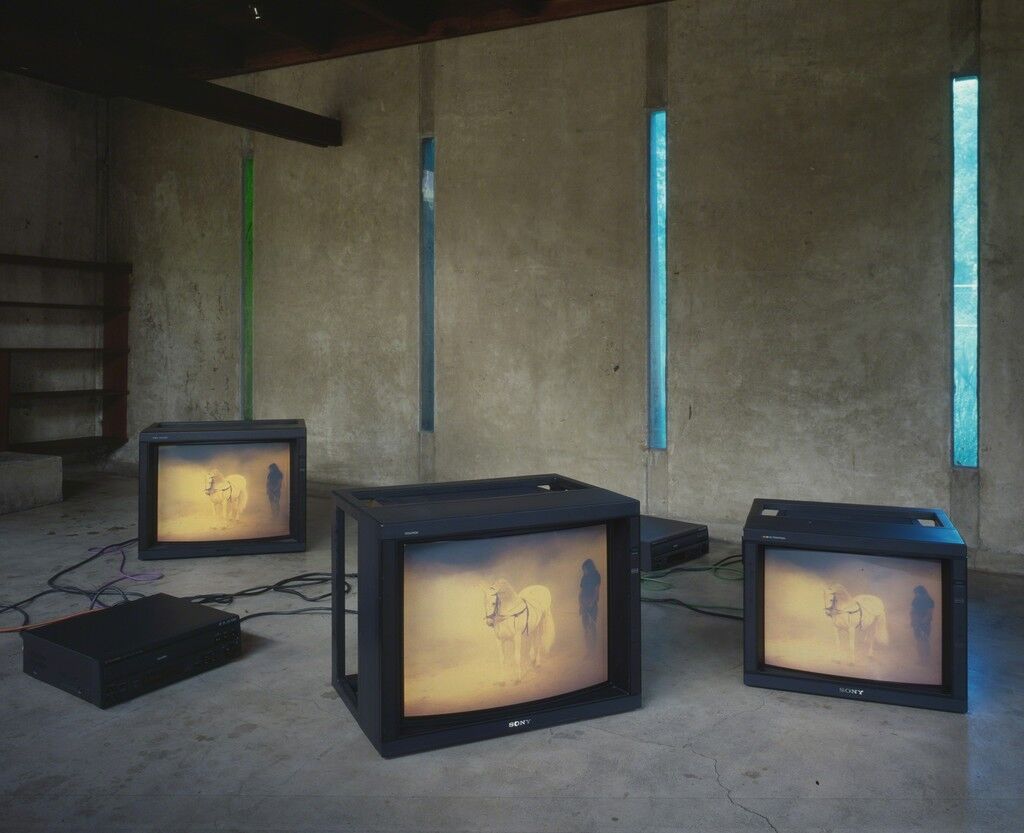 Diana Thater
Prototypes for The best space is the deep space, 1998
"Diana Thater: The Sympathetic Imagination" at LACMA, Los Angeles
When Thater first began making work in the early 1990s, painting still dominated the art world, and video was fast gaining traction. At an exhibition preview last week, LACMA director Michael Govan asked Thater about her relationship to painting. “I couldn’t paint. I decided I would do something I could do,” she replied, eliciting a chuckle from the audience. “When I started working, some of the most important artists working in video were doing things that I wasn’t interested in. They were doing very theatrical, neo-narrative work. I wanted to jump back to structuralist innovators like
Nam Jun Paik
, The Vasulkas,
Joan Jonas
. I wanted to move it into the future by deconstructing the apparatus, taking the machines apart, taking the images apart.” 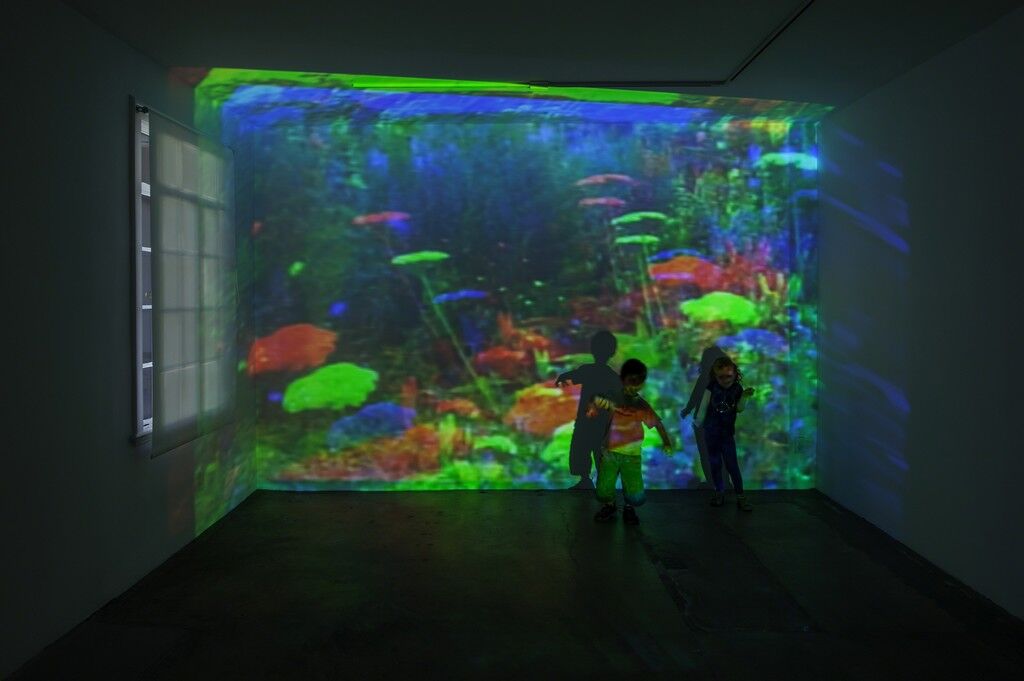 Diana Thater
Oo Fifi, Five Days in Claude Monet's Garden, Part 1, 1992
"Diana Thater: The Sympathetic Imagination" at LACMA, Los Angeles
Advertisement
This is precisely what she did with her earliest work on view in the exhibition, Oo Fifi, Five Days in Claude Monet’s Garden (1992). Filmed during a residency at the Fondation Claude Monet, the work is an impressionistic portrait of
Monet
’s Giverny garden through dueling video projections. In Part 1, she uses one projector to break apart the colors of the image into red, green, and blue. In Part 2, she uses three projectors, each representing one color, to attempt to reconstruct the image again. The result is a dazzling and somewhat disorienting visual tour through lush flora, as a cat flits across our path. “[Monet] pulled the colors apart to make paintings that are literally about light,” Thater said of her thought process. “Here I am working in a medium that is about light, and I thought that I could somehow talk to his work.” 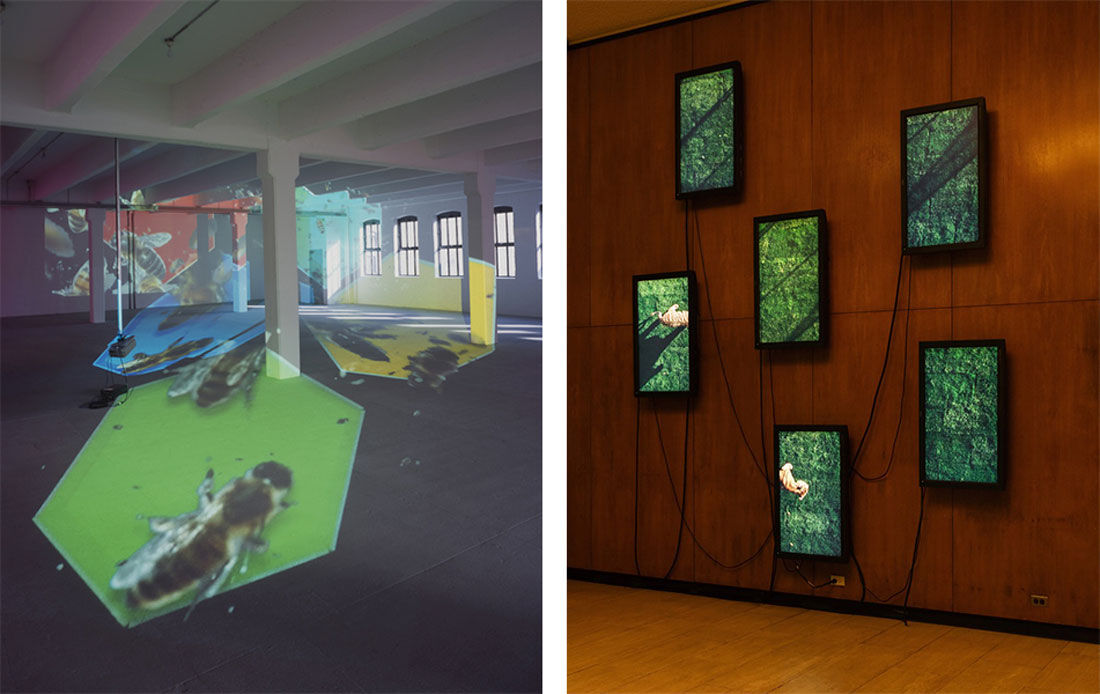 In all of Thater’s work, there is a tension between natural and human-made environments. Animals, insects, and plants take on prominent roles as entities that exist outside of our anthropocene sphere, often governed by their own rule-based systems. Perfect Devotion Six (2006) features six monitors that display aerial images of three tigers at a sanctuary for big cats. The animals meander between the screens, unaware of the technological boundaries between them. In knots + surfaces (2001), honeybees perform their cryptic dance atop a multi-colored hive. Viewers can break apart the image with their bodies, but decoding the bees’ language proves more difficult. 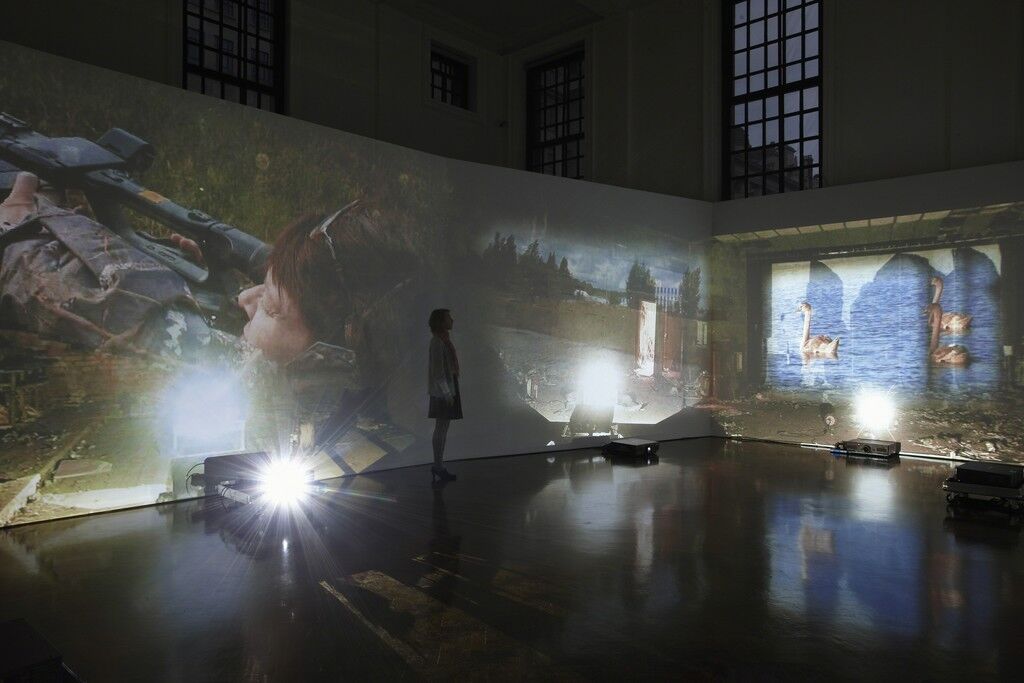 Diana Thater
Chernobyl, 2011
"Diana Thater: The Sympathetic Imagination" at LACMA, Los Angeles
Chernobyl (2011) is a multi-projection work that surrounds the viewer. Thater traveled to the site of the infamous Chernobyl nuclear power plant meltdown and filmed the horses, swans, and other wildlife that had begun to return after the devastation. She then projected the footage onto the walls of a crumbling movie theater nearby, and in turn filmed that projection. What we see are images of nature filtered through the scrim of human-made destruction. Thater confuses our comfortable position as spectator by placing us both in nature and inside the theater simultaneously.
One of the exhibition’s highlights is China (1995), another room-filling projection work. To make it, Thater set up six cameras in a circle pointing inwards at a pair of wolves being trained to stand still on a dusty California hillside. In the museum, she flips this arrangement, projecting the six images onto the four walls, placing the viewer at the center and the wolves on the periphery. The pair has become a pack of 12. The six images are split into primary and secondary colors—red, blue, green, cyan, magenta, and yellow—providing a brilliant kaleidoscopic landscape. Our typically stable viewing position is disrupted as we are thrust into the center of the action, surrounded by wolves and partially blinded by light. 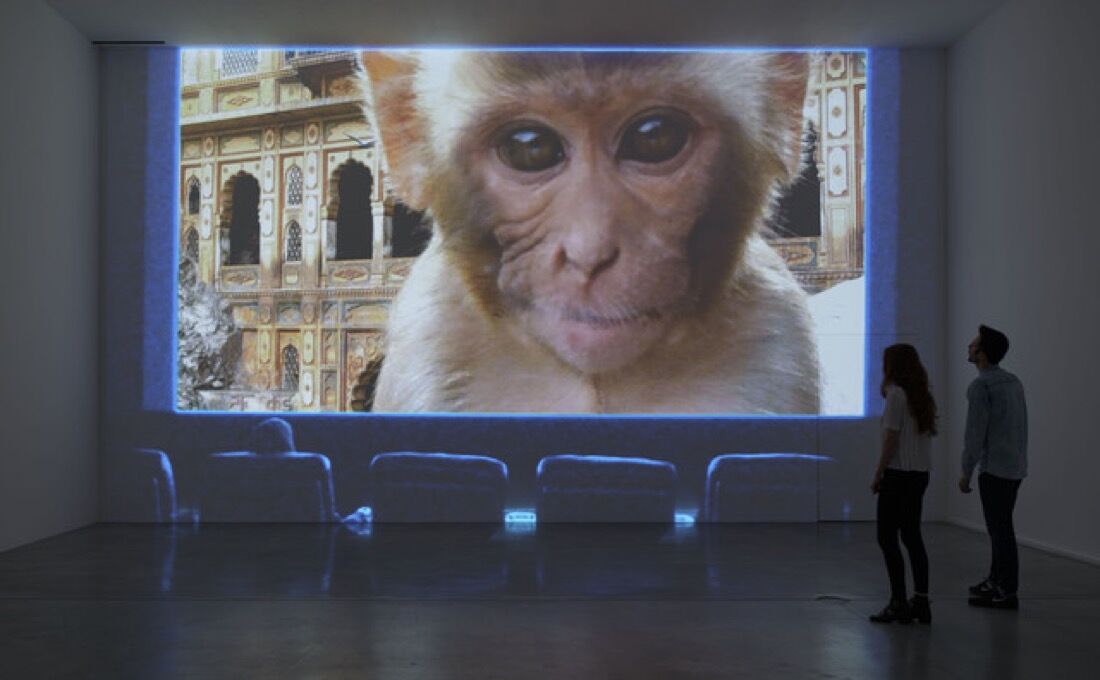 Throughout the exhibition, the borderlands between individual works are fluid, as projections spill off their walls, through doorways, and into other rooms. Architecture has always been a major element of Thater’s practice, with each unique exhibition space often determining how the work will appear. In her newest work in the show, however, the video dictates the form of the architecture.
Life is a Time-Based Medium (2015) depicts the façade of an Indian temple dedicated to the Hindu monkey god Hanuman, built into a cliff face. In an unusually straightforward presentation, Thater projects this image flat against a wall. Where the entrance would be, she has cut out a delicately scalloped portal into the gallery wall, a pathway to the monkey shrine’s interior. Enter the breach in the wall and you’ll find a projection of a theater, on whose screen plays a video of a monkey. Thater effectively fuses the real space of the museum with the projected space of the temple and the invented space of the theater. 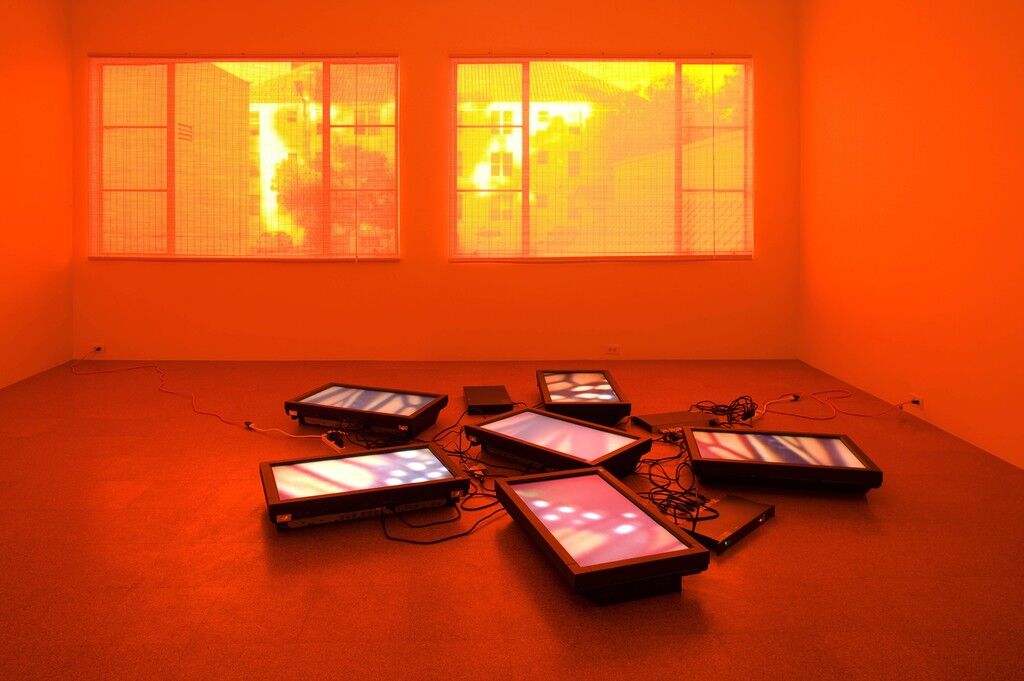 Diana Thater
Untitled Videowall (Butterflies), 2008
"Diana Thater: The Sympathetic Imagination" at LACMA, Los Angeles
By taking apart the tools and methods of video and implicating viewers in the image, Thater knocks us out of our visual complacency and questions our relationship to images. Instead of simply thwarting our aesthetic pleasure, she produces works that draw us in and hold our gaze, even as they destabilize our positions. “We’re so conditioned by narrative, that there’s a beginning, middle, and end,” Kim told me. “But when you break apart those conventions, stepping outside of the model, stepping outside of time and space and looking in, you see what those rules are. If you can go back into that space, then perhaps your perspective can be not as colonialist or object-subject-oriented or binary—which, culturally speaking, are ways we understand animals, ecosystems, and language—but something else within that space and within the art.”
—Matt Stromberg
“The Sympathetic Imagination” is on view at LACMA, Los Angeles, Nov. 22, 2015–Feb. 21, 2016.
Explore LACMA on Artsy.
Related Stories