Artsy Editors
Dec 8, 2015 1:45pm
The Ship of Theseus—an ancient thought experiment otherwise known as the Theseus paradox—was first recorded by Plutarch in the late first century. The intellectual puzzle asks whether an object, in this case a ship, is fundamentally the same if every one of its parts is replaced. This past month, the Dutch artist
Diemut Strebe
brought her fantastic and complicated exploration of the Theseus paradox, along with other high-concept works, to Ronald Feldman Fine Arts in “Free Radicals: Sugababe, and Other Works.” 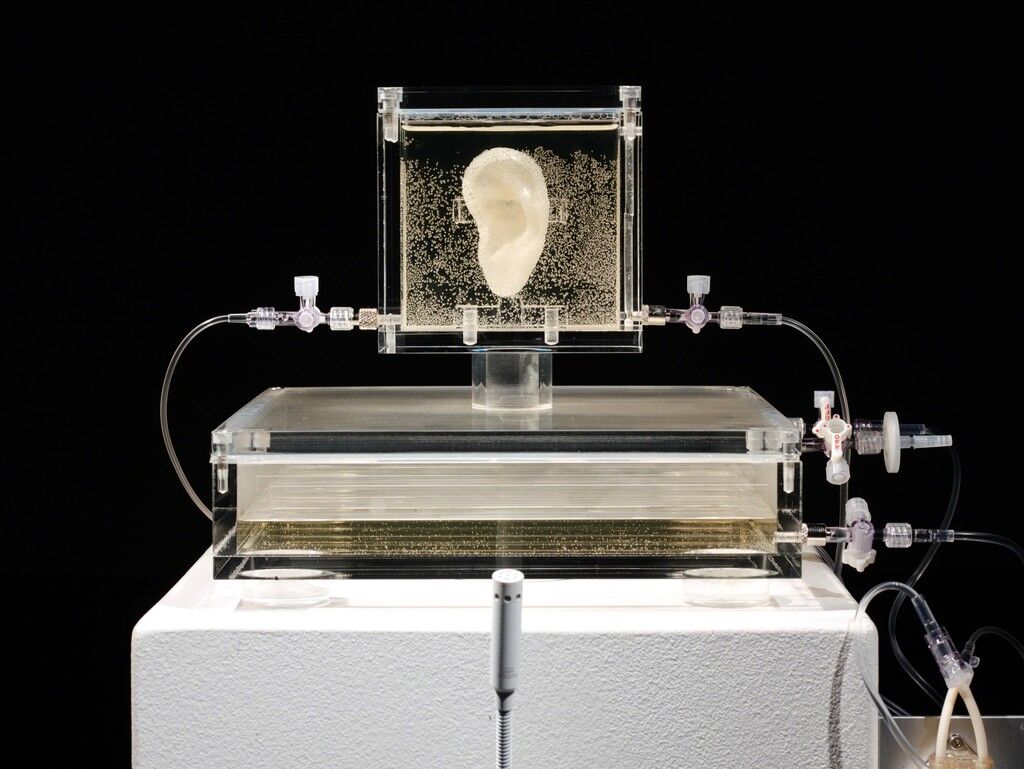 Sugababe, 2014
Ronald Feldman Fine Arts
The show featured Strebe’s best-known work, Sugababe (2014), an intriguing living recreation of legendary artist
Vincent van Gogh
’s ear, which he famously cut off—or lost in a fight, according to some historians. To create it, the artist consulted numerous scientists, initially working from mitochondrial DNA extracted and sequenced from an archival envelope from the Custodia Foundation in Paris, and later using samples from the great-great grandson of Van Gogh’s brother, who donated a piece of tissue. Having tracked down a rare image of Van Gogh’s right ear, Strebe created a model and 3D-printed a scaffolding onto which tissue was grown in a bioreactor over the course of a year. The full-grown ear is housed in a chamber that supplies it with nutrients and oxygen. A microphone, attached to computerized sensors, sends electrical pulses to the ear to simulate the sensation of hearing. 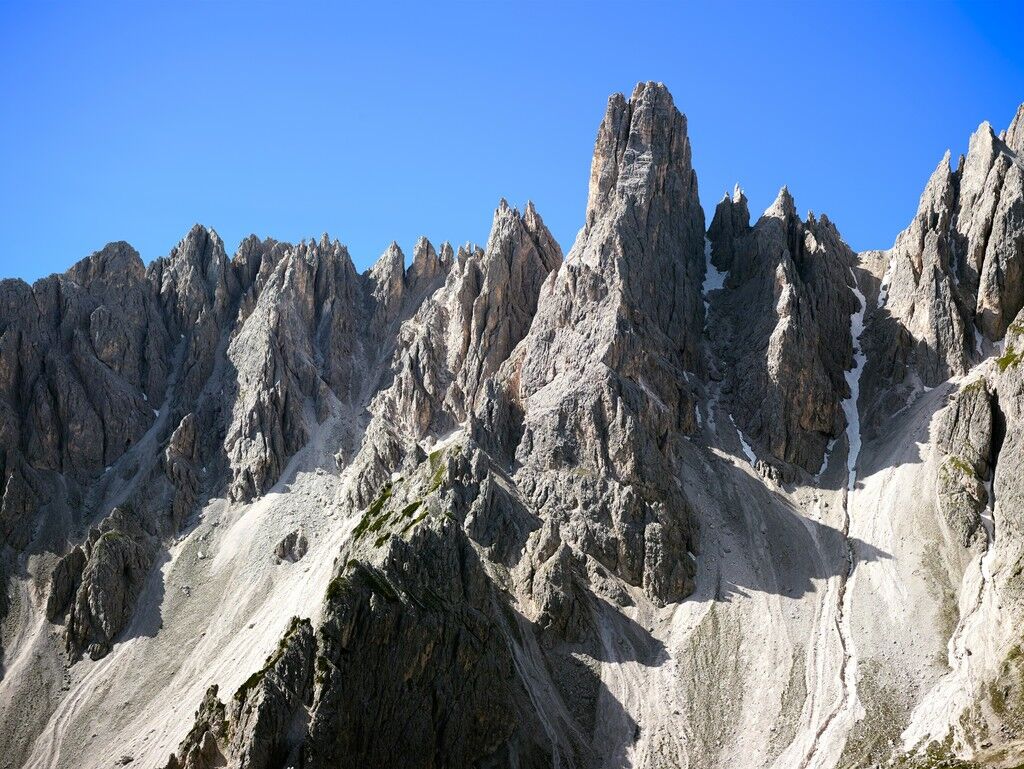 Man-Made Range, 2014
Ronald Feldman Fine Arts
Advertisement
Strebe has said she is interested in bringing cutting-edge technologies like these to the art world “because science has so much creativity and inspiring processes, which I love to involve in my work.” Some of her other works bring together literary devices with novel scientific processes. For The Scent of Joseph Beuys (2015), a tribute to the Beuys’s seminal 1974 performance I Like America and America Likes Me—in which Beuys lived for three days with a wild coyote in a New York gallery for eight hours a day—Strebe collaborated with perfume scientists to recreate the scent of “Gallery,” as well as  “Felt” and “Wall Street Journals”—two materials he used in his performance. The scents were modeled partially on data taken from olfactory molecules. 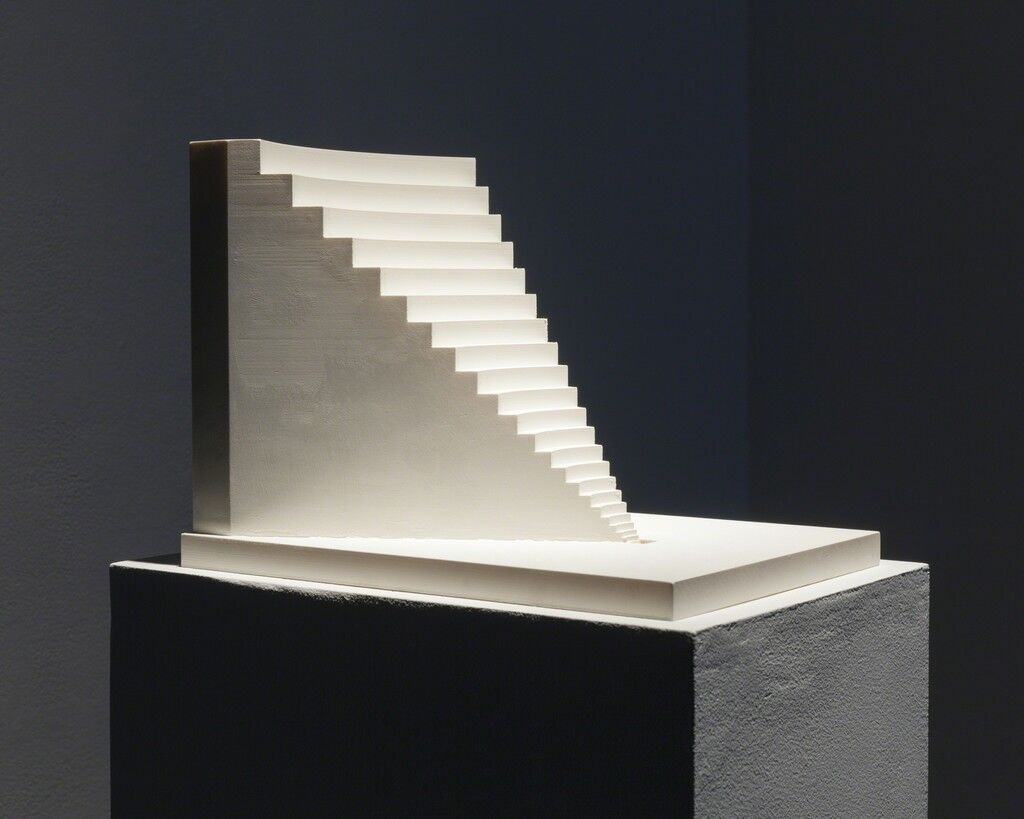 Le Scale della Divina Commedia (from Wigner's Friends), 2015
Ronald Feldman Fine Arts
In another quite complicated piece, Wigner’s Friends (2014-15), Strebe collaborated with MIT, NASA/ESA. The piece is named after a quantum science thought experiment that evolved out of the famous Schrödinger's Cat conundrum. Here, Stebe plays with notions of quantum correlation and quantum measurement. She placed one tiny telescope on Earth and gave another to an astronaut to take up to space. The telescopes were quantum mechanically correlated to show images of “all the art ever made” it its digital display. Documentation from that experiment, including 3D printed PVP models of the concepts invoked, are on display at the gallery.
—Molly Osberg
“Free Radicals: Sugababe and Other Works” was shown at Ronald Feldman Fine Arts, New York, Nov. 7–Dec. 5, 2015.
Follow Ronald Feldman Fine Arts on Artsy.
Related Stories