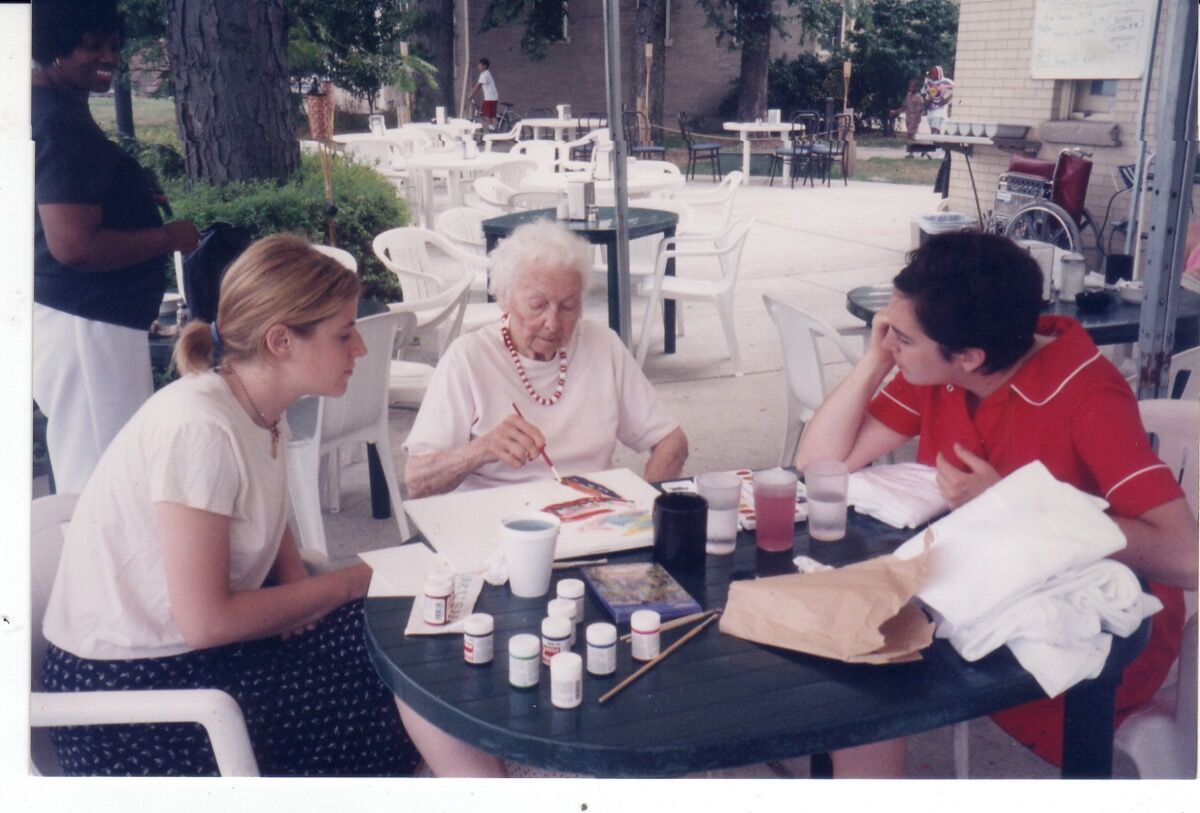 In the 1990s, Berna Huebner was struggling to communicate with her mother, the painter Hilda Gorenstein, who was suffering from Alzheimer’s disease. “I asked, ‘Mom, do you want to paint?’” says Huebner, who heads a Chicago charitable foundation. “And her eyes opened up and she said, ‘Yes, I remember better when I paint.’” Gorenstein, a marine artist who had once painted murals at a 1933–1934 Chicago World’s Fair, “wasn’t able to focus at all,” remembers Huebner. “I thought it was her hearing. I called her doctor, and without even blinking he said, ‘Why don't you call her old school and get some students to paint with her?’” Gorenstein subsequently began to paint with a handful of students from the School of the Art Institute of Chicago, her alma mater. After working with a student for several weeks she began to paint again. “It struck a chord,” adds Huebner.
Fast forward to 1999, and Huebner founded the charitable Hilgos Foundation to provide grants for art students to work with Alzheimer’s patients. A decade later, a documentary, I Remember Better When I Paint, co-directed by Huebner, shows the positive effects of art and other creative therapies on Alzheimer’s patients. It has now screened internationally and been broadcast on public television. “There are more and more people working with art and Alzheimer’s,” says Huebner. One reason is the increasing body of research supporting art’s transformative effects on those suffering from the disease.
A 2016 study by Swedish researchers Boo Johansson and Emelie Miller found that people with Alzheimer’s have a preserved capability to paint, and that painting can be used as “an appreciated and beneficial activity” for people with Alzheimer’s. Another paper last year in the International Journal of Geriatric Psychiatry found that recreation including art therapy can potentially “improve cognitive function, ability of daily living and behavioral and psychological symptoms of elders with dementia.”

According to the Alzheimer’s Association, more than five million Americans are currently living with Alzheimer’s. One in three elderly people die with Alzheimer’s or another form of dementia—the umbrella term for a group of symptoms affecting the brain, including Alzheimer’s, a progressive condition that generally begins with loss of memory function. Painting has helped numerous artists, professional or amateur, cope with the progress of their condition.
The American artist William Utermohlen was diagnosed with Alzheimer’s in 1995, though signs of his illness began to surface some five years prior. According to Parisian gallerist Christophe Boïcos, who represents the artist’s estate, Utermohlen is the only known artist to have depicted himself through all stages of his disease. His self-portraits have been repeatedly exhibited in the United States, including at Harvard University’s Fogg Museum, and will go on view at the Kunstmuseum Thun in Switzerland this February.
The pictures, when viewed, clearly show the progression of his Alzheimer’s. Though often expressionistic, and influenced by his German heritage, his work gradually becomes more extreme and redolent of
Francis Bacon
, as the 1990s wore on. Perspectives shift and details fall away, leaving more distorted, abstract shapes. At points, his face is framed neatly between black lines, suggesting he felt “boxed in” by his struggles with communication. Utermohlen died in 2007.
“He was encouraged to do self-portraits by his nurse at the time of his diagnosis,” says Boïcos over the phone. “He was encouraged to express himself through drawing, I think that was very helpful in concentrating his mind, because at that point he couldn’t speak. But he could certainly communicate via drawing and painting, which was a function that was very ingrained. The side of the brain that was visual was less affected than the verbal side.” Boïcos said the artist’s lucidity varied markedly during the progress of the condition. “One of the main frustrations Alzheimer’s patients have is they are conscious but they are not able to communicate. If they can express what they are feeling through drawing and painting they—even a non-professional patient—will find a lot of solace in doing so.” 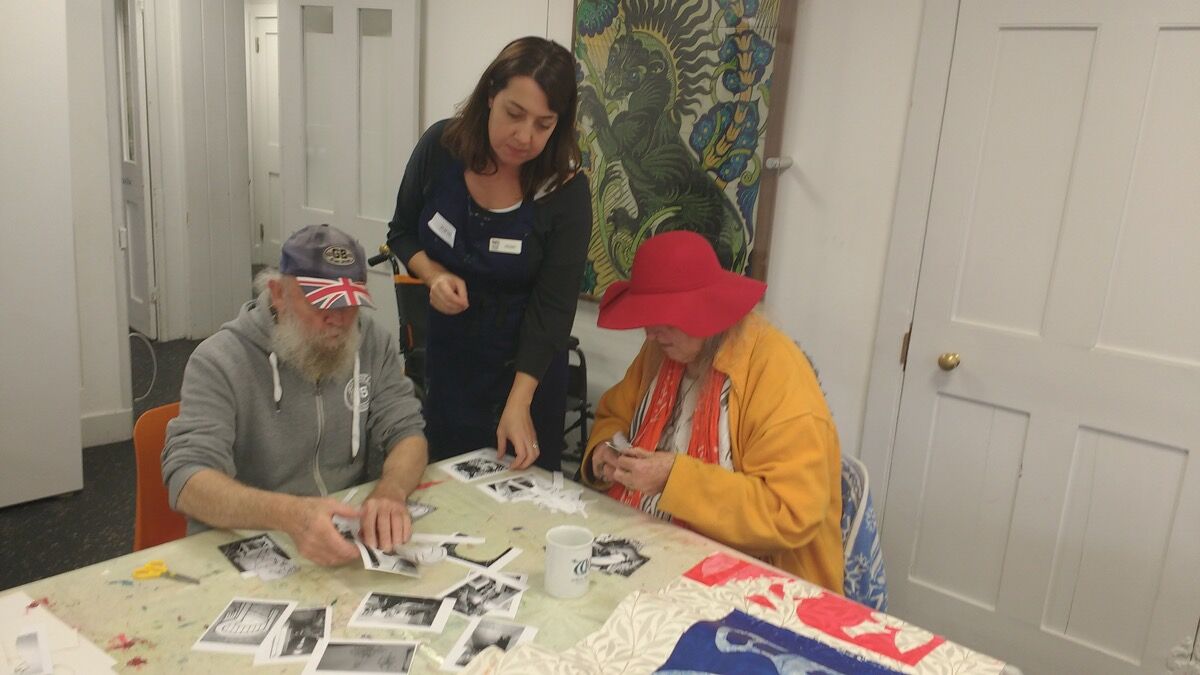 Photo of the Printmaking Program at William Morris Gallery, courtesy of Arts 4 Dementia.

Advertisement
For those caring for patients with Alzheimer’s, the effects of art therapy workshops can be transformative. Judy Holstein, a drama therapist with almost two decades of experience working with Alzheimer’s and other patients in Chicago, speaks of art—a painting, drawing, or piece of music—being used as a stimulus to work with patients’ memories. People can respond verbally, if possible, or non-verbally, using art. “It might be sculpting with clay, or easy to manipulate material that doesn’t take as much strength in the hands,” she says. She describes witnessing the positive effects of crafts sessions. “Through group work, people with dementia, who usually get very little out of social interactions, can add their personal contributions and work as a group to come up with something that could be displayed in a museum.”
London charity Arts 4 Dementia was founded in 2011 by art historian Veronica Franklin Gould. Arts 4 Dementia organizes workshops for people affected by dementia, at arts institutions (around 850,000 people in England and Wales suffer from the condition). According to the organization’s chief executive, Nigel Franklin, workshops have been held at London’s Estorick Collection of Modern Italian Art, Kenwood House, the Wallace Collection, the National Portrait Gallery, and the Photographers’ Gallery.  A recent printmaking workshop at London’s William Morris Gallery invited participants on “a creative journey through the collections” and to “explore different printmaking techniques.”
“We deliver workshops for people with early-stage dementia, as well as spouse, carer, or friend,” he says. “It improves people’s self-worth, and we believe people should really go for it. We believe in setting the bar high.” He says the aim of these workshops is to “get people to live better and longer at home,” to delay a need to move into a care home. “People should be engaging rather than feeling as though they are observing.” 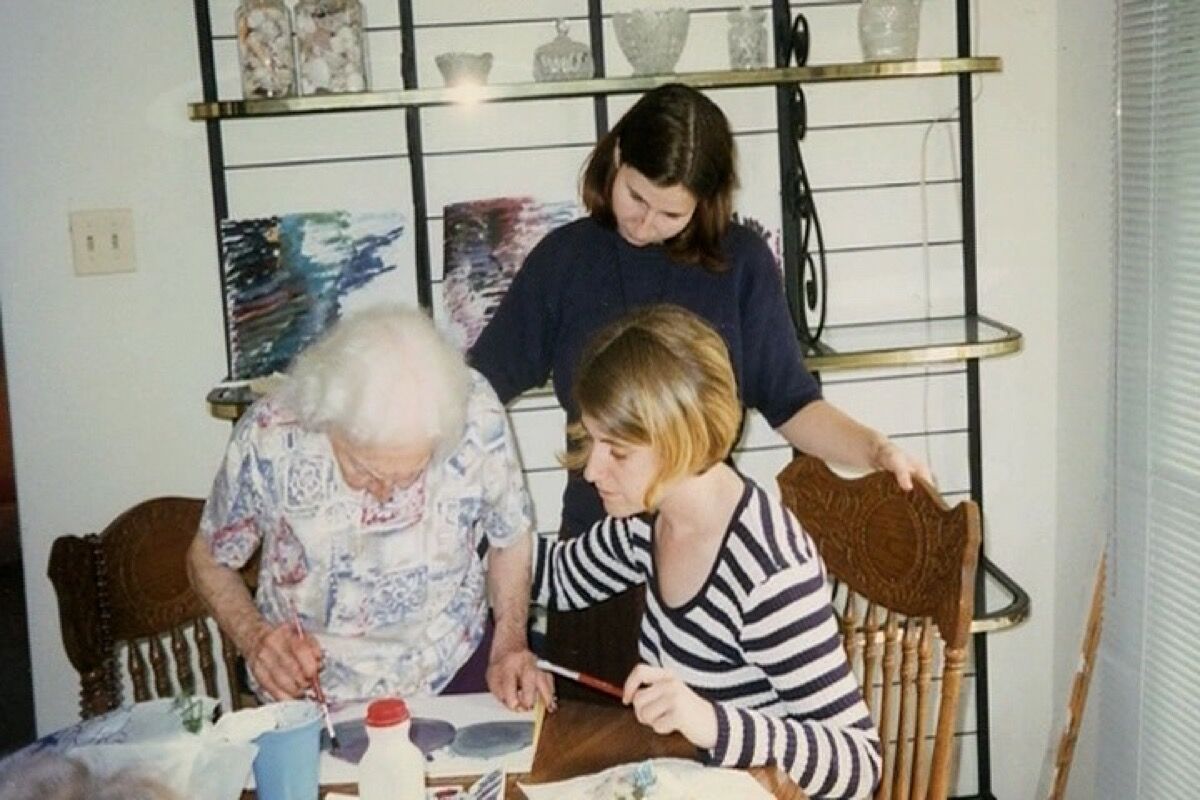 By working with gallery education teams, Franklin says the charity can train gallery and museum staff to hold similar workshops in the future. “Our workshops are centered on the person, we ask workshop leaders to focus on who people are,” he says. “To ask what people did in their careers, their interests, really working with the person. Trainers also get to understand the different kinds of dementia or Alzheimer’s.”
Over the recent holidays, a researcher at the University of Liverpool found that through analyzing work by famous artists, one might predict which of them would go on develop Alzheimer’s. The relationship between brain activity and creativity is still little understood, and yet is yielding scientific discoveries year after year. In the short-term, as a therapeutic activity, artmaking’s ascendancy is also gathering pace.
“You bring a person who is suffering perhaps from Alzheimer’s, you put them in front of a painting, somehow the painting says something to them,” says Tony Jones, current President of Kansas City Art Institute (formerly president of The School of the Art Institute of Chicago), in I Remember Better When I Paint. “Somehow they begin to have a dialogue with the picture.”
Rob Sharp
Related Stories