Documenta 14 Struggles to Make a Statement about Our Uncertain Times 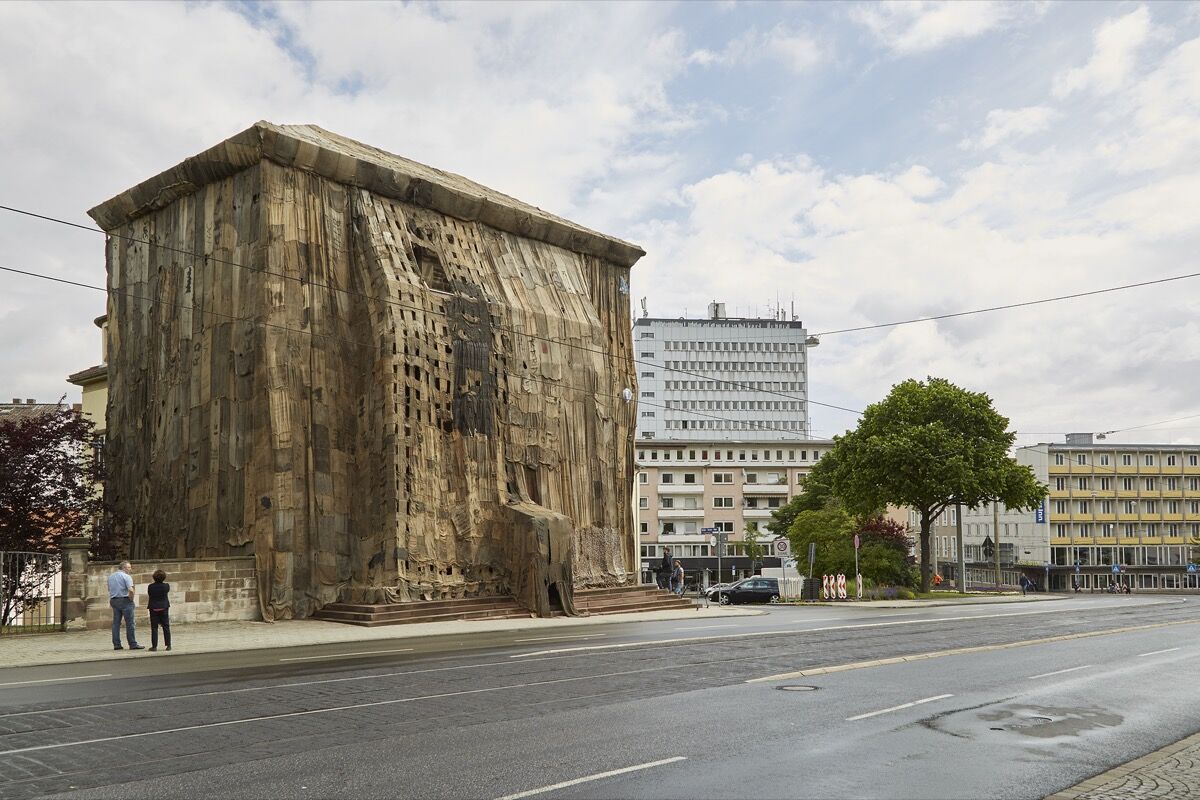 We are living in an age of uncertainty, documenta 14 curator-at-large Bonaventure Soh Bejeng Ndikung said, opening the second chapter of the quinquennial exhibition on Wednesday. The show, widely expected to issue a statement on our times, is this year split between two locations—Athens and Kassel—and the past and present of both cities is deftly interwoven here.
Ndikung is one of an extensive team of curators, led by artistic director Adam Szymcyzk. Szymcyzk’s choice to share the event with the Greek capital is in no small way tied to the uncertainties that are currently rattling our fragile planet and global community. Athens, of course, has seen a steady stream of tens of thousands of migrants arrive on its shores from the Middle East and Northern Africa since 2015, putting further strain on an already devastated economy. Its citizens have also endured severe austerity measures (not to mention international humiliation) imposed by its primary creditor, Germany. 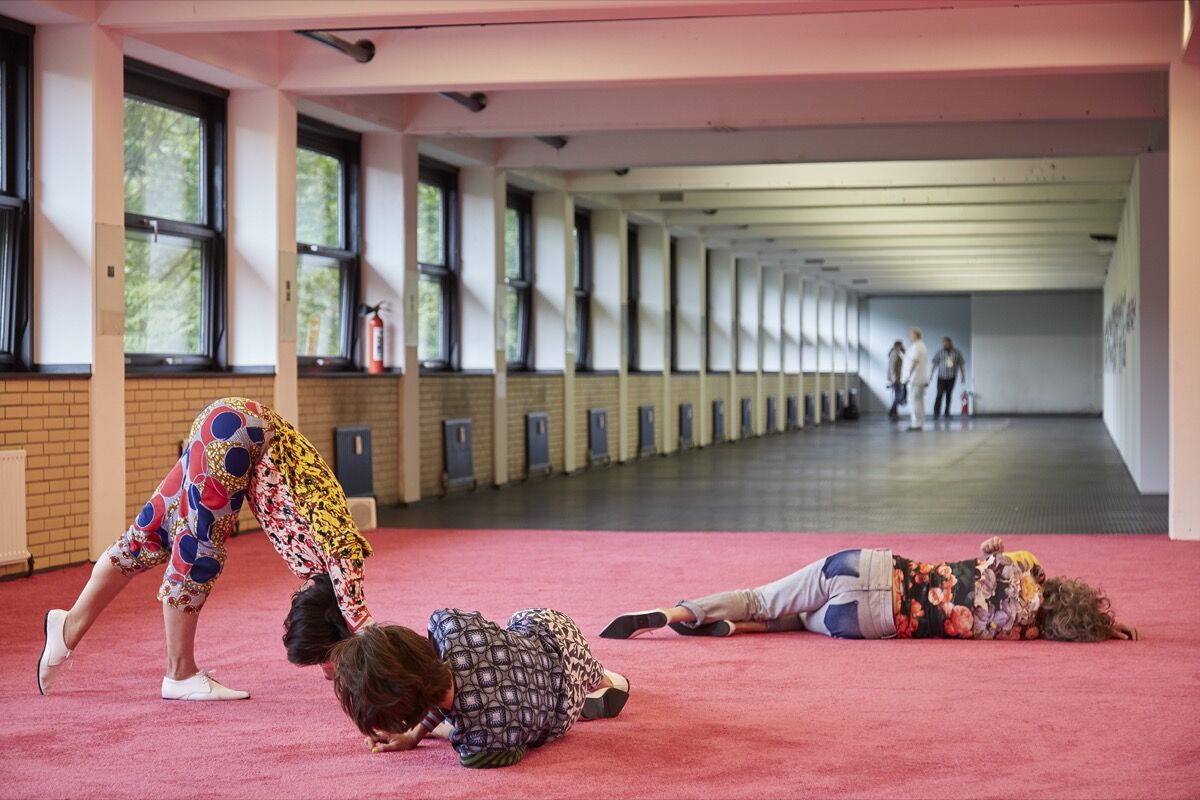 Installation view of documenta 14, 2017. Photo by Benjamin Westoby for Artsy.

Documenta was originally founded to create cultural unity between East and West Germany during the tense and fractious years of the Cold War. By uprooting elements of this historically loaded exhibition from the quiet, provincial town of Kassel, and placing them in the relatively unstable environment of Athens, Szymcyzk and his team have asked viewers to approach their global neighbors with empathy. “Documenta 14,” said another of its curators, Paul B. Preciado, “is a process of becoming the political subjects of history.”
The presence of Greece remains strong across the Kassel edition. And if uncertainty is best conveyed through experiences of confusion and dislocation, then this component of documenta 14 has certainly achieved its goal (though perhaps by accident). To call the exhibition scattered doesn’t quite capture the disjointed, often haphazard assortment of artworks that visitors find across 35 venues in the city, which together house works by hundreds of artists—many of which, in a gesture of generosity and reciprocity, have come directly from Athens’s EMST museum, a collection of works by Greek and international artists that’s been installed in the Fridericianum.
Across Kassel, information is scant. Numerous works are accompanied by barely a shred of context. And in a handful of locations, the works’ installation borders on incoherent. 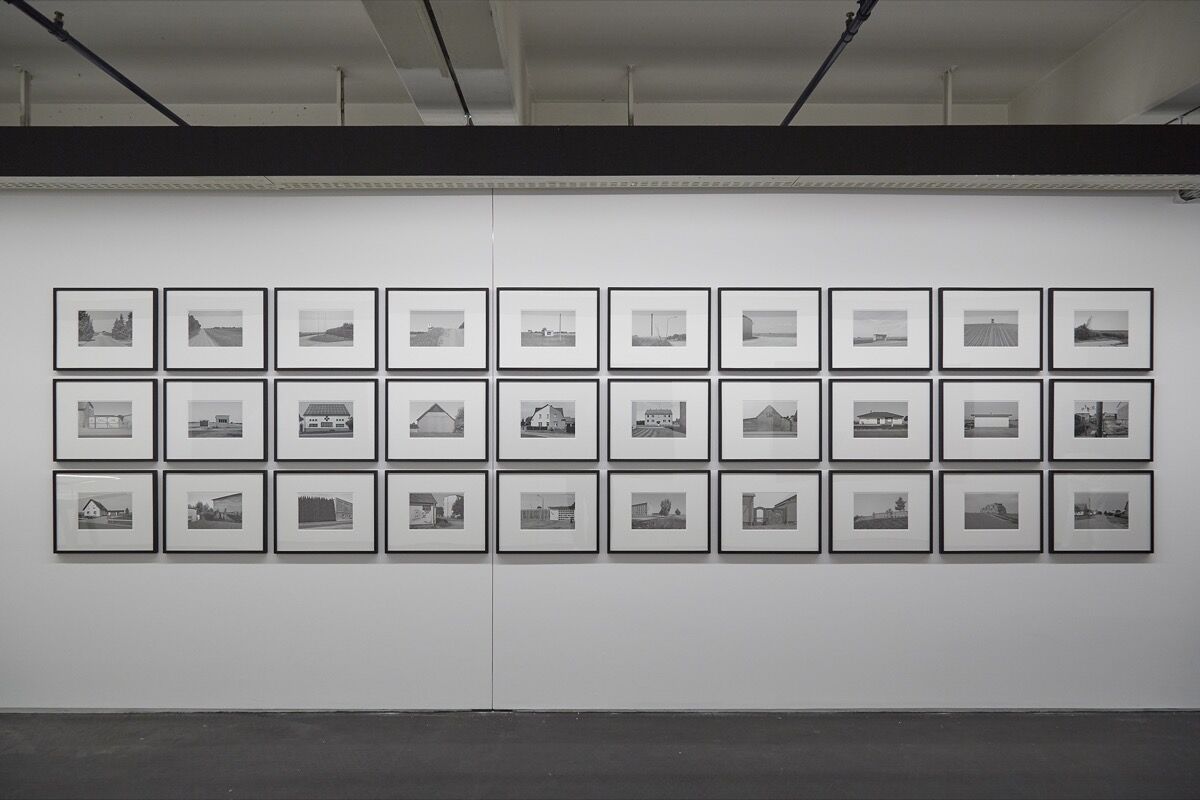 Installation view of work by Ulrich Wüst at documenta 14, 2017. Photo by Benjamin Westoby for Artsy.

Advertisement
A viewer might find herself, for example, in a room that’s shared by a group of performers locked into a frozen formation on a plush, magenta pink carpet; a series of whimsical mail art pieces by
Moyra Davey
applied to the wall;
Ulrich Wüst
’s desolately empty black-and-white photos of the German Democratic Republic; and Artur Żmijewski’s silent films showing men with amputated limbs, engaged in exercises—post-World War II, one presumes? The work is strong, but when shown together, there is little to hold on to, hardly a thread to pull—save, perhaps, for the invocation of Europe’s violent past.
And therein lies documenta 14’s most cohesive throughline: that of our shared history. Various themes simmer up at moments throughout the exhibition—the rampant path of capitalism and nation-building (
Michel Auder
’s 14-channel video The Course of Empire, 2017, installed in the derelict former underground station of Kassel’s Hauptbahnhof, plays out a collage of scenes showing military invasions, wasted towns, and industrial production and consumption); the experience of migration (Angela Melitopoulos’s video Crossings, 2017, partly shot in a refugee camp in Lesbos, captures voices of anonymous migrants as they learn the English words, “rejection,” “love,” and “care”); and 1960s-style alternative communities and nature-worship (archival documents of
Anna Halprin
’s San Francisco dance circles or footage of “ecosexuals”
Annie Sprinkle
and Beth Stephens being wedded to Planet Earth in a ceremony). 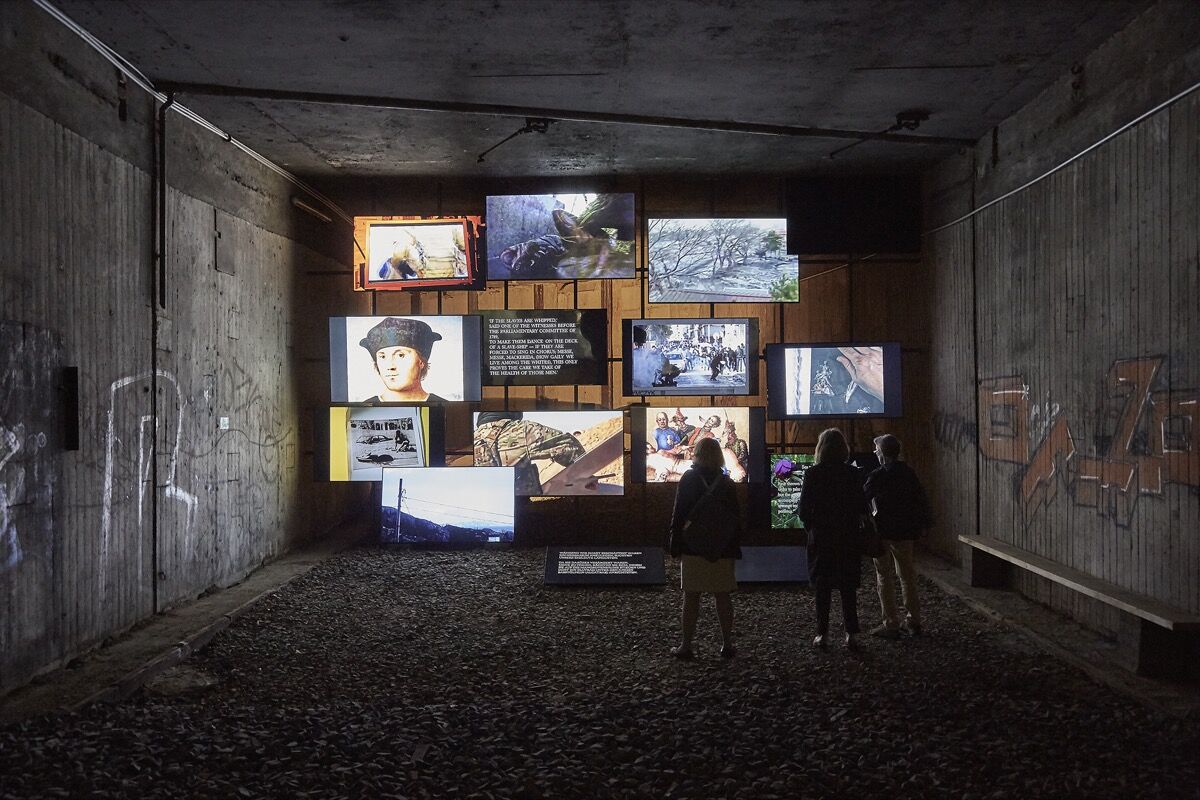 But the exhibition excels when it mines the recent and earlier history of Kassel, excavating its stories and turning the city into a microcosm of phenomena playing out around the world. It does so across two venues, in particular, which are the strongest presentations of documenta 14 in Kassel: the Neue Galerie and the Neue Neue Galerie (Neue Hauptpost).
The Society of Friends of Halit, for example, a coalition of activist groups that form part of documenta 14’s public programs, is investigating the 2006 murder of local Kassel resident Halit Yozgat, shot dead in a family-run internet café, the ninth in a spate of racially motivated killings of migrants by a neo-Nazi terrorist group. The sole living member of the trio of National Socialist Underground (NSU) members believed to have carried out the murder is now on trial in Munich.
However, Forensic Architecture, a research agency based at Goldsmiths, University of London, have worked to re-enact the events of the shooting and dig into the clues left embedded in the space—principally to determine whether a Hessian state secret service agent named Andreas Temme lied in his testimony before the court when he said that he did not hear gunshots, notice the smell of gunpowder, or see Halit’s body. The group has proven that this would not have been the case had Temme been in the café when the murder took place—and they have proven that he had could not have exited the café in time for the perpetrators to enter unseen. Needless to say, this raises questions. 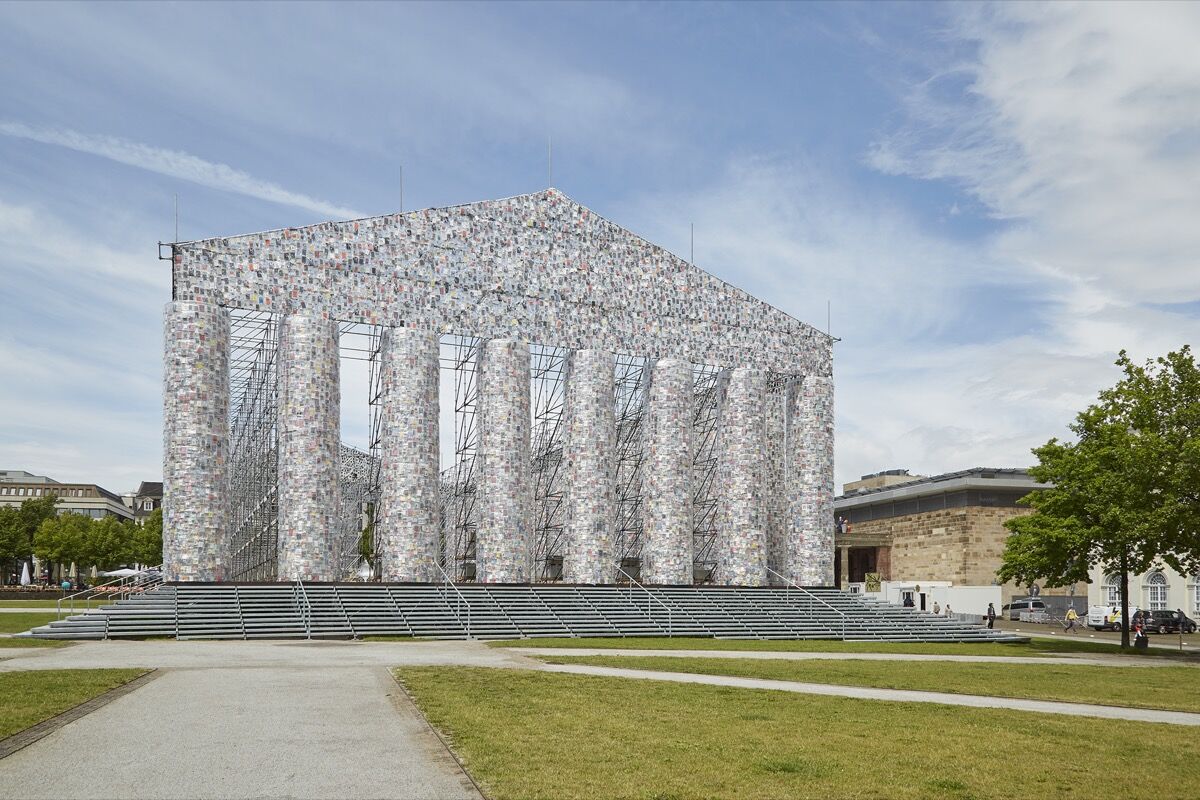 2 Images
View Slideshow
The presence of an active investigation within the exhibition space of the Neue Neue Galerie (Neue Hauptpost) shows how Kassel has been touched by larger themes of immigration and racial violence, as well as the way in which the city’s space is a palimpsest of histories. Similarly, Ahlam Shibli’s Heimat (2016–17) follows the experiences of two migrant communities that arrived in Kassel in the mid-20th century, capturing them in portraits, accompanied by text that details their efforts to establish a new home and integrate themselves into the fabric of the place.
The seismic shifts that took place during and after World War II, prompting mass migrations, are further invoked and connected to the ancient history of Greece by way of the German (and Nazi) fascination with the classical world. Alexander Kalderach’s romantic renderings of the ancient Greek Parthenon, such as Der Parthenon (1939), on view in Kassel’s Neue Galerie, caught the eye of Adolf Hitler, as the wall text notes. And the curators push this connection back still further, showing the German landscape painter (and father of infamous Nazi-era art dealer Cornelius Gurlitt) Louis Gurlitt’s sun-soaked Akropolis (ca. 1858), which he painted on a visit to Greece (when the country was ruled by German monarch, King Otto I). 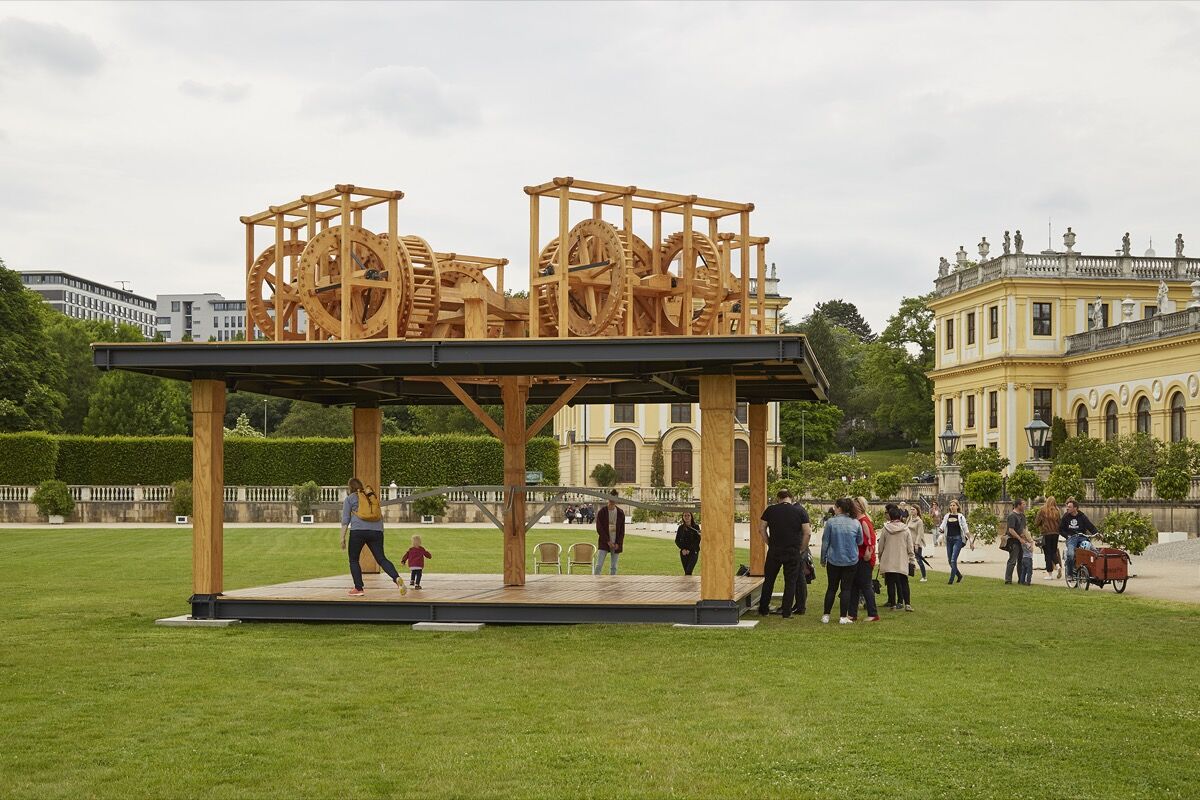 Kassel itself does not escape this study in the German infatuation with Greek civilization.
Leo von Klenze
, an artist-architect whose career began in Kassel (and who built Kassel’s Ballhaus building, which is one of documenta’s venues), lived for years in Athens, working on a city plan for King Otto I, and would eventually model his Walhalla—which still sits today above Germany’s Danube and appears in the form of von Klenze’s own painting in the Neue Galerie—on the Parthenon.
And then, of course, there is
Marta Minujín
’s giant Parthenon of Books (2017), which currently dominates Kassel’s Friedrichsplatz, a recreation of her 1980s installation in Argentina following the end of the country’s repressive Dirty War, for which she assembled a replica Parthenon out of metal scaffolding and thousands of books that had been banned during the military dictatorship. It’s a monument to freedom and humanity, and here functions as a rebuke to the Nazis’ deployment of classical civilization as an excuse for ethnic-cleansing and the pursuit of power. 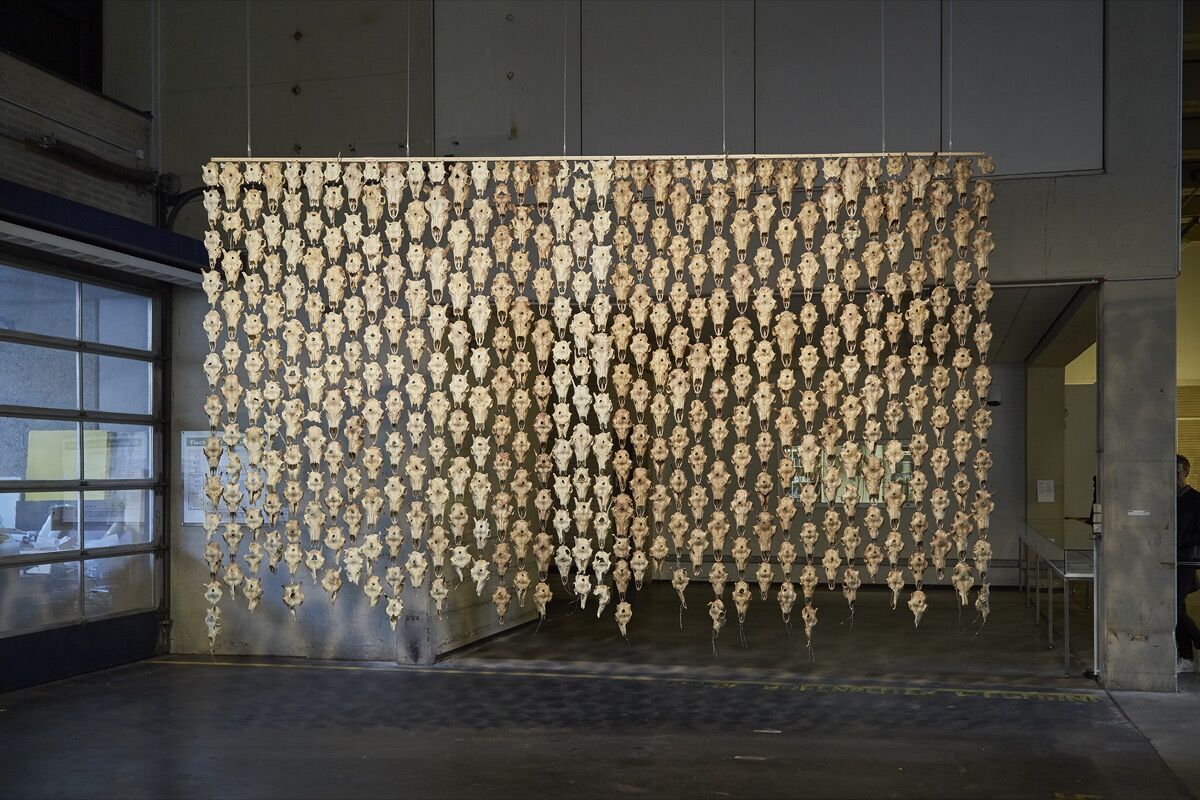 Across documenta 14, alternative “anti-monuments,” as curator Candice Hopkins calls them, stand as markers not of authority but of history’s brutalities—as in
Antonio Vega Macotela
’s The Mill of Blood (2017), a reconstruction of the minting machine built by Spanish colonizers in South America and powered by indigenous and African slaves, or even Máret Ánne Sara’s curtain of reindeer heads in the Neue Neue Galerie (Neue Hauptpost), memorializing Norway’s more recent history of reindeer culling.
But documenta 14 doesn’t find only endless doom and gloom, death and exploitation, in march of human history. Mercifully, for worn-out visitors, there is some relief. Romuald Karmakar’s searingly moving videos Byzantion and Die Entstehung des Westens: Von den Anfängen in der Antike bis zum Fall von Konstantinopel (both 2017), the solitary installation in Kassel’s Orangerie, invoke the end of the Byzantine Empire and the fall of Constantinople through the heart-wrenchingly beautiful singing of choirs in two churches in Russia and Greece.
And
Agnes Denes
’s peaceful The Living Pyramid (2015/2017), composed of steps of flowers and plants, is a quiet monument to geological time and the natural world. 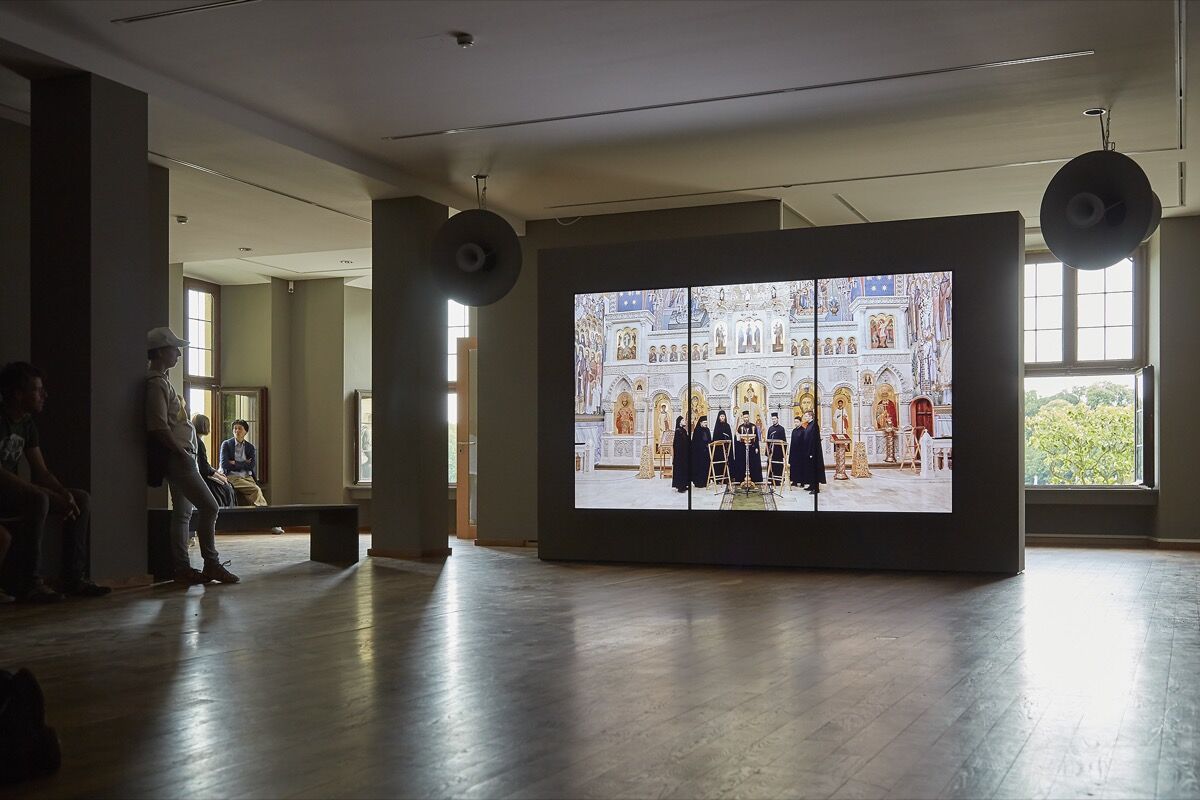 Installation view of work by Romuald Karmakar at documenta 14, 2017. Photo by Benjamin Westoby for Artsy.

There are also stories of individuals who have resisted persecution and intolerance, such as Lorenza Böttner, born Ernst Lorenz Böttner, who lived in the city of Lichtenau, not far from Kassel, in the 1970s. Lorenza, who identified as a transgender female, had both arms amputated as a young boy, following a crippling electric shock induced by climbing a pylon.
Later in life, as Lorenza, she would go on to study at the Kassel School of Art, and learn to paint with her feet and mouth. Some of her canvases are on view in the Neue Galerie: romantic self-portraits that show her feminized, armless form, some of which place her within archetypal female imagery. She would become an ardent advocate for disability rights, performing her foot-and-mouth painting in public and arguing for the acceptance and canonization of disabled artists.
Many of the subjects of this documenta, curator Paul Preciado offered, could have been the subjects of ethnographic vitrines. “We have been given agency to destroy the vitrines,” he said, urging visitors to see documenta 14 as a “new institution in transition.” 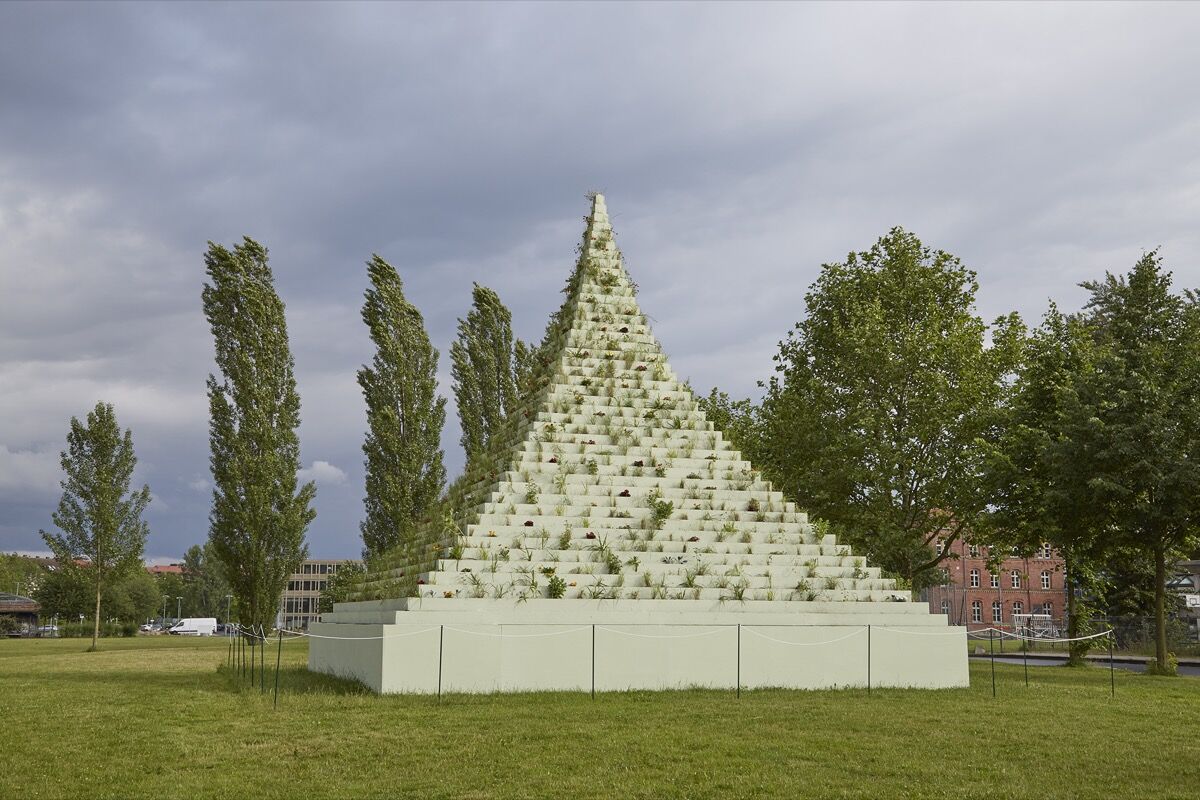 Perhaps it’s that distrust of institutions—and of any power structures at all—that has led the curators of documenta 14 to avoid any one single narrative. “We have always been against interpretation,” Szymcyzk said. “The great lesson is that there is no one lesson.” What exactly that means is anyone’s guess. There’s no possibility of looking without interpretation; it’s the very basis of drawing meaning from the world around us.
But if there’s one idea that documenta 14 does put forth with success—the meaning that we can draw from all of this—it’s precisely that of the collective experience of being subject to power, and doing our best to refuse it, wherever we live.
Tess Thackara
Related Stories 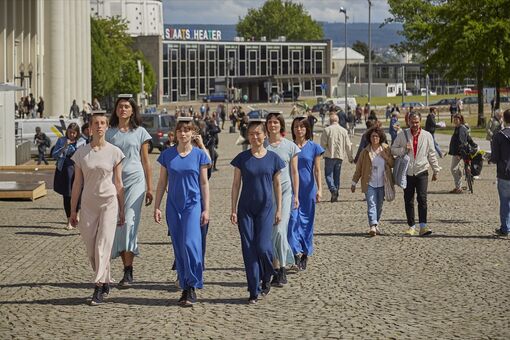