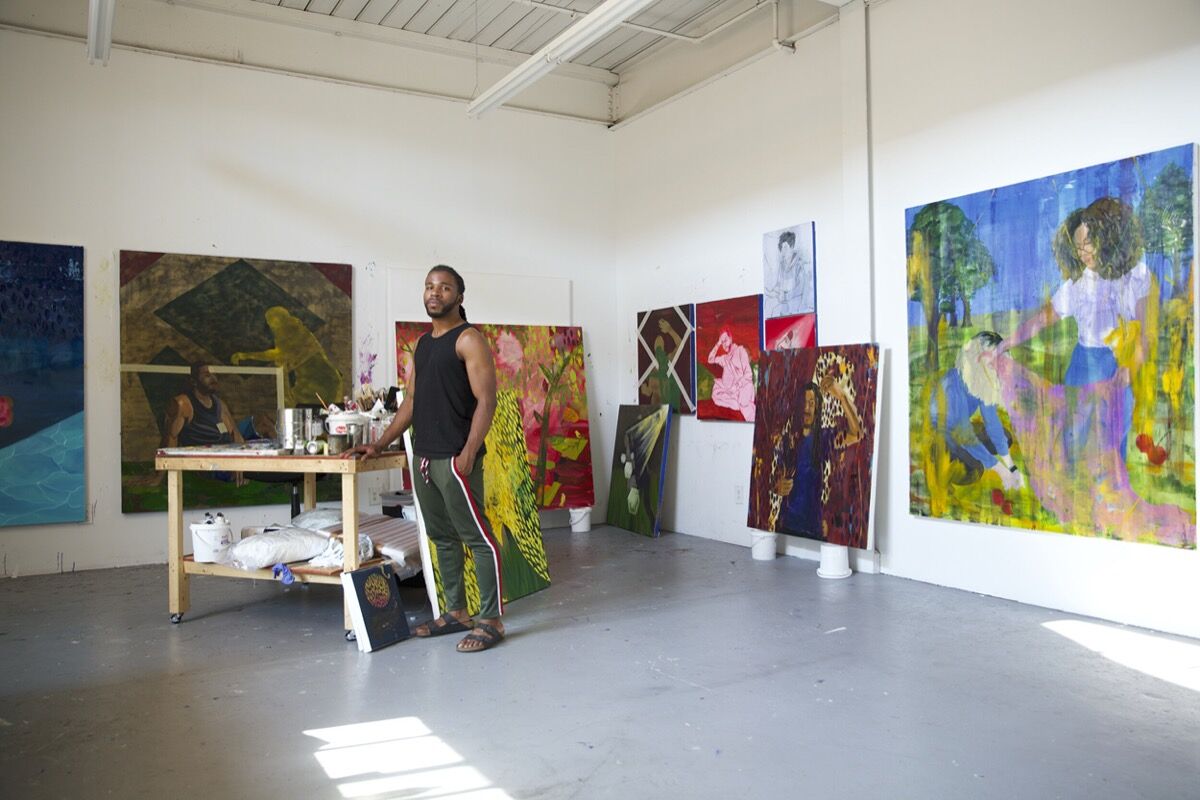 Books play a major role in the life and work of the New Haven, Connecticut–based painter
Dominic Chambers
; he has been an avid reader since he was young. “I wouldn’t be able to make my art without reading,” he said in a recent Zoom interview. He was particularly influenced by the magical realism in Junot Diaz’s The Brief Wondrous Life of Oscar Wao. “I realized how he could utilize magical realism to talk about the things that have happened to him and the aftereffects of generational trauma,” said Chambers, reflecting on the novel. When exploring Black identity, Chambers found that these topics—magic, imagination—were seldom part of the conversation.
On view through December 13th, “Like the Shape of Clouds on Water,” Chambers’s current exhibition at the August Wilson African American Cultural Center in Pittsburgh, Pennsylvania, is his first U.S. solo show since graduating from Yale’s MFA program last year. His vibrant paintings shed light on the many facets in the Black community that are typically overlooked, highlighting self-preserving, restorative activities such as reading, resting, and meditating in quiet, internal fantasies. 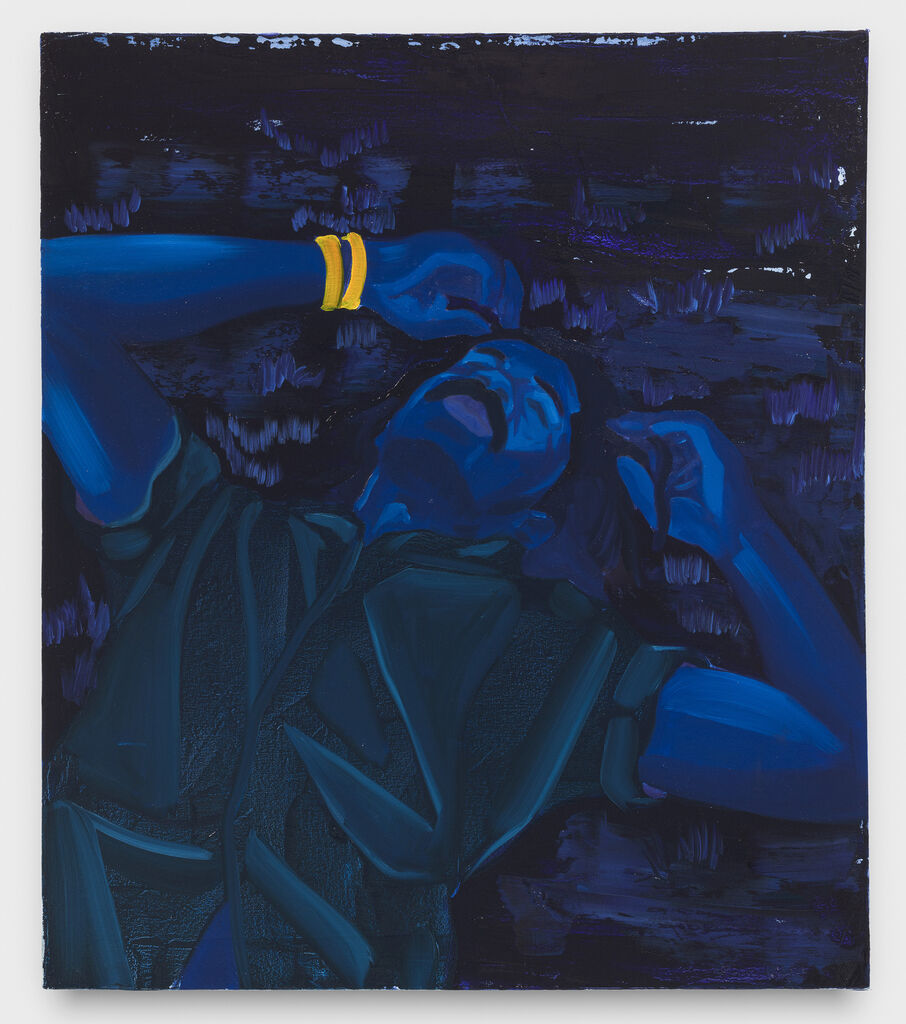 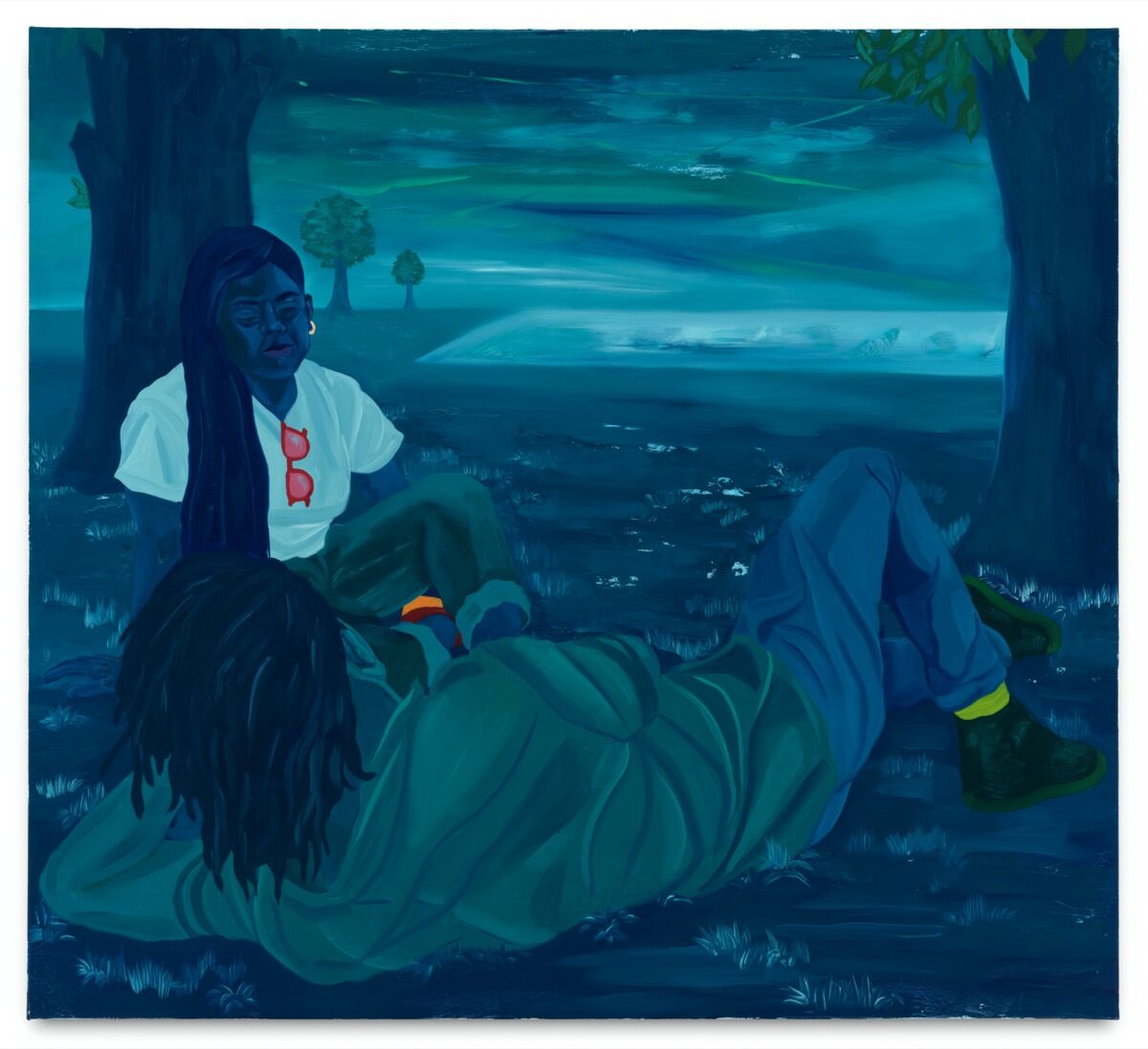 In painting his friends and fellow artists, Chambers builds upon the burgeoning legacies of contemporary Black figurative painters and portrait artists such as
Amy Sherald
,
Kehinde Wiley
, and
Vaughn Spann
, documenting and preserving the Black experience through portraiture and distinctive storytelling. Like these artists, his work directly addresses the inadequate representation of Black intellectuals in art-historical paintings. Chambers, however, adds a magical twist to this canon.
By deconstructing negative clichés, he reveals what is possible when Black individuals rest and tap into their innermost imagination. His figures are often seated or in repose, completely immersed in a book and reclined on sofas that have been teleported into the middle of a park or a grassy field. Discussing earlier works, Chambers explains how these surreal settings were inspired, in part, by leisure fields in Greek mythology—places where the heroic and virtuous go to rest. “I wanted to create a scene of Black boys who could be in these flower fields; in a place that wasn’t necessarily common to the Black male narrative,” he said. “What does it mean for a Black man to be okay with flowers?” 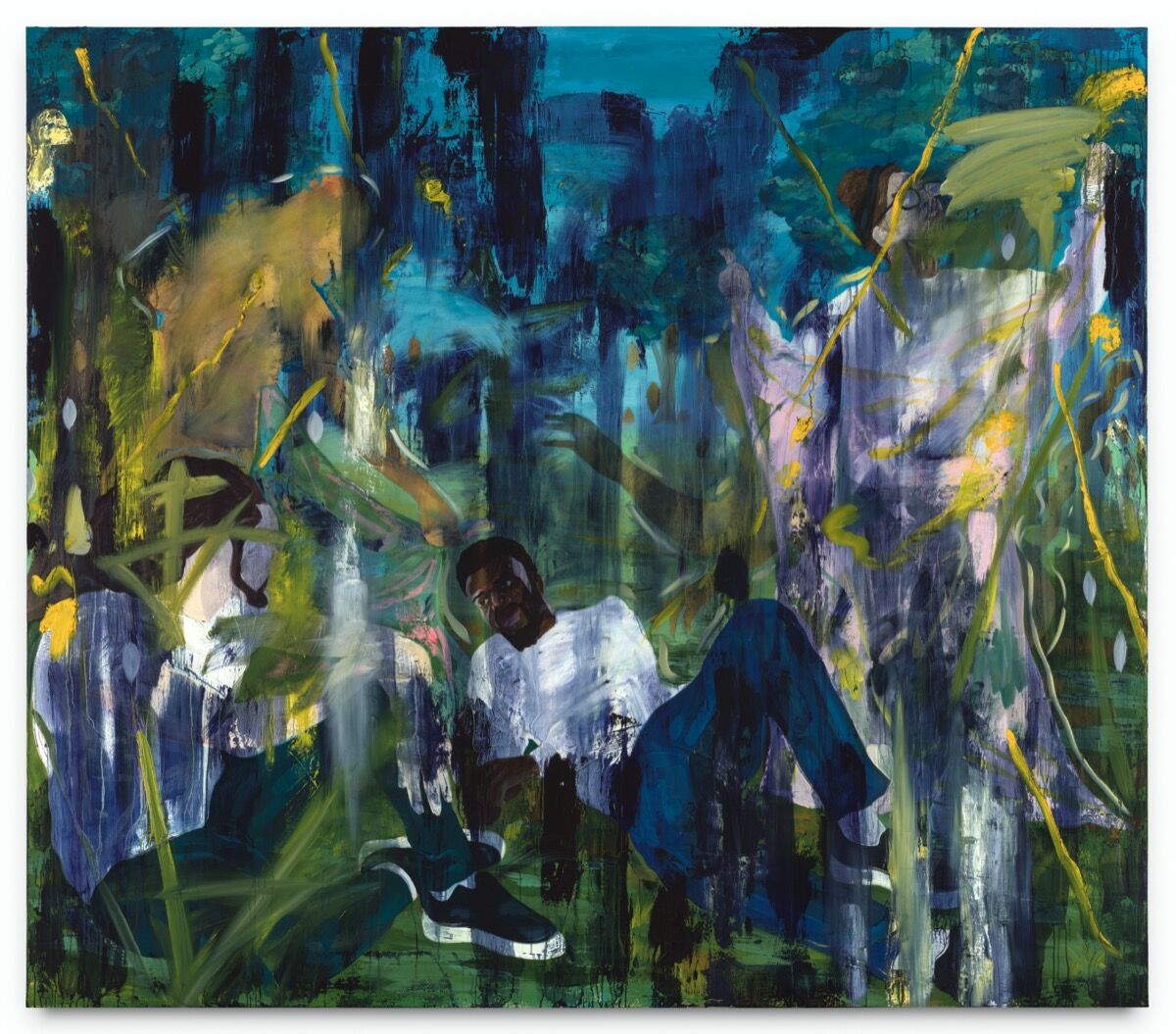 Advertisement
Recently, Chambers has been overlaying his paintings with abstract color blocks inspired by
Josef Albers
, using the German-American artist’s theories on color as a metaphor for race relations and how societal perception affects Blackness. In Albers’s paintings, the perception of any given color is dependent on how they relate to the colors around them—through his work, Chambers argues the same could be said of race. “Color is a relationship and it’s all about perception,” he explained. “I think about that as a visual metaphor for Blackness—how perception determines different contexts for and associations with Blackness.”
Another frequent motif in Chambers’s work is a raindrop pattern that forms a veil-like curtain of intimacy for his subjects. This imagery is a direct reference to the activist and sociologist W.E.B. Du Bois, who used the veil and the concept of double consciousness to explain a phenomena present within the Black experience and community. In his book The Souls of Black Folk, Du Bois articulates the veil and double consciousness as the unseen ways in which Black individuals are constantly having to look at themselves through the eyes of others. 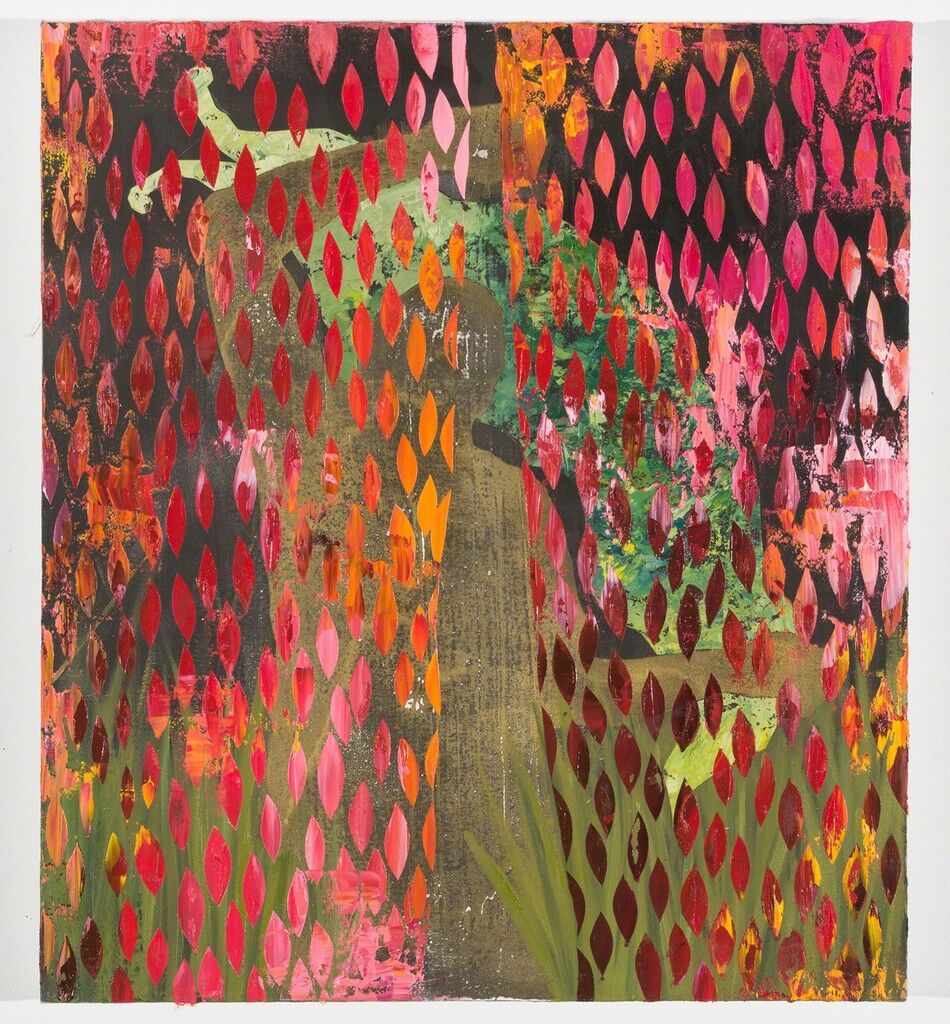 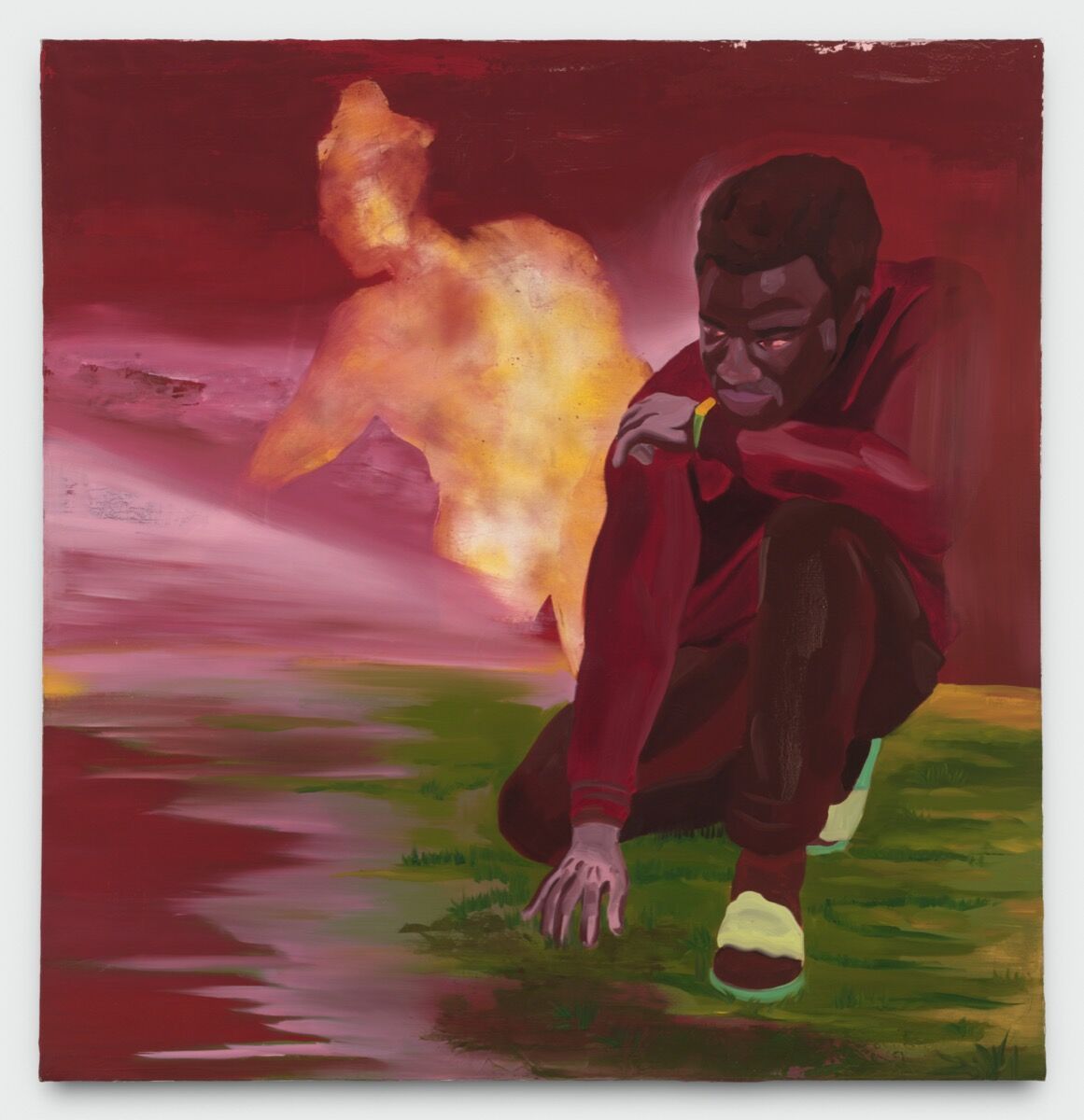 For Du Bois, double consciousness and the veil were interchangeably embodied in the color of African American skin, indicating the differences Black bodies represent from the cultural “norm”—whiteness impairing not only white individuals’ ability to see African Americans as true Americans, but also African Americans’ ability to see themselves outside of race. In Chambers’s series “Wash Paintings,” the veils operate both as visual metaphors and as a way to block out the private worlds his subjects are engaged in, allowing them to enjoy their fantasies unperturbed, fully immersed in literature or in conversation.
While books are featured frequently throughout Chambers’s oeuvre, none of them are identifiable—all of the book covers in his work are blank. This omission is intentional, redirecting the attention of the viewer from a specific book title or point of reference to instead focus on the space the subjects are occupying and the scene as a whole. “The subject is not aware that it’s being observed by me,” Chambers explained. “He’s not bothered, he doesn’t need to care because what he’s doing is engaging in a space where he matters. This is his space.” Chambers stresses stillness as a transformative space where imagination and restoration is created and maintained. As the spectator, one is viewing the psychic activity of a book transporting these individuals, allowing them to transcend.
Kendra Walker
Related Stories