What Is the Door to Jackson Pollock’s Room at the Chelsea Hotel Worth? 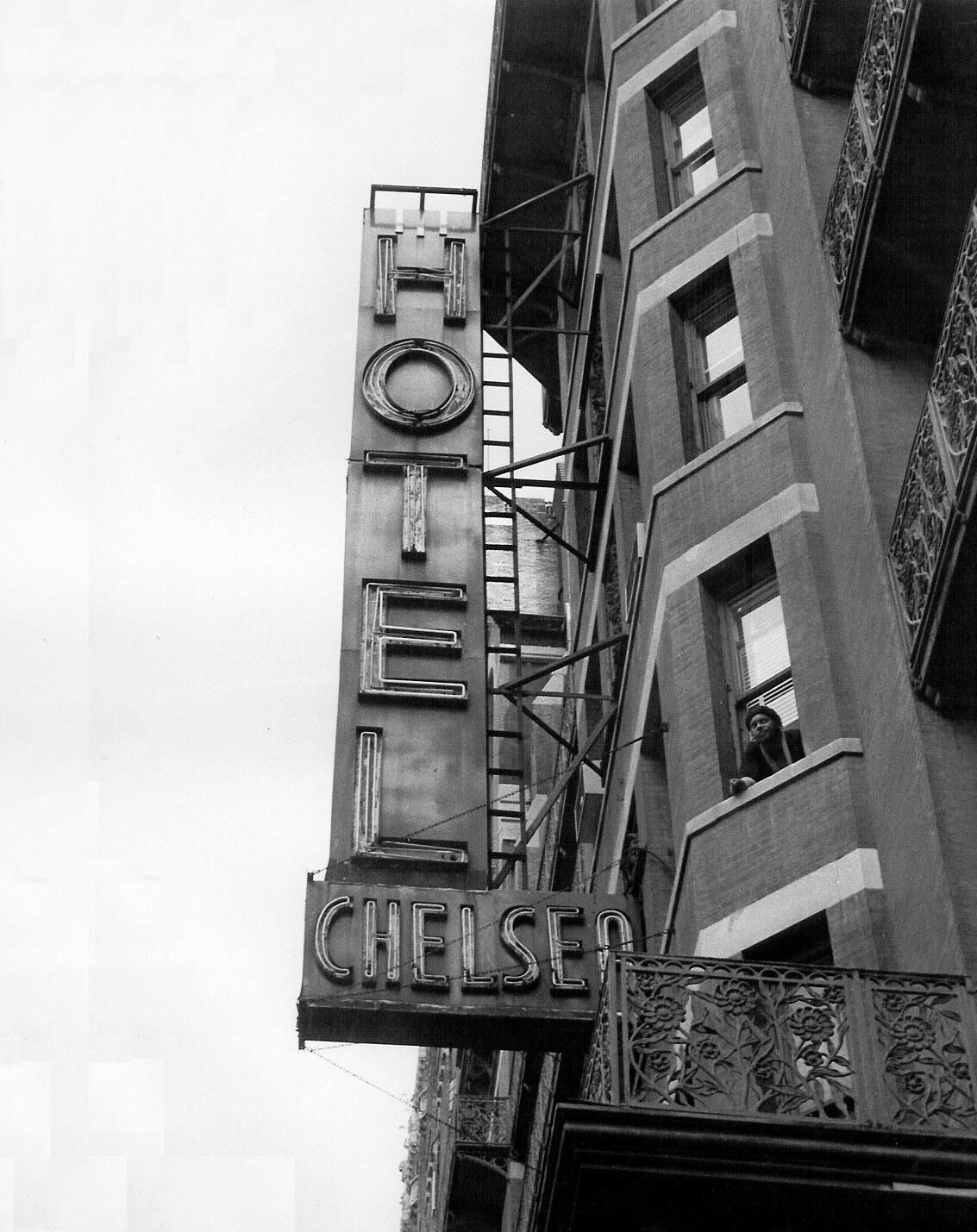 Close up of the hotel's facade, 1977. Image via Wikimedia Commons. 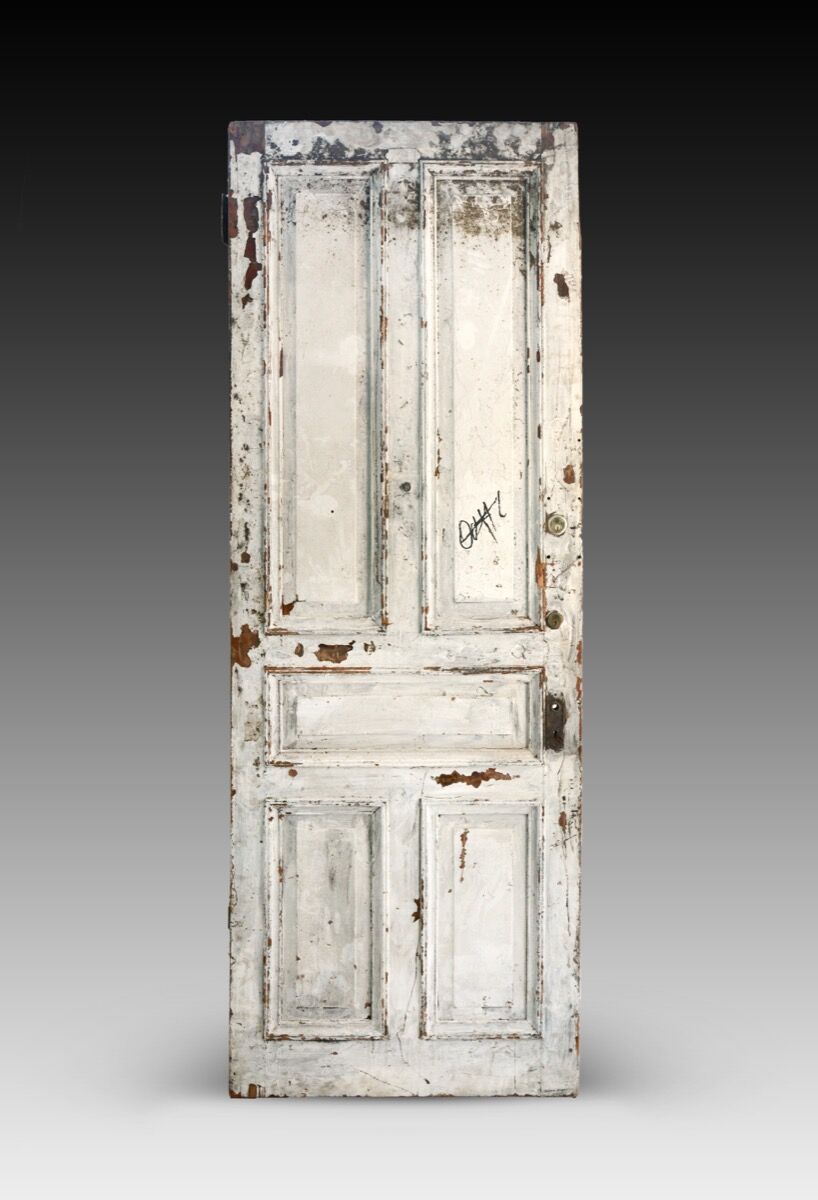 Bob Dylan’s door at the Chelsea Hotel. Courtesy of Guernsey’s.

This month in New York, one man’s trash becomes another man’s auction lot. In a city known for both its garbage-lined avenues and its glimmering, eternal sense of possibility, it should come as no surprise that a shrewd homeless man, Jim Georgiou, has partnered with Guernsey’s auction house to sell off 52 distressed wooden doors previously tossed to the curb. These, however, have a more interesting pedigree than your typical household fixtures—cultural figures from
Jackson Pollock
and
Andy Warhol
to
Bob Dylan
and
Patti Smith
have all lived behind them.
Georgiou and his dog, Teddy, lived at the iconic residential Hotel Chelsea for about 10 years following the September 11 attacks. Georgiou consistently struggled to pay rent; he had to move out due to financial hardship around late 2011. Around this time, hoteliers Richard Born and Ira Drukier (best known for their trendy, upscale properties such as The Jane, The Greenwich, and The Maritime) were beginning renovations on the famed space, which they acquired in 2016. According to Guernsey’s, Georgiou was selling records and living along 23rd Street, not far from his former home. He spotted the discarded doors, and, recognizing their sentimental worth, decided to preserve them. Georgiou enlisted a few friends and transported 52 doors to a storage facility in the Bronx.
A bit of history is in order. Hotel Chelsea opened in 1884 as a cooperative and quickly attracted the city’s creative set. From the beginning, the top floor was devoted to 15 artist studios. In the early 20th century, the building served as a luxury establishment. World War II brought a dive in quality and rates—and an increase in bohemian tenants. Mark Twain and O. Henry lived at the Chelsea, which also housed Thomas Wolfe as he wrote his 1940 masterpiece, You Can’t Go Home Again. Leonard Cohen immortalized his one-time home (and his romance with fellow resident Janis Joplin) in his song “Chelsea Hotel No. 2.” Smith recounted in her memoir Just Kids how her former Hotel Chelsea roommate,
Robert Mapplethorpe
, took his first photographs here. 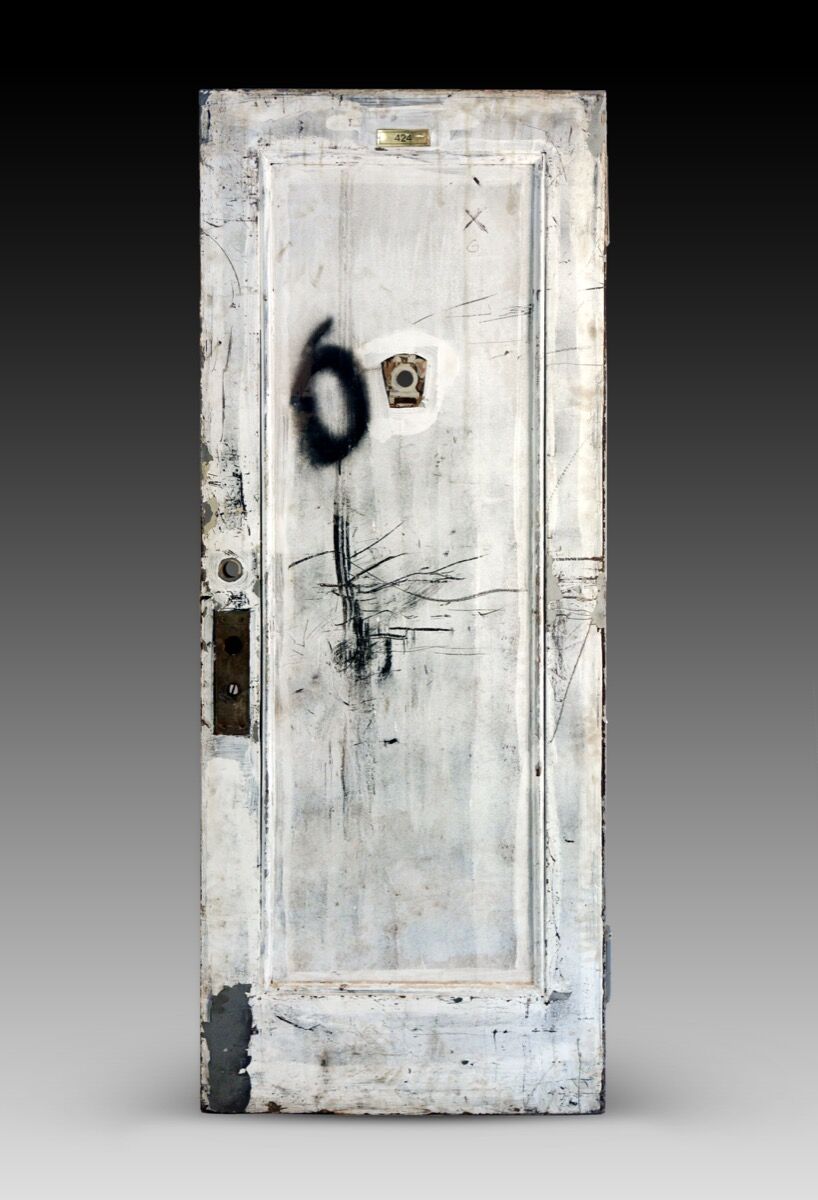 Janis Joplin’s door at the Chelsea Hotel. Courtesy of Guernsey’s. 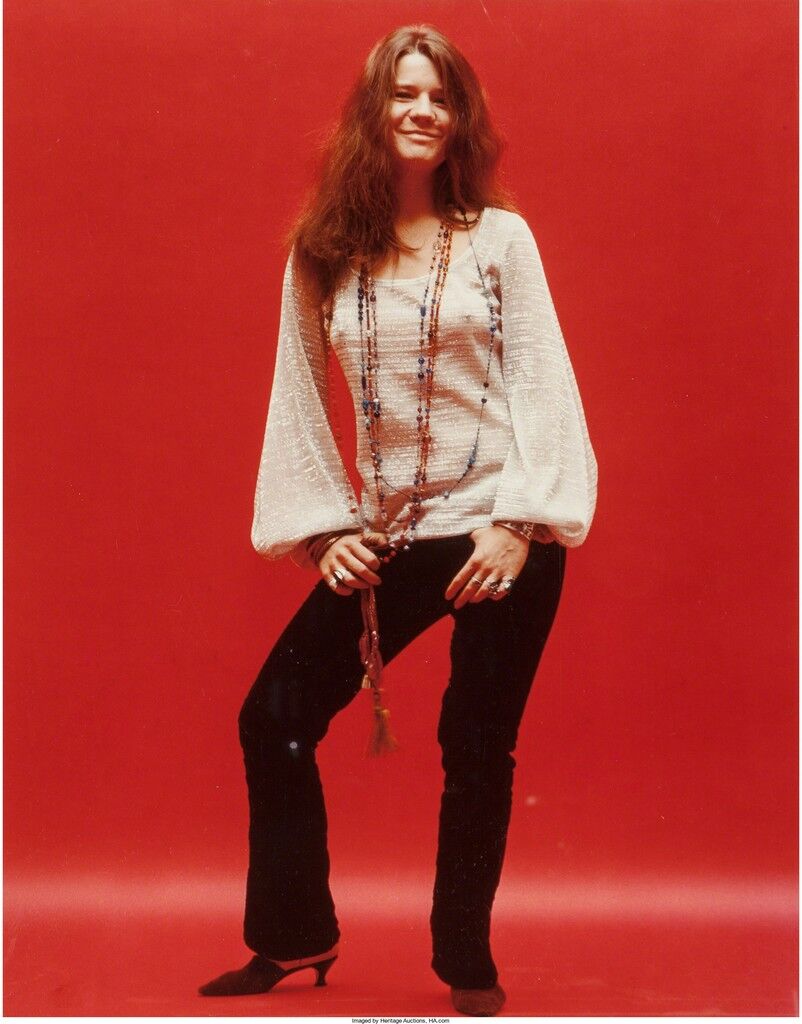 Jim Marshall
Janis Joplin, 1982
Heritage Auctions
If the hotel served as a major site of creation, it also inspired reckless, storied destruction. Warhol muse Edie Sedgwick once accidentally set her room on fire, and the poet Dylan Thomas nearly drank himself to death (he downed 18 whiskies in a nearby bar and fell into a coma). In 1978, Nancy Spungen, the girlfriend of Sex Pistols bassist Sid Vicious, was found stabbed to death on a bathroom floor. He was charged with her murder, but died of a drug overdose before the case went to trial.
Georgiou was well aware of these legends. He began a multi-year research project to determine which of his doors belonged to which resident. Combing through archival materials and speaking with library desk clerks, he began piecing together the details. Reading about Warhol, for example, Georgiou discovered the room number in which the artist had filmed the avant-garde, era-defining Chelsea Girls in 1966.
All the doors are battered, with white paint chipping from many of them. Some even feature spray-painted Xs, ostensibly to signal them for removal by the construction crew. The number 211 still marks the door behind which Bob Marley once stayed. An especially decrepit, plain door tagged 126 once opened onto quarters belonging to boldface tenants like Bette Davis and Iggy Pop. A spray-painted O and a series of scratches distinguish the door once opened by Cohen, Joplin, and Joni Mitchell. Madonna, Isabella Rossellini, and
Shirley Clarke
all stayed in 822. As Georgiou worked, what had initially looked like damage became meaningful evidence of celebrity wear and tear. 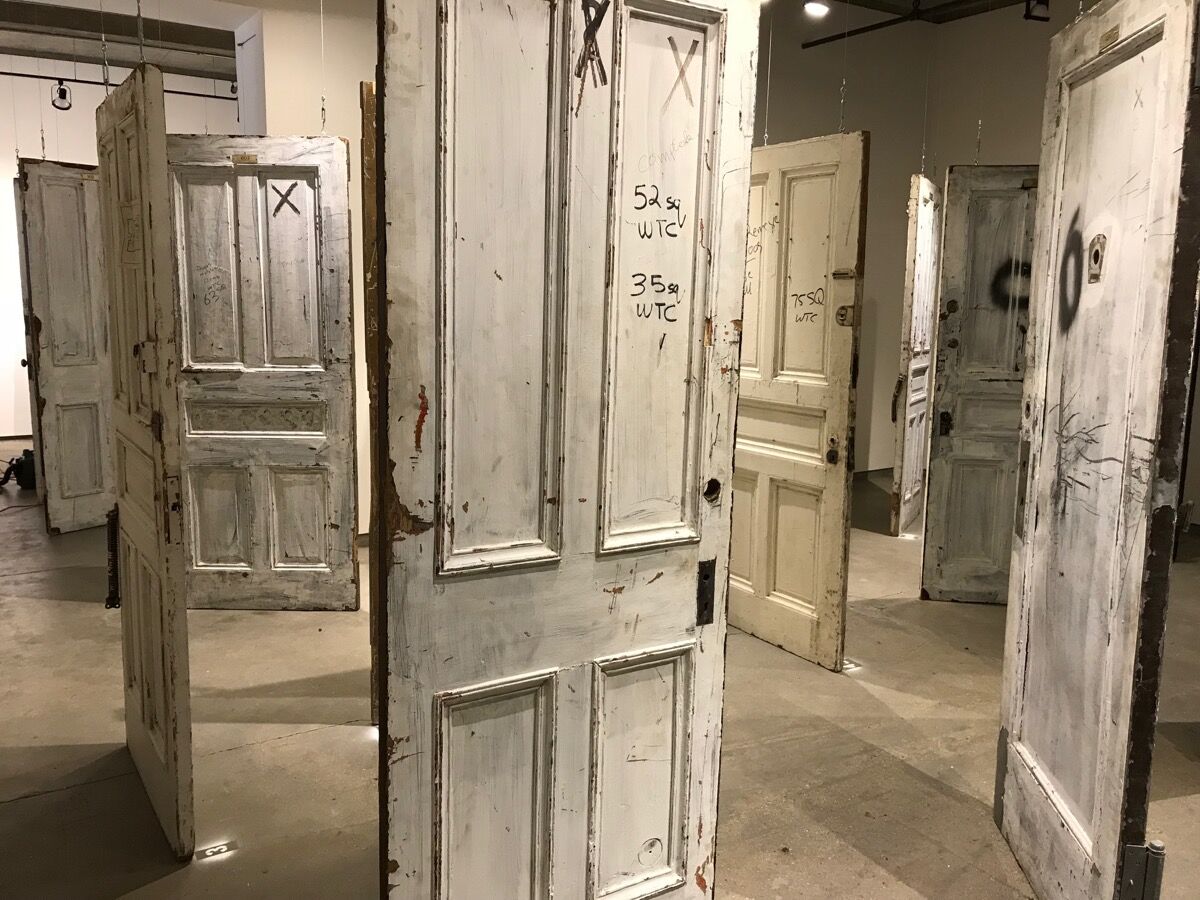 Installation view of the doors, on view at Ricco/Maresca. Courtesy of the gallery.

Advertisement
Finally, Georgiou called Arlan Ettinger, the founder of Guernsey’s, to discuss how to sell these relics. Ettinger was quickly onboard. “Perhaps more than any other building in recent American history, the Chelsea has been home to some of the most interesting, trendsetting people who worked there, played there, had orgies there, and—not to be proud of—but in one or two cases got murdered there,” he told Artsy.
“In doors, there’s both the forbidding and the inviting,” Daniel Kershaw, who designs exhibits at the Metropolitan Museum of Art, has previously noted. “I’ve always felt that the most wonderful transitions that doors provide are those which give you an element of surprise, that what’s on one side of the door is so vastly different than what’s on the other side of the door.”
Gallerist Frank Maresca, who is exhibiting the doors beginning April 5th at his Chelsea location and co-hosting the April 12th auction, developed a display strategy to enhance this sense of revelation. He’s suspended 22 of them from his concrete ceiling at Ricco/Maresca with cables and stainless steel. The setup will resemble what he describes as “a labyrinth, a maze, a funhouse.” 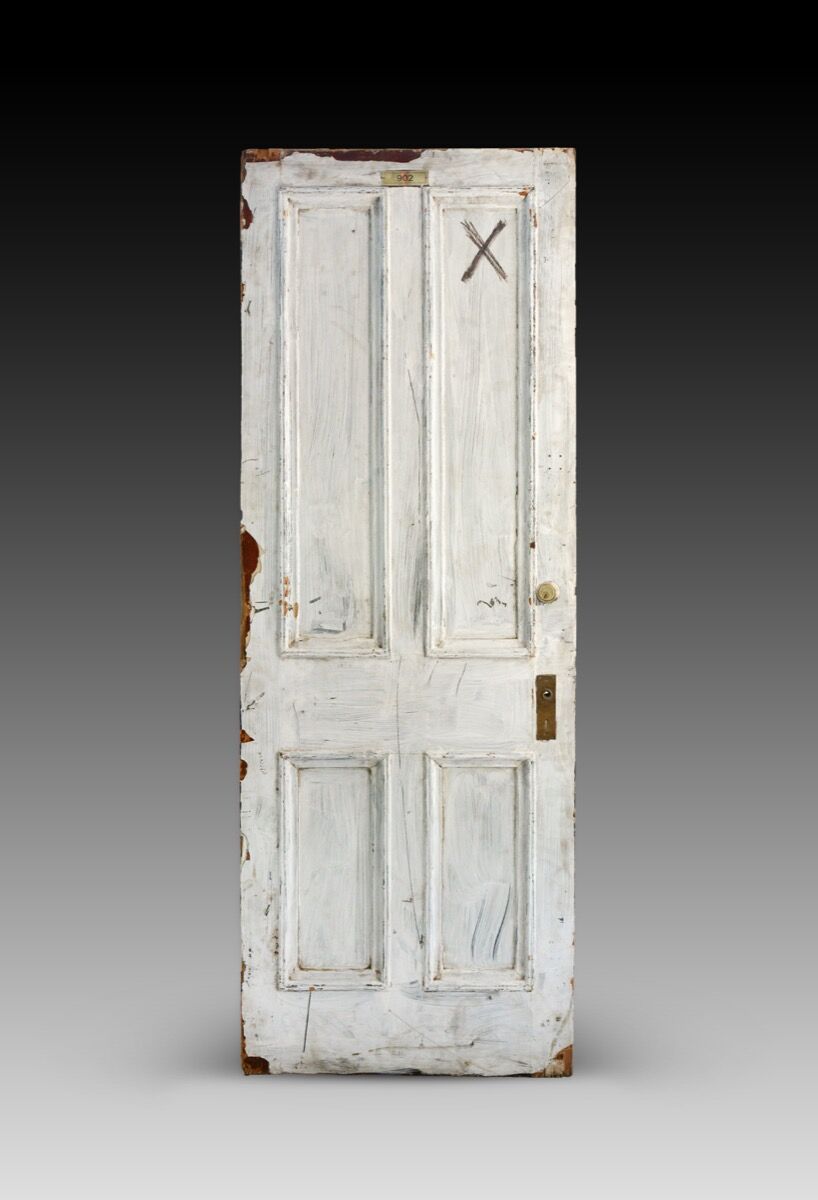 Jackson Pollock’s door at the Chelsea Hotel. Courtesy of Guernsey’s. 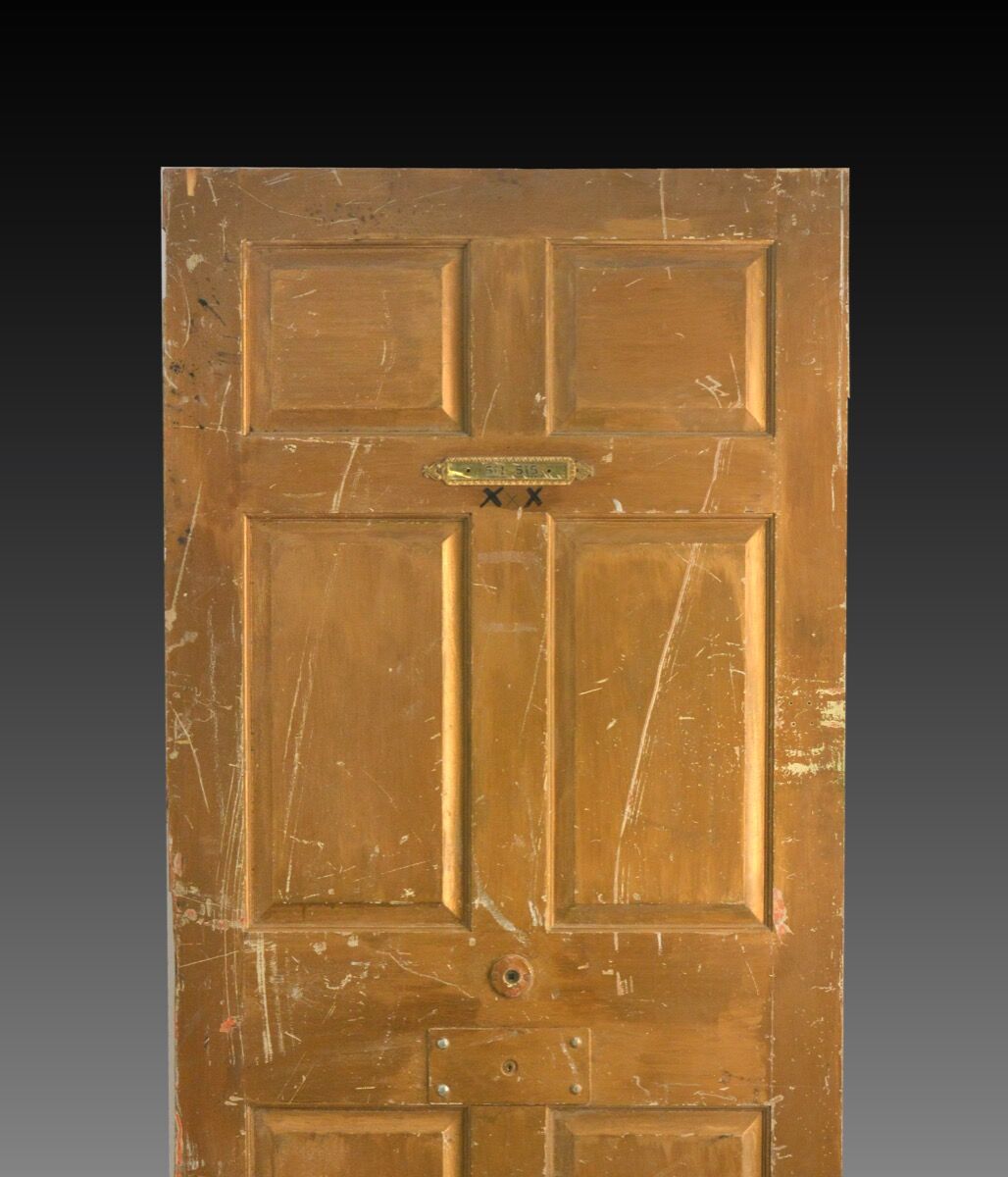 Tennessee Williams’s door at the Chelsea Hotel. Courtesy of Guernsey’s.

The hotel holds personal significance for the gallerist, as well. Maresca himself calls El Quijote (the ground floor eatery at Hotel Chelsea, which shuttered last week) “the very first restaurant that I ever ate in in my life.” In 1967, at age 17, Maresca began working for advertising photographer Irving Schild. With his boss, he sometimes socialized with the Hotel Chelsea set. “The doors radiate the essence of the Chelsea Hotel,” Maresca said. “I would call them plain and gritty.”
So—who wants them? “You can never predict who buyers might be,” said Ettinger. He says that gallery owners, noted photographers, and even the head of a bank have already expressed interest. Estimates are very broad, from a door affiliated with Pollock  ($5,000 to $100,000) to one bearing associations with both Brian Jones and Liam Neeson ($2,000 to $20,000). Proceeds will benefit the charity City Harvest and Georgiou himself. In the future purchasers’ homes, the doors may serve as reminders of a bygone era, inspiration for creative practitioners, or anthropological curiosities.
New Yorkers, after all, are uniquely primed to revere these battered totems and yearn for such a grungy, authentic past. Dylan, who started to write his 1966 record Blonde on Blonde while staying in the Chelsea, perfectly captured the tension between presence and absence, desire and detachment, and dirt and romance that characterize the city. In one of his best-loved songs from the album, “Visions of Johanna,” he sings, “And the all-night girls, they whisper of escapades out on the D train…The harmonicas play the skeleton keys and the rain / And these visions of Johanna are now all that remain.”
Alina Cohen
Related Stories

Why Andy Warhol Would Have Loved RuPaul’s Drag Race

The Artsy Podcast, No. 62: The Myth of Jackson Pollock and the Masterpiece Created in One Night 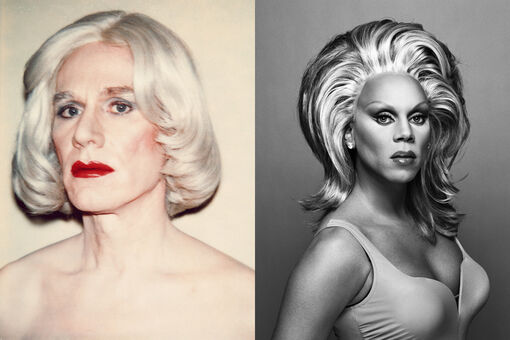 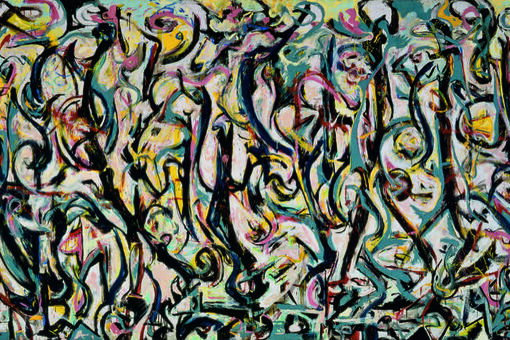 The Artsy Podcast, No. 62: The Myth of Jackson Pollock and the Masterpiece Created in One Night
Artsy Editors
Dec 27, 2017