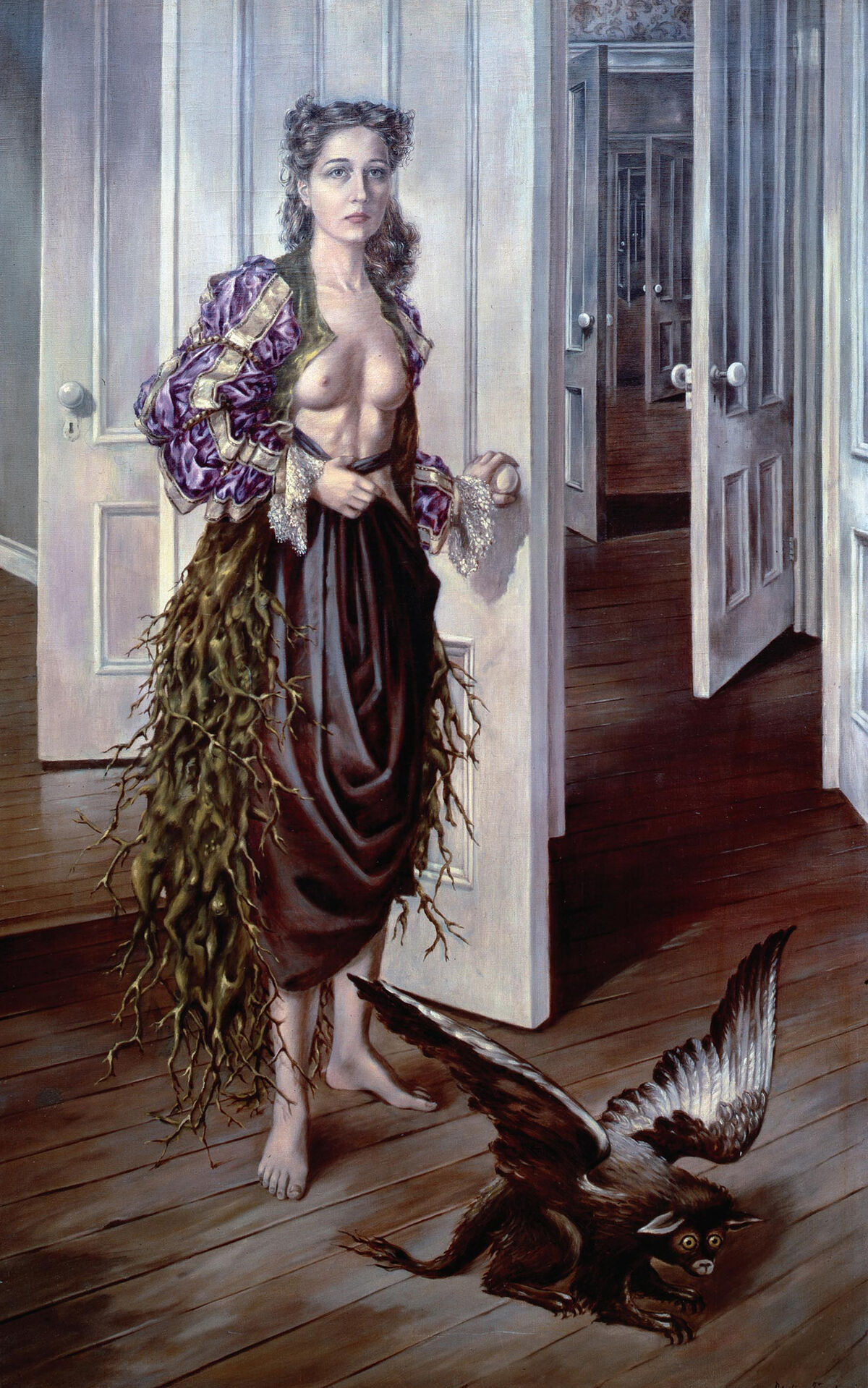 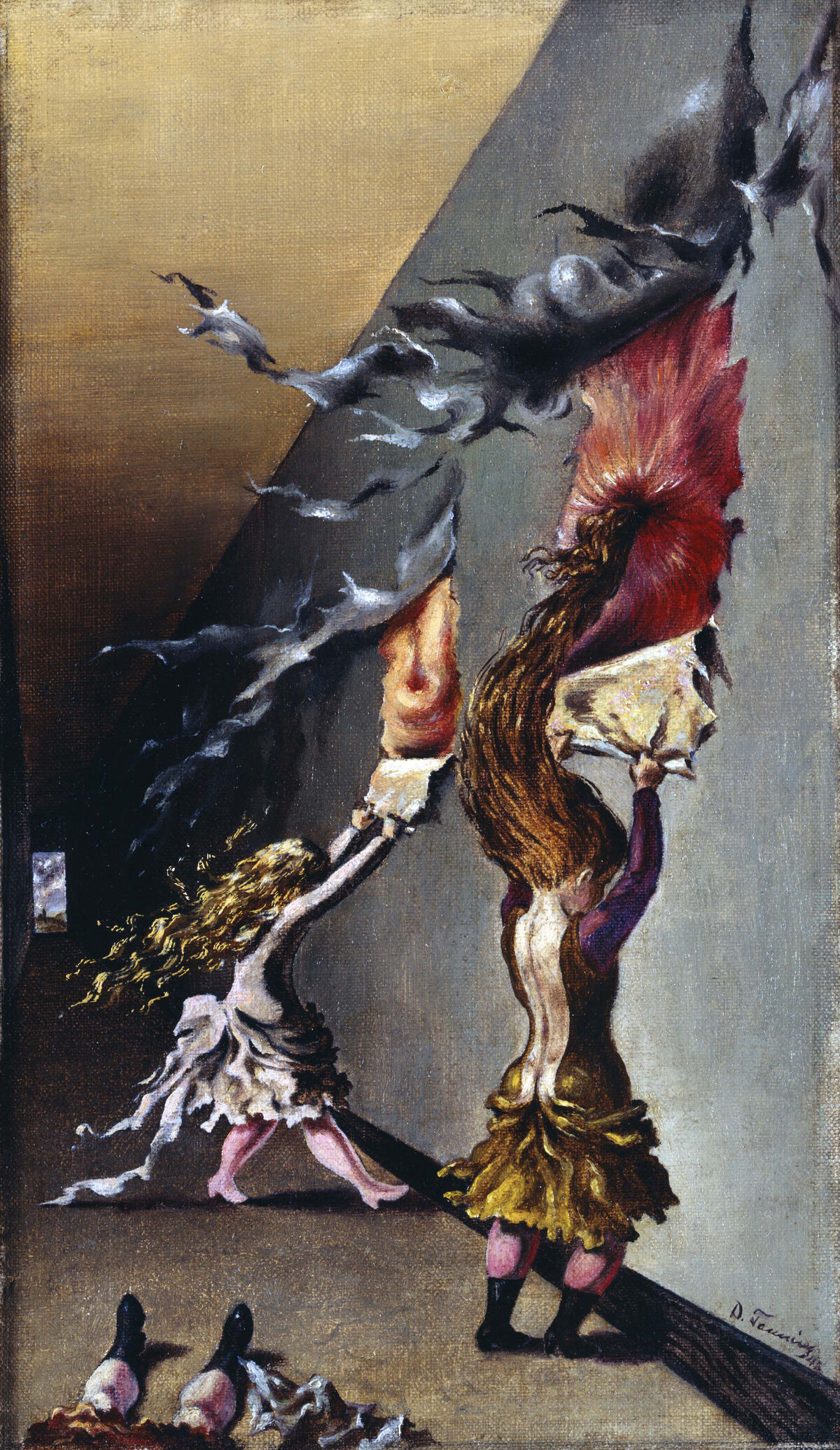 In
Dorothea Tanning
’s mesmerizing self-portrait Birthday (1942), the artist portrays herself in a fantastical, bare-breasted costume anchored by a long, 17th-century-style jacket that features cascading Lilliputian figures whose limbs morph into branches as they drape around her body. Her hand rests on the knob of a door that opens to reveal a never-ending series of other doors. Although her gaze calmly meets that of the viewer, her expression remains resolutely unreadable. For Tanning, who would later describe her process as creating a kind of web of dreams and ideas from which there was no escape, enigma was “a very healthy thing, because it encourages the viewer to look beyond the obvious and commonplace.”
The painting was famously still on its easel when
Max Ernst
visited Tanning’s studio. Ernst was advising his wife, Peggy Guggenheim, on whom might be included in a major exhibition of female artists she was planning. Birthday, whose title was suggested by Ernst to signify Tanning’s rebirth from the real to the surreal, and Children’s Games (1942), whose mischievous femmes-enfants would become a recurring motif, were included in Guggenheim’s landmark “Exhibition by 31 Women.” The gallerist later quipped that she should have only had 30 women in the show; within months of its opening, Tanning and Ernst began an extramarital affair. They remained together until the latter’s death in 1976. Ernst’s career has long overshadowed Tanning’s, but a major retrospective at Tate Modern in London seeks to rectify that disparity, revealing Tanning to be a stunningly innovative and eclectic creator. In a career spanning seven decades, she embraced not only the
Surrealist
painting for which she is best known, but also poetry, a series of groundbreaking soft sculptures, and costume and set design for the ballet. Although she bristled at the term “woman artist,” there is little doubt that Tanning challenged conventional ideas about sexuality and domesticity within a movement that has frequently been seen by critics as promoting a passive role for women.
Tanning first encountered the Surrealists at the 1936 exhibition “Fantastic Art, Dada, Surrealism” at the Museum of Modern Art in New York. Here, she “not only witnessed Surrealism, but specifically a lot of women artists,” said Alyce Mahon, co-curator of the Tate exhibition. Items on display included
Meret Oppenheim
’s 1936 Object(also called Breakfast in Fur), which, as Mahon said, is “a very erotic domestic object.” This and other works revealed to Tanning the “limitless expanse of POSSIBILITY,” she later wrote, while the artworks were “signposts so imperious, so laden, so seductive, and, yes, so perverse.” 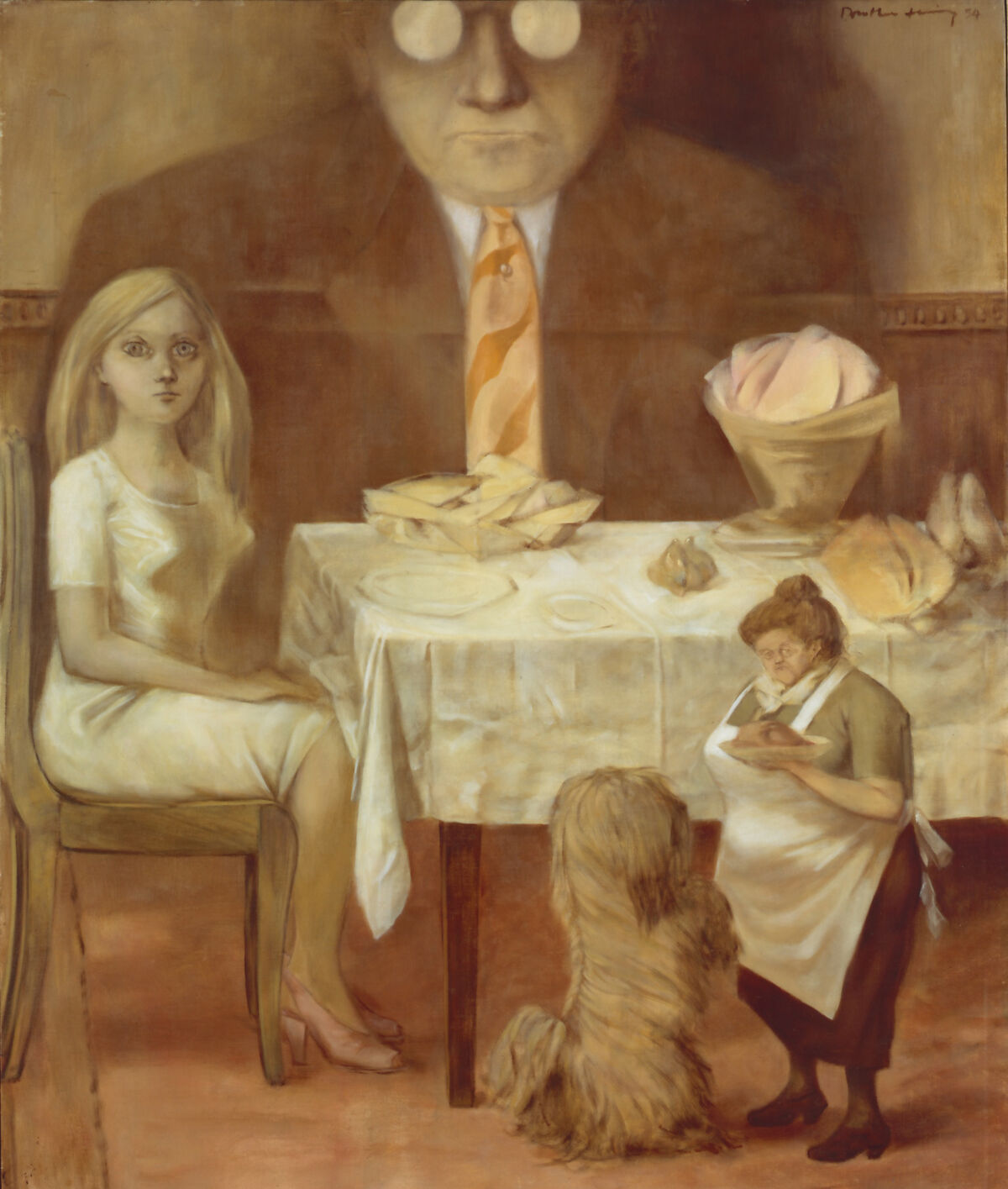 Advertisement
Although Mahon believes that criticism of the male Surrealists has been overstated, pointing out that both male and female Surrealists showed “the female body as beautiful objects to be desired,” Tanning certainly “marshaled Surrealism and the sexual element in her own way,” she said. Her self-portrait is a case in point. “As a woman artist, she chose to represent herself semi-naked, staring out and confronting the spectator,” Mahon explained. Tanning was “mastering her own image…embracing how it might play with sexuality.”
Tanning also took the Surrealist obsession with the femme-enfant—a kind of child-woman whose sense of wonder encouraged probing deeper into the unconscious self—and used it to portray uninhibited young girls yet to be constrained by society’s restrictions and moral codes. In the 1943 painting Eine Kleine Nachtmusik (“A Little Night Music”), we see a pair of them confined to an eerie corridor. One girl, her hair upraised as if possessed by a demonic spirit, stares down a large sunflower, a plant Tanning considered the “most aggressive of flowers.”
A more poignant take on the motif can be found in The Guest Room (1950–52), a portrayal of a naked girl, clearly somewhat self-conscious and contemplative, positioned in a doorway. The scene suggests a gateway between adolescence and adulthood, and implicitly questions why society teaches teenage girls to “increasingly be more and more fearful of their own bodies,” Mahon said. Elsewhere, Tanning wreaks havoc on conventional notions of domesticity. Objects swoop and swirl around her depictions of interiors. In Family Portrait (1954), however, a grotesquely oversized father figure looms over a dining table—a critique of traditional family values.
Endgame (1944) also reveals her frustration with conventional bourgeois morality. Tanning co-opts the Surrealists’ favorite game of chess to portray herself as the queen in the form of a satin shoe literally crushing the bishop. At the bottom of the canvas is a trompe l’oeil scene of Arizona; she and Ernst spent their summers there, unable to respectably cohabit in cosmopolitan art centers until Ernst’s divorce was finalized.
In the 1940s and ’50s, Tanning began designing costumes and sets for Balanchine. These projects saw her vivid imagination come fluidly to life, and may well have had an impact on her painting from that era onwards. She developed a looser style with kaleidoscopic color effects she termed “prismatic.” Verging on the abstract, in these paintings figures merge into one another, while certain body parts appear to morph into the canvas itself. Dorothea Tanning, The Girl, Costume Design for The Witch, a ballet by John Cranko, 1950. © DACS, 2018. Courtesy of Tate Modern.

However, in the 1960s, Tanning grew weary of turpentine and canvas, and turned to fabric and thread to further explore female sexuality. Her experiments grew in size and ambition, culminating in the astonishing installation Hôtel du Pavot, Chambre 202 (1970–73), which she referred to as “the surrealist work par excellence—and probably the last?”
Cloth figures leap out of—or are perhaps sucked into—a dreary hotel room. Inside the room, there are further installations—an armchair and a female form merge into an embrace, while another figure reclines over a table in what may be pleasure or pain. Tanning said the individual parts of the work are “stand-ins for our human dilemma…[having] traded their eroticism for despair.” 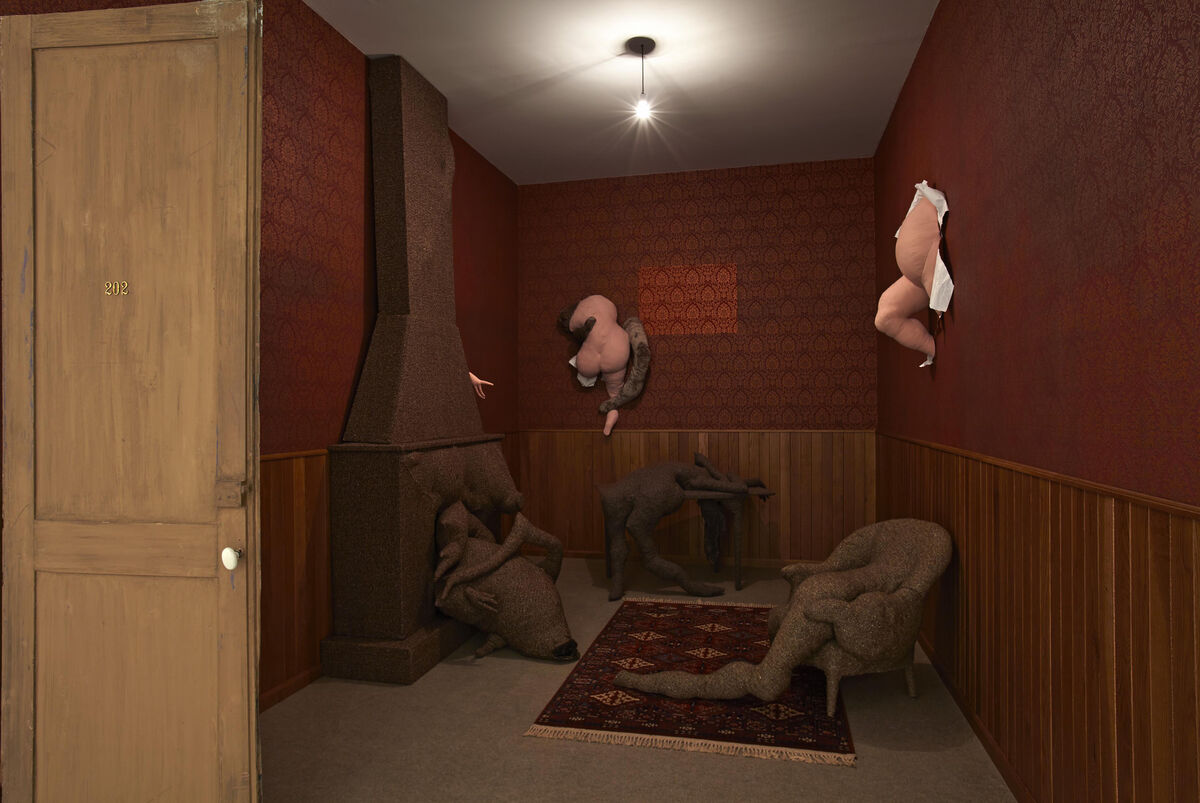 The influence of Chambre 202 can be seen in
Francesca Woodman
’s “House” and “Space²” series (1975–76), photographs in which the artist’s nude body merges with the shredded wallpaper behind her. Mahon believes Tanning also “paved the way for later, more explicitly feminist artists turning to craft and soft sculpture,” such as
Tracey Emin
and
Sarah Lucas
. The latter’s series “Nud Cycladic”(2010) is particularly reminiscent of Tanning’s work. 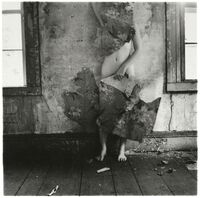 3 Images
View Slideshow
Tanning eventually returned to painting and created astonishing work well into her eighties. In one of the last paintings in the Tate show, On Avalon (1987), monumental nude figures dance and sway, reveling in their physicality as they wave huge flower blossoms like pom-poms above their heads. Tanning’s commitment to a narrative of feminine power and resistance throughout her career makes her work powerfully relevant in these troubling early decades of the 21st century.
Cath Pound
Related Stories

How the Women of Surrealism Went from Muses to Masters

The Market for Female Surrealists Has Finally Reached a Tipping Point 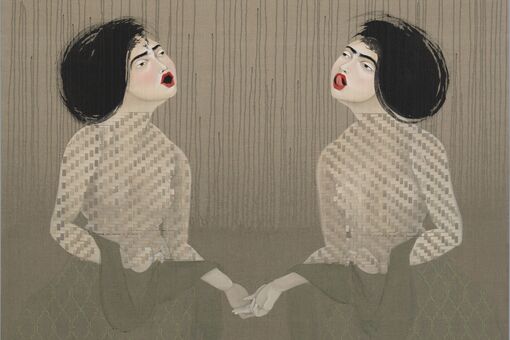 How the Women of Surrealism Went from Muses to Masters
Izabella Scott
Jul 4, 2017 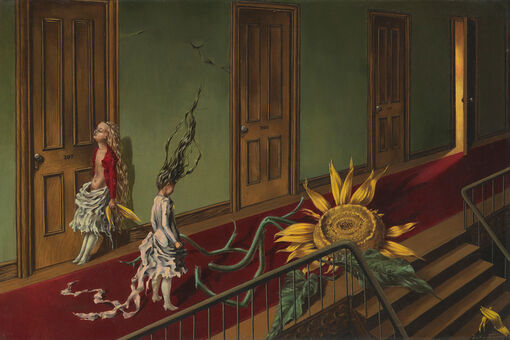 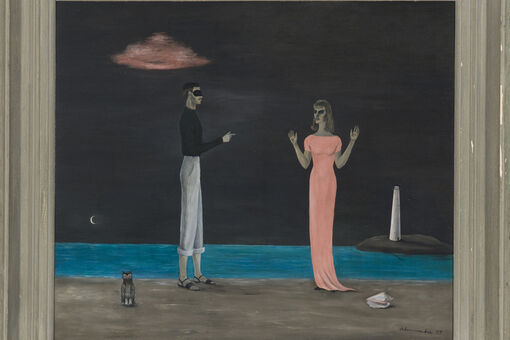 8 Female Surrealists Who Are Not Frida Kahlo—from Meret Oppenheim to Dorothea Tanning
Alexis Corral
May 31, 2016