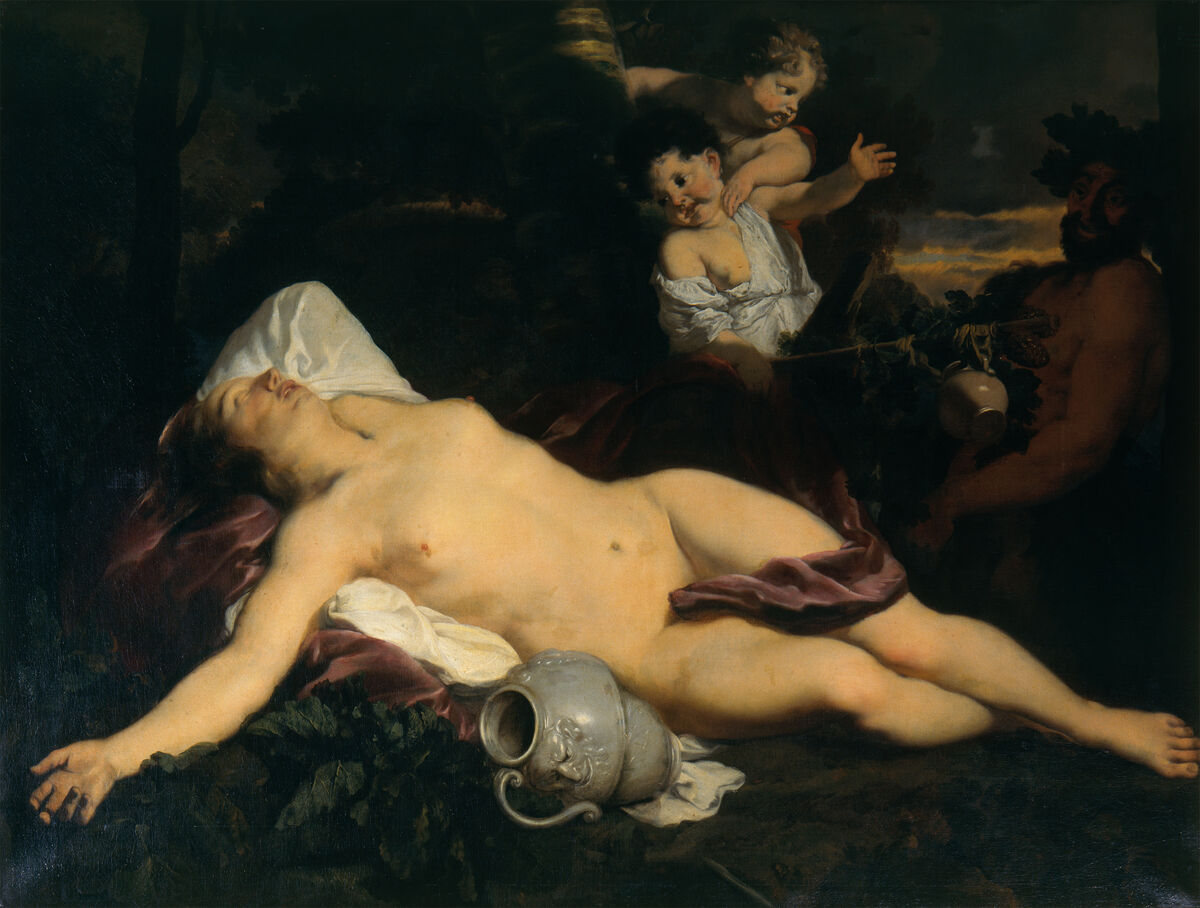 A museum looking to commission a new work isn’t likely to hire a housepainter, and a homeowner needing a paint job probably wouldn’t go looking for a fine artist. But in the Dutch Golden Age, many of the most successful portraitists and landscape painters were organized in the same professional guilds as housepainters. The reasoning was simple: Members of both professions worked with a paintbrush.
Today, the artist as a visionary with ideas and aesthetics of her own is taken for granted. But it emerged during this vibrant period in the Netherlands, pioneered by
Rembrandt van Rijn
, alongside many of other features of the modern art market.
“Rembrandt was an exception—he was very convinced of his quality as an artist,” said Dr. Franz Wilhelm Kaiser, the artistic director of Hamburg’s Bucerius Kunst Forum and curator of its latest show, “The Birth of the Art Market: Rembrandt, Ruisdael, van Goyen and the Artists of the Dutch Golden Age.”
The exhibition highlights this and other turning points in the art market that characterized a key period in European history that saw the emergence of a broad middle class who became art consumers; the professionalization of the art dealer; and the growing importance of taste and connoisseurship as a marker of class. 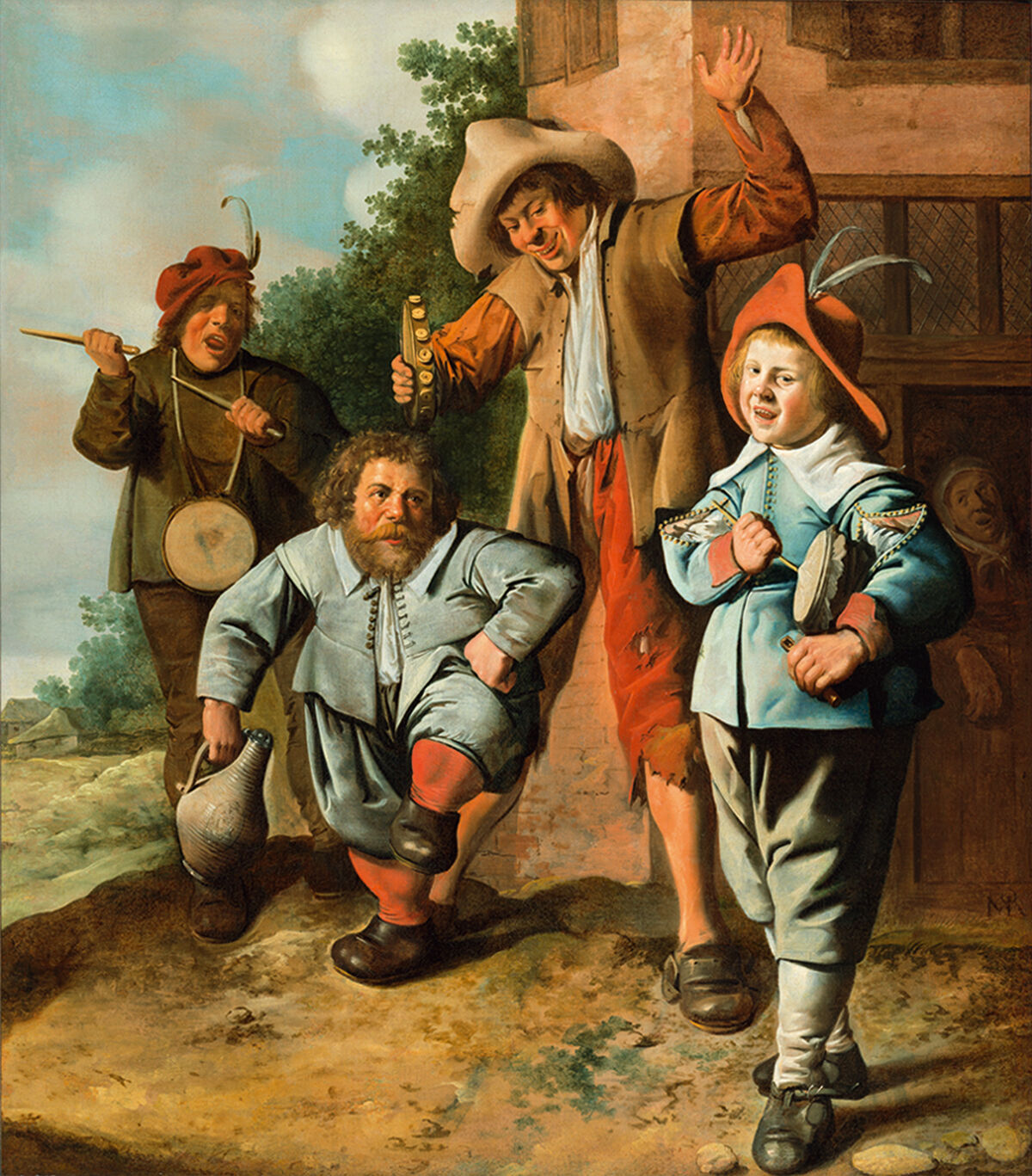 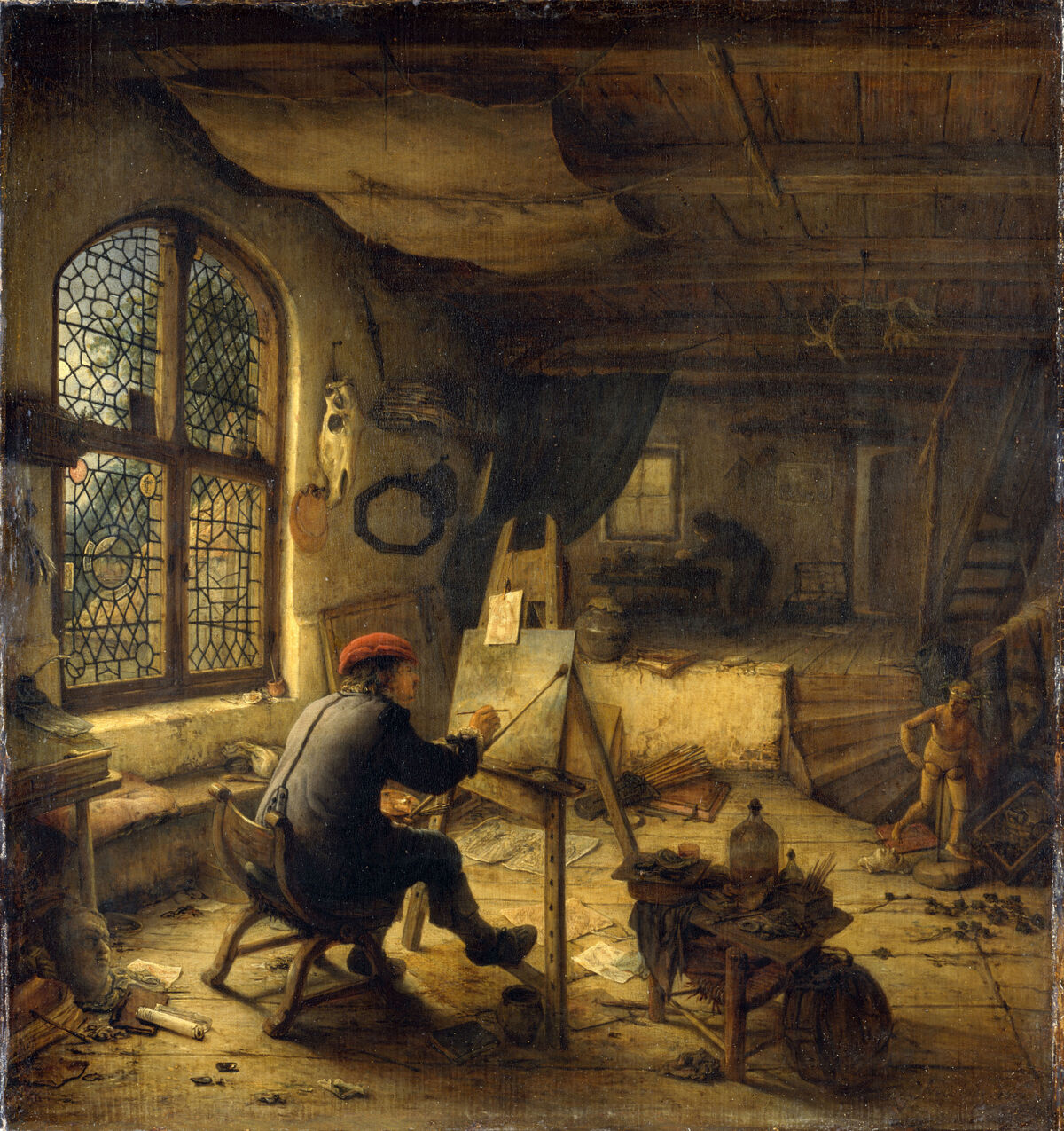 In the Dutch Golden Age, the Netherlands’ naval and mercantile power reach new heights. That economic flourishing spread across society with financial innovations such as the publicly held company, which allowed broad swaths of society to participate in the profits thrown off by emerging multinational corporations such as the Dutch East India Company. At the same time, the church receded from public life, as did the prominence of the nobility, in favor of an emerging class of merchant bourgeoisie. For artists, though, that meant an erosion of the special status they acquired through their association with royalty, and a return to the notion of artists as mere  artisans, who joined guilds alongside housepainters.
“The high status of the artist, which emerged in Renaissance times, emerged because they were working for princes,” said Kaiser. “But the Netherlands had no princes, so in that sense Dutch artists had to take a step back.”
These Dutch craftsmen—not yet seen as possessing the visionary, individual talent that we now think of as characterizing “the artist”—produced paintings in large quantities for the growing middle class, who for the first time could afford oil paintings (as opposed to prints). These painters split into two camps, taking either the high road or the low road to market. Low-road painters competed on price (finding techniques, such as specialization in a given subject matter, like landscape or marine painting, that allowed them to complete works as speedily as possible), while high-road painters catered to the bourgeoisie. 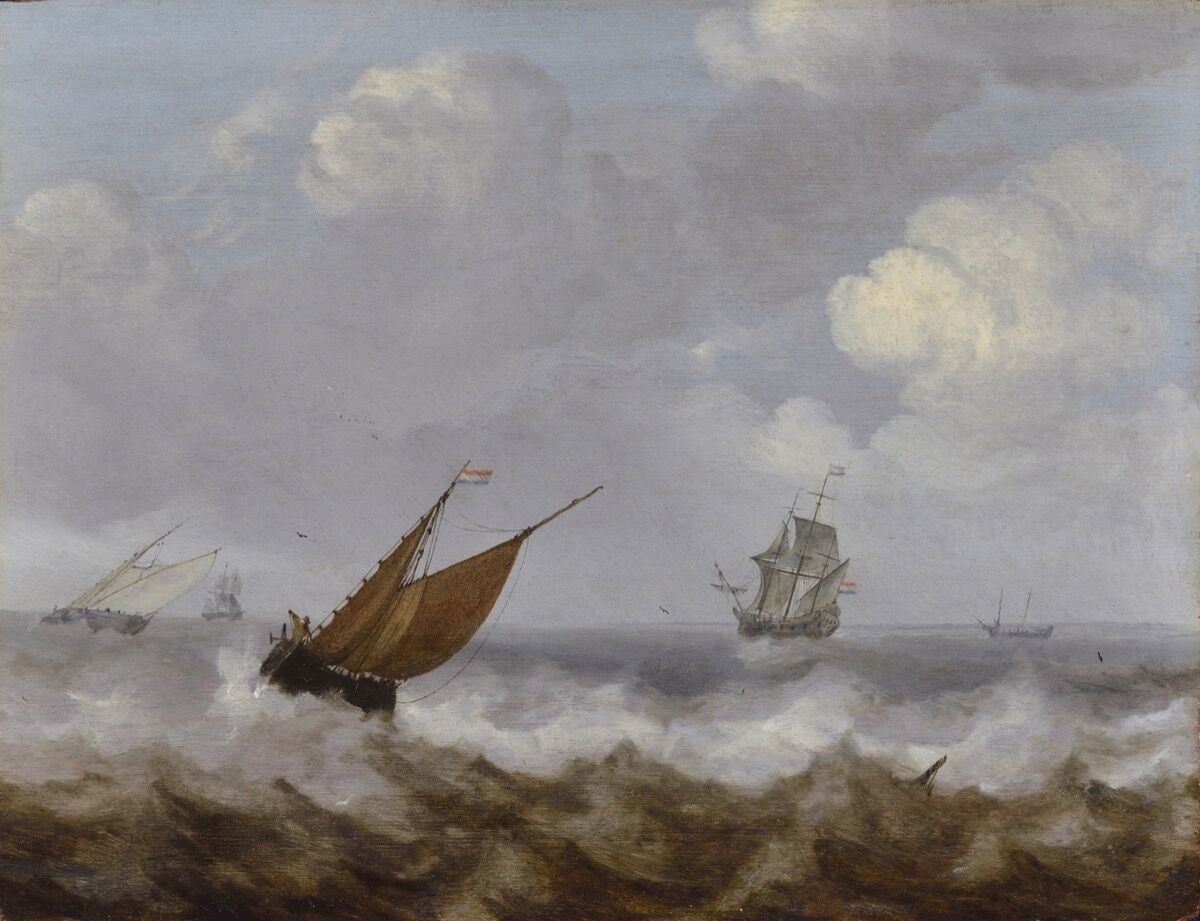 Advertisement
The show opens on the ground floor with examples of the former: artists catering to a broad market, who include
Jan Miense Molenaer
and
Adriaen van Ostade
. They depicted familiar, everyday scenes, to which an uneducated middle class could relate. According to the audio guide accompanying the show, the niche specializations of the painters sometimes reached the level of the absurd: “Landscapes with cows are typical of
Paulus Potter
, whereby depictions of horses were usually done by
Philips Wouwerman
.
Jacob van Ruisdael
specialized in paintings of waterfalls, which in reality do not exist in the Netherlands.”
Visitors ascend to the second floor, where they see examples of more upmarket, large-scale history paintings, which depicted biblical, historical, or mythological scenes (targeted at a wealthy, educated clientele) and exquisitely worked “fine paintings.” Fine paintings featured smooth brushwork and great attention to detail and took months to complete. Techniques developed by Rembrandt’s student
Gerrit Dou
allowed for the depiction of costly materials such as silk or the sheen of armor. But whether cheap or fine, prices for the paintings reflected the time and labor put in, rather than the value of an artist’s vision or talent.
Rembrandt wanted to change all that. Such was his self-confidence that he argued for a standard (and rather high) price, in the thousands of guilders for a painting. To put that in perspective, upscale history paintings were sold for 150 guilders, and a small house in a peripheral city such as Delft could be had for around a thousand, Kaiser said.
“[Rembrandt] was always trying to push his prices up,” said Kaiser. “His famous seven preserved letters to his sponsor Constantijn Huygens are very revelatory in that sense: He wanted to be paid like the Italians or the Flemish painters, in the thousands, that is, and he rejected any evaluation of a price to be paid for any of his paintings according to the working time he had put into its making—a craftsman’s criterion so to speak. This is one of the earliest instances of an artistic evaluation, based on idealistic values.”
Rembrandt also had a vision for how to better penetrate the market, teaming up with first wife’s uncle, Hendrick van Uylenburgh, a painter and art dealer who helped him gain access to the bourgeoisie. Van Uylenburgh needed a talented artist to paint portraits of these wealthy elite; Rembrandt in turn invested a thousand guilders in his dealership and ran his workshop. According to Kaiser, around half of Rembrandt’s portraits were created in the four years the two worked as a team, before the artist struck out on his own. 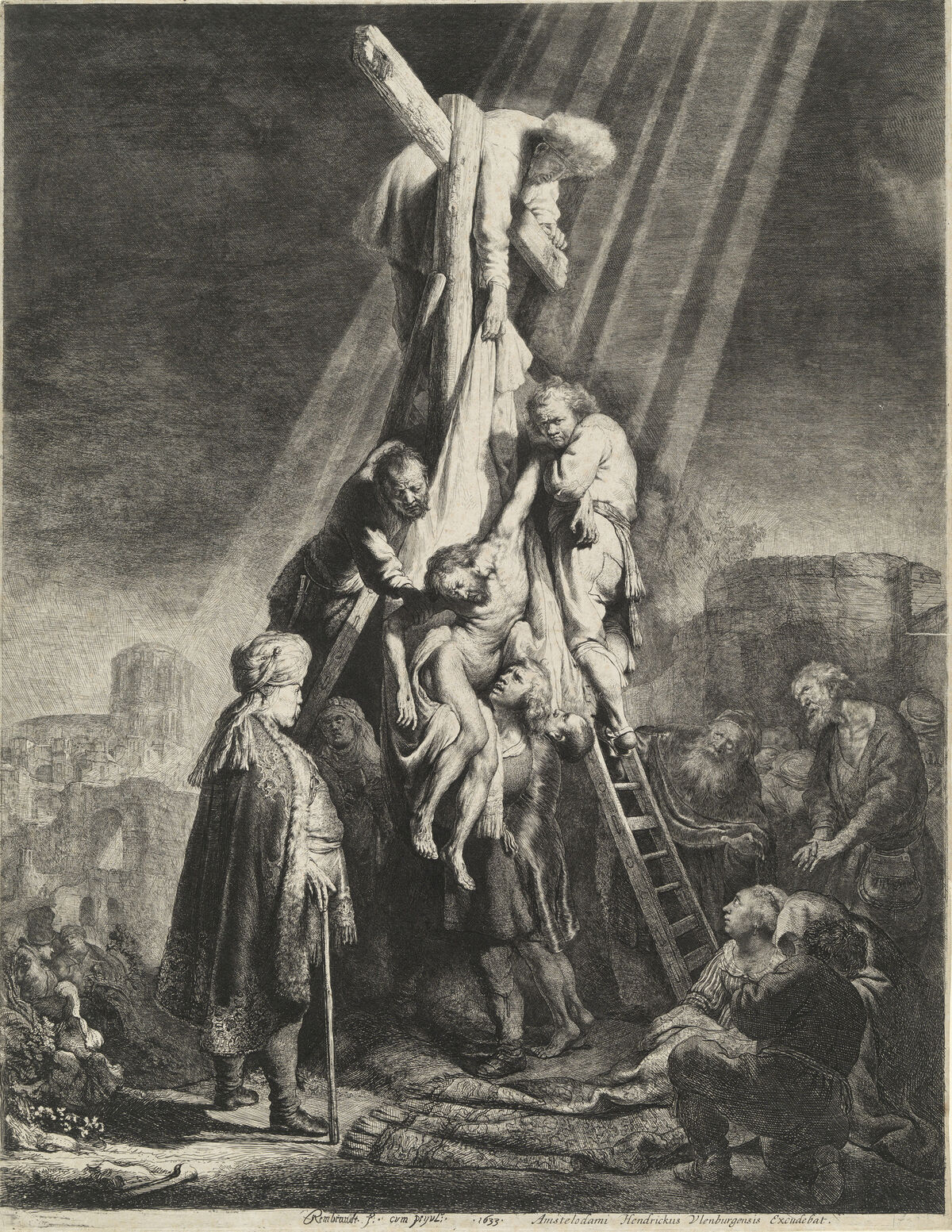 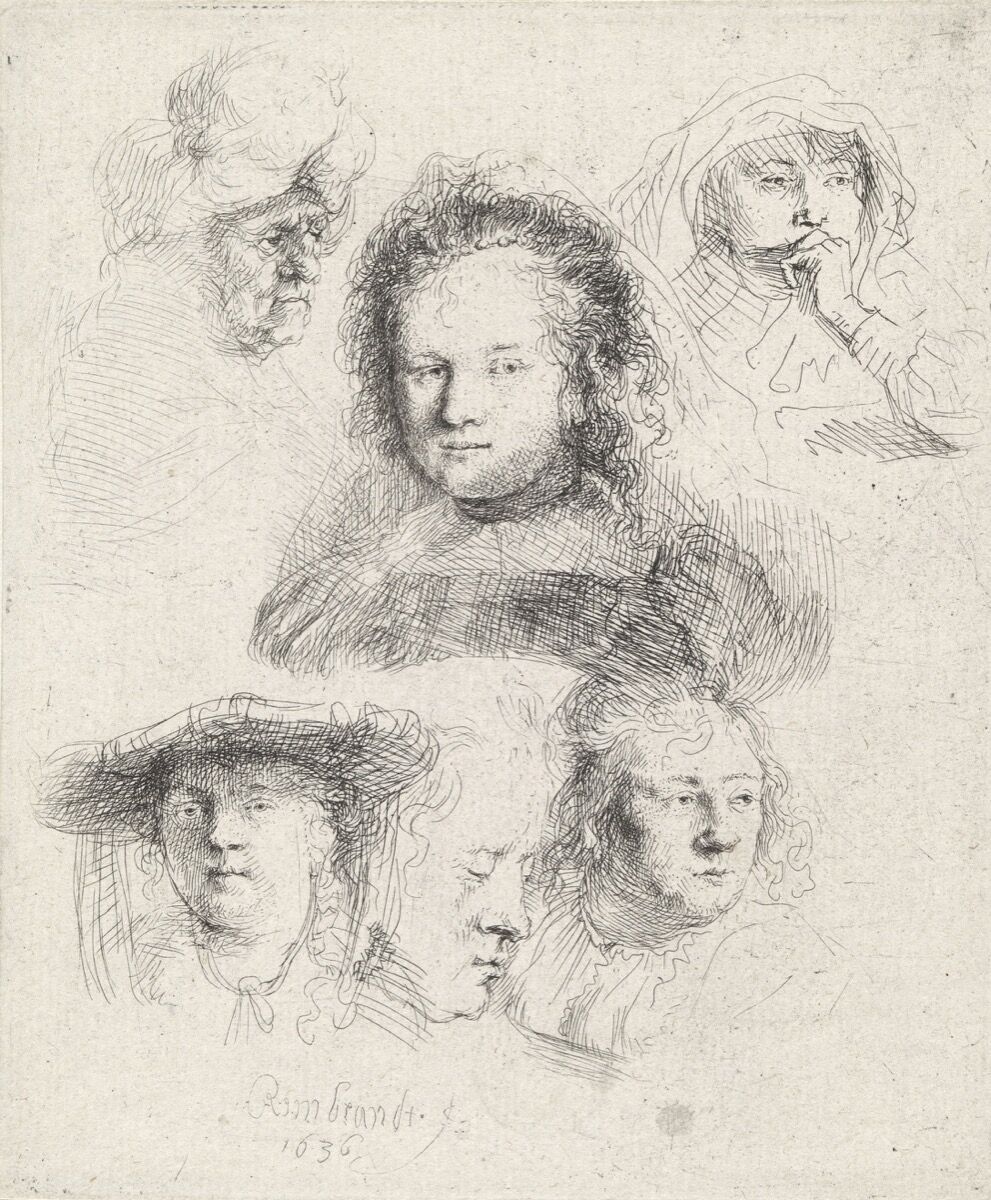 This was also the era in which full-time art dealers emerged. Previously, most dealers were painters who traded in their own works and those of their colleagues, focusing more on the dealing if their paintings were less successful. Van Uylenburgh saw an opportunity to pursue more secondary market dealing beginning in the 1640s, when serious collections which held works by
Titian
and
Raphael
became available in the international market. Men such as Johannes de Renialme, a stock market investor who also sold Italian artists, was one of Amsterdam’s top art dealers by the mid-17th century.
Around this period, Dutch tastes also began to change. After the Peace of Westphalia in 1648, which saw the northern provinces triumph over Spain, the Dutch began to look outwards towards a more international
Baroque
style. Dutch rulers looked to courts abroad and sought something similar, moving away from realism and towards something more idealized.
“With a new kind of social system, new people get into power, and they change the symbols of power and the iconography from those of former powers,” Kaiser said, noting how such an aesthetic shift is typical of regime change. “Whereas before it was a local style for the local market, now you had a return to the idealistic Baroque, so they zoomed in on that and tried to be up to date.”
Hendrick van Uylenburgh’s son Gerrit, who had taken over his father’s dealership and workshop, recruited the Liègois painter
Gerard de Lairesse
to produce paintings in this Baroque mode. The younger van Uylenburgh used his contacts in Parisian and English courts to promote de Lairesse’s and others’ works internationally. Rembrandt, who continued to develop his own style, fell out of fashion, to the point where a massive, 5.5-by-5.5-meter commission he delivered for Amsterdam’s city hall was rejected, because he refused to paint in the Baroque style.
“The taste had changed,” said Kaiser. “The commissioners, the public—they wanted to have a kind of Flemish, idealized Baroque painting.” Instead, “Rembrandt did his thing…[and] that is the emergence of the independent artist, the visionary.”
The fraught painting hung in the city hall for eight weeks, after which the commissioners likely asked him to modify it, which Rembrandt refused to do. It was too large for his studio, so he cut it into pieces, retaining a 2-by-3-meter fragment which is now in Stockholm’s Nationalmuseum. That may have been the end of his career, but it was the beginning of a new age, in which the artist is a visionary to whom society must adapt, rather than a craftsperson in service of a client.
Anna Louie Sussman
Related Stories