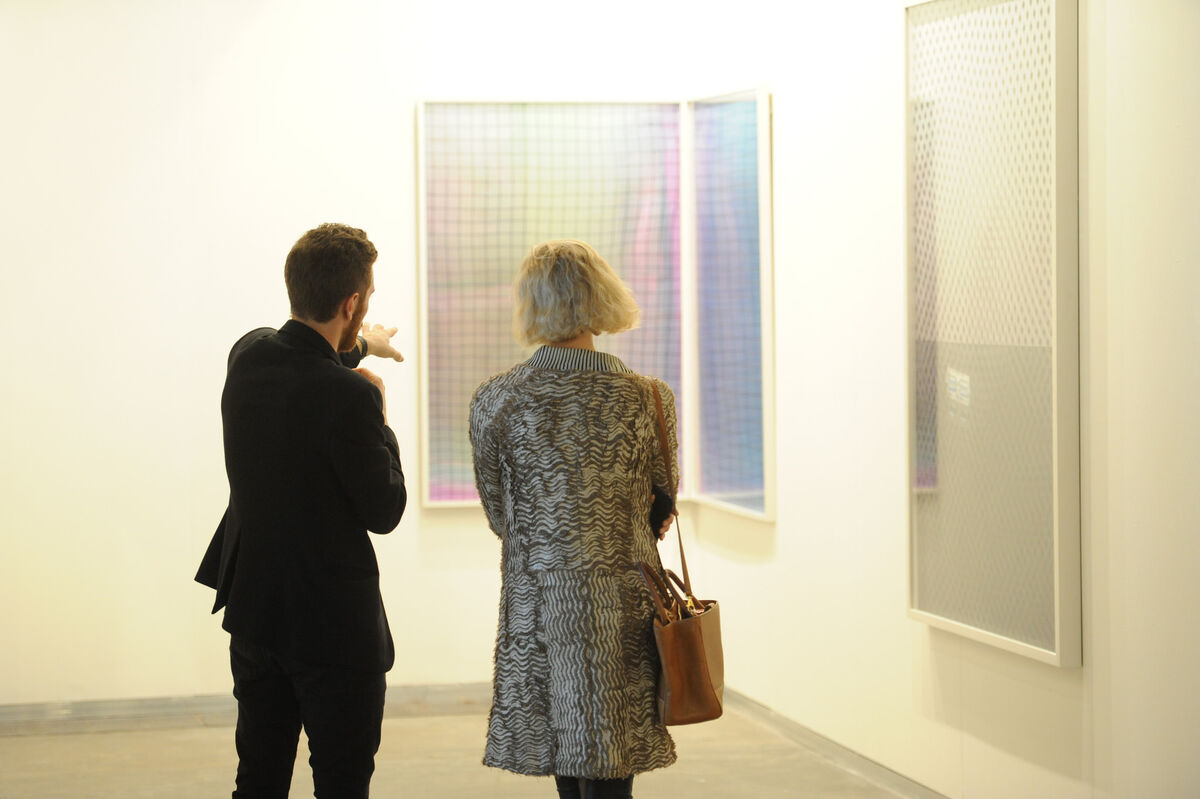 “Glamour won’t let go of art’s hands.” That’s how one journalist summed up the atmosphere in the opening hours of arteBA, the art fair that shakes Buenos Aires to its core every year. There were collectors and even “splendid socialites and models” to boot. There’s also a new attitude in town, and it goes beyond the grounds of La Rural, the convention center that for the last 24 years has housed the most traditional art gig in Argentina. Hope, believe it or not, seems to beckon from the Casa Rosada all the way downtown. The presidential elections coming up in August and the changes on the horizon acted as some kind of mood enhancer for collectors as they walked the fair grounds.
While Brazil, this country’s gigantic neighbor to the north, plummets farther down in economic mayhem, Argentina has high expectations for the future, despite coming off years of sustained crisis. “We really do hope that in the next years Argentina will enter a cycle similar to what happened in Brazil in the last decades,” said Alec Oxenford, president of the arteBA Foundation and founder of technology giant OLX, in one of the lounges at the fair. “Things should stabilize, but I don’t care about the recession, or if the dollar rises or drops. A part of all the money I make I invest back in art. The fair has never been better.” 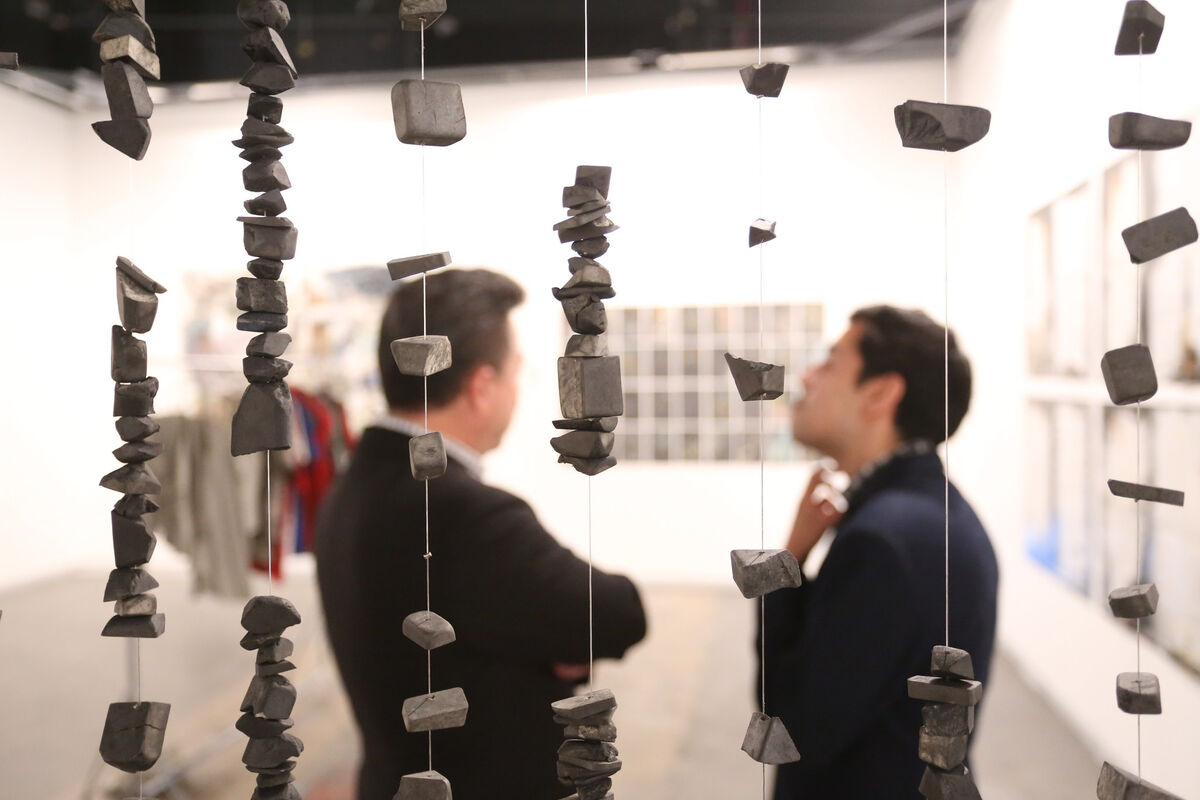 Indeed, it’s never been edgier. Part of restructuring arteBA so it can make it to the “top ten” art fairs in the world, a goal Oxenford is bent on achieving, has to do with removing clutter, reducing the number of works hanging on the walls, streamlining design all around, and taking some risks. This means making room for performance—the VIP preview had a fair share of artist antics—as well as for more politically charged works.
“This is a work for below or behind the couch,” said Henning Weidemann, from Berlin’s Campagne Première gallery, as he pointed to a picture of a naked corpse plastered on a wall. “It’s nice to be able to bring something like this to the fair. I’m sure you’re not used to seeing things like this here.”
He was referring to a massive installation by Marco Poloni. The dead man on the wall is Roberto Quintanilla, the Bolivian consul in Hamburg who was shot and killed in his office—the three bullet wounds forming a “V” as in victory—in 1971, still in the wake of Che Guevara’s execution in the jungles of Bolivia. The work, part of the fair’s U-TURN section curated by Jacopo Crivelli Visconti, is an obsessive investigation of this murder, with details on the gun (it was bought by the Italian publishing magnate Giangiacomo Feltrinelli), the woman who killed Quintanilla (Monika Ertl, daughter of Leni Riefenstahl’s director of photography) and all that ensued, in what Poloni identifies as an underground tangle of revolutionary endeavors. 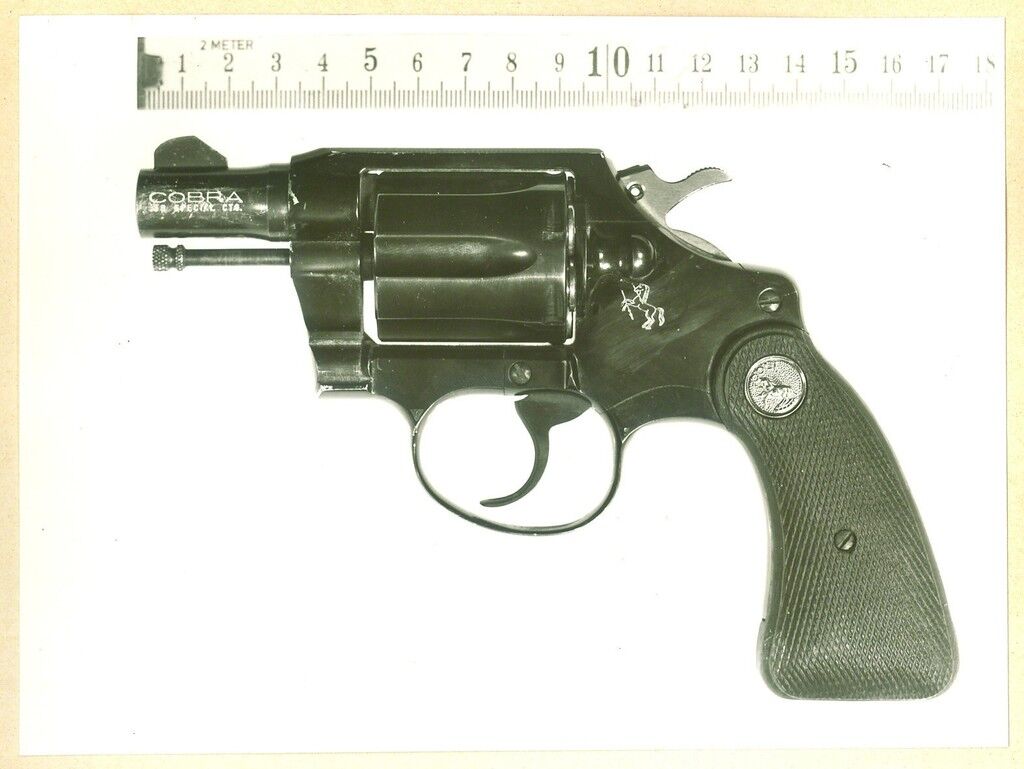 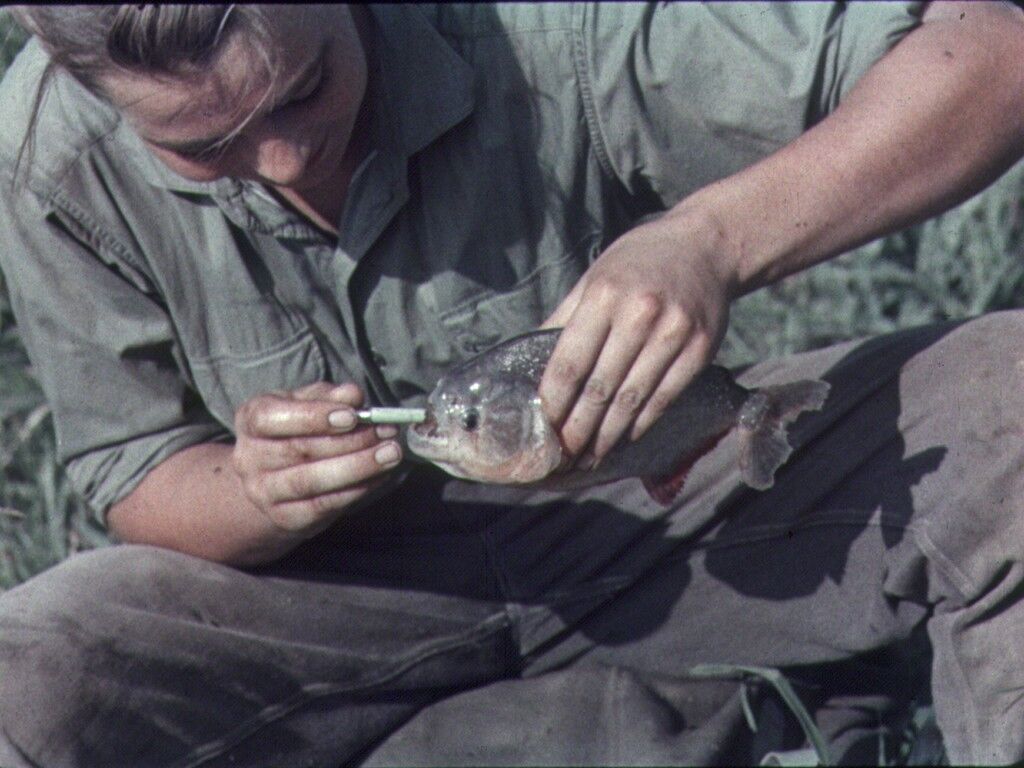 Marco Poloni
The Pistol of Monika Ertl (detail), 2013-2014
Campagne Première
Advertisement
This sets the tone for most of the pieces in the fair—though, other works are less explicit and tend to sweep the proverbial dust under the rug, disguising it with pristine, sleek surfaces. This is the case with Santiago Reyes Villaveces, an up-and-coming Colombian artist, whose works from Bogotá’s Instituto de Visión are subtle equivalents to throwing a wrench in the gears of a sputtering political machine. In an allusion to a generalized lack of parameters and standards, he scrapes off the measurement markings on two rulers hanging side by side and, in another diptych, draws a meteorite cut in half by order of some politician in the backwaters of Colombia. 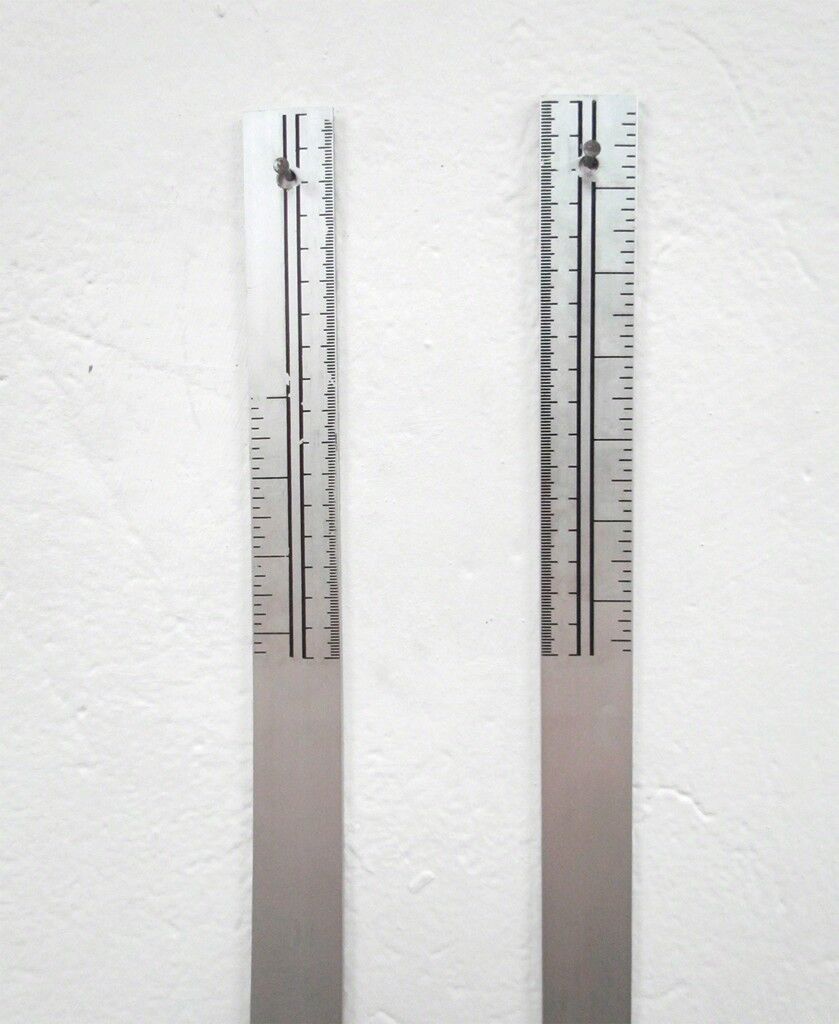 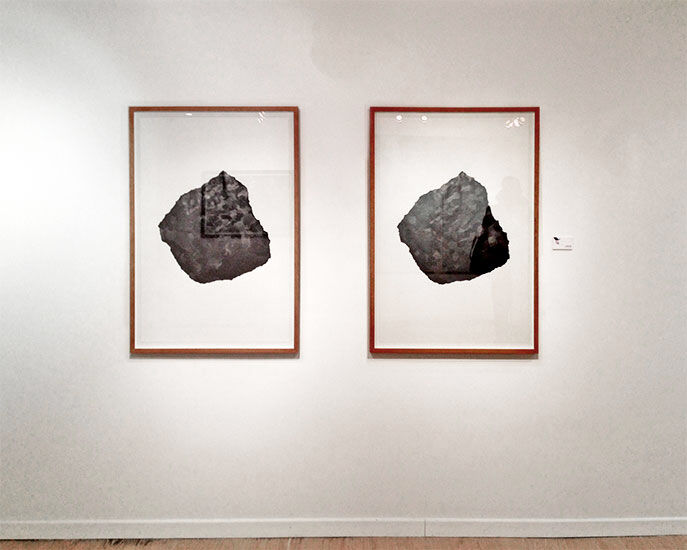 Santiago Reyes Villaveces
Instituto de Visión
Echoing Reyes Villaveces’s iconoclastic approach, Argentinian artist Pablo Accinelli shows a map of Buenos Aires with its streets and contours scratched off with sandpaper, resulting in a white, empty surface. His slabs of concrete with levels on top, also at Buenos Aires’s Ignacio Liprandi Arte Contemporáneo, show how uneven the floor sits under our feet, even though everything looks just right. It’s a similar logic to Oscar Bony’s paintings of clouds in azure skies at Galerie Laura Haber, another Buenos Aires gallery. Known for his classic performance piece, La Familia Obrera (1968), in which he placed a working class family on a pedestal in a museum, Bony’s innocent-looking pictures refer to how the military regime plunged this country into oblivion at the time, when the only recourse was to daydream, heads high up in the air.
Politics aside, there was another buoyant trend at arteBA. Galleries less inclined to make a statement and more interested in profits decided to show some staples of the Latin American scene, meaning kinetic abstractions historic and new. While Buenos Aires’s RO Galeria de arte paired queen of Argentine Pop art Marta Minujín’s fluorescent abstractions with Rogelio Polesello’s acrylic sculptures, some of them just as gaudy in color palette, Aldo de Sousa, another local dealer, had a selection of artists with a kinetic approach.
“There are two trends going on right now. One of them is to look for the big names. Collectors want the special and rare pieces,” says de Sousa. “The other is a slight return to buying kinetic art.” Sticking to the trends, his stand showed sculptures by Enio Iommi, a local avant-garde hero and founder of the Arte Concreto-Invención movement, next to new kinetic works by artists like Paula Rivas and Dolores Casares—both from Argentina—and Chilean artist Benjamín Ossa. Without identification tags, these pieces could easily pass for 1960s experiments Julio Le Parc spearheaded with his Groupe de Recherche d’Art Visuel in Paris. 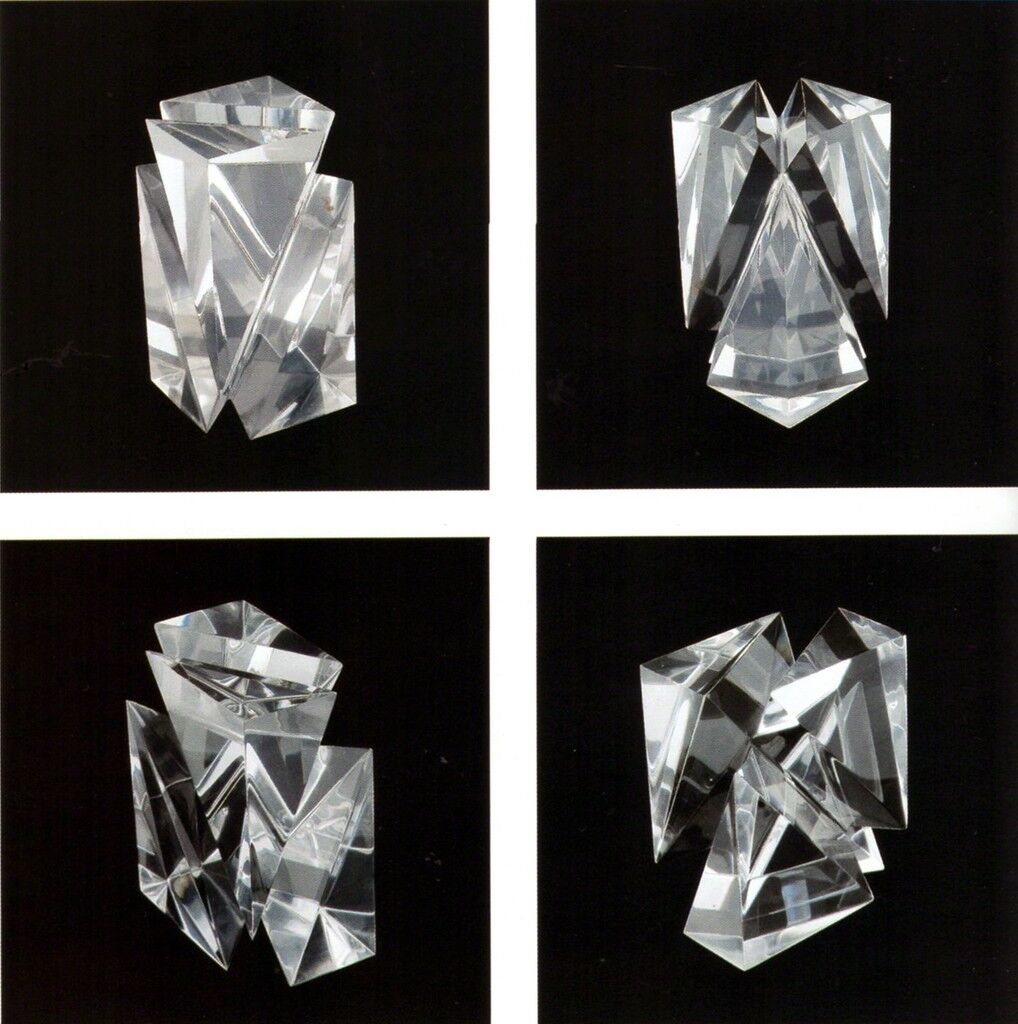 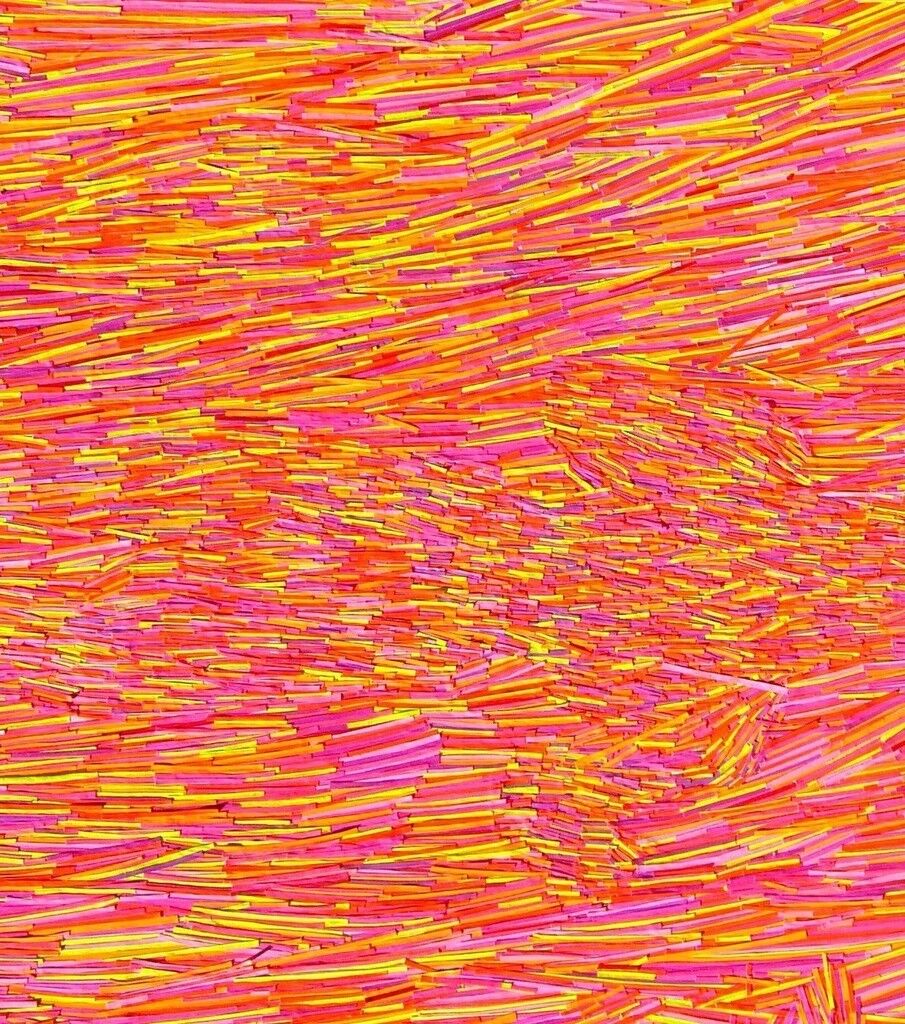