Thessaly La Force
Jul 16, 2016 8:42am
Over the last couple of decades,
Ed Ruscha
’s work has come to symbolize Los Angeles and the West, but lately, it seems, Ruscha the artist has too. At 78, he is still very much a handsome man, with placid blue eyes and rugged features. He speaks deliberately and slowly, with a slight drawl—he says “Los Angeles” instead of “L.A.,” and “Cali-for-knee-ah,” not “Califor-nyah.” It’s a way of speaking that is reminiscent of the late ’50s and early ’60s, when cowboys first roamed through Marlboro ads and Marilyn Monroe dressed down in Levi’s rolled at the cuff. To those who admire him now, Ruscha is a little bit like a Kennedy, a type of man that we lost in the 21st century—old-fashioned but masculine, well-mannered but tough. He possesses a laid-back cool that has helped to define—along with others such as the late
Chris Burden
and
John Baldessari
—what we understand as the Los Angeles artist. 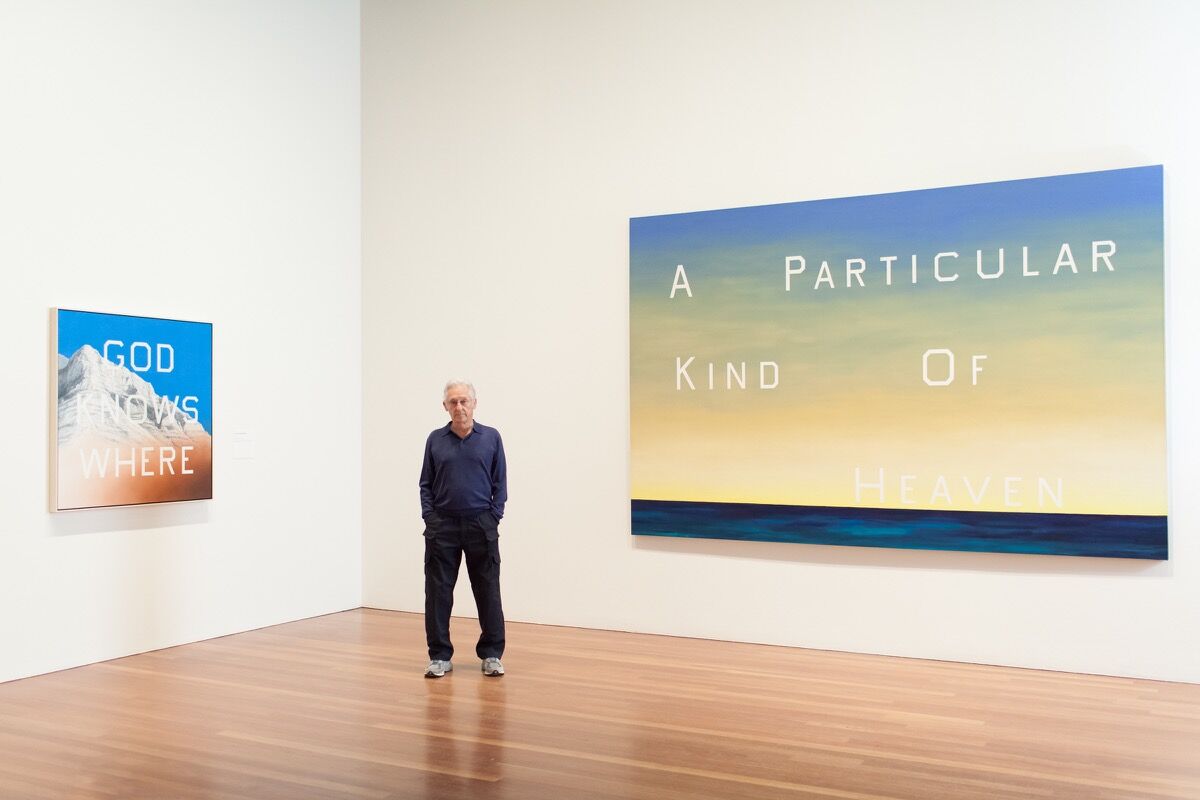 Portrait of Ed Ruscha at his exhibition “Ed Ruscha and the Great American West” at the de Young Museum, San Francisco, by Margo Moritz for Artsy.

Advertisement
Opening this month at the de Young Museum in San Francisco, “Ed Ruscha and the Great American West” emphasizes Ruscha’s deep commitment to place, and acknowledges the pioneer he was for heading west, not east, when he first set out to be an artist. “I felt California had something to offer me,” said Ruscha earlier this week over Skype, explaining his decision at the age of 18, in 1956, to attend the Chouinard Art Institute (now known as California Institute of the Arts or
CalArts
). “New York was the center of the art world,” Ruscha conceded. “People dreamed about New York. When I visited, it was every bit of what I thought it would be like. But I didn’t have the urge to move there. It seemed to be too cold and complicated and expensive. It would have been difficult to get across town with a piece of lumber.” Instead, the palm trees and sunsets and sprawl were more alluring. “California,” he said, “was like a new swanky place for me to go.”
Ruscha is perhaps best known for his word paintings—single words or short phrases that appear to float in the middle of the canvas. They reflect the marriage of his early training in commercial graphic design (“I had painted signs like show-car lettering and hamburger signs, that sort of thing,” he said of his teenage years spent in Oklahoma City) and the typesetting he studied while in art school with a much more abstract way of thinking. Handling letters on a larger scale allowed Ruscha to transform words into objects, as in Oily (1967), where the word looks as if it’s written in liquid. Its spacing, dark brown lettering, and ombre background are reminiscent of slick highways and smoggy sunsets.
Ruscha is very good at finding just the right words and detaching them from their context. Like fragments of Sappho poems, they only seem to take on a more potent meaning on their own. His word paintings can be strange, aloof, and dramatic—and also funny. They are deeply American, a nod to wholesome comics and black-and-white television shows like Leave It to Beaver. Honey...I Twisted Through More Damn Traffic to Get Here (1984) feels at once domestic, suburban, and frustrated. You can practically see the man, who might look a little bit like Ed Ruscha, saying it. 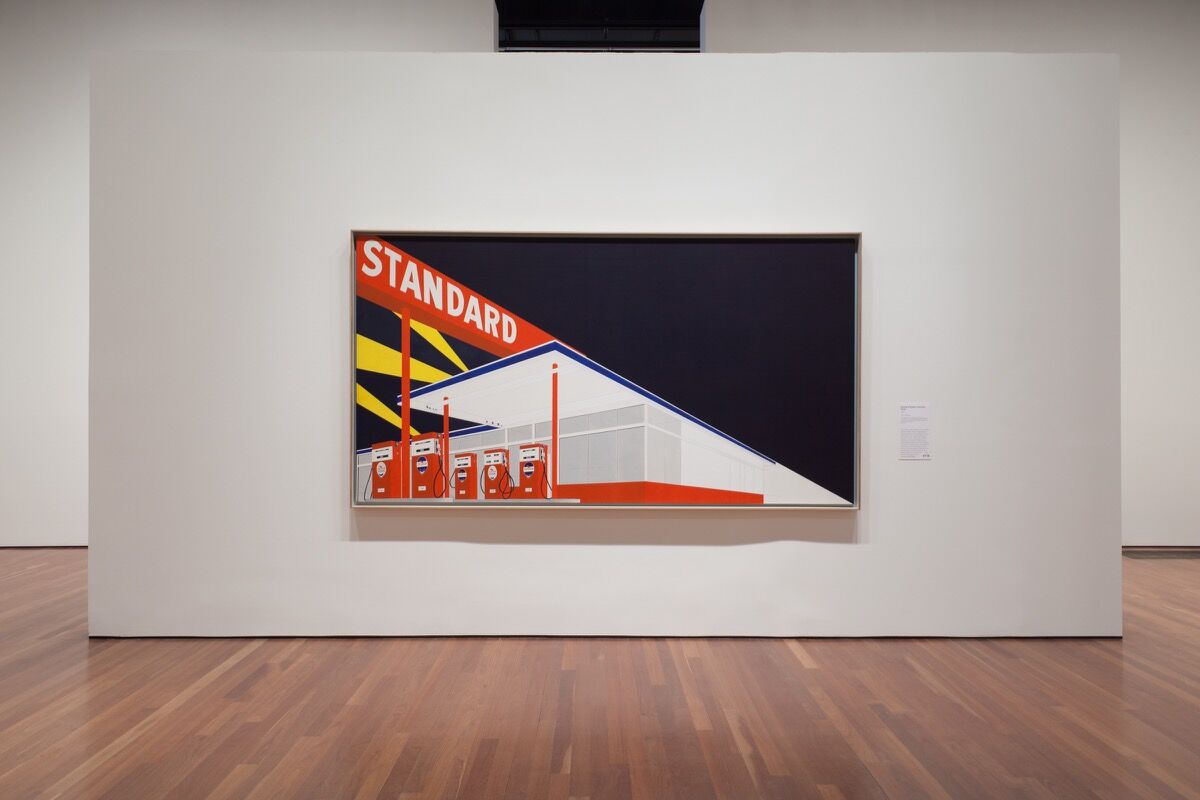 Installation view of “Ed Ruscha and the Great American West” at the de Young Museum, San Francisco, by Margo Moritz for Artsy.

10 Images
View Slideshow
For the purposes of this retrospective, curator Karin Breuer has focused less on a chronology and more on the works by Ruscha that have a clear Western inflection. Still, in seeing Breuer’s selection, you can grasp how his style has evolved over the decades. There’s a very early work called Texas (1962), where the word hovers at the top of the canvas over a painting of a grilled ribeye steak. The framing is a bit bulkier, and the brushstrokes are heavier, revealing the stylistic influence of a painter like
Jasper Johns
, who Ruscha cites as a defining artist (along with
Robert Rauschenberg
).
Also on view are his Rodeo charcoal drawings from 1969 and 1970, softer and more elegant, where the words look like they’re made from ribbons or rolls of paper. By the ’70s, Ruscha is playing with strong, sans serif typefaces, like in Slobberin Drunk at the Palomino (1975). Palomino refers to a famous North Hollywood country music venue (it closed in 1995), but it’s also the word used to describe a specific coloring for a horse, perhaps most notably the coloring of famous Hollywood mounts such as Trigger, Roy Roger’s horse, and Mr. Ed.

Ed Ruscha
Hollywood, 1968
de Young Museum
Advertisement
Ruscha is also a documentarian of sorts. He’s made photographic and painted inventories of parking lots, gasoline stations, swimming pools, rooftops views, and, most famously, the Hollywood sign. “I used to be a paperboy,” he told me when I expressed my admiration for one of his early art books Every Building on the Sunset Strip (1966). “As I’d walk along the streets, I identified with each house and who gets a newspaper and who doesn’t, and also which papers go on the porch—and dealing with this from a street level led me to want to capture and record this street in Los Angeles they called Sunset Boulevard. So I started photographing it in a democratic fashion in 1966 and I’ve been doing it regularly ever since.”
The photographs are unpretentious, neither especially gritty nor glamorous, and collaged into panoramas that strikingly resemble Google Street View, though there’s something a little more wobbly and wonderful about Ruscha’s. “I don’t particularly have a strategy to it or an agenda,” Ruscha admitted. “I’m not focusing on things that are noteworthy in a historical way, but more or less like—what does everything look like from a storefront plane?”
What Ruscha is hoping to capture isn’t easily articulated, even if the methodology is plainspoken and straightforward. The photograph of a parking lot is a photograph of a parking lot, but is it anything more? Of his 1963 book Twentysix Gasoline Stations, for example, he told The New Yorker in 2013 that he liked the words “gasoline” and the number “26” and that “that’s what I was after—the head-scratching.” (Famously, the Library of Congress declined the copy Ruscha sent; the book is now a collector’s item.) Still, some of these landmarks or places are captured at a sloping angle, and looking at them in succession can feel akin to watching a movie or as if you’re zooming past in a car. Even in their isolation, the images convey a sense of narrative. 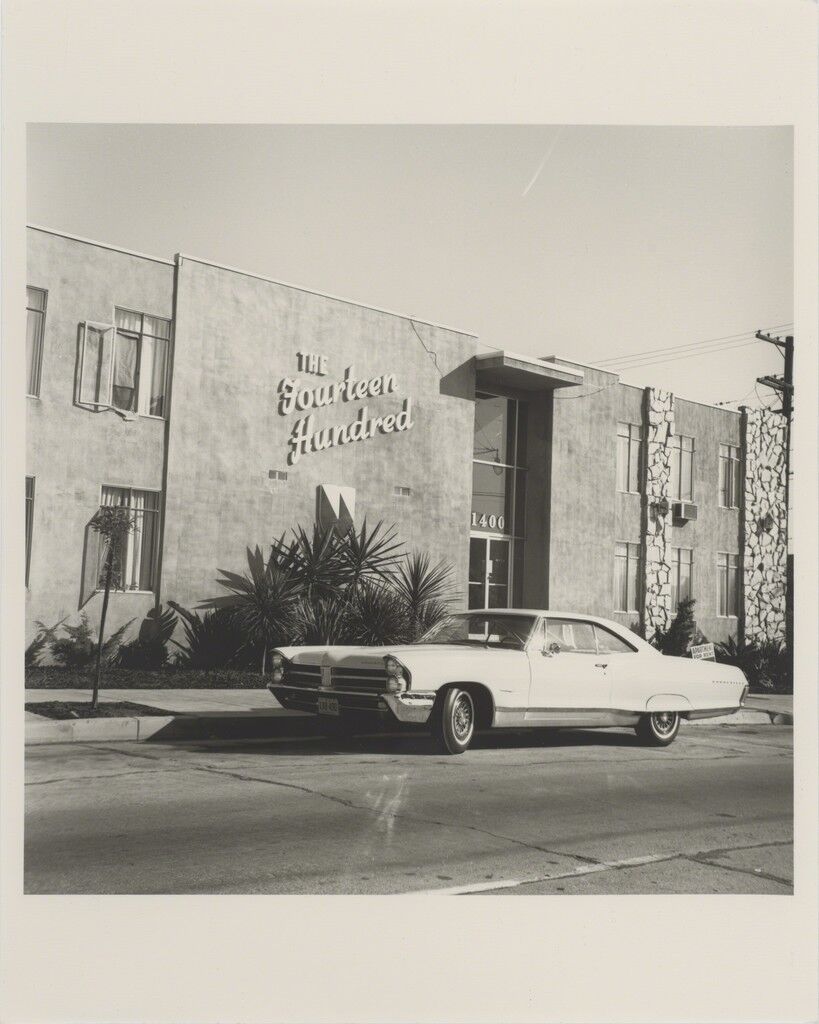 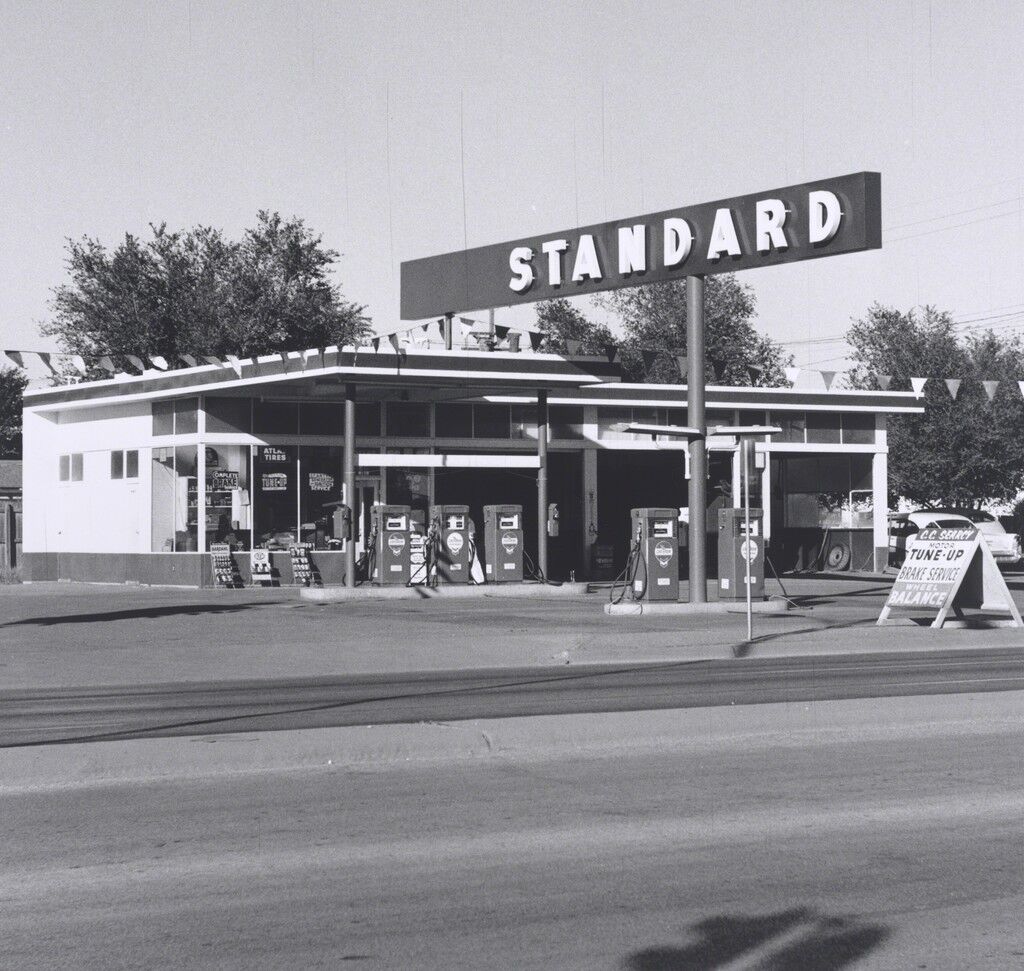 Ed Ruscha
Standard Station, Amarillo, Texas, 1962
de Young Museum
But the Los Angeles that Ruscha knows is changing. Hollywood, and the entertainment industry, is still the center, but there are now more art galleries, more collectors, more museums, and—perhaps most important—more artists, like
Alex Israel
or
Mark Bradford
, who are proud to make Los Angeles their home. The east side of the city has gentrified; Silver Lake and Echo Park are now places glamorized by recent television successes such as Transparent. Venice Beach is expensive and overrun with tourists.
“It’s not just one place having all the energy, like New York or Paris or London,” Jeff Poe of the gallery Blum & Poe told the New York Times this past March. “There’s no hot spot anymore; it’s all lukewarm, and I think Los Angeles is one of the warmest of those spots.” Ruscha feels conflicted about the changes taking place in the city. “I take a humanistic standpoint of feeling about it,” he told me. “There are so many people coming into the city now that it’s getting heavy with footprints, and it’s an enormous kind of pressure trying to think about what’s going to happen in the future here—there’s one part of me that wants things to stay exactly like they were in 1923.” 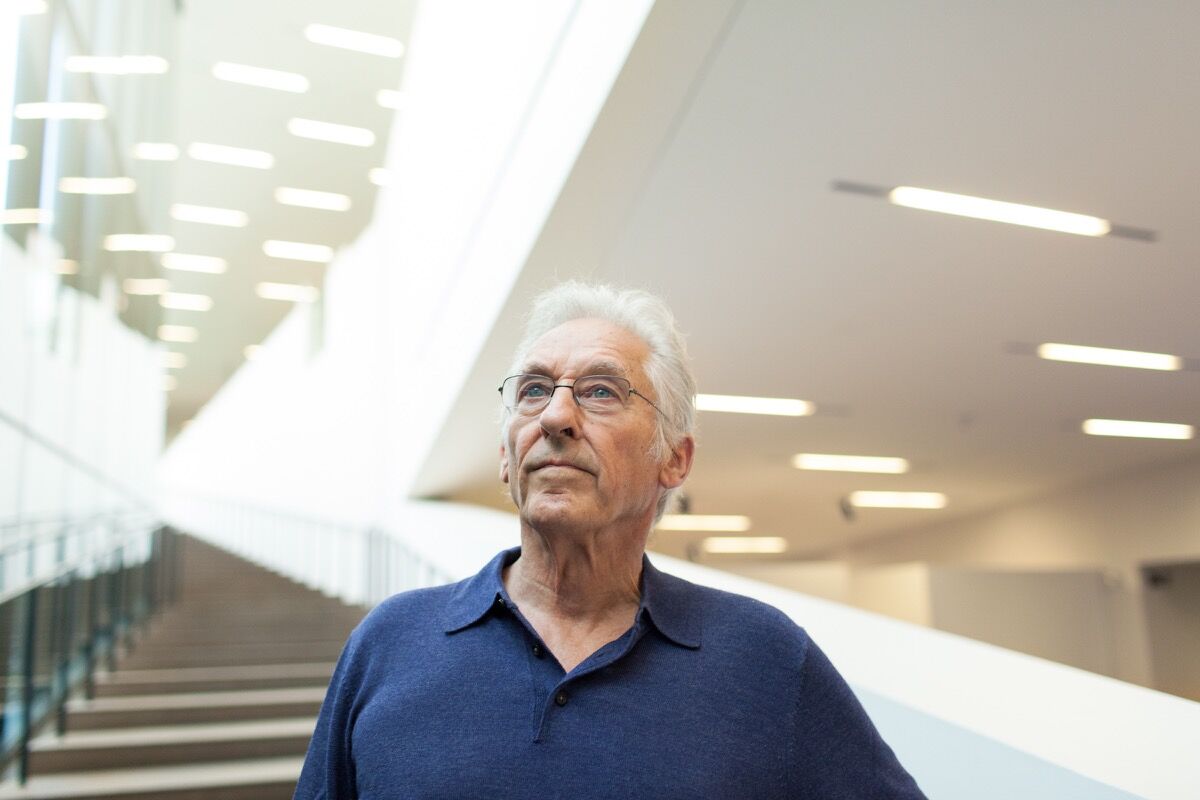 Portrait of Ed Ruscha by Margo Moritz for Artsy.

Could Ruscha become a living relic of this older Los Angeles? For now, he is more concerned with working on his art. Up next are two shows at Gagosian Gallery in Beverly Hills. And he’s preparing for another one in London this October. “I’m putting one foot in front of the other and moving along. Sometimes it’s slow paces but that’s okay, and I move along sort of like that.” He told me he wakes up at around a quarter to six each morning. “I don’t know why,” he said, “but if it’s past six, I’ve slept in. Then I read the newspapers, the Los Angeles Times and the New York Times, sometimes the San Francisco Chronicle. And I’ll go to the studio with my lunch pail.” He paused here and looked up at me. “I’m just kidding,” he said with a rueful smile. “I don’t have a lunch pail.”
Thessaly La Force
Further reading in Art