How Edvard Munch Expressed the Anxiety of the Modern World Portrait of Edvard Munch by ukjent, c. 1889. Via Wikimedia Commons. 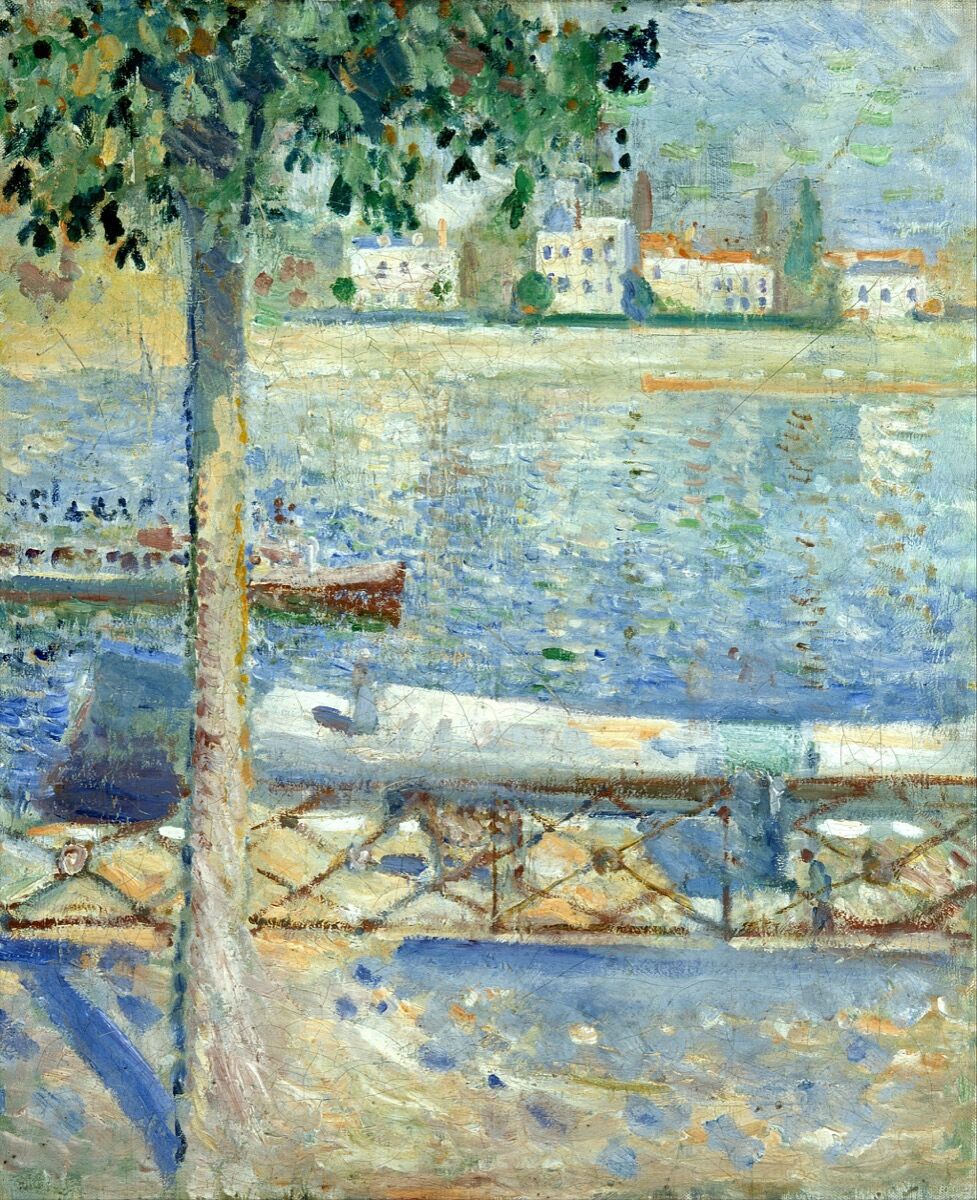 Edvard Munch, The Seine at Saint-Cloud, 1890. Via Wikimedia Commons.

Call it “The
Kahlo
Conundrum” or “The
van Gogh
Snare”: the old art-historical hazard wherein artists develop highly personalized aesthetics or themes in their work as an expression of psychological pressures in their lives—and we as art lovers readily leap to these as the sole answer to the meanings behind their work.
It could as easily be “The
Munch
Protocol,” wherein the paintings of Norway’s captivating
Symbolist
painter Edvard Munch—whose work is currently on view at SFMOMA in “Edvard Munch: Between the Clock and the Bed”—are regularly explained as a response to his difficult upbringing, troubled mental state, and unfulfilling romantic life.
Munch’s paintings—which absolutely respond to these experiences—are nonetheless also illustrative of a host of late-19th-century concerns about the health of the human mind at a time when modern cities were rising, old power structures were being overturned, and the possibility of a great cataclysm (eventually realized in World War I) loomed large. To leave this out is to tell half a tale.

A psyche shaped by illness and trauma

Even casual followers of Munch’s work may know his personal story well: he was born into a pious Norwegian home in 1863 and suffered several traumas early in his life. His mother and older sister died of tuberculosis before he turned 15, one of his younger sisters was diagnosed with mental illness, and his brother died as a young man. A sickly child himself, Edvard took to art to occupy time spent indoors. 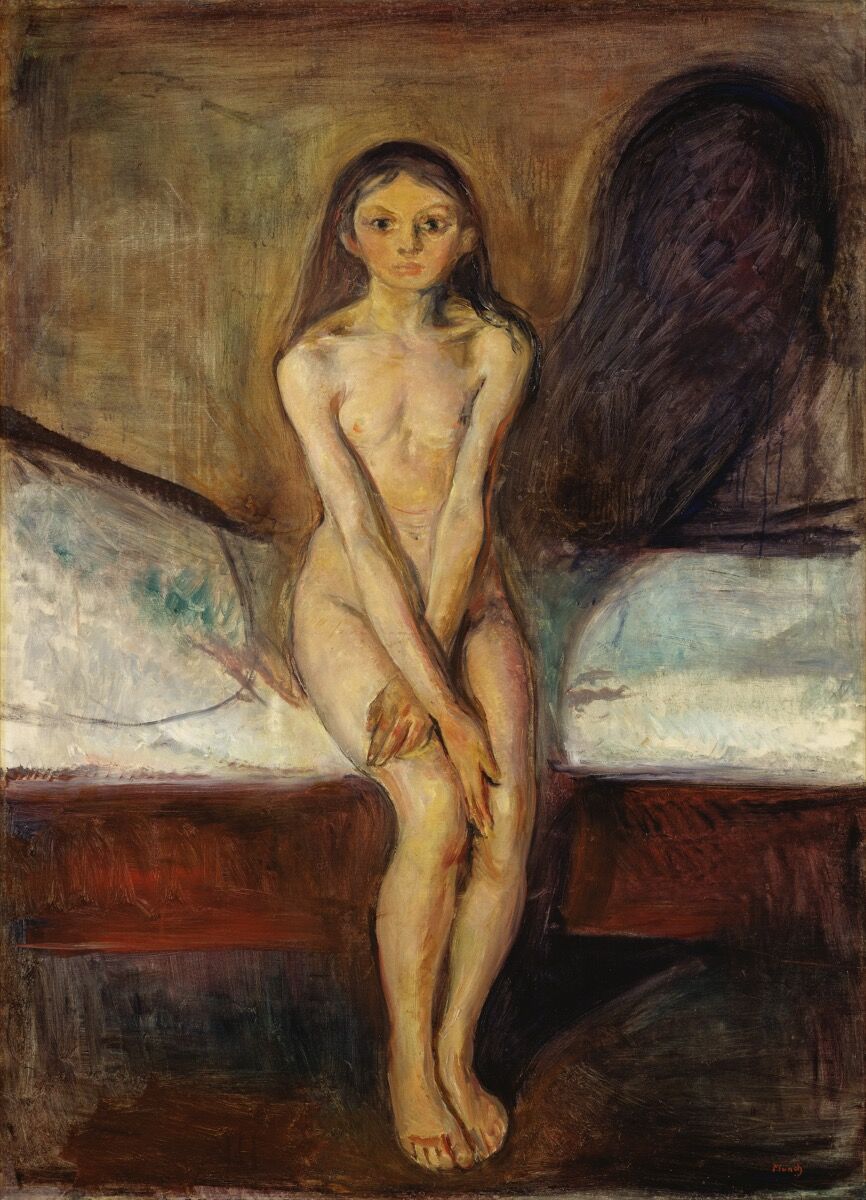 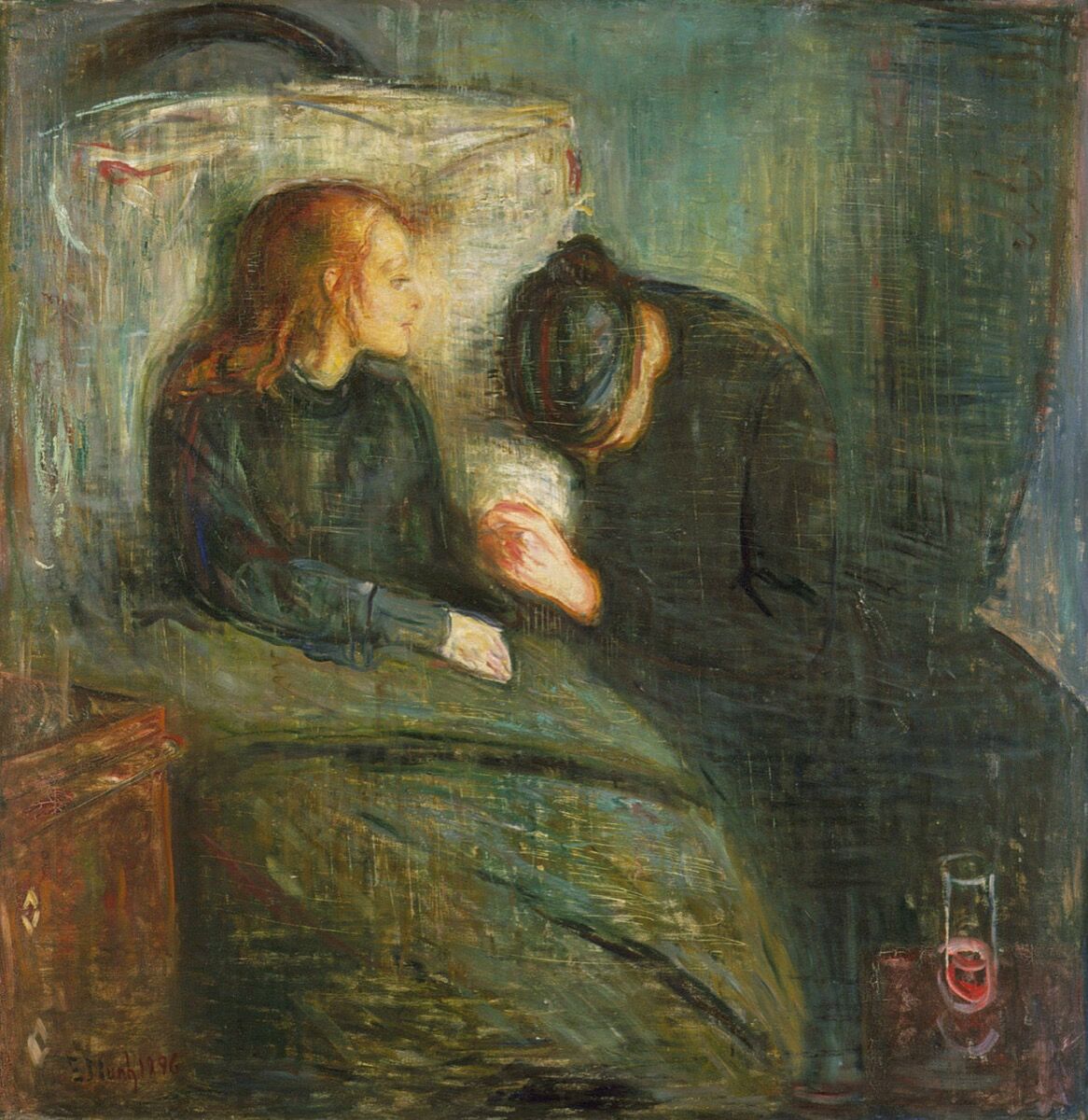 His religious father disapproved of his decision to leave engineering school to practice painting in his late teens and tried to divert his son from this “unholy trade” until his death in 1889, which left the Munch family impoverished. Much analysis of Munch’s work has been dictated by these personal turns, as well as by his breakdown in 1908—which landed him in clinical therapy—and his subsequent recovery.
The problem with an interpretation of Munch’s work that wholly privileges his biography is that such a reading runs the risk of projecting pop psychology onto it, rather than considering it as a broader psychological study of the human mind.
Munch was indeed a particularly tortured individual, at least in certain phases of his life. But he was also a thinking artist and intellectual who inhabited a fin-de-siècle moment where many of his fellow artists and cultural figures believed they were either living at the end of times or needed to drastically rethink human nature.

The age of Freud and psychoanalysis

Considering that Munch was of a generation with Sigmund Freud and the first rumblings of psychoanalysis, and that he too understood the power of subjective experience and the irrational forces of the mind, a more developed picture shows Munch as a diagnostician of the internal human condition who was well-educated on the artistic and intellectual trends of his time.
Munch’s early work, for example, was lighter in tone than his mature work and was largely influenced by the French
Impressionists
of the 1870s and 1880s. Though he would move on to darker subjects in the latter half of the 1880s, he was extremely prolific and continued painting bright landscapes and milder portraits of family members and friends throughout his career. 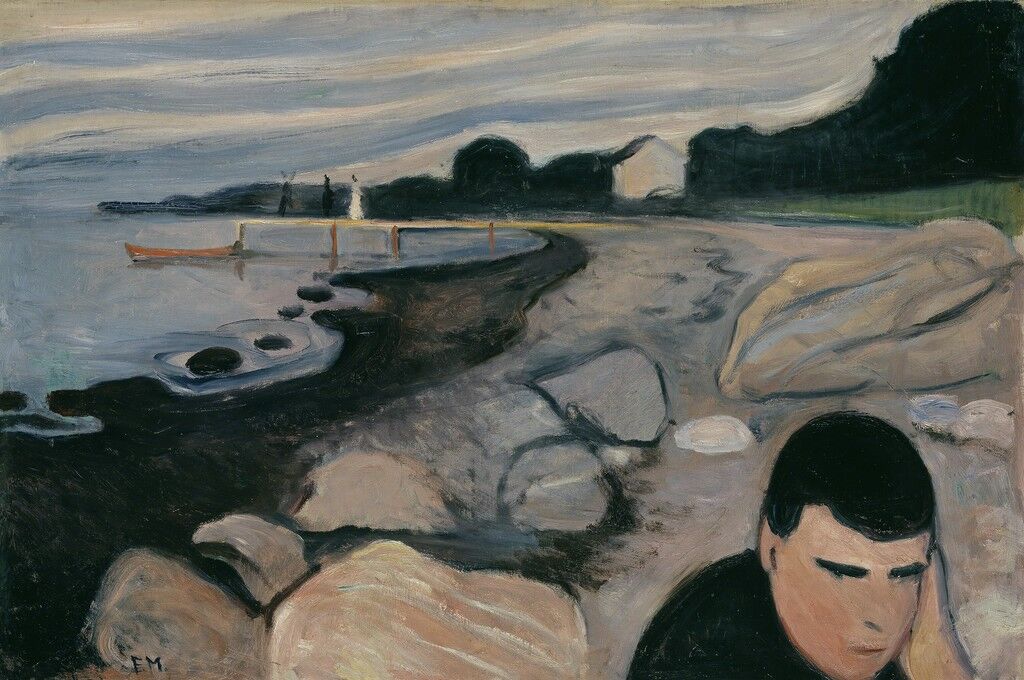 Edvard Munch
Melancholy, 1892
"Edvard Munch. Archetypes" at Museo Thyssen-Bornemisza, Madrid
Advertisement
The heavier, Symbolist-inspired works for which he would become known in the 1890s developed at a difficult moment in his life—but so did The Seine at Saint-Cloud, a gently rendered waterscape that toys with
Paul Cézanne
’s
Post-Impressionism
in its compositional structure. In no way is it suggestive of an embattled mental state.

Finding a visual language for the human condition

When Munch did begin painting darker subjects like The Sick Child—one of a series begun in 1885 that he would rework into the 1920s—he was responding to the psychic tumult of growing up in a home torn apart by illness, but he was also channeling the inward-looking aspects of the Symbolist movement, which took the form of a sort of troubled
Romanticism
near the end of the 19th century.
Like many of Munch’s most powerful works, The Sick Child is a painting about various psychological states. If the sick child (modeled after Munch’s own consumptive sister) conveys the inevitability of death, then the faceless female caretaker, who bows her head and refuses to meet the convalescent’s eye, takes our place as the helpless onlooker who represses the idea of mortality. 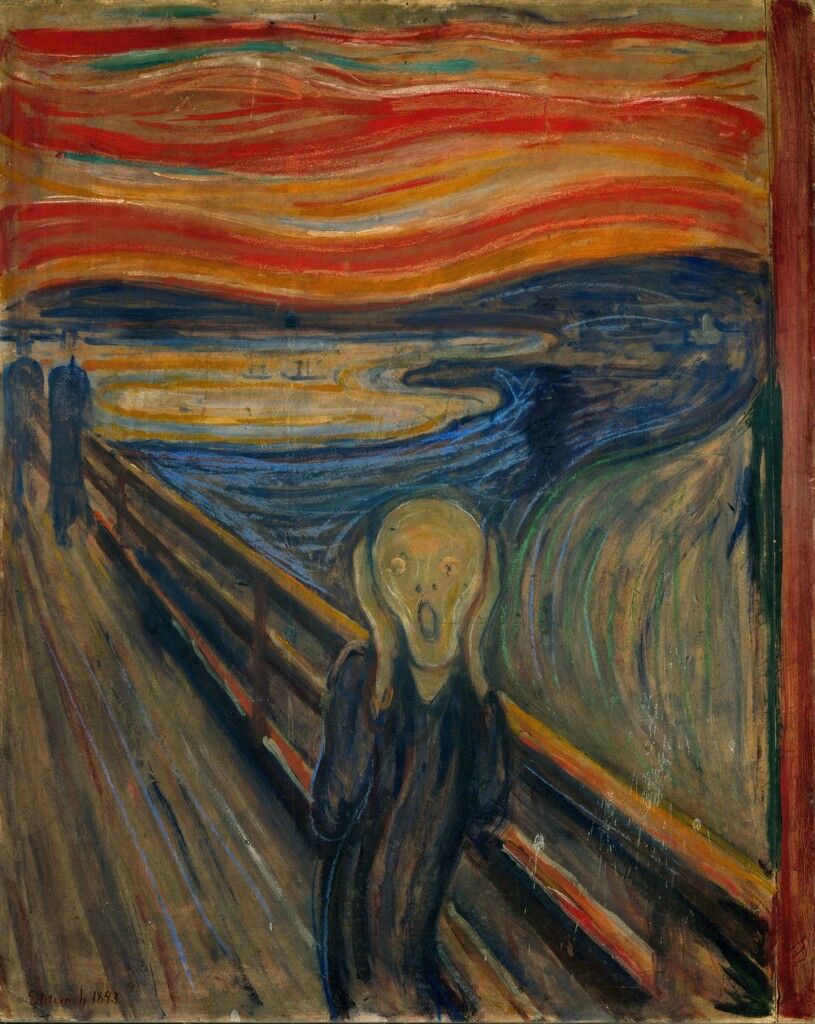 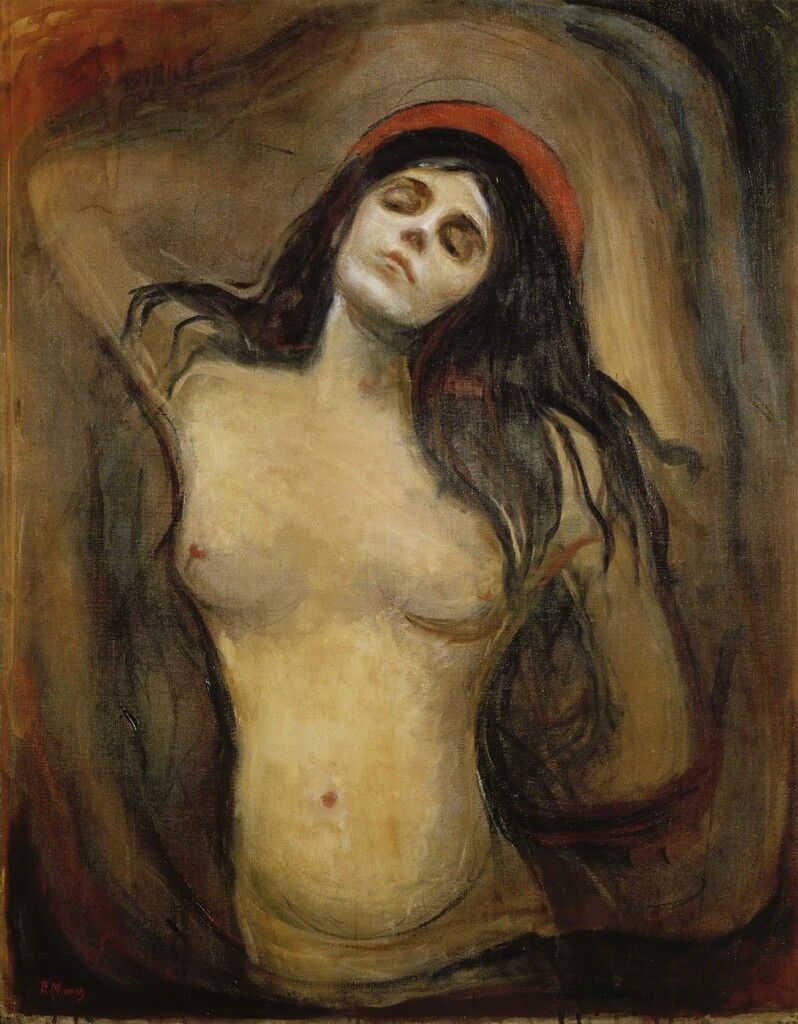 Edvard Munch
Madonna, 1894-1895
National Gallery, Oslo, Norway
The beatific, if exhausted, face of the sick child shows a greater acceptance of her fate. Both she and the caretaker are imbued with a grippingly palpable interiority, thanks to Munch’s ability to depict a complex and psychologically loaded situation without sentimentalizing his subjects.
His famous portrait of an anxious, naked girl sitting on the edge of a bed, in Puberty (1894-5), was concurrent with both his own feelings of sexual depression (and repression) and early psychological research into the stages of puberty in adolescents. Notably, Freud would publish his Three Essays on the Theory of Sexuality not long after, in 1905, including one of the first sustained analyses of child sexuality.

The last two decades of Munch’s life would be spent in relative solitude in Oslo, where he painted works that took on a generally brighter tone. Perhaps his spirits were raised by the clinical therapy he received to treat his anxiety and the critical acceptance that his work had gleaned in his home country.
His concern with Nordic folklore in those years was built upon his historian uncle Peter Andreas Munch’s research from the first half of the 19th century. It also evokes the experiments of the
Surrealists
, who sought to find psychological archetypes in humanity’s attempts to define itself through mythology. 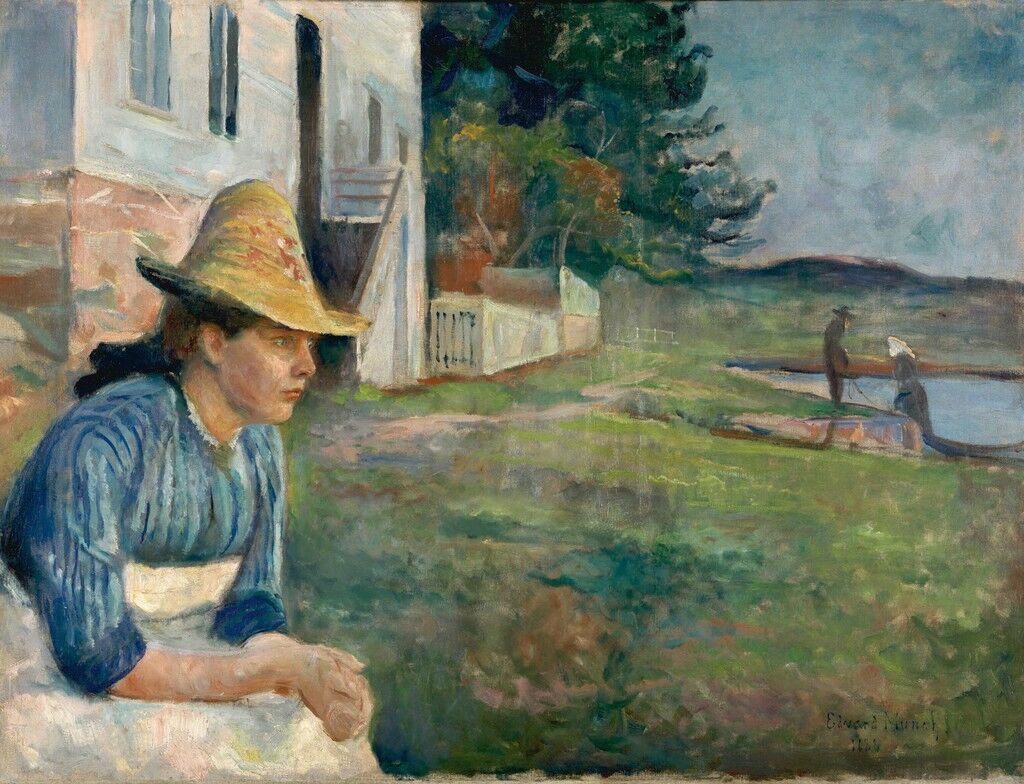 Edvard Munch
Evening, 1888
"Edvard Munch. Archetypes" at Museo Thyssen-Bornemisza, Madrid
As New York Times art critic Roberta Smith once stated, “Munch’s art offers some of the world’s most effective images of emotional states—a veritable international sign language of the soul,” noting that his characters are often haunted by nebulous feelings of “grief, jealousy, desire, or despair.” This helps explain why Munch has had such a lasting influence: how else would intensely personal work resonate with future generations so powerfully?
Munch’s fluid lines and arbitrary color choices—he often selected vibrant, non-naturalistic, and foreign colors to suggest deeper meaning—would be a powerful influence on the
Fauves
and the
German Expressionists
, especially the artists of
Die Brücke
. His dynamism, sometimes garish color contrasts, and his idea of depicting “states of mind” would also draw the attention of the Italian
Futurists
. And the flatness he employed in his swirling canvases had parallels with the work of
Gustav Klimt
and his fellow
Viennese Secessionists
, prefiguring a host of abstract aesthetics of the early 20th century.
Munch’s paintings both offer relatable portrayals of an artist’s deepest feelings, and serve as expressions of some of the most avant-garde intellectual methods and concerns of his time: psychiatry and psychoanalysis as a way to address the human condition; Symbolism and Expressionism as anti-rational exponents in art and literature; and myth and folklore as conduits through which to summon meaning.
Munch’s most famous painting, The Scream, has been taken as an illustration of helplessness and anxiety in World War II-era Existentialist thought. But it communicates the experience of fear and dread so bracingly that it feels just as current today as it did 124 years ago—because Munch saw beyond his own personal history, trauma, and mental illness to capture the universal, nuanced psychological manifestations of the human condition.
—Jon Mann
Related Stories