Why Do so Many Egyptian Statues Have Broken Noses? 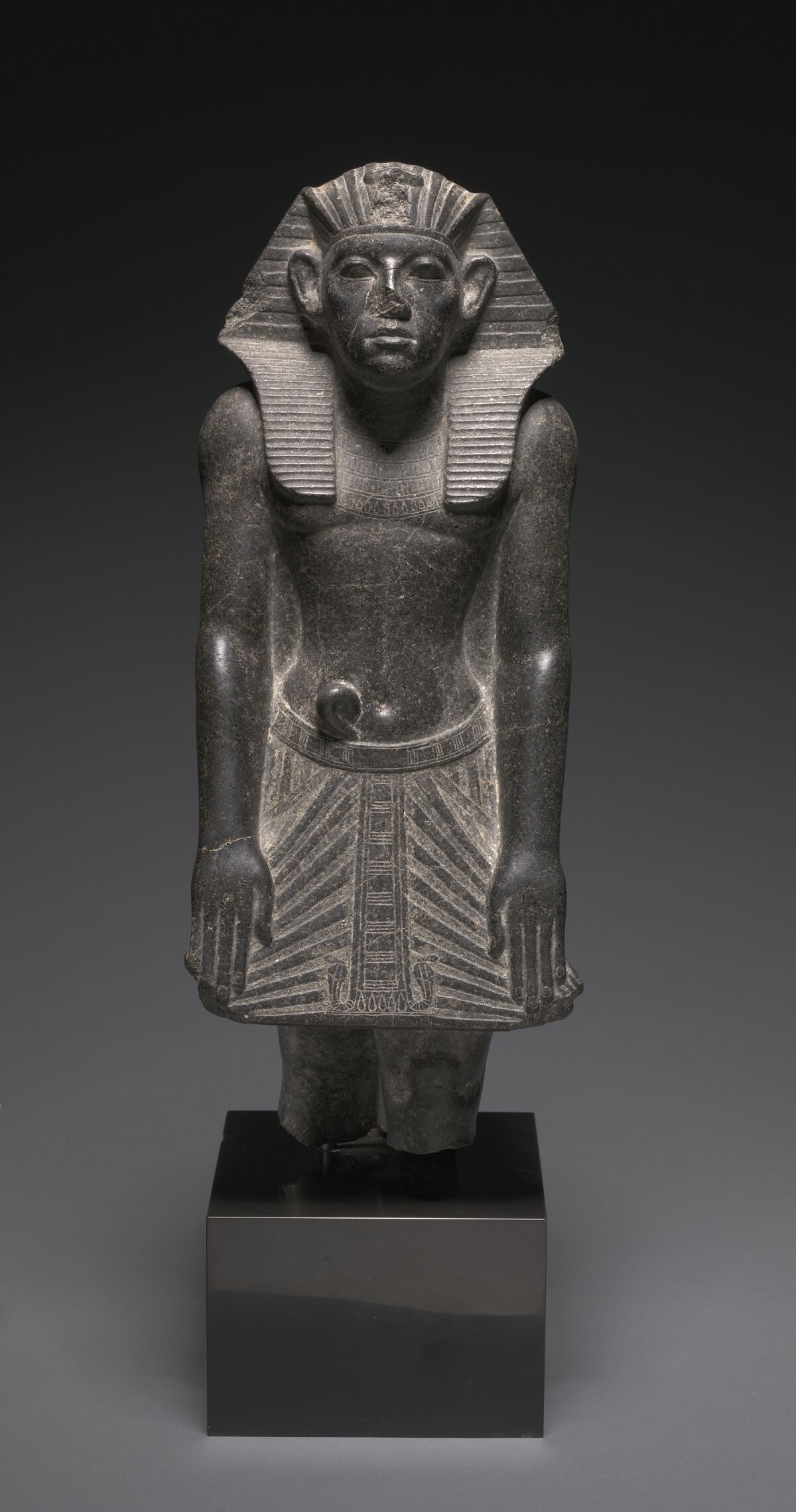 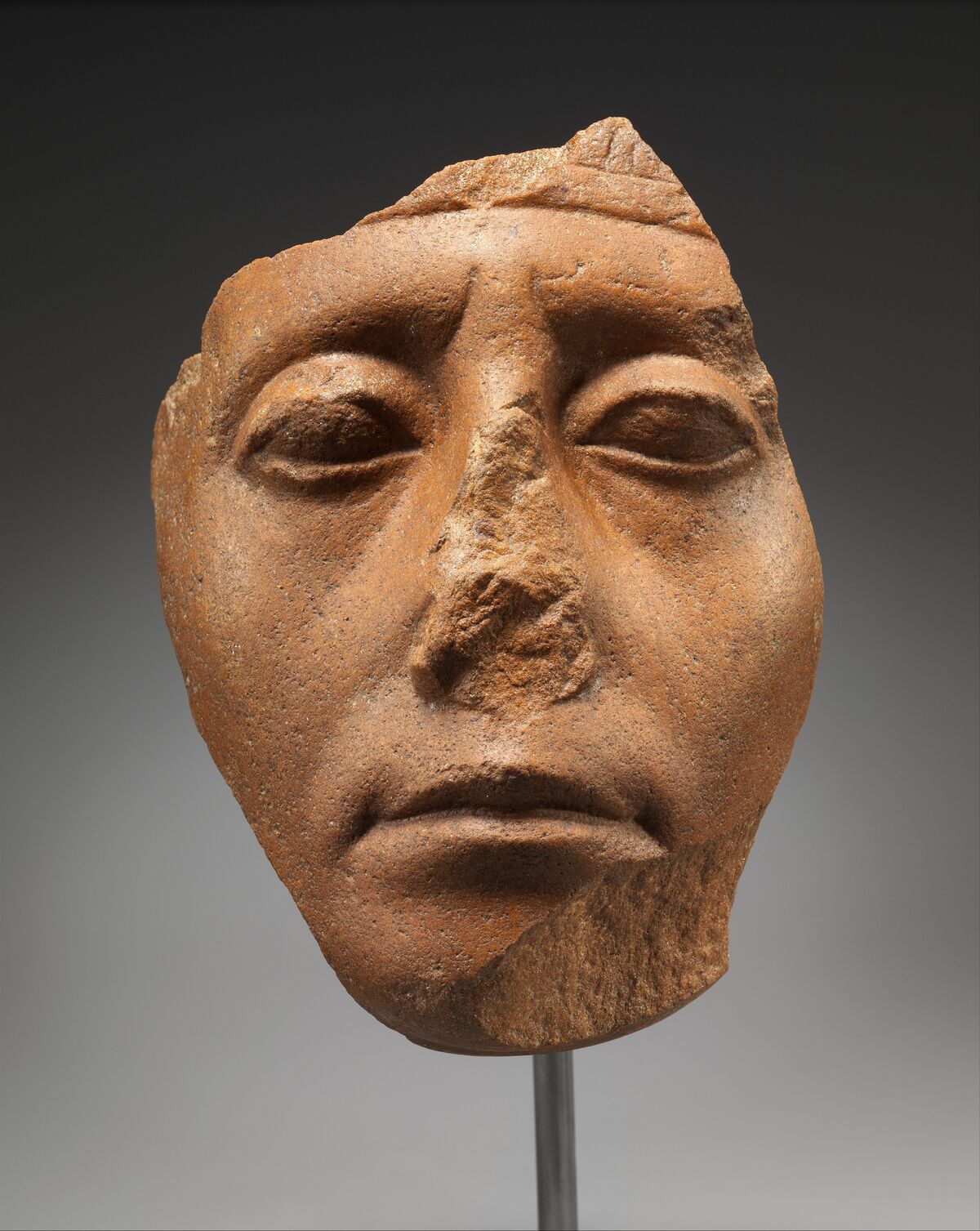 The most common question that curator Edward Bleiberg fields from visitors to the Brooklyn Museum’s
Egyptian art
galleries is a straightforward but salient one: Why are the statues’ noses broken? Bleiberg, who oversees the museum’s extensive holdings of Egyptian, Classical, and ancient Near Eastern art, was surprised the first few times he heard this question. He had taken for granted that the sculptures were damaged; his training in Egyptology encouraged visualizing how a statue would look if it were still intact. It might seem inevitable that after thousands of years, an ancient artifact would show wear and tear. But this simple observation led Bleiberg to uncover a widespread pattern of deliberate destruction, which pointed to a complex set of reasons why most works of Egyptian art came to be defaced in the first place.
Bleiberg’s research is now the basis of the poignant exhibition “Striking Power: Iconoclasm in Ancient Egypt.” A selection of objects from the Brooklyn Museum’s collection will travel to the Pulitzer Arts Foundation later this month under the co-direction of the latter’s associate curator, Stephanie Weissberg. Pairing damaged statues and reliefs dating from the 25th century B.C.E. to the 1st century C.E. with intact counterparts, the show testifies to ancient Egyptian artifacts’ political and religious functions—and the entrenched culture of iconoclasm that led to their mutilation.
In our own era of reckoning with national monuments and other public displays of art, “Striking Power” adds a germane dimension to our understanding of one of the world’s oldest and longest-lasting civilizations, whose visual culture, for the most part, remained unchanged over millennia. This stylistic continuity reflects—and directly contributed to—the empire’s long stretches of stability. But invasions by outside forces, power struggles between dynastic rulers, and other periods of upheaval left their scars. 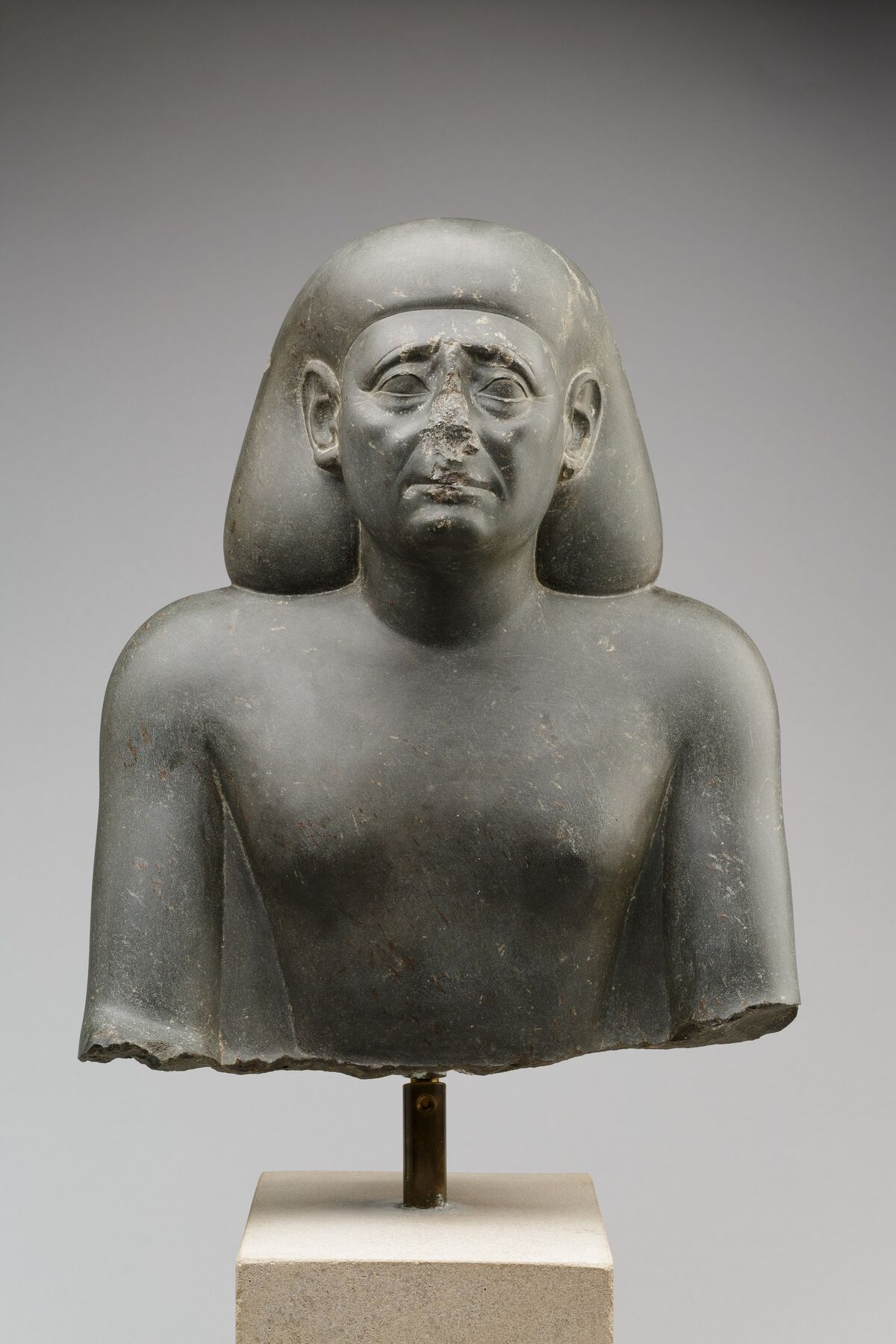 Bust of an Official, 380–342 B.C. Courtesy of The Metropolitan Museum of Art. 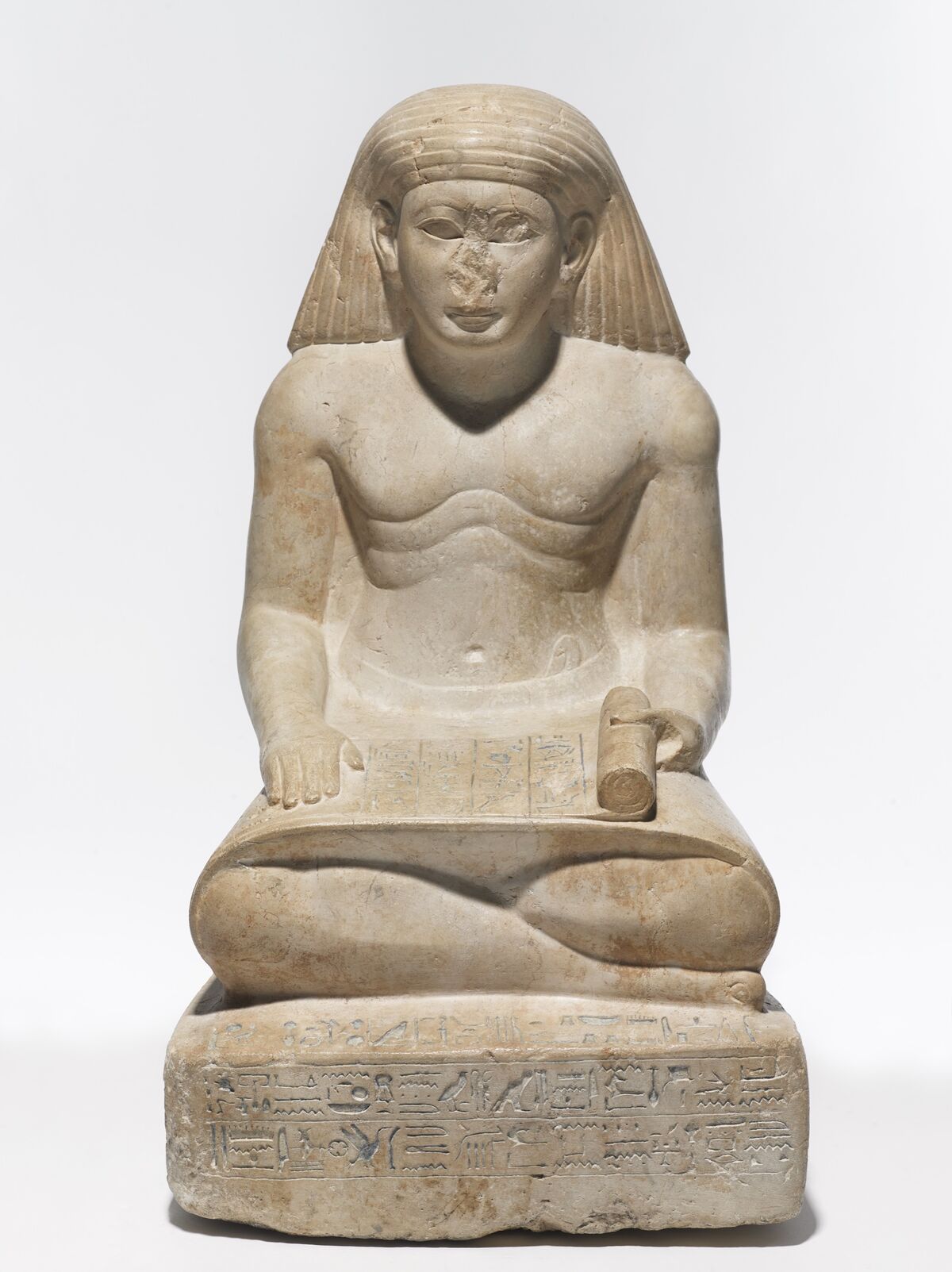 “The consistency of the patterns where damage is found in sculpture suggests that it’s purposeful,” Bleiberg said, citing myriad political, religious, personal, and criminal motivations for acts of vandalism. Discerning the difference between accidental damage and deliberate vandalism came down to recognizing such patterns. A protruding nose on a three-dimensional statue is easily broken, he conceded, but the plot thickens when flat reliefs also sport smashed noses.
The ancient Egyptians, it’s important to note, ascribed important powers to images of the human form. They believed that the essence of a deity could inhabit an image of that deity, or, in the case of mere mortals, part of that deceased human being’s soul could inhabit a statue inscribed for that particular person. These campaigns of vandalism were therefore intended to “deactivate an image’s strength,” as Bleiberg put it.
Tombs and temples were the repositories for most sculptures and reliefs that had a ritual purpose. “All of them have to do with the economy of offerings to the supernatural,” Bleiberg said. In a tomb, they served to “feed” the deceased person in the next world with gifts of food from this one. In temples, representations of gods are shown receiving offerings from representations of kings, or other elites able to commission a statue. 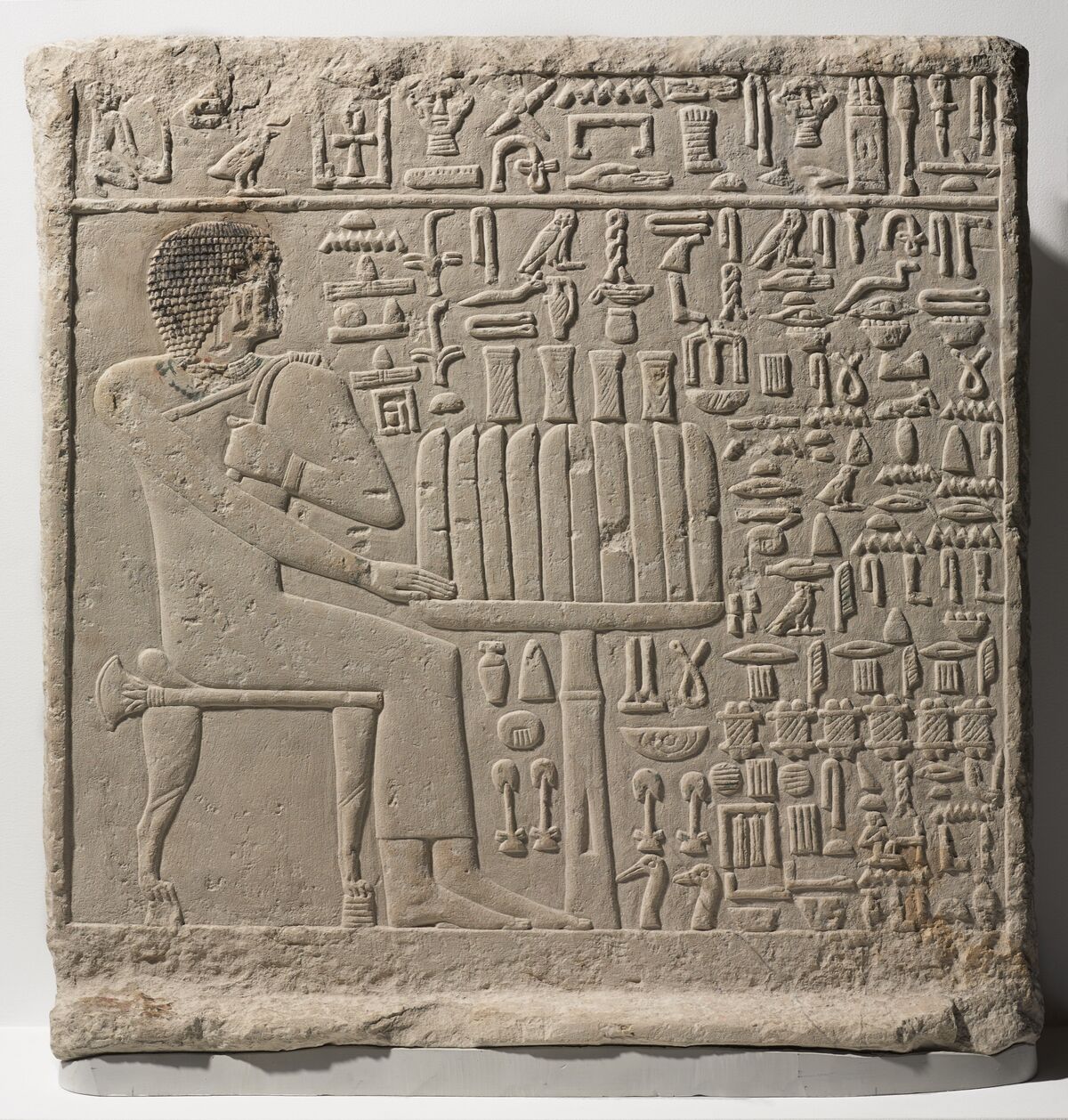 Advertisement
“Egyptian state religion,” Bleiberg explained, was seen as “an arrangement where kings on Earth provide for the deity, and in return, the deity takes care of Egypt.” Statues and reliefs were “a meeting point between the supernatural and this world,” he said, only inhabited, or “revivified,” when the ritual is performed. And acts of iconoclasm could disrupt that power.
“The damaged part of the body is no longer able to do its job,” Bleiberg explained. Without a nose, the statue-spirit ceases to breathe, so that the vandal is effectively “killing” it. To hammer the ears off a statue of a god would make it unable to hear a prayer. In statues intended to show human beings making offerings to gods, the left arm—most commonly used to make offerings—is cut off so the statue’s function can’t be performed (the right hand is often found axed in statues receiving offerings).
“In the Pharaonic period, there was a clear understanding of what sculpture was supposed to do,” Bleiberg said. Even if a petty tomb robber was mostly interested in stealing the precious objects, he was also concerned that the deceased person might take revenge if his rendered likeness wasn’t mutilated. 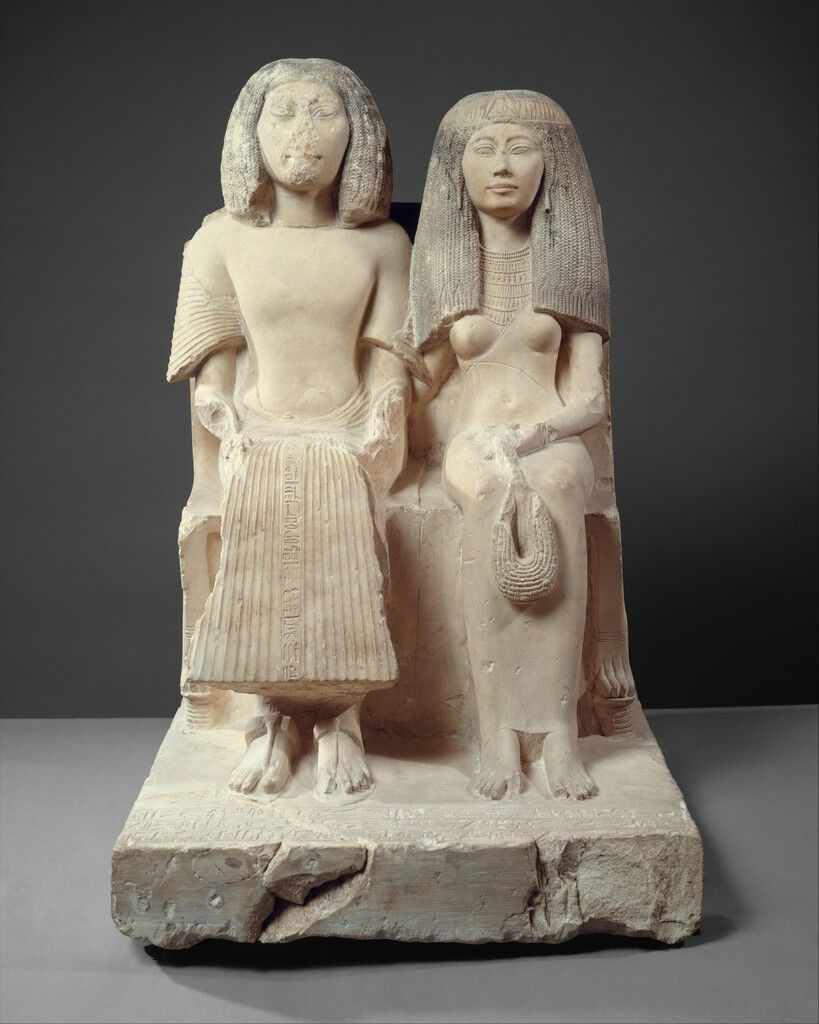 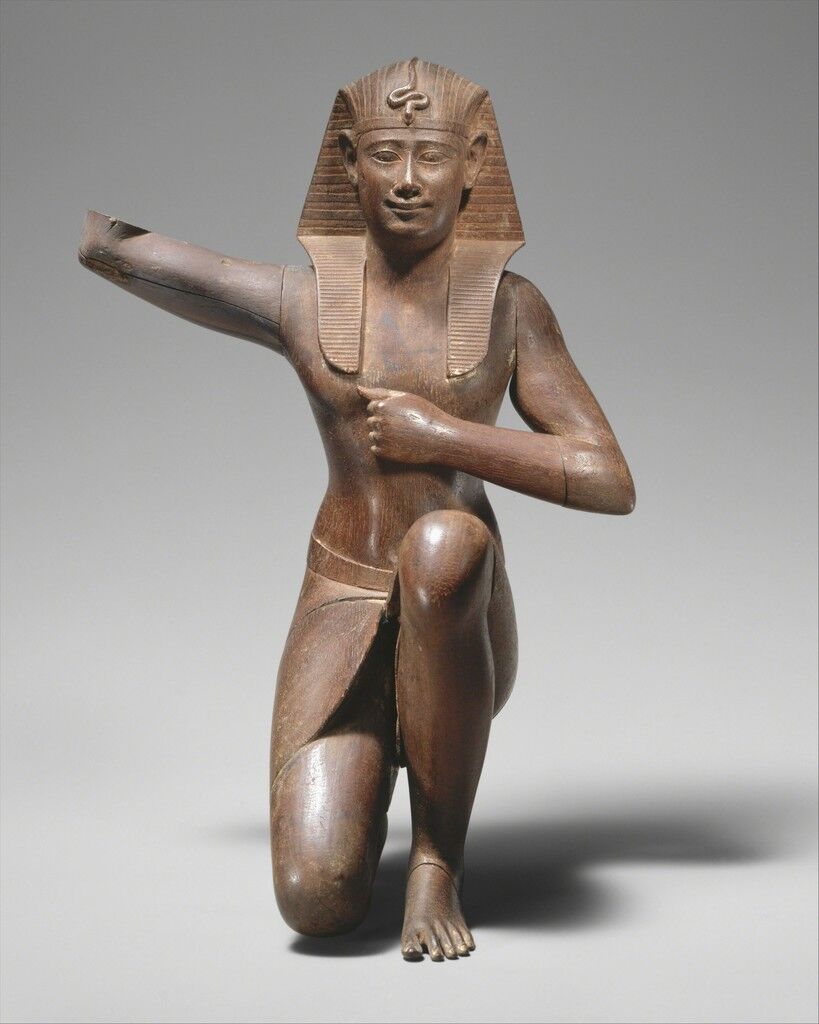 Unknown Egyptian
Ritual Figure, 380–246 B.C.
The Metropolitan Museum of Art
The prevalent practice of damaging images of the human form—and the anxiety surrounding the desecration—dates to the beginnings of Egyptian history. Intentionally damaged mummies from the prehistoric period, for example, speak to a “very basic cultural belief that damaging the image damages the person represented,” Bleiberg said. Likewise, how-to hieroglyphics provided instructions for warriors about to enter battle: Make a wax effigy of the enemy, then destroy it. Series of texts describe the anxiety of your own image becoming damaged, and pharaohs regularly issued decrees with terrible punishments for anyone who would dare threaten their likeness.
Indeed, “iconoclasm on a grand scale…was primarily political in motive,” Bleiberg writes in the exhibition catalogue for “Striking Power.” Defacing statues aided ambitious rulers (and would-be rulers) with rewriting history to their advantage. Over the centuries, this erasure often occurred along gendered lines: The legacies of two powerful Egyptian queens whose authority and mystique fuel the cultural imagination—Hatshepsut and Nefertiti—were largely erased from visual culture.
“Hatshepsut’s reign presented a problem for the legitimacy of Thutmose III’s successor, and Thutmose solved this problem by virtually eliminating all imagistic and inscribed memory of Hatshepsut,” Bleiberg writes. Nefertiti’s husband Akhenaten brought a rare stylistic shift to Egyptian art in the Amarna period (ca. 1353–36 B.C.E.) during his religious revolution. The successive rebellions wrought by his son Tutankhamun and his ilk included restoring the longtime worship of the god Amun; “the destruction of Akhenaten’s monuments was therefore thorough and effective,” Bleiberg writes. Yet Nefertiti and her daughters also suffered; these acts of iconoclasm have obscured many details of her reign. 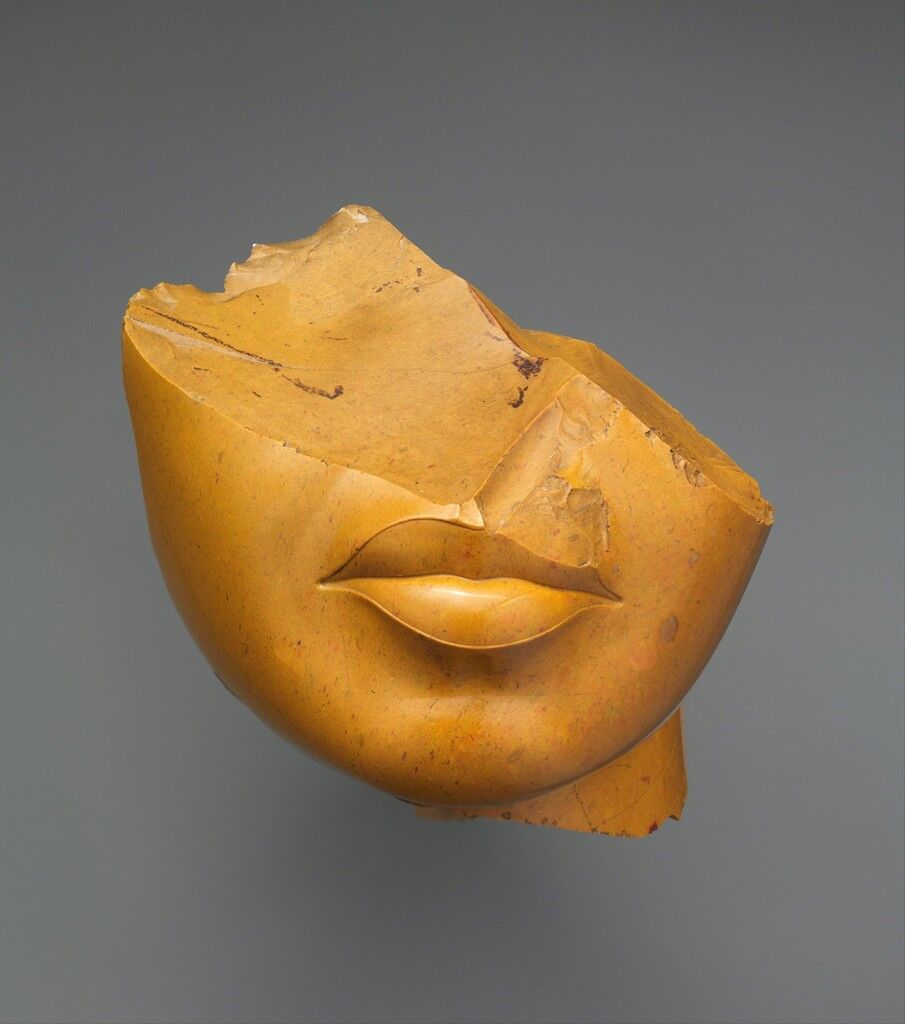 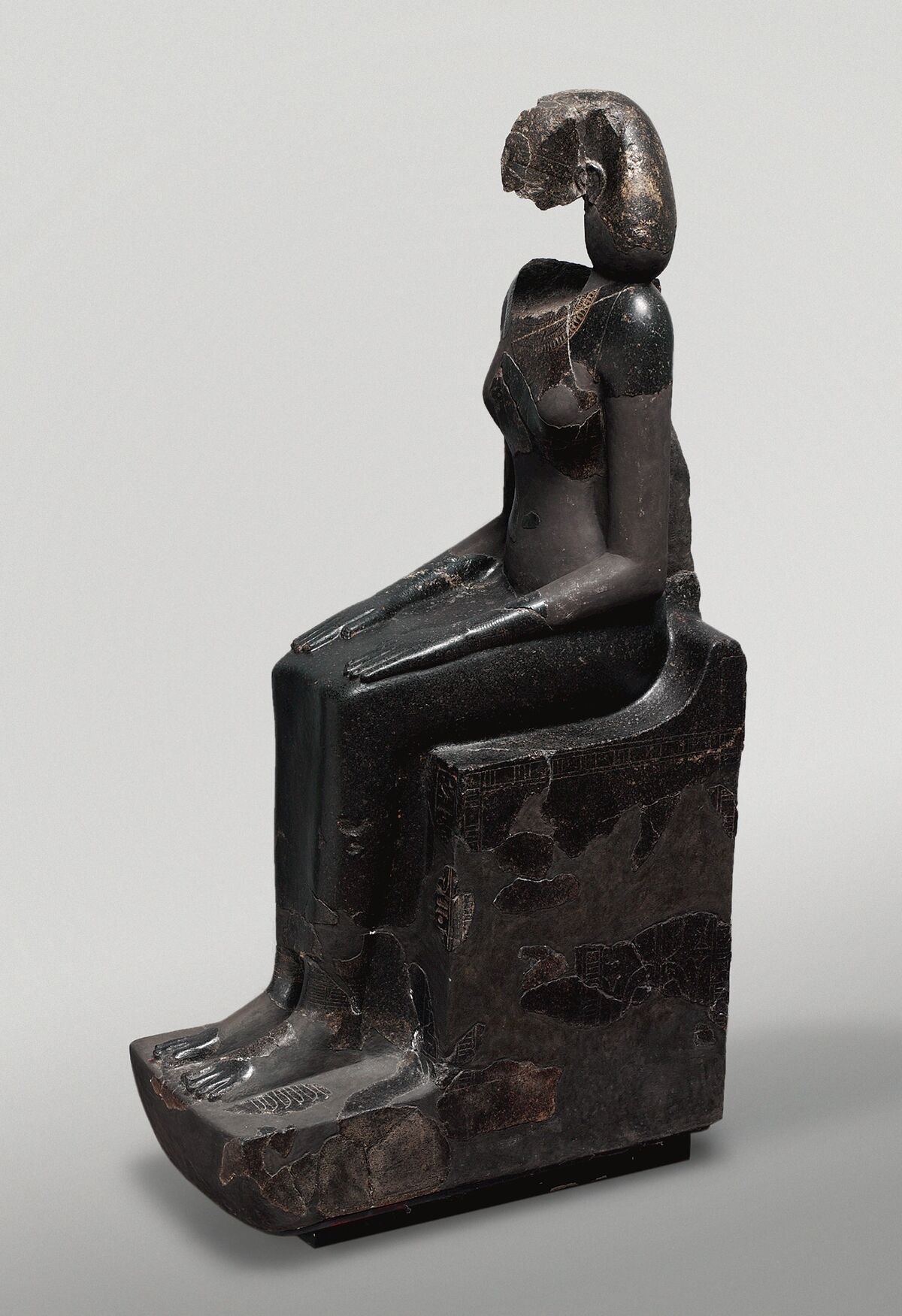 Ancient Egyptians took measures to safeguard their sculptures. Statues were placed in niches in tombs or temples to protect them on three sides. They would be secured behind a wall, their eyes lined up with two holes, before which a priest would make his offering. “They did what they could,” Bleiberg said. “It really didn’t work that well.”
Speaking to the futility of such measures, Bleiberg appraised the skill evidenced by the iconoclasts. “They were not vandals,” he clarified. “They were not recklessly and randomly striking out works of art.” In fact, the targeted precision of their chisels suggests that they were skilled laborers, trained and hired for this exact purpose. “Often in the Pharaonic period,” Bleiberg said, “it’s really only the name of the person who is targeted, in the inscription. This means that the person doing the damage could read!”
The understanding of these statues changed over time as cultural mores shifted. In the early Christian period in Egypt, between the 1st and 3rd centuries C.E., the indigenous gods inhabiting the sculptures were feared as pagan demons; to dismantle paganism, its ritual tools—especially statues making offerings—were attacked. After the Muslim invasion in the 7th century, scholars surmise, Egyptians had lost any fear of these ancient ritual objects. During this time, stone statues were regularly trimmed into rectangles and used as building blocks in construction projects. 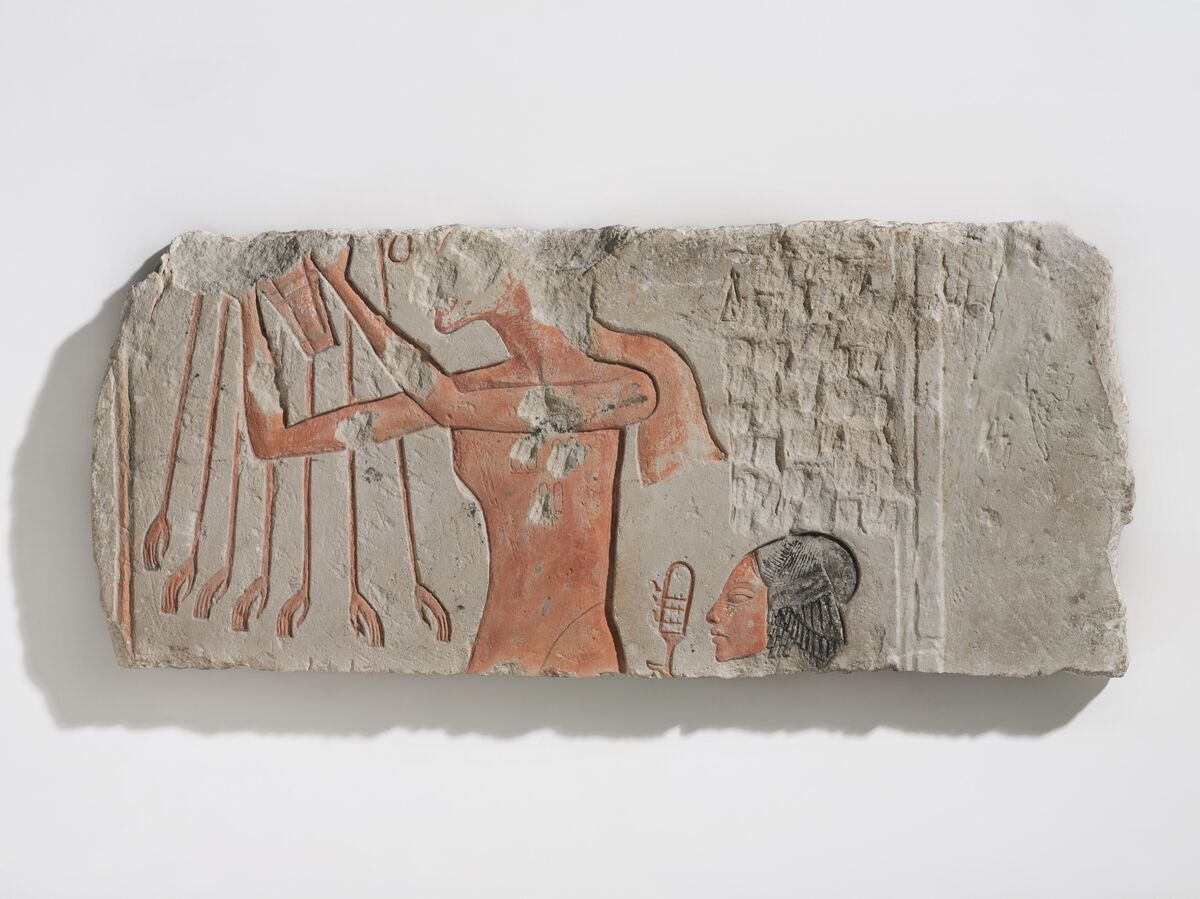 Akhenaten and His Daughter Offering to the Aten, ca. 1353–36 B.C.E. Courtesy of the Brooklyn Museum.

“Ancient temples were somewhat seen as quarries,” Bleiberg said, noting that “when you walk around medieval Cairo, you can see a much more ancient Egyptian object built into a wall.”
Such a practice seems especially outrageous to modern viewers, considering our appreciation of Egyptian artifacts as masterful works of fine art, but Bleiberg is quick to point out that “ancient Egyptians didn’t have a word for ‘art.’ They would have referred to these objects as ‘equipment.’” When we talk about these artifacts as works of art, he said, we de-contextualize them. Still, these ideas about the power of images are not peculiar to the ancient world, he observed, referring to our own age of questioning cultural patrimony and public monuments.
“Imagery in public space is a reflection of who has the power to tell the story of what happened and what should be remembered,” Bleiberg said. “We are witnessing the empowerment of many groups of people with different opinions of what the proper narrative is.” Perhaps we can learn from the pharaohs; how we choose to rewrite our national stories might just take a few acts of iconoclasm.
Julia Fiore
Related Stories

How Nefertiti Became a Powerful Symbol in Contemporary Art

How a 2,000-Year-Old Egyptian Temple Ended Up in Manhattan 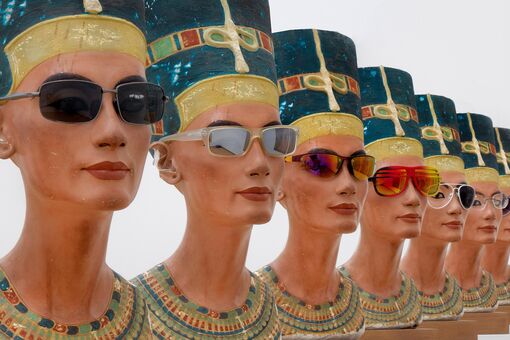 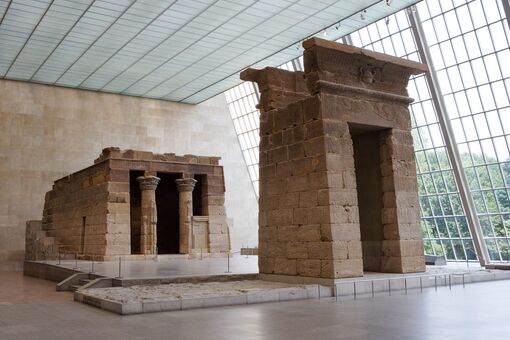 How a 2,000-Year-Old Egyptian Temple Ended Up in Manhattan
Meredith Mendelsohn
Apr 26, 2017 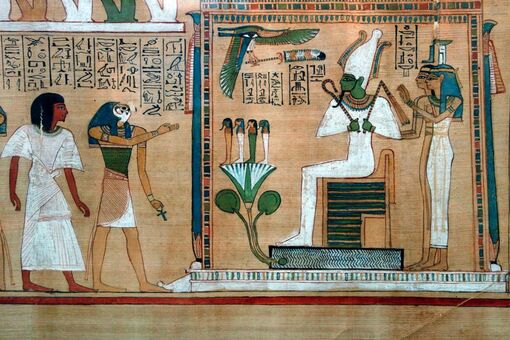 The Map That Revealed How Ancient Egyptians Pictured the Afterlife
Gabrielle Hick
Dec 8, 2017