Elia Alba Is Turning Artists of Color into Fantasy Icons 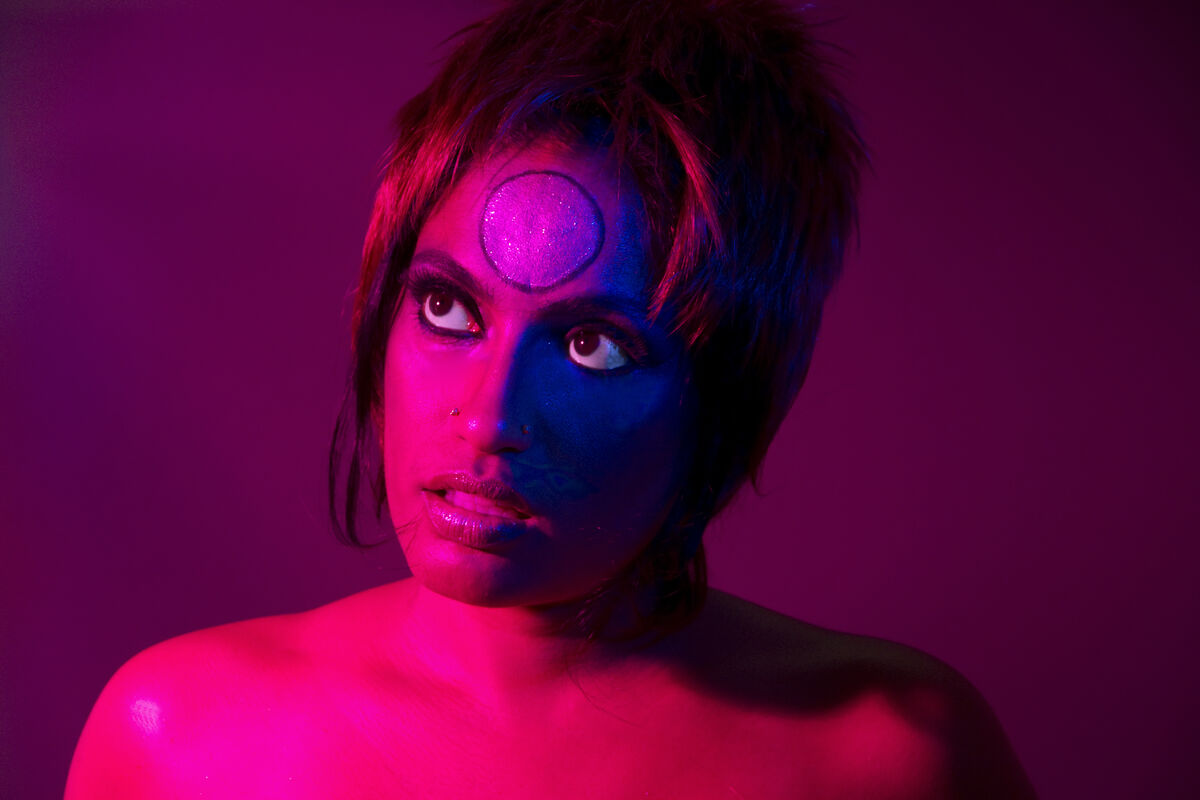 Magazines have an uncanny habit of repeating certain formulas. Print glossies, for instance, are fond of the multi-page portrait spread that assigns a character, or archetype, to each photographic subject. Picture a glamour shot of a man striding purposefully across the page—dubbed “The Innovator”—or a woman in overalls lost in a moment of focused attention to her materials in an art-strewn studio: “The Creator.”
It’s this aggrandizing tendency, rampant in magazines like Glamour and Vanity Fair, as well as the relative lack of people of color that appear within such pages, that first inspired an ongoing project by the artist
Elia Alba
called The Supper Club. Beginning in 2012, she set about reimagining fellow artists of color in fantastical images, often with an Afrofuturist aesthetic, or that present them as A-list celebrities. She took Vanity Fair’s “Hollywood Edition” as a model of sorts. For each of her subjects, she dreamed up a tableau and accompanying moniker that characterized their artistic practices.
Hank Willis Thomas
, known for his critically incisive, politically charged artwork addressing race in America, becomes “The Professor,” standing amid what appears to be a high school history classroom.
Abigail DeVille
, whose transporting sculptures and installations suggest temporary structures or otherworldly spaceships assembled from detritus, is “The Pulsar.” Dressed like a psychedelic warrior from the future, she emits rays of green light from her body.
Five years and some 60 portraits since she began shooting artists of color, Alba will present the images at New York’s 8th Floor gallery in September, alongside transcripts from the accompanying supper series that she hosts for her photo subjects and peers. (To date, over 20 have taken place.) The photographs and conversations will be published together in a book slated for 2018. 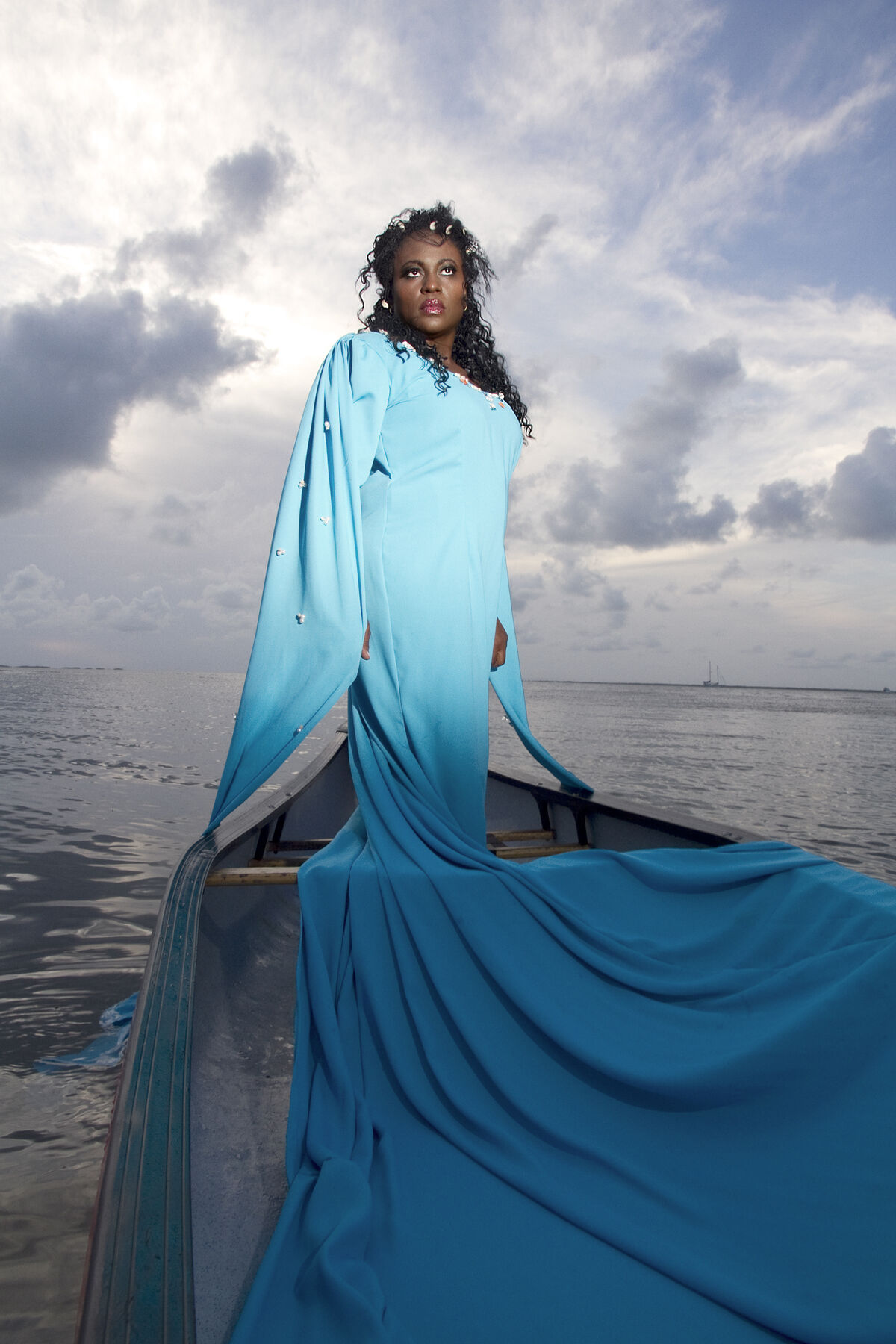 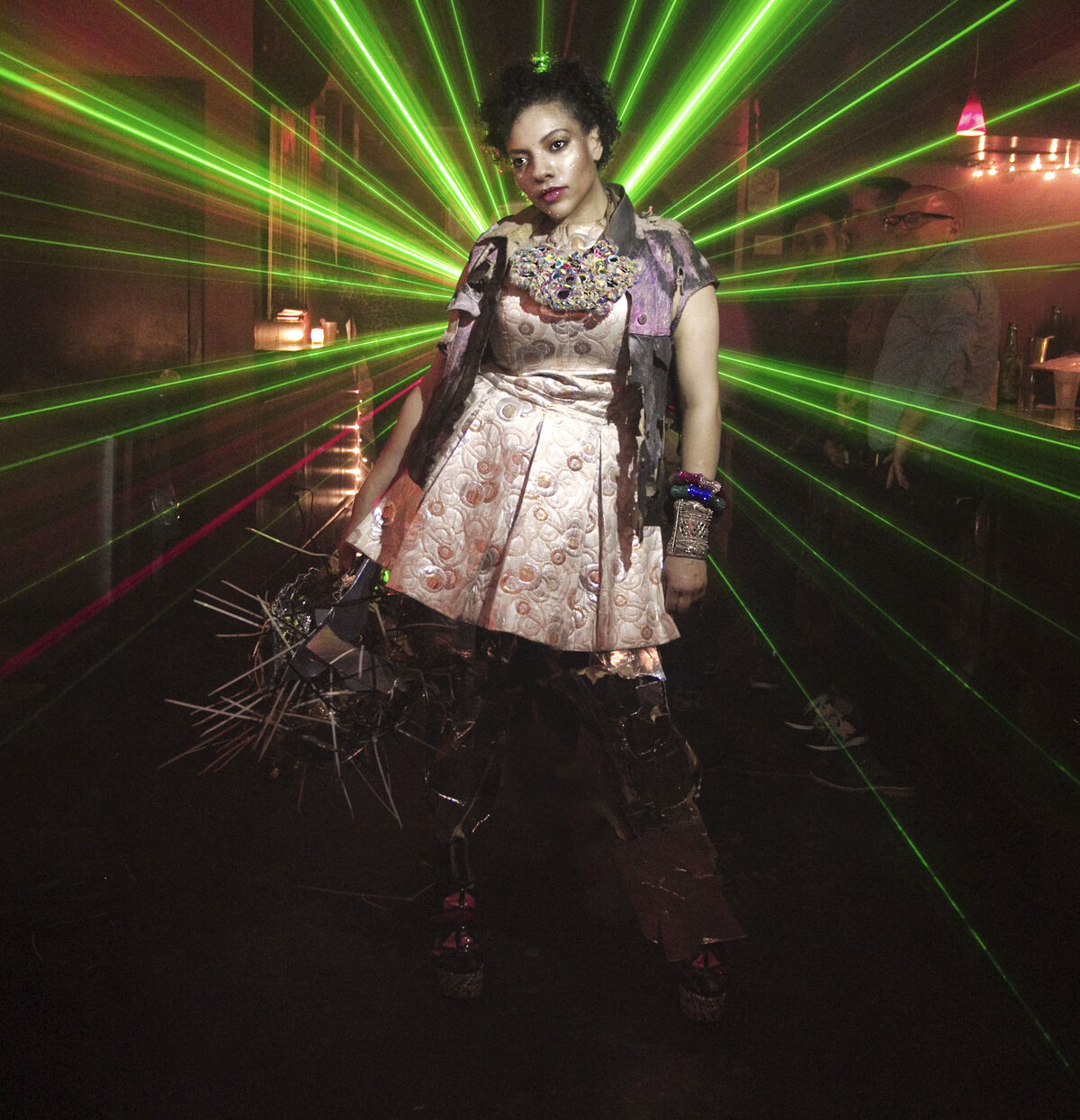 Alba’s portraits are rich in cultural references. Aside from many of them being informed by Afrofuturism—a philosophy and aesthetic blending Afrocentrism with science fiction that is most readily associated with jazz composer Sun Ra’s film and album, Space Is the Place (1972–74)—they also draw from a range of film, music, and art history. Her sources include 1920s images of Buster Keaton (for her portrait of
Michael Paul Britto
); the album covers of 1970s funk bank Aquarian Dreams (
Saya Woolfalk
); and a painting by
Frida Kahlo
(the Garcia sisters).
For her portrait of
Chitra Ganesh
, an artist who creates large-scale narrative compositions that examine gender and colonialism and are infused with the iconographies and mythologies of Eastern religions, Alba looked to David Bowie. Finding resonance between Bowie’s gender-fluidity and Ganesh’s work, she drew from a series of photos that photographer Mick Rock took of Bowie wearing a giant bindi dot. In Alba’s portrait of Ganesh, “The Dreamweaver,” she wears an oversized bindi dot and a mullet crop, and is bathed in fluorescent pink light.
Not satisfied with the images alone, however, Alba wanted to capture another dimension of her portrait subjects. “I wanted to give [my subjects] a voice, too,” she says. But rather than conduct one-on-one interviews with Thomas, DeVille, Ganesh, and the 57 other artists she photographed, Alba decided to initiate a more dynamic exchange of words around a dinner table. (She’s since begun to view the transcripts of these dialogues as a work of art in their own right, an evolving oral history.)
The first iteration of the supper series, supported by the non-profit art space Recess, took place in 2012 at a restaurant in Brooklyn. The format for these gatherings was quite simple: invite a group of POC artists to share a meal; serve up some comfort food (Alba favors chicken and rice dishes, family style); and lead with a discussion topic centered on race, or other issues that intersect with it.
What emerged from those early talks, however, came as a surprise to Alba, so much so that she felt compelled to continue organizing more iterations in different venues. The group would visit a restaurant, order takeout at an artist’s apartment, or stage a home-cooked meal at which Alba would serve her signature mini-empanadas. “It was quite eye-opening for me,” she says. “There was a lot of division among folks of color. There was also division among African-Americans and Latinos.” Advertisement
Alba, who is 55 and has a multimedia art practice, identifies as both Black and Latino. She has roots in the Dominican Republic but culturally feels more aligned with African-American communities (“I prefer to listen to hip-hop than merengue,” she quips). And from the genesis of her supper club, she felt strongly that the dinners should welcome all people of color.
This inclusive emphasis is grounded in Alba’s commitment to finding commonalities between distinct communities, to “equalize those differences,” as she says. “Granted, the history of slavery is terrible here, but if we look at the history of, say, South Asians, they were oppressed by the British for a long, long time. People forget there were slaves in Latin America. And indigenous people [in the Americas] were oppressed. Land was taken away; they were killed by diseases.”
One supper discussion revolved around the idea that blackness tends to be seen through the lens of the United States. “The U.S. has a very imperialist mindset, and Britain does too,” says Alba. “Everything that we do feels bigger than everything else. That applies to race discussions sometimes.”
Alba notes that this was one of several suppers at which tension arose, with some feeling that the conversation represented an attack on African-Americans. “One artist felt that it was the Civil Rights movement in this country that had empowered people [everywhere] to push against the existing norms,” she says.
Alba admits that she was a little worried that some participants at that particular dinner would never speak to her again. But she is not one to avoid difficult subjects, or potential conflict. “My friends will tell you, sometimes I’m a little too idealistic,” she says with a smile. 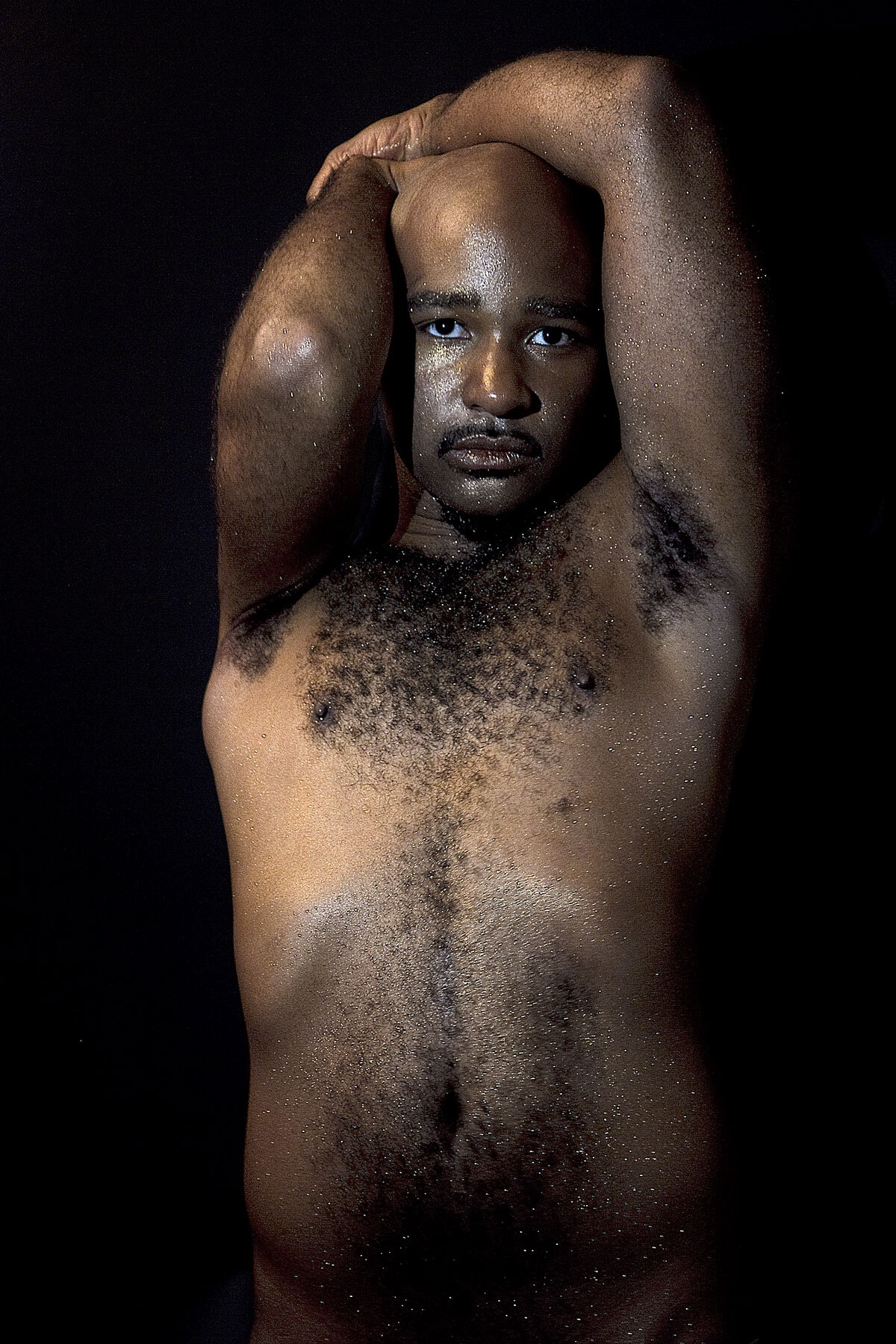 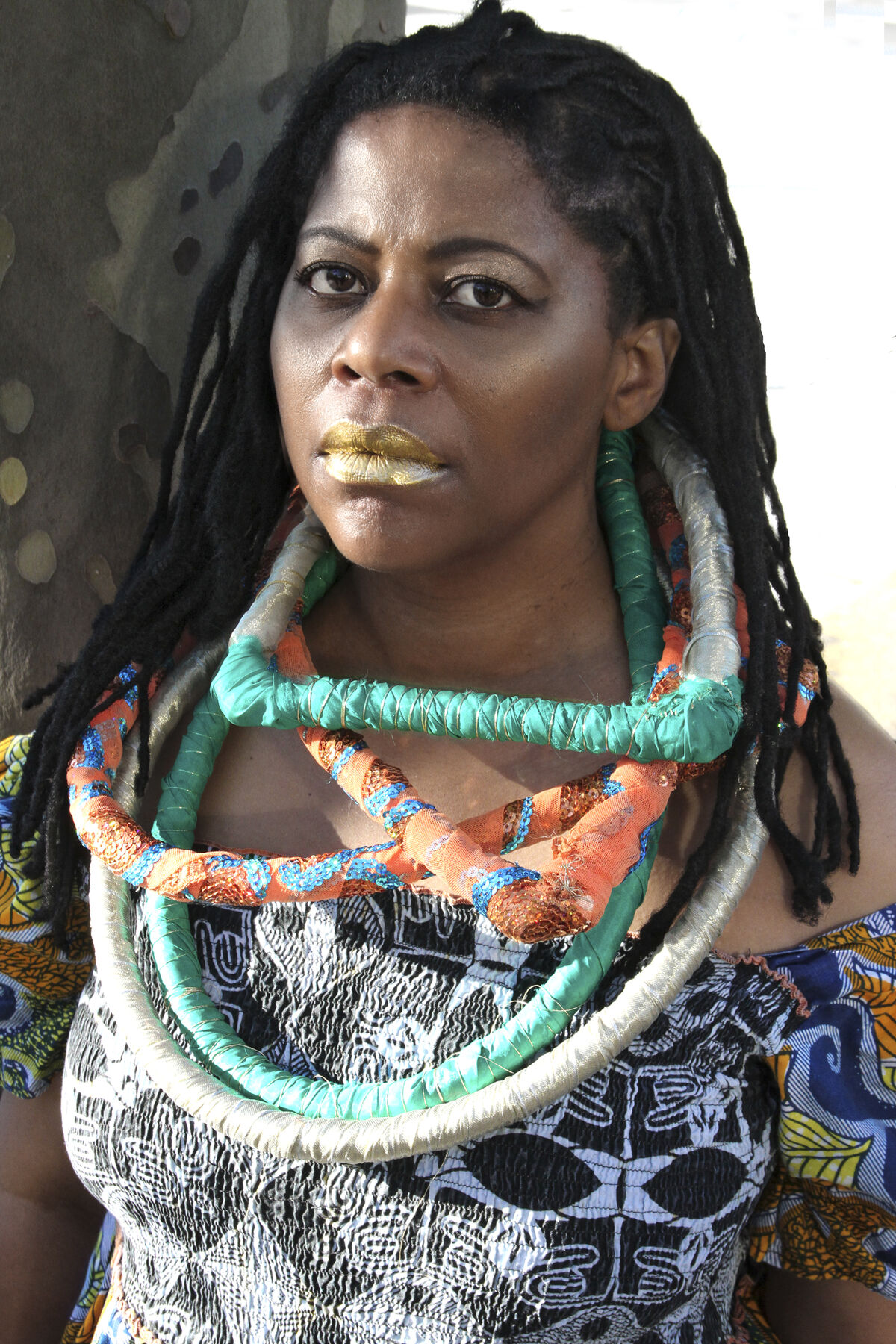 And while there have been some uncomfortable moments around the dinner table, Alba wells up a bit talking about the more poignant or emotional gatherings that she’s shared with her guests. Dinners that followed the deaths of Eric Garner, Michael Brown, and Tamir Rice, and the mass shooting in Orlando, took on particular urgency as the conversations grew more political.
“I think we all cried at that dinner,” she says of the supper that took place shortly after the murders of 49 people in a gay nightclub in Florida in 2016. “People understood that safety wasn’t available to anyone at that table.”
A dinner at the end of 2014, following the police killings of Garner, Brown, and Rice, found participants especially fired up. The group ate together in December, shortly after Art Basel Miami Beach. “People just couldn’t understand how you could celebrate the art fair, and then protest,” says Alba. “I felt the same with Trayvon Martin; that happened in Florida, and people still went to Art Basel.”
More recently, the highly charged conversations surrounding
Dana Schutz
’s painting of Emmett Till lying in his casket, a flashpoint of the Whitney Biennial, surfaced at one of Alba’s suppers and revealed a generational divide. “Younger folks felt that it should have been taken down, which I found very interesting,” says Alba. “A lot of people felt it should be discussed and critiqued heavily, but it should not be taken down—which is my position. I don’t like [the painting], but that history is not just a history for black people, that’s a history for everyone in this country.” 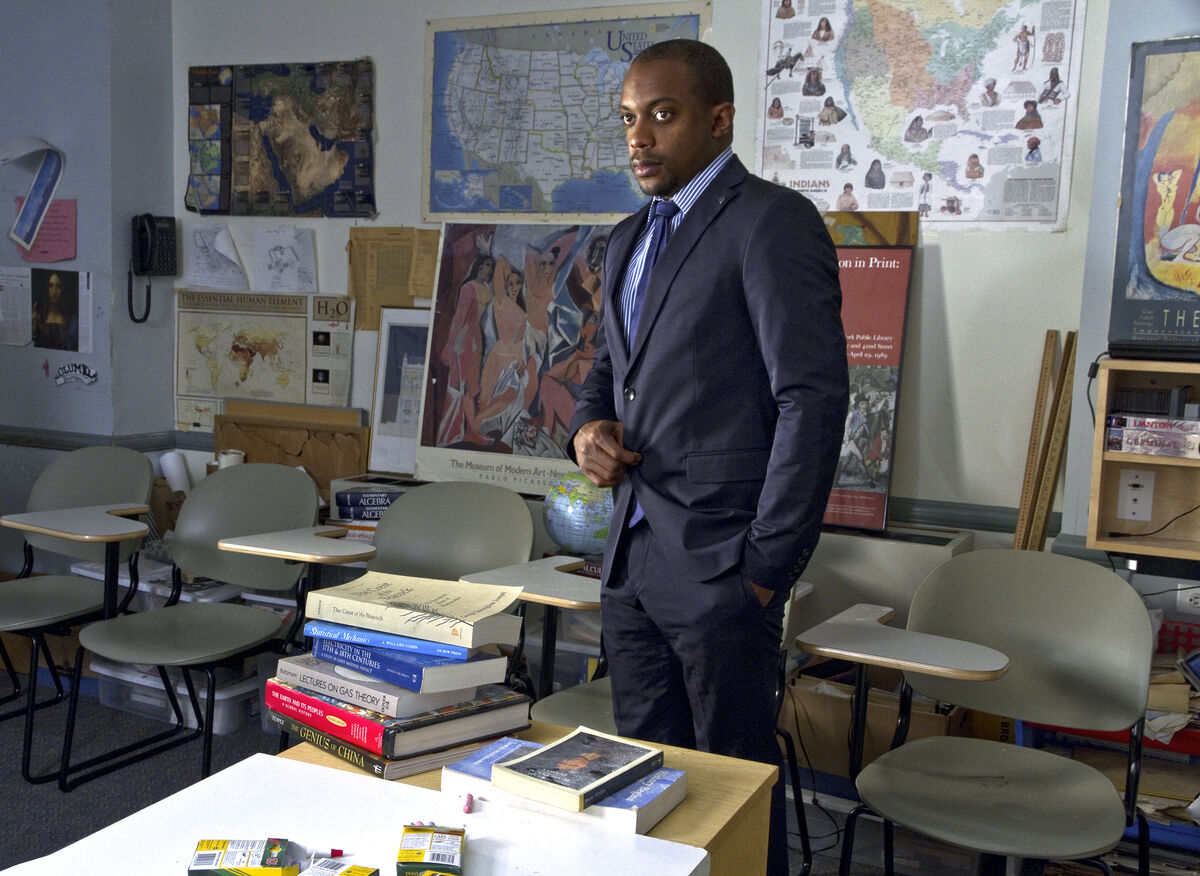 The past five years of suppers have made Alba more sensitive to and aware of different viewpoints, she says. “As artists, we do need to be more sensitive, because we’re putting stuff out into the world. I feel like I was very naïve for a while. Now, to use the contemporary language, I’m woke,” she says.
She hopes that when her book is eventually published, the dinner transcripts will have a similar impact on others. And the images—or “beauty shots,” as she thinks of them—will hopefully empower viewers, particularly women. She points to her portrait of
Juana Valdes
, whom she captured looking “so powerful” in a dress with a 10-foot train, and to her nude portrait of
Mickalene Thomas
, as “The Female Gaze,” portrayed as a
Sandro Botticelli
-Venus-like statue on a beach in Fire Island.
“With Mickalene Thomas, she portrays these women that are so strong and über-feminine and beautiful, with glitter and sparkle,” Alba says. “Mickalene let me photograph her without any clothes, it was a beautiful day.”
“It’s about reimagining icons and perceptions of what is beautiful—and who is beautiful.”
Tess Thackara
Related Stories