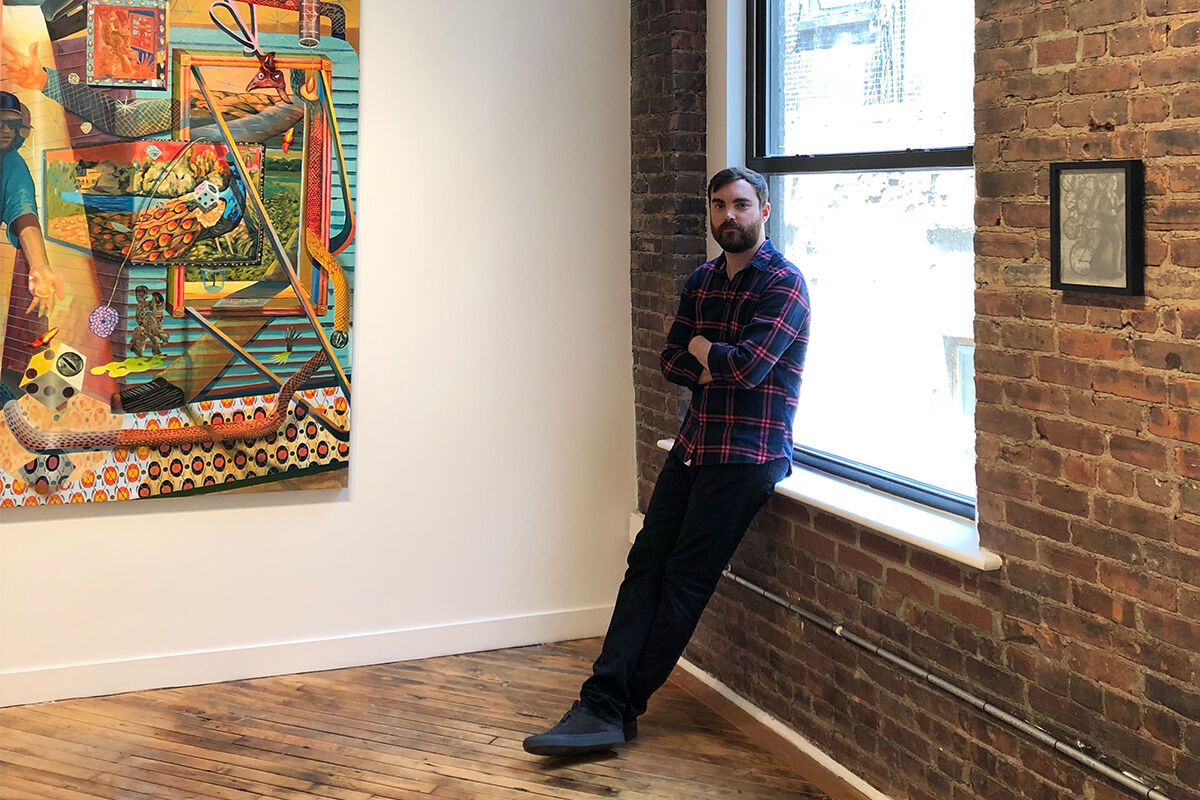 When former Sotheby’s specialist Charles Moffett was getting ready to open a gallery, he was close to signing a lease on a storefront on White Street in New York’s Tribeca, a place he said fit his image of “what I thought a gallery should look like.” But he found another listing for a space at 265 Canal Street, right in the middle of a bustling sector of Chinatown’s throbbing artery—a building that is home to Chinese travel agents, insurance salespeople, and import-export companies.
He went up a rickety elevator to the third floor, where, at the end of a winding hallway dotted with small offices, there was a giant space with big windows that could only be an art gallery.
“Everybody who comes here is like, ‘I thought I was in the wrong place,’ but I saw this place and I fell in love with it—the floors, the columns, the tin roof, the exposed brick,” Moffett said, sitting at a table in the gallery on a recent summer afternoon. “It kind of reminds me of the old SoHo.”
It’s not the path that Moffett was originally on. After a few years working his way up at Sotheby’s as one of the house’s rising stars and eventually becoming vice president and co-head of its post-war and contemporary day sales, he left the auction house in 2017, worked privately as an advisor for a few months, and, this past January, started looking for spaces where he could have a brick-and-mortar space. In May, he opened Charles Moffett Gallery in Chinatown, representing young and underappreciated artists selling work in the $2,000 to $5,000 range, but also for as little as $400. It’s a dicey move in an economic environment that has proved increasingly hostile to new and young galleries—UBS and Art Basel’s The Art Market | 2018 report noted that fewer than 50 galleries opened in 2017, down from 275 a decade ago. But it’s a step that Moffett, who has dreamed of having his own gallery since he was a college student, said was irresistible. 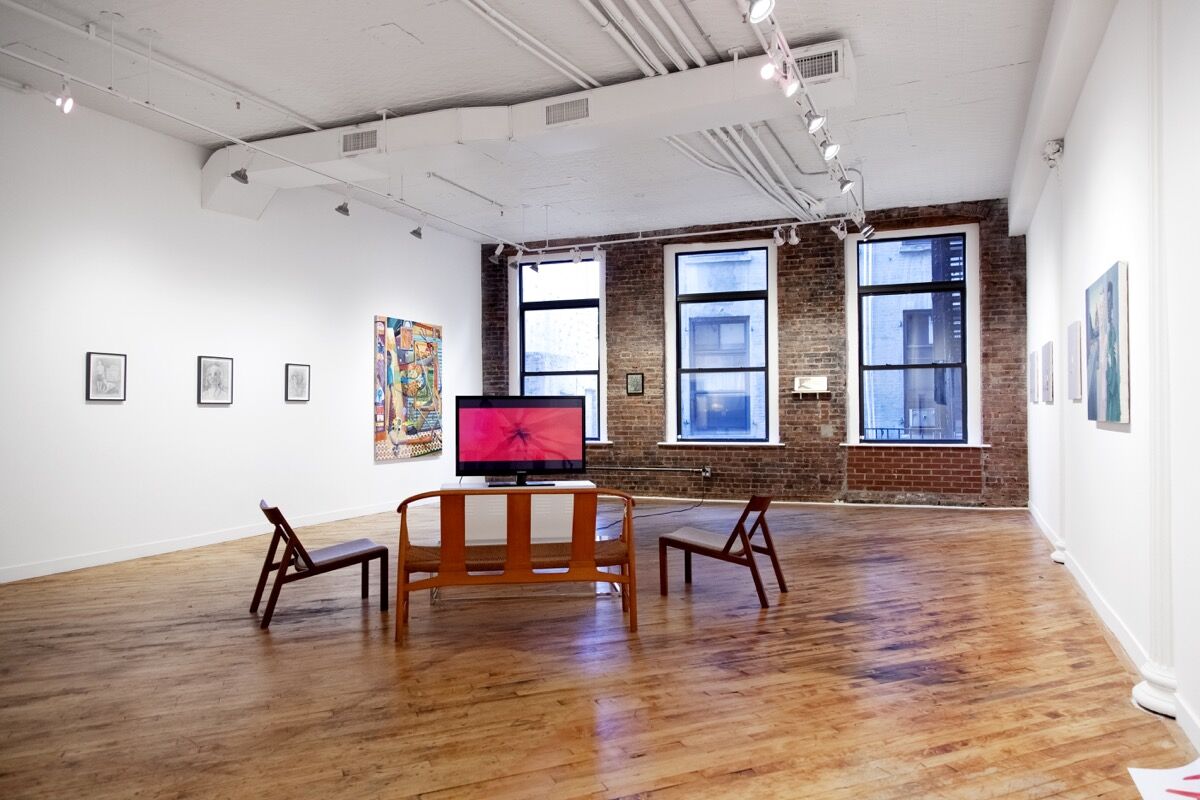 “I kept having this itch for the primary market, working directly with artists and doing shows,” he said, sitting beside the attractively aged brickwork.
How can Moffett succeed where others have failed? He realizes that the primary market alone can’t sustain a young gallery fighting against rising rent prices in New York, plus the pricey reliance on art fairs, so he’s conducting secondary deals to keep the gallery afloat.
He will continue to work with the clients he met while consigning work and sourcing bids for the contemporary day sales he helped run at Sotheby’s, earning commission on high-value deals and through reselling inventory at markups in order to tip the operation toward profitability. He spelled out a simple business model that he admitted somebody with a financial background would probably “have a heart attack hearing”: sell enough work to cover rent and living expenses, and cover extra expenditures with the secondary market deals.
“I’m lucky to have a background that enables me to do that to some extent, having worked at Sotheby’s, but I don’t want that to be the driving force,” he said. “I’m applying to my first art fair, and I wouldn’t be able to do that if I hadn’t executed a few secondary market sales. But the primary market is the leading force behind this.” 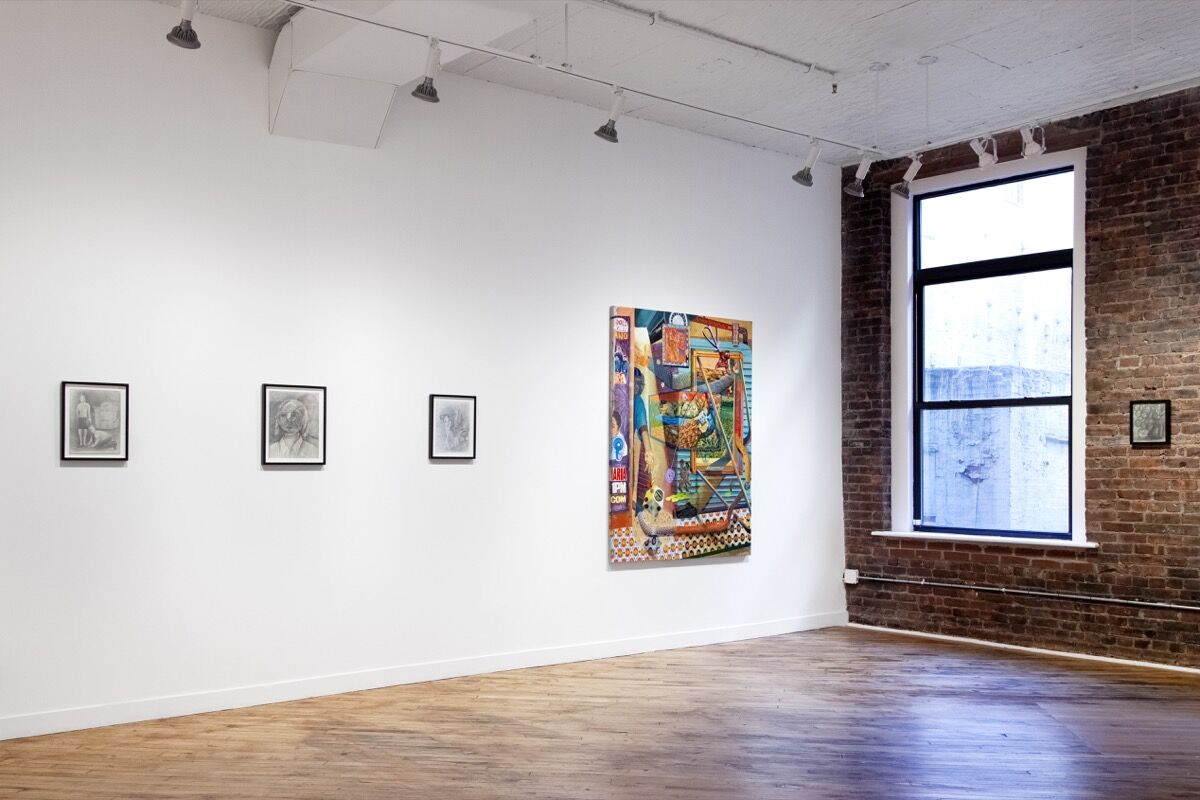 Advertisement
He acknowledged that this model isn’t replicable for just anyone who wants to open a gallery; his specific work history has given him key collector and dealer contacts, with whom he can still do business.
Moffett worked for Zabriskie Gallery and KCM Fine Arts before graduating from the California College of the Arts with a master’s degree in curatorial practice, and then went to Sotheby’s as a specialist in its contemporary department. In some ways, he was following in the footsteps of his father, Charles S. Moffett, the Impressionist and modern art vice chairman who was on the phone with Leon Black when the billionaire bought an 1895 version of
Edvard Munch
’s The Scream for $119.9 million in 2012, then the most expensive work ever sold at auction.
The prices of work at Moffett Junior’s gallery will not come close to those heights, nor will they be as expensive as some lots in the day sales he used to run at Sotheby’s. When planning the first show, Moffett called
Lily Stockman
, an artist based in Los Angeles and Joshua Tree who paints lush abstractions that are steeped in her study of Buddhist Thangka painting and Indian miniature painting. Moffett has known the artist for the better part of the decade, and said that the timing was right for her to have another solo show, as it had been two years since there was an exhibition of new work, at Gavlak in Los Angeles. He told her to get work together for a new solo show—even though he didn’t have a space yet.
“I told her: ‘It doesn’t matter if we’re doing it in a parking lot in Queens somewhere, we’re doing a show,’” he said.
It has become something of a trend for auction bigwigs to leave for galleries, but they often go to shops that focus on secondary market power plays, places that usually don’t show new work by young artists, or do so on a nominal basis while building up the secondary operation in back offices. Unlike his former auction world colleagues who have defected, Moffett was now focusing his efforts on fresh-from-the-studio work, all at low price points. 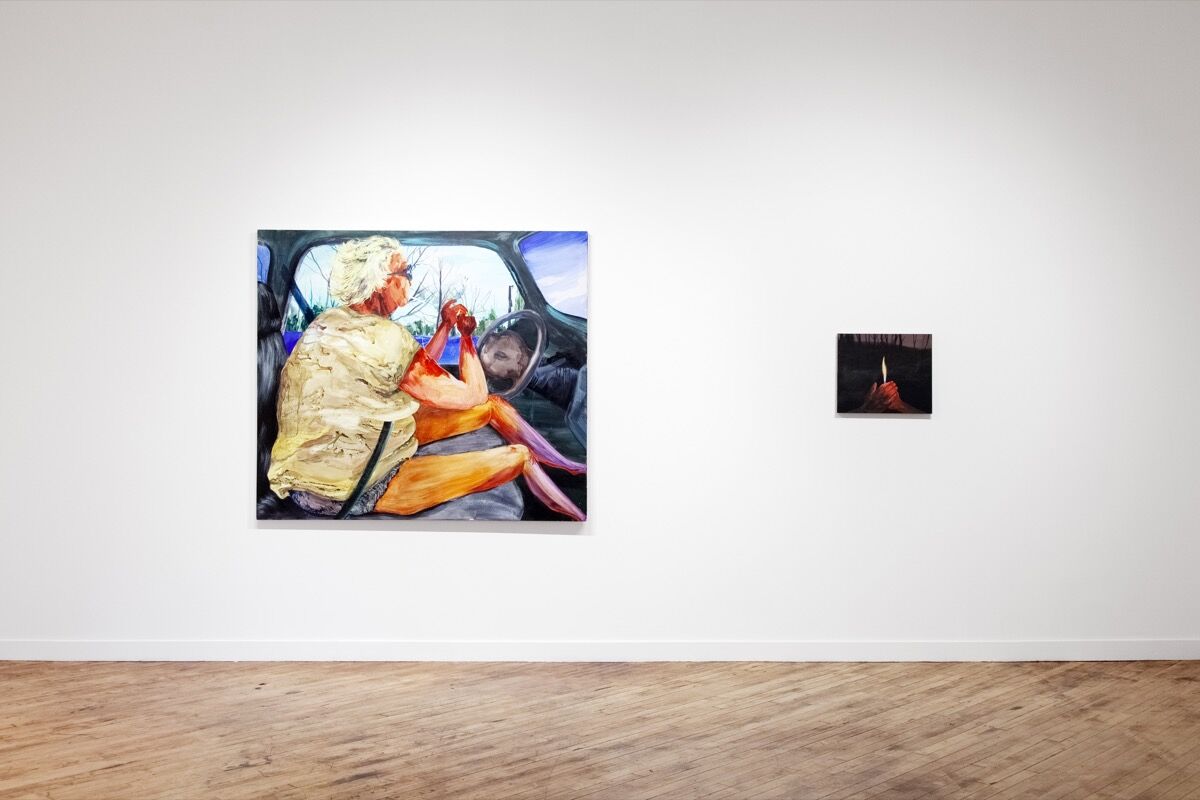 “Some people asked me: ‘Was it strange to go from selling these high-value works to [works by] younger artists?’ I don’t think it is, but it is a bit different of a path,” he said. “A lot of my colleagues move to big galleries and deal with high-value works.”
At one point in our conversation, the artist Christopher Rivera walked in holding a box of work for the group show that he’s curating at the space, “Alleviators,” which is similar to the projects Rivera stages at Embajada, the gallery in San Juan, Puerto Rico, which he runs with his girlfriend, Manuela Paz, who’s a director at Independent Curators International. “Alleviators” opens Tuesday, and already installed last Thursday was Satanas anda por todos lados, pues cuídate guey (2018), a virtuosic painting by Jose de Jesus Rodriguez that shows a man shooting dice amid an exploding surrealistic alley; there was also a gripping painting by
Maggie Ellis
, The Long Haul (2017), showing an overweight woman lighting a cigarette in her car. Rivera was given carte blanche to select the artists and works, Moffett said.
“I trust him implicitly—he’s given me my only tattoo, so I trust him probably more than I should,” Moffett said, laughing. “We were just talking one night, he suggested we do a show, and now he’s bringing in a lot of artists who have never shown in New York before.”
Moffett is giving himself at least two years to play in this space—he’s signed a two-year lease, and plans to assemble a roster of artists. He hopes that his example will inspire more people to set up shop at a gallery and develop the careers of emerging artists. 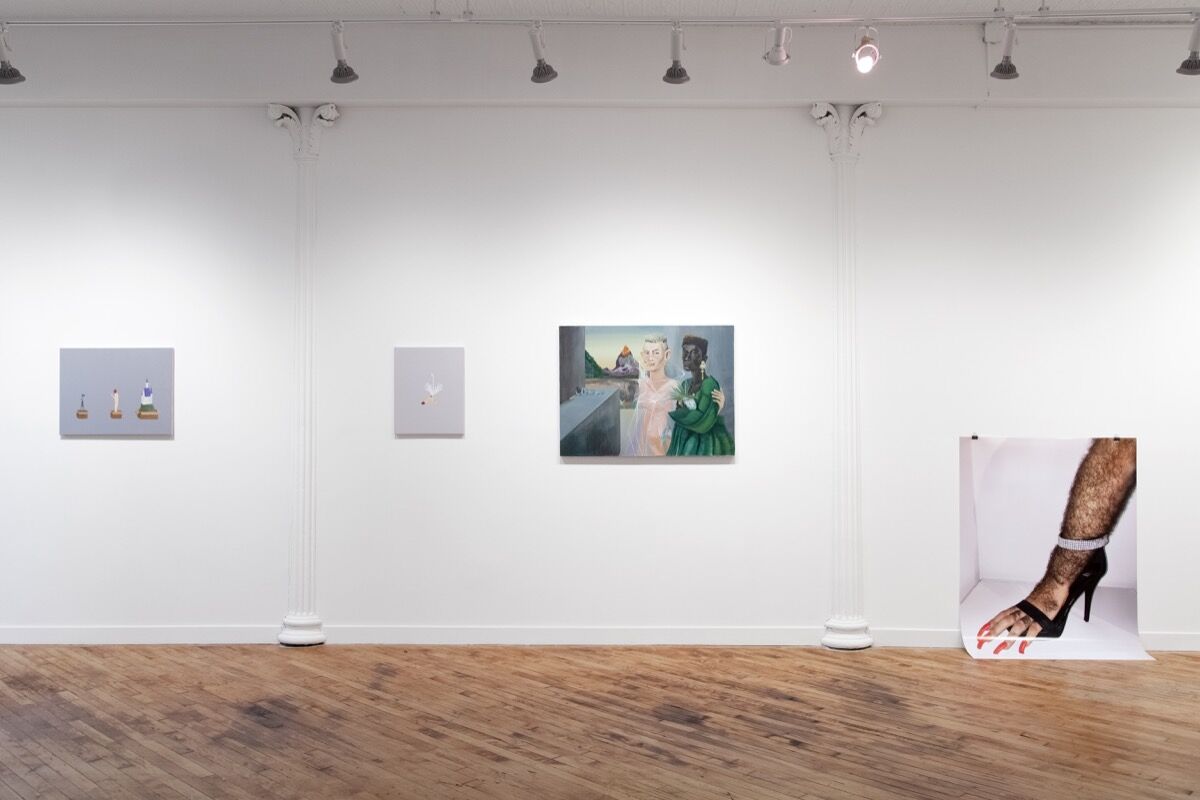 Yet he admitted that, even if he sells out a show, the profits won’t quite be enough to cover the two months of rent that he’ll pay during the exhibition’s run. Add to that the costs associated with art fairs—booth prices, travel and accomodation, art shipping—and it becomes tough to imagine that opening a gallery is, from a business standpoint, anything apart from a suicide mission, destined to fail.
Despite the risks, he would tell prospective gallery owners it’s worth it.
“If somebody were to come to me and tell me they were thinking about opening a gallery, I would say: ‘Don’t hesitate, do it now,’” he said. “The auction houses will always be there, bigger galleries will always be there; you can always have a fallback.”
And he said, on a personal level, he thought about his father who passed away in 2015, one year after he left Sotheby’s to be a private art advisor.
“I really enjoyed my time at Sotheby’s and there are days when I still miss it, but I knew that I always wanted to do this, and if I kept putting it off, I was never going to do it,” he said. “I watched my father, who worked at an auction house for 17 years, finally leave, and he didn’t get to enjoy [his life post-Sotheby’s] as for as long as he could have or would have. Granted, I’m not in my 60s, but I think the same rules apply.”
Nate Freeman
Related Stories