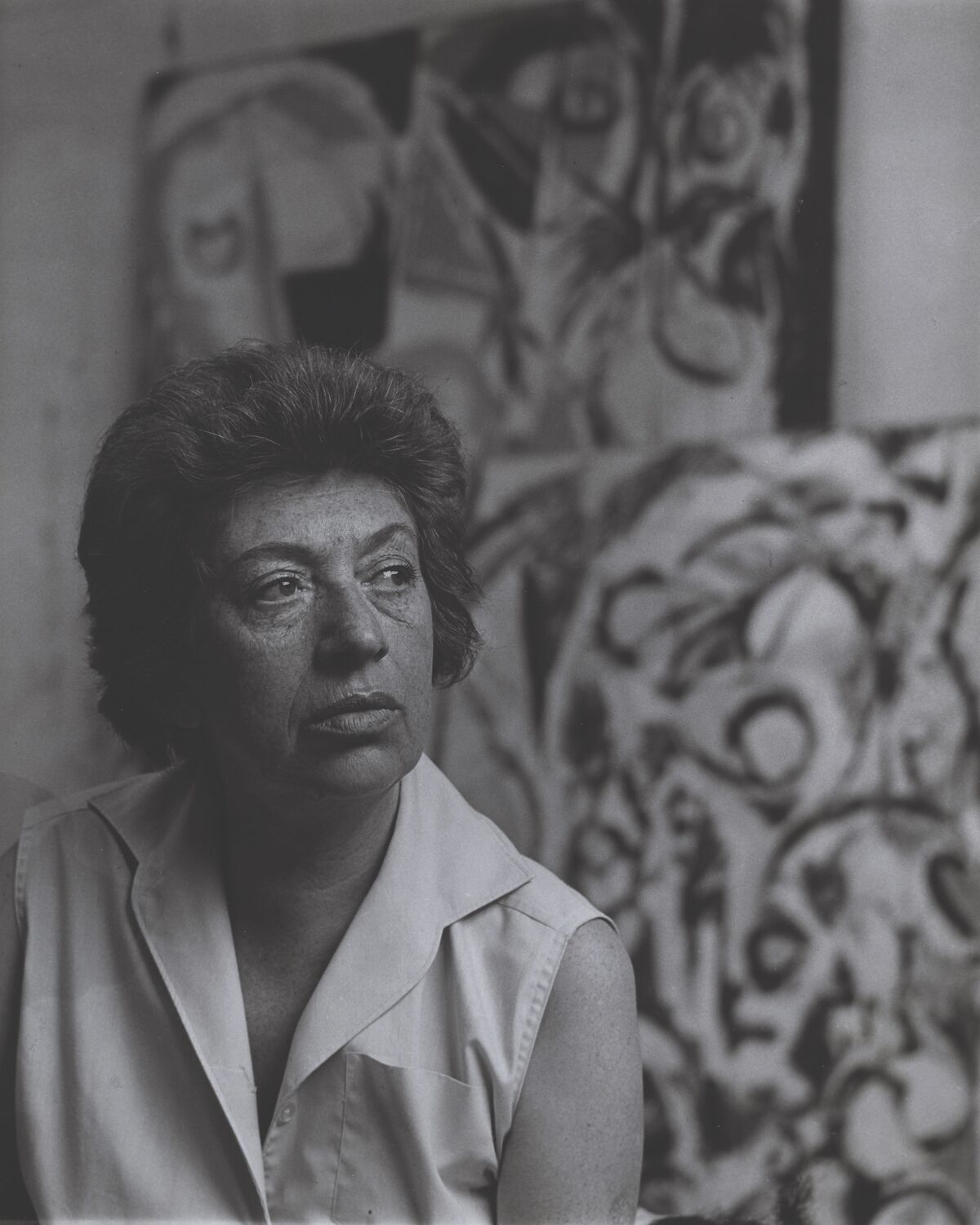 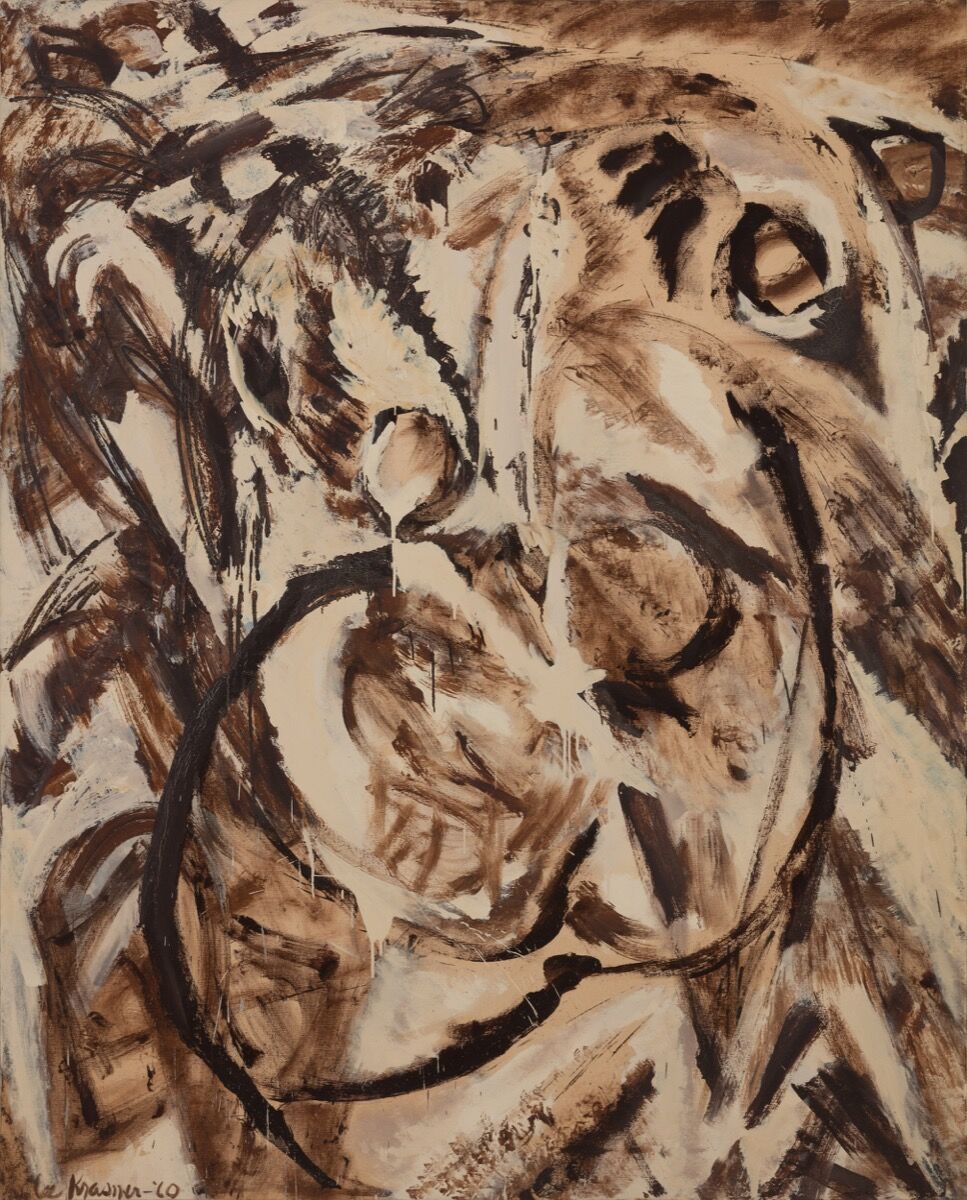 “It’s too bad that women’s liberation didn’t occur 30 years earlier in my life,” the
Abstract Expressionist
painter
Lee Krasner
told Artforum in 1973. “I couldn’t run out and do a one-woman job on the sexist aspects of the art world, continue my painting, and stay in the role I was in as Mrs. Pollock.”
Known for her fiercely independent streak, Krasner was one of the few women to infiltrate the
New York School
in the 1940s and ’50s. But more often than not, her career took a backseat to that of her husband, the most famous of the Abstract Expressionists,
Jackson Pollock
. While her marriage gave her inside access to art-world powers that might have otherwise been off-limits, she was a painter in her own right and even more entrenched in the avant-garde art scene than Pollock was when they first began a relationship in the early ’40s.
Once married, though, Krasner devoted herself to the consuming role of caretaker, promoter, and artistic champion to the notoriously tempestuous, self-destructive Pollock. She did this, of course, while carving out her own place in art history and cranking out a lifetime of collages and canvases that easily rival the best of some of her AbEx compatriots.
It’s hard to speculate about the different turns her career might have taken if women’s lib had come earlier in the 20th century, but Krasner’s “Umber Paintings,” a series of powerful, gestural works currently on view at Paul Kasmin Gallery, indicate how her work evolved after she was in some sense liberated—albeit tragically—from her fraught marriage. 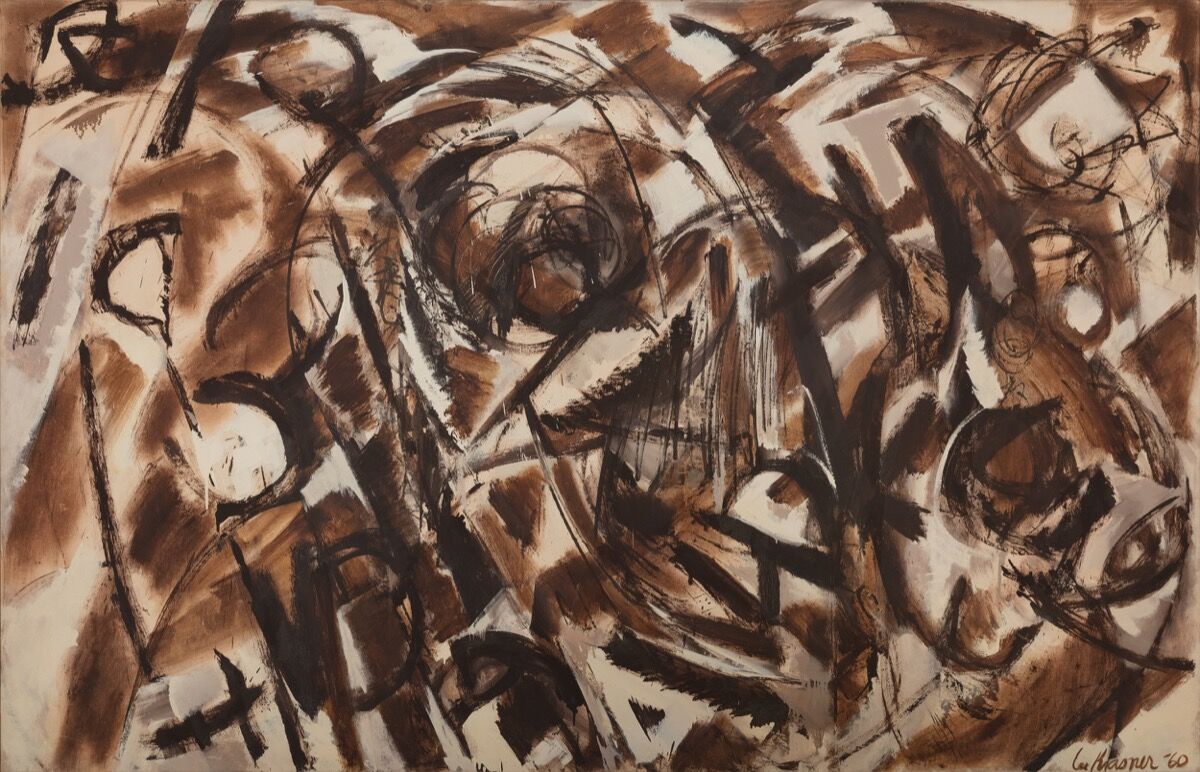 Made between 1959 and ’62, following Pollock’s death in a fatal car crash in 1956 (with his lover by his side), these all-over abstractions—called “umber” for their restricted palette of browns, creams, and whites—are neutral only in tone. Covered in knots of dense curves and slashes that might spring loose at any moment, they were once described by the critic Amei Wallach as having the “impact of a hurricane.”
Undoubtedly adding to their impact is their size, which is larger than many of Krasner’s earlier works. After Pollock’s death, she stopped painting in her small bedroom and moved into his studio in the barn where they lived in Long Island. But around this time she also bought her own apartment in Manhattan, where many of the 24 works in the series were made. (Kasmin, which began representing Krasner’s estate last year, is showing five of them. Eight are held by museums.)
The somber earth tones (not to mention the denser, more aggressive marks) certainly reflect a change in mood from the emerald greens and fuchsias she’d been using right before and after Pollock’s accident. But this choice of palette was also a matter of pragmatism. Krasner had chronic insomnia—not surprising, given that she was recovering from the death of her mother, too, and dealing with the renewed attention in Pollock’s work that followed his passing. Advertisement
As the heir and executor of his estate, she was tasked with managing his legacy, which loomed large as she tried to emerge from his shadow. Up at night, she turned to painting, and the artificial light required an adjustment of color. As she explained to her friend, the poet Richard Howard, in 1979:
“Let me say that when I painted a good part of these things, I was going down deep into something which wasn’t easy or pleasant. In fact, I painted a great many of them because I couldn’t sleep nights. I got tired of fighting insomnia and tried to paint instead. And I realized that if I was going to work at night, I would have to knock color out altogether, because I wouldn’t deal with color except in daylight.”
According to the Abstract Expressionist scholar David Anfam, the senior consulting curator at the Clyfford Still Museum in Denver, and curator of the Kasmin show, these paintings mark a significant “turning point” for the artist. “They manifest a degree of psychological intensity—through their emotive scale and fierce movement—that Lee Krasner had simply never quite attained before,” he says. “Here, she finally seems to have purged the remnants of
Cubist
organization that she had learned from
Hans Hofmann
and discovered her true self with unprecedented sureness.” 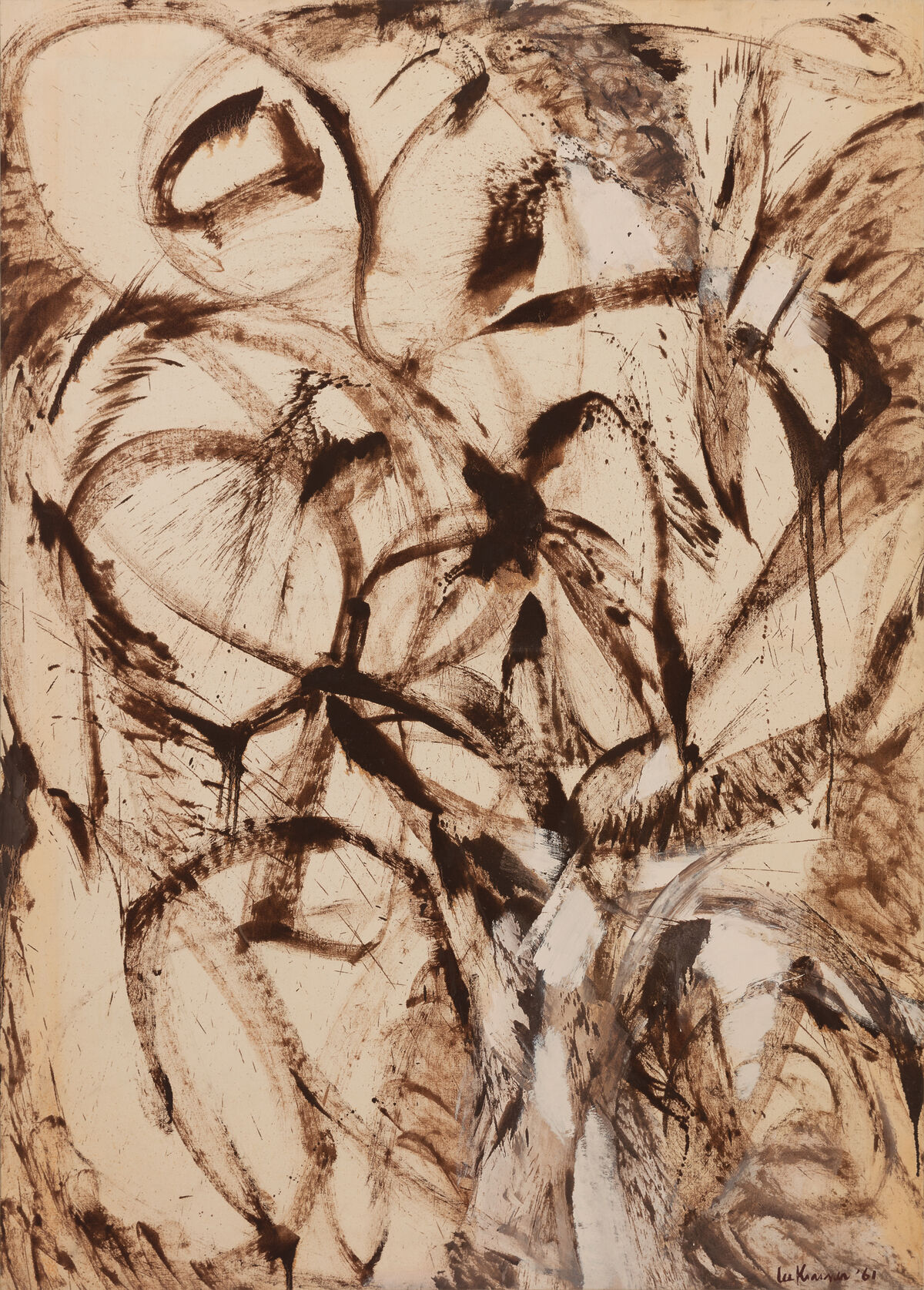 Sometimes referred to as her “Night Journeys” series, some of the works have names suggestive of an ominous sexual reckoning, like Fecundity and Seeded (both 1960). Others seem more indicative of ferocity, like Uncaged (1960), a raw tangle of agitated ovoid lines and drips. Assault on the Solar Plexus (1961), with its feathery marks on raw canvas, could be a nod to the more diluted, gentler
Color Field
painting, which, by the late 1950s, was eclipsing Abstract Expressionism as the language of choice for the avant-garde.
She was quick to recognize that her more expressionistic form of mark-making at that time, her spatters and drips, her loose brushwork and oozing swaths of thick, creamy paint, weren’t fashionable. “I wonder what it would be like to be swimming with everybody else instead of the other way,” she said of this work.
Meanwhile, critics zeroed in on her debt to Pollock. “People talked about how she was being influenced by Jackson from beyond the grave,” Howard said. Critic Clement Greenberg, for one, was not amused by the direction her painting had taken. In 1959, after planning to orchestrate a solo show at the gallery French & Company based on the vibrantly hued biomorphic shapes she’d been painting, Greenberg saw this new series and criticized it for looking back instead of forward. Krasner backed out of the show in defense of her new work. It’s easy to see why Pollock comes to mind. She was still mourning, after all, and the all-over splatters tucked beneath brushstrokes are hard to miss. But as Anfam points out, they tend to “exorcise Pollock’s ghost” more than resuscitate him. “Pollock’s influence is powerfully manifest in the umbers, but their sense of touch and facture is nevertheless highly distinctive—at once feathery, slashing, rhythmically judicious, thicket-like and yet strangely eloquent. In gendered terms, they synthesize ‘masculine’ and ‘feminine’ polarities,” he says.
He also points out the importance of Krasner’s ubiquitous arcs (in contrast to Pollock’s diagonals). “She makes the arc the generative structure of the whole series, as never before,” he continues. “Crudely stated, diagonals lead out and away and across, while ovoids are self-contained, and the arcs synthesize both directions, suggesting a union of centrifugal and centripetal forces, inside and outside.”
Standing before these daunting works, they do seem to both implode and explode. But it’s the sepia tones that are particularly intriguing. While there is nothing explicitly feminine about these works—if we’re talking gender stereotypes, their gestural brushwork is more aligned with the machismo of action painting—the palette is strangely womanly. These are the browns and buffs of makeup, hair dye, bleach, and pantyhose—tools a woman uses to conceal her natural state. But in these paintings, Krasner seems voluntarily raw and exposed, as though she’s magically turned her surfaces inside out and liberated herself from within.
Meredith Mendelsohn
Related Stories 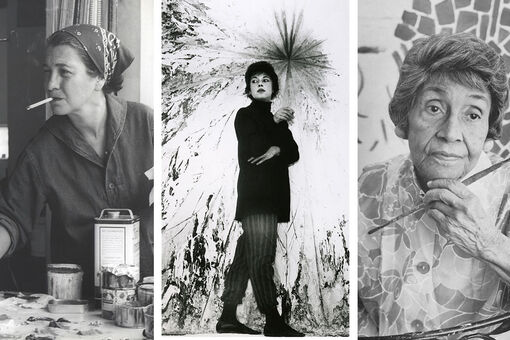