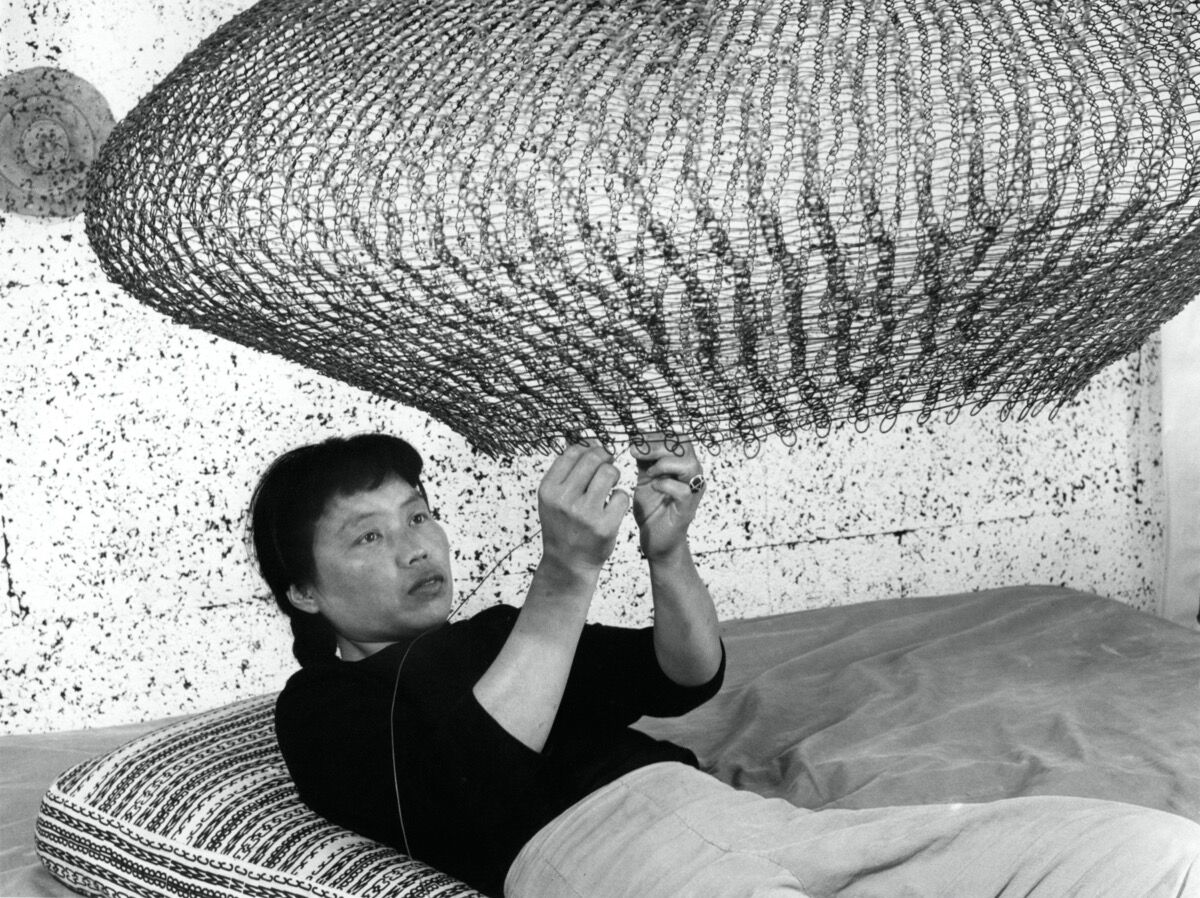 Despite some industry apprehension to put her work up for auction, in 2013, a massive
Ruth Asawa
sculpture, titled Untitled (S.108 Hanging, Six-Lobed, Multi-Layered Continuous Form Within a Form) (late 1960s), shattered its high estimate of $350,000, selling for a whopping $1.4 million at Christie’s. The 11-foot-tall amoeba-like hanging wire sculpture was sold in conjunction with the auction house’s exhibition “Ruth Asawa: Objects and Apparitions,” which was the first time the sculptor had received a solo show in New York City in over 50 years.
Everything She Touched: The Life of Ruth Asawa—a new biography of the artist’s life by Marilyn Chase—details how, lying on her deathbed a day after the record-breaking sale, the 87-year-old artist was accompanied by two of her daughters, Addie and Aiko, who broke the news to her by whispering in her ear, “Mama, you’re playing with the big boys now!” In the past decade, Asawa’s work has seen a near-meteoric rise in popularity. 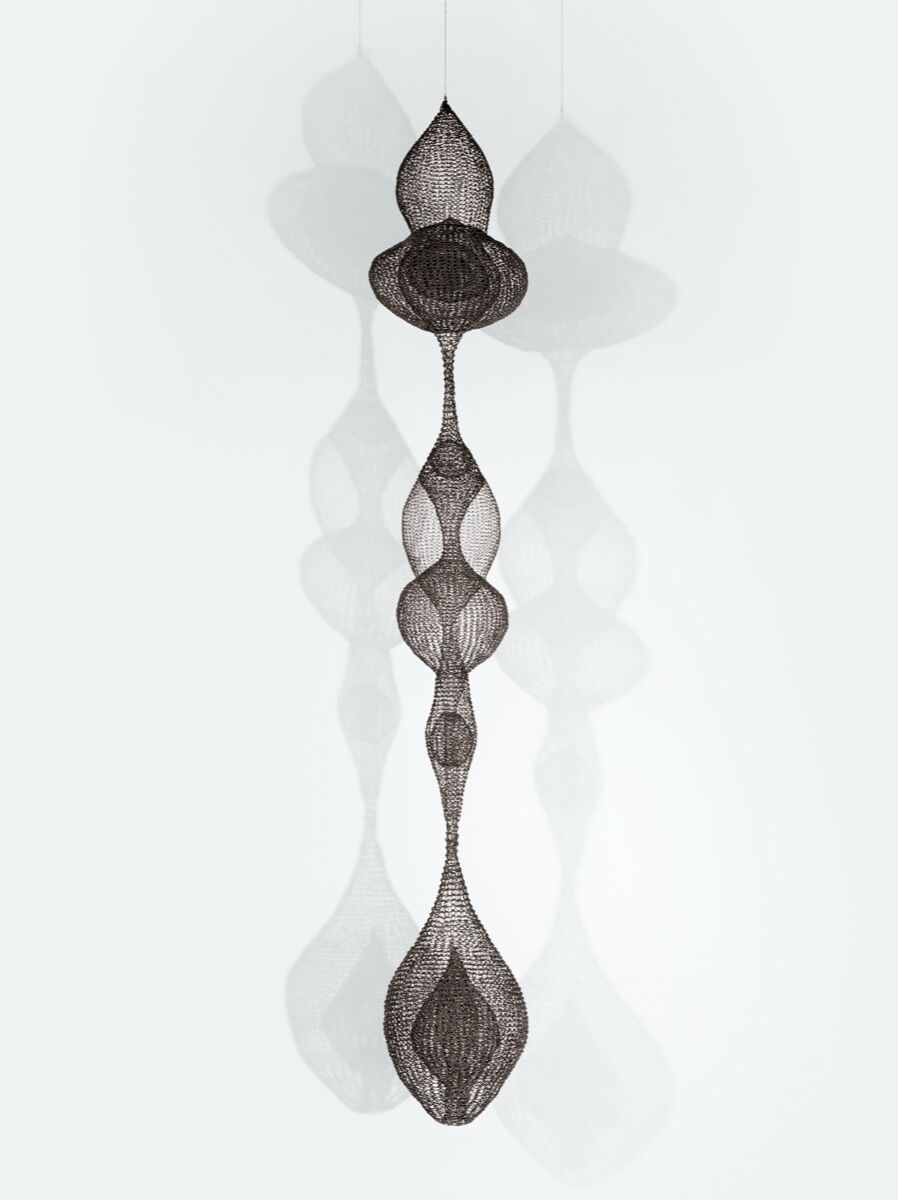 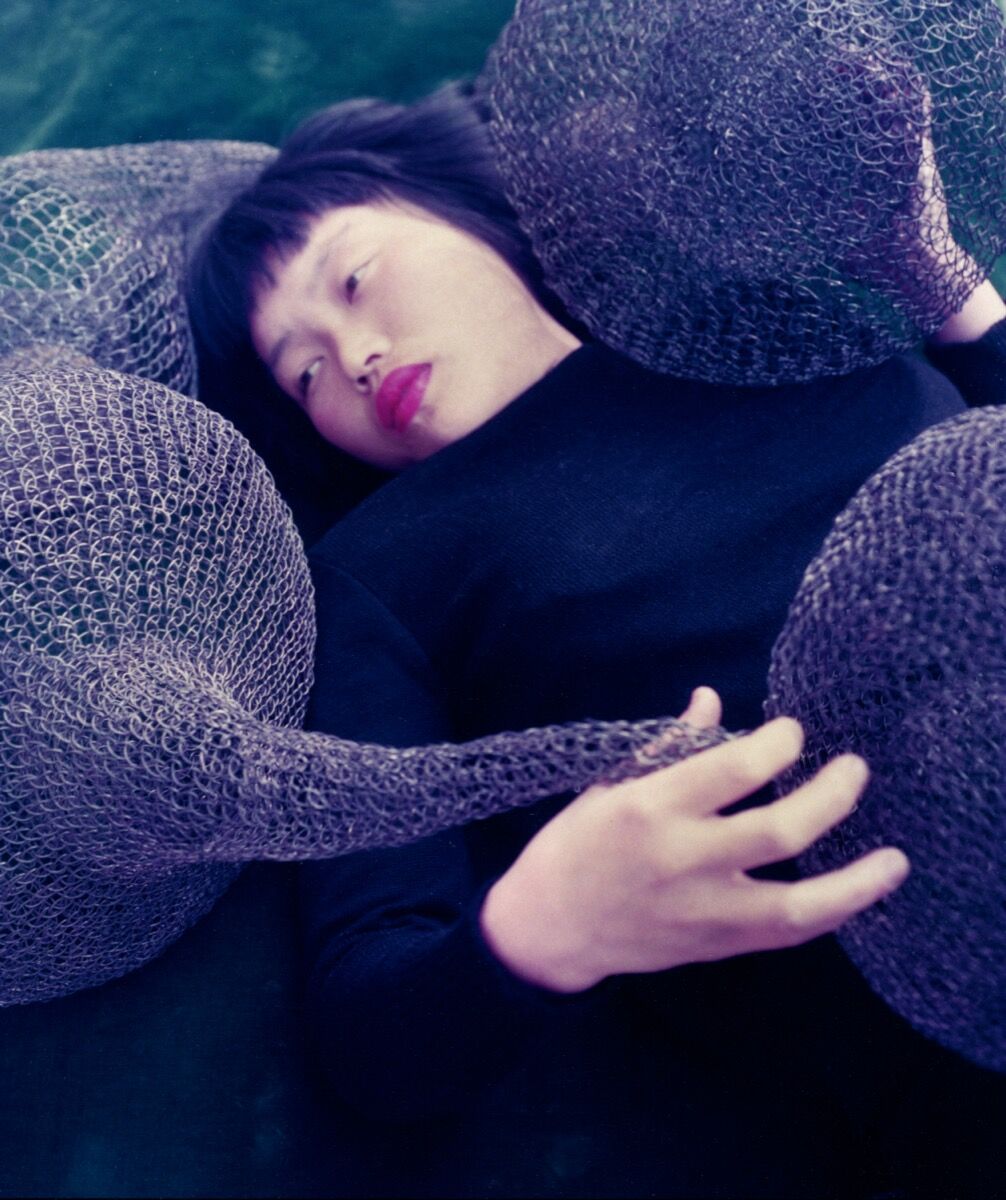 Asawa’s passion for art was sparked at a young age and spanned a lifetime. Best known for her large-scale, intricately woven sculptures and public art commissions, Asawa was a pillar of strength and a teacher to many. Her introduction to visual art would come during a fraught time in her life, but her resilient spirit refused to be defined by negative circumstances. Decades of dedication to her craft and a late-career chance encounter with David Zwirner director Jonathan Laib helped further cement Asawa’s legacy as one of the greatest American sculptors.
Asawa was born in Norwalk, California, in 1926 to first-generation Japanese immigrants Umakichi and Haru Asawa. She was the middle child of seven, all of whom worked endless hours on their family’s fruitful truck farm, in addition to attending school. Asawa would later recall important values that her mother would constantly repeat: gaman—endurance; nintai—patience; and enryo—restraint. When she wasn’t working on the farm, or doing school work, she was drawing. Asawa would draw popular cartoons like Little Orphan Annie and Blondie, dreaming of attending an art school one day. The brutal reality of politics, war, and enduring racial intolerance would put this dream on hold, but not forever. 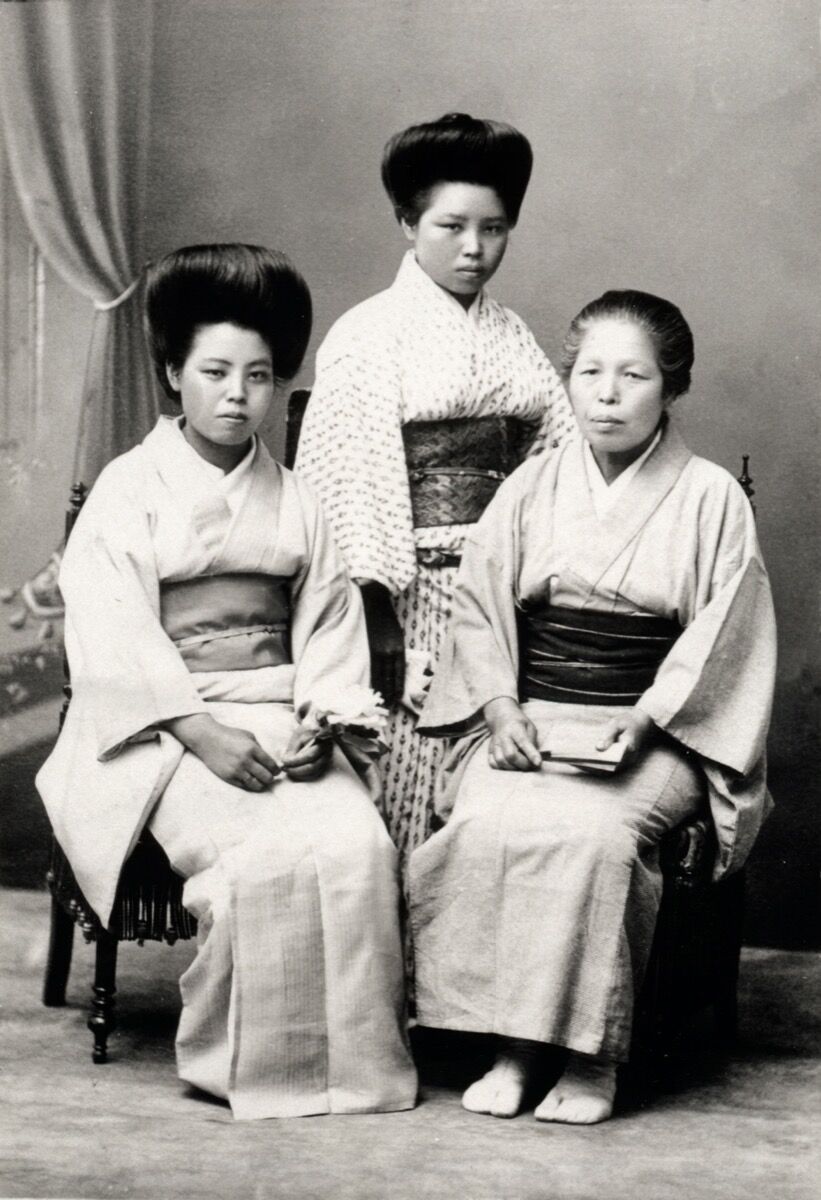 Portrait of Ruth Asawa’s mother, Haru Asawa (center), with her sister Ura (left) and her mother (right) in Japan. Courtesy of Estate of Ruth Asawa. 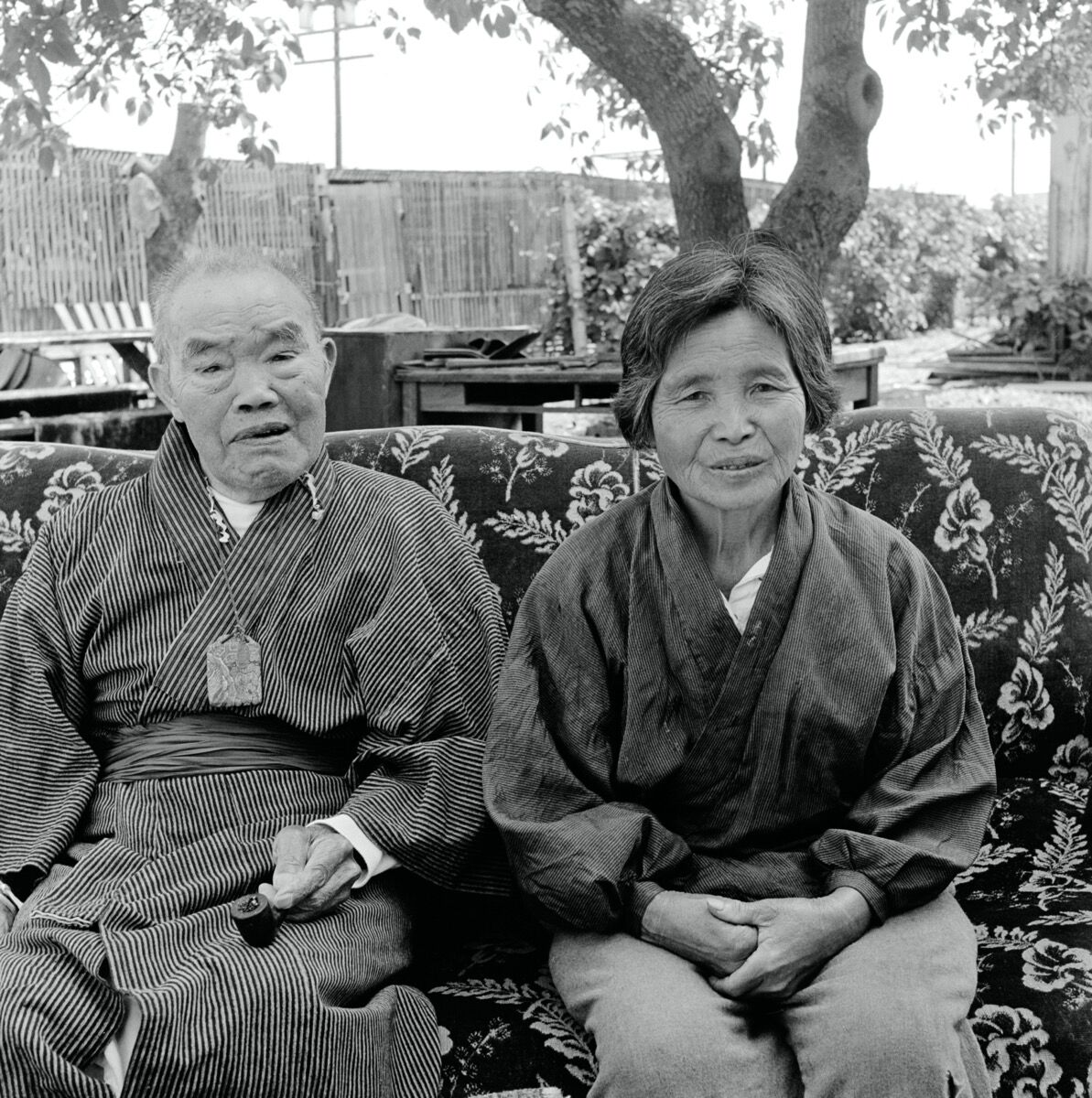 Advertisement
In a recent interview, Chase, the book’s author, emphasized Asawa’s innate ability to create something beautiful out of any situation. “What inspired me the most was her ability to turn swords into plowshares,” Chase said. “Every time life dealt her a blow, she turned it into something wonderful, something creative.”
In the spring of 1942, the Asawa family had their world turned completely upside down. In response to the bombing of Pearl Harbor and the emerging World War II, President Roosevelt ordered more than 100,000 Japanese-American citizens into internment camps. Separated for years from their father, the Asawa children and their mother were forced to adapt to the unimaginable conditions of living in a prison camp. In the midst of this violent situation, however, Asawa’s artistic tenacity flourished. It was during this time that she met three internees that worked as animators at Walt Disney prior to being pushed into internment. These professional artists taught classes to students in the camp and helped Asawa hone her own drawing skills. 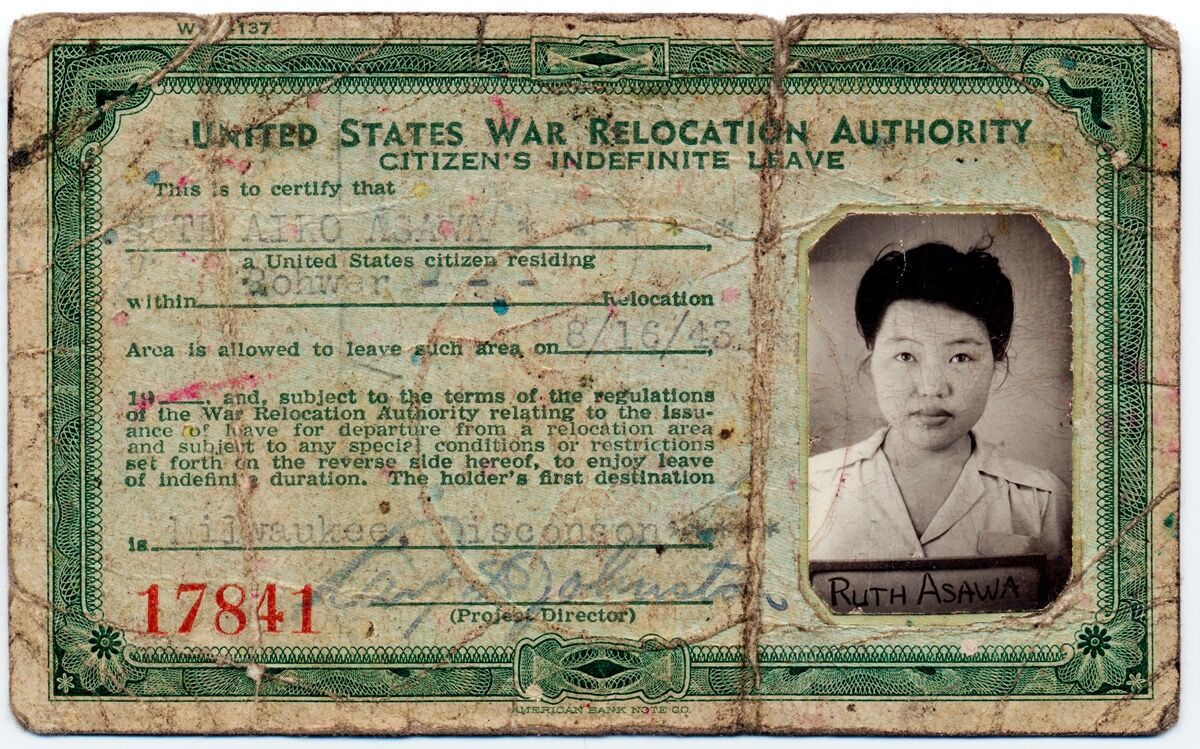 Asawa would live in internment camps for over a year before being granted a prewar release to attend college. Asawa set out for art-teaching school in Milwaukee, figuring that a career as an art teacher was more feasible than becoming an artist. While attending school, she worked various domestic jobs to help pay for her education. When Asawa returned to start her third year, she was prepared to begin student-teaching—part of the required coursework for her degree and teaching certification. However, she was told by the school that she would not be assigned a teaching job out of concern for her safety as a Japanese woman in Wisconsin. Without completing the necessary training, Asawa was unable to earn her degree and certification.
Eventually, Asawa found her way to the experimental art school
Black Mountain College
in North Carolina, joining several friends who were planning to move there from Milwaukee. It was in North Carolina that she met artists
Josef Albers
and
Merce Cunningham
, who became her mentors. Black Mountain College was also the site where Asawa would meet her lifelong partner, the architect Albert Lanier. 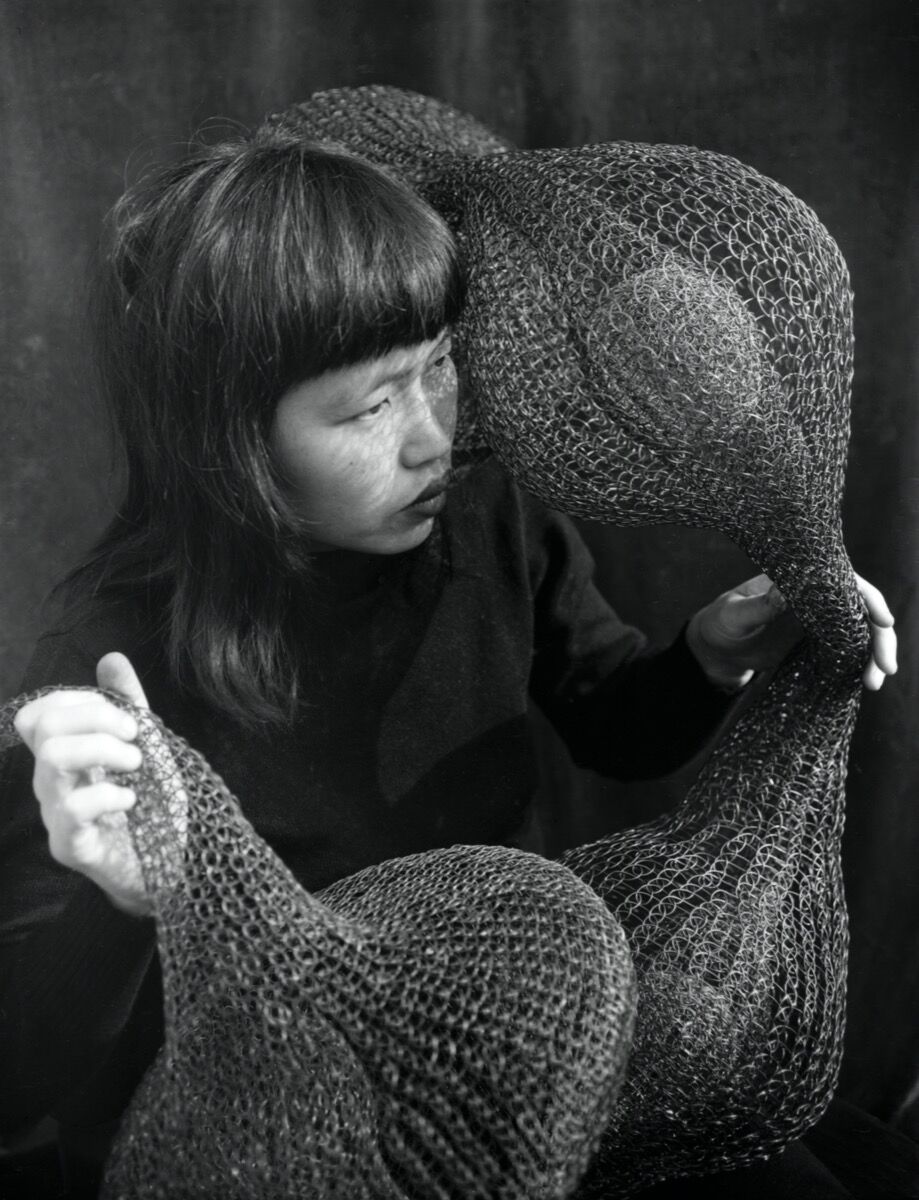 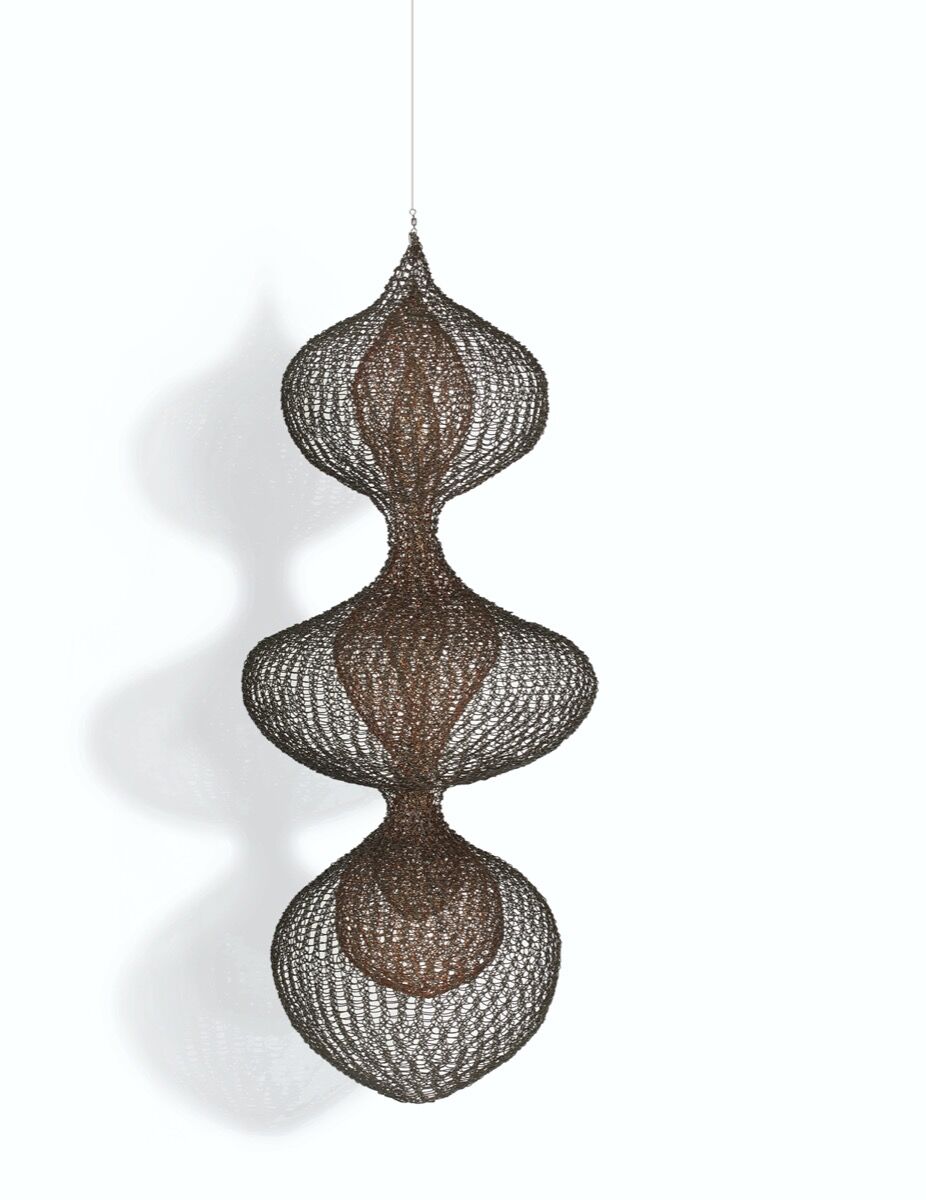 Asawa was first introduced to basket-weaving on a 1947 trip to Mexico—an encounter that would end up defining her lifelong sculptural practice weaving wire. As Chase writes in Everything She Touched, the discovery “enabled her to use wire to draw in three-dimensional space.” The elegant copper and brass sculpture Untitled (S.387, Hanging Three Separate Layers of Three-Lobed Forms) (ca. 1955) highlights Asawa’s meticulous technique. One of her smaller works, the piece features three delicate, curving woven layers. This piece obliterated the artist’s previous 2013 auction record last year, when it fetched just over $4 million at a Christie’s auction.
Asawa’s sculptures are instantly recognizable, their generous stature contrasted by nimble, web-like weaving and undulating curves. Chase explained the importance of wire throughout Asawa’s oeuvre. “She took wire, which was, in some sense, an instrument of her captivity, and then she transformed it into these shimmering mesh hangings of transcendent beauty,” Chase shared. 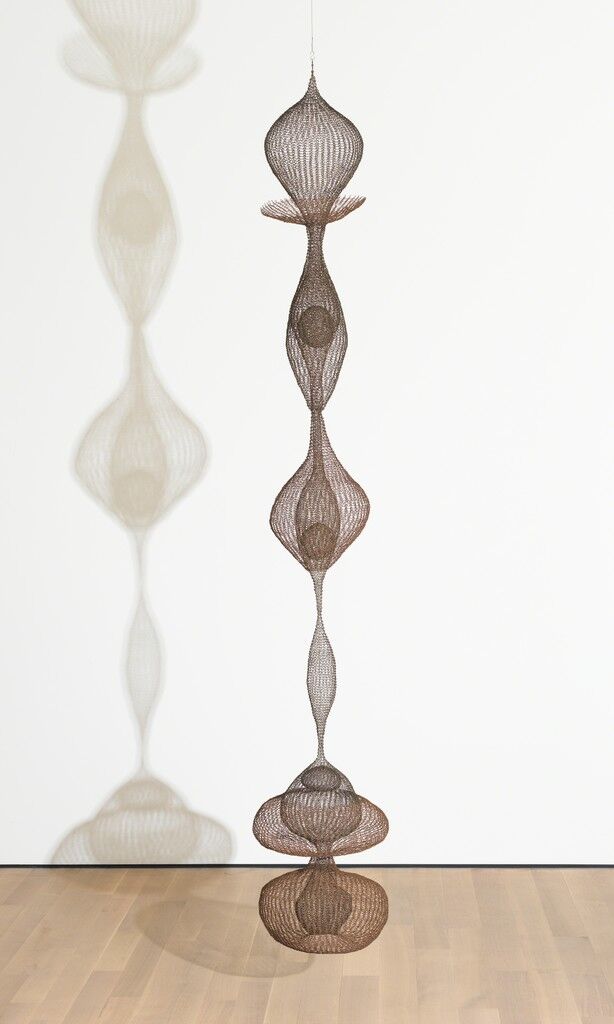 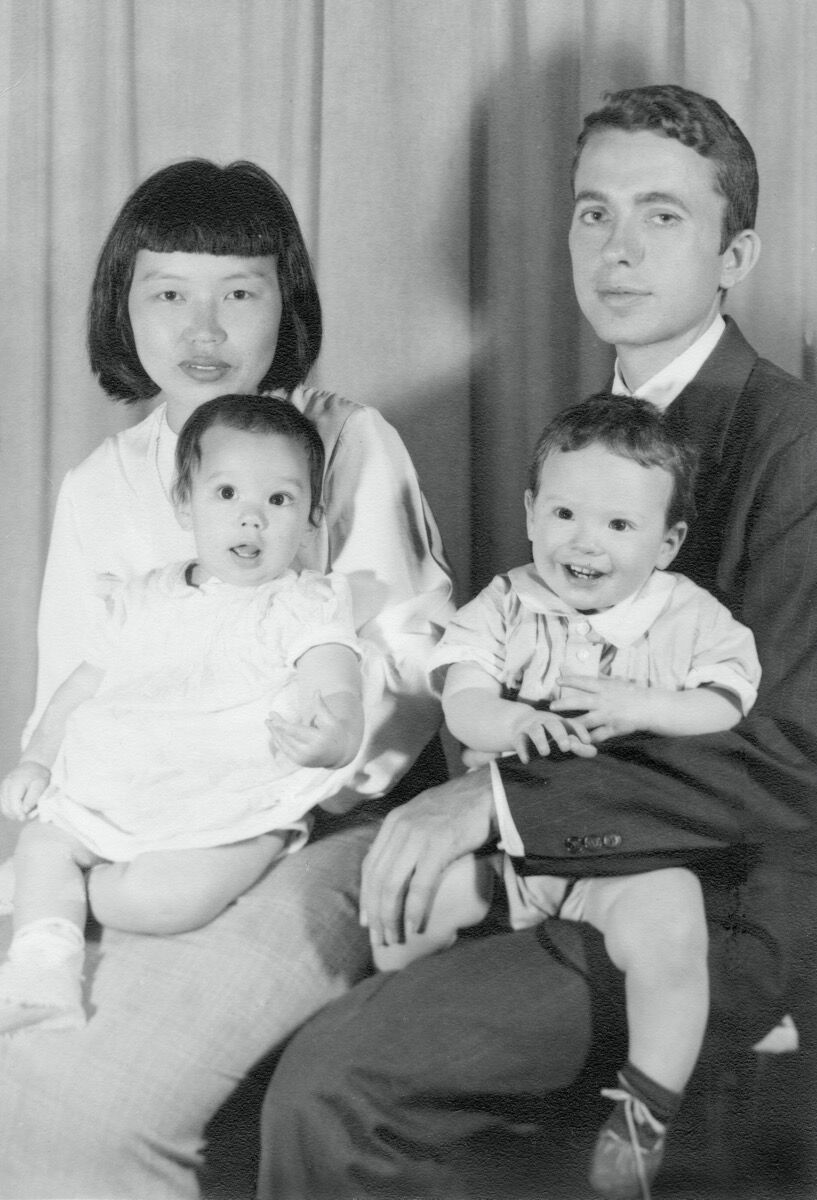 The years following Asawa’s time at Black Mountain College were full of action in more ways than one. In 1949, she and Lanier married and had their first child the following year, with plans to adopt another (they ultimately stopped at six). Later that decade, Asawa established an exclusive relationship with Peridot gallery in New York, which exposed her work to the city’s elite art buyers. For six years, she produced work to be sold at the gallery, while living in San Francisco and raising her family. During that time, she showed work at the San Francisco Museum of Art (what is now the San Francisco Museum of Modern Art) in 1954 and at the Biennial de Sao Paulo in 1955, and by the late 1950s, she was exhibiting works at New York’s Whitney Museum of American Art and the Museum of Modern Art. While Asawa’s time working with Peridot proved fruitful in some ways, she eventually ended their relationship due to some tense business dealings.
Despite this early success and a brief dalliance in the commercial industry designing work to be sold in department stores, Asawa and Lanier had trouble making a living off their artistic careers. She made friends with established artists including
Imogen Cunningham
and Paul Hassel, who urged her to continue making work. 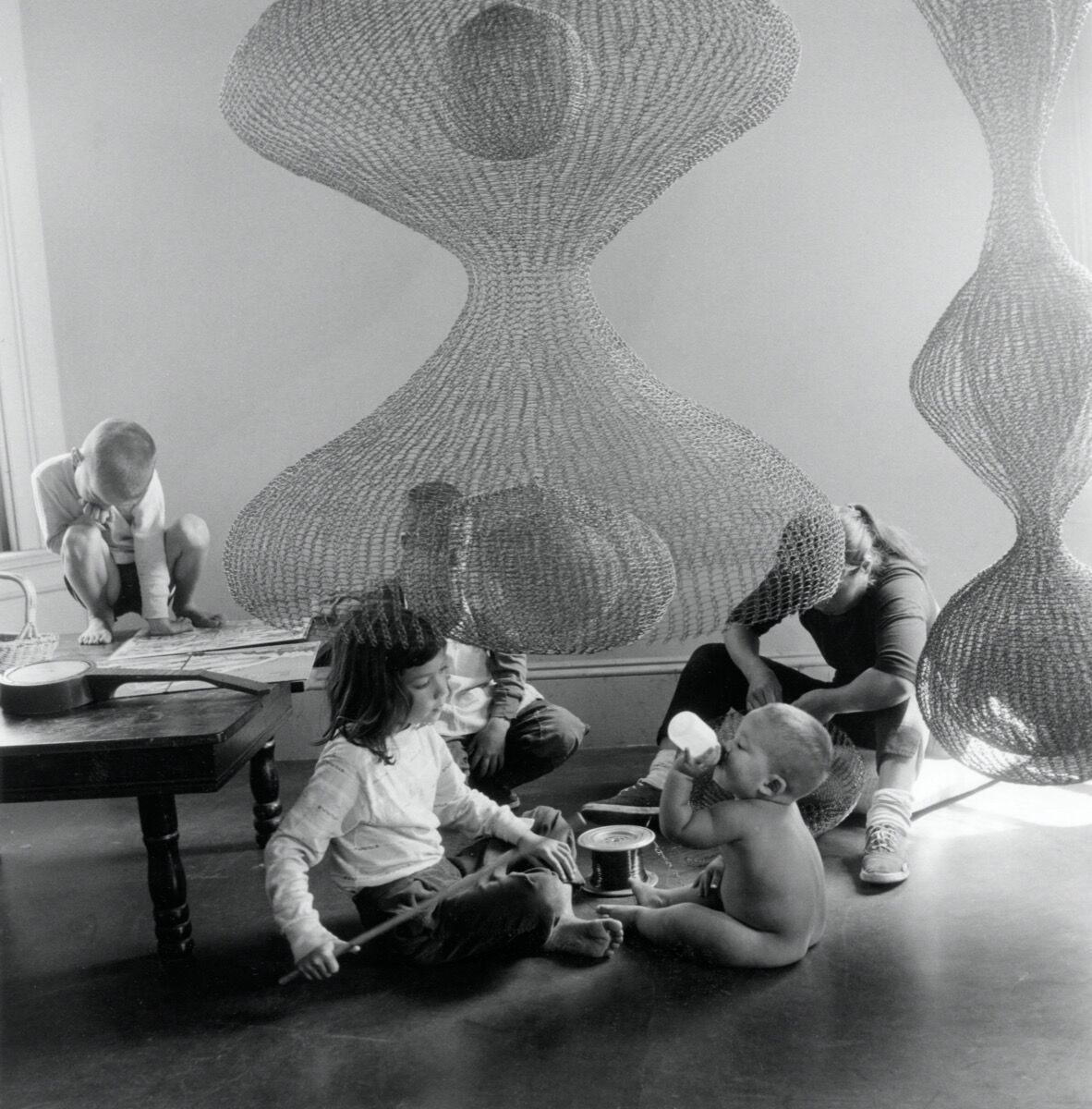 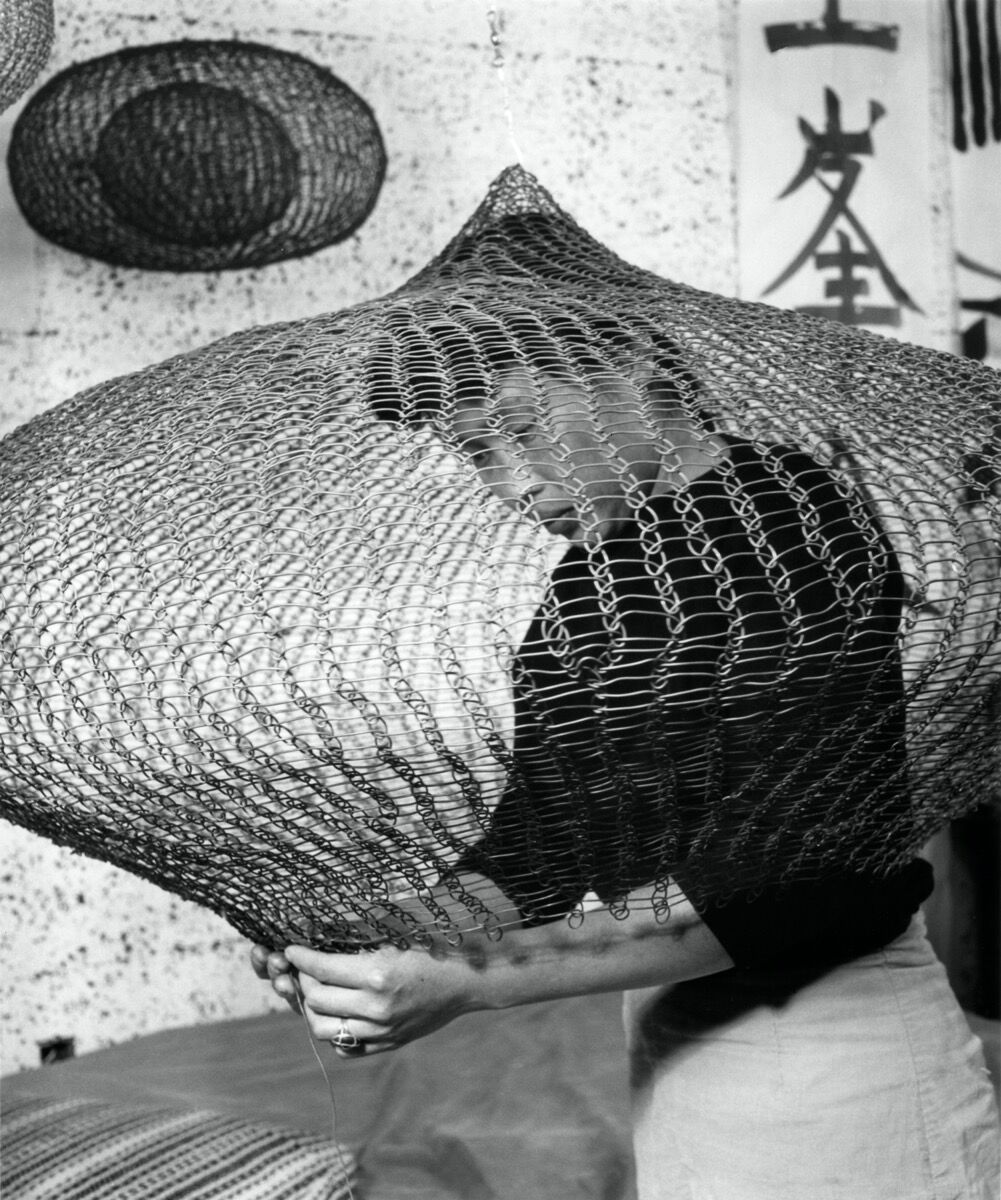 Inspired by the time spent raising her children, Asawa reignited her passion for teaching and became heavily involved in arts education advocacy in San Francisco. In 1968, she co-founded the Alvarado School Arts Workshop, a program that helped children develop through arts education. Though the program started with little to no funding, at its peak, it was implemented throughout 50 San Francisco schools. In 1982, Asawa helped found a public high school for the arts in San Francisco; in 2010, the school was renamed Ruth Asawa San Francisco School of the Arts.
Asawa’s commitment to community building and activism also led her to create a number of prominent public art sculptures throughout California. Her first public work took the form of a large fountain featuring a mermaid statue in San Francisco’s famous Ghirardelli Square. In 2002, Asawa completed her last public commission, called the Garden of Remembrance, at San Francisco State University, utilizing 10 boulders that represented each of the 10 internment camps set up during World War II.
On August 6, 2013, Asawa passed away in her sleep. Commemorating her legacy and the powerful impact she had on her community, this year, the United States Postal Service announced a new stamp booklet that will feature Asawa’s sculptures. 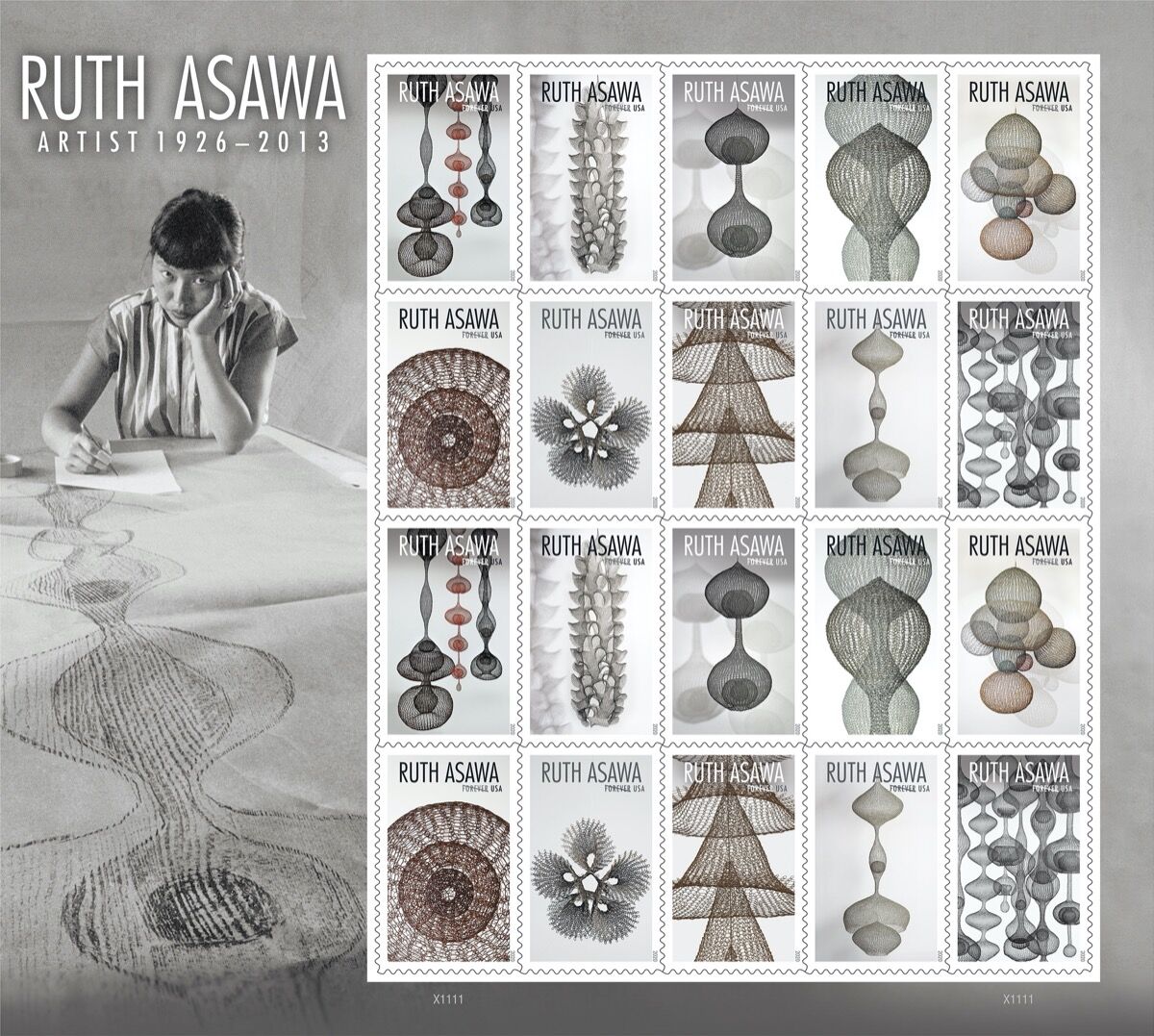 In 2017, the gallery David Zwirner, which is the current manager of Asawa’s estate, held its first solo exhibition of the artist’s work in one of its New York locations. The show was curated by Laib, who formed a connection with Asawa when he worked as a senior vice president and senior specialist of post-war and contemporary art at Christie’s. He joined David Zwirner as a director in 2017, bringing the representation of Asawa’s estate with him.
Asawa’s journey is a lesson in the art of transformation. As she once said, “Sculpture is like farming. If you just keep at it, you can get quite a lot done.” The world will never stop throwing obstacles in our way; the only thing we can control is how we handle it all. Each step in Asawa’s life gently reminds us of her mother Haru’s most important values: gaman—endurance; nintai—patience; and enryo—restraint.
Daria Harper
Related Stories