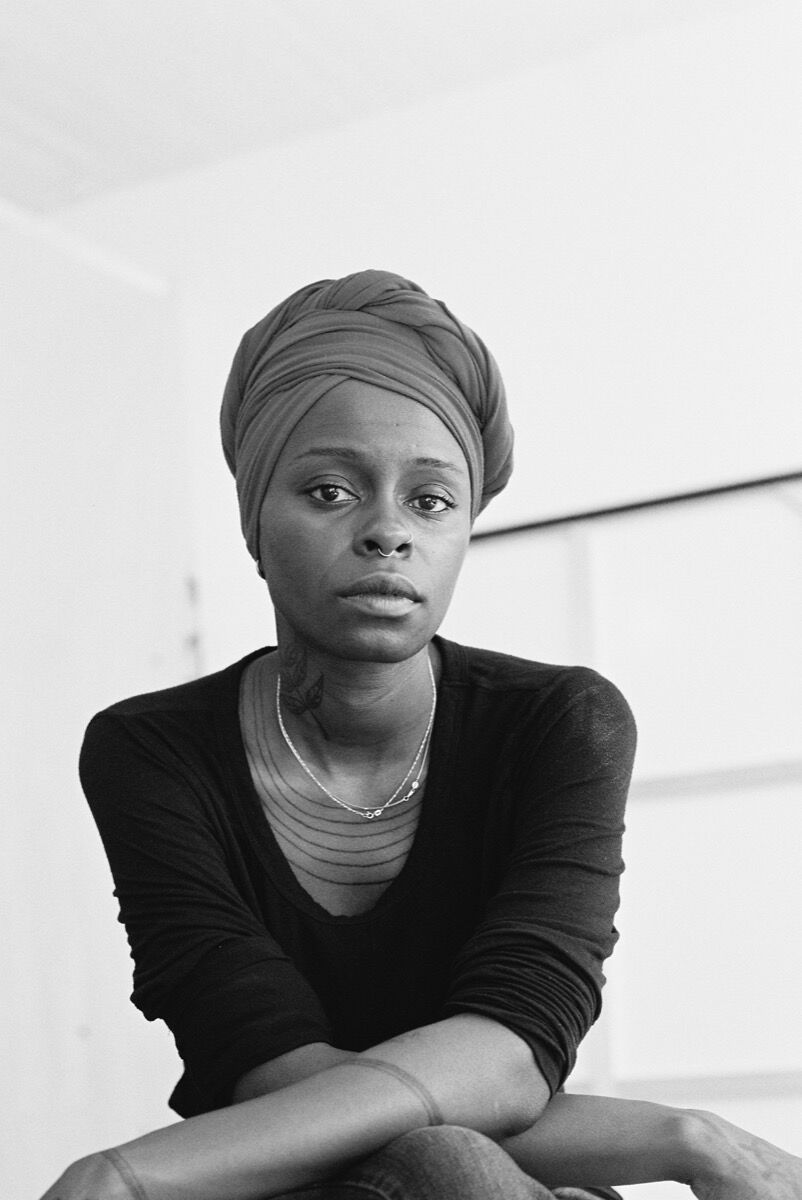 Portrait of Toyin Ojih Odutola by Beth Wilkinson. Courtesy of the artist.

In Paul Thomas Anderson’s 2017 film Phantom Thread, Daniel Day-Lewis’s character, a fashion designer, embroiders the garments he makes with secret messages of his choosing. Customers may eventually own his work, subsuming the dresses he creates into their lives and habits. But each will forever hold the covert mark of its creator.
Toyin Ojih Odutola
is an acclaimed visual artist, not a fashion designer, but she said that her creative process bears some similarities. She’s long made texts to accompany her heavily layered portrait drawings, but has rarely exhibited these passages. Instead, they’ve been rendered tokens secretly imbued in the works, invisible to everyone but her. 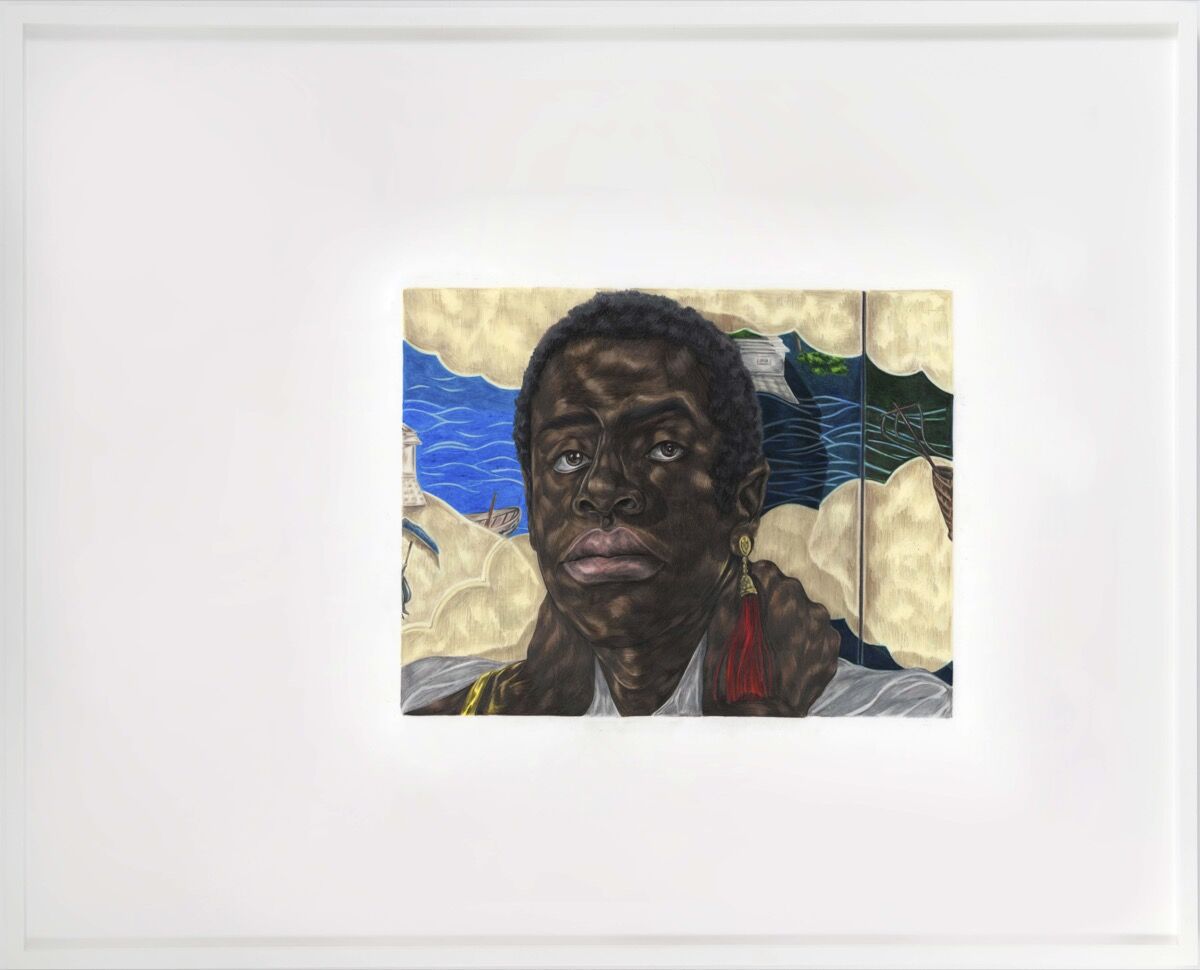 But the pieces in her latest show, “Tell Me a Story, I Don’t Care If It’s True,” currently displayed in Jack Shainman Gallery’s digital viewing room—and headed to a forthcoming exhibition in New York planned for September—were created largely while Ojih Odutola lived in lockdown. The solitude of life during the COVID-19 pandemic left her particularly curious about the inner lives of others, and perhaps willing to invite viewers into a new level of intimacy with her work. The show she created largely consists of diptychs—drawings paired with written vignettes. “I took the thread out,” she said, “and just laid it there alongside the dress.”
Working primarily in graphite and colored pencils, Ojih Odutola creates portraits lush with yearning—works filled with quiet worlds and enigmatic dramas. So it’s fitting that, with the works in “Tell Me a Story,” she grapples with both the importance of narratives, her role as artist and raconteur, and the singular storytelling powers that lie at the intersection of images and text. 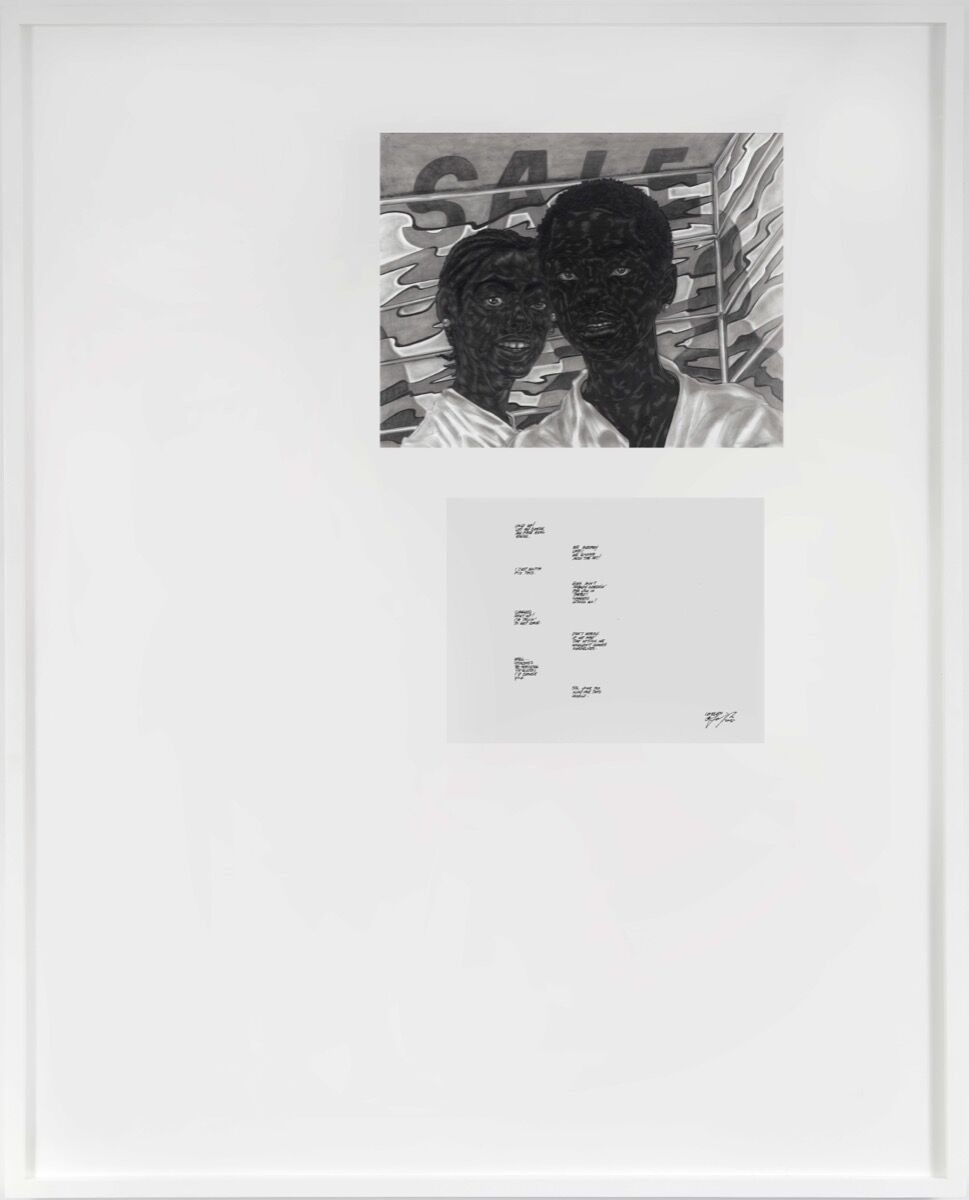 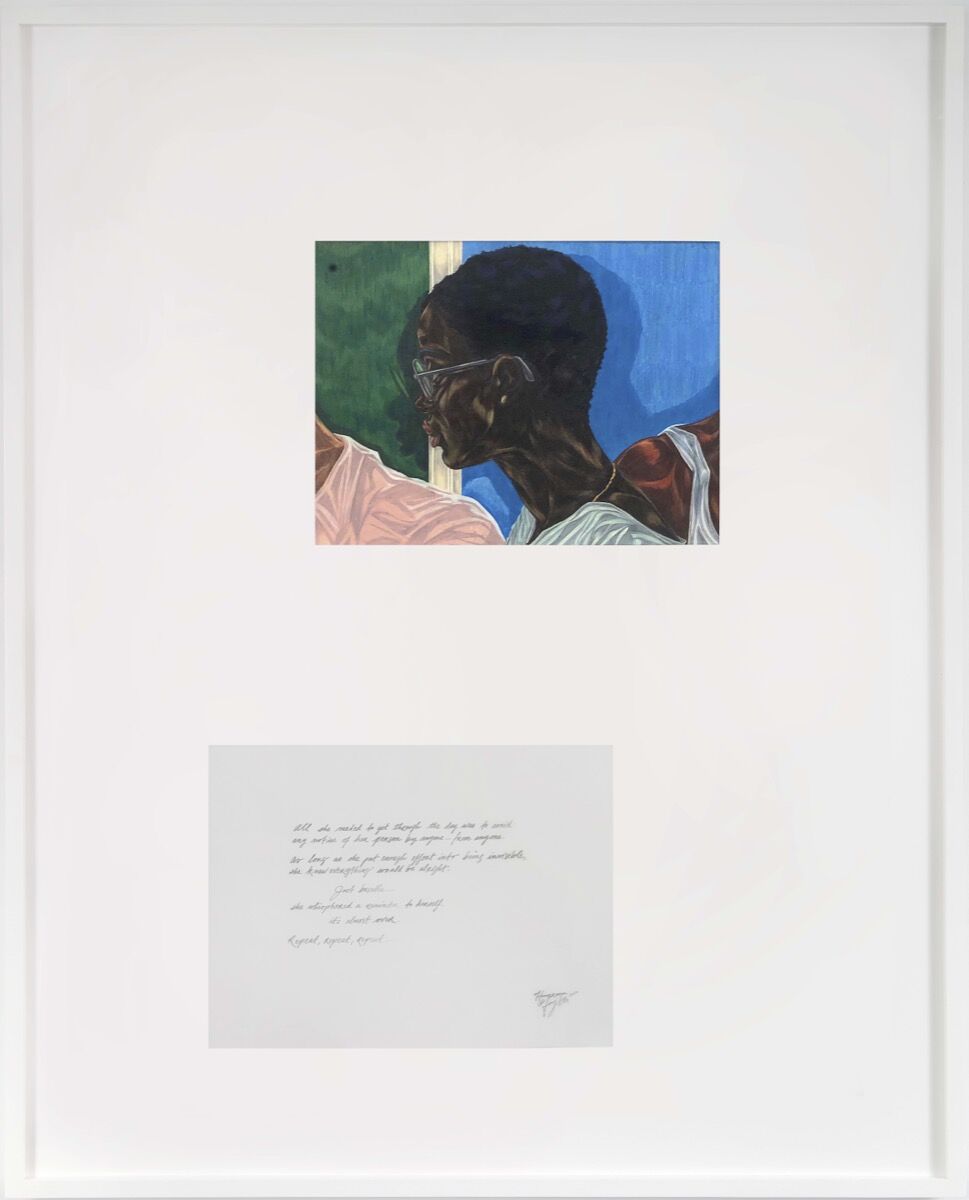 Advertisement
Most of the works in the show are tightly framed portraits of solitary subjects; their faces could exist in thousands of contexts. Some of the accompanying vignettes offer relatively straightforward guides, as in the affectionate Chosen (2020). The piece depicts Black girls on their way to a show, wearing matching white tops and pearl earrings, as they stop to interrogate their reflections. The text takes the form of a dialogue: “I’m tryin’ to get chose,” one says. “If we had the option, we wouldn’t choose ourselves,” her friend quips in response.
Others texts are more cryptic. Both (2020) features the face of a man, his mouth and chin out of frame, against a mottled yet luminous red background; his eyes are wide and search upwards. Is he guarding against a looming threat? Or do his arching eyebrows convey simple skepticism? The single line paired with the work answers this question, and any other conjunctive question posed by its subject or viewer: “It can be both.” 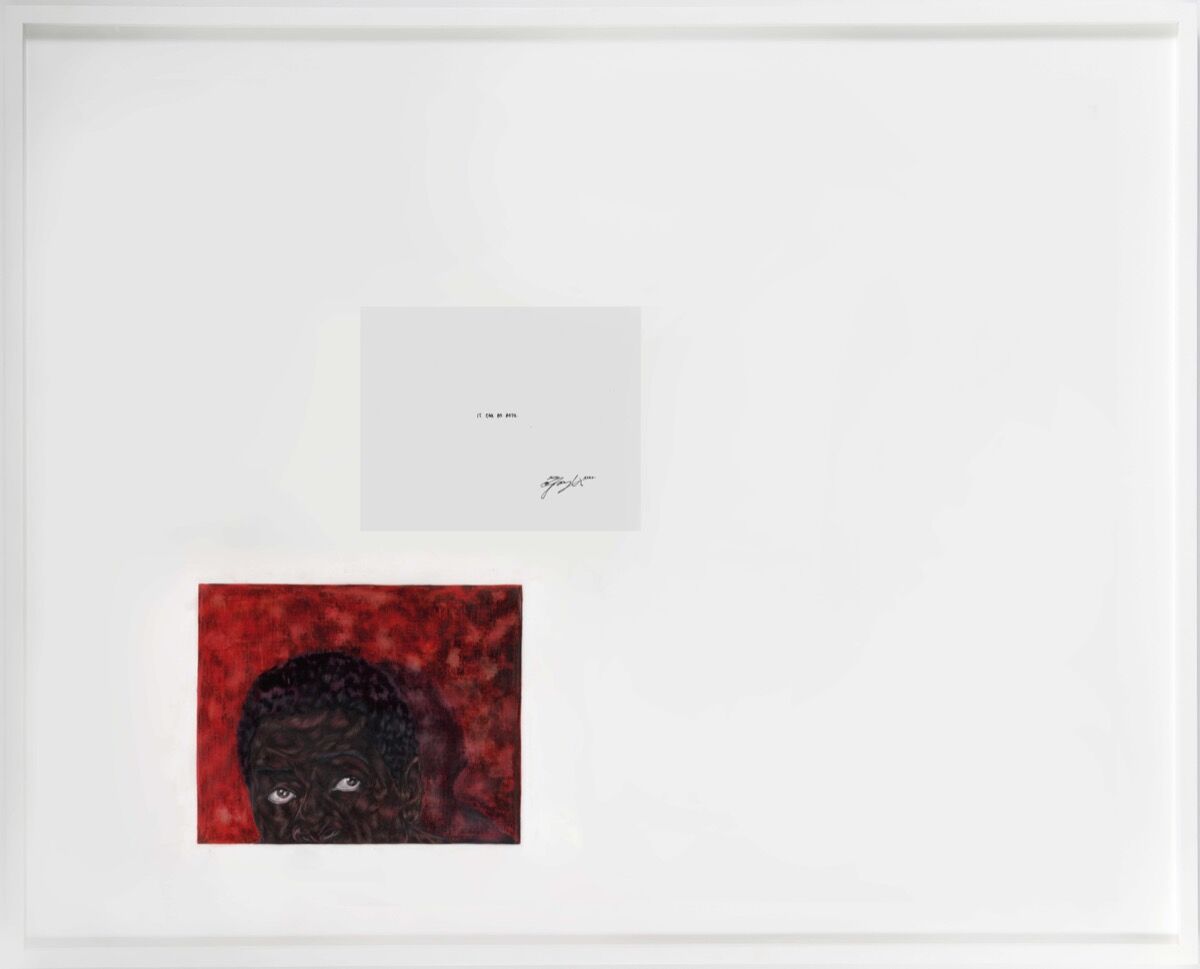 Other pieces lack text altogether. One of the most arresting works in the series, Streets Ain’t Ready (2020), depicts a young man lounging shirtless in a summery malaise infused with languid nobility, cell phone in hand but held at the very edge of the frame.
“One of the things I struggled with throughout my career, and probably will for the rest of my life,” said Ojih Odutola, “is that I give too much information.” She was perhaps being overly self-critical, but this concern for striking a balance between ambiguity and certainty, disclosure and opacity, pervades her work. 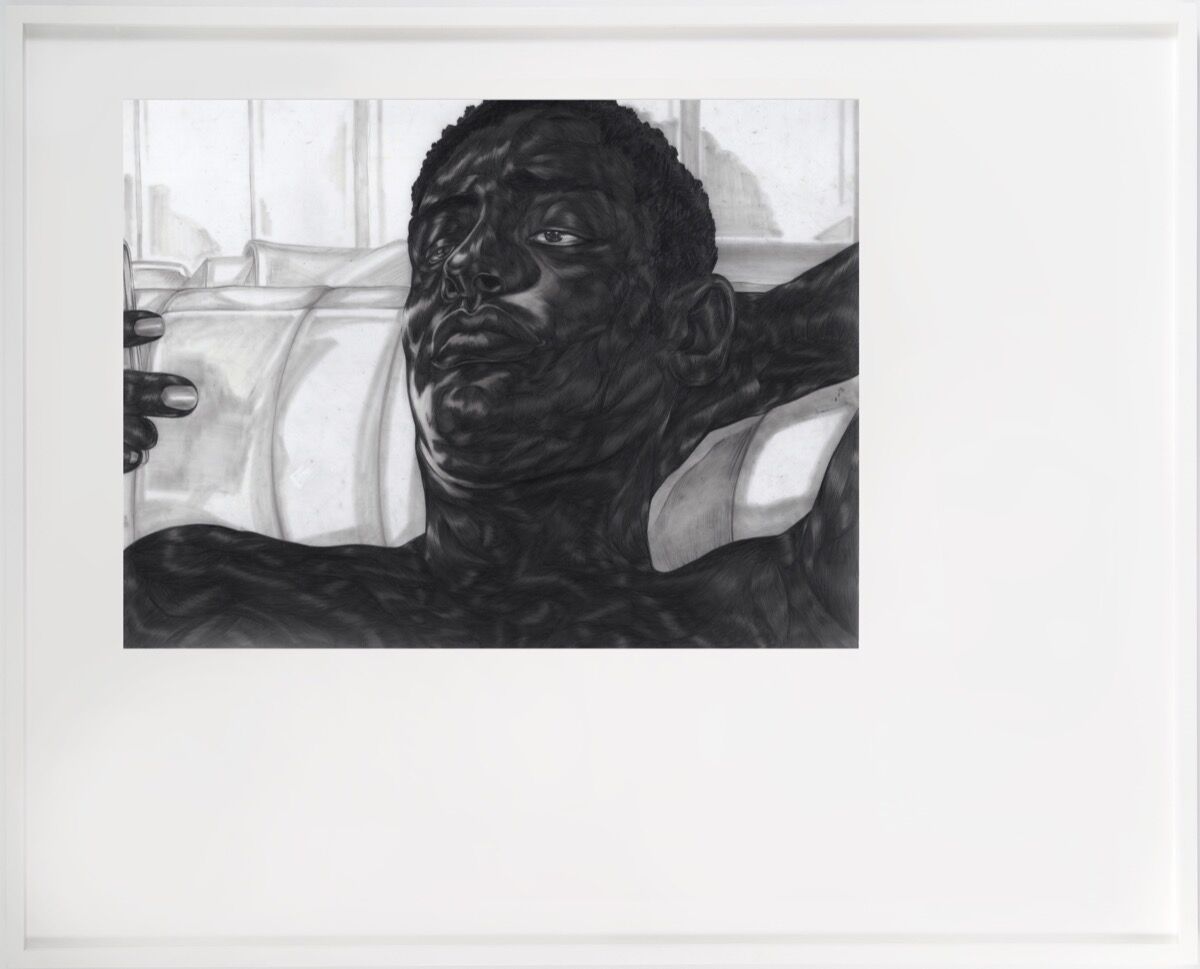 Ojih Odutola was born in Nigeria in 1985 and raised in Alabama, and primarily draws Black figures. Especially in times marked by heightened racial anxiety, there’s a desire by the white world to read Black art as being biographical, and to press artists into roles as “edgy” but ultimately unchallenging educators, offering a Rosetta Stone to their cultures. Ojih Odutola nimbly navigates these expectations, weaving biographical elements into her works entirely on her own terms, and wielding full control over her explanatory power over the narratives she tells.
To Ojih Odutola, the expectation that her work be biographical “is an imperialist position.” It’s white audiences saying, “‘Okay. I don’t understand what you are. Make it into a bite-sized form so that I can digest it. Make it more palatable for my mind and my tongue,’” she said. 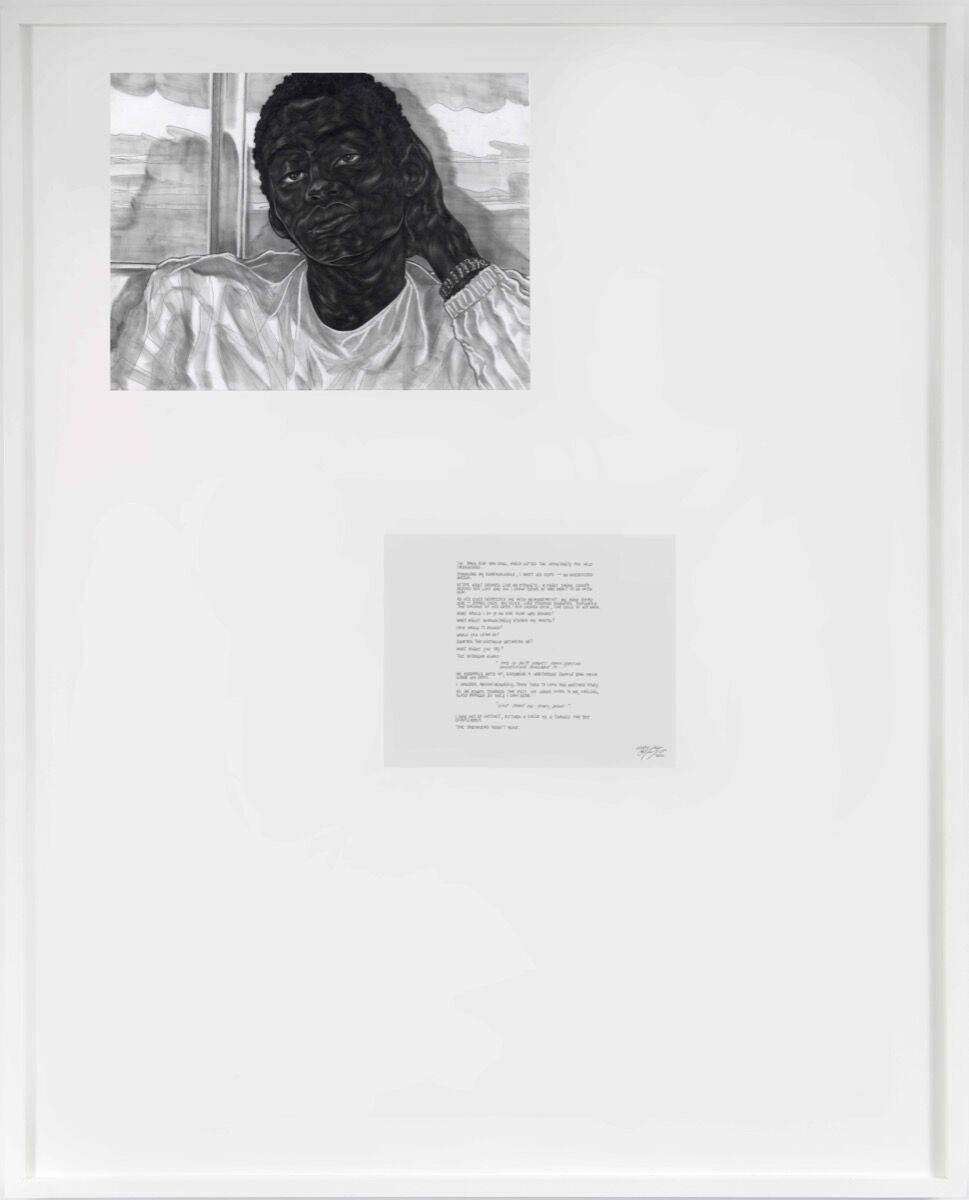 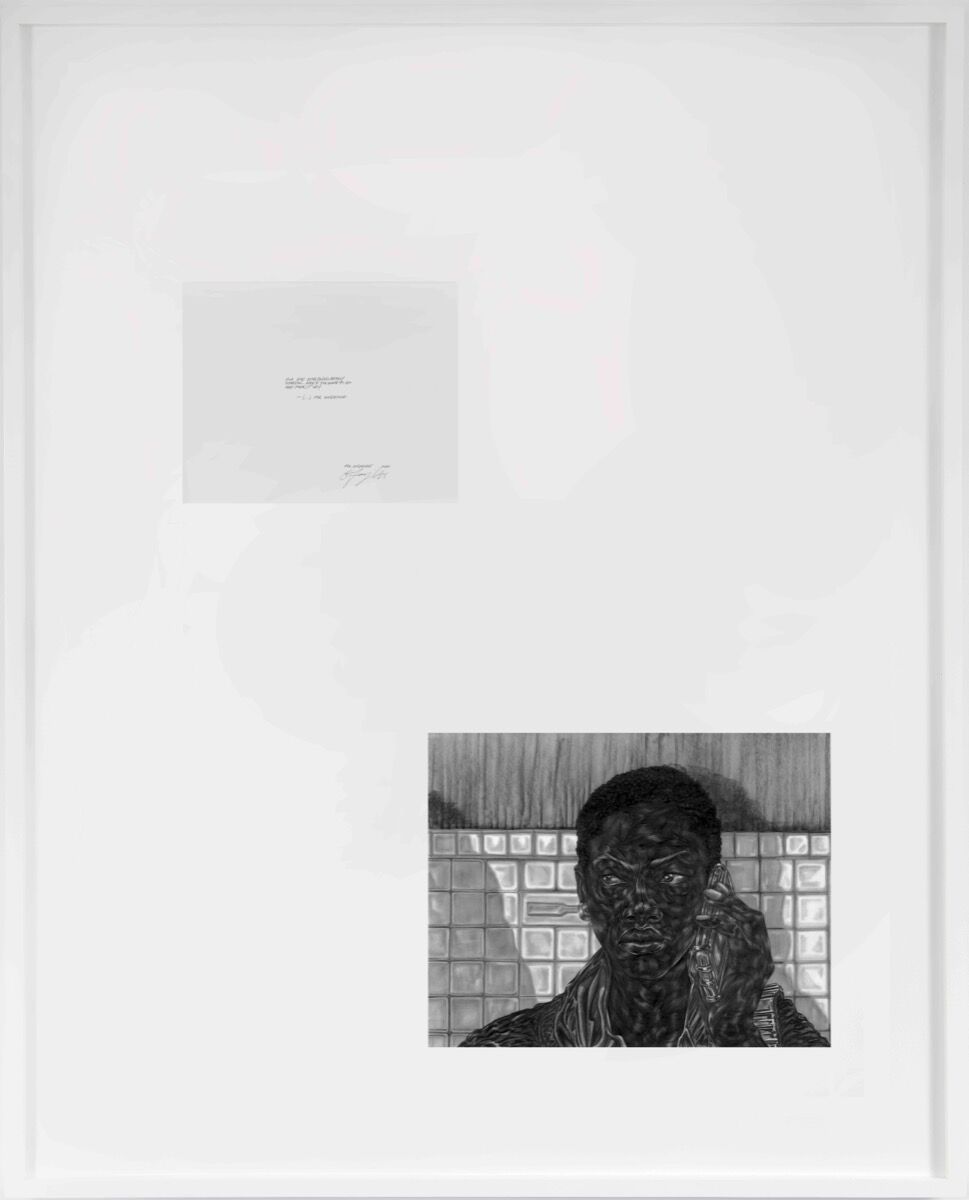 “Yes, I was born in Nigeria. Yes, my family is Yoruba and Igbo,” she continued. “These are things that I start from. They are not an endpoint. I know I keep talking about my biography as an obfuscation—because it is.”
Still, she refuses to squeeze herself into a corner of imposed absolutes by rejecting biographical artistic ties altogether. Between 2016 and 2018, she drew a three-part series that imagined a present-day Nigeria untouched by colonialism. The works—some of which were included in her 2017–18 solo show at the Whitney Museum of American Art, “To Wander Undetermined”—feature members of two fictional patrician families, the Emeka and Omodele, who are united through the marriage of their sons. Against this broadly sketched background, Ojih Odutola drew scenes both familiar and enigmatic. One especially gentle work features a small boy looking nervously out of the confines of his bed, titled First Night at Boarding School (2017). Others hold their secrets more closely, like the portrait of four well-dressed women called The Adventuress Club, Est. 1922 (2016). 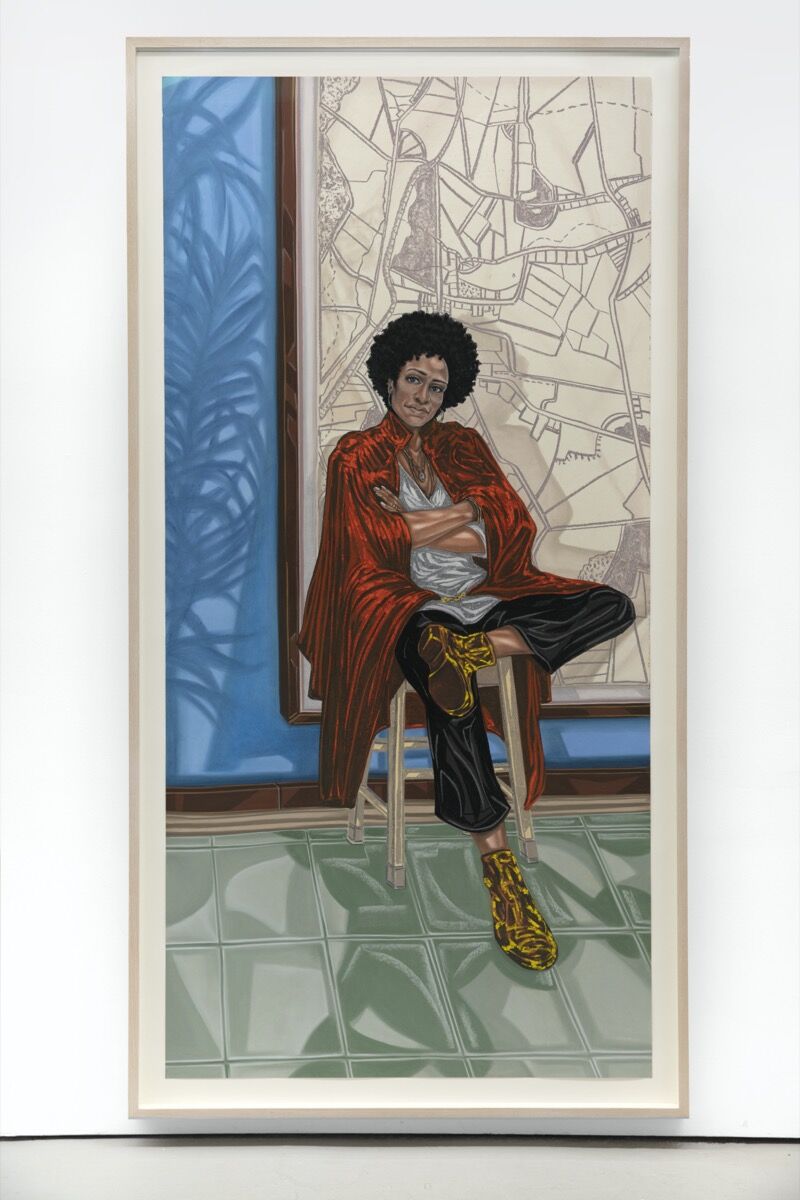 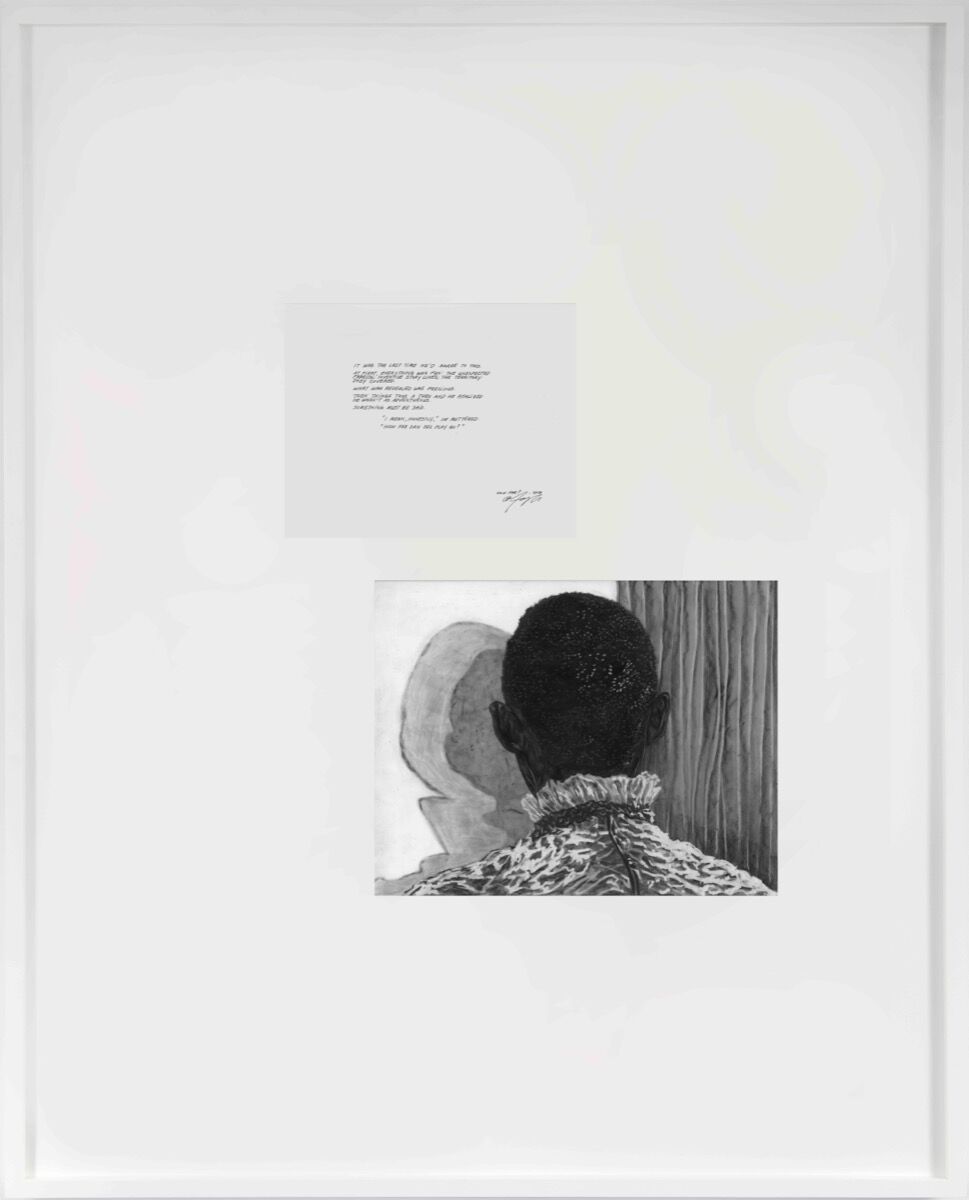 Acclaimed writer Zadie Smith, who was portrayed by Ojih Odutola for a commission at the National Portrait Gallery in London that was unveiled this week, recalled in an interview with art historian Katy Hessel and the artist that visiting the Whitney show was like “walking into a novel.”
“Not only because it was filled with fully imagined and animated people within a dense narrative,” Smith continued, “but because the world is so self-sufficient, so obviously the product of a singular, obsessive vision and so independent of reality (while using some of the tools of realism). Yet each picture, despite its roots in the imagined, gives the sense of being absolutely necessary—of having to be exactly as it is. That mixture of the imagined and the urgent is what really struck me.” 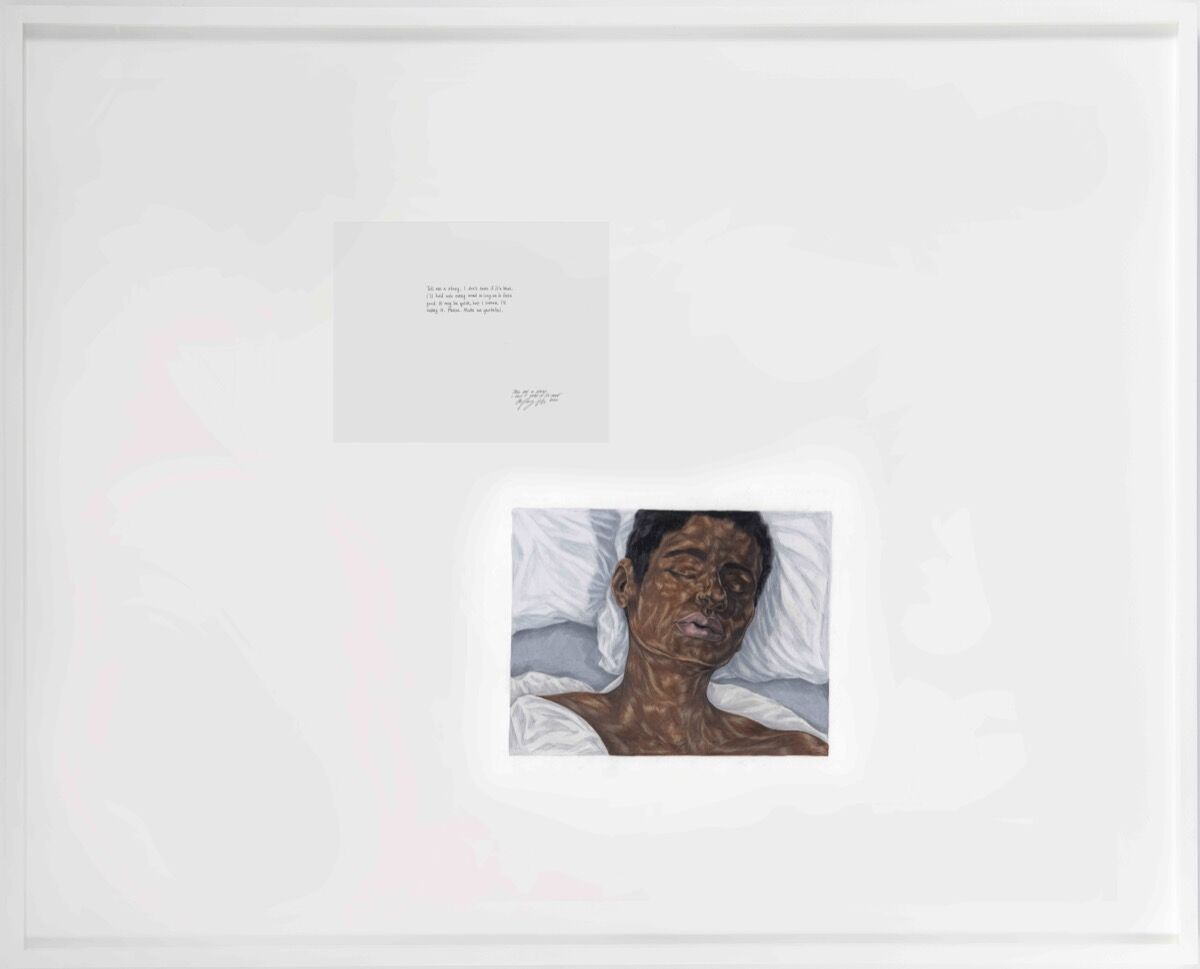 The Emeka and Omodele series made use of text as well, with explanatory passages outlining in broad strokes these families and their worlds, and, in one case, through a tender letter from one fictional father to his son. In the mythology of the Emeka and Omodele’s world, Oijh Odutola positioned herself as a secretary, managing communications for her high-born employers.
Ojih Odutola is returning to specifically Nigerian themes with her upcoming show at the Barbican, which is planned to open this August, after being postponed due to COVID-19. “A Countervailing Theory” weaves tales of imagined Nigerian mythology that tacitly offsets imperialist mythology projected upon the nation. As the country is ramping up its mining industry, Ojih Odutola’s work imagines that one such operation stumbles upon ancient pictographs from a hitherto unknown Central Nigerian civilization. The preview images of the works suggest a new style for the artist, transforming her signature sinewy skin into ashen, humanoid figures formed of gently interlocking segments. Ojih Odutola positions herself as a liaison for the works, acting as an archaeologist charged with deciphering them. 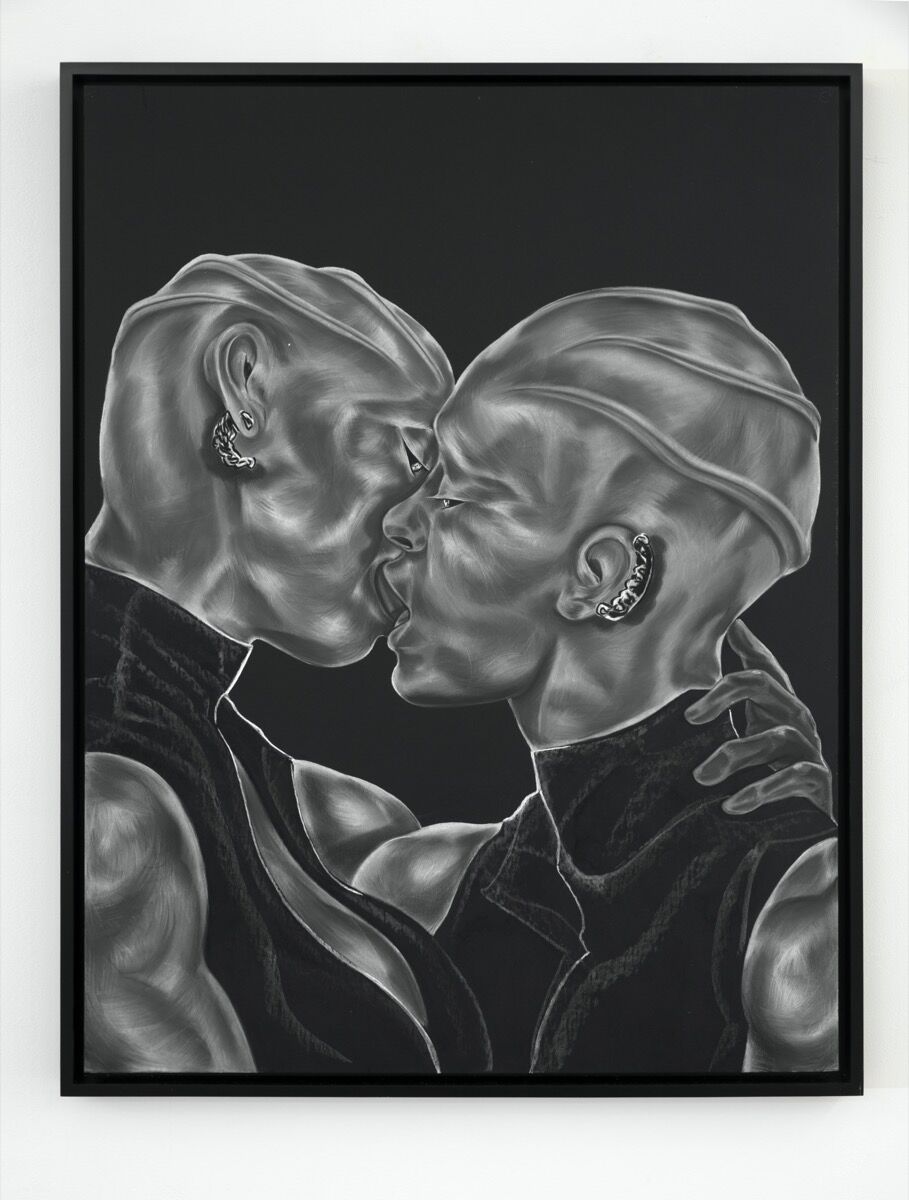 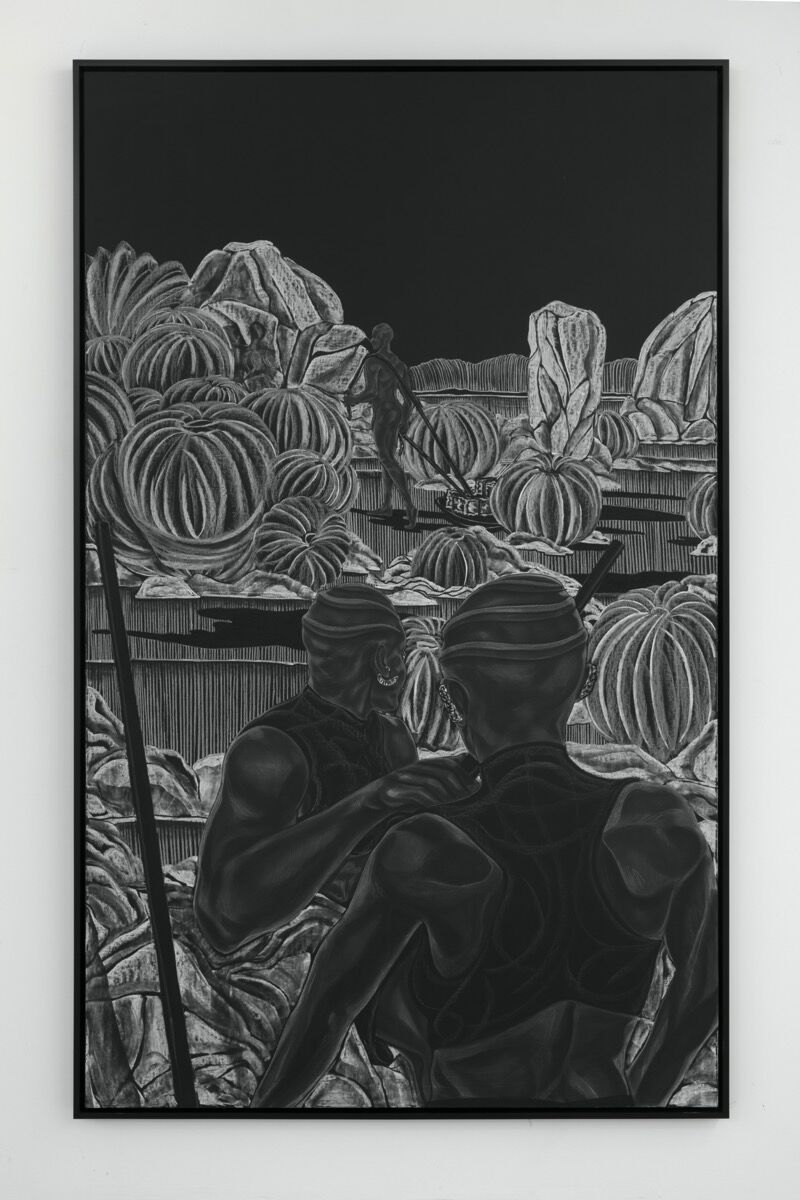 In making herself a neutral translator rather than creator, Ojih Odutola subverts biographical expectations, placing herself at the periphery of the stories she tells. But her attraction to these communicator roles also has personal roots. When she was a child, newly arrived in the U.S., she struggled to understand English language aphorisms and slang. Later, she realized that drawing helped her to make sense of layered meanings that had once seemed inscrutable.
This interpreter framing may be absent in her Jack Shainman show, but its title’s testament to the power of stories, both real and imagined, raises similar themes. “The archaeologist’s role, the private secretary—these ruses aren’t meant to be glib,” Ojih Odutola said. “I’m trying to say that as an artist, my role is to help you see beyond the confines of a limited set of meanings and explore a wider array.”
Gabrielle Bruney
Related Stories