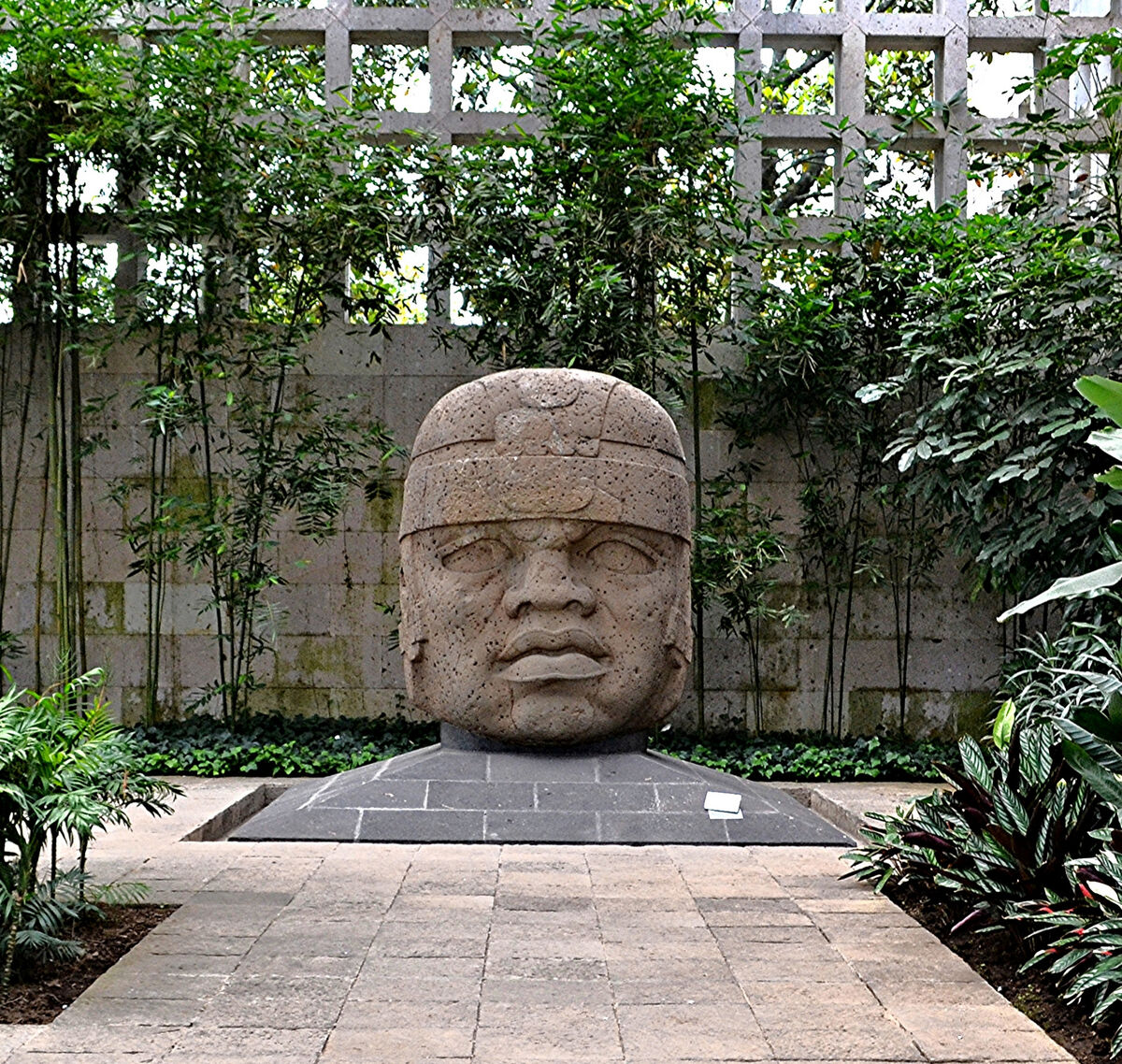 In 1858, a peasant discovered a massive stone head in the ground at Tres Zapotes in southeast Mexico, on the Gulf Coast. It had smooth, flattened features and appeared to be wearing a helmet. Rumors spread, opening up mysteries and lines of inquiry for future generations of archaeologists.
As it turns out, the work was made by a
pre-Columbian
civilization that lived from about 1200–400 BC, called the Olmec (the head itself was probably made and buried before 900 BC). Scholar José María Melgar y Serrano visited first, in 1862, theorizing that the sculpture’s “negroid” attributes indicated long-ago migrations from Africa to the “New World.” Immediately, perceptions of the artwork adopted political overtones.
Mexico had abolished slavery in 1829 under an African-Mexican president, and Melgar y Serrano’s statement suggested ideas about race far ahead of his time (slavery, of course, was legal in the United States until 1865). By suggesting an ancient blending of Mexican and African cultures, Melgar y Serrano was implicitly arguing against the ideas of racial purity that led (and still lead) to violence and oppression. Since their discovery, these Olmec heads have spurred new research and interpretations that, more than anything, offer insight into how we look at other cultures. 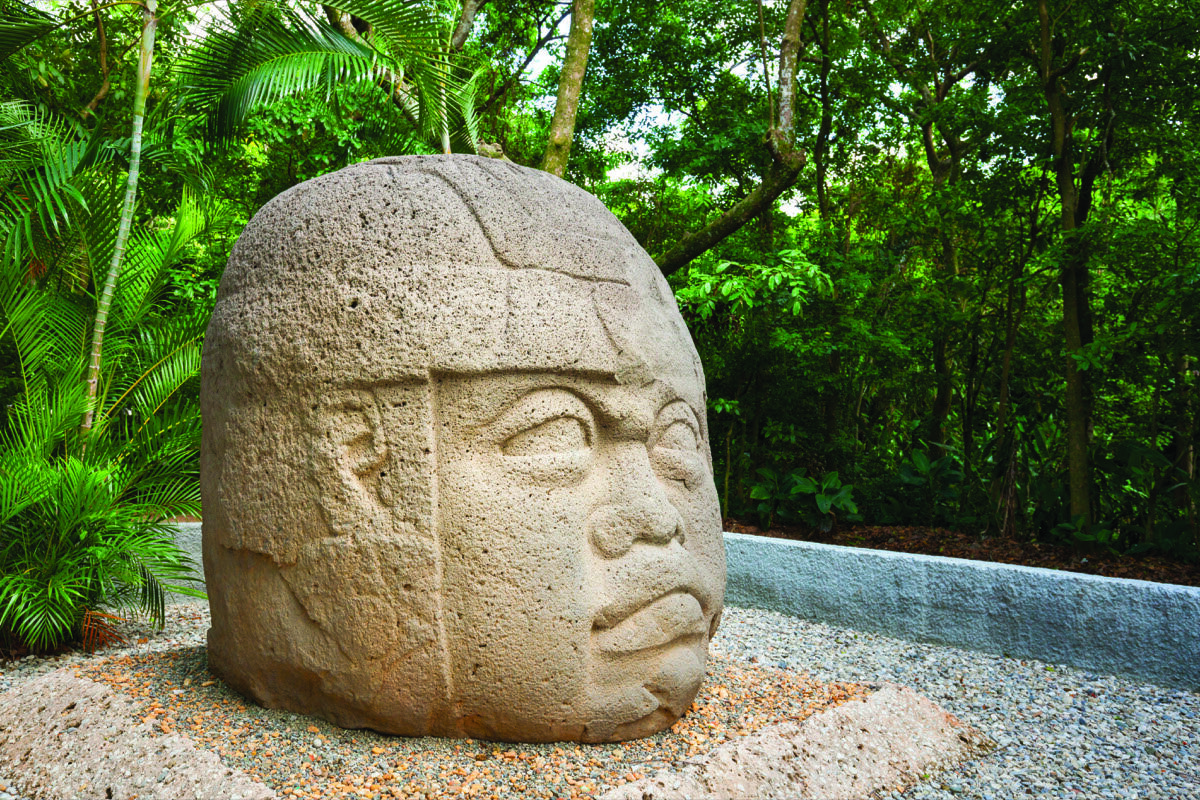 Even the Olmecs’ name derives from how other people saw them. The Aztecs, who lived millennia later (from the 13th through the 16th centuries), developed the moniker. In their own Nahuatl language, the Aztecs called the group “rubber people.” The Olmecs had indeed invented the material by mixing latex from Panama rubber trees with moonflower juice; they would continue to be defined by what they made. Today, hand-carved artifacts still offer our greatest opportunity for insight into their lives—and a testament to the potency of the art and craft that they left behind.
After Melgar y Serrano, public interest in Olmec sculpture languished for almost a century. Finally, in 1938, Smithsonian Institution archaeologist Matthew W. Stirling traveled to the region to photograph the head. Impressed, the National Geographic Society funded another expedition to the region. “One of our important objectives will be to try to determine whether the people who developed the culture of the Tres Zapotes region were Maya,” Stirling told the New York Times.
Serious discoveries commenced, including the revelation that the Maya civilization had actually evolved from this newly uncovered group, the Olmec. As of 2018, archaeologists have located 17 stone heads (also called cabeza nextepetl), many around La Venta and San Lorenzo in the Tabasco region (near the original Tres Zapotes site). Carved from single blocks of basalt, and reaching up to 10.8 feet tall, their particulars are still up for debate. Even now, researchers don’t quite understand how the Olmecs transported the material from quarries, or what the sculptures’ precise purpose was. The stone heads join the Egyptian pyramids and Stonehenge as some of archaeology’s greatest quandaries, indicating powerful and inexplicable prehistoric building abilities. Advertisement
In her new book, How Do We Look: The Body, the Divine, and the Question of Civilization, classicist Mary Beard invokes the example of the Olmec heads to assert that “how we look can confuse, even distort, our understanding of civilisations beyond our own.” She argues that 18th-century scholar Johann Joachim Winckelmann cited the Apollo Belvedere—a sculpture of an idealized human form, either Greek or Roman, its date of creation unknown—as being the “very pinnacle of classical art.” Future generations understood the work as a manifestation of expertly worked out proportions and “civilized” society.
That’s why, Beard suggests, it wasn’t the colossal stone heads but Olmec Wrestler (date unknown) that became “the poster boy not just for the Olmec but for all ancient Mexico,” beginning in the 1960s. Unlike the oversized Olmec heads, the seated figure displays more lifelike proportions, and his arms appear strong and ready to fight; he’s unlike any other discoveries from Mexican antiquity—and is now even considered a potential fake. The Wrestler was said to have been found in 1933 by a farmer near Veracruz, but its stone is unlike any of the area’s natural materials. “The wrestler seems to fall outside many of the canons known for Olmec monumental sculpture,” Susan Millbrath wrote in a 1979 study. She suggested that the wrestler represents “a little-known aspect of Olmec monumental art.”
The Mexican government purchased the sculpture as part of an attempt to glorify the country’s cultural past. As opposed to Melgar y Serrano, who’d tied ancient Mexican civilization to Africa, the 20th-century authorities seemed compelled to link their past with that of Greece and Rome.
Beard herself is suspicious of the Wrestler’s provenance. She writes, “If this is the work of an outstanding Olmec sculptor, it is one who by chance got later tastes spot on, hitting on the particular blend that we often look for in the art of other cultures: that it should be sufficiently different from our own to count as foreign, but at the same time fully understandable in our own aesthetic terms.” Cantona, a fortified city likely founded by Olmec-Xicalanca groups towards the late Classical Period. Photo by Arian Zwegers, via Flickr.

In other words, any Western, 21st-century viewer appraises art with cultural conditioning that privileges certain classical traits. The Olmec stone heads, which operate outside our ingrained understanding of art in a Greco-Roman sense, can provoke confusion and discomfort. Olmec Wrestler is a safer bet.
In 1996, the Washington Post published an article about the Olmecs, which began: “About 2,500 years ago, when ancient Olympians were running around naked during the Golden Age of Greece, a mysterious, complex civilization in this hemisphere—the first in the Americas—was approaching its decline.”
Immediately, the writer established a classical framework in which the reader could understand the Olmecs’ position in history. (The two societies, of course, had absolutely nothing to do with each other.) While archaeologists initially believed that the Olmecs’ stone heads represented those of the gods, Western preconceptions again proved incorrect: Unlike the Greeks and Romans, the Olmecs turned out not to have represented their deities as humans, but as monsters. The most up-to-date research suggests that instead, these heads represent those of flesh-and-blood Olmec rulers.
It’s impossible, of course, to relinquish the unconscious biases that pervade our judgments. But if we want to ever truly understand the Olmecs—or any other culture, for that matter—we first have to ask ourselves why we see things the way we do.
Alina Cohen
Related Stories