Erika Rothenberg, the Ad Exec Who Turned Her Talents toward Subversive Art 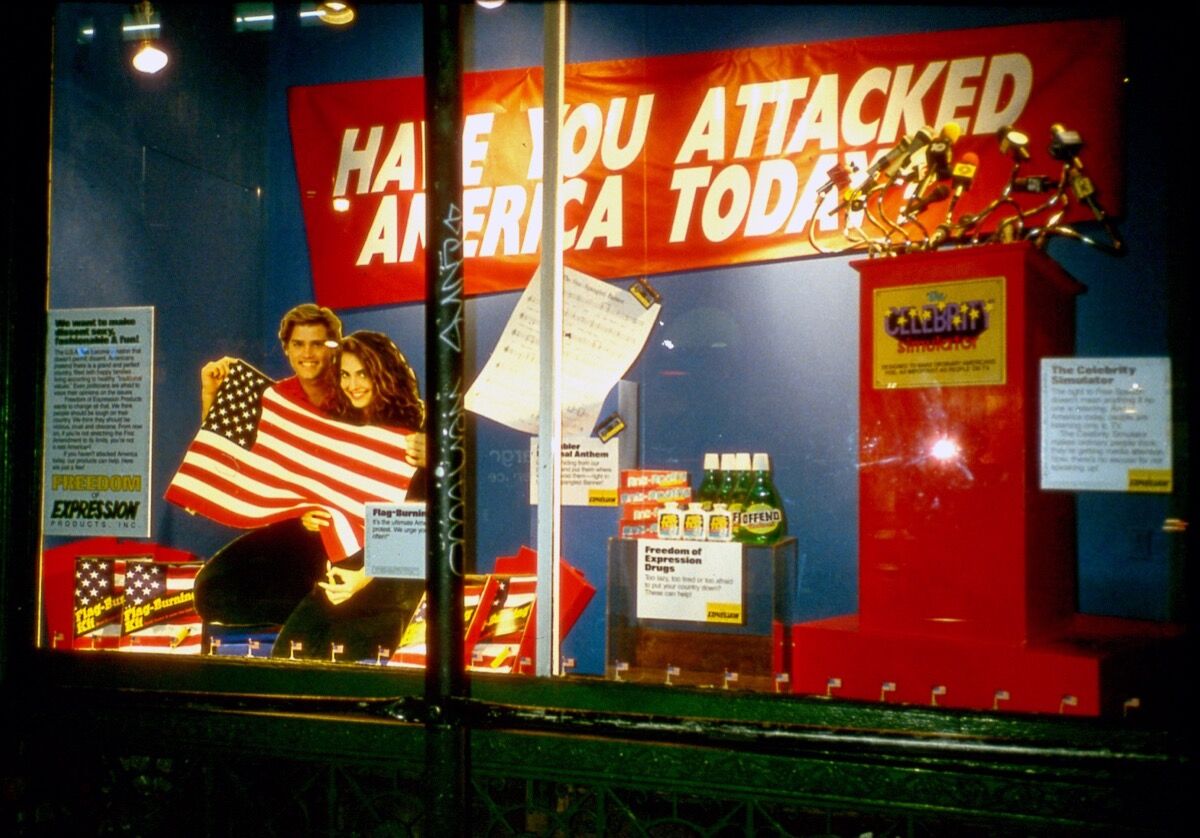 Installation view of Erika Rothenberg, Have You Attacked America Today, at the New Museum, New York, 1989. Courtesy of the artist.

Recently, the Los Angeles–based artist
Erika Rothenberg
, while in the process of moving studios, stumbled across a piece of ad copy she tried to sell to Coca-Cola in 1973. At the time, she was working at McCann Erickson under Bill Backer, the adman responsible for the legendary “I’d Like to Teach the World to Sing (In Perfect Harmony)” soft drink spot.
Rothenberg’s copy was memorable, as well, but for different reasons. She read it to me over the phone:
“Workers of the world, refresh. Overthrow the bondage of parched throats. Gain control of the means of refreshment with the great taste of Coca-Cola. Coke’s cool, clear, crisp taste has soothed more thirsty workers than any other soft drink since the beginning of the Industrial Revolution. Workers of the world, refresh. You’ve got nothing to lose but your thirst.”
Unsurprisingly, Coca-Cola passed—the company apparently wasn’t ready for a campaign that riffed on Marx’s Communist Manifesto. Yet Rothenberg, who went on to become the first female art director at the firm, has made a career out of such sensibilities—though in the art world, rather than the commercial realm. Melding dark humor with marketing techniques she picked up before quitting McCann Erickson in the late 1970s, Rothenberg has been building her critical and political brand of subversive art for over 40 years. Courting controversy and critiquing patriarchal norms are hallmarks of her practice, and she’s always had an activist streak—indeed, she was thrown out of the University of Chicago for taking part in a demonstration. 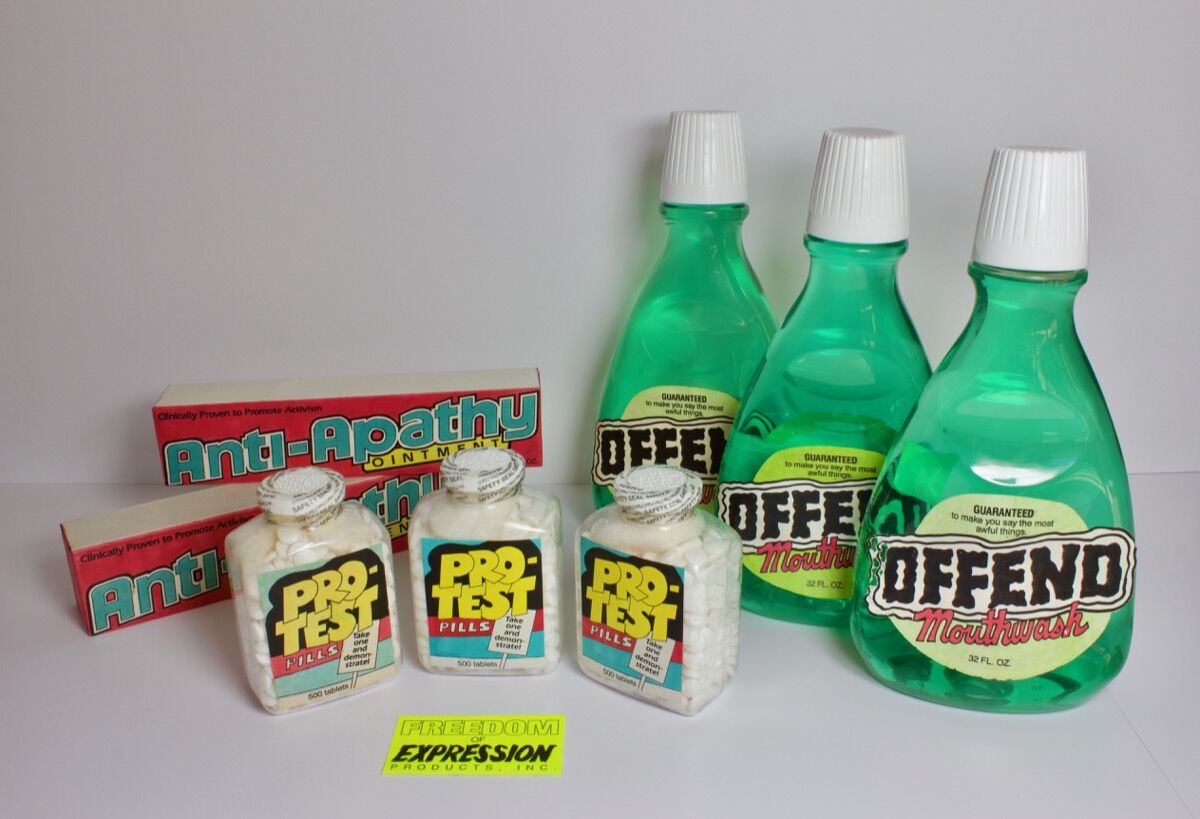 Installation view of Erika Rothenberg, Freedom of Expression Drugs, 1989, at the Hirshhorn Museum, 2018. Courtesy of the artist.

Rothenberg’s early artwork—made when she was simultaneously working long hours on behalf of clients such as Lufthansa and NBC, and living cheaply in a loft on Canal Street in Manhattan—was, as she described it, “obtuse and conceptual.” In order to connect to the world, she decided on something more direct. “Advertising taught me how to use words and images together to make each more than the one alone,” Rothenberg said.
In the early 1980s, she began with a series entitled “Morally Superior Products: A New! Idea for Advertising” (1980–90). Each featured hand-painted storyboards advertising companies both real and imagined, which were not only promoting products, but an agenda. “At that time, there wasn’t this whole push by corporations to do good things, or pretend they were doing good things—they were just out for themselves,” she said. “It was kind of a radical idea that products would advertise how good they were on different social issues.” (Clearly, in our age of Pepsi and Nike activism, times have changed.)
What were the items and ideas Rothenberg was selling? One such example, from 1985, was a “Secret Penis.” The ad features a big-city woman in a suit, interlaid with promotional text: “You’re Smart and Tough and You’ve Made it to V.P. But You’ll Probably Never Make It to The Boardroom. ’Cause You Lack Something That 99% of Top Managers Have: A Penis.” The product offers a solution to women’s woes, along with a catchy tagline: “A Woman Needs to Start At the Bottom In Order to Get to the Top!” 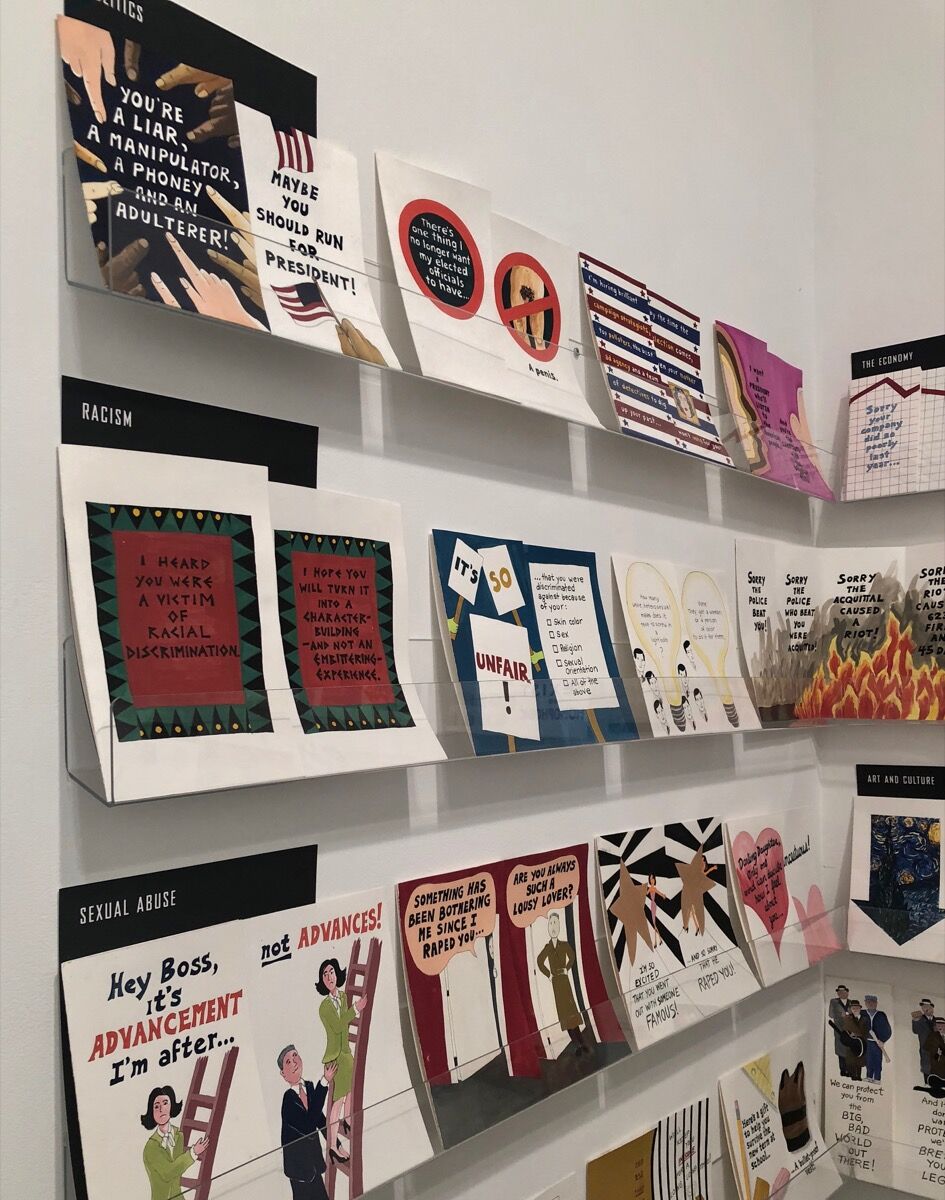 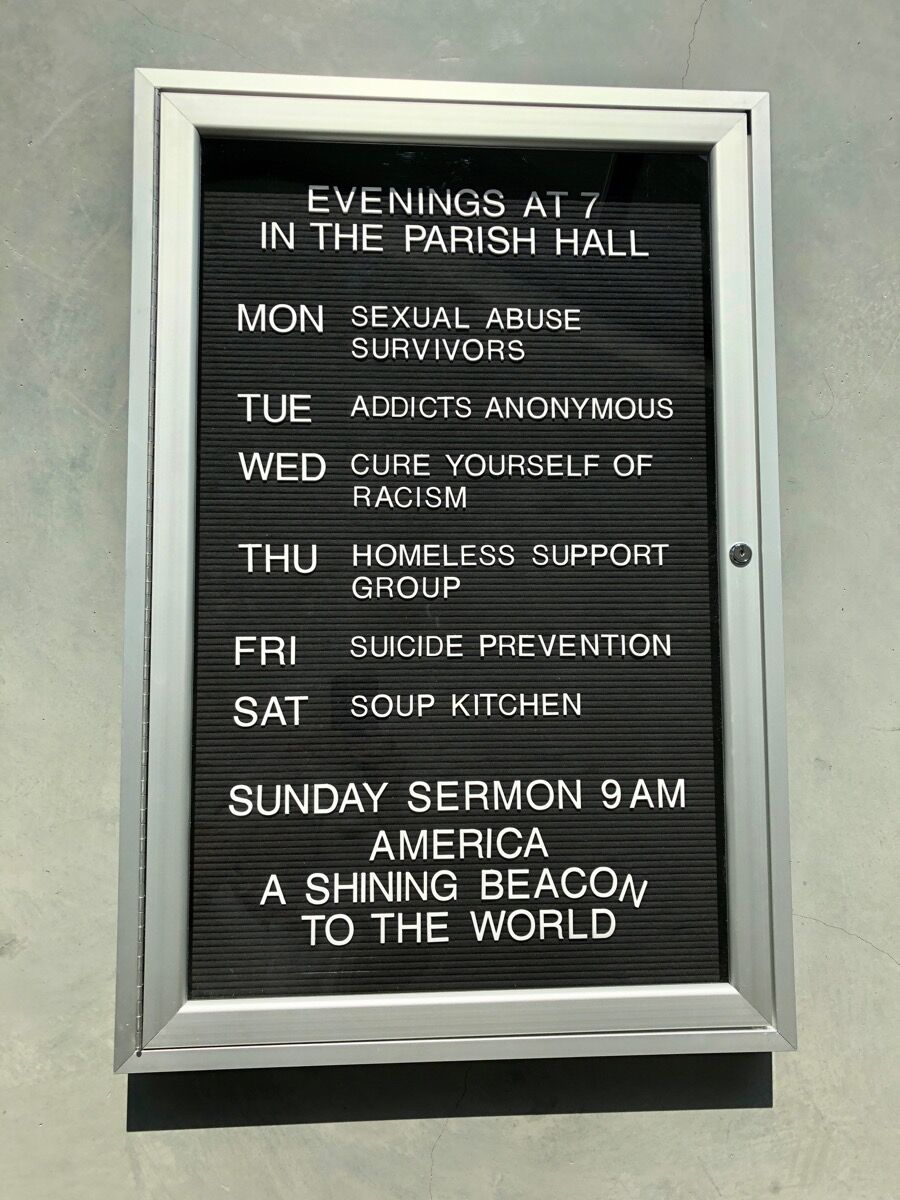 Erika Rothenberg, America, a Shining Beacon to the World, 2018. Courtesy of the artist.

Advertisement
Often, her ire has been directed at how underrepresented women artists are in the contemporary art world. In 1984, the Museum of Modern Art inaugurated its newly renovated and expanded building with the exhibition “An International Survey of Recent Painting and Sculpture,” which featured 165 of the world’s most important painters and sculptors, of whom only 13 were women—while none were women of color. In protest, the feminist group
Guerilla Girls
was born: an anonymous group of artists who fight sexism and racism while hiding their identities behind gorilla suits. (Rothenberg is mum when asked if she’s involved—“there’s a lot of stuff out there,” is the most she’ll say—though she did inadvertently out herself as founding member “
Käthe Kollwitz
” during a 2003 court case.)
By the late 1980s, Ronald Reagan helped reignite conservative fervor, and the art world was under heavy scrutiny.
Robert Mapplethorpe
,
Dread Scott
, and
Andres Serrano
’s boundary-pushing works each received backlash and sparked national debate. In 1989, the Guerilla Girls asked: “Do women have to be naked to get into the Met. Museum?”
That same year, Rothenberg’s solo show “Have You Attacked America Today?” opened at the New Museum. It featured a rewritten version of the “Star-Spangled Banner,” as well as parody products that promised to reduce apathy. The show also spotlighted a large-scale cut-out advertising a flag-burning kit. Marcia Tucker, the founding director of the New Museum, called it the most controversial exhibition the institution had ever hosted; it was vandalized on two occasions by visitors angered by its message.
“If you take on flag-burning, you are always going to be in trouble,” Rothenberg said, reflecting back on the 1989 show. “Flag burning is a basic human right. It’s been tested before the Supreme Court many times—though who knows what’ll happen with the new Supreme Court.” 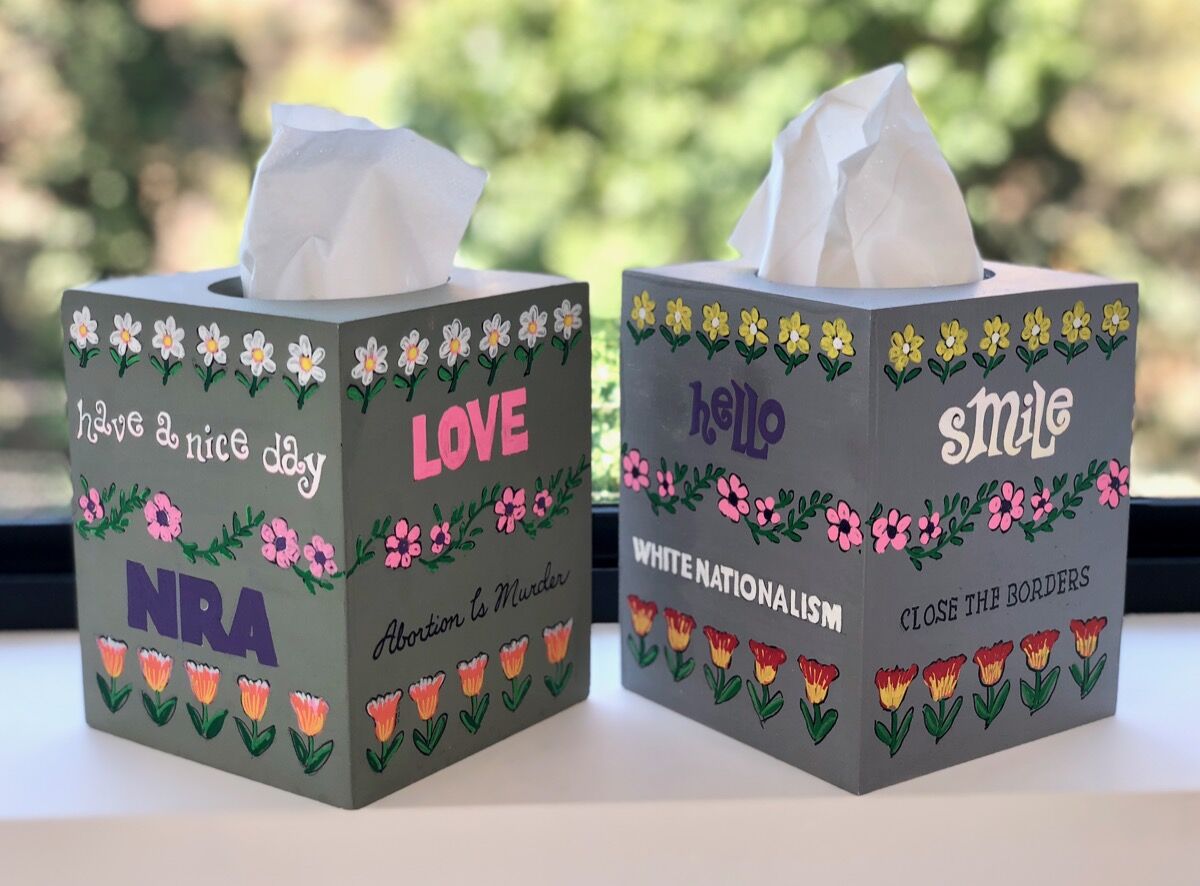 While the conversation has shifted from whether it’s okay to burn a flag to whether it’s okay to kneel in front of one in protest, Rothenberg’s work is still incredibly relevant. In 1992, she exhibited 90 hand-painted greeting cards meant to address the unsavory events Hallmark was excluding from its repertoire. One such example, shown as part of her MoMA show “House of Cards,” reads: “Mazel tov! I’m so glad your state did not elect that Nazi!” Another card from the series features a woman climbing a ladder, warding off an unwanted touch from her supervisor. (“Hey boss, it’s advancement I’m after…not advances!”) The card came one year after Anita Hill’s testimony, and 25 years before the reckonings of the #MeToo movement.
Works from that series are on view once again, at Susan Inglett Gallery in New York through October 20th. Also included in the small exhibition are Rothenberg’s Freedom of Expression Drugs (1989)—items such as anti-apathy ointment and protest pills, which criticized an era Rothenberg viewed as indifferent to political upheaval—as well as more recent greeting cards that address everything from Fox News to Beyoncé.
“I think artists are stuck with their sensibilities,” Rothenberg said of the resolute political streak running through her entire career. “So you try to make it as deep and impactful and push it as much as you can.” The fact that Rothenberg’s oeuvre continues to stand the test of time is a credit to her acerbic, prescient vision of the United States. But it also suggests that the nation tends to subjugate or sideline anyone who doesn’t look like its Founding Fathers. “My work,” she said, “has always been a portrait of America in some way.”
Alex Wexelman
Related Stories 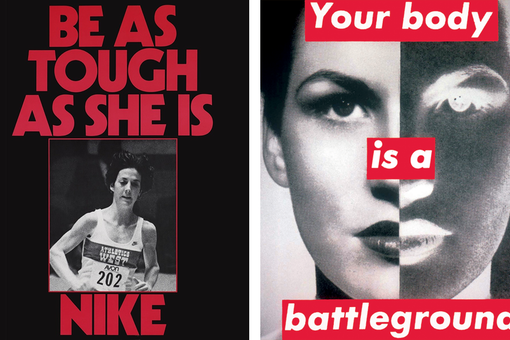