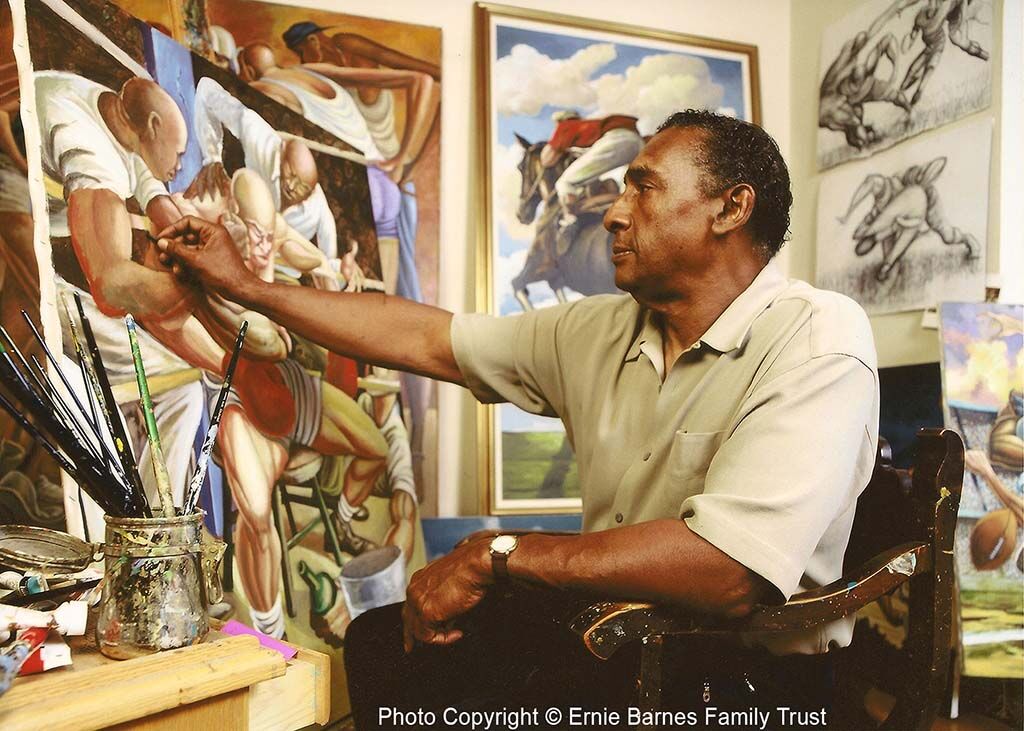 The late
Ernie Barnes
may be the most successful visual artist to ever begin his career playing professional football. In 2019, patrons swarmed on the California African American Museum (CAAM) in Los Angeles to see a major survey of the beloved athlete-turned-painter’s work. The exhibition, titled “Ernie Barnes: A Retrospective,” spanned Barnes’s five-decade career and illuminated his influence on both art history and popular culture.
Barnes is best known for his thoughtful, large-scale paintings of social and sporting events. Inspired by the artist’s childhood in the American South during the Jim Crow era, Barnes’s paintings have become emblematic of mid-century Black Southern life. Barnes painted long-limbed children playing on the sidewalk and brightly dressed lean figures dancing the night away. His work highlights the beauty of quotidian life and encourages interpersonal connection. 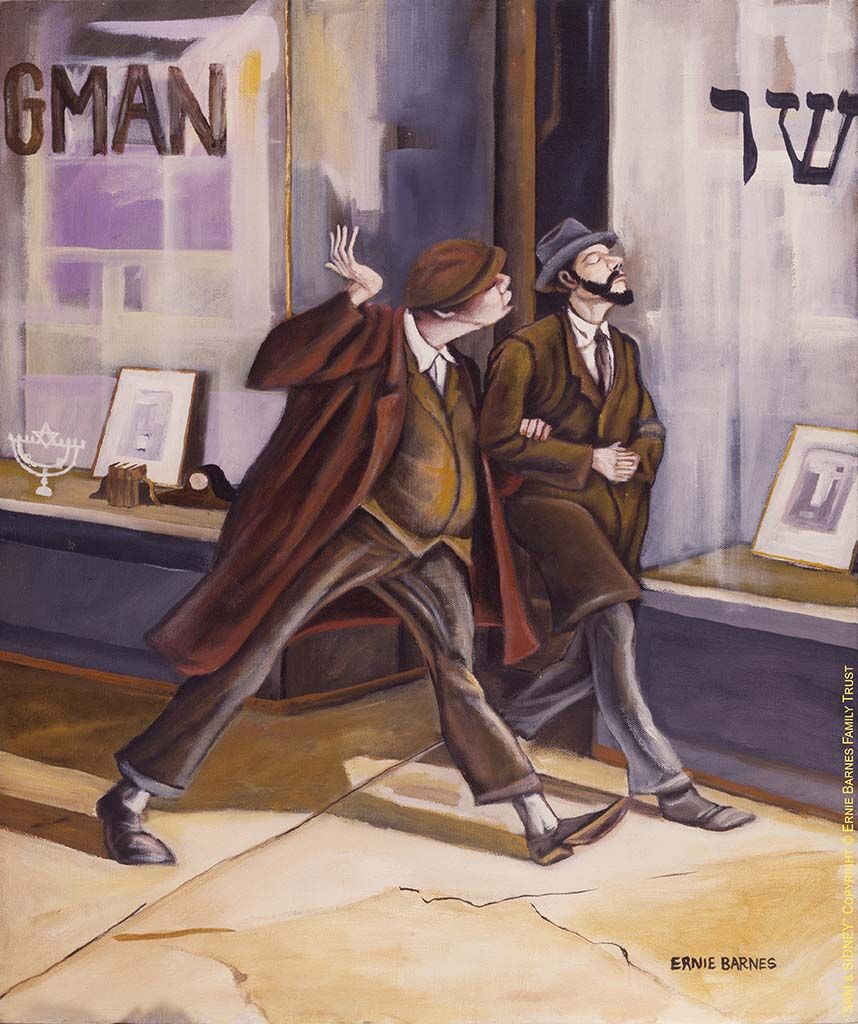 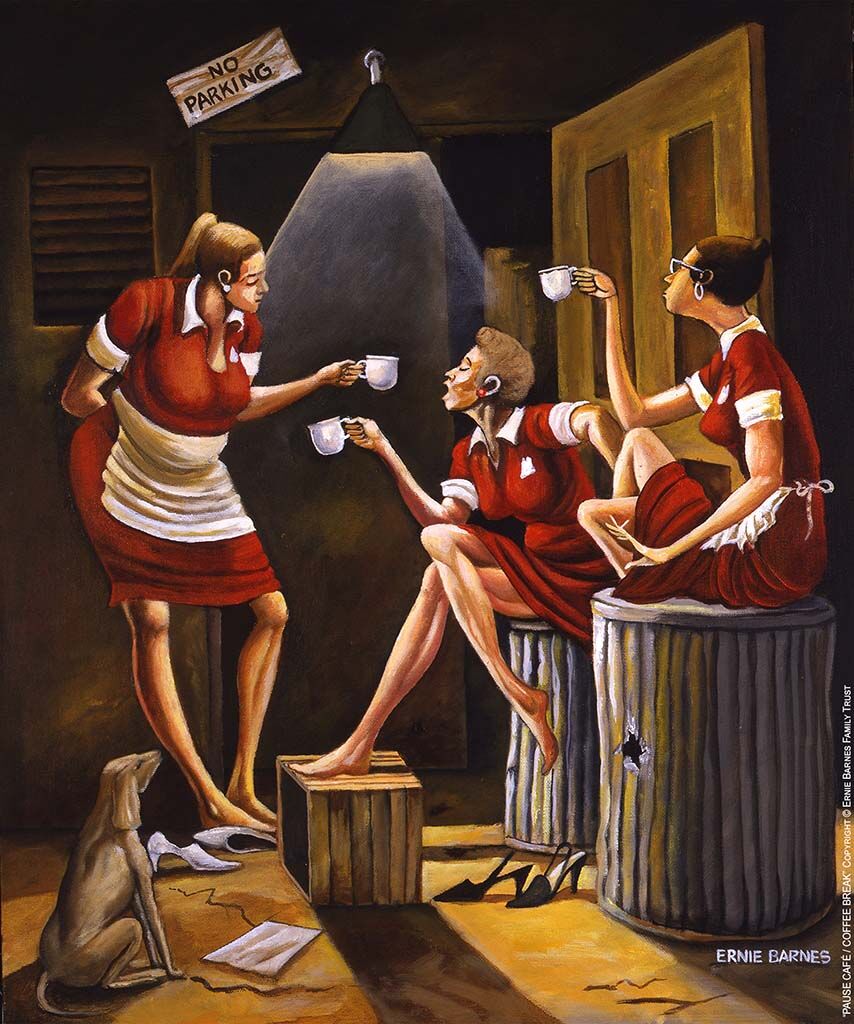 Barnes was born in Durham, North Carolina, in 1938 and demonstrated an early interest in art. The artist’s mother, Fannie, brought him to work when she managed the household staff of leading Durham attorney Frank L. Fuller Jr. The lawyer encouraged Barnes to peruse his countless art books, and by the time the future painter was in first grade, he was familiar with towering art-historical figures ranging from
Henri de Toulouse-Lautrec
to
Michelangelo
.
As a child, Barnes lived in a neighborhood called “The Bottom” during the Jim Crow era. His early experiences there massively influenced his life and eventual artistic practice. Many of his adult works showcased green, rural landscapes that mimicked his hometown’s luscious flora.

Advertisement
Before Barnes could leave his mark on the art world, though, sports became a predominant passion. His tenure as an athlete began when he was a young teen. One day at school, an instructor and former athlete discovered Barnes quietly sketching on his own. Sensing that the young student needed some encouragement, the coach shared how sports could both strengthen him physically and improve his outlook on life. Thanks in part to the coach’s support, Barnes took up football and became the team captain by his senior year of high school.
Barnes attended the all-Black North Carolina College at Durham (now called North Carolina Central University), where he majored in art on a full athletic scholarship for football. In 1959, Barnes was drafted by the Baltimore Colts, who were world champions at the time. He went on to play for the New York Titans, the San Diego Chargers, and the Denver Broncos before landing with the Saskatchewan Roughriders of the Canadian Football League. During a 1965 game with the Roughriders, Barnes injured his right foot, forcing him to retire from professional sports. 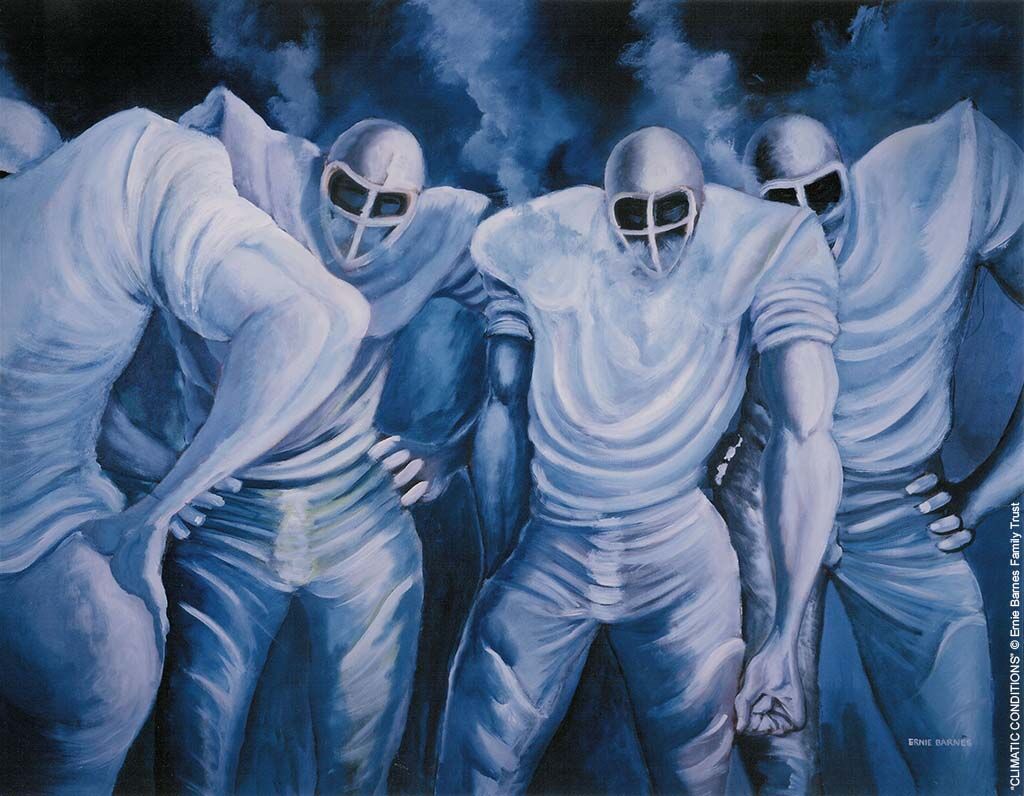 Later that year, Barnes met New York Jets owner Sonny Werblin, who was so impressed by Barnes and his art that he paid for Barnes to bring his work to New York. In November 1966, Werblin hosted Barnes’s debut solo exhibition at the Grand Central Art Galleries in Manhattan, and the show sold out. Yet just weeks before this major achievement, Barnes suffered a major personal loss when his father passed away. The artist began framing his paintings with distressed wood as a tribute, even placing one on his family’s picket fence, which his father had always kept well maintained.
Luz Rodriguez, Barnes’s former assistant and the current manager of his estate, emphasized that Barnes’s artistic expression was enhanced by playing sports. “His art captures an athlete’s mental and physical energy,” she explained. “In his paintings, you can truly feel the movement of the bodies, even in his genre works.” Rodriguez met Barnes when she was working in the news department of the Los Angeles Olympic Organizing Committee for the 1984 Summer Olympics, during which Barnes was appointed the games’ official sports artist. She worked for Barnes over the next 21 years. 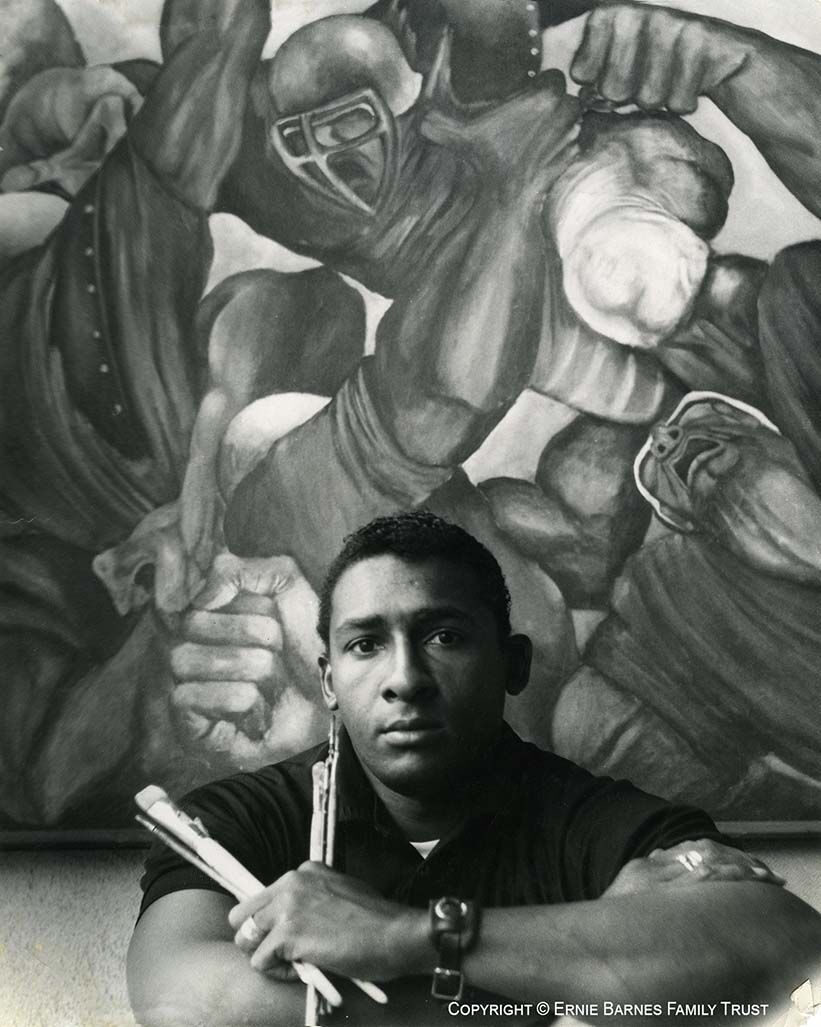 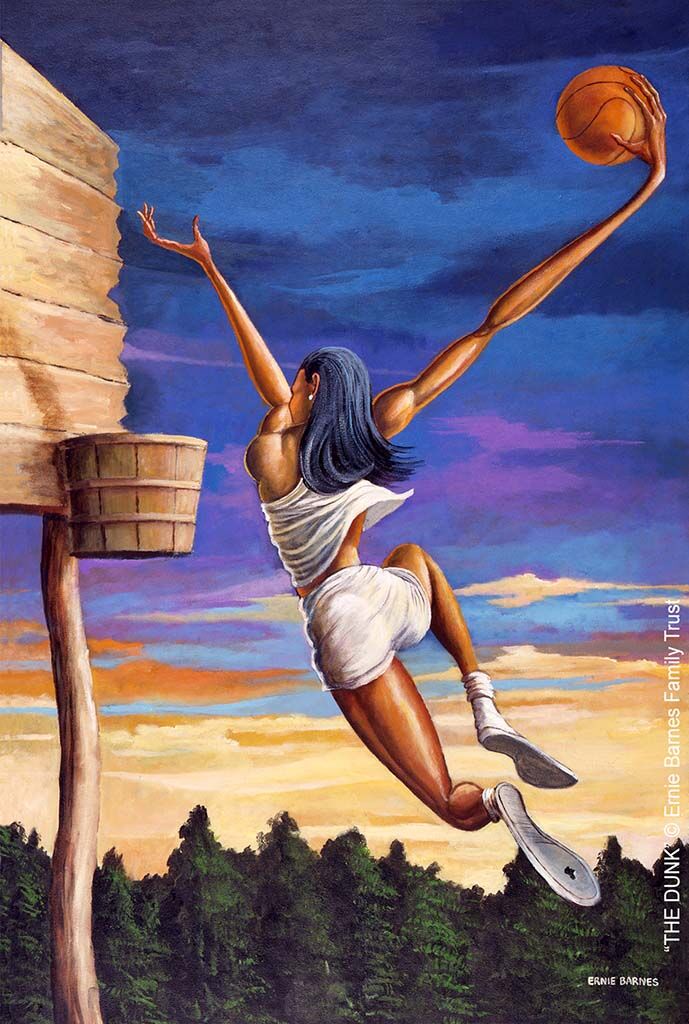 Paintings such as Marble Shooter (1969) and Three on Three (1999) illustrate Barnes’s skill at depicting fluid motion. The former portrays a crouching man preparing to shoot the bright red marble in his hand, while the latter shows a shirts-and-skins game of basketball between friends. Barnes depicts the players with such grace that they might be mistaken for dancers in a classical ballet. Barnes’s 1989 acrylic work Double Dutch similarly depicts a group of three friends jumping rope on the street, their long limbs sweeping across the canvas.
It’s no surprise that many of Barnes’s early collectors were other athletes. Rodriguez said that Barnes kept up with his former teammates and that many of them bought his work. Former NFL player Troy Vincent amassed the largest collection. Prominent musicians Bill Withers and Billy Davis Jr. became close friends and patrons as well.

Welcome to The Sugar Shack 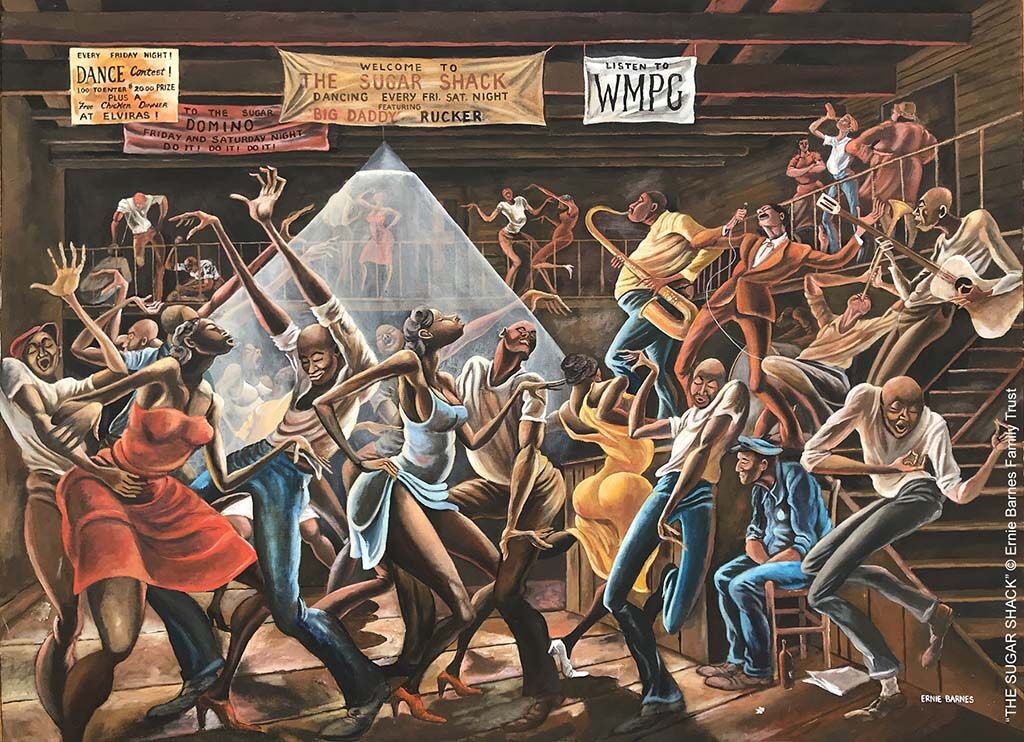 One of Barnes’s best-known works is The Sugar Shack (which he originally painted in 1971 and updated in 1976), a sensual and lively scene of Black men and women dancing to a jazz band in a nightclub. The women are clad in slinky dresses and heels, and moving languidly: their hips are mid-swing, their arms thrown in the air. Barnes was inspired by a childhood memory of sneaking into a rhythm-and-blues concert at North Carolina’s Durham Armory. It was the first time he’d witnessed adults moving so freely, and the sight stuck with him.
The Sugar Shack went on to adorn the cover of Marvin Gaye’s 1976 album I Want You. Barnes and Gaye were friends, and one day after a game of basketball, the soul singer saw the painting in Barnes’s car and fell in love with it. Though Barnes wasn’t initially thrilled at the proposal to transform his work into cover art, he ultimately consented. The vibrant painting also entered people’s homes and hearts when it was broadcast during the ending credits of the celebrated TV show Good Times. 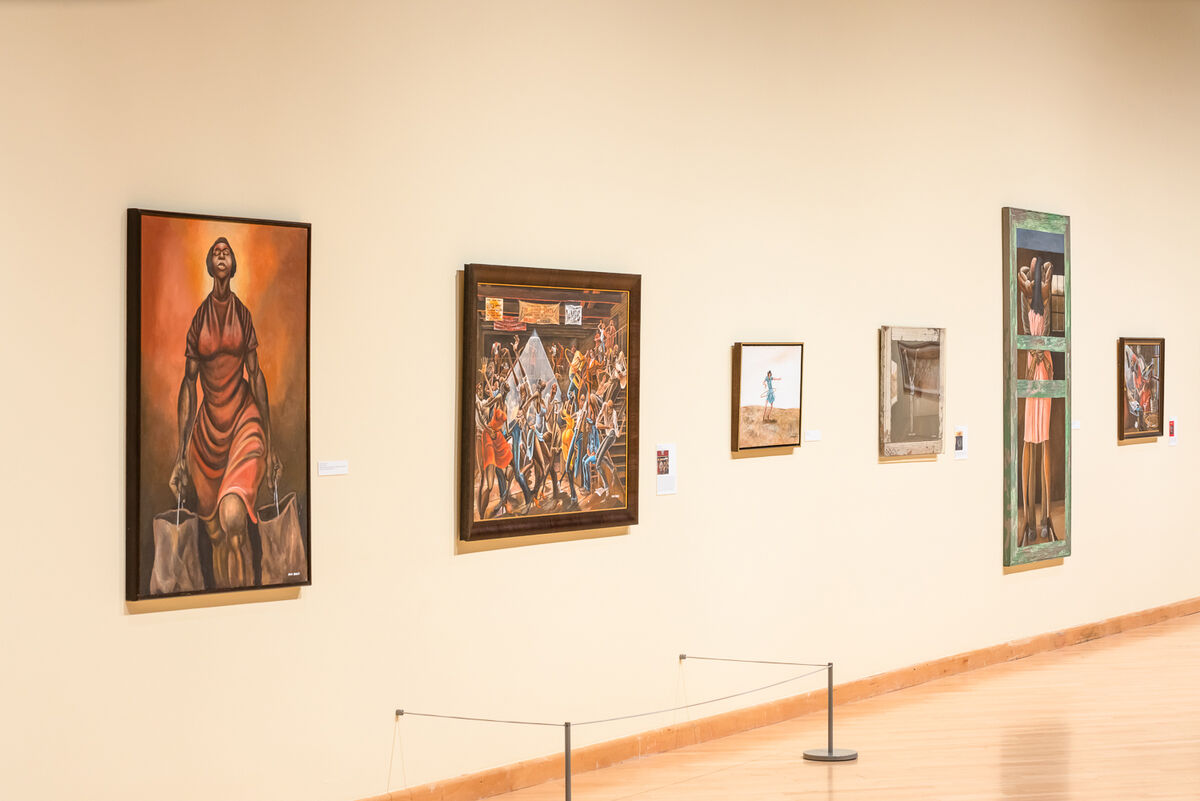 Though he’s remembered for jubilant scenes of pleasure and excitement, Barnes also integrated subtle forms of social commentary into his work. Bridget R. Cooks, curator of the Barnes retrospective at CAAM and associate professor of African American studies and art history at the University of California at Irvine, said that Barnes frequently depicted his characters with their eyes closed to represent the way that humans close ourselves off to one another.
“For him, it was a criticism of how people treat each other. He always said, ‘we’re blind to each other’s humanity,’” Cooks shared in a recent interview. “If we could see each other as humans, as people who have equal value, the world would be a different place.”
For example, in Sidewalk Scene with Graduate (1976), a young man in a black cap and gown saunters along a crowded sidewalk. Many of the figures’ eyes are closed, their heads turned slightly upwards with an apparent air of superiority. Each cluster of people appears deeply engaged in its own conversation. 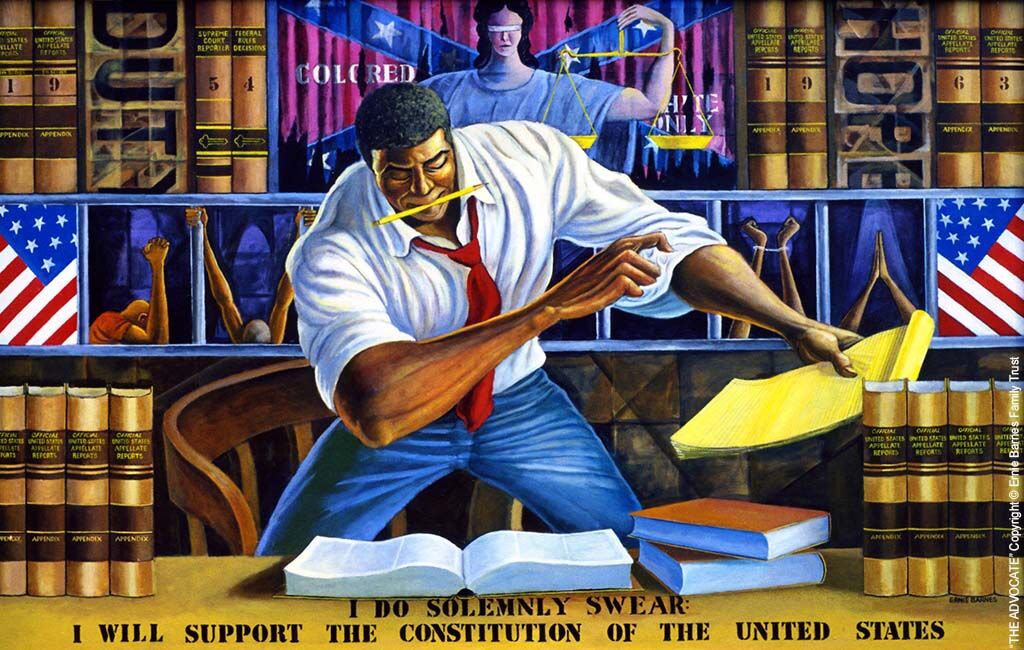 Rodriguez confirmed Barnes’s civic mindedness, adding that if the late painter were alive today, he’d be invigorated by today’s efforts for social change. “As someone born and raised during the Jim Crow era, with themes of social justice entwined in many of his paintings, I think he would see this time as a call to action,” Rodriguez said.
One of Barnes’s early exhibitions, “The Beauty of the Ghetto”—which opened in 1972 at Los Angeles’s Heritage Gallery and traveled for seven years—considered perceptions of race and poverty. It responded to the popular 1960s “Black is Beautiful” cultural movement, during which Black people in the U.S. encouraged each other to embrace and celebrate their identities. Barnes hoped the show would challenge viewers to think about people’s interconnectedness beyond constructions such as race and class. 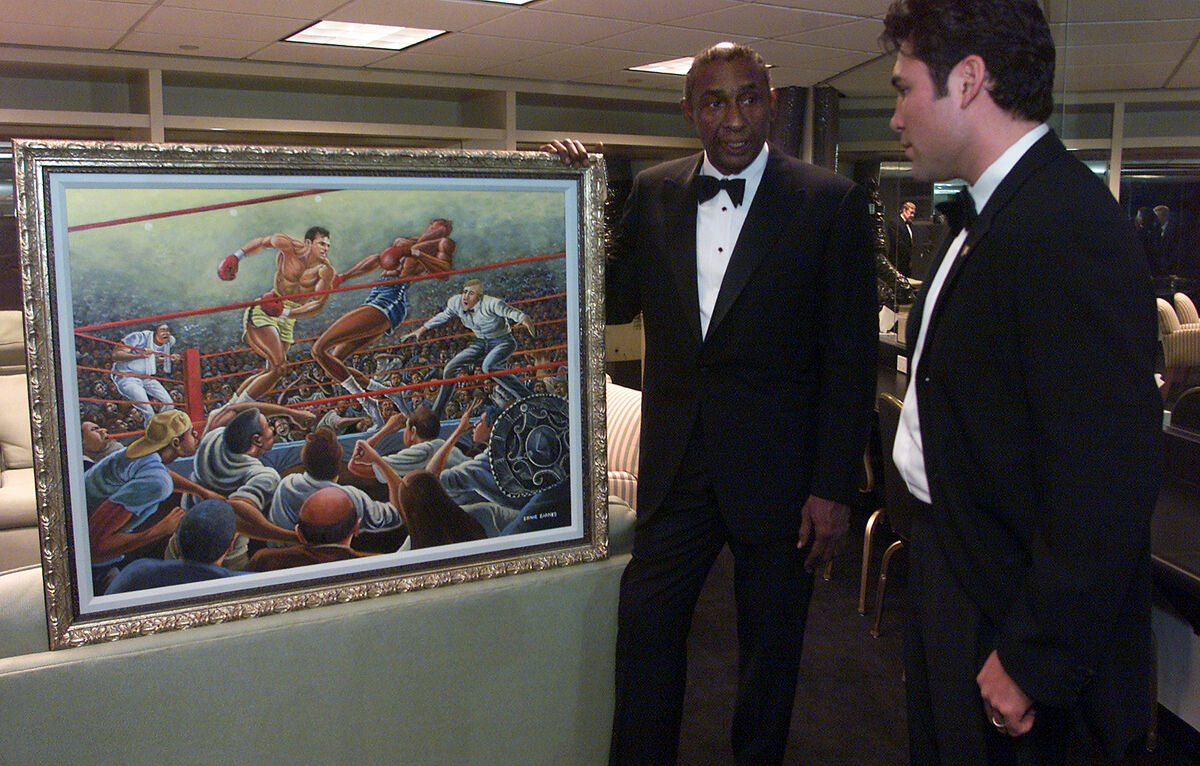 Barnes had a special connection to some of the greatest musicians and artists of his era, and his art is still heavily referenced in popular culture today. Graffiti artist
Dr Revolt
recreated The Sugar Shack for the cover of hip-hop duo Camp Lo’s 1997 album Uptown Saturday Night. In 2016, vocal artist Anderson .Paak staged a music video for his song “Come Down” that brings Barnes’s The Sugar Shack painting to life.
Cooks said that in some ways, Barnes’s paintings, especially The Sugar Shack, really belong to everyone. “Many of us grew up with this painting. It really felt like it was part of our development. Growing up in the ’70s and ’80s, we didn’t have very many opportunities to see Black people on TV,” Cooks explained. Barnes’s work celebrates the exuberance of community and everyday life. His paintings provided visibility for many at a time when representation was hardly a priority.
Daria Harper
Correction: A previous version of this article stated that the date was unknown for Barnes’s work “Sidewalk Scene with Graduate”; the work was made in 1976. The text has been updated.
Related Stories