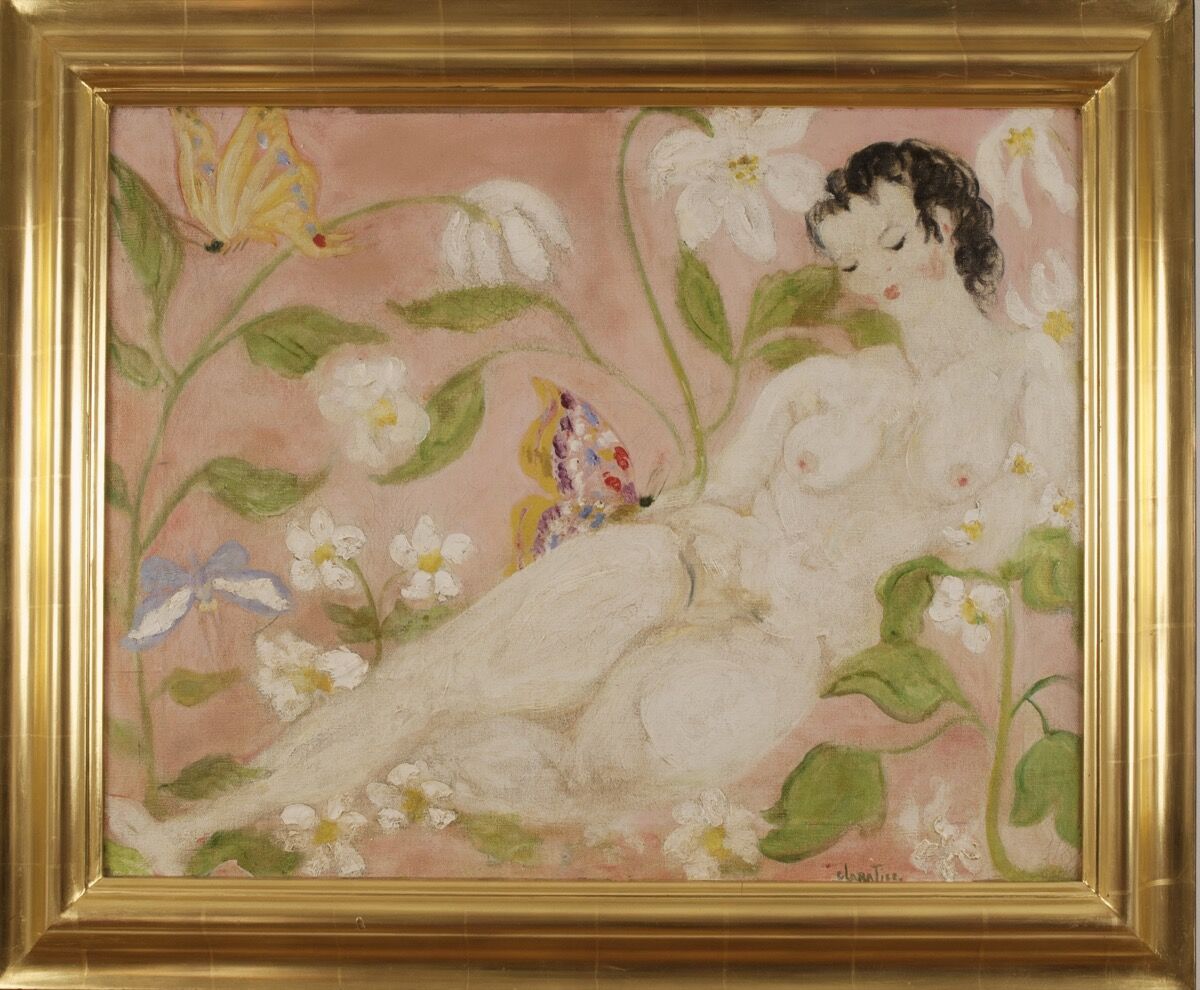 When the artist Clara Tice first showed her nudes—paintings and drawings depicting the sinuousness and lyricism of the human form—she wasn’t expecting to make enemies.
It was March 1915, and members of Tice’s bohemian Greenwich Village community had organized an exhibition of her work at one of their preferred watering holes: Polly’s Restaurant. While the show began as an early outing of a young, unknown artist, it became an overnight sensation when it caught the eye of Anthony Comstock, the head of the Society for the Suppression of Vice, a morality squad backed by the YMCA and other moneyed donors interested in moral reform.
(The group sought to eradicate “every obscene, lewd, or lascivious book, pamphlet, picture, paper, writing, print or other publication of an indecent character” in New York City.)
In a surprise raid, Comstock—nicknamed “Simon Pure” by those he targeted—attempted to seize Tice’s nudes. Luckily, the artist’s friends had gotten wind of the impending crusade and removed the artworks just an hour before Comstock could snatch them away and add them to his “unrivaled collection,” as Tice sarcastically referred to his trove of confiscated works. The next day, Tice and her risqué work were the talk of downtown Manhattan.
“Clara liked to say that Comstock was her best publicist,”
Dada
scholar and dealer Francis Naumann tells me, as we flip through Tice’s unpublished autobiography. Naumann and his wife, fellow scholar Marie T. Keller, have written extensively on Tice, and are two of several champions of the late artist, who was all but written out of history books until recently (along with other female Dadaists, like
Beatrice Wood
and Mina Loy, who worked alongside
Marcel Duchamp
in the early 1900s).
“Most women who were part of the New York Dada group were pushed off into the periphery of scholarship,” continues Naumann. “It’s hard to believe, given what a sensation Tice’s work was in her time.” 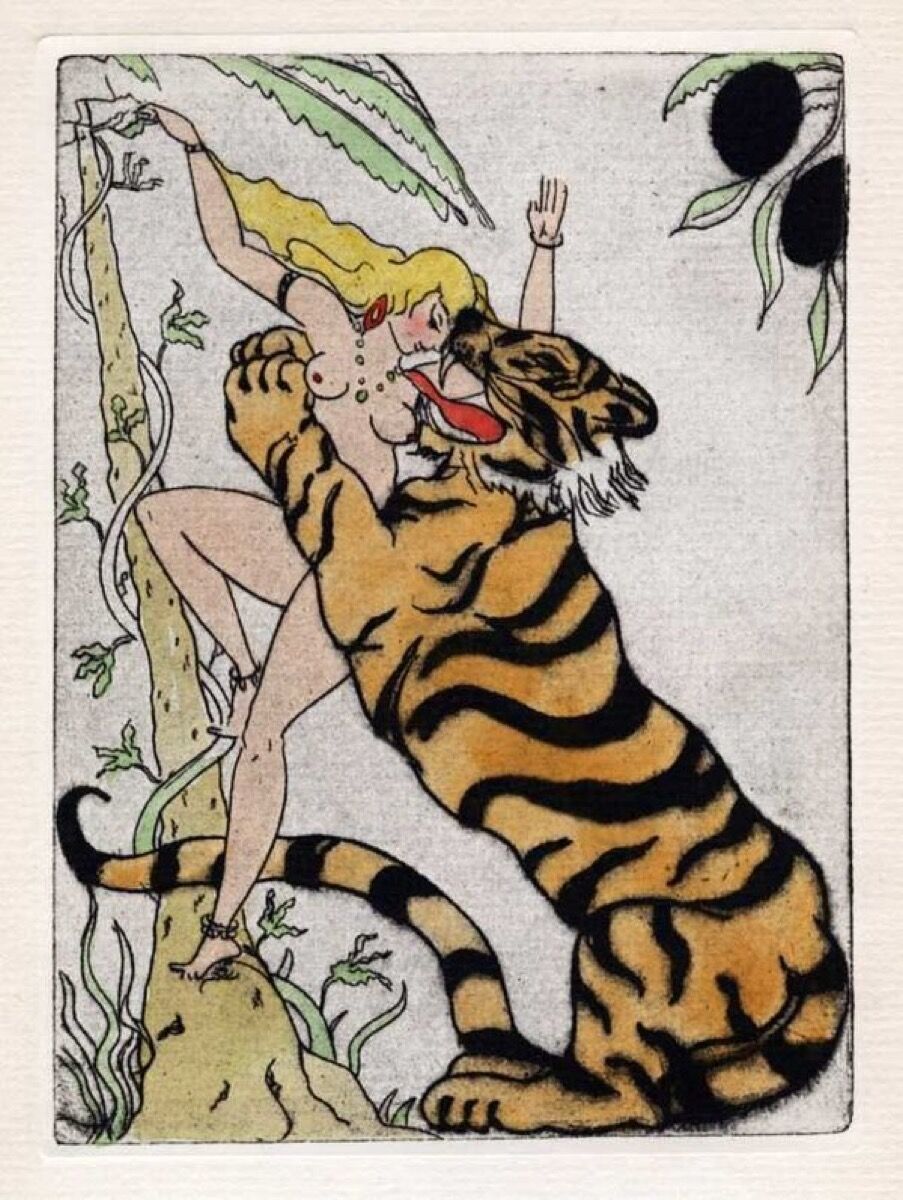 Clara Tice, from her Candide series (1927). Image via Honest Erotica. 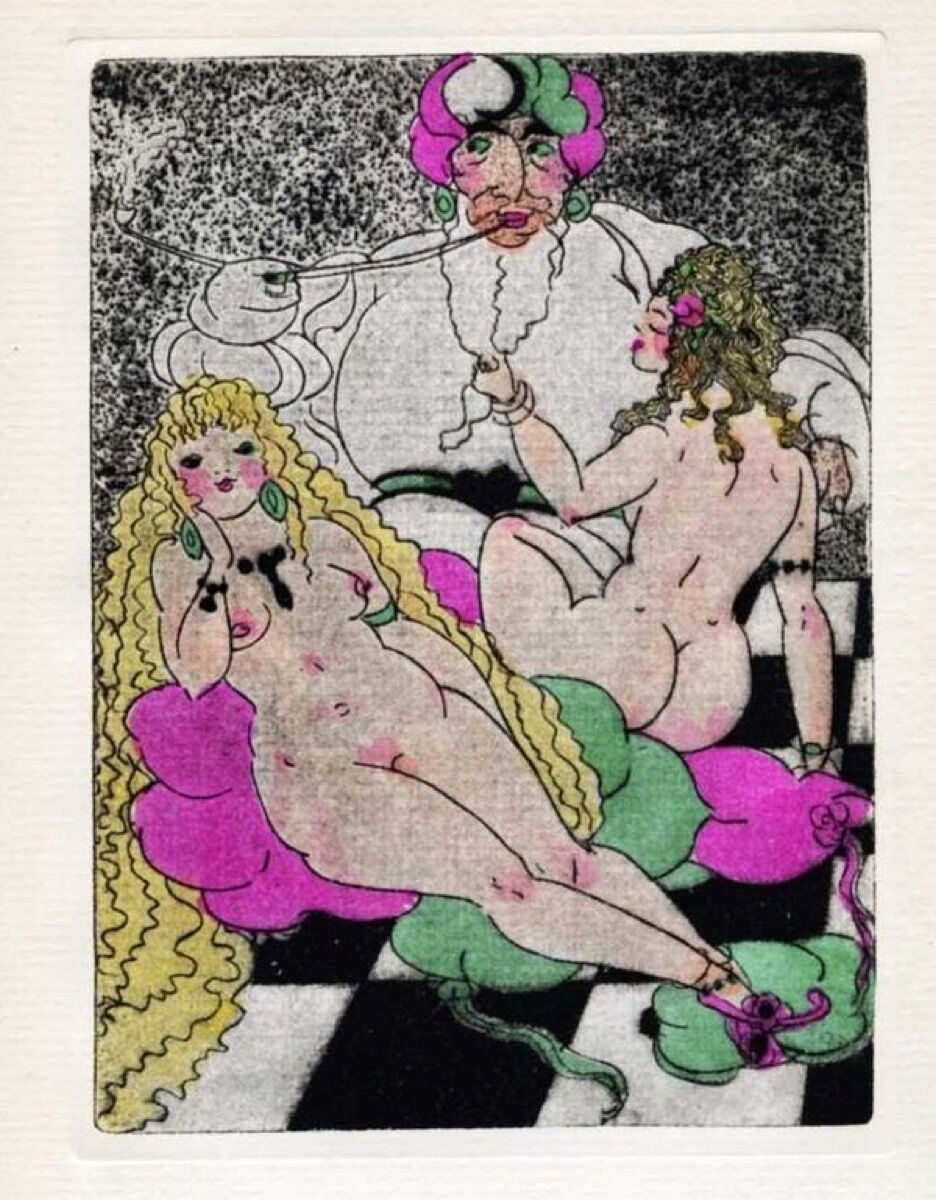 Clara Tice, from her Candide series (1927). Image via Honest Erotica.

Tice was born in 1888 in Elmira, New York, on the border of Pennsylvania, but not long after, she moved to New York City with her family. She grew up above the lodging house for homeless children where her father worked, and was raised primarily by her good-humored, liberally-minded mother, who encouraged Tice’s creative instincts from a young age.
Thanks to her parents’ laissez-faire, progressive approach to child-rearing, as Keller points out in her essay on Tice in Women in Dada: Essays on Sex, Gender and Identity (1998), the budding artist “encountered none of the familial obstacles usually imposed upon a young woman of that time eager to pursue an artistic career.” By her late teens, Tice had enrolled in Hunter College, but she left after celebrated painter
Robert Henri
accepted her as one of the rare female students he took under his wing.
In Henri’s Greenwich Village school, Tice began to develop the fluid style she became known for, depicting female and male nudes and other lively, rhythmic creatures like birds, afghans, and butterflies that filled her bohemian life. When Henri and several other established artists of the day organized the first exhibition of Independent Artists in 1910, Tice showed a whopping 21 works. But it wasn’t until the 1915 exhibition at Polly’s, and the controversy it stirred, that Tice skyrocketed to New York fame.
While Tice admitted that she worried “a bit over Mr. Comstock’s pronouncement of my work as ‘obscene,’” she was generally unfazed by criticism—and responded with typical gusto, wit, and her wry sense of humor. “I have never heeded academics and critics with their set rules and formulas attempting to limit the freedom of the artist, forcing him to follow the ‘old masters,’” she wrote in her autobiography.
In response to Comstock’s crackdown, she and gallerist Guido Bruno also organized a performative mock trial in which Tice would be “tried and therefore acquitted of the charges of having committed unspeakable, black atrocities on white paper, abusing slender bodies of girls, cats, peacocks, and butterflies,” as the delightfully sarcastic announcement for the event, written by Tice, stated.
News of the performance was also published, along with reproductions of Tice’s nudes, in the then-budding magazine Vanity Fair, whose editor, Frank Crowninshield, had become a passionate fan of Tice’s work and later anointed her “the queen of Greenwich Village.” 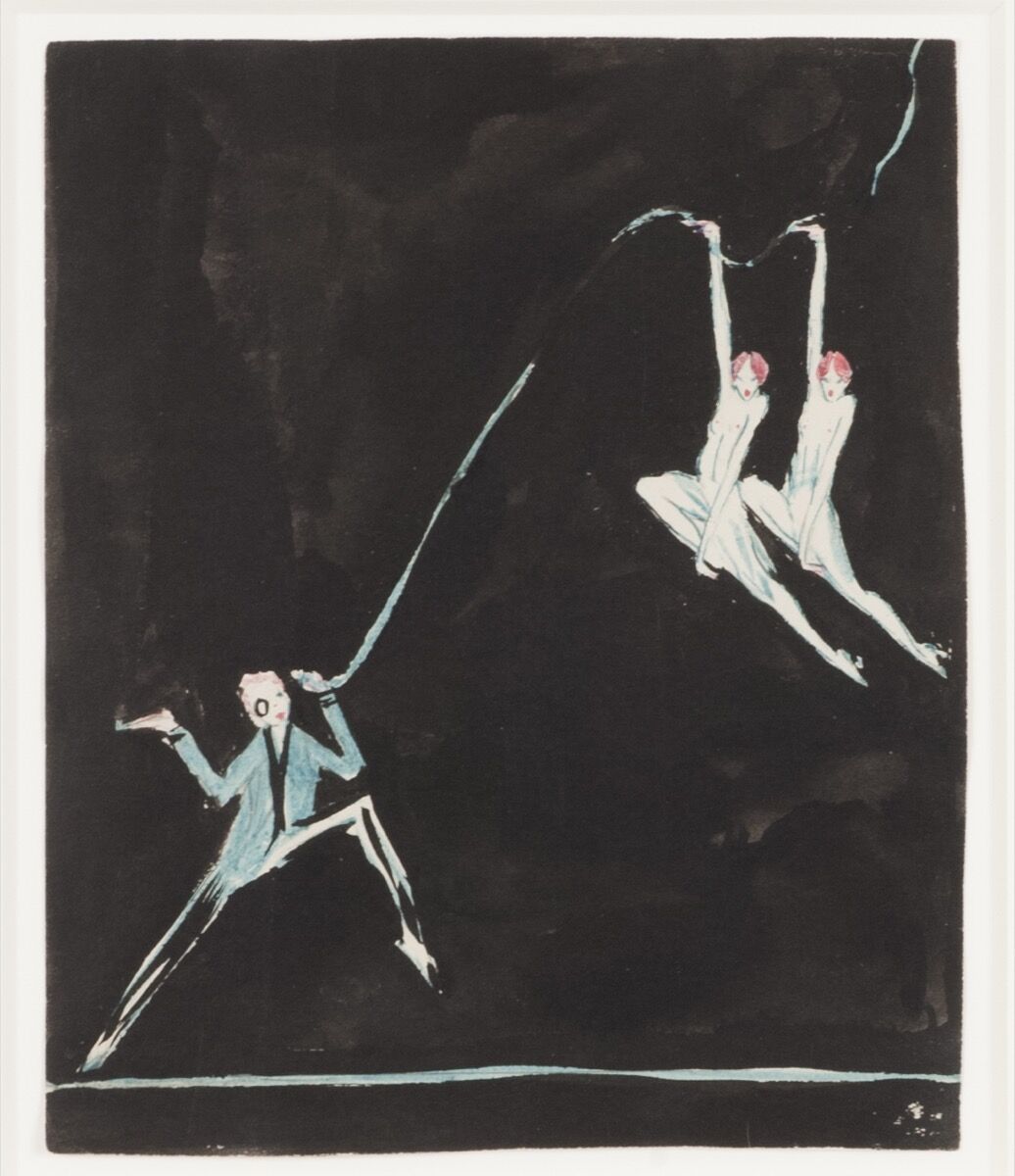 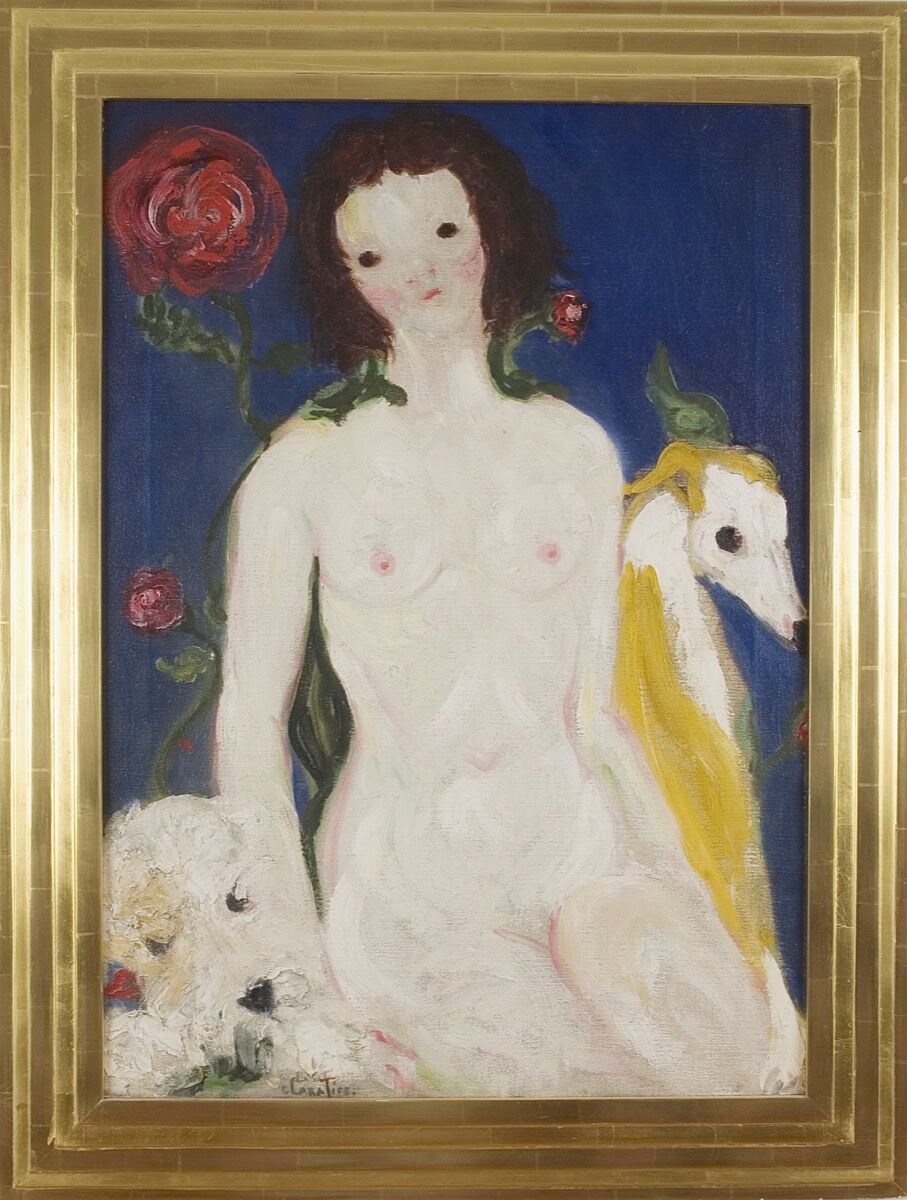 Advertisement
Tice’s drawings began to appear in both very avant-garde and very mainstream publications across New York and, in some cases, the country. According to Naumann, The World, the Chicago Tribune, The Sun, The Globe, the New York Times, Vanity Fair and others ran her illustrations and comics, including whimsical illustrations of operas, ballets (one stunning 1916–17 drawing shows the sculpted, nude body of the male dancer Vaslav Nijinsky in Serge Diaghilev’s L’Après-Midi d’un Faune), and even sports events.
“Clara Tice is the only woman, to my knowledge, who ever drew for a sports page,” wrote Mrs. Bobby Edwards in a popular New York newspaper column in 1949. “Her prizefighters, baseball pitchers, etc. appeared for years in the St. Louis Star.”
She also contributed a children’s serial cartoon, “Lucy Lou, the Kangaroo,” to another New York paper. The piece tracked the adventures of Lucy as she encountered different animals (favored subjects for Tice throughout her work—she owned some 12 dogs over the course of her life). The Blind Man, a Dada journal run by Dada artists Duchamp, Wood, and Henri-Pierre Roché, also ran Tice’s work, confirming her place in their bohemian circle.
She became a regular at the famed salons of Dada patrons Walter and Louise Arensberg, and attended and designed the posters for Greenwich Village’s fancy dress balls, wild parties with names like “Insect Frolic” and “Pagan Rout” that often ended in participants shedding their costumes and frolicking in the buff.
These events, as well as the live models she worked with, informed her nudes, which were her most talked-about works (and which she continued to make until she passed away, in 1973).
In the 1920s, for instance, Tice painted a spellbinding mural for a swanky new restaurant, the Fifth Avenue Club, populated by 45 cavorting nymphs rendered in silver and gold. “It was so spectacular,” Keller writes in her essay, “that Heywood Broun, sitting beneath her exotic painting, altered his customary beverage order. Sending back the beer, he proclaimed: ‘Under that mural, I can drink only champagne.’” 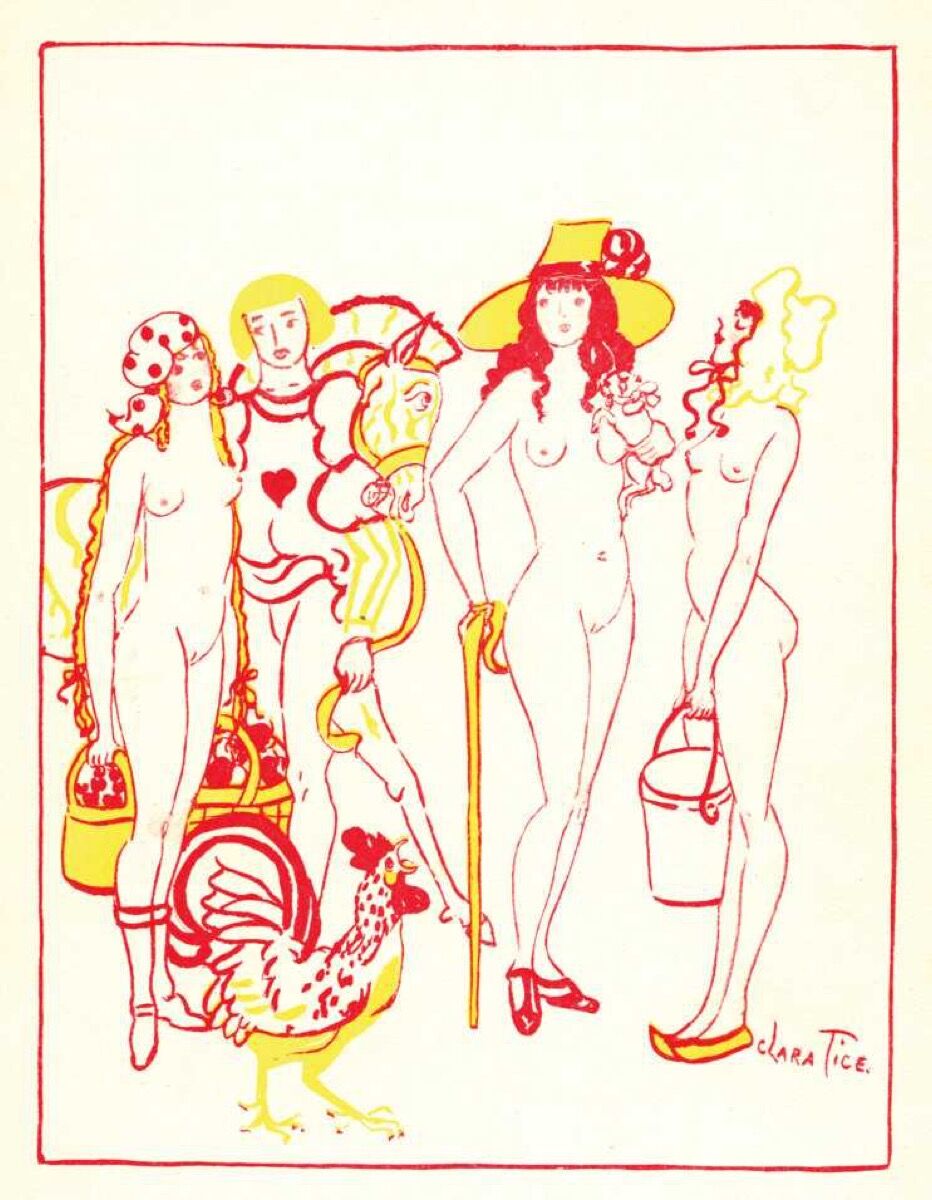 Clara Tice, from The Adventures of King Pausole series (1926). Image via Honest Erotica. 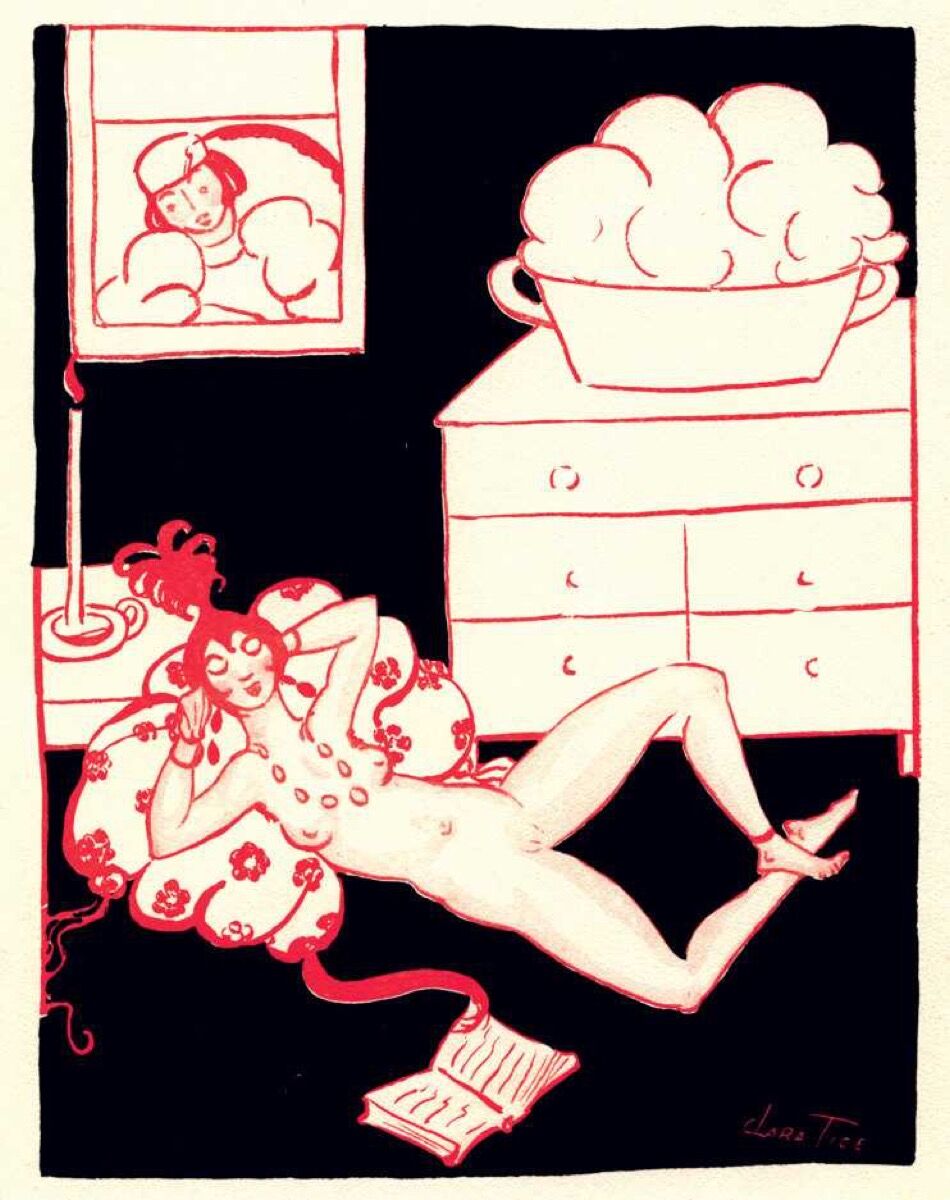 Clara Tice, from The Adventures of King Pausole series (1926). Image via Honest Erotica.

Around this time, she also illustrated a series of books for the Pierre Loüys Society—including One Hundred Merry and Delightsome Tales, The Decameron, Candide, The Adventures of King Pausaole (1926)—with erotic drawings. In them, women lounge naked and supine, engaging in all manner of earthly pleasures: caressing others, playing flutes, making cartwheels, eating strawberries and plums. Their bodies are curvaceous, strong, and full of life.
More than erotic activities, though, Tice’s body of work harnessed the unbridled energy, experimentation, and freedom of the community that surrounded her. “It was literally a dream world, where anything could happen—and almost always did!” she wrote of Greenwich Village.
“Unlike most American artists, she not only paints life but feels it; feels it intensely and poignantly; especially its happiness, its humor, and its fantastic gaiety,” Vanity Fair editor Crowninshield gushed of her work in the intro of her autobiography. In his view, Tice’s virile, vibrant figures coursed with her own independent spirit and passion.
“This young artist has discovered a great truth,” he wrote, “namely, that any work of art which is conceived with the sole idea of pleasing a patron, has a way of dying still-born; whereas, if it were only designed to delight the creator herself, it has already gone a considerable way toward immortality.”
Tice confirmed his impressions in her own reflections: “There are two great joys of the artist which make him more self-sufficient than anyone else: They are the grueling ecstasy of creation, and the realization that one’s artistic productions will be a constant source of delight and pleasure, to the creator—if no one else.”
Yet during her lifetime, the artist’s work was a source of pleasure for many, not just Tice. And now, as a growing number of scholars advocate for the importance of her sensuous paintings and illustrations to the New York Dada movement, the hope is that Tice’s practice will delight for many years to come.
Alexxa Gotthardt
Related Stories