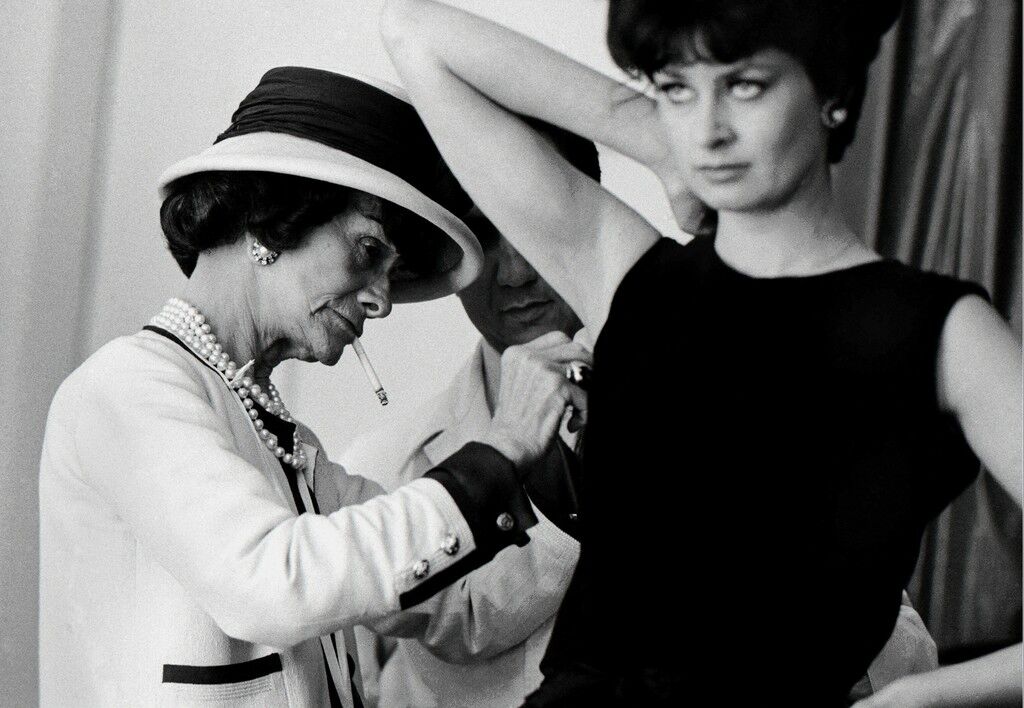 Douglas Kirkland
Coco Chanel Paris, 1962
Opera Gallery
The precursor of the “little black dress” was anything but little. Queen Victoria’s mourning dresses—which she donned every day for 40 years following the death of her husband, Prince Albert—were sumptuously designed with layers of thick, floor-trailing fabric. Although black was associated with mourning as early as the 14th century, during the Victorian period the practice became standardized. Grieving Victorian women would trade their frills for heavily trimmed black dresses, the more ostentatious, the better. (The pricier the mourning outfit, the more you missed your dead loved ones—or so the thinking went.)
With the start of World War I almost a century later, it became more difficult for women to uphold this lavish dress code. The Illustrated London News reported in June 1918 that “there is not a single person who is not suffering family and financial losses that make display and frivolous expense seem like folly.” Rather than abandoning black entirely, however, women referenced spreads in Vogue starting in 1916 and 1917 that detailed appropriate mourning-wear during times of shortage. Hemlines began to rise, and veils now framed the face instead of covering it. And then, in 1926, black was suddenly liberated from its ties to death. Vogue featured a sketch of
Gabrielle “Coco” Chanel
’s black crêpe de chine sheath with the caption “The Chanel ‘Ford’ – the frock that all the world will wear.” Henry Ford’s Model Ts were black to expedite the assembly process, since black paint dried more quickly than other hues. In 1909, before Model Ts occupied garages across America, Ford allegedly quipped: “Any customer can have a car painted any color he wants, so long as it is black.” Together, the frock that all the world would wear and the car that all the world would drive helped to modernize the color black.
“It was quite a cultural shift,” says Hazel Clark, professor of design studies and fashion studies at the New School’s Parsons School of Design. “From black only being worn in the 19th century, essentially as the color of mourning, it is a very, very significant shift in the way that the color black came into women’s wardrobes in the 20th century and stayed there.”
Following the introduction of Chanel’s revolutionary design, the little black dress as we know it today quickly became a wardrobe staple. Ten of its most iconic iterations are currently on view at the Museum of Modern Art, as part of their exhibition Items: Is Fashion Modern? “As design, [fashion] exists in the service of others,” says Paola Antonelli, senior design curator of the department of architecture and design at the museum. “In most cases, it is designed by a human being to dress others—sometimes many, many others—so they can function in the world, in different arenas.” 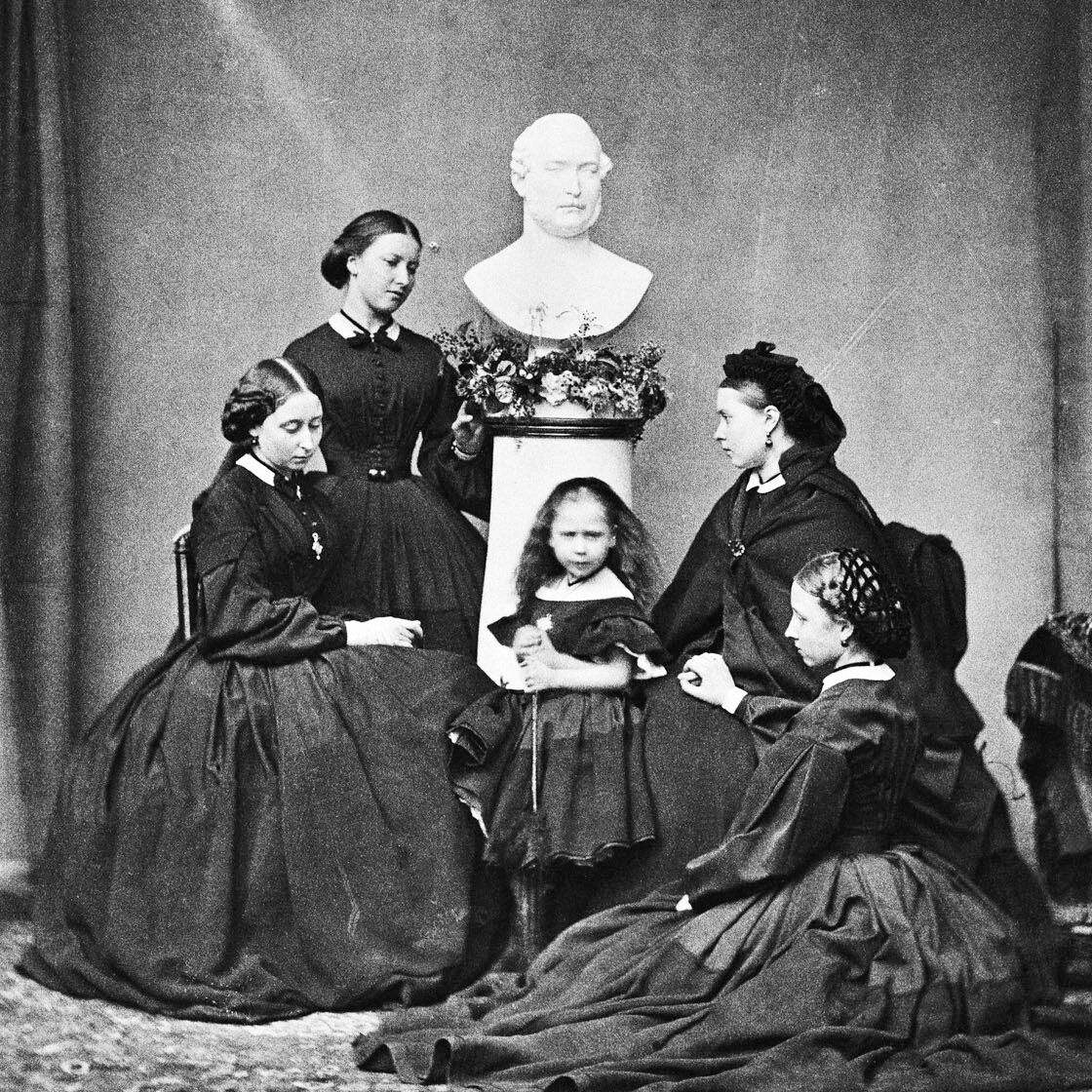 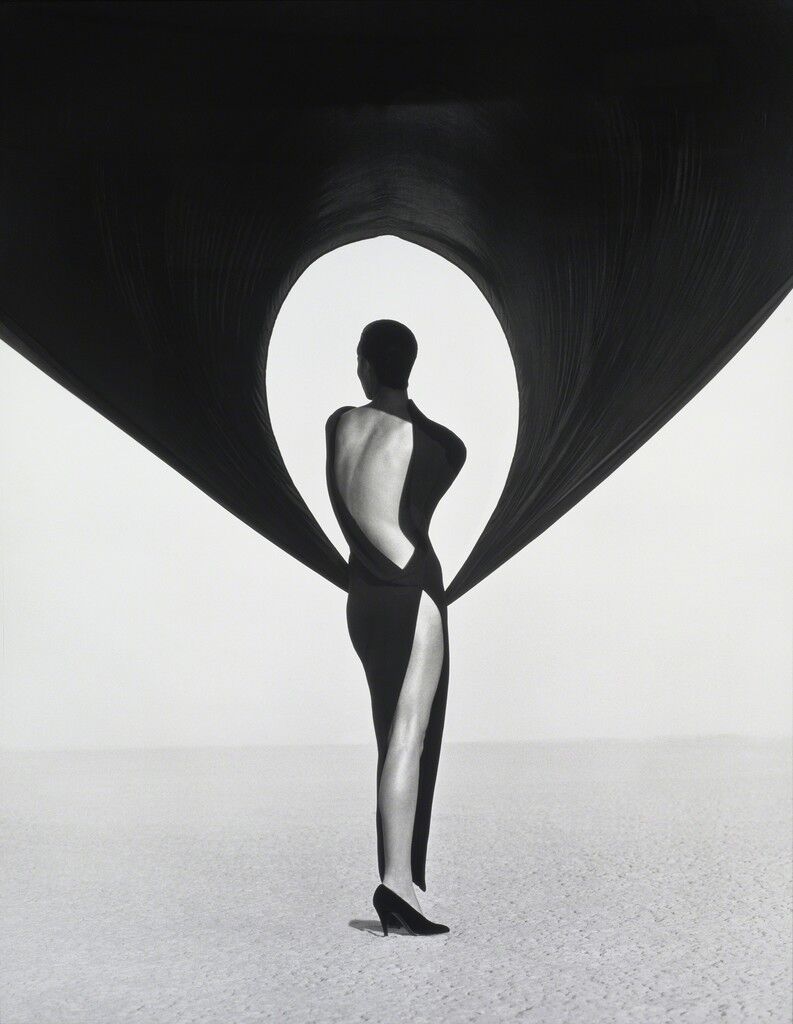 Herb Ritts
Versace Dress, Back View, El Mirage, 1990
"Herb Ritts" at Museum of Fine Arts, Boston
Advertisement
MoMA’s series of little black dresses offers clues to the various arenas women have inhabited throughout the last century. Chanel outfitted the new women of the Jazz Age in black shift dresses, cloches, and long strands of pearls. But the advent of a second world war saw styles shift once again—Charles Creed’s black utility dress of 1942 reflects the frugal wartime sensibility that influenced designers. Women were put to work, and their garments became more practical and conservative to accommodate these new lifestyles.
When the war ended and women were ushered back into the home, the little black dress went ultra-feminine with
Christian Dior
’s “New Look.” The fabric required for the skirt, which boasted layer upon layer of petticoats, could have been used to fashion as many as 15 wartime skirts—a fact critics used to label the design unpatriotic. With more supporters than naysayers, though, Dior successfully created an exaggerated hourglass silhouette that clothed the women of the 1950s.
But there is perhaps no little black dress more famous than that of Audrey Hepburn in Breakfast at Tiffany’s (1961). For the costume, designer
Hubert de Givenchy
discarded Dior’s petticoat, extended the hemline to the floor, and completed the look with a tiara and pearl necklace. Givenchy and Hepburn, who developed a close friendship, would collaborate on a number of designs over the course of their successful careers. With other high-profile clients, including Jackie Kennedy and the Duchess of Windsor, Givenchy’s designs became enduring portraits of classic, timeless elegance; the women who wore them are regarded as fashion icons even today. 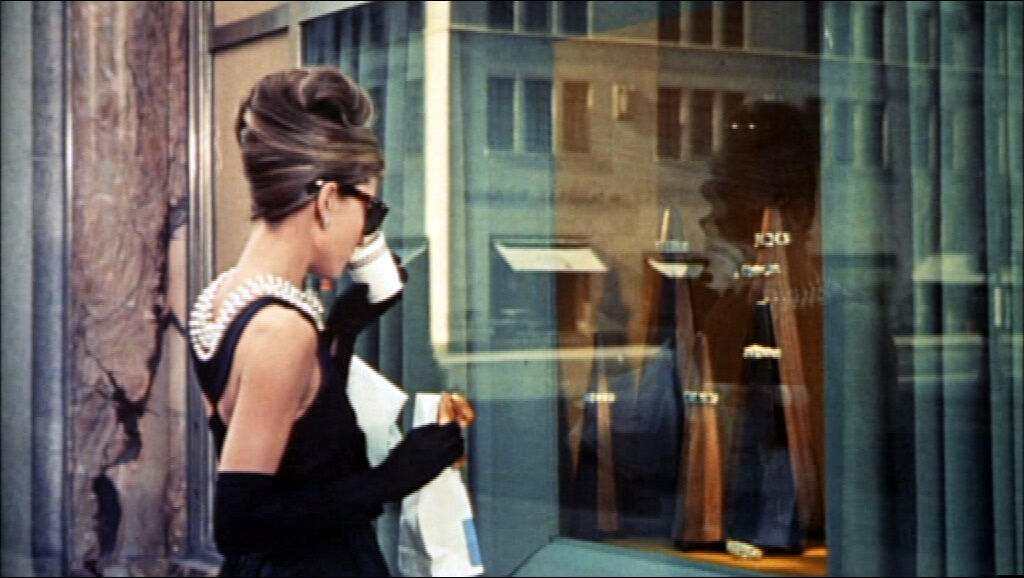 Audrey Hepburn in Breakfast at Tiffany’s. Image via Wikimedia Commons.

Decades after Givenchy and Dior’s demure designs, Gianni Versace deconstructed the little black dress and put it back together with thick, oversized gold-painted safety pins. Much in the way that Hepburn made Givenchy’s design iconic, Elizabeth Hurley sensationalized Versace’s dress by wearing it to the 1994 premiere of Four Weddings and a Funeral alongside her then-boyfriend, Hugh Grant. The dress, featuring a plunging neckline and a thigh-high slit, appeared as if it was being held together only by gold hardware—a provocative look that has since been emulated by everyone from Angelina Jolie to Lady Gaga.
The most recent LBD (as it is known colloquially) on display at MoMA brings the evolution of the fashion staple full circle. The Little Black (Death) Dress—commissioned by the museum specifically for the show—is designed “to carry one from this world to the next, a garment literally created for the grave,” explains its creator, Pia Interlandi.
Interlandi works with the terminally ill to design garments that they will be buried in, typically using white and cream fabrics. When MoMA first approached her to contribute a design to the little black dress series, “The first thing that I thought was, ‘Oh! I don’t usually design with black,’” she says. “But in tracking back the evolution of it, I went further back, I went back to Victorian mourning because black is so much associated with death.” Interlandi’s final design focuses on the family dressing the deceased, rather than the deceased themselves. By incorporating thermochromic ink, which changes color based on temperature, handprints linger on the garment for several moments after contact is lost. “It is that tangibility that is really emphasized,” she notes.
While certain wardrobe staples like the plain white tee or the leather jacket have, of course, been subject to design variations since their creation, the original prototypes are the ones that stand the test of time. Every generation has seen more or less the same white Hanes T-shirt for over a century, after all. But the little black dress is different. From Queen Victoria to Audrey Hepburn to Lady Gaga, its evolution uniquely reflects the time in which it was made.
Sarah Dotson is Artsy’s Managing Editor.
Related Stories