If
Henry Taylor
has created his Guernica, he said, it is Ancestors of Genghis Khan with Black Man on Horse. Painted between 2015 and 2017, Taylor’s monumental work—like
Picasso
’s modernist greyscale masterpiece from 1937, a response to the bombing of the Basque town it’s titled after—is an epic indictment of violence, chaos, and the suffering of a people.
Taylor’s painting, which hung at the 2017 Whitney Biennial, is a mix of fact and fantasy. With a palette of primary colors, the 60-year-old, Los Angeles-based artist loosely chronicles the killing of his grandfather, a horse trainer and draftsman, in East Texas in 1933. There’s a coffin and patches of cotton, which are meant to remind us that he was a black man during the Depression who made a conscious choice not to pick cotton; a prison, alluding to the social deaths of so many black men; two women of Asian descent; horses running wild; and a Christ-like black man in the center. The painting is signature Taylor: a deeply emotional, defiant, and empathetic portrait of blackness, laced with metaphor and rich in color, that seems to show both the mundane and extraordinary at once.
“There are bombs dropping everyday,” said Taylor, as we discussed Guernica as a way to unpack how he paints what he sees, and his own history. (The artist was in New York to celebrate his receipt of the 2018 Robert De Niro Sr. Prize.) “It’s just the way I was taught,” he said. “I was reassured: ‘Don’t doubt what you see.’” 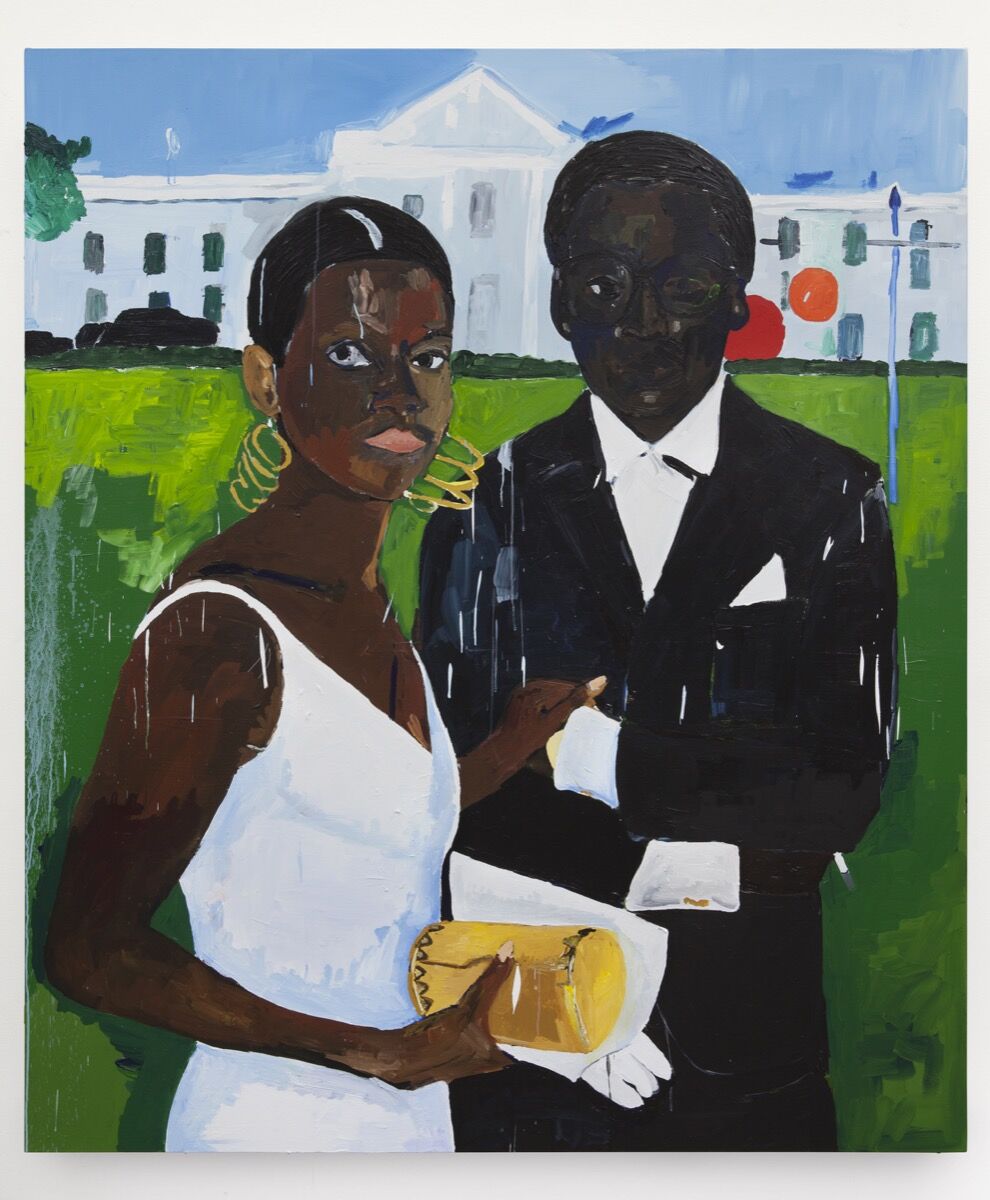 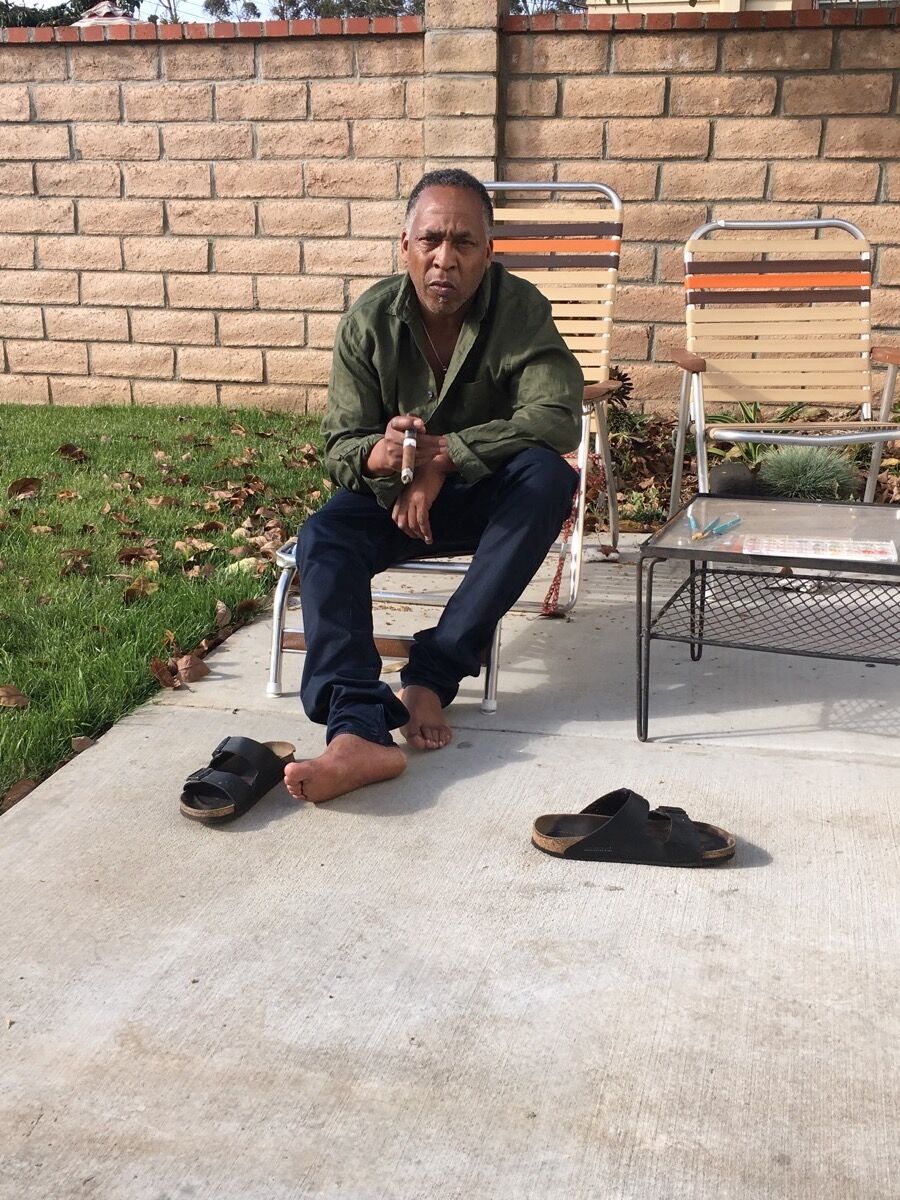 That doesn’t mean simply painting directly from life, though—not exactly. “Other people are too rational when they paint,” Taylor added. “I don’t believe in being rational—that might have to come later.” He stretched the metaphor a bit, comparing painting to architecture: “There’s structure in building a house, but in a painting you can make some shit up,” he said. “I just try to put down what I see. It’s almost like telling the truth. Sometimes people don’t know what the truth is!”
The first portrait Taylor ever created was an etching made in 1978 when he was a 20-year-old college student. He now calls it “naive.” But since graduating from Cal Arts in his mid-30s, he has found what he called “the truth” in the faces of friends; his mother, in Cora’s (2016); and fellow artists like
Deana Lawson
and
David Hammons
, whom he considers influences on his own art (along with an eclectic group that includes the Hernandez brothers,
Bill Traylor
, and
Goya
). He’d also painted black icons from pop culture and history, like Jay-Z and Alice Coachman. In Cicely and Miles Visit the Obamas (2017), we find the actress Cicely Tyson and jazz legend Miles Davis posed in front of the White House, the composition partially borrowed from a 1968 photograph.
Yet unlike
Kerry James Marshall
or the late
Barkley L. Hendricks
—two painters of black life the artist is often compared to—Taylor is primarily drawn to the outcast. His focus is on the women, men, and sometimes children who are cast aside by society; those no one is supposed to care about, no less want to see honored in paint. Taylor has painted and drawn them anyway. For instance, there are many images, such as Catatonic (1991) and Split Person (1992), of the psychiatric patients he cared for during a decade-long stint working as a technician at Camarillo State Mental Hospital. 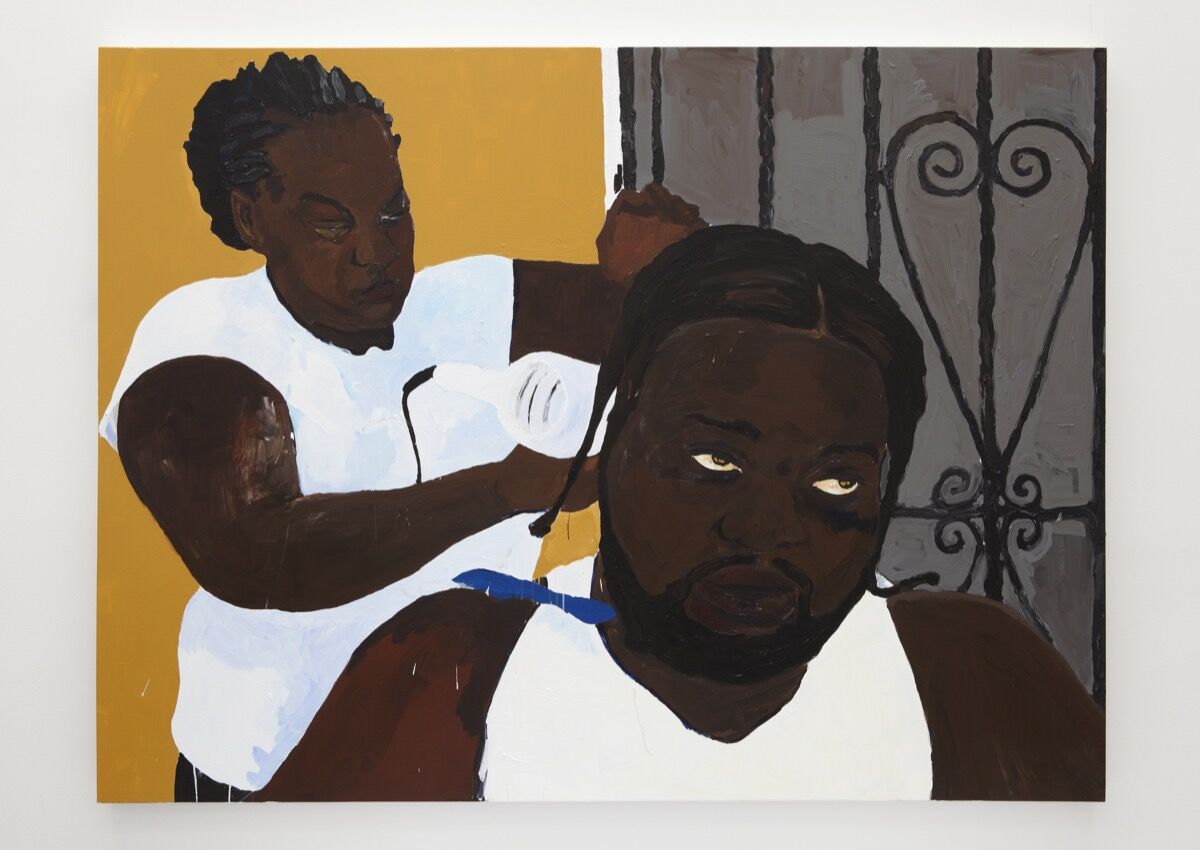 Advertisement
He doesn’t make a concerted effort to show his subjects in their finest moments; Taylor isn’t concerned about conforming to popular understandings about the way to properly depict a black person (empowered!). He paints his people the way they are, in all of their difficulties, simply asking that we see them. Gettin It Done (2016), a scene of a black man sitting on a stoop getting his hair braided, shows that his subjects don’t need to be dressed up, imperious, or set against a background of wealth to matter—they matter because they are here, and they are human. Marshall has used his canvases to largely confer glory and status onto the middle-class black figure in Western painting; Taylor has applied that logic of social realism to the poor, fallen, and forgotten. His studio is on Skid Row in downtown Los Angeles. There, he has “found his way into the paint, and the pain,” as Rachel Kaadzi Ghansah put it recently in the essay “Henry Taylor’s Wild Heart Can't be Broken,” included in the artist’s forthcoming—and first—major monograph.
“I pull my people off the damn street!” exclaimed Taylor. “I’m on Skid Row, and I’m looking at people all the time. Brothers walking around with no shirt, collecting bottles and cans.”
“I know when I paint a brother off the street, I’m painting more than just this brother,” the artist added. “He becomes more than just a sitter. I asked the last brother that came up to my studio, ‘What’s your name?’ He said, ‘No, no, don’t put my name! This is a period when I’m down. I’m on Skid Row!’ I told him it’s about respect, because I respect all these people. It’s a two-dimensional surface, but they are really three dimensional beings.” 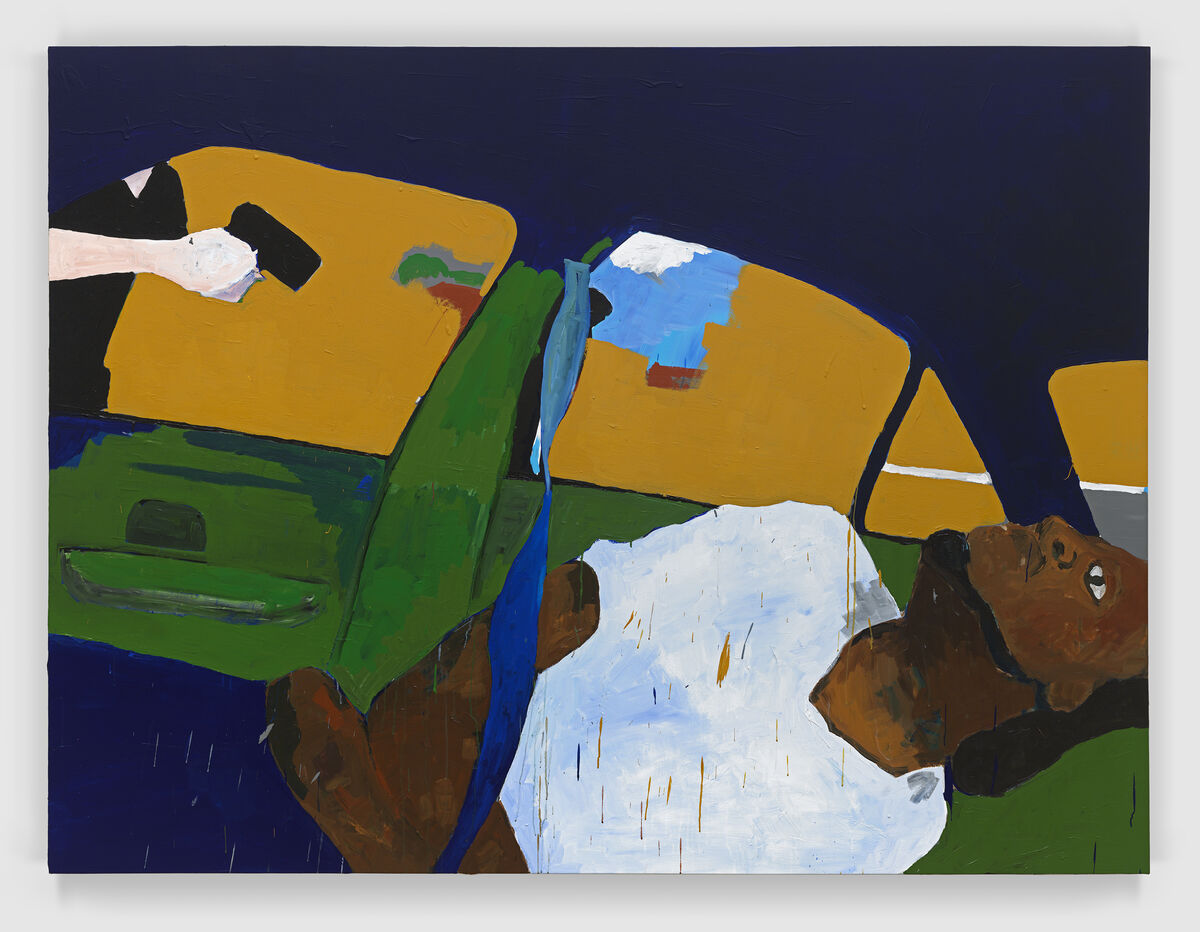 That dignity and respect runs deep. Food (2016), for instance, is titled after a sign a homeless man is holding baring that single word as he makes his way through traffic. Taylor has also captured more infamous images of everyday suffering: Another work, The Times They Ain’t A Changing, Fast Enough! (2017), included in last year’s Whitney Biennial, captured the dying body of Philando Castile, a black man shot by police while his girlfriend and daughter were in the car alongside him. “It has to hit me,” Taylor said. “I’m not searching for every death, but sometimes I get mad. And you see that, I was mad.” At the same time, there’s room for the quotidian and the joyful; The Floaters (2017), a depiction of Taylor and a friend adrift in a swimming pool, was displayed on New York City’s High Line during the 2017 Whitney Biennial.
The world moves fast, but Taylor paints just as swiftly; he’s prolific, and it can seem like he never stops working. “Some people do research, some people just come from right within themselves,” the artist said of the pace at which he creates. “I think I got enough inside of me.”
Since a pivotal residency and solo exhibition at MoMA PS1 in 2012, Taylor has emerged as one of the leading contemporary figure painters today, in part because of his insistent need to paint all of the time. This hyperproductive compulsion has led him to make work on any and every surface he can find, from cardboard to suitcases and bottles. (He used to take paint supplies along to openings, he has said, because he simply could not put down his brush for that amount of time.) Taylor believes there is something about in-the-moment, immediate painting that allows him to improvise and capture people on the fly as they are or how he imagines them to be. “This allows me to be free on the canvas,” he said. 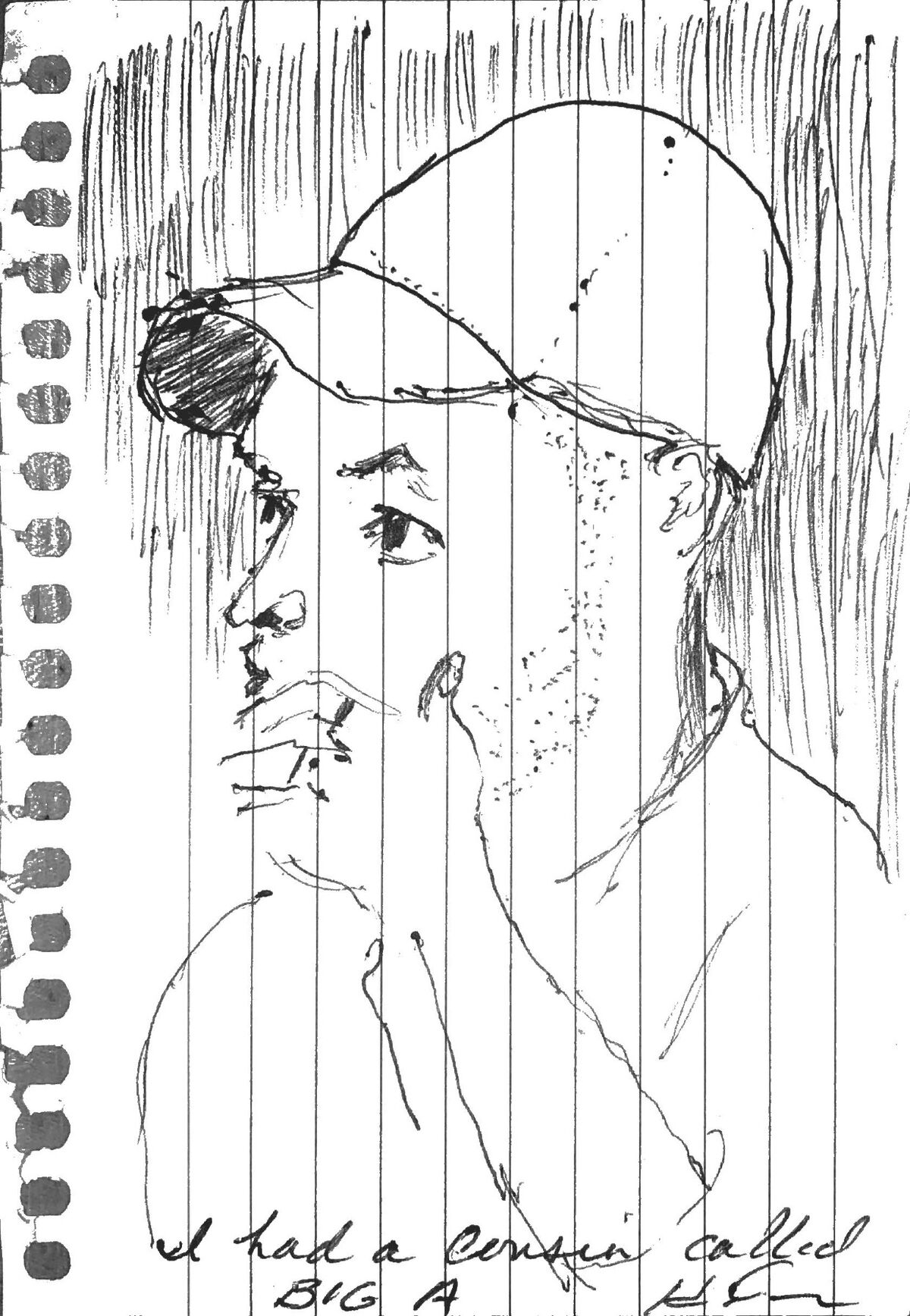 Henry Taylor, I Had A Cousin Called Big A, 2018. Courtesy of the writer. 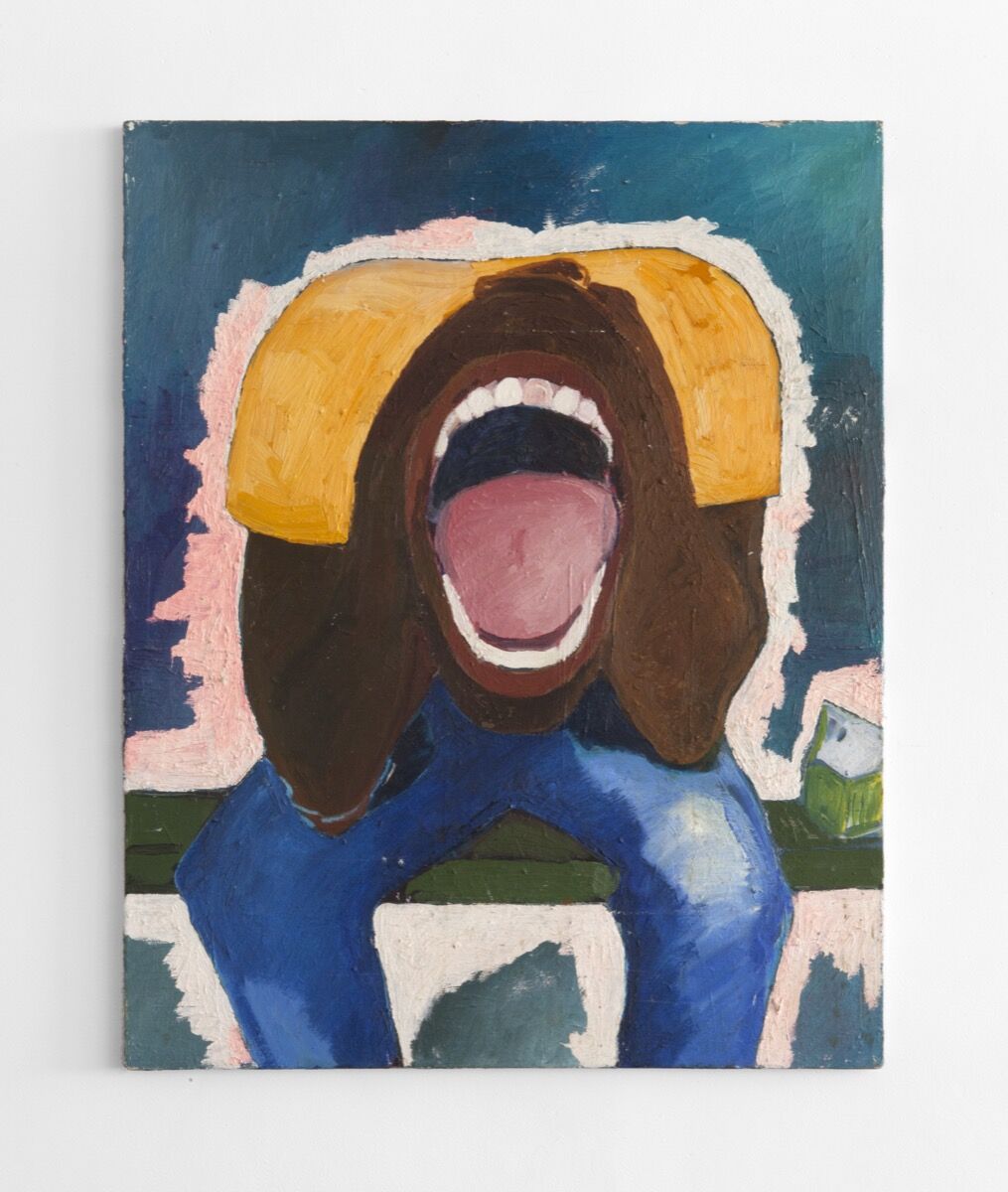 Even in the midst of our interview, Taylor was working. As I chatted with his partner—the artist
Cassi Namoda
—he began to sketch my portrait on a piece of notebook paper. By the time our conversation was through, Taylor had finished the piece and given it a name: I Had A Cousin Called Big A. In the drawing, I’m wearing a baseball cap and my hand is resting against my chin as I listen intently to Namoda discuss Taylor’s art. What struck me about the impromptu portrait is the way he captured my eyes; the depiction seemed accurate and honest. Taylor has a way of painting peoples’ eyes with such a deepness that they appear personal, and highly emotional. Why, I asked, does he paint eyes the way he does?
“I probably went for 10 years starting with the eyes,” said Taylor. “I just stare so much at people, maybe that’s why.” The glances in his paintings show anxiety and imperfection, ecstasy and self-assurance. The Times They Ain’t A Changing, Fast Enough! captures how death and injustice can make the pupils so big, so searching. But occasionally, Taylor’s figures are sightless. Screaming Head (1990) shows a figure whose face is entirely taken up by an enormous, gaping mouth. In 2013’s Mary had a little…(that ain’t no lamb), a woman’s entire face is little more than an expanse of featureless brown pigment. And Homage to a Brother (2007), which memorializes Sean Bell—another victim of police violence—is also without eyes. The gesture can make Taylor’s figures feel distant, like shadows.
Throughout his career, Taylor has remained committed to uncovering stories—about his family, about black people, about power and despair. “My painting is about…trying to be about some love shit, you know what I mean?” the artist said. “I had a cousin I called Aunt Peggy, and she came to me in a dream. ‘Henry, just tell the truth!’ That’s all she said! And I’ll never forget it. I’m still digging. I just want to be honest and make something beautiful that I can go back and look at and say: ‘I’m proud of that.’”
Antwaun Sargent
Correction: A previous version of this article misidentified the Robert De Niro Sr. Prize as the Roger De Niro Sr. Prize. The article also incorrectly stated that Rachel Kaadzi Ghansah’s essay in Henry Taylor’s forthcoming monograph is titled, “Wild With Love”. The correct title is “Henry Taylor’s Wild Heart Can't be Broken.” In addition, the article also suggested that Taylor’s, The Floaters, was included in the Whitney Biennial. While it was simultaneously on view on the High Line, it was not included in the Whitney’s exhibition.
Related Stories