How Do You Exhibit Sound Art? 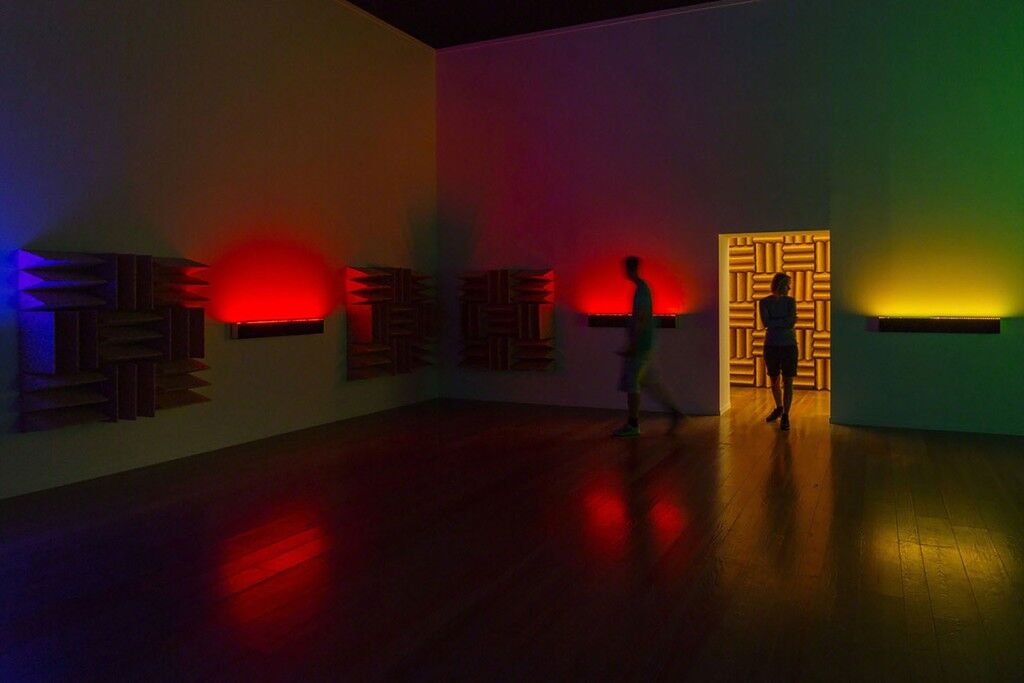 Haroon Mirza
A Chamber for Horwitz; Sonakinatography Transcriptions in Surround Sound, 2015
Lisson Gallery
Sound art
has always been a tricky proposition, for obvious reasons: Unlike a painting or a sculpture, it doesn’t stay put. This unpredictable medium has provided a wealth of potentials for artists—and challenges for curators—whether it’s being exhibited in the white cube or in the wilds of a German forest.
“The presentation of a sound piece isn’t just about the installation of whatever media player you have on hand, plus some headphones,” said Anna-Catharina Gebbers, a curator at the Hamburger Bahnhof in Berlin. Instead, it involves what she terms “the acoustic creation of space.”
When encountering an object-based work, the viewer has much more control over the experience. You can walk up to a painting to see its finer details; every so often, you’re even allowed to touch a sculpture to appreciate its full materiality. If you don’t like what you see, you can just close your eyes—but there’s no way to naturally close your ears.
That means addressing one of sound art’s chief hurdles. Sound essentially “leaks,” according to Gebbers. “As a curator, one of the first things I think about is how can I protect the sound piece from other sounds, like those generated by audio works in its proximity, or even just ambient noise.” She explains that our brains are constantly processing audio data, prompting numerous additional considerations in order to present a sound work in a way that adequately expresses the artist’s idea while making it accessible to the visitor.

According to sound artist and historian Seth Kim-Cohen, this onus falls to artists as well as curators. “When you want to picnic in the park, you have to bring your own plates, napkins, and cutlery. You don’t expect a waiter to emerge offering place settings,” he said. “Likewise, the sound artist can’t blame the curator when he’s told that he can’t play his piece on massive speakers at 110 decibels in their storefront gallery.”
In its nascency, sound art generally was aligned with developments in avant-garde music, and so work was often presented in spaces designed with acoustics in mind. Kim-Cohen points out in his book In the Blink of an Ear: Towards a Non-Cochlear Sonic Sound (2009), that sound art has always forced a re-negotiation of the established relationships between artists and their materials, traditions, and audiences, especially after World War II. In 1948, American composer and artist John Cage composed his first silent composition. The 1952 work 4’33”—which featured roughly four and a half minutes of a pianist sitting on stage in silence while the audience listened to the shuffling and throat clearing of their neighbors—became one of the foundational moments in sonic art history.
Increasingly, as sound art became woven into the practices of
Conceptual
and
Fluxus
artists of the 1960s and ’70s like
Joseph Beuys
,
Yoko Ono
, and
Alison Knowles
, it also functioned as a form of institutional critique, the point being to transcend the physical space of the gallery or museum. Through the 1980s and ’90s, artists like
Bill Fontana
and
Doug Aitken
were harnessing the power of new forms of electronic media to not only record and document their work, but create immersive environments or events. Those include Aitken’s multi-panel video installations and Fontana’s recordings and transmissions positioned at sites ranging from museums to the Golden Gate Bridge (installations that, beginning in 1976, he dubbed “sound sculptures”). 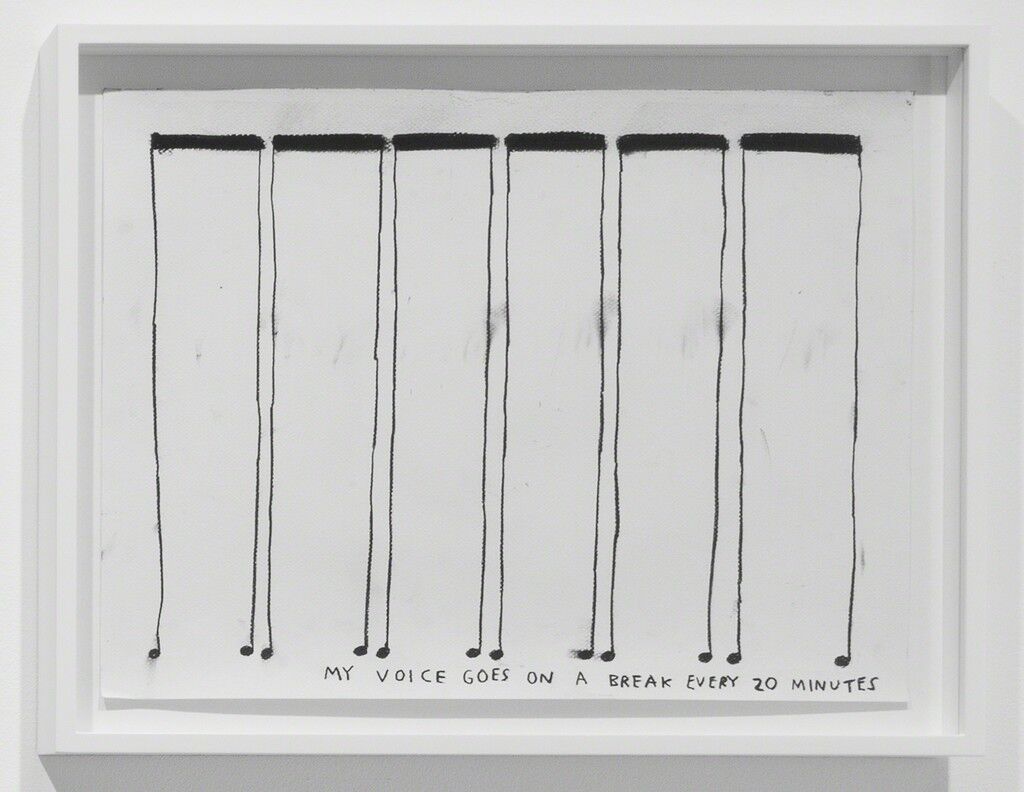 Christine Sun Kim
My Voice Goes on a Break Every 20 Minutes
Carroll / Fletcher
Sound’s life in a gallery context is constantly evolving. “Artists who want to exhibit sound in spaces designed for visual art must accede to the realities of such spaces,” said Kim-Cohen, who started experimenting with sound-as-art while playing in a series of Chicago grunge bands in the 1990s. He found that his conceptual approaches weren’t supported by the live-music contexts he was familiar with, and so he started approaching galleries to play his work.
While “sound art” became a recognized genre of artistic production around the early 1980s, if not earlier, it’s taken another 30 years for sonic artists to receive institutional recognition. In 2010, Scottish artist
Susan Philipsz
became the first Turner Prize winner in the history of the award to have created nothing visible or tangible. Instead, her prizewinning work was comprised of the sound of her voice singing three slightly different versions of a Scottish lament, installed under three bridges crossing the river Clyde in her hometown of Glasgow.
It wasn’t until 2013 that New York’s Museum of Modern Art held its first major exhibition of sonic art, “Soundings: A Contemporary Score.” The curator of the show, Barbara London explained that the institution’s greater attention to multimedia art was in part due “simply [to] improvements in media systems that let the museum display sonic work in less disruptive ways,” reported the New York Times.
This seminal sound show included works by the likes of Philipsz,
Haroon Mirza
, and
Christine Sun Kim
, and revealed how many contemporary sound artists are creating a new sonic palette—often using new and old electronics alike to compound how sound comes to shape not only a given physical space, but our media-saturated environment as a whole. 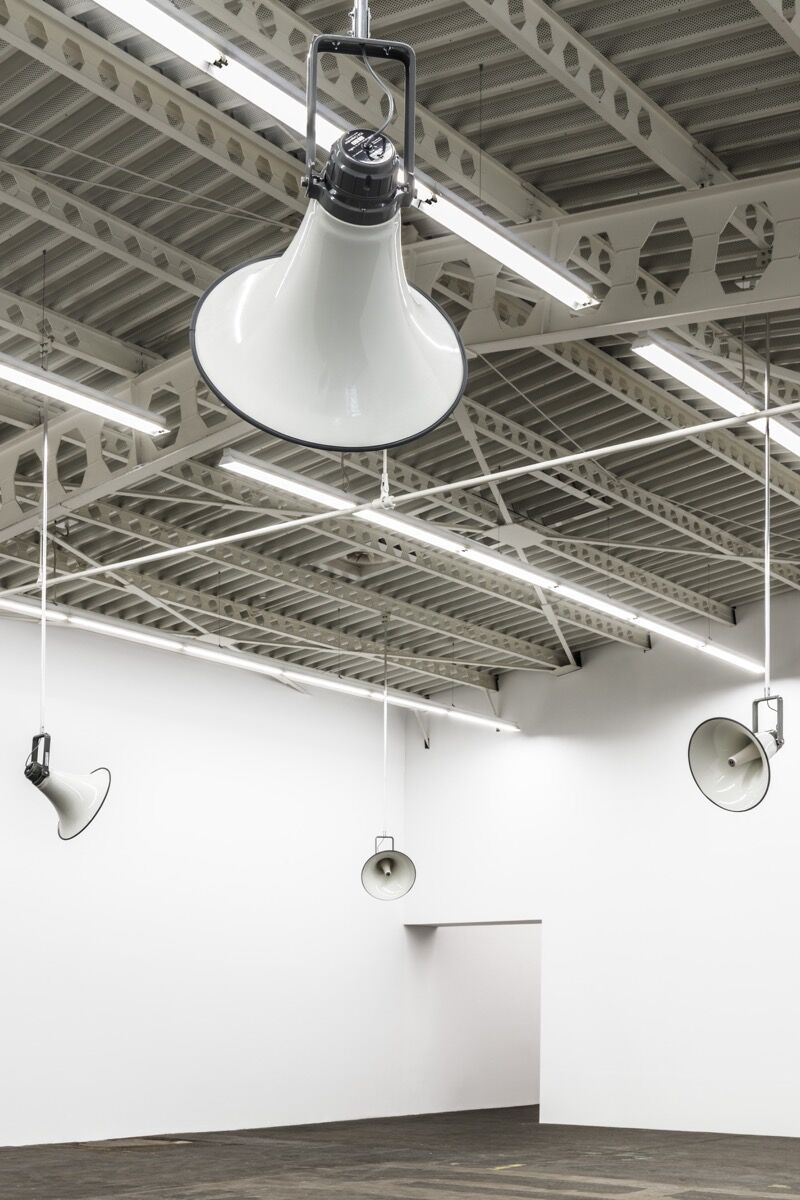 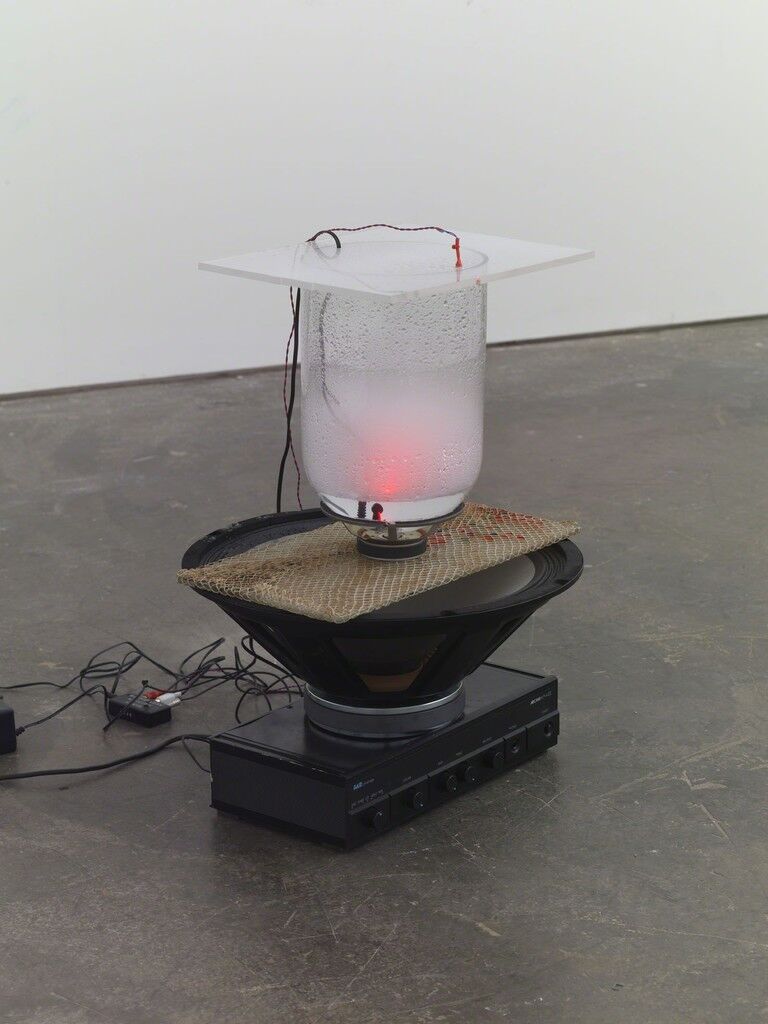 Haroon Mirza
Lo-Tech Reproposed, 2014
Lisson Gallery
Advertisement
Consider the work of U.K.-based Mirza, which buzzes and pulses with the amplified sounds of interference between transistor radios or electricity as it passes through LED lights. One of Mirza’s clear goals is to push us toward an understanding of how experiences can be shaped by the sounds around us. One of his best known works, Taka Tak (2008)—composed of an Indian chest, flashing lights, a turntable, and a spinning wooden sculpture rigged to create an industrial-sounding backing track—addresses popular music’s contested place in Muslim culture, and how it seeps nevertheless into daily life.
In this way, sound can still operate in an extremely visual way, especially when the apparatuses to produce it are visible (and sometimes fetishized). The use of specific media, like records and cassettes, or media players, like old radios, are “cultural signifiers,” according to Ryan Packard, composer, sound artist, and marketing director of Chicago’s Experimental Sound Studio, an artist-run organization that focuses on the recording, archiving, and presentation of sound. (They maintain the archives of Malachi Ritscher and
Sun Ra
as well as his work with the Arkestra.) The specificity of the sound equipment that’s used merges the aural with the visual by attaching the piece to a person, place, or time. “The sheer fact that it’s dated makes it a representation of time itself,” he said.
Packard also noted that sounds, and the manner in which they’re presented, have nuances similar to other artistic materials. “The timbre of records or tapes versus a digital recording,” he says, “that’s an aesthetic consideration just like choosing to use blue or red paint would be.” 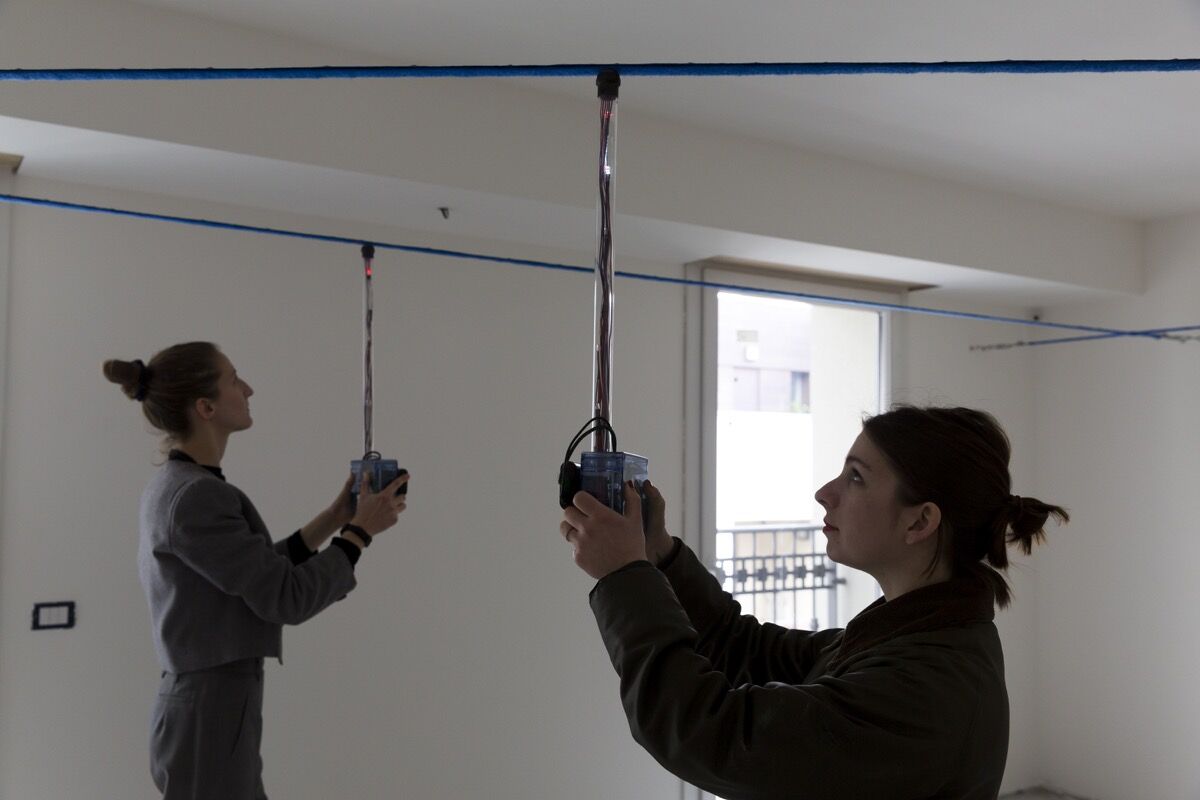 Installation of Christine Sun Kim's Game of Skill at Galeria Zero. Courtesy of the artist.

For some artists, working with the medium means an even greater attention to small details, as well as to the underlying process by which sounds are generated and perceived. New York-based Sun Kim, who has been deaf from birth, looks closely at how we use sound and learn it visually and physically as much as aurally. “I live in a hearing person’s world. I understand sound according to others’ physical reactions to sounds,” Kim said. “I know what’s a polite sound, what’s an inappropriate sound.” But the artist wanted to “unlearn” these noises and recode them according to her own terms.
This prompted her to create Game of Skill 2.0 (2015), in which audiences listened to a reading of a text about the future written by Kim and voiced by a museum intern. The recording is only audible when a special sound-emitting device has its antenna touched to an overhead magnetic strip that cuts through the gallery space. Performed backward or forward, with the speed of the sound proportional to the participant’s movement, the piece physically enacts the process of “scrubbing,” by which one fast-forwards or rewinds through a recording.
The majority of Kim’s work—and, indeed, that of many sonic artists—is relegated to indoor spaces, where sound can be much more easily controlled. For Canadian artists
Janet Cardiff & George Bures Miller
, however, who often create subtle sound installations outdoors, manipulating sound often comes down to dealing with mother nature. For their 2012 Documenta installation, Forest (for a thousand years), they placed 18 shoebox-sized speakers among the trees and stashed 4 subwoofers amidst the woodland underbrush of Kassel’s Karlsaue Park. These disguised devices played 28 minutes of sound collage that included everything from birdsong to artillery fire, whispers to explosions, collected by the artists from all over the world.

Excerpt from Janet Cardiff, The Murder of Crows.

The piece depended on the use of  a technology known as Ambisonics, developed in the 1970s, which creates a three-dimensional sound field and creates the sensation of sounds that “move” around the visitor. “We had to have speakers of exceptional quality to create the illusion of spatial movement,” Cardiff says, explaining that the subtleties of the shifts in sound could easily be lost to the surrounding ambient noise of the great outdoors.
The technology behind Cardiff and Miller’s work is often paramount to its success. To that end, they are “constantly migrating equipment” and updating their tools. But for curators, the decision to swap out audio equipment isn’t an easy one. “We basically do a traditional condition report before and after an installation of a media work,” said Gebbers, who explains she must make judgement calls about whether the specific device is more important than the sound it helps emit. “If not, then should we adapt the technology? Or is the specific sound created by the recording technology and the playing devices an integral component? It becomes fraught very fast.”
And Gebbers stresses that conserving and collecting sound art is another task that is very different to painting or object-based art works. “There is a huge and growing range of recording mediums and media player devices that need specific maintenance, expert knowledge, and spare parts,” she said.
This is mostly delegated to technical service companies which have to be payed for the installation and maintenance during the exhibition plus the rental of the devices. Perhaps the future holds specialized courses of conservation study, training a new generation who can revive a vintage Walkman or rebuild an MP3 the same way someone might fix faded pigment on a
Rembrandt
.
Margaret Carrigan
Related Stories