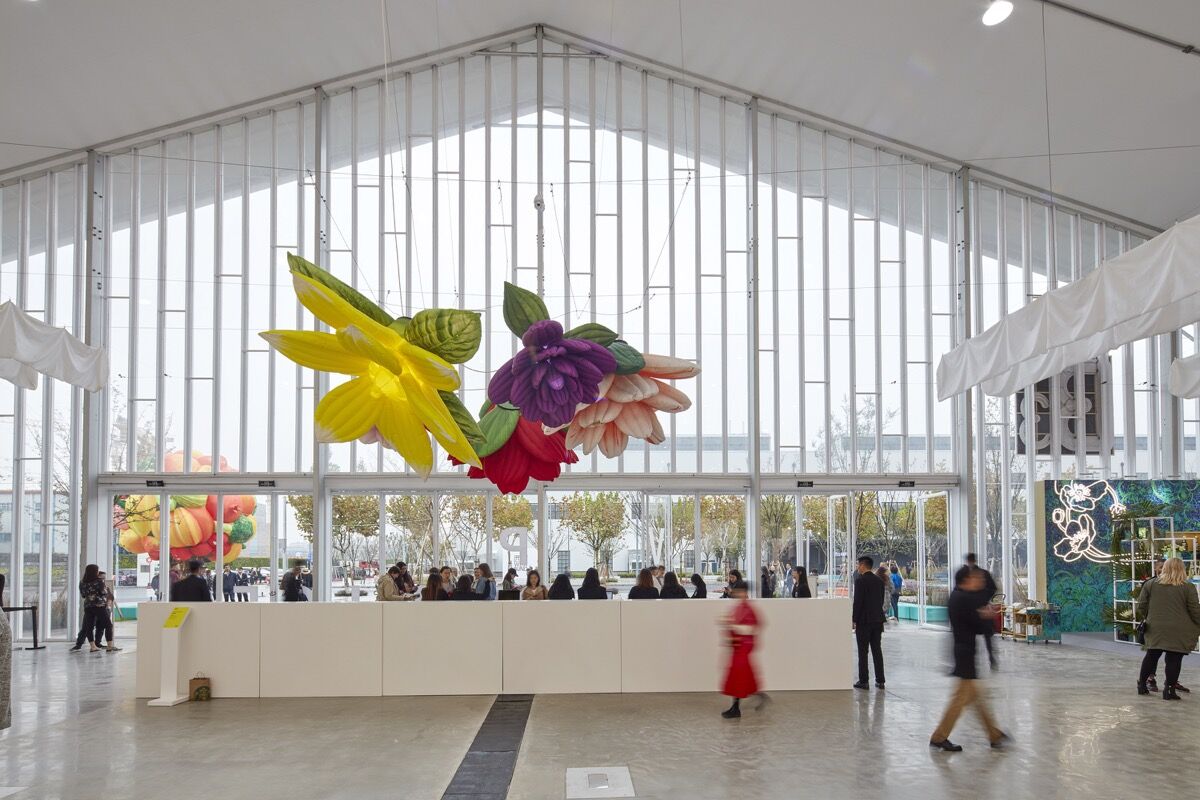 For its first four years, West Bund Art & Design—one of the two major fairs that open in Shanghai in November—existed as a stylish boutique fair, attracting a small selection of mega-galleries and influential outposts alike to this former industrial area by the Huangpu River. But like seemingly everything in this city, West Bund is expanding—rapidly.
This year, the fair, which opened to VIPs Wednesday, ballooned to a list of 115 exhibitors from 43 different cities. Eighty-seven galleries take part in the fair’s main section, up from 39 that participated in its 2016 edition. In order to accommodate the new booths, the government-owned Shanghai West Bund Development Group Co. constructed a new expo center called Hall N, doubling the complex’s overall exhibition space to 20,000 square meters (roughly 215,000 square feet).In a testament to Chinese speed and ingenuity, the new space, snaked through with indoor courtyards lined with trees, was constructed in just 100 days. 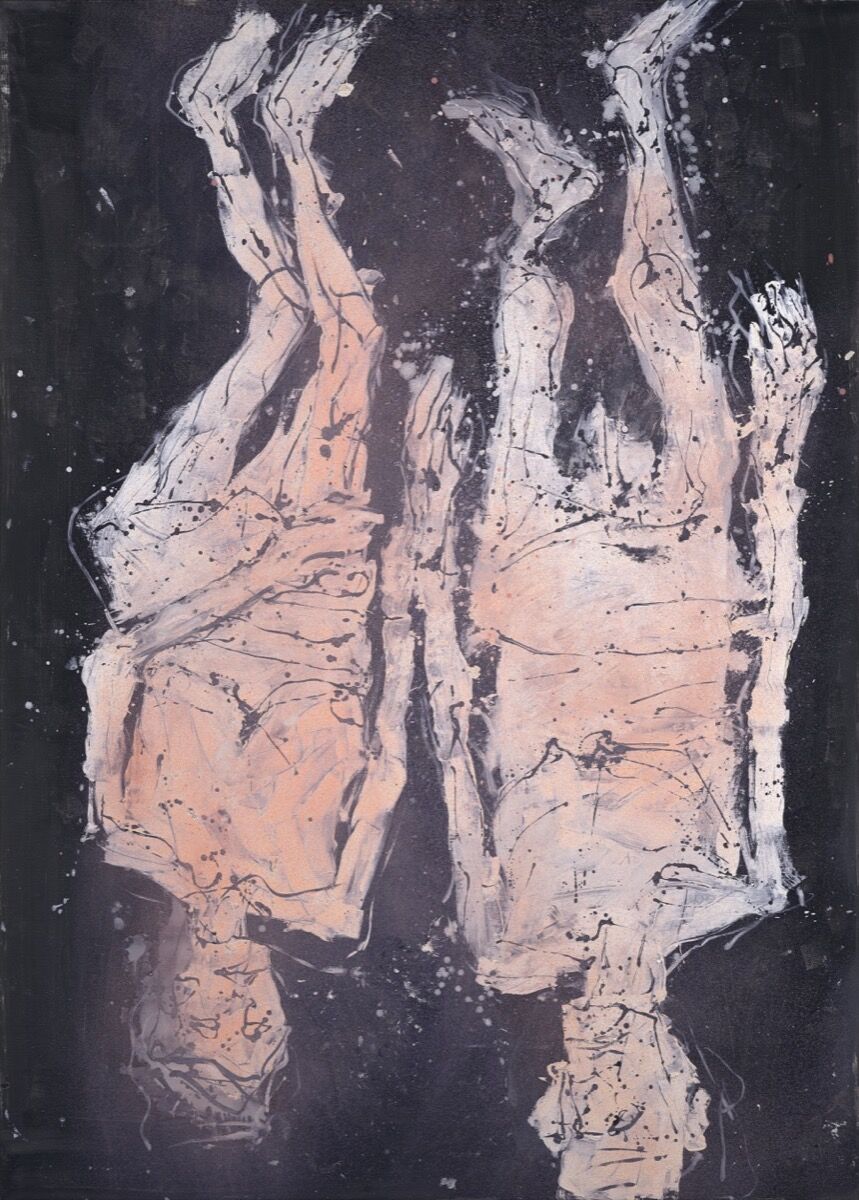 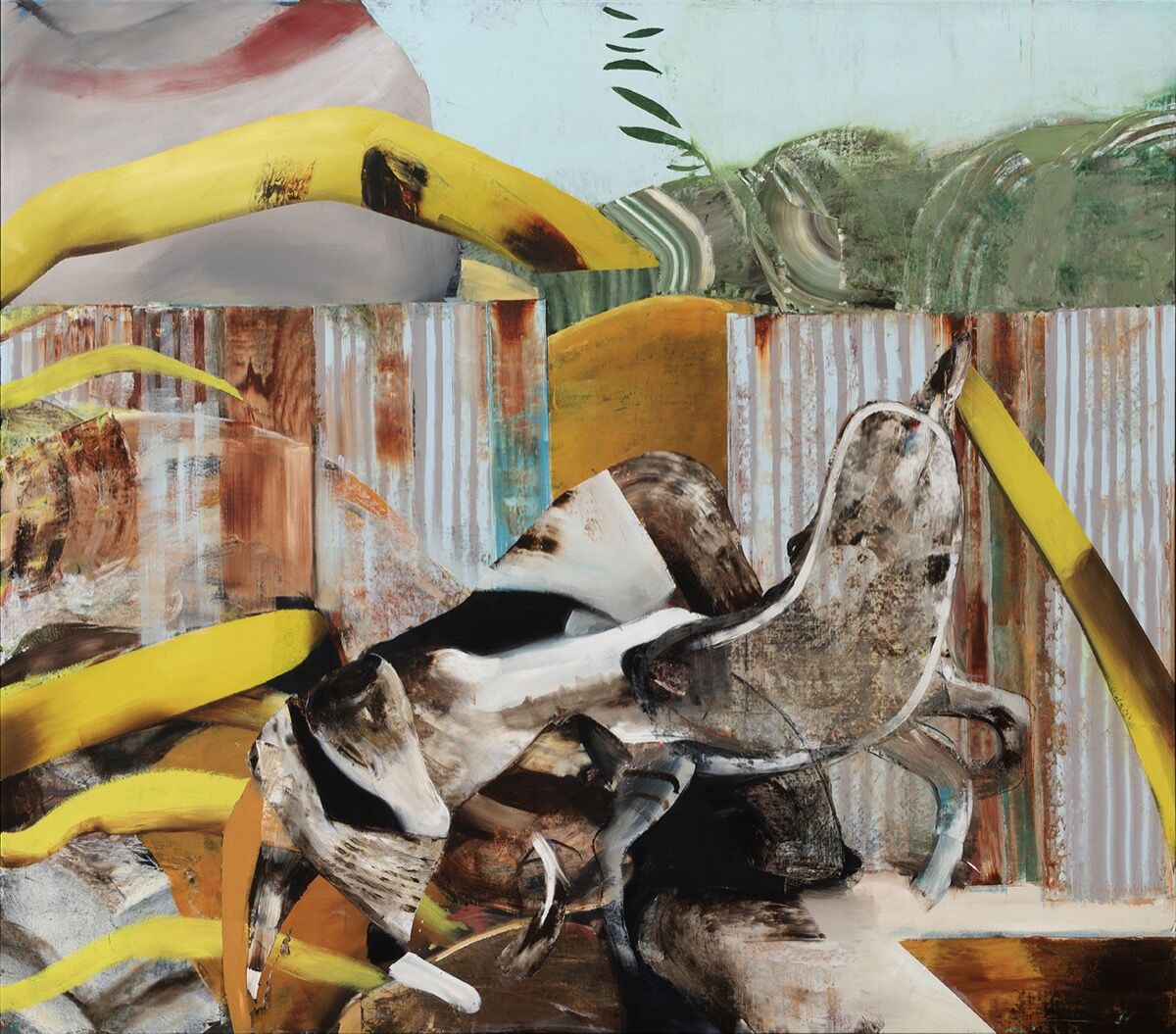 Meanwhile, the larger cultural district of West Bund has welcomed new galleries and museums to set up shop along the waterfront—the most significant addition this year being the West Bund Art Museum. On Wednesday night, exhibitors and collectors celebrated the opening of the fair in this forthcoming,
David Chipperfield
–designed museum’s shell. Next year, the Centre Pompidou will begin a renewable, five-year run in the space. Between West Bund’s expansion, the opening of the 12th Shanghai Biennale, and the sixth edition of the Art021 fair, which opened to VIPs one day after West Bund, on Thursday, all eyes are on Shanghai this week.
China’s share of the art market has also been expanding, even as the country’s economic growth slows. It pulled ahead of the U.K. to become the second-biggest market worldwide in 2017, according to The Art Market | 2018, a report compiled by arts economist Clare McAndrew. With a 21% slice of the action, or $13.2 billion in sales, China’s art market is now second only to the United States.
Dealers at the VIP preview of the fair said increasing demand from an ever more serious and free-spending class of collectors in China has allowed a regional fair like West Bund—which focuses on Asian collectors rather than trying to lure the jetset from Europe and America—to expand at such a rapid pace. Whether or not they have already hired a local representative or opened up an actual gallery in the region, fairs like West Bund and Art021 offer a foothold and opportunity to experiment in this important market. 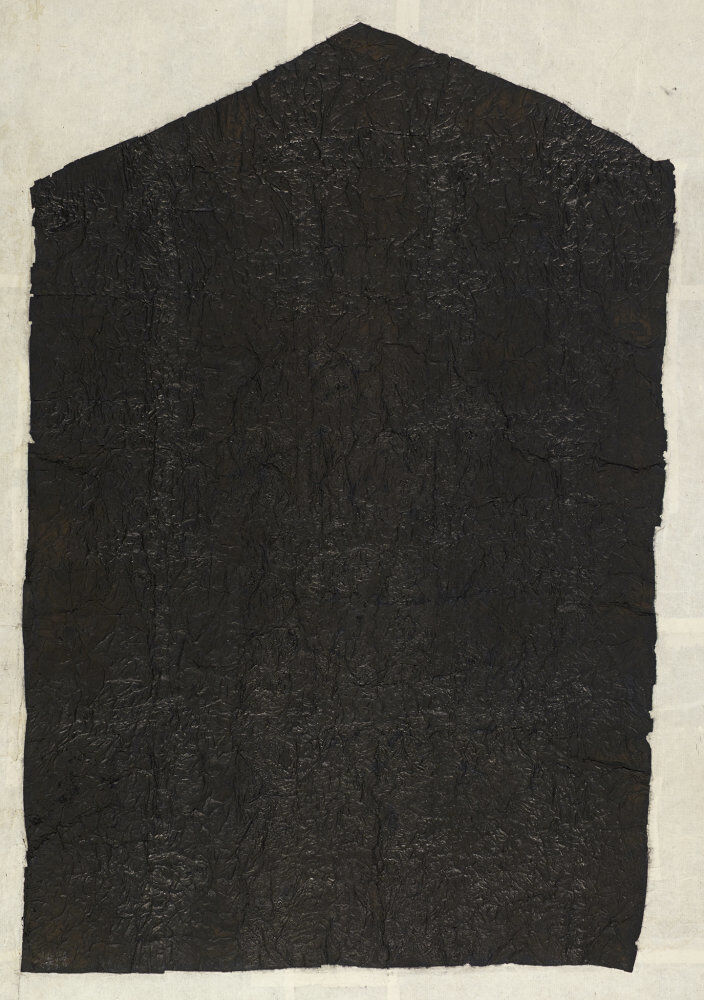 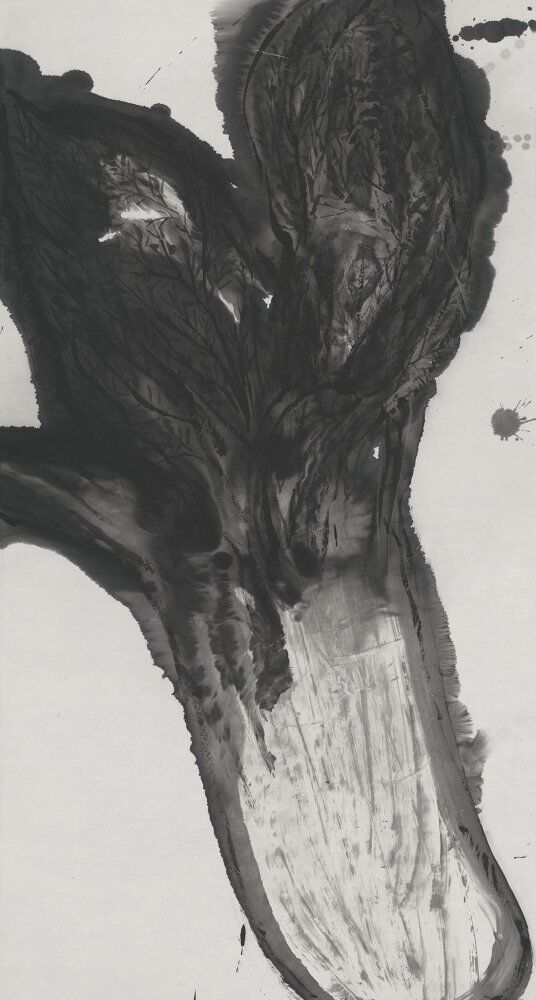 Li Jin 李津
Vegetable #1 素1号, 2015
Ink Studio
Advertisement
At the VIP opening of West Bund, Ben Brown Fine Arts sold a small work by
Gerhard Richter
, Abstraktes Bild (1990), to a Chinese collector for just under $1.6 million. Just across the aisle, Galerie Thaddaeus Ropac sold a massive, untitled
Georg Baselitz
painting from this year, of two upside-down naked bodies, to a Shanghai-based collector for €850,000 ($971,460).
Ropac, who has participated in Art021 since last year, was doing West Bund for the first time and said he enjoyed how, compared to the internationally-focused Art Basel fair in Hong Kong, the Shanghai fairs really focuses on Asian collectors. While lining up buyers for certain works alongside Nick Buckley Wood, his director in Asia who is based in Hong Kong, he said he found the collectors in China to be “much more serious now” than they have been in years past. Nonetheless, he said, having a successful fair here takes work.
“For us, we identified the works we wanted to bring, and prepared beforehand, and I think that was key,” Ropac said. “I don’t think this is a place where you bring a thing and just expect it to sell.” In addition to the Baselitz, he had sold a new painting by
Adrian Ghenie
, Favela (2018), for €1.1 million ($1.2 million), to a foundation in South Korea. 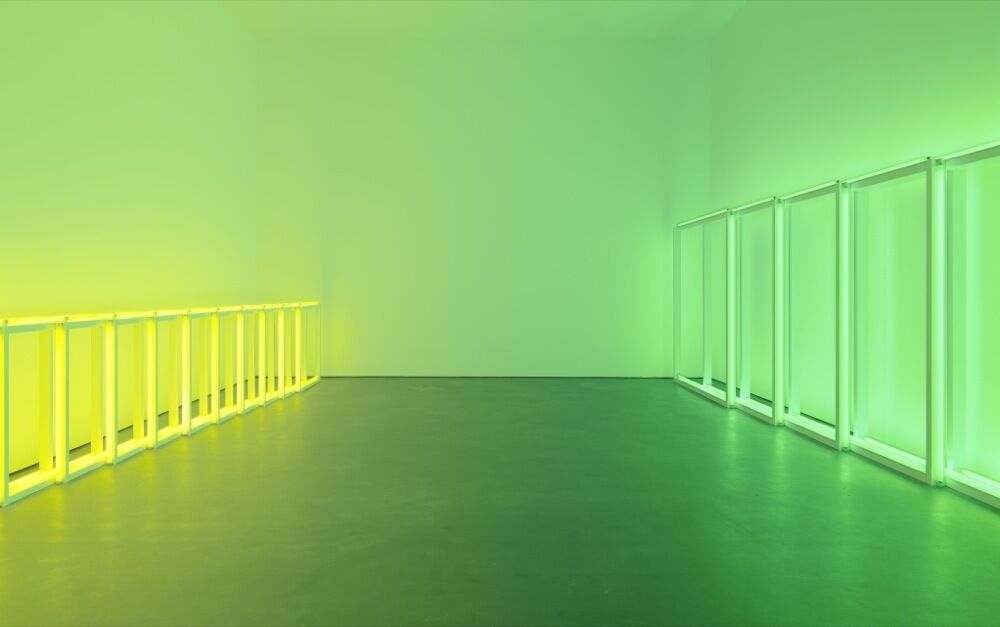 Dan Flavin
untitled (to Sonja), 1969
David Zwirner
“We wanted to place both of them in Asia,” Ropac said. “With the Ghenie, work like this is so in demand, we wouldn’t just bring it and sell it off the wall.”
Other big sales on West Bund’s opening day included a large
Yayoi Kusama
pumpkin sculpture from 2015 at Ota Fine Arts’s booth, which went for between $1 million and $2 million; at Lehmann Maupin’s booth,
McArthur Binion
’s Ink: Work (Vermillion) (2018) went for for between $100,000 and $120,000 and
Hernan Bas
’s Hide and Seek (Fuming) (2018) for between $150,000 and $200,000.
Han-I Wang, the former Christie’s vice president who left the auction house in August to join Gagosian as its senior director in Hong Kong, said that the gallery sold multiple works during the preview day of its first West Bund. Though she wouldn’t specify which artists’ works were among those sold, the booth included works by
Dan Colen
,
Hao Liang
,
Alex Israel
,
Jennifer Guidi
, and
Urs Fischer
. 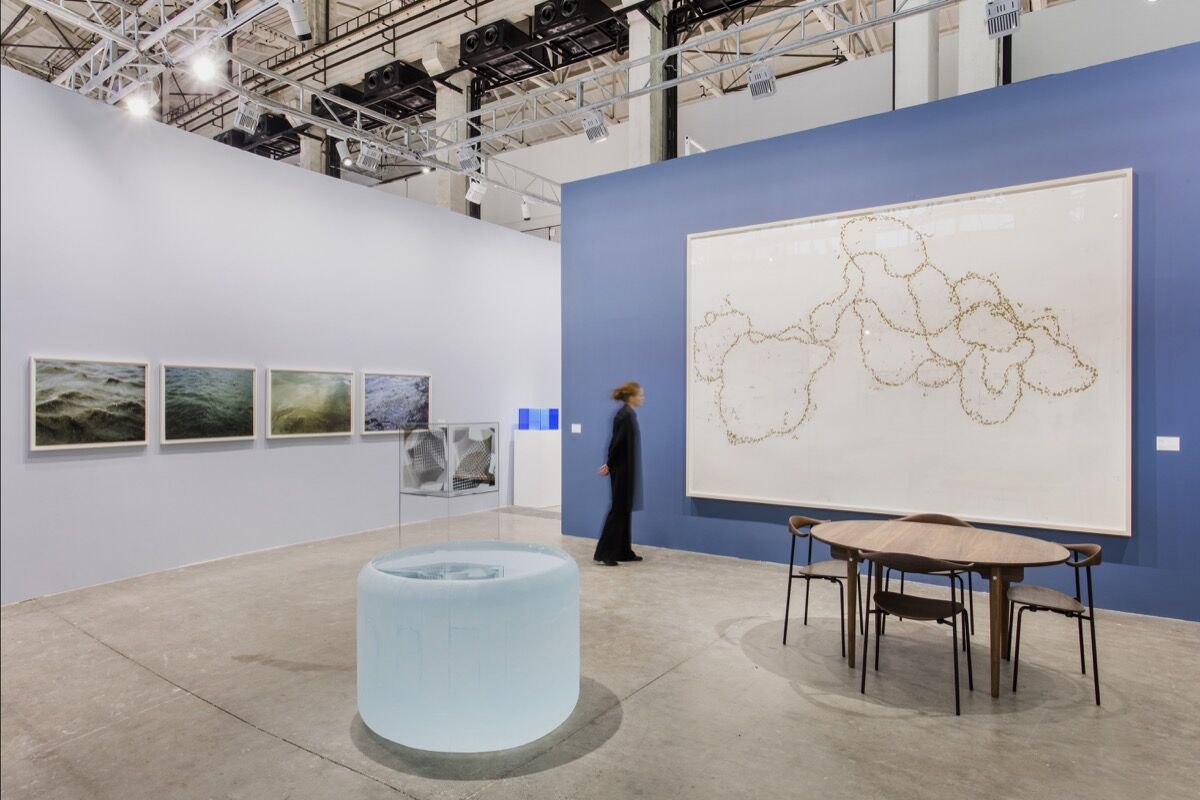 “Collectors here in China—in Shanghai in particular—they’re actually very savvy, they’re very sophisticated, and when they look at
[Rudolf] Stingel
or Urs Fischer, it’s not like a first-time experience,” she said. In addition to these Shanghainese collectors, Wang said they had seen clients from Singapore, Hong Kong, and other cities in China at West Bund.
A number of galleries could report only reserves on opening day. But those galleries and others stressed that it’s tough to judge the success of a fair like West Bund based on what sales are notched at the beginning. Collectors in this part of the world often take several days to decide whether or not they’re going to buy, they said. In the case of West Bund, specifically, these buyers also have Art021’s offering to contend with—many galleries participate in both—before deciding what to take home. Craig Yee, the director of the Beijing contemporary ink art gallery Ink Studio, said that he’s done more than five fairs in mainland China in the past year, and that each time, his best day was Sunday.
While he had sold the smaller abstract, Ben Brown had yet to find a buyer for an arresting bubblegum-pink-slashed abstract Richter from 1983, Zaun (Fence), priced at $6.7 million. Similarly, David Zwirner was still trying to place what must be one of the more wowing single-work booths at an art fair in quite some time:
Dan Flavin
’s untitled (to Sonja) (1969), a rare two-part neon work in which the gridded barriers lined with green- and yellow-tinted fluorescent bulbs face each other directly. At 32 feet long, it filled the entire booth, and by Thursday remained unsold at $3.5 million. Leo Xu, the former Shanghai gallerist who closed up shop last year to become co-director of Zwirner’s Hong Kong location, said that he wanted to bring the most ambitious project possible to the fair as a sign of respect to the local audience and art community. 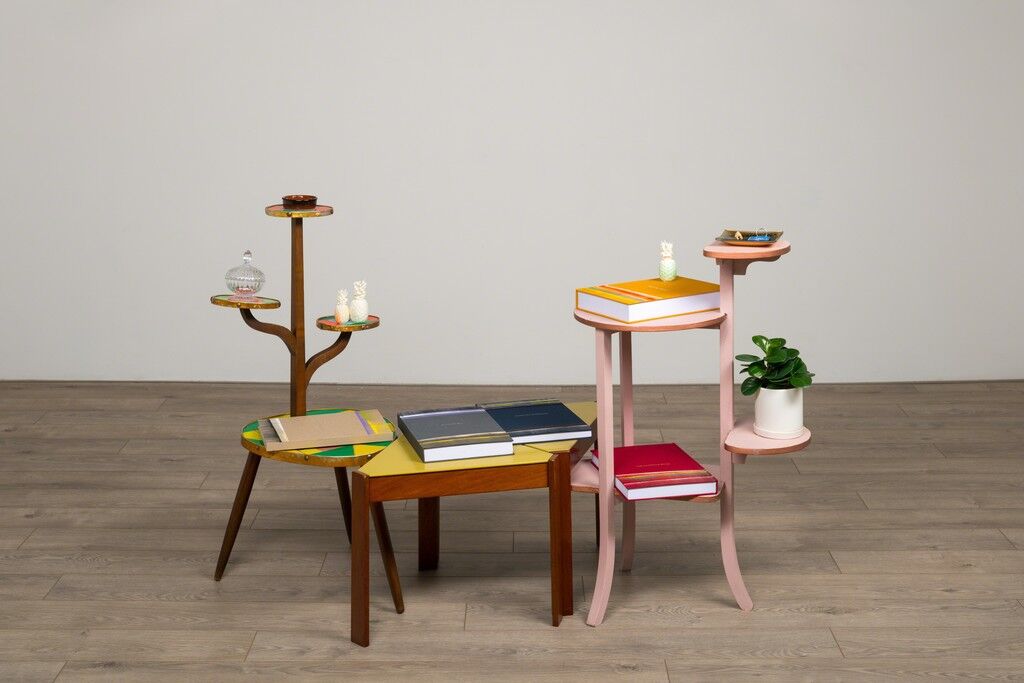 Samson Young 楊嘉輝
Coffee table music (some other causes for celebration) VI, 2017
Edouard Malingue Gallery
“We are trying to look at institutions in Asia, and trying to find it a good home, but it’s evidently going to take some time. But that’s not the purpose of this presentation,” he said. “For the booth, it’s very much about giving people the chance to see the work. Not everyone gets a chance to go to Dia:Beacon or MoMA.”
Indeed, the Flavin was attracting a raft of visitors, many of whom approached the glowing tubes in a similar fashion: one arm outstretched, phone-in-hand, trying to get the angle just right for the perfect selfie.
Xu said that an uptick in institutional and gallery shows has been stoking interest in American
Minimalism
in China. Zwirner’s Hong Kong gallery is set to open a show featuring Flavin,
John McCracken
,
Donald Judd
, and
Fred Sandback
on November 15th, and Hauser & Wirth will host
Roni Horn
’s first exhibition in China later that month, also in Hong Kong. 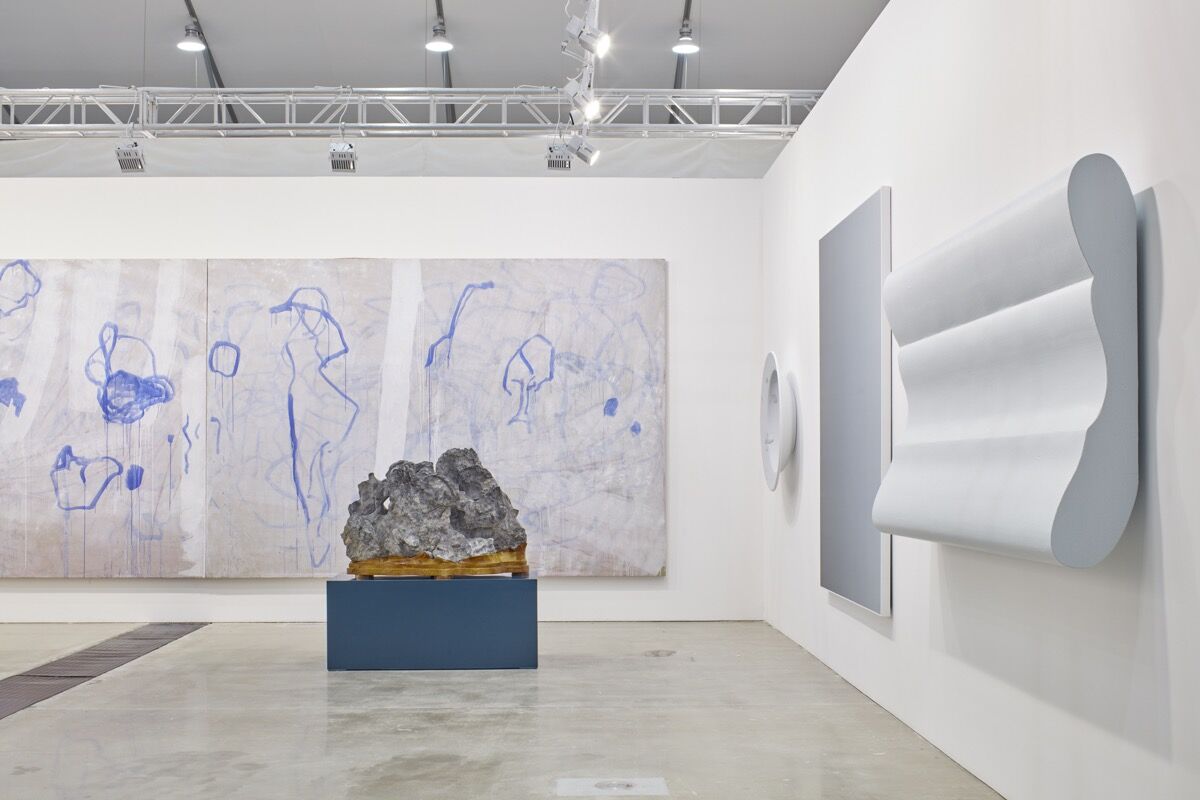 An azure blue work by Horn sat front and center in Hauser & Wirth’s themed booth called “Metaphorical Spaces,” which also features with pieces by
Larry Bell
and
Eduardo Chillida
. The gallery was fêting exhibitions of
Matthew Day Jackson
’s work at collector Qiao Zhibing’s Qiao Space and
Louise Bourgeois
at the Long Museum—both also located in Shanghai’s West Bund—this week, but decided to bring other artists to the fair itself. Director Fiona Romer said the gallery “take[s] this region very seriously,” and, while she wouldn’t specify what, if any, works had sold on West Bund’s opening day, reported that sales in Asia have doubled in each of the past five years.
Across the street in the new Hall N, the Los Angeles gallery Kayne Griffin Corcoran decided to bring work by fellow Dia-affiliated Minimalists
Mary Corse
and
James Turrell
. Director Beatrice Shen said Turrell had an exhibition at Shanghai’s Long Museum in January 2017 that sparked interest in his work among local collectors. Installed on two sides of a white structure in the front of the booth was Medium Diamond Glass (2017), where an LED light shone onto a pane of glass; on the opposite end of the structure was Small Glass (2018), another LED on glass work.
“It’s our first time doing the fair, but we brought Mary Corse and James Turrell because Chinese collectors were asking about them,” Shen said. 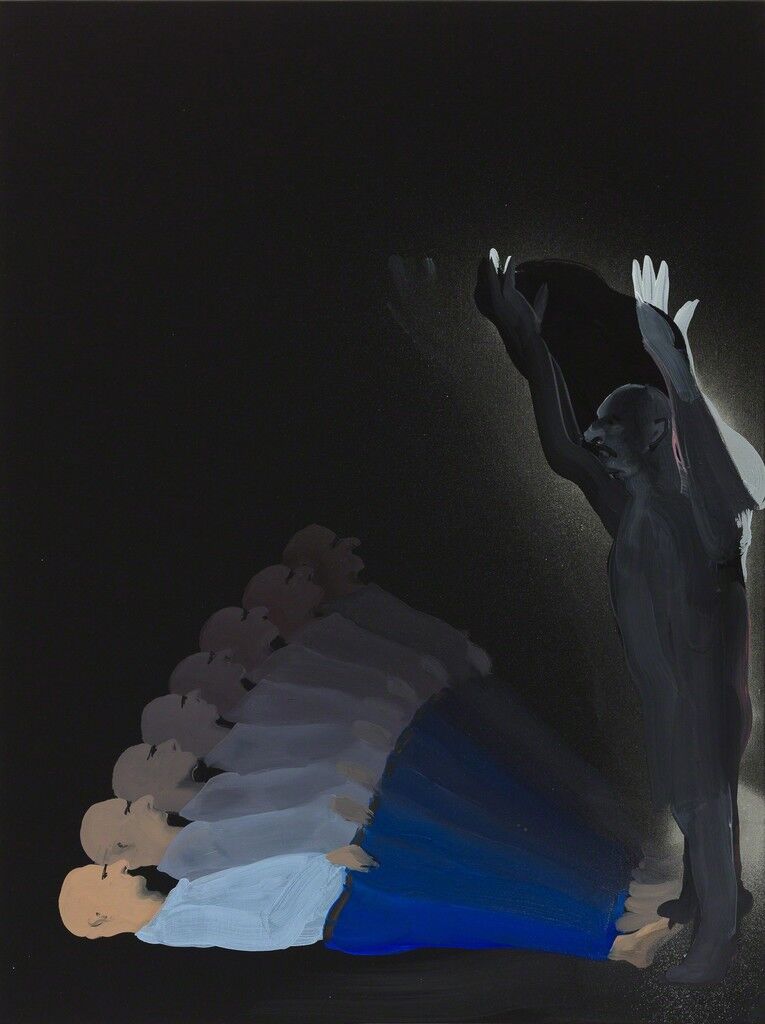 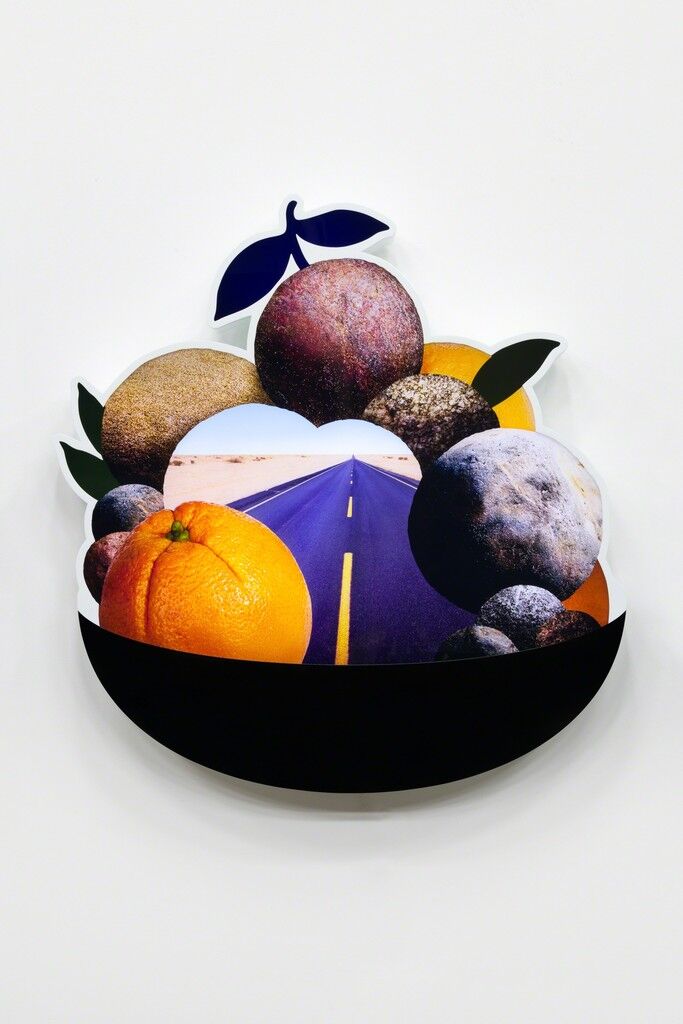 Doug Aitken
Untitled (fruit bowl), 2018
303 Gallery
She added that they had sold one work by Corse for $300,000, and were working to place what she called multiple “domestically scaled” Turrells—as opposed to his giant ganzfeld and skyspace works—for between $375,000 and $650,000.
Elsewhere in the sparkling new Hall N, König Galerie was negotiating with a collector who had put a hold on a painting by
Katharina Grosse
, whose awe-inspiring, immersive show at the K11 Art Foundation’s Shanghai space opened this week. Edouard Malingue Gallery was selling work by
Samson Young
, who repped Hong Kong in the last Venice Biennale, and is currently showing in Malingue’s Shanghai space. 303 Gallery was selling work by
Tala Madani
. And in the roofed courtyards lush with greenery that cut theatrically through the building, fairgoers lounged on couches sipping champagne—an atmosphere rivaling most major convention centers, a hundred days or several years in the making.
Nate Freeman
Related Stories