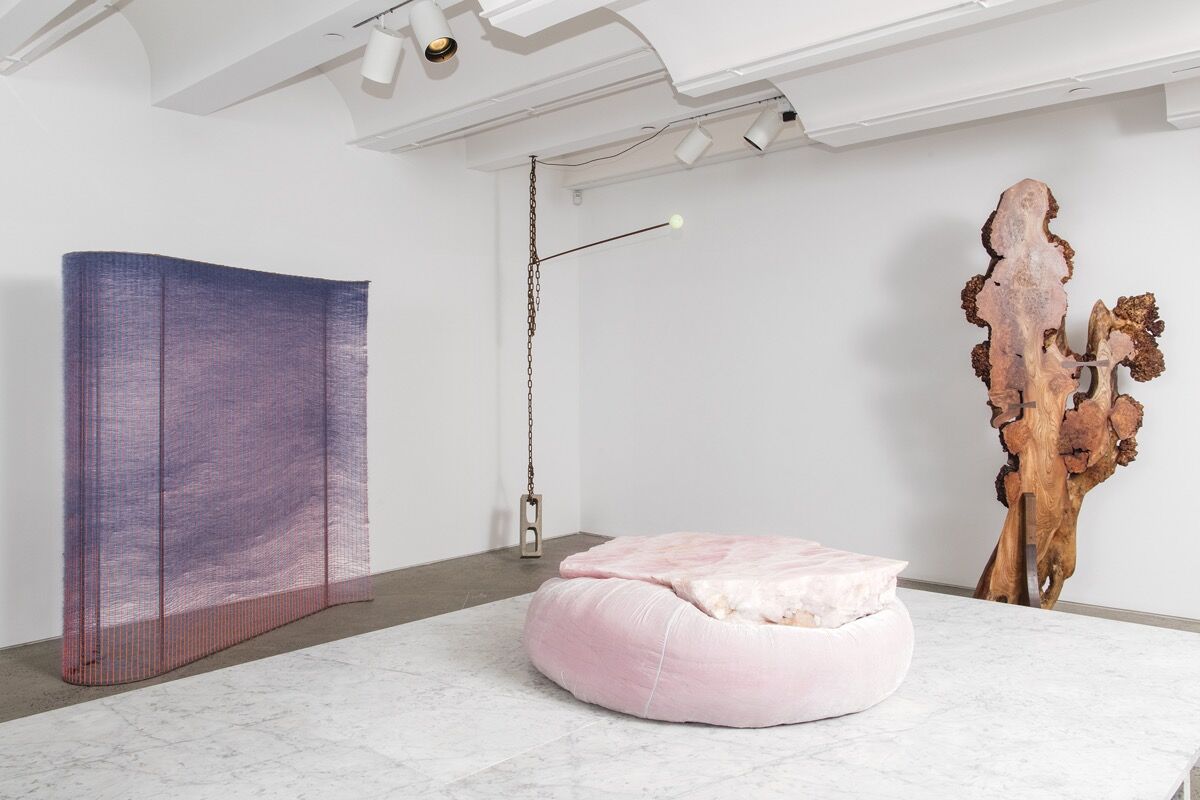 Installation view of “Room With Its Own Rules” at CHAMBER. Photo by David Brandon Geeting. Courtesy of CHAMBER.

By the 24th of this month, more than 500 design-related events will take place across New York City—and that’s just the official NYCxDesign calendar. There are also showroom events, private brand dinners, auctions, art and design fairs and other happenings that, together with the busy spring art season, make May the most action-packed few weeks in New York City. In recent years, the city’s design week presence has exploded from a small, industry-focused trade show to an all-out design festival—and this year promises to be bigger than ever.
Much like the art and fashion industries before it, the design world now increasingly adheres to an international circuit that hops from Paris Design Week and London Design Festival each September to Milan’s Salone del Mobile in April, with additional stops ranging from Cape Town to Cologne to Copenhagen. But it’s the Italian show that’s the epicenter of it all, with a multitude of events surrounding Salone, which alone drew over 343,000 attendees from 165 countries to the Rho fairgrounds over the course of six days this April—not to mention the events and exhibitions from influential brands from Cassina to IKEA that converge in hubs around the city.
It can be a grueling exercise, and just weeks after the festival ends, many of the same figures reunite in New York for the city’s own design week. Historically, the New York festival centers around the International Contemporary Furniture Fair (ICFF), which is in its 29th year and takes place at the Jacob K. Javits Center on Manhattan’s far West Side. This year’s ICFF (May 21–24) will feature some 800 exhibitors, about 50 percent of them from outside the U.S., and 35,000 people are expected to attend the show. 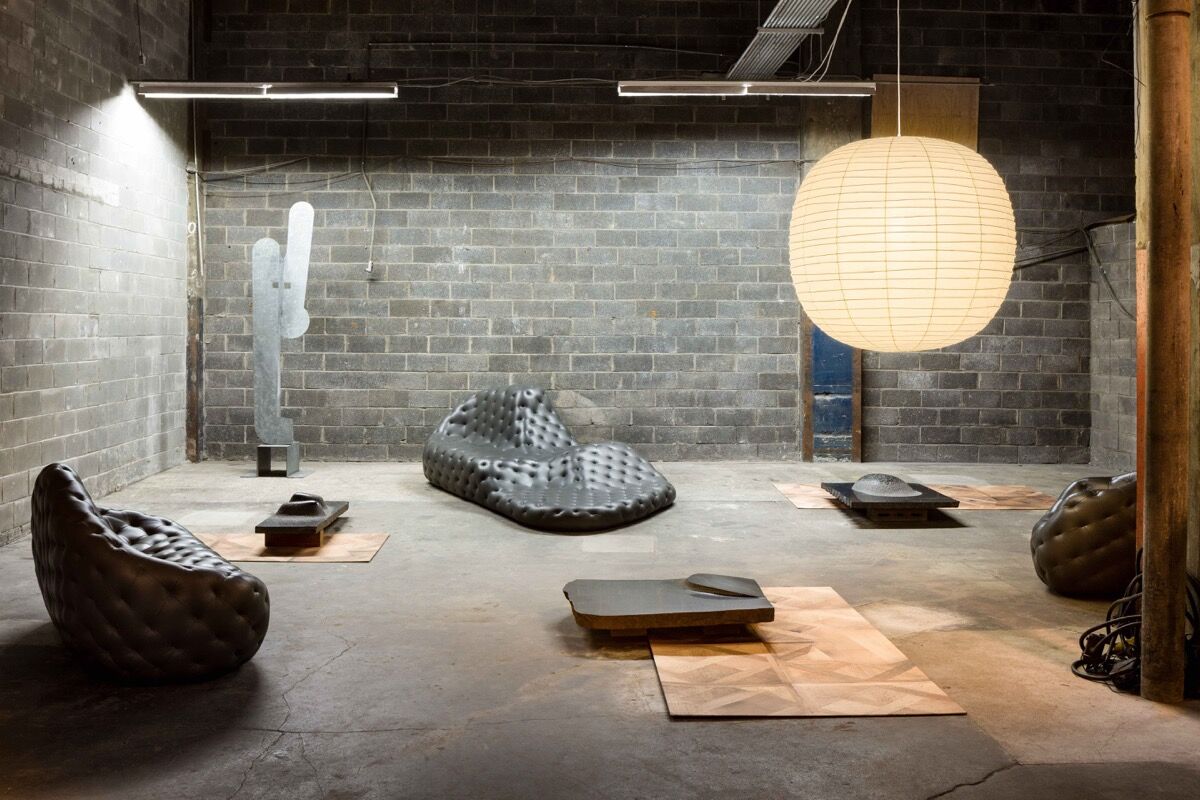 It’s a dramatic change from early iterations of the trade show, which once felt like little more than a rehash of Milan with just the four main Italian brands, says publicist Beth Dickstein, a spokesperson for city’s design establishment. She recently celebrated the 20th anniversary of her publicity firm, bde, which represents brands like Alessi, Flavor Paper, and the Be Original initiative to promote authentic design.
While much of the to-the-trade commerce happens at ICFF, smaller satellites around the city aim to speak directly to collectors and enthusiasts, with events branching into museums, retail spaces, and even restaurants around all five boroughs. For the past five years, many of these events have been consolidated on the official NYCxDesign calendar, an initiative officially run by the city’s Economic Development Corporation (EDC; though it engages several city organizations), as an effort to link the many disparate events under a single umbrella. This year it runs from May 3rd to 24th.
“It’s a marathon, not a sprint anymore,” says Sarah Natkins, the New York head of Camron, a publicity firm that represents many of the city’s most influential young design brands. This month, Camron will host some 23 events around the city ranging from a VR-enabled exhibition at The Future Perfect, to a show of female designers curated by Matylda Krzykowski at Chamber, to launches at the MoMA Design Store.
It’s a crowded calendar that puts an onus on brands to break out with unconventional presentations and memorable collaborations—to debut new work not seen in Milan that can capture hungry social media-savvy audiences. While some systems exist to support young designers at the various fairs, it can still be costly to participate, with entry-level events starting at about $10,000–$20,000. And though New York presentations don’t reach the massive proportions of their Milanese counterparts, budgets are only limited by the scale of a designer’s imagination. 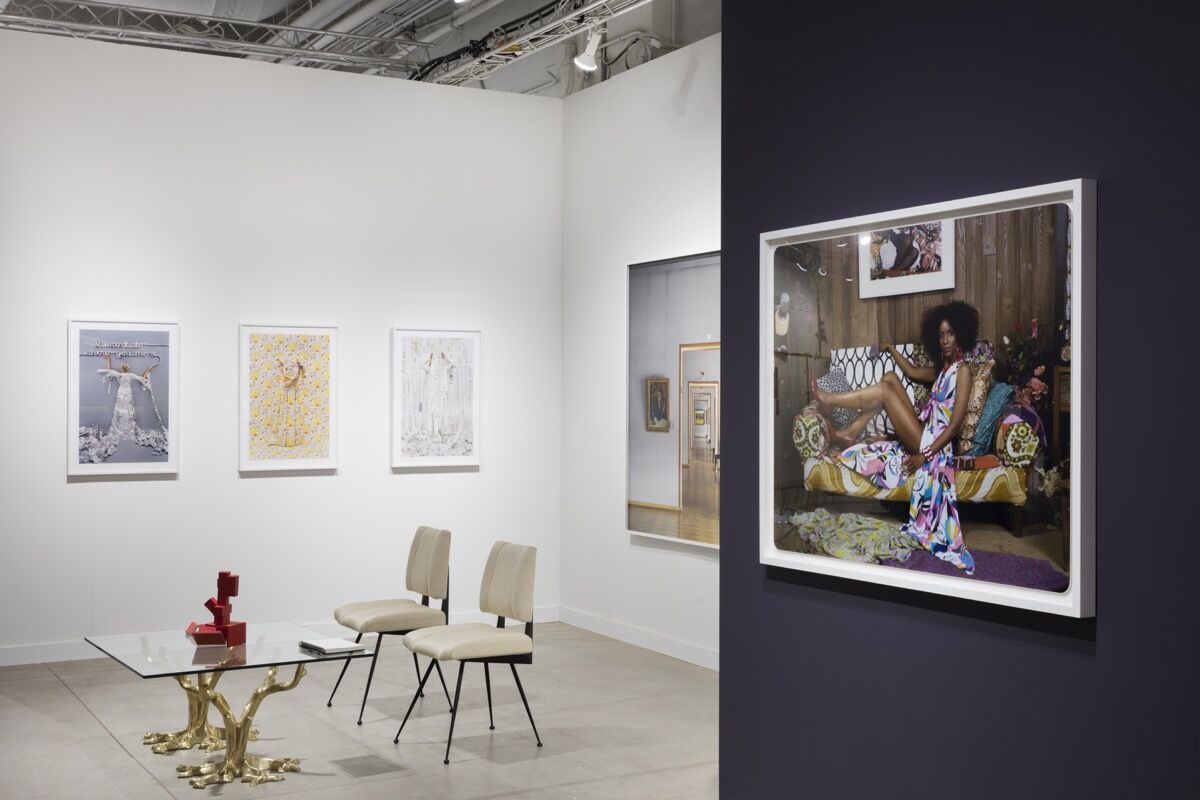 Advertisement
New York design “week” this year is spread over three weeks, but usually—and again in the future, when ICFF returns to its ordinary place on the schedule, closer to mid-month—it lasts about two. In addition to ICFF, a handful of smaller fairs anchor the calendar, beginning with Collective Design, which celebrated its fifth edition last week. The brainchild of Steven Learner, Collective is known for mixing art with collectible furniture and design. This year’s fair included ceramics from South Korea and brands like Apparatus; booths from photography galleries Yancey Richardson and Yossi Milo; a silver tinsel entryway-installation by the Rockwell Group; and even a pop-up of Marc Jacobs’s Bookmarc shop. An architect and designer himself, Learner started the fair when he tired of having to leave the city to discover great design at fairs like Design Miami/. (“Design Miami/’s great, New York has nothing, and it’s not okay for New York to be second to Miami,” he recalls thinking.)
“There are 55,000 designers working in New York—it’s more than twice as many as the next two largest concentrations, in Los Angeles and Paris,” Learner explains. “That market needs to be served. We have more curators, collectors, museums, galleries—it is a concentration.”
Like Collective, Wanted Design, which hosts events in Brooklyn’s Industry City (May 17–23) and Manhattan’s Terminal Stores (May 20–23) this month, grew out of the need for a forum for substantive design conversation at a time when new design communities were emerging in cities from Detroit to Seattle. Founded in 2011 by Odile Hainaut and Claire Pijoulat, Wanted Design takes a distinctly international approach, bringing together contingents of new talent as part of group exhibitions representing Mexico and Holland, along with homegrown design initiatives like the American Design Honors (which this year celebrates Eugene, Oregon’s Studio Gorm).
“[New York has] a design festival that’s attracting more and more international visitors and international backing, because New York is a city that people want to come to,” notes Hainaut. “And the U.S. market is a key market for all international brands, so I think it was needed and successful the way NYCxDesign is growing.”
As events have popped up around the city, ICFF has grown rapidly as well, and it too has expanded its focus to include more special sections including the ICFF Gallery and the Luxe Interiors and Design Pavilion. In fact, since 2014 alone, the fair has more than doubled in size. 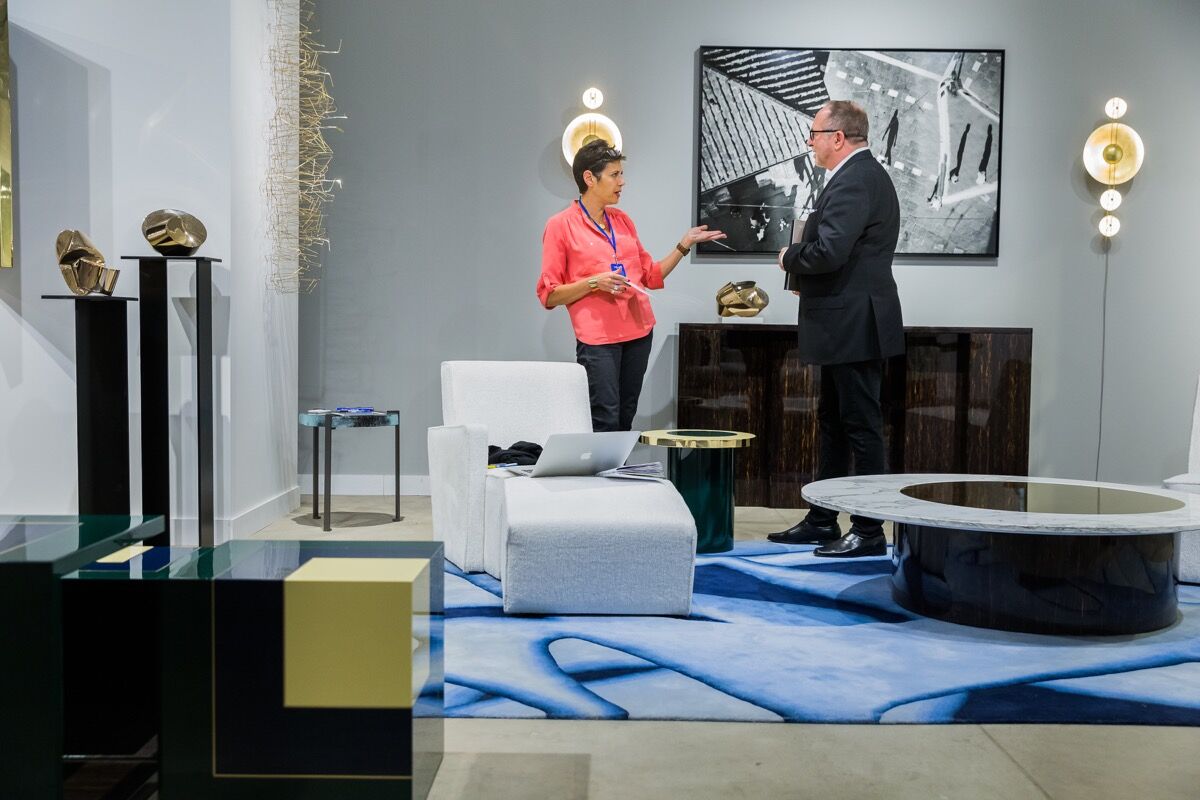 The strength of the show underscores the fact that the U.S. economy has recovered since the financial crash a decade ago, while Europe still struggles to bounce back. It also offers designers from emerging economies an audience that may be willing to spend more for design than in their local markets. While the city’s Economic Development Corporation hasn’t released attendance numbers from previous editions of NYCxDesign (it’s a key goal this year), the event’s impact is certainly felt around the city, and it’s something they plan to continue to grow, looking at international events like Salone for inspiration. “Our goal is to make it feel like wherever you are in the city you’re aware that it’s NYCxDesign,” says Ed Hogikyan, the EDC’s SVP of marketing.
The growth of design week’s presence in New York reflects an increasing appetite for design from the general cultural community, thanks in part to the popularization by online publications and tastemakers like Sight Unseen, which was founded in 2009 and launched a fair of their own, Sight Unseen OFFSITE in 2014 (originally it was called the Noho Design District).
Like many at the time, founders Monica Khemsurov and Jill Singer noticed there was a new wave of designers emerging in New York that weren’t finding employment with major brands after the financial crash. But in recession-shocked New York, these creatives struck out on their own, building a network of design, manufacturing, and retail in the city led by brands like Roll & Hill,
Fort Standard
, and
Calico Wallpaper
. At the same time, a new wave of galleries like Friedman Benda (which is currently celebrating its 10th anniversary) emerged, offering support to young designers like Misha Kahn, who were working in a conceptual rather than commercial vein.
For this year’s OFFSITE show (May 19–22), the Sight Unseen team is scaling back from 75 exhibitors to 24, to focus on polished brands like Iacoli & McAllister and Moscow’s
Crosby Studios
, as well as projects like a VR exhibition with online art seller Twyla. 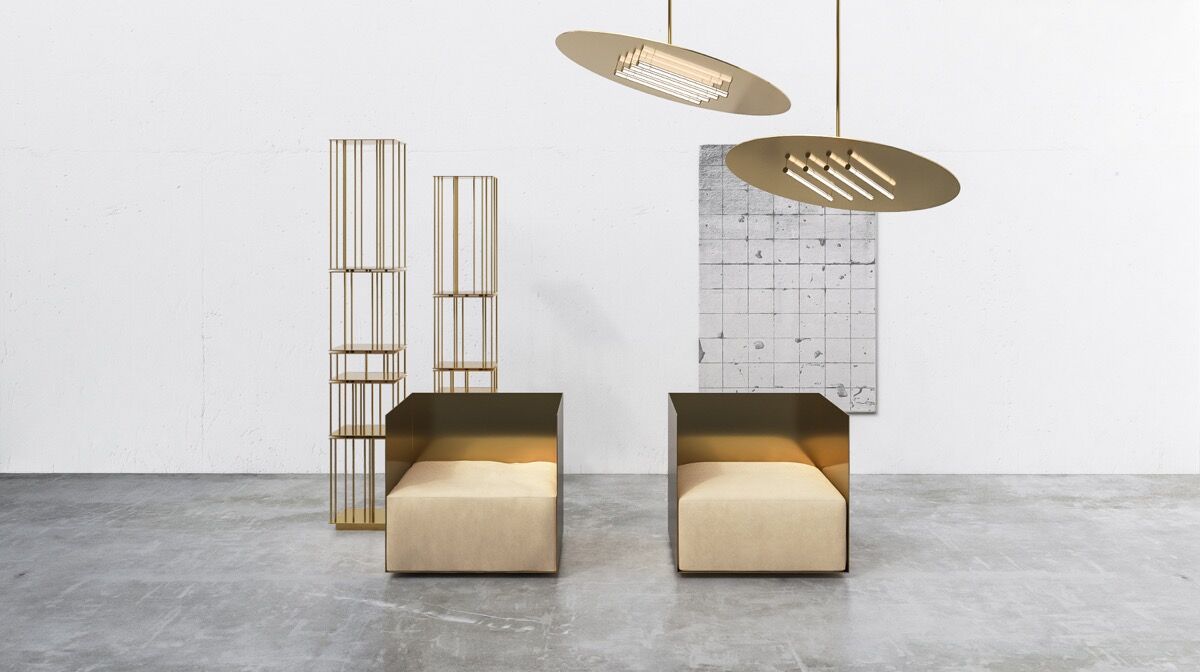 “A great strength of New York’s design month that’s even better than in the past is this sense of having lots of small presentations all over the city that are new work, interesting voices, not just the same old stuff, really thought-out considered presentations—exciting experiences and environments in which to see design,” says Khemsurov. This year they’ll be bringing design brands to venues around the city, including Lalito and Mission Chinese, through the Sight Unseen Presents initiative. “Fashion Week takes over New York. Why does Fashion Week get to take over New York and design week is just something that happens for a small niche of people? Let’s integrate it into food and fashion and lifestyle and take over.”
As events proliferate around the city, many now see New York as an established design destination in its own right. Early last week, Natkins found herself at a post-event dinner, talking shop with about two dozen members of the city’s design community—a scene that, she notes, felt more like Milan than earlier editions of New York’s design week. And she’s not alone.
“I think we are must-see at this point. NYCxDesign is in its fifth year, firmly planted,” says Learner. “Except for the apocalypse, we’ll be back here next May.”
Heather Corcoran
Related Stories