How Cai Guo-Qiang Built a 1,650-Foot-Tall Ladder out of Fire

Alexxa Gotthardt
Oct 10, 2016 9:56am
In 1996, artist
Cai Guo-Qiang
was the first person with a Chinese passport to enter the U.S. Government’s nuclear test site in Nevada. Unbeknownst to authorities, he was also packing explosives.
“I like taking risks. That’s what drives my work,” Cai explains, a wide smile spreading across his face. We’re sitting in a sunlit room of his studio in New York’s East Village discussing one of Cai’s earlier works, now captured as a scene from Sky Ladder, a documentary about Cai’s life and work, which debuts on Netflix this Friday. The biopic takes its name from the 1,650-foot-tall ladder of fire the 58-year-old artist dreamed up as a child—and after years of research and many failures finally managed to create last June. “I’m like a little boy trying to make something bad or something big, but in the end I scare myself and no one else.”
In the footage from 1996 we’re watching, the Quanzhou-born, New York-based artist is perched on a desert ridge belonging to the Nevada test site when a mass of smoke explodes from his hand, as if conjured by some almighty force. The Century with Mushroom Clouds: Project for the 20th Century (1996), as the performance has become known, began with Cai fashioning homemade explosives from Chinatown firecrackers and ended with him setting them off, in his own palm, over a 300-meter-wide crater that the U.S. military’s early experiments with atomic bombs left in their wake. It was risky, indeed. (Being nabbed by the U.S. Government for harboring illegal contraband isn’t everyone’s idea of fun.) But as Cai gazes out into the desert sky, he doesn’t seem the least bit scared—instead he’s calm, even happy, as if cementing in that very moment a passion and curiosity that would come to define his life’s work. 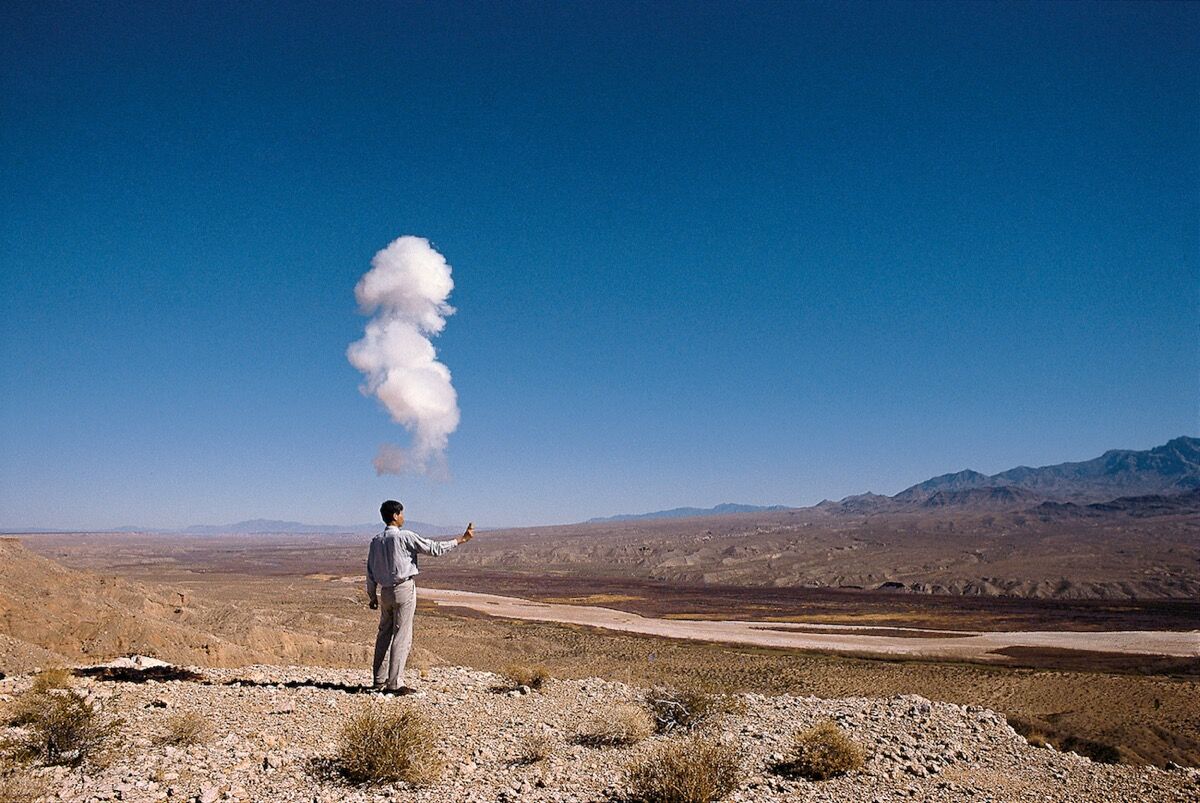 Advertisement
Century with Mushroom Clouds is one of Cai’s earliest outdoor experiments with gunpowder, an unconventional medium that has become inextricably linked to his practice. He’s harnessed its volatile power for the past 30 years, filling canvases with wild sprays of sulfur and patches of night sky with bursts of fireworks (now known as his signature “explosion events”). And while the nuclear test site project only makes a brief cameo in the film, it seems to capture the artist’s essence—one that’s much more complex than he generally lets on.

“As an artist, you inevitably have different conflicts with the world, with the country in which you’re working, with history—it’s unavoidable. But this is life, this is the truth.”

The afternoon I speak with Cai, he’s admittedly nervous. It’s a rare state of mind for the artist, who’s made a habit of realizing seemingly Sisyphean tasks—like extending the Great Wall of China 10,000 meters with a string of explosives in 1993 or choreographing a 9.3-mile-long fireworks display for the 2008 Beijing Olympics. But just days before Sky Ladder becomes available to over 83 million Netflix subscribers across the globe, his brow furrows as he considers the film’s future. “The museum is a system that I understand. I know that if I have a show, people will come. But I have no idea if anyone will watch this film. No one knows,” he says, laughing timidly.
For the last 15 years, Cai has become accustomed to drawing big crowds. His 2008 solo show at the Guggenheim, the museum’s first for a Chinese-born artist, was also the museum’s second-highest attended show up until that point in time. Around one billion people are estimated to have ogled his Beijing Olympics fireworks worldwide, a figure that represents nearly 15% of the world’s population. But starring as the subject of a feature-length documentary—where eyes will be not only on his work, but also on him—has been a new and grounding experience for the artist. “It gave me the opportunity to re-examine the path that I’ve taken, and recognize the people who’ve helped me along the way—there are many,” he explains. He pauses, then chuckles: “It also reminded me of how old I am.” 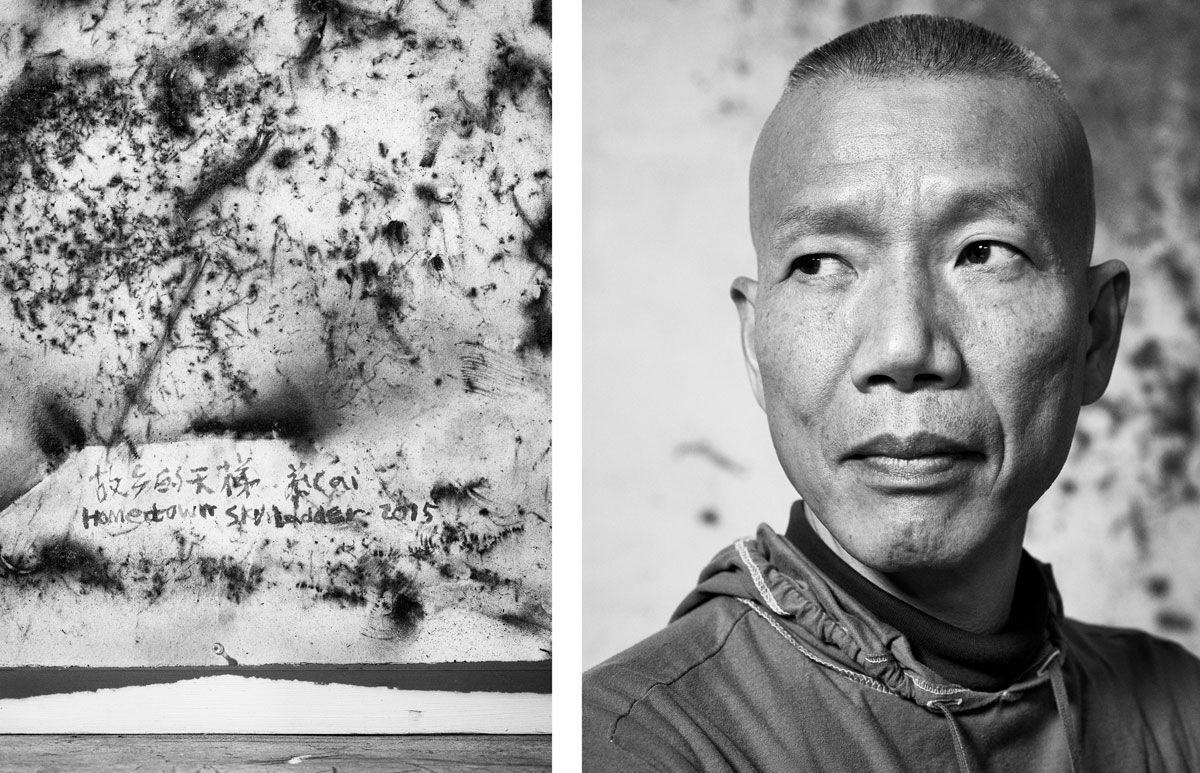 Detail of Hometown Skyladder (2015) and portrait of Cai Guo-Qiang in his East Village studio. Photographs by Alex John Beck for Artsy.

Cai is an energetic, kind-eyed man whose prolific career spans from his youth painting alongside his father (a traditional Chinese calligraphist) during China’s Cultural Revolution to his recent life as an art star, traveling almost weekly to mount museum exhibitions and orchestrate explosion events the world over. But while Sky Ladder gives a well-rounded glimpse into the trajectory of Cai’s artmaking, its Oscar-winning director, Kevin Macdonald (of The Last King of Scotland and Marley), and producers, Wendi Murdoch (who also serves on Artsy’s board), Fisher Stevens, and Hugo Shong, were more interested in exploring what makes the man tick.
“Though they might know my work, many people don’t know me,” Cai explains. “The film shows my past and how I function—things a lot of people don’t want to admit, or don’t want to show.” Cai is referring in particular to his relationship to China, the country where he was raised, where he’s realized many of his most ambitious projects, and where much of his family still lives. In the past 10 years, he’s worked with the country’s government on two major projects: the firework displays for the Beijing Olympics as well as those for the 2014 Asia-Pacific Economic Conference (APEC). In each instance, he has received flack from a number of critics who regard his involvement as an agent of the Communist Party’s propagandistic tactics.
“The audience often only looks at the end result and judges whether it’s a success or a failure; they question why, on the surface, I wanted to work with the Chinese government. But this perspective lacks an understanding of the very deep, personal, emotional attachment I have with the land,” Cai explains. “The film didn’t try to avoid any of those conflicts. And as an artist, you inevitably have different conflicts with the world, with the country in which you’re working, with history—it’s unavoidable. But this is life, this is the truth.”
Advertisement 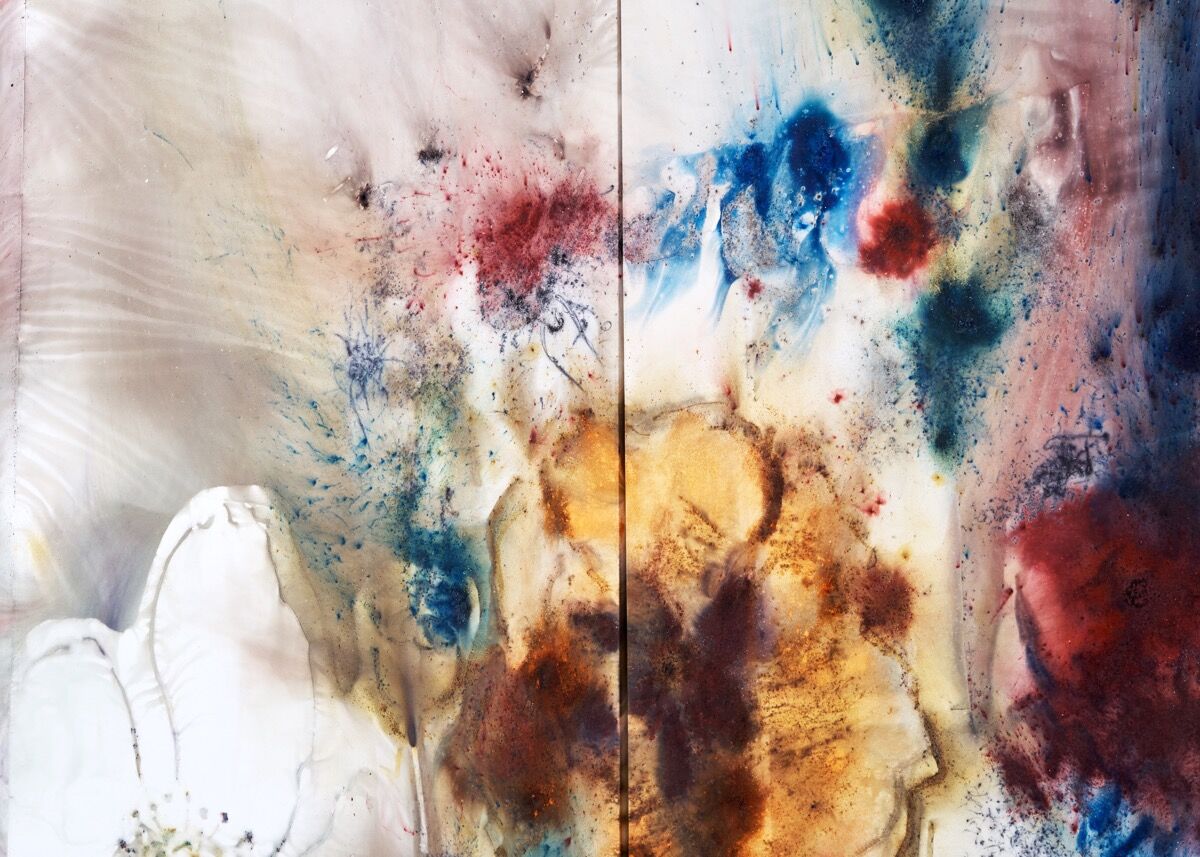 One of the film’s most powerful scenes comes when Cai finds himself in a room full of Chinese government officials—mostly middle-aged men sucking on cigarettes—as they pick apart his vision for the APEC project, one that, in the artist’s conception, would have broken the tradition of bombastic, gong-wielding Chinese ceremonies with an unconventional performance of moving images and abstract explosions. But, piece by piece, the more idiosyncratic aspects of Cai’s plan were cast aside by the powers that be. “First the video was gone, then the story was dropped. So now the risk is the ceremony might become a standard fireworks show. Why am I still here?” he narrates over footage of the meeting. On screen, an official chimes in: “You have to figure out something creative with all these chains on you. I’m a pragmatist. Mao taught us to be practical and realistic. So overall, our measures are in accordance with your idea. We’ll support you, only when you follow the rules.”
The frustration was palpable on Cai’s face through this scene, and something close to an eye roll was caught on camera. But regardless, the artist forged ahead with the project, despite his vision being almost completely compromised. “I feel that if I can contribute in some way to help the country—and maybe help the government to improve themselves—I have a responsibility to do that,” he tells me. But almost immediately after Cai put the APEC commission to bed, he redoubled his efforts on the secret project that would be called Sky Ladder (2015)—one that would completely circumvent the country’s government. It’s this piece that becomes the crux of the film and the lens through which Cai’s motivation is revealed.

2 Images
View Slideshow
Sky Ladder, as one shrewd viewer pointed out during a private screening of the film at Soho House in New York last week, has been Cai’s “Moby Dick.” The artist first attempted the piece in Bath, England, in 1994. But the project failed, due to airspace permitting issues and bad weather, as it did on two other attempts after: in Shanghai in 2001 and Los Angeles in 2012. “When he first started talking about it with me, it was his dream,” explains Cai’s wife Hong Hong, in the film. “And he has remained obsessed with achieving it ever since.”
In 2015, Cai set his sites for the project on a small fishing island, Huiyu Island Harbour, off the coast of his hometown in China. This time, he didn’t attempt to get government permits, and funded its execution completely himself. “Making Sky Ladder is like burning money,” Hong Hong laments onscreen, visibly upset. “Plus, we have to execute it all in secret. How many people will get to see it? We can’t even invite an audience. This time, Sky Ladder is just for Cai’s grandmother. That’s all.” 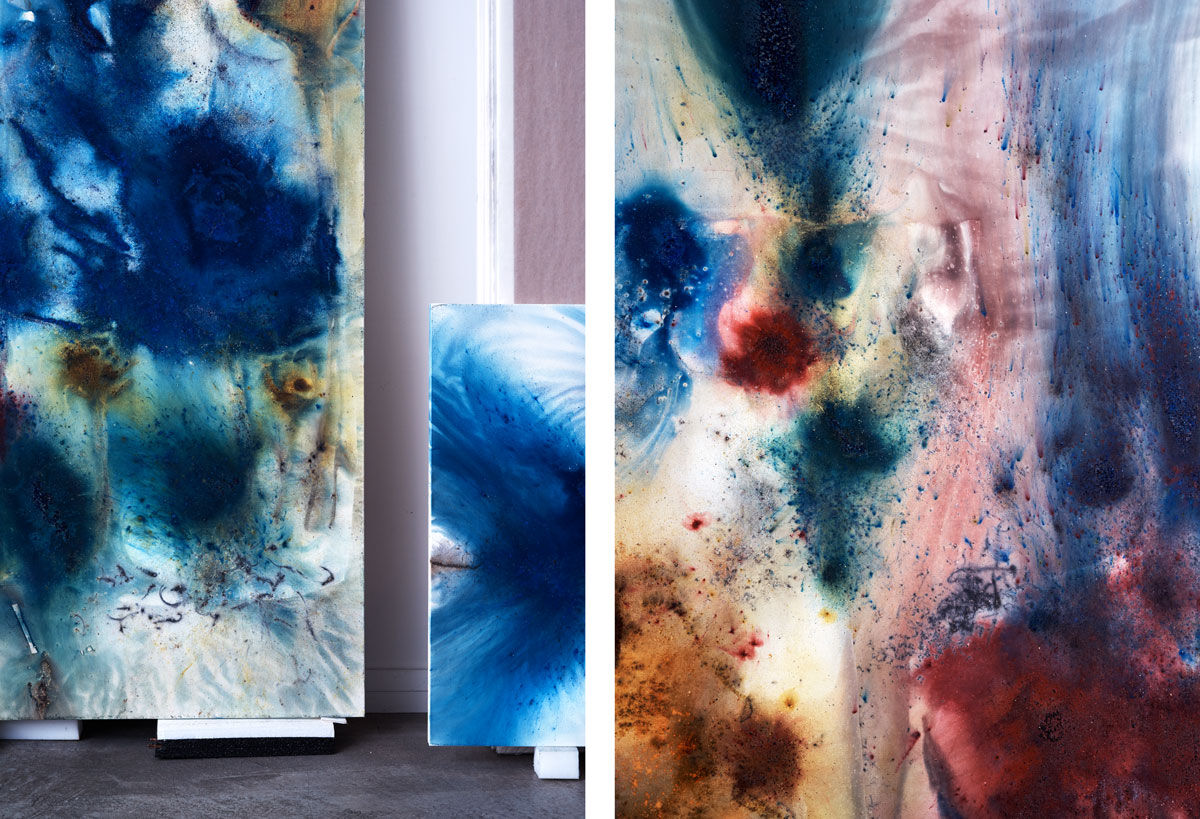 As Cai worked with members of his team, along with local villagers, to realize the project, he was also shuttling back and forth between Quanzhou to see his ailing grandmother, who had just turned 100 years old. “I’ve done projects all over the world, but my grandmother was never able to see any of them. She was always in China—this one was for her,” Cai explains. “It was a chaotic and emotional experience, with the worry of her passing prematurely mingling with the worry of the project.”
On the morning when Sky Ladder’s fuse was finally slated to be lit, Cai called his grandmother via video chat—she was too sick to make the trip. But as the countdown began, she watched the piece finally unfold on her screen, a wondrous lattice of fire rising into the dark, early morning sky for two minutes and twenty seconds. A month later, she passed away. “My grandmother was a very confident, prideful person. So this kind of project is very fitting for her,” Cai muses, gazing off into space. One imagines her climbing the ladder to a throne on high, connecting land to sky, the seen to the unseen.

“I don’t think any art is meant to be kept forever, immortal on the earth that we inhabit.”

“This project is one of those that I’ve used, since I was a young boy, to try and reach the sky and touch the clouds,” Cai explains, just hours before catching a flight to London, where the film will make its European debut at the London Film Festival. “Even though Sky Ladder has finally succeeded, my journey of continuing dialogue with the unseen world has not stopped,” he continues.
As our conversation ends, the film’s first line, delivered from Cai’s own mouth, springs to mind: “More than a thousand years ago, when the Chinese discovered gunpowder, they were actually looking for an elixir to make them immortal.” But Cai, despite the spectacle that his gunpowder paintings and explosion events have been known to whip up, isn’t out for immortality. “I don’t think any art is meant to be kept forever, immortal on the earth that we inhabit. What I attempt to achieve is a sense of the eternal from the ephemeral—to inspire a conversation with the greater universe.” And that’s something that everyone wants to watch, whether they live out their days on a small Chinese fishing island, or in downtown Manhattan.
Alexxa Gotthardt
Sky Ladder: The Art of Cai Guo-Qiang premieres on Netflix Friday October 14, 2016.
Cover image: Portrait of Cai Guo-Qiang in his East Village, New York studio by Alex John Beck for Artsy.
Further reading in Art