In 1923, the prominent art critic George Russell reviewed an exhibition mounted by the Society of Dublin Painters. The exhibition infamously showed a new work by the young artist Mainie Jellett, called Decoration (1923)—a gold-leafed, pentagonal abstraction based on religious symbols. In response to the portrait, Russell flew off the rails; he wrote that Jellett was “a late victim to
Cubism
in some sub-section of this artistic malaria” and a proponent of “subhuman art.”
Inti Guerrero, curator of this year’s EVA International (Ireland’s biennial of contemporary art), rightly refers to this passage as “Russell—the establishment—rejecting a female artist through a very patronizing critique.” Despite his reputation as a relatively progressive critic, Russell represented an institution not yet ready for a groundbreaking female artist. Russell even employed medicalized language comparable to “[degenerate] art, the pathology given by the Third Reich to modernist artists,” Guerrero told Artsy.
Other reviewers were kinder, but still confused. One referred to the work as “an insoluble puzzle.” Some spelled her name wrong. The Irish Times published a photo of Decoration alongside a wonky onion. The headline? “Two Freak Pictures.” 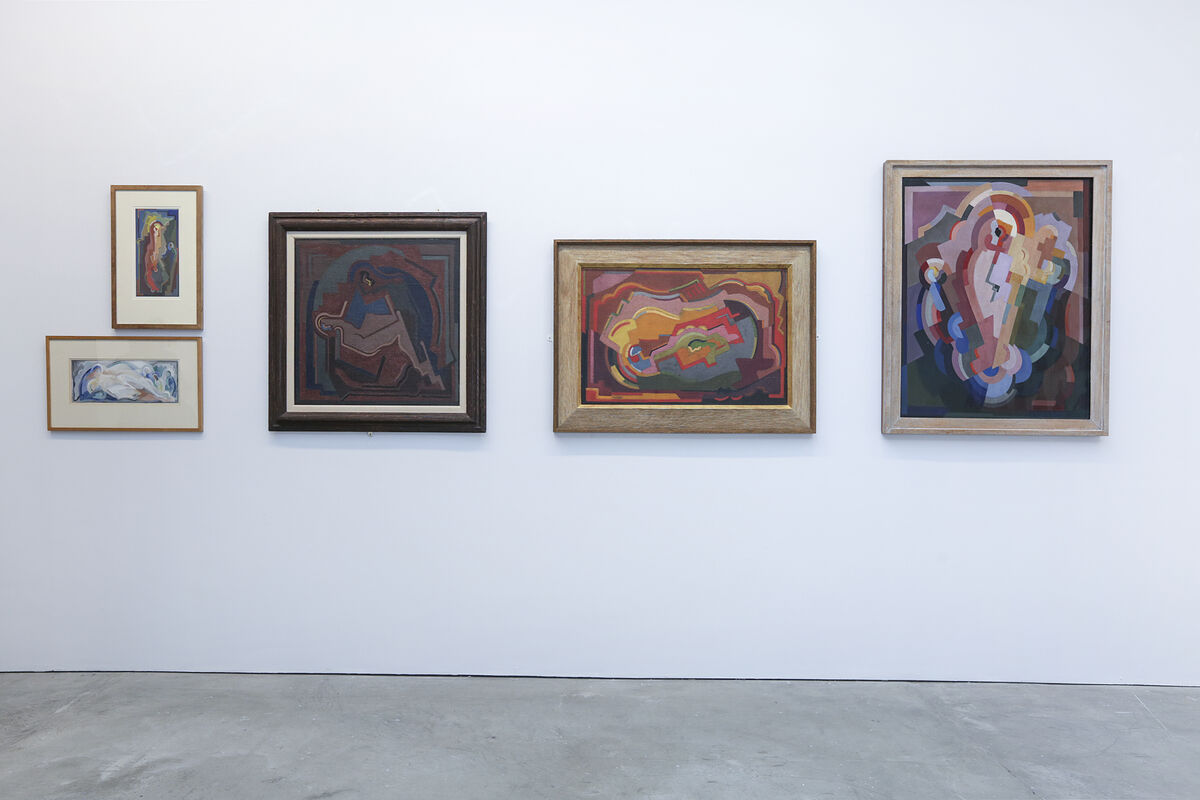 But by 1927, the Irish Times would herald Jellett as “the only serious exponent in this country of the ultra-modernist school of painting.” Today, she is remembered as “the woman who brought modern art to Ireland.” And, at this year’s EVA International (on view through July 8th), Jellett features in the exhibition as an iconic representative of Irish art with her own individual outlook on women’s bodies, industry, and religion. Guerrero marshalls her work to explore concepts of nationhood, light, and power, highlighting the resonances her early 20th-century paintings have with contemporary artists. Jellett has aged gracefully.
The artist was born Mary Harriet Jellett on April 29, 1897, to a barrister and a musician in Dublin. Guerrero notes that, though it was the turn of the 20th century, her childhood unfurled “during the final decades of the Victorian era in Ireland.” The family had a strong appreciation for the arts and wished for their daughter to pursue writing. Preferring the visual arts, Mainie (the nickname she adopted) Jellett left for London to study at the Westminster School of Art in 1917.
Jellett’s biographers often tell her early story through the artists with whom she studied. In London, it was
Walter Sickert
, who is acknowledged for his role in catalyzing modern art in Britain. Like Sickert, Jellett pursued change. Guerrero remarks that she was “always pushing the limits, in every context she was in.”
At Westminster, she met a like-minded student, Evie Hone, with whom she would travel to Paris to work in
André Lhote
’s studio. Lhote’s forms—unlike pure, abstract Cubism—were derived from nature. “With Lhote I learnt how to use natural forms as a starting point towards the creation of form for its own sake,” Jellett would later write, “to produce work based on a knowledge of rhythmical form and organic color.” Advertisement
Though Lhote taught Jellett the Cubist approach,
Albert Gleizes
would radically alter her perspective. Jellett must have been eager for such a theoretical yet dynamic instructor—she and Hone literally turned up on the artist’s doorstep, asking to be taught. Gleizes was, reportedly, terrified. He insisted he didn’t teach, but Jellett and Hone insisted right back: “What you do corresponds exactly to what we are looking for.”
But despite her famed instructors, Jellett’s work was entirely individual. She, like all the best students, took what she learned from the masters and made it her own.
To start, Jellett returned to Ireland in 1923. “She wanted to be a modern painter in the national narrative of her homeland. She felt that that was her path,” said Guerrero. After the scathing Decoration reviews, she continued to challenge the Dublin art world, through lectures, teaching, and exhibitions. Her redemption was swift. She went from being perceived as artistic malaria to being represented in the Irish section of the exhibition at the 1928 Olympic Games. At the end of her life, Jellett even co-founded the Irish Exhibition of Living Art in 1943, an annual show celebrating art that didn’t subscribe to convention.
It makes sense that Ireland grew attached to Jellett, since the artist was always so attached to her country. Jellett’s work uniquely highlights key themes in her nation’s history; in particular, a reckoning with Irish Catholicism. As in Decoration, much of Jellett’s work harmonizes two seemingly incongruous features: the cutting edge of abstract art and deeply religious principles. Especially in her pieces from the 1920s, her compositions are geometric and two-dimensional, yet one can make out shapes resembling altars, halos, and the
Madonna and Child
. For Jellett, this wasn’t a contradiction at all. Guerrero points out that “certain
Medieval art
quoted in her work was already abstract and two-dimensional, such as the flatness of golden backgrounds in icon portraiture.” In this way, abstraction was a superior means of representing religious symbols compared to, say, realism. In these reinterpretations of Catholicism, Guerrero sees and feels “the modern metropolitan age of the 1920s, the acceleration and sound of machines, the development of industry.” When Jellett was in Paris, there was a new spirituality, what
Le Corbusier
appropriately termed l’esprit nouveau. It was a secular spirituality that Jellett contrasted with religious spirituality—one that also appears in her deep fascination and conflict with women’s bodies.
In her “recurrent and obsessive abstractions of the Madonna and Child,” Guerrero says, “some compositions appear as representations of basically a transforming female body holding a newborn.” There’s something mutant about these pietàs, something interior, psychological, anatomical. Her depictions are both an acceptance of and challenge to the most treasured maternal bond in Catholicism and art history.
At the same time as the biennial, there will be a referendum in Ireland to potentially repeal its Eighth Amendment—the 1983 law that criminalized abortion in the country. Guerrero calls it “the referendum to change history.” Appropriately, there’s an artist-led campaign for its repeal, and the campaign will hold a procession at EVA International. As banners and testimonies take the stage alongside Jellett’s work, the modern, accelerated, convention-defying spirit of this pioneering artist will acquire new meaning. Guerrero, for one, hopes that people will reconsider Jellett’s work in light of this.
Sarah Bochicchio
Related Stories