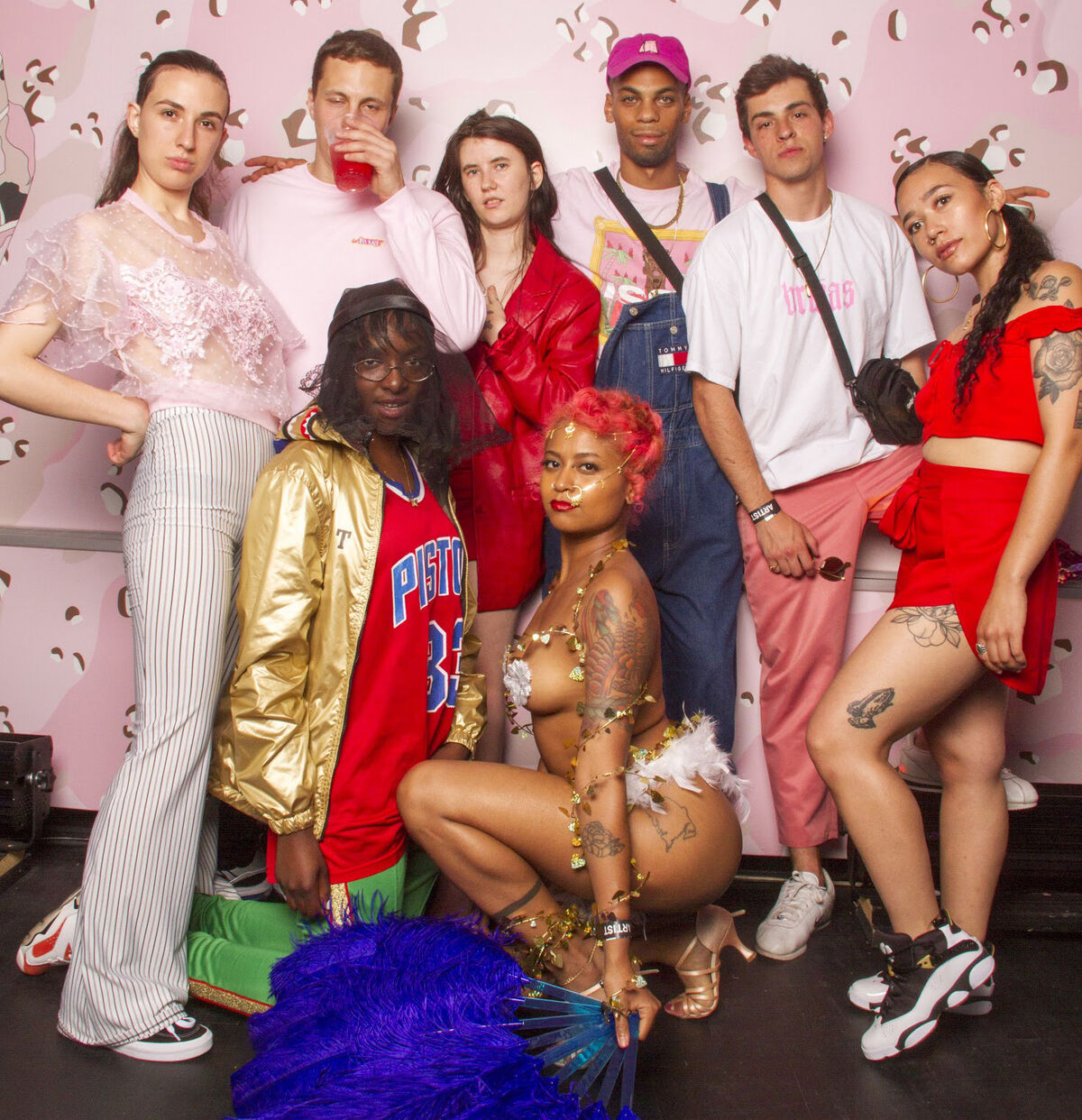 This spring, the East Village arts venue Performance Space New York temporarily turned over its premises to the feminist skaters of the art collective Brujas. With a two-week residency and free-will to transform the space, Brujas made it their own: They built a skatepark for individuals who may not usually feel welcome at a typical cement-laden park.
Brujas formed organically through New York’s skate scene in the 2000s, and emerged as a politically minded collective seeking ways to foster community through art, organization, fashion, and skateboarding. Whether they’re building a ramp for the New Museum, creating streetwear inspired by Michel Foucault, or holding a house party at Brooklyn art space Recess, the group’s work brings together worlds that don’t often intersect. And their residency at Performance Space, entitled Training Facility, was no different.
Decked out with skate obstacles, pastel-pink camouflage bleachers, and a library of political theory books (including volumes by Foucault and Malcolm X), the skatepark, created through a collaboration with industrial designer Jonathan Olivares, was a haven not just for skaters, but also for art lovers, activists, and bookworms, among others. In the press release, Brujas stipulated, “No Cops or Cool Guys allowed.”
“The cool guy thing is important,” said Brujas member and organizer Arianna Gil, who worked with Olivares to design the physical space. She explained that local skate shops often support aspiring skaters by giving them discounts and helping them set up their first boards and obstacles. But all too often, they end up encouraging only one kind of skater—“never a queer person, never a woman, and never a person of color in my experience,” said Gil. “It’s all white cis straight men who work the shops, own the shops, get sponsored, and come into the room like they’re cool.” 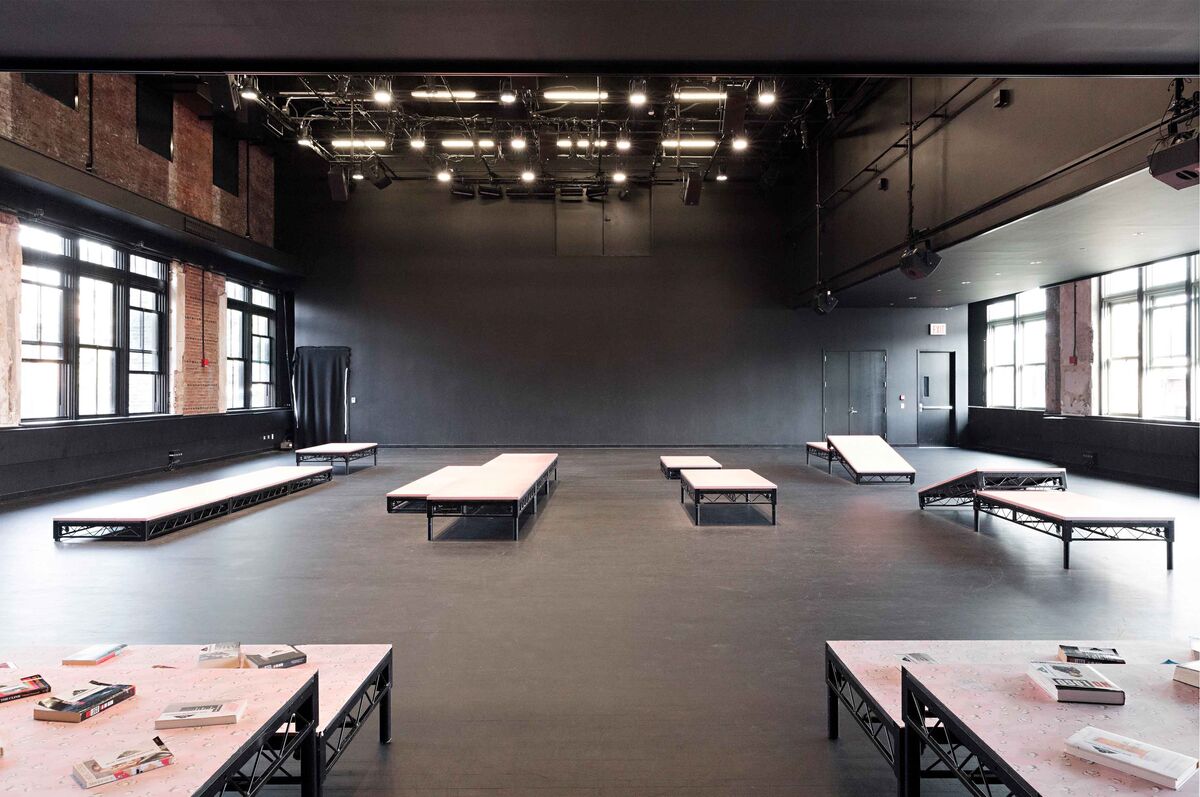 While working against this model, Brujas made their skatepark pink. The color is a touchstone of Brujas’s aesthetic identity, and is “growing to be a tonal symbol of the new, gender-free punk-wave,” the collective said in a statement. The residency also included a workshop on direct action to help skaters better protect themselves, and hosted a they/them skate session, where non-binary skaters were encouraged to use the space.
As Brujas brought their progressive skatepark to life with workshops, performances, and open-skate sessions, they also recreated a scene that is slowly disappearing. The residency’s title, Training Facility, is a nod to Tompkins Square Park, which was given the same nickname by skaters in the past, before the park was gentrified. Gil explained that as real estate prices began to soar in the East Village, developers began wiping out places to skate––including one park called 12th and A. “I was there every single day, and it had to close because neighbors were complaining,” Gil recalled. “There was this whole thing about controlling noise levels, then they just closed it.” (It later reopened with a strict schedule for skaters.)
Gil and her peers turned to Tompkins Square Park, but even that was changing; a nearby skate shop had shuttered due to rising rent, and each day, more police seemed to appear. It wasn’t long before skaters like the members of Brujas decided to take their boards uptown and to other areas on the Lower East Side.
Performance Space, just a few blocks west of Tompkins, not only became an opportunity for Brujas to build a skatepark, but a chance to reconnect with the place where they grew up skating. “We created an indoor Tompkins down the block from Tompkins,” said Brujas member Tabby Wakes. 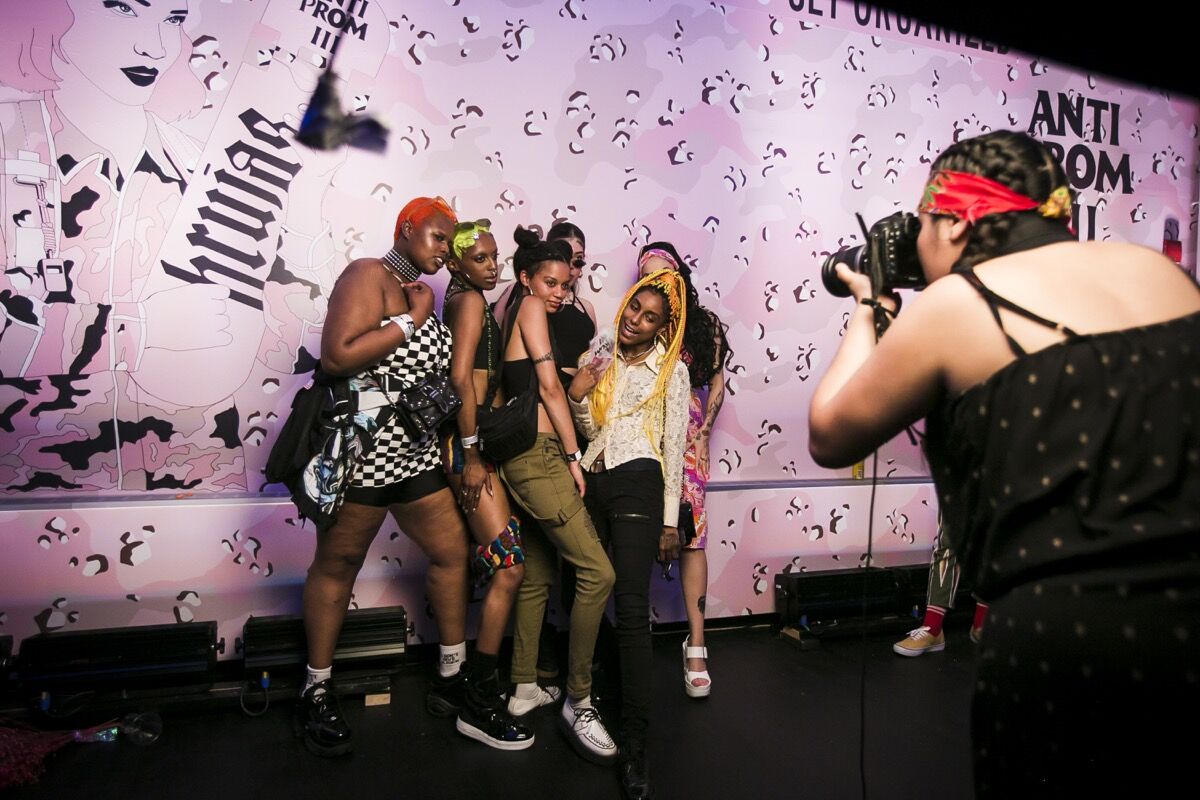 Advertisement
Brujas saw the residency as an opportunity to welcome in not just a diverse skate crowd, but also people who don’t skate. Events during the residency, like Brujas’s recurring Anti-Prom—a party dubbed the “Met-Ball of the underground,” where the likes of Cardi B and Young M.A. have performed in the past—and a performance by the web-based band Zhe Zhe attracted art and music lovers alike. At Zhe Zhe’s performance, for example, the audience represented a spectrum of age, race, and gender, from art-world curators to late punk-rockers, senior citizens to New York City high schoolers. “The art world is open to whoever, but it’s a matter of making people feel accepted and welcomed, comfortable,” said Wakes.
During an open skate session at Training Facility on a Sunday afternoon, Wakes was working the space to make sure skaters had signed waivers and everything ran smoothly. “I’m doing front desk right now, but today I came in and decided to ollie a bunch,” she explained. “Before this space, I haven’t had a lot of time to skate, but now I just kind of get to ollie over and over again until I’m good.”
Nearby, as one visitor perched in a windowsill paging through a book by Audre Lorde, skaters flew by, slamming their boards. One, with flushed cheeks and a sweat-covered T-shirt, was trying again and again to land the same trick. Their two braids flopped up and down as they took off and wiped out, then each time, got up with a grin. Thanks to Brujas, they had time and space to perfect that move.
Eli Hill
Cover image: Installation view of BRUJAS' Training Facility at Performance Space, New York, 2018. Photo by Daniele Ansidei. Courtesy of Performance Space New York.
Correction: A previous version of this article misstated that Brujas alone designed the skatepark featured in “Training Facility” at Performance Space New York. The collective worked in collaboration with industrial designer Jonathan Olivares.
Related Stories