At This Fictional Travel Agency, an Artist Takes Us on a Trip through Her Mind 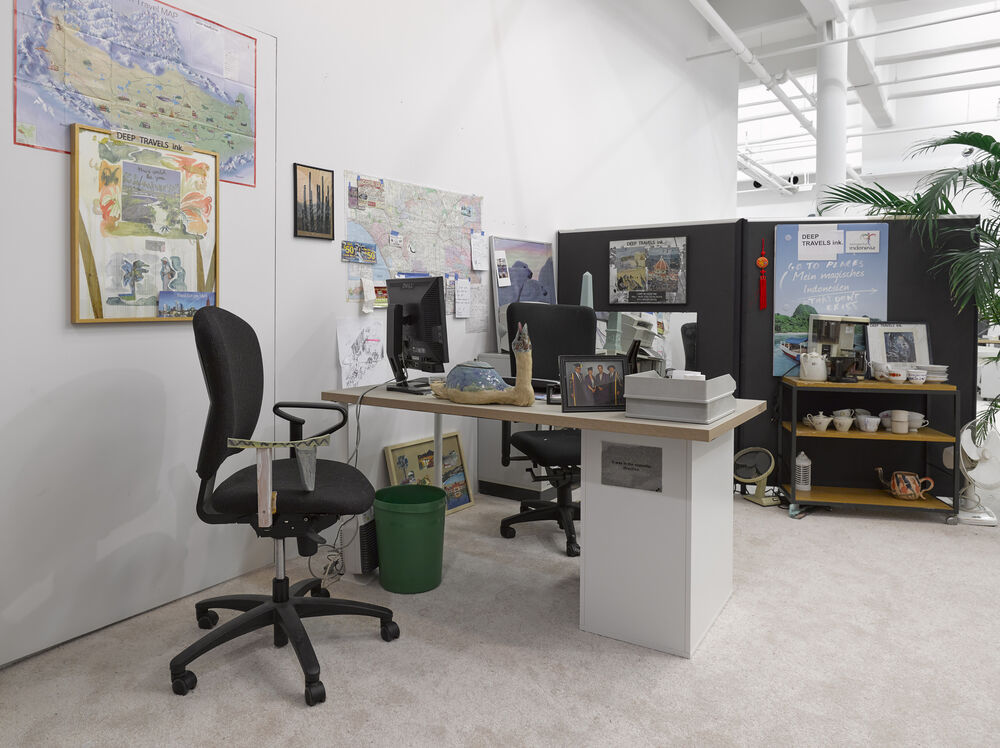 In New York, artist
Laure Prouvost
has recently opened a mammary-filled faux-travel agency that functions as a surreal playground for aesthetically inclined adults. The French artist has transformed Lisson Gallery into an immersive environment, dubbed DEEP TRAVEL Ink. No one’s on hand to help you plan a trip to Bermuda, but you can still engage with “employees,” of a sort.
After passing a reception area, you’ll enter a main room where sculptures with pink wood dust and resin breasts and buttocks sit in office chairs behind wooden desks. Screens are located where their heads should be, playing Prouvost’s films on loop. Visitors may watch scenes of waterskiing intercut with all-caps white messaging that flashes across the black screens. “I WAS SO PLEASED TO SEE YOU PUSH THE DOOR / TO COME HERE,” they offer. “I KNEW YOU WERE SOMEONE / WHO HAD TO GO DEEPER BY LOOKING / BACKWARD.” In the age of Cheaptickets.com and Kayak, who needs conventional travel agents anyway?
Prouvost engages each of her audience’s senses. In the reception area, she provides raspberries on a delicate plate, and a water cooler filled with chilled, fragrant tea. She welcomes her audience to touch everything in the show, from the quiet white carpet to the office supplies and books littering the desks. 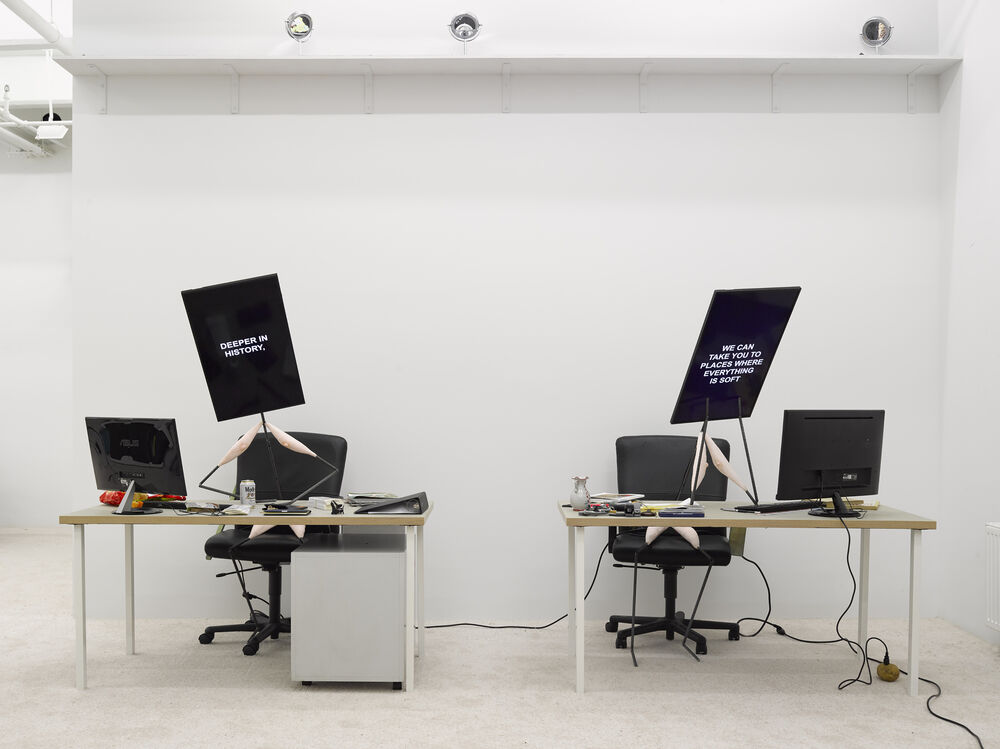 On top of the radiator, perceptive viewers will see four used tea bags. They’re an allusion to Prouvost’s former boss, British
Conceptual
artist
John Latham
. (She served as his assistant and claims he used to dry them this way.) Other quirky, easy-to-miss details abound. Visitors can use long sticks with small mirrors attached to find hidden text around the gallery, underneath desks and other surfaces. Cryptic messages include “COME HERE TO GO FURTHER” and “TICKET TO DEEP EXCHANGE.” Prouvost creates a treasure hunt, asking her audience to get closer and look more carefully at their surroundings. “You’re a protagonist in some ways,” she told Artsy. “It’s breaking the distance between the street and the art gallery. It’s not a very functional travel agency, but hopefully it takes you to a good place.”
Prouvost led Artsy on a tour of the agency, preserving the fantasy as she spoke. She maintained, throughout the entire discussion, that we were truly in an upstart business launched by her uncle; she’d merely come to New York to help him establish his first U.S. franchise. Of course, no such travel-agency-owning relative actually exists. “It gives me a way to create protagonists and characters,” she explains. “It lets you integrate different points of view, and you can say a thing you’d never dare say.”
Artwork by other “family members” fills the space. Prouvost’s “grandmother” once accidentally fell into a volcano, survived the experience, and made a commemorative painting that hangs on the agency’s back wall. These colorful, convenient, fictional relatives are a hallmark of Prouvost’s multidisciplinary practice. One of her most celebrated films, Wantee (2013), discusses the entirely made-up friendship between German
Surrealist
artist
Kurt Schwitters
and her conceptual artist “grandfather.” 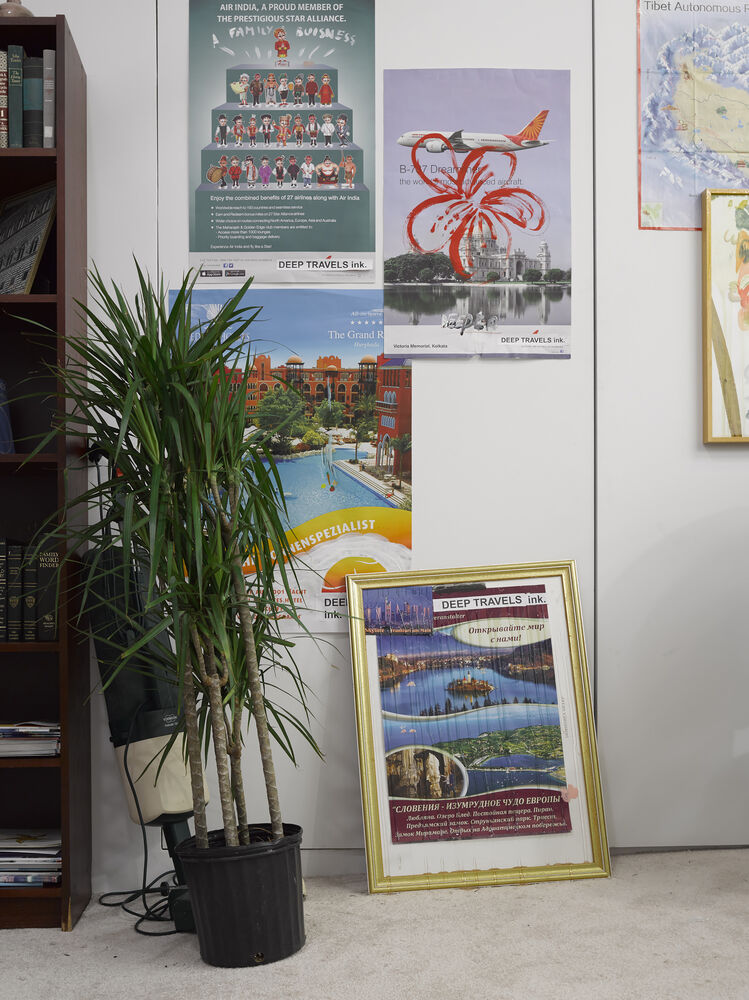 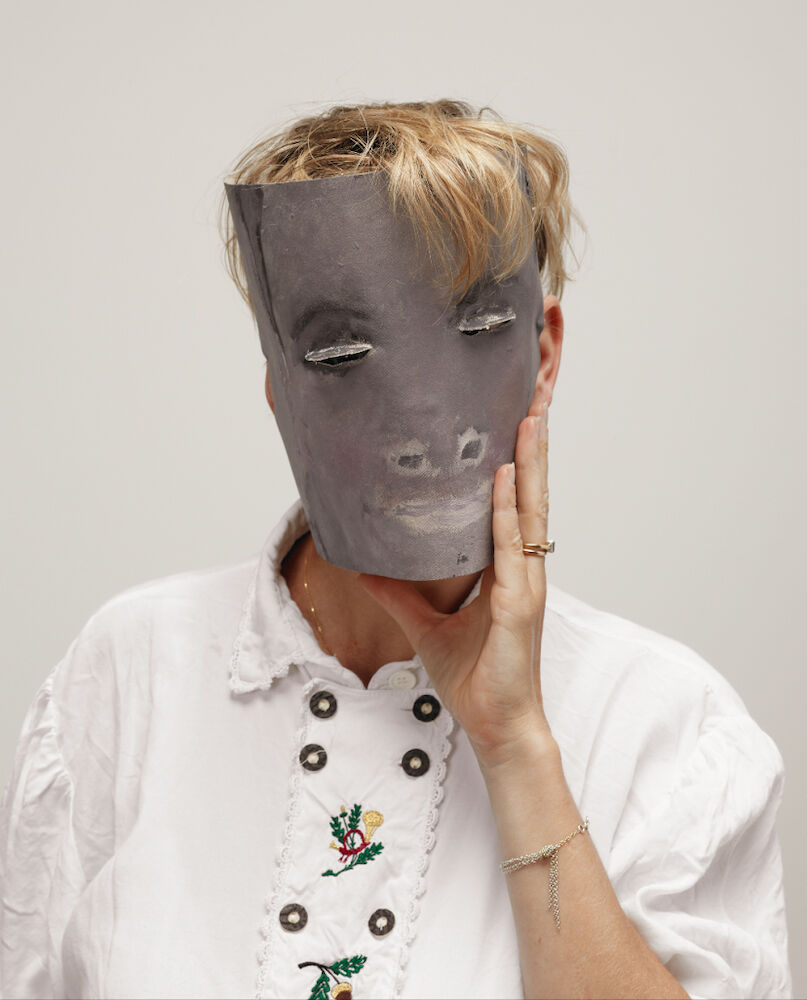 Advertisement
Prouvost, who lives and works in London and Antwerp, has already gained ample attention throughout Europe, acclaimed for disorienting films showcased in vividly imagined fantasy realms. In 2013, she won the Tate Museum’s prestigious Turner Prize; later this year, Paris’s Palais de Tokyo will honor her with a solo presentation. A major 2017 exhibition at Minneapolis’s Walker Art Center suggests her American audience is also growing. Lisson Gallery, which started in London, offers a perfect transatlantic link for the artist, and a platform to mount her most spectacular New York presentation to date. (It expands upon Prouvost’s 2016 show at Museum für Moderne Kunst Frankfurt, titled “all behind, we’ll go deeper, deep down and she will say:”; there, too, she constructed a fake travel agency and invoked her fictional grandparents.)
In the middle of this new iteration of the agency, a burbling fountain, “designed” by Prouvost’s “grandmother” and finally realized by the artist, features pink Murano glass breasts with red nipples that spurt water into a round white trough. During the tour, the artist invited Artsy to stroke the sculpture. She rubbed the fabricated breasts herself, as one might touch a small pet. Small orange fish swam around a submerged phone that the artist claims she dropped accidentally. With the wry humor evident throughout the entire show, Prouvost creates a prosaic denial of technology and contemporary communication. She destroys the machine responsible for many of our everyday interactions, relying instead on her art to connect with others and get her message across. (That said, no one at Lisson is preventing you from Instagramming every inch of the installation.)
A film, Into All That Is Here (2015), serves as the heart of the exhibition. Visitors enter the screening area through a curtain toward the back of the gallery, stepping onto a pungent dirt floor (if they don’t want to get their own shoes dirty, Prouvost fabricated pairs they can wear). The environment mirrors the content. On-screen, a protagonist serves as a stand-in for the viewer, attempting to find a path through a forest. Occasionally, the character’s hands appear, using a phone to find directions. A voice off-camera urges the viewer to go further, go deeper, to keep going. An erotic subtext builds, with quick shots of flowers and phrases (“we want you to get wet,” “will you leak my juices”) flitting across the screen; the sound of an explosion accompanied by images of fountains offers a not-so-subtle climax. 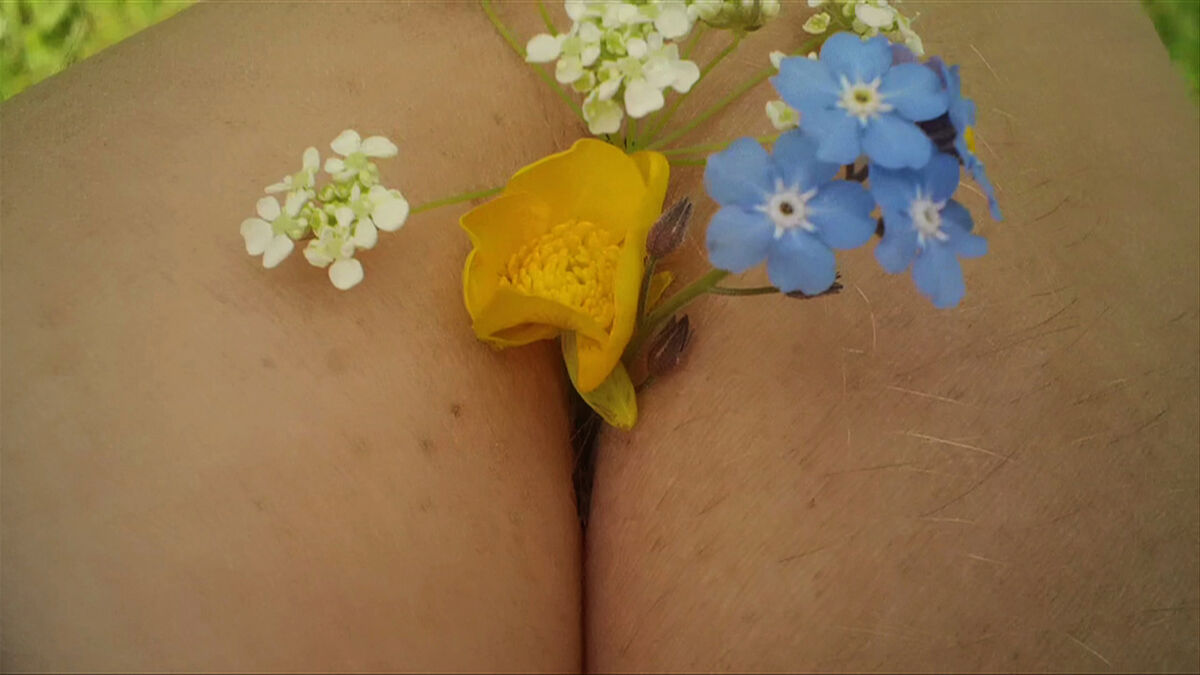 Laure Prouvost, Into all that is here, 2015. Courtesy of carlier | gebauer.

The flowers, as symbols of female sexuality, combine with the travel agency’s many bared breasts to suggest a strong feminist current in the show. At its core, the story of Prouvost’s alternate-reality grandparents is about how her “grandmother,” a victim of art historical misogyny, never got her due. In contrast, the art world celebrated her “grandfather,” whose male-gaze-laden paintings of a woman’s nude back and a breast appear behind curtains in the gallery. The travel agency gives Prouvost a platform to finally celebrate an underappreciated female artist (and problematize women’s objectification along the way). The fake relative becomes a stand-in for all female artists who’ve suffered the same fate and deserve more contemporary acclaim. “Now I give her a lot of space to grow,” says Prouvost of her unsung “grandmother.”
The near-pornographic text and audio in the films operate in service to perhaps Prouvost’s greatest interest: language itself. In text paintings scattered around the gallery, she offers such messages as “IDEALLY HERE BE SOME STAIRS TO GET HIGHER” and “IDEALLY HERE A NAKED KING WOULD WELLCOME YOU WONDERFULY” [sic]. She infuses words and phrases with myriad potential meanings, amassing them into a larger history of her work, her family, and art itself. Deliberate misspellings, strangely structured clauses, and homonyms, beginning with the name of the agency itself—“ink” instead of “inc.”—further highlight the theme.
Prouvost slyly manipulates her audience’s perspective with words: written on screens, travel brochures, artworks, and underneath tables. The quest for discovery and understanding leads to an uncommonly long, leisurely gallery visit. “ITS GETTING HOT AND HEAVY,” reads a portion of text from Into All That Is Here. “YOU HAVE FORGOTTEN YOURSELF INSIDE ME / TRAPPED INSIDE / SWALLOWED IN PLEASURE.” In all her work, Prouvost offers a similar seduction. After you immerse yourself in her enchanted, sensual realm, you may find it difficult to leave.
Alina Cohen
Related Stories