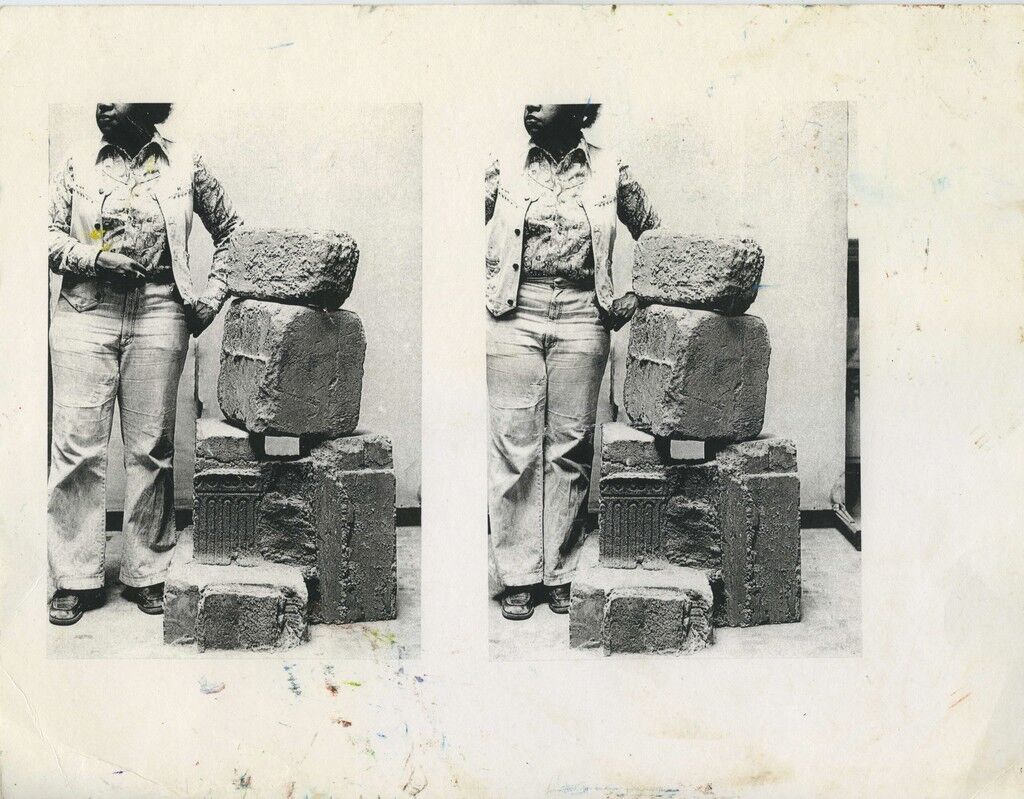 Beverly Buchanan
Untitled (Double Portrait of Artist with Frustula Sculpture)
"Beverly Buchanan – Ruins and Rituals" at Brooklyn Museum, Brooklyn
Beverly Buchanan
had a degree in parasitology from Columbia, two alter-egos (Ms. Bunny and Ms. Porno), and a penchant for selfie-taking and what she described as the “essential lunch:” greasy fried chicken, potato salad, collard greens, watermelon, and, the most important ingredient, a bourbon float. She also made art and produced, over her lifetime, a powerful and undersung body of work that is currently getting its due at the Brooklyn Museum.
Last week, “Ruins and Rituals,” the most comprehensive retrospective of Buchanan’s practice to date, opened quietly in the Brooklyn Museum’s Sackler Galleries, launching the museum’s year-long program, “A Year of Yes: Reimagining Feminism at the Brooklyn Museum.” Buchanan was a charismatic and visible member of the 1970s and ’80s New York art scene. She studied under
Norman Lewis
at the Art Students League, showed work in a buzzy exhibition curated by
Ana Mendieta
at the feminist art hub A.I.R. Gallery, and rubbed elbows with influential curators, gallerists, and critics like Lowery Stokes Sims, Betty Parsons, and Lucy Lippard. Nonetheless, her work rarely appears in history books or canon-shaping exhibitions.
But it’s not difficult to hypothesize why. Buchanan, who passed away in 2015, was a black woman who lived in Macon, Georgia, for much of her adult life, during a time when art made by minorities and those living outside of urban centers was largely overlooked by the establishment. She also resisted categorization, as the exhibition’s curators pointed out during a walkthrough of the show.
“There was a tendency, particularly in the ’70s and ’80s, to pigeonhole artists—you were a woman artist, you were an artist from the South, you were a black artist,” explained Jennifer Burris, co-curator of the show along with artist
Park McArthur
, as we strolled past a button-down shirt covered in painted crosses, a totem-like sculpture made of pill bottles, and a postcard scrawled with the words “Here is a good solid woman,” each underlined emphatically with glitter. “Beverly tried her best to move fluidly between those and set them as background. She still acknowledged them as influences, but not as foreground.” 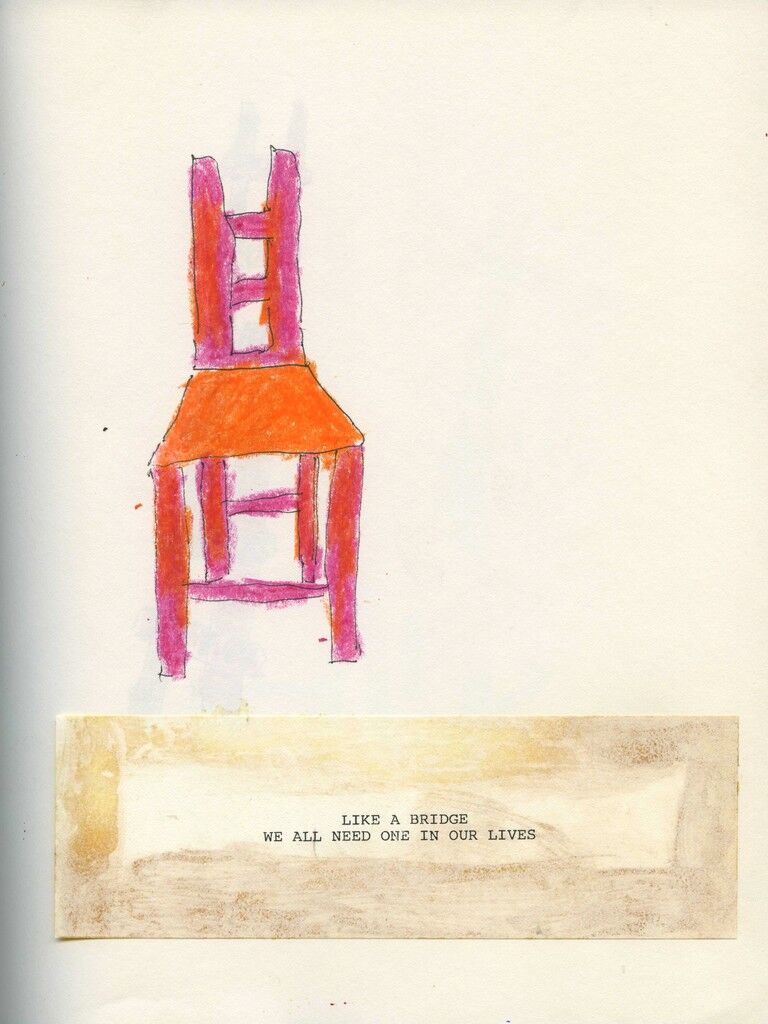 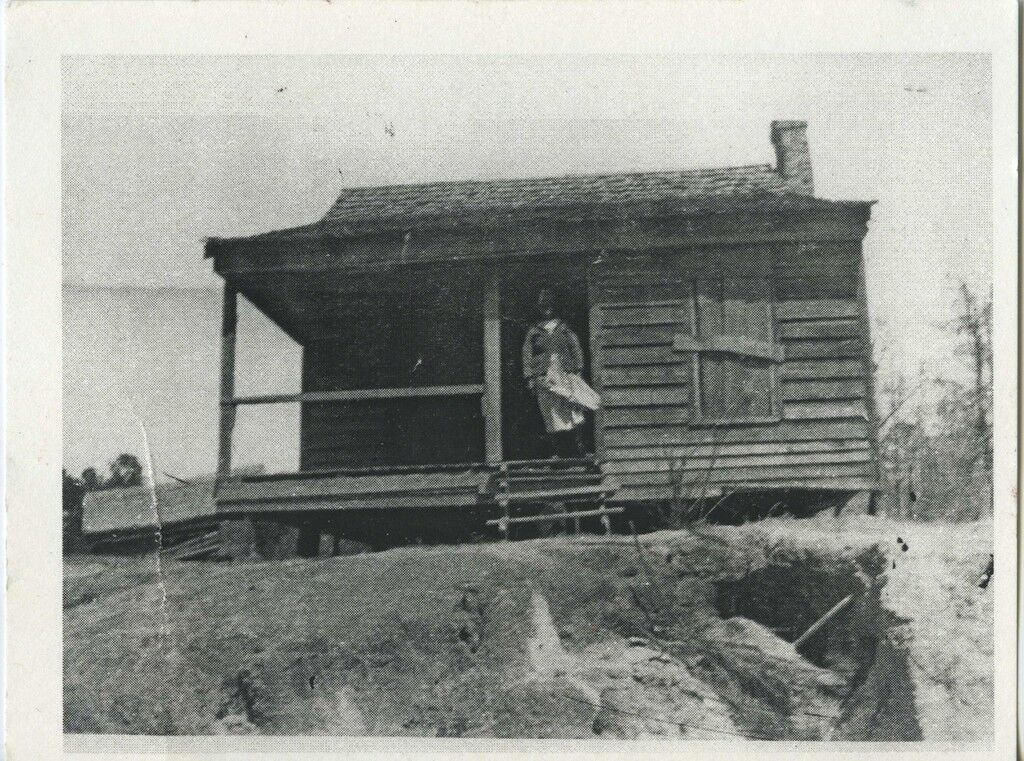 Beverly Buchanan
Untitled (Walter Buchanan Postcard)
"Beverly Buchanan – Ruins and Rituals" at Brooklyn Museum, Brooklyn
Across the tightly curated exhibition, the great variety represented in Buchanan’s work is made abundantly clear. Her art takes the form of stone pedestals, bric-a-brac assemblages, funny poems, self-portraits, and sculptural shacks. But potent themes of identity, place, and collective memory unite the works, uncovering the animus that runs through them: to connect with those around her and reckon with the history that shaped her communities.
“I believe the entire world is descendant from shacks,” reads a page from Buchanan’s illustrated book Shack Stories (Part I) (1990), which makes an appearance in the central room of “Ruins and Rituals.” Though small and housed in a brimming vitrine of ephemera, it feels like the thesis of Buchanan’s body of work, which manifests numerous references to the idea of home and the stories embedded within it.
Buchanan’s sculptural shacks are likely her best-known works. Twelve of them, the largest just 20 inches tall, stud a wide, oblong exhibition plinth, like a haphazardly developed village. They’re cobbled together carefully from found, splintering slats of wood and capped with tin roofs. They feel personal, intimate, and lovingly labored over. 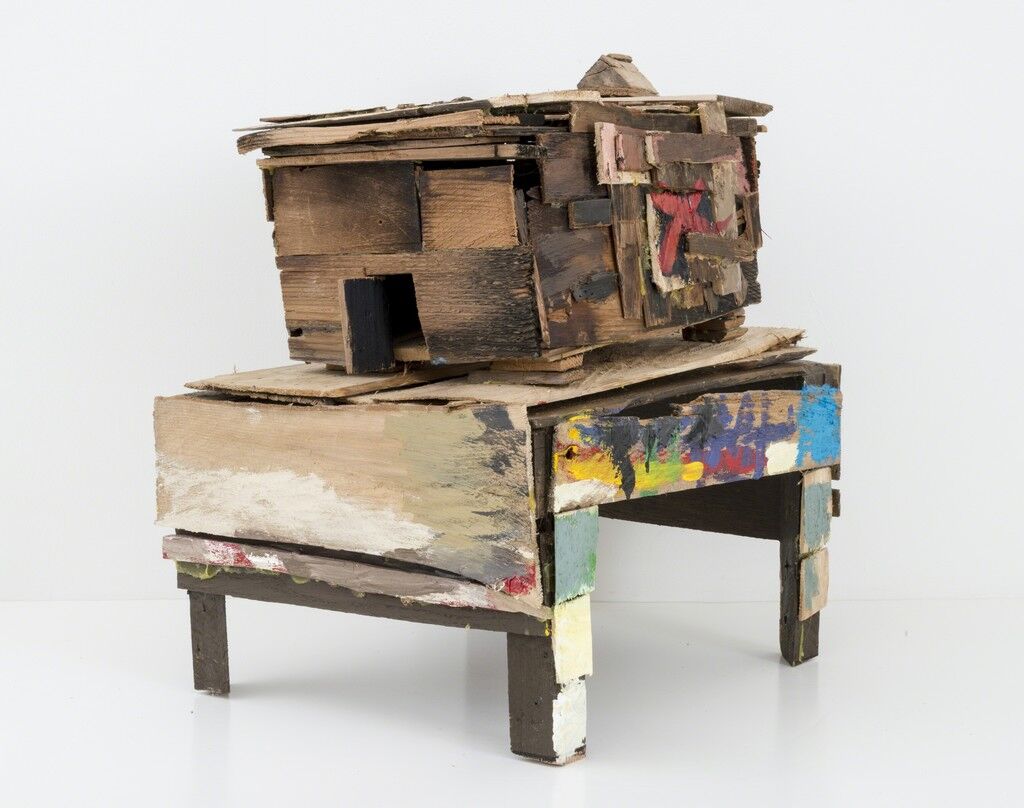 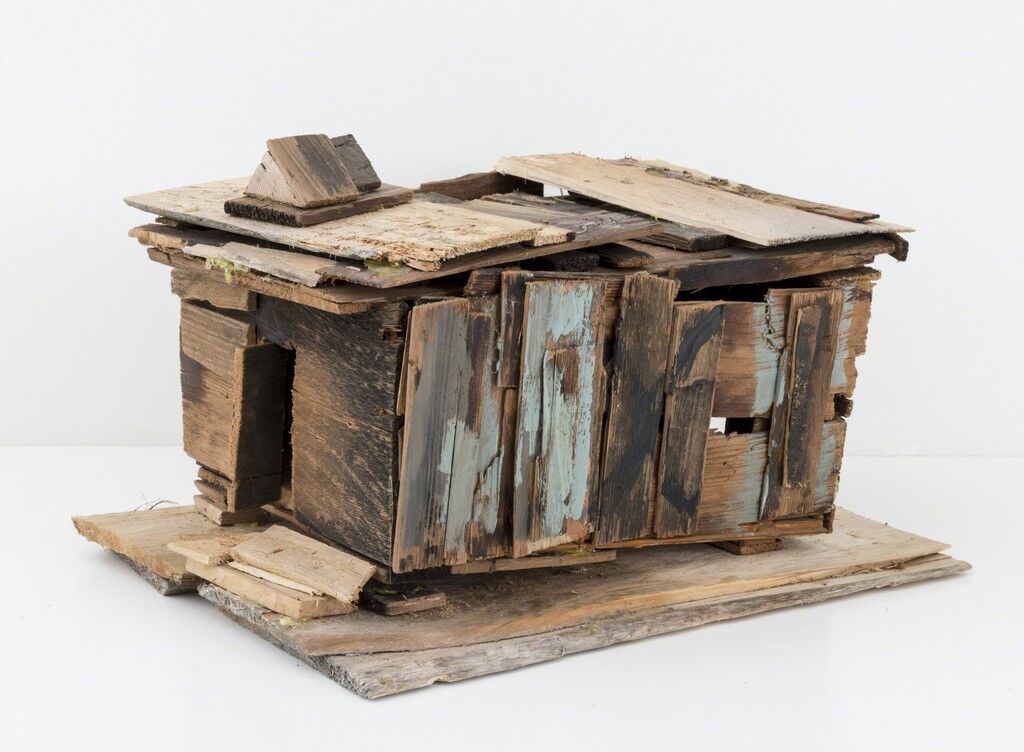 Beverly Buchanan
Old Colored School (detail), 2010
"Beverly Buchanan – Ruins and Rituals" at Brooklyn Museum, Brooklyn
Advertisement
But while many of Buchanan’s shacks are labeled with people’s names (some friends, some fictional, some heroes), they don’t often refer to a real home. “They’re really a patchwork narrative of multiple memories that Beverly had of different people and places,” explained McArthur. The artist spent much of her life traveling the rural South, researching different styles of small, self-made homes that originated as slave cabins. And, curious and kind-hearted as she was, she met many of their owners along the way. In the process, she accrued a vast taxonomy of structures and those who built them, which she later used as fodder for her work.
A trio of brindle shacks, in particular, serves as a vessel for multiple histories and the nexus of several integral aspects of Buchanan’s practice: race, violence, and collective experience. Titled Three Families (A Memorial Piece with Scars) (1989) and marked with charred walls, the huts were set aflame in Buchanan’s backyard. They are the remnants of several performances during which Buchanan ignited her shacks and left them for friends to extinguish. (One later version, titled Out of Control, 1991, is represented in the show through photo documentation.)
“Even though she made these works in the late ’80s or ’90s, she was thinking about her experiences as a student protester in Greensboro during the Civil Rights movement sit-ins,” McArthur said. “A lot of the emotion and experience of violence can be seen in the act of burning and the sculptures that you see here.” 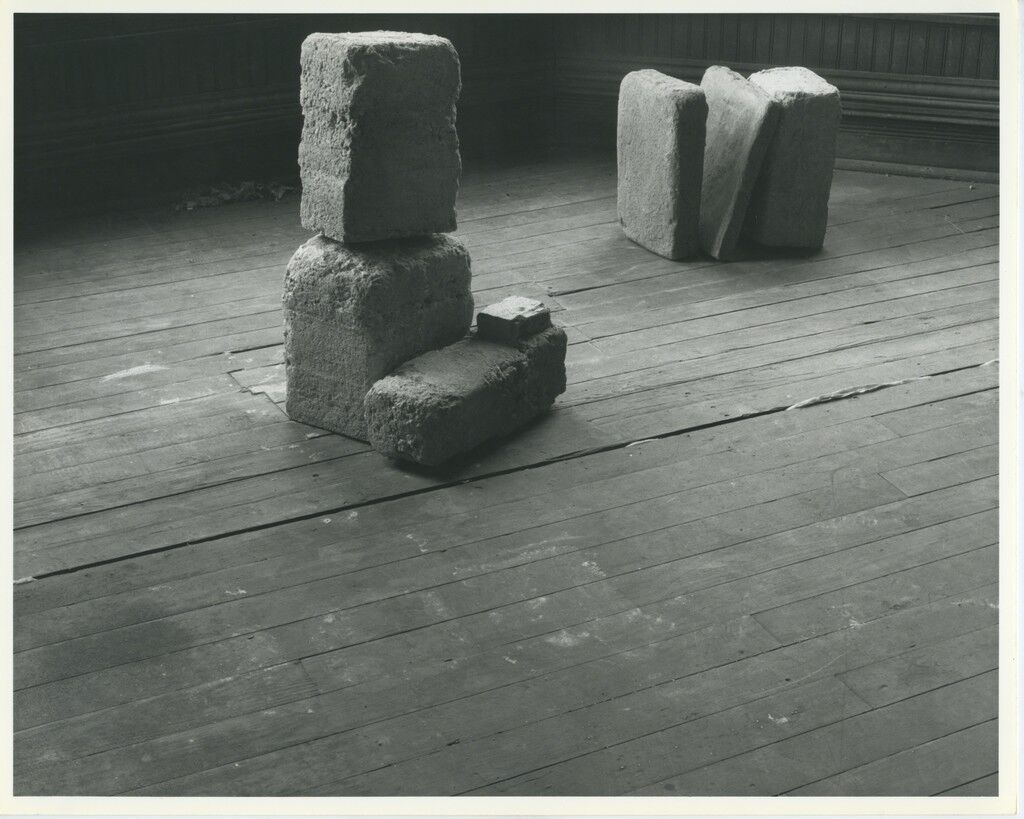 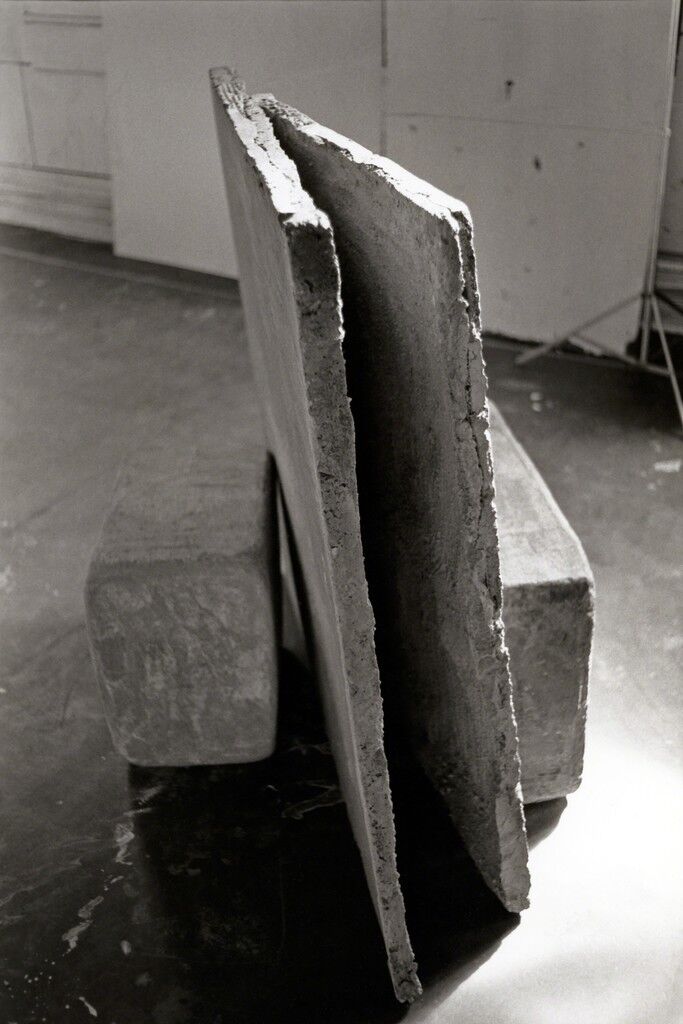 Beverly Buchanan
Wall Fragments, 1978
"Beverly Buchanan – Ruins and Rituals" at Brooklyn Museum, Brooklyn
The themes of past and present, suppression and resistance, surface more subtly in Buchanan’s earliest pieces, which fill the first room of “Ruins and Rituals.” They consist of paintings of black walls and humble concrete sculptures that resemble fragments of forgotten or demolished buildings. The latter, which she called “Frustulas,” are craggy, pocked, and in some cases covered in moss. They were inspired by the decrepit cityscape that surrounded her while she studied and later worked as a public health official in New York and New Jersey in the 1970s, and they are captivating, in the way a ruin happened upon unexpectedly during a walk in the woods might be.
But the most enthralling works on view are wall-scale video projections documenting the outdoor sites where Buchanan installed four concrete earthworks after moving back to Georgia in 1977. There, set in the South and haunted by the history of slavery, Buchanan’s sculptures are powerfully charged. “She really created these almost tombstone-like forms in response to sites that were the subject of historical whitewashing,” explained Burris as our small group was engulfed by a projection showing a concrete form, rooted in the ground and surrounded by waving reeds.
The piece we were looking at is Marsh Ruins (1981), located in coastal Georgia near a commemorated site where Confederate poet Sidney Lanier penned his famous work ‘‘Marshes of Glynn’’(1878). To the east of Buchanan’s work, as a wall label points out, is Saint Simons Island, where a group of Igbo people sold into slavery collectively drowned themselves in 1803. That site, unlike Lanier’s, has no historic marker. In her way, Buchanan made her own.
Even her most personal works bore witness to the people and sites she came to know through her travels, a fact that Burris and McArthur make clear in the central room of the exhibition, where works from the artist’s personal collection join an enthralling array of ephemera, including the artist’s notebooks, snapshots, artist statements, and a parade of business cards. (One of them reads: “beverly buchanan: working artist, good cook, safe driver, datura queen,” datura being a reference to her green thumb and love of flowers). And her exhaustive collection of self-portraits, doodled in bright colors or taken selfie-style with a Polaroid, served as a means of contact with her community—she would send them as postcards to friends. 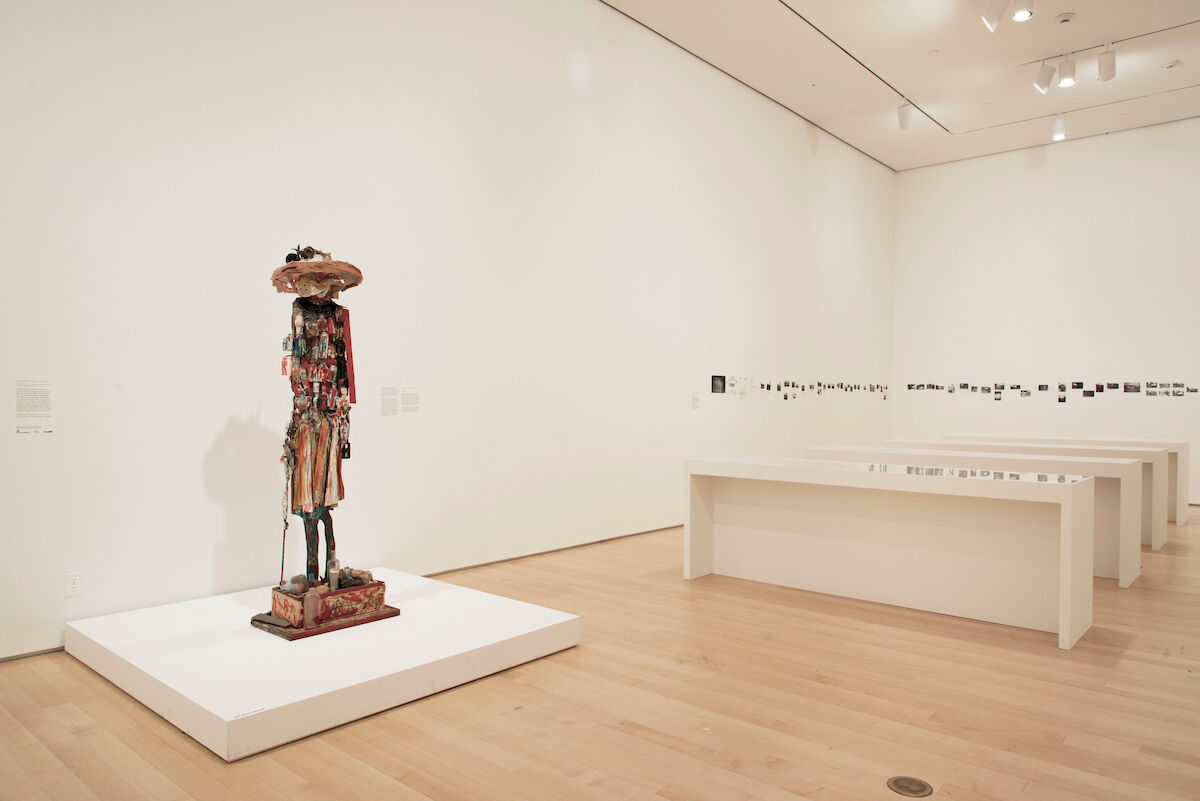 But perhaps Buchanan’s most striking and significant self-portrait is her sculpture Medicine Woman / Evelyn / The Doctor (1992), a spindly figure assembled from the artist’s own pill bottles, fragments of wood, and glittery bits of fabric. It stands tall, part human, part shack, and part talisman, referring at once to Buchanan’s femininity and her Southern roots, and manifesting, as the wall text notes, “an imagined healer for Buchanan, who experienced chronic illness for much of her life.”
She worked on the piece for almost a year and lived with it in her home, in Athens, Georgia, for nearly a decade. When she moved to Ann Arbor, Michigan, to be with a friend in the the latter years of her life, Medicine Woman stayed behind, perhaps as a surrogate—a relic of Buchanan’s deep relationship with her home, and the relationships and work she forged there.
Alexxa Gotthardt
Related Stories