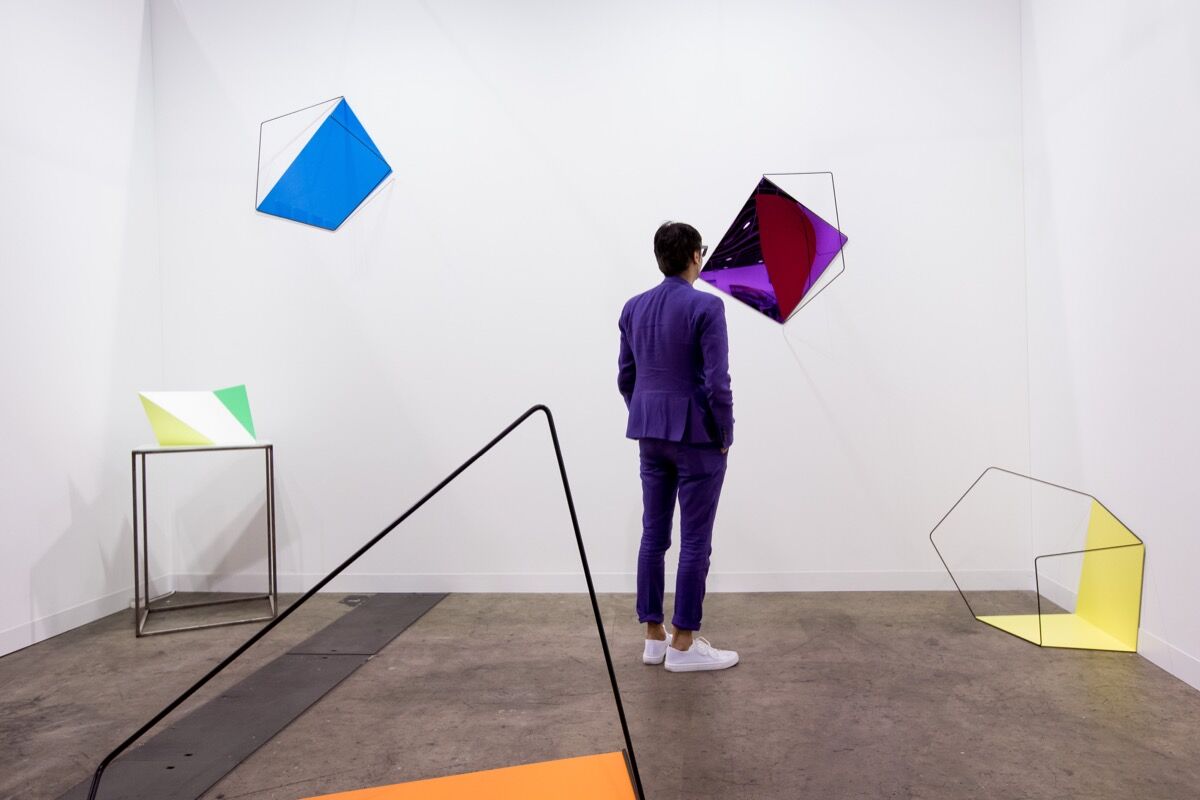 The fifth edition of Art Basel in Hong Kong opened to VIPs today with 242 galleries from 34 countries participating in 2017, up slightly from 239 galleries last year. The art world has placed ever-increasing focus on Asia over the past half-decade, with a flood of new collectors from China and Southeast Asia entering the market. At Art Basel in Hong Kong’s opening day, a sense pervades that the pivot of the industry’s attention to the region is now complete—and that this fair now stands on equal footing with its sisters in Basel and Miami Beach.
“This is a milestone year for the fair,” said Art Basel Global Director Marc Spiegler, reflecting on the five years since his fair purchased Hong Kong art fair ART HK, which was five years old at the time. Many galleries have moved to or expanded in the city in the time since, and the fair itself has increased in visitorship from just 20,000 attendees in 2008 to 70,000 in 2016. This year a similarly sized crowd is expected.
“I don’t think any of us imagined the show would gain so much attention so quickly,” said Spiegler. At least according to early results, that attention is ever more quickly turning into sales.
Among the headlining early transactions at the fair, David Zwirner placed two paintings by
Luc Tuymans
for $1.5 million apiece in the fair’s first hour. Hauser & Wirth also reported several sales in the seven figures, including a large-scale
Mark Bradford
painting that sold in the fair’s first hours, a 1964
Philip Guston
painting, and a 1982
Frank Auerbach
painting, Head of J.Y.M. 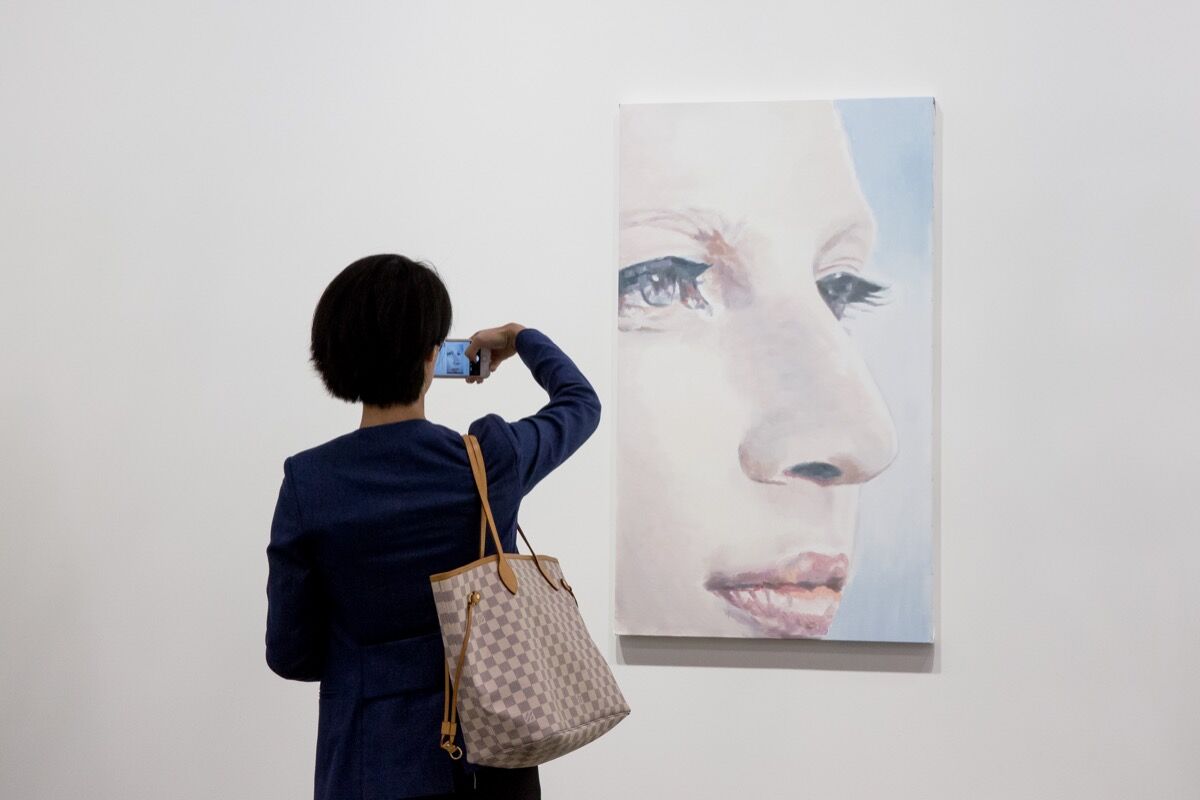 Six-figure sales were relatively more abundant, with White Cube selling a work by
Theaster Gates
for $700,000 and a work by
Georg Baselitz
for €575,000; Galerie Gmurzynska selling, among other pieces, a
Fernando Botero
work for $600,000; and Galerie Thaddaeus Ropac selling a
Tony Cragg
sculpture for €650,000.
Pace reported strong early sales of works by
Qiu Xiaofei
on the range of $50,000–$150,000 as well as a piece by new artist to the gallery
Loie Hollowell
for $25,000. Gallery president Marc Glimcher quipped that collectors may have had “pent-up energy” after many skipped Art Basel in Miami Beach this past December, absences which he said were due to “the Zika virus more than anything else.” Glimcher said the “international magnetism” of Hong Kong for the art world has risen precipitously over recent years, as has the city’s local art scene.
“There is a lot of energy,” he said. “Every art dealer in the world feels like they need to be here.”
For Pace, that has meant undertaking a significant expansion in Asia over the next year. In Hong Kong, the gallery will soon open a second space in the city at the still-under-construction H Queens building, a 24-story lifestyle center, which has committed as many as half of those floors to galleries. The new space will join Pace Beijing, which opened in 2008, and Pace Seoul, which opened just two weeks ago.
Glimcher said some have been skeptical about the timing of his big bet on Asia: “People were asking me, ‘Why are you doing this in the middle of a global economic crisis?’ And I said, ‘There’s a global economic crisis? I have to watch the news more often.’” He said that crises do abound at present—not least in South Korea, where ousted president Park Geun-hye was being questioned by prosecutors regarding an expansive corruption scandal just as Art Basel in Hong Kong opened—but that difficult times also produce great art.
“That drives the market more so than the economy itself,” he said. Advertisement
Also key to remember in Asia is what’s at most a dotted line between its real economy and the globalized, diversified fortunes of those opening private museums—and buying artwork at Art Basel in Hong Kong.
Many of those at Art Basel in Hong Kong’s opening day began to buy art in the mere five years since the fair began, with major Hong Kong-based collector and patron Adrian Cheng explaining that a growing collector base was inevitable based on the country’s demographics. “When you build an ecosystem, new collectors will emerge,” he said.
“Thirty percent of the population in China are millennials and that probably accounts for 50% of retail sales, sales growth, and GDP.” Cheng said this young generation is more international and has had much greater exposure to art than its forebears.
On Monday, Cheng’s K11 Art Foundation debuted “.com/.cn,” an exhibition presented in collaboration with MoMA PS1 at a pop-up space in Hong Kong’s Cosco Tower. PS1’s director Klaus Biesenbach (a key adviser to a number of private museums here, including Linyao Kiki Liu’s Si Shang Art Museum in Beijing) and chief curator Peter Eleey co-curated the show, which includes work by Chinese artists such as
Li Ming
,
Miao Ying
, and
Cao Fei
as well as artists from the West like
Sondra Perry
,
Aleksandra Domanović
, and
Anicka Yi
.
“.com/.cn” continues an effort by Cheng to increase dialogue between the art world in China and in the West, for which he has also established strategic partnerships with PS1 and New York’s New Museum. Raising Chinese artists’ profiles internationally also helps establish a greater appreciation and audience for contemporary Chinese art in Mainland China, he said.
“Our main motive is to create contemporary Chinese culture, a sense of identity, and also to make the world understand what the new generation of Chinese culture is,” said Cheng.
No stranger to that new generation of Chinese culture and the collectors at its forefront is Brett Gorvy. This Art Basel in Hong Kong is, however, the first for the former president of Christie’s, as part of the newly created Lévy Gorvy. Gorvy was central to the auction house’s success in developing the collectors in China and Asia at large who routinely bid well into the eight figures and sometimes into the nine figures for artworks. In his partnership with Dominique Lévy, Asia became a key area of focus for growth.
“What I saw at Christie’s was collectors coming in at one level and accelerating very quickly to buying pictures for $150 million or $180 million,” Gorvy said on Tuesday. 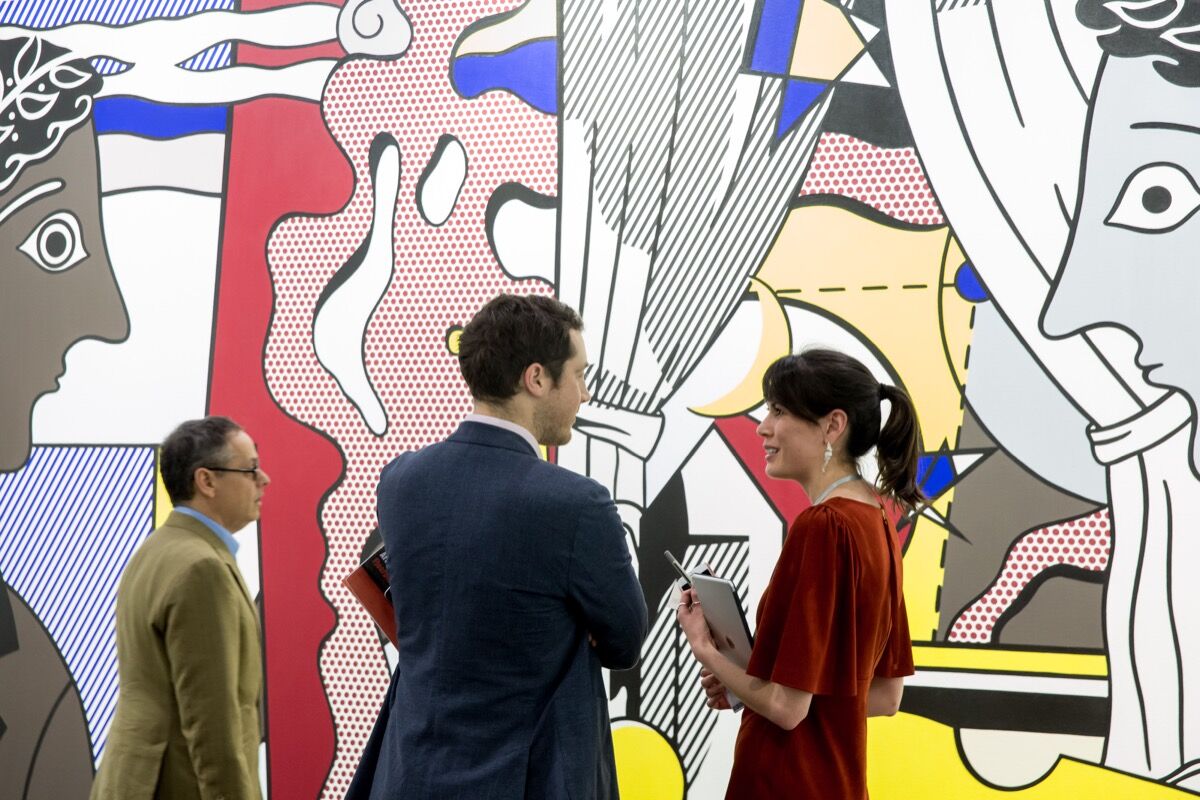 At the fair, Lévy Gorvy has provided an entry point with
Gerhard Richter
’s 25 Farben (25 Colours) (2007) for the relatively modest sum of $575,000. But prices at the booth quickly escalate to $18 million for
Roy Lichtenstein
’s Cosmology (1978), which was acquired directly from the artist and has remained in the same collection since. Gorvy said that even $18 million is an entry point, at least for some, in Asia.
“There is an incredible amount of liquidity and wealth here,” he said.
Gorvy said that sales here nonetheless tend to take several days at this upper limit of price at Art Basel in Hong Kong, something they’ve respected by instituting a strict policy against presales and also reserves. He said he finds the practice “frustrating” as a collector and “unfair when you’re trying to attract a new audience.”
Regardless of final results, however, don’t expect to see Lévy Gorvy put up a permanent sign in Hong Kong any time soon. Gorvy said he’s keen to pursue a similar strategy to the one he pioneered late in his tenure at Christie’s with “The Loaded Brush,” a show that traveled through Asia and took the place of the house’s major cross-category, record-busting sale last fall.
“We have to take art to areas where we have interest but there is also the possibility of building on that interest,” he said. “It’s ultimately about creating curated groups of art that we can bring to collectors.” First up, the gallery’s recent New York show of
Willem de Kooning
and
Zao Wou-Ki
will travel to Hong Kong later this year.
Twenty-nine new galleries join Art Basel in Hong Kong for the first time this year, 10 each from Asia and Europe and nine from the Americas. They include Shanghai’s Bank, Mumbai’s Jhaveri Contemporary, New York and London’s Luxembourg & Dayan, Mexico City’s kurimanzutto, London’s Project Native Informant, and Berlin’s KÖNIG GALERIE. Johann König said he visited the fair for the first time last year and based on that initial impression and heavy interest in the region for his artists
Alicja Kwade
and
Tatiana Trouvé
, he decided that it was time to take the plunge. 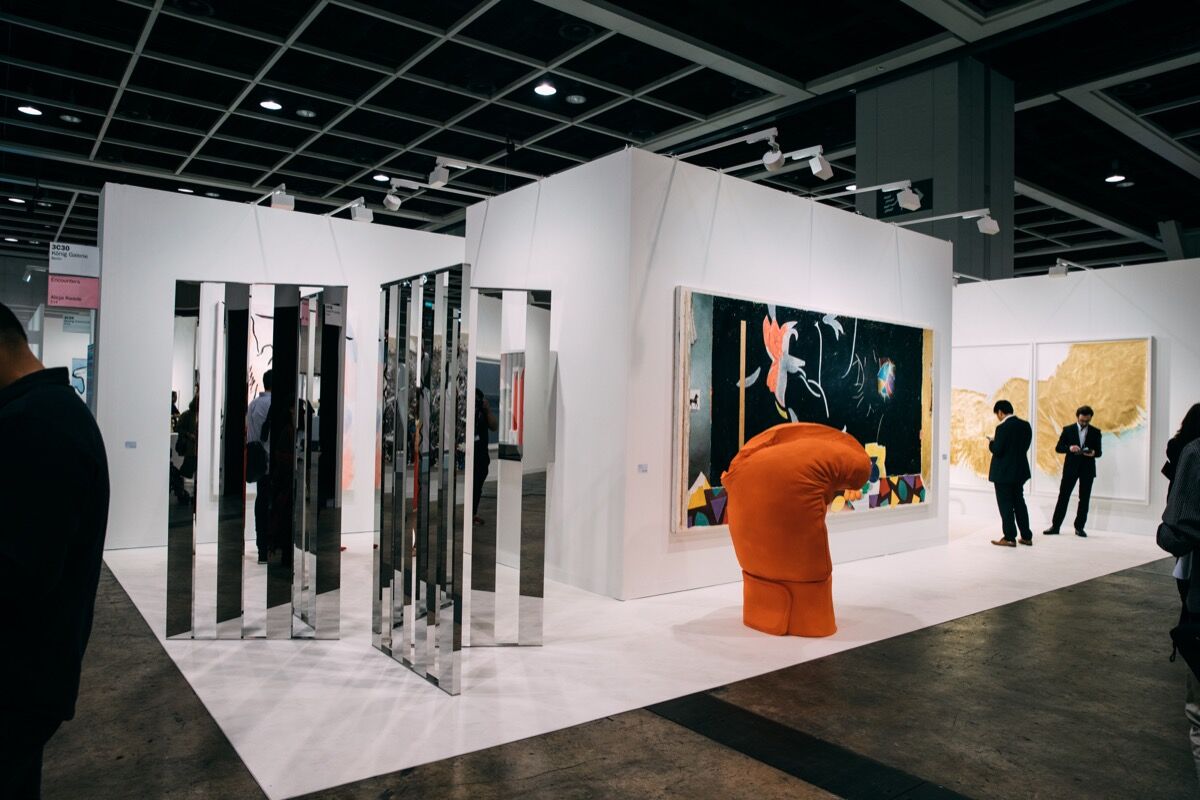 König’s booth features some of the larger works on offer by young artists at the fair; it bucks an overall trend at the fair to show smaller, more domestic-scale pieces—a strategy that was paying off early on.
Jorinde Voigt
’s large-scale triptych Cavallini-Algorithmus (2015) sold in the first few hours for €155,000, along with two other works not on the stand for €64,000 apiece. Two Alicja Kwade sculptures sold for €65,000 and €45,000, and two works by
Matthias Weischer
sold for €80,000 and €30,000. König is also showing a mirrored
Jeppe Hein
sculpture, similar to one in the collection of Shanghai’s Long Museum.
“Everybody kept telling us that business usually takes time here, that it’s hard to get a foot in the door, but we don’t seem to have that problem,” he said.
While the art world here has now evolved to the point at which dealers like König can routinely introduce new artists, Kukje gallery founder Hyun-Sook Lee said that Art Basel in Hong Kong has helped to rapidly improve the quality of art on display in the region—and helped inspire new individuals to collect. Lee, who herself has played a principal role in the growth of the art market in Korea, said that the fair has gone far in placing the Asian art world on equal footing with the markets in Europe and the United States. 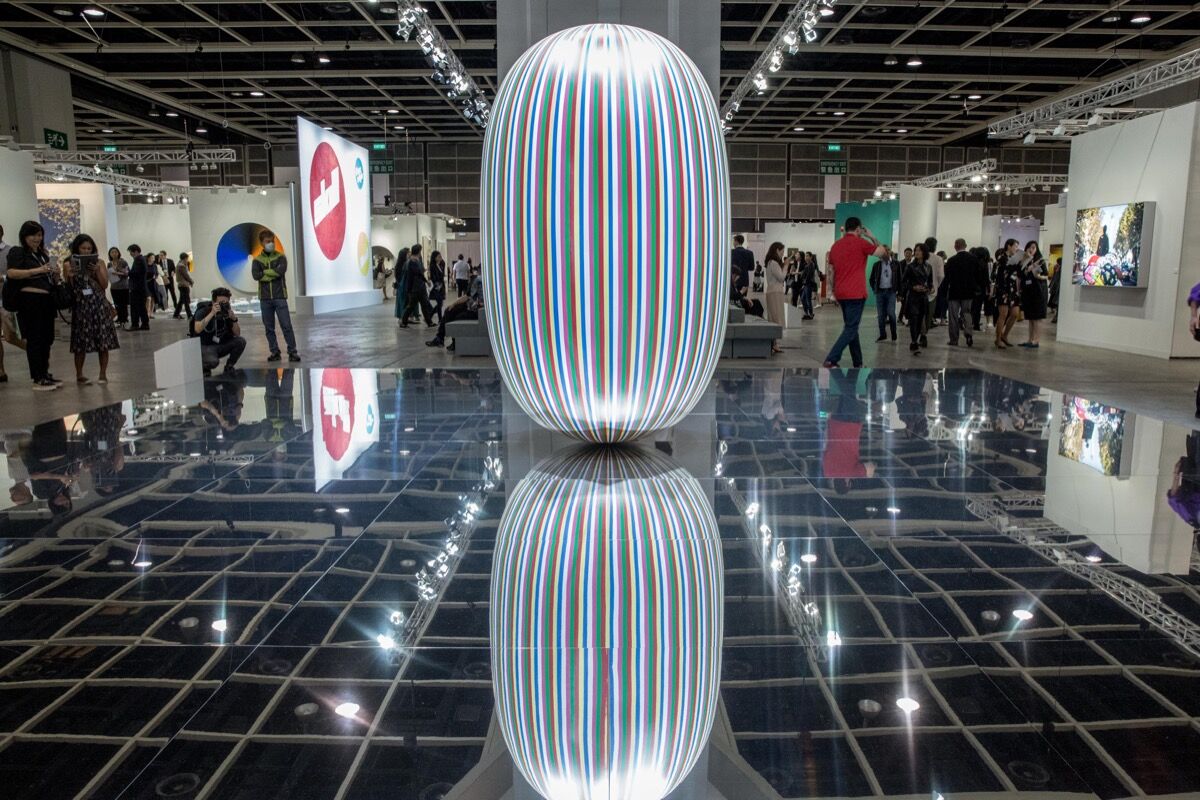 Kukje Gallery is showing with Tina Kim Gallery in one of 19 presentations in the inaugural edition of the Kabinett sector at Art Basel in Hong Kong, a transplant from Art Basel’s Miami show that allows galleries additional space for a curated presentation. Lee placed the focus of her gallery’s Kabinett presentation on the late
Dansaekhwa
artist
Kwon Young-Woo
.
Three works from the presentation, which spans the artist’s works from 1978 to 1989, sold on opening day for between $70,000 and $275,000, joining further sales in the two galleries’ presentation in the Galleries sector including
Lee Ufan
’s Dialogue (2017) for $250,000–300,000,
Ugo Rondinone
’s dritterjanuarzweitausendundsiebzehn (2017) for $100,000–150,000, and three works by
Kim Yong-Ik
, who studied under Dansaekhwa artist
Park Seo-Bo
, for $30,000–230,000.
Dansaekhwa, or Korean minimalism, has seen a fervent increase in market attention over the past two years, something that Kukje has played a key role in pushing forward. “It was really too late for these artists to be discovered,” said Lee. Even in their home country, she said, artists like Kwon Young-Woo were relatively unknown.
“Before Dansaekhwa boomed, even Korean people didn’t put much value on these artists. They were mostly interested in Korean
Impressionist
artists,” she said. “But the artists kept the work, so we had all the best material to promote it on the global stage.”
The galleries also present a large installation (Deductive Object, 2016) by Korean artist
Kimsooja
as part of the fair’s Encounters section for large-scale artworks—Art Basel in Hong Kong’s answer to the Basel fair’s Unlimited. But while the colorful steel orb was drawing significant attention from viewers, another work in the section,
Shen Shaomin
’s Summit (2009–2010) perhaps most poignantly pointed at the Hong Kong fair’s growth and that of the economies that surround it.
The installation sees the most prominent communist leaders in history “meeting” in a circle, all in glass coffins save Fidel Castro, who remains on his deathbed and asks whether these leaders’ ideas remain relevant to our present. One wonders what Chairman Mao would have to say if he were to open his eyes.
Alexander Forbes is Artsy’s Consumer Marketplace Strategist. He was previously the Executive Editor of Artsy Editorial.
Related Stories