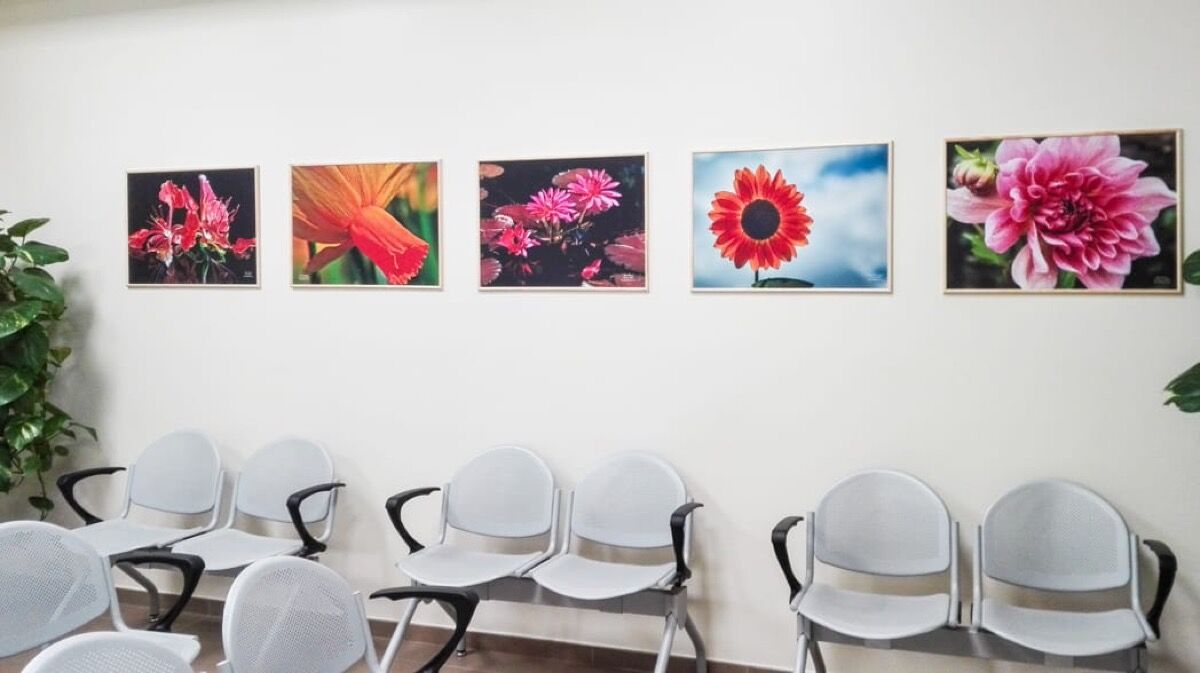 Photos by Dolores Kiriacon, Justin Rodrique, Elaine Poggi, Reynaldo Brigantty, and Maye Schwartz at the Breast Health Center in Florence, Italy. Courtesy of the Foundation for Photo/Art in Hospitals.

Hospital patients expect that the medicine doctors give them will improve their health. But it’s possible that the nondescript painting of a country house, or an idyllic landscape hanging on a nearby wall, may also be part of the prescription.
When it comes to what style of art should be shown in hospitals, psychologists have suggested that figurative works are more beneficial to patients than abstract ones. But recently, this preference for figurative art in hospitals was challenged by researcher Stine Maria Louring Nielsen and professor Michael Finbarr Mullins of Aalborg University in Denmark. Their research found that, despite what has previously been thought, abstract art also has positive effects on wellbeing, and inspires meaningful personal contemplation.
Figurative art has been favored in hospitals in the past due to several psychological theories suggesting that patients should be thinking about anything other than being in a hospital. Distraction, for example, is believed to limit one’s experience of pain. Humans are also known to exhibit “biophilia,” an innate disposition for natural images, which are on short supply in a clinical hospital space. Additionally, a theory known as “emotional congruence” suggests that hospitalized individuals will interpret and react to art through a lens of stress or anxiety, unless guided by a positive image.
So, it makes sense why a person curating the art for a hospital might opt for a bright, figurative work of the countryside, for example. The image serves as a distraction from the hospital setting and reminds patients they are connected to an outside world. And it is a picture that can’t easily be interpreted negatively through the understandably gloomy disposition of an ill or injured individual. Previous research has contended that abstract art is much more open-ended and, in a bleak scenario, could lead to negative thoughts.
Nielsen’s findings suggest that the reality is more complicated. An anthropologist, Nielsen wanted to apply more ethnographic methods to explore “what actually happens” in hospitals, as she put it. To that end, she conducted her research in hospitals rather than a lab, speaking with patients to get a sense of how they perceive the presence of art around them.
In one case study, conducted in 2015, Nielsen began by asking roughly 100 patients to rank 20 artworks of differing styles, which were predominantly figurative. The four most-liked works and the one least-liked work were borrowed from a museum and hung in five separate hospital “dayrooms” (a communal recreational space) in different wards.
Nielsen and her team first interviewed patients about their feelings about the dayrooms while no art was on the walls, and then again when one of the works was put on view. She asked patients how they felt about the rooms, what they do there, who they speak with, and other similar questions. The study found that the artwork impacted how people experienced the room. If the work was bright, for example, people had more positive feelings about the space, Nielsen said. 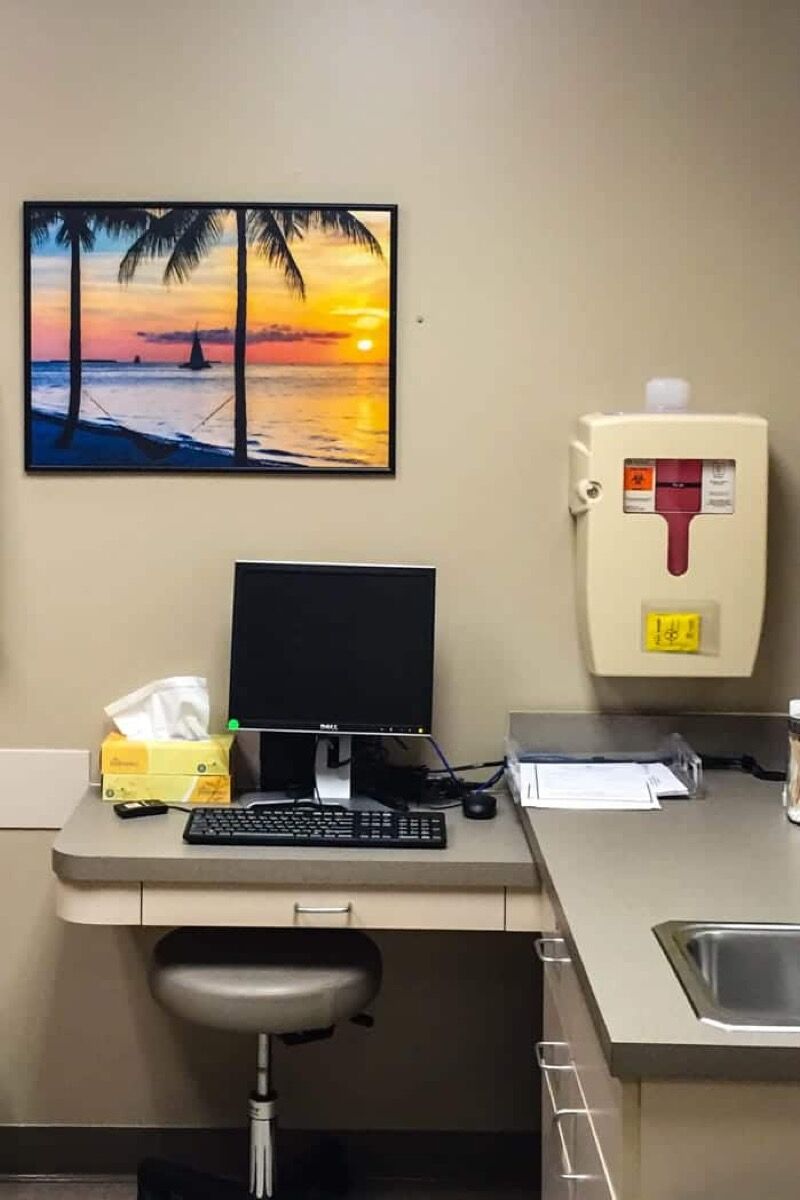 Photo by Cynthia Peters in at the Douglas Clinic in Tyler, TX. Courtesy of the Foundation for Photo/Art in Hospitals. 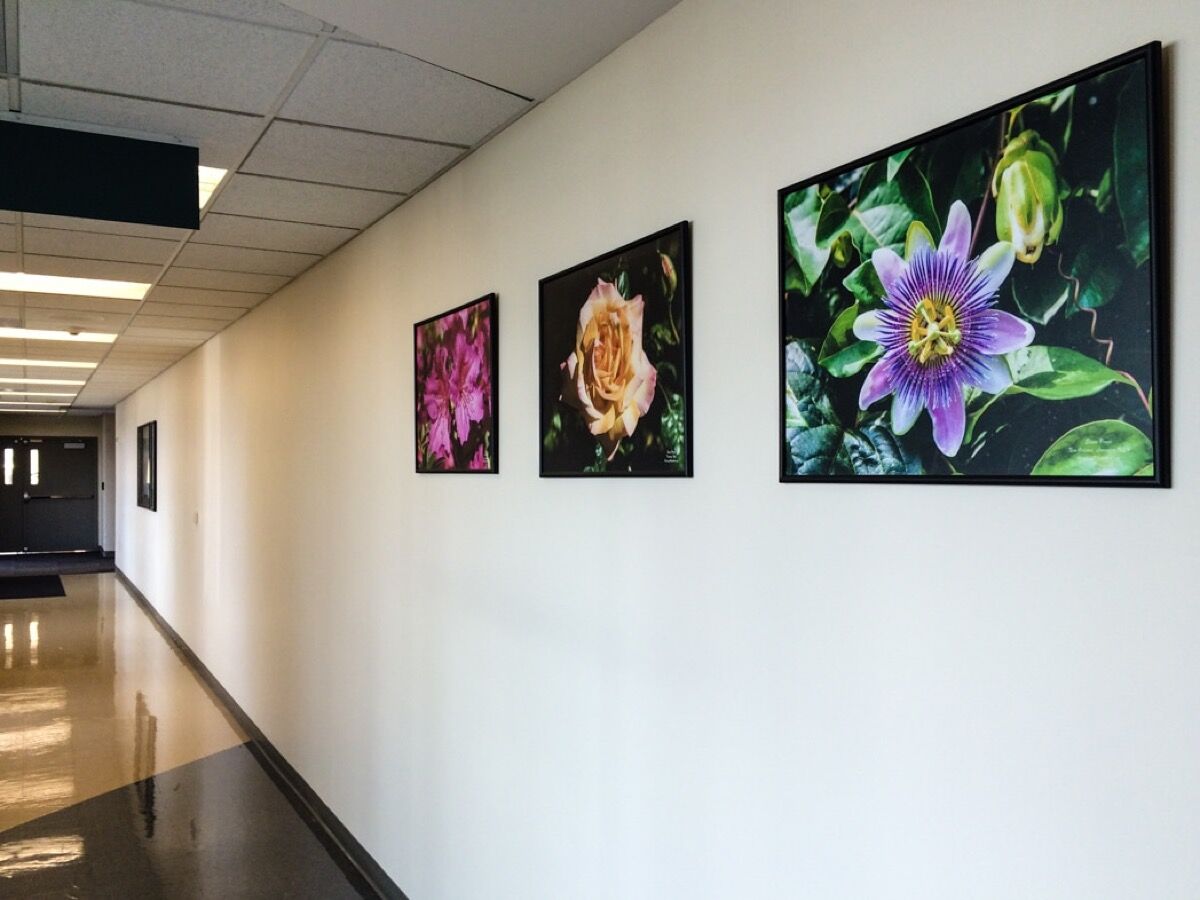 Photos by Elaine Poggi at the Hannibal Regional Hospital in Missouri. Courtesy of the Foundation for Photo/Art in Hospitals.

The researchers wanted to see how these findings related to whether the work was abstract or figurative. In a second case study, Nielsen took poster reproductions of 10 works of art—by artists including
Mark Rothko
,
Josef Albers
,
Kazimir Severinovich Malevich
—and put them in patients’ rooms. She also covered up the names of the artists.
Over the course of around a month, she spoke with 68 patients, asking them general questions about the space and if they liked it. The case study revealed that abstract paintings can inspire positive thinking about a hospital space and emotional contemplation on a personal level in ways that are slightly different than the effects of figurative works. Overall, however, patients had positive reactions to the artworks, regardless of the style.
“Art and well-being was not significantly related to the artwork being figurative or abstract,” wrote Nielsen and Mullins in their paper on the study. “The notion that the ambiguity of abstract art generally leads to stressful effects was thus called into question by these findings.”
Patients enjoyed having art in their rooms and were all compelled to discuss it with Nielsen, without being prompted. Many patients reported that the abstract works provided something to focus on that inspired deeper self-contemplation and that it relaxed them on an existential level. It also provided a subject of conversation with others, beyond their illness.
This is significant because, as Nielsen pointed out, individual identities are neutralized in a hospital. Everyone is given the same clothes, and individuals are spoken about in terms of their symptoms or treatment. The art, both abstract and figurative, seemed to counteract this by prompting thinking beyond patients’ immediate state. According to Nielsen, patients also noted that the mere presence of the works inspired confidence that the hospital was well cared-for, leading them to expect a high level of care while staying there.
Of the 10 works, only one was figurative (a
Claude Monet
wheat field). The case study revealed that the figurative painting did bring the benefits psychologists would expect. Patients experienced positive thoughts and feelings after viewing the figurative image. One patient was reminded of a summer house. But “it also stopped there in a way,” said Nielsen. “The abstract art opened up several more layers.”
Even a
Jackson Pollock
with dark colors that Nielsen was wary of including in the study provoked contemplation; patients recounted how looking at it allowed them to collect their thoughts. A psychophysiological study conducted at Aalborg University Copenhagen provided some quantitative support to the qualitative findings. The researchers tracked eye movements and the heart rate of 30 subjects who were shown the 10 posters from the hospitals, as well as 40 other works on a screen. The results suggest that looking at abstract art was relaxing, though Nielsen noted that researchers didn’t look for a causal connection.
More research must be done on the connection between artwork and medical recovery in hospitals. But for now, if you are hospitalized, it’s better to be looking at a painting than a blank wall.
Isaac Kaplan is an Associate Editor at Artsy.
Related Stories