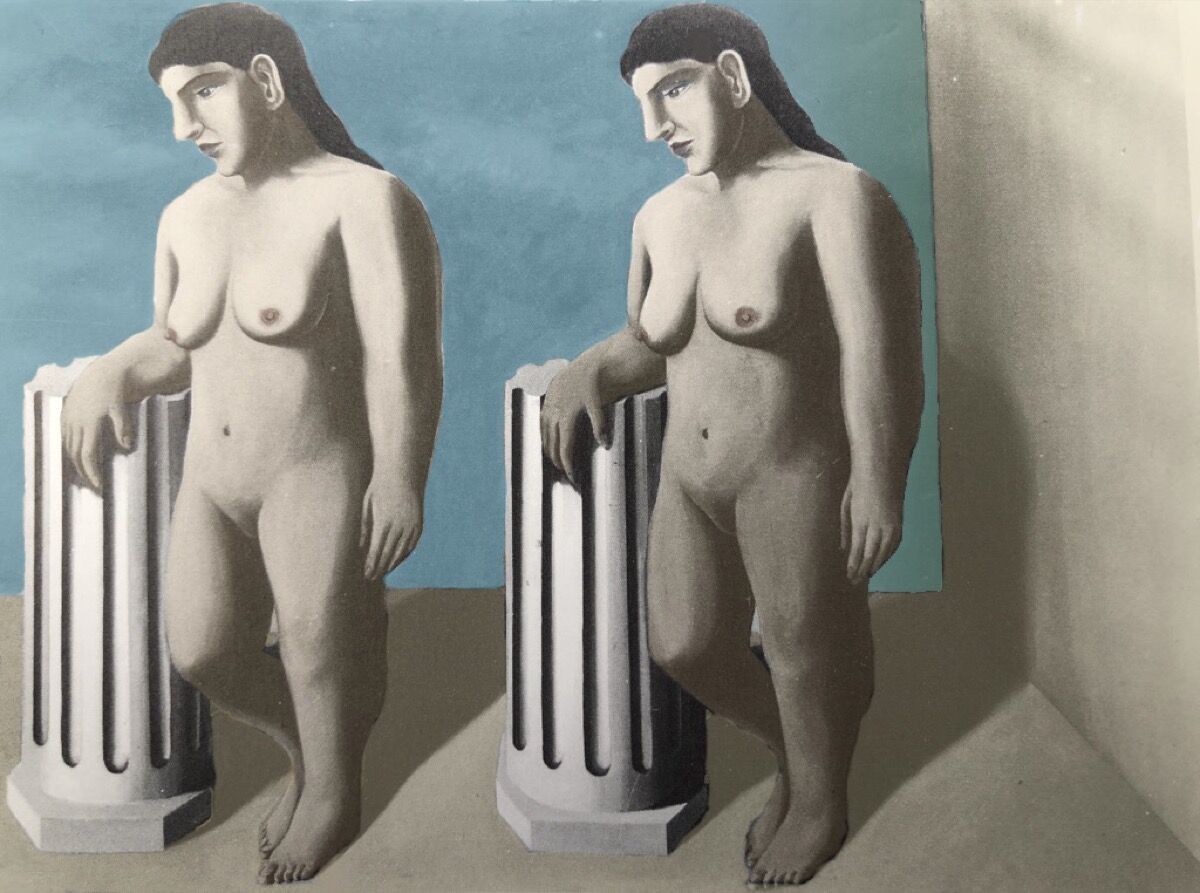 Eighty-five years after it went missing, a lost painting by
Surrealist
artist
René Magritte
has been found—in pieces, that is.
On Tuesday, the Royal Museums of Fine Arts of Belgium (RMFAB) announced that researchers have discovered the fourth and final section of Magritte’s 1927 work The Enchanted Pose. X-ray imaging revealed that the artist had painted over it to create a later work, God is not a Saint (1935–36), today owned by the Magritte Museum in Brussels.
Missing since 1932, The Enchanted Pose—which depicts two nude women leaning against broken pedestals—was pictured in the artist’s 1992 catalogue raisonné. The black-and-white photo of the painting is accompanied by an entry that reads: “Whereabouts unknown [...] probably destroyed.” A penny-pinching Magritte is suspected to have cut the work into four parts and painted over it in an effort to re-use canvas and save money. 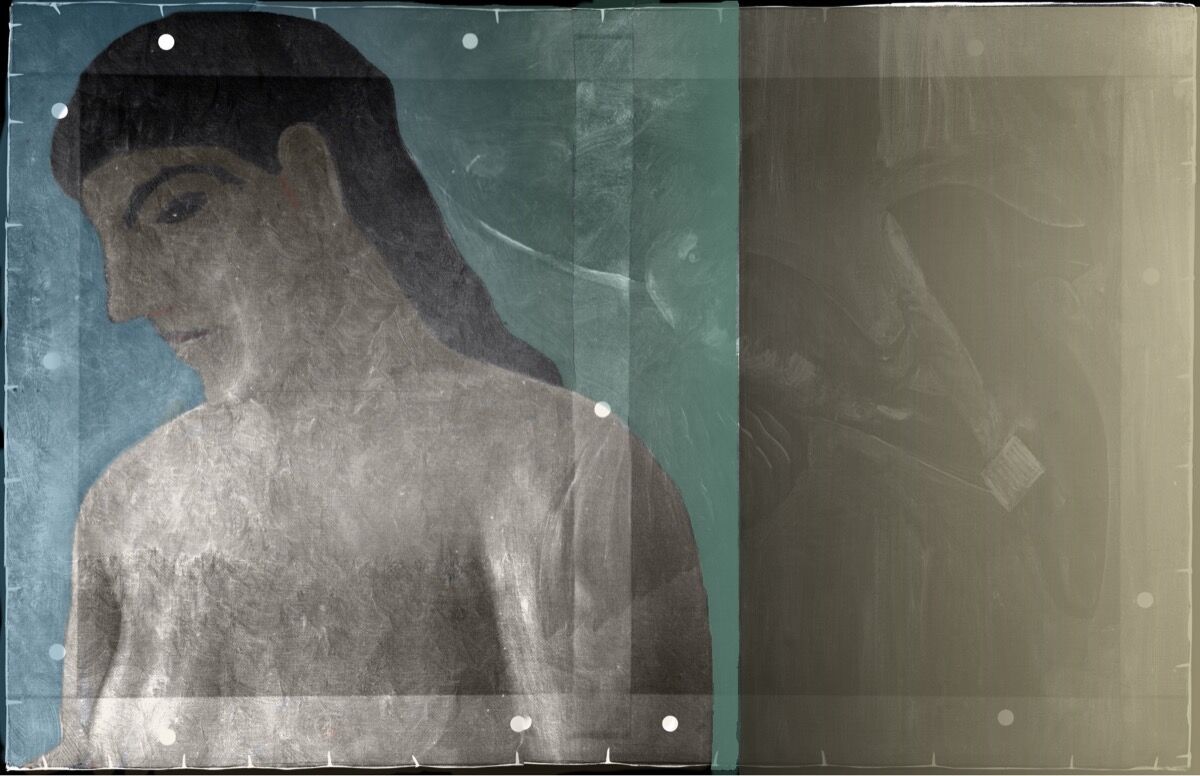 Courtesy of the University of Liége and Royal Museums of Fine Arts of Belgium.

This discovery marks the conclusion of a years-long search for the painting. The first piece was discovered in 2013, when Magritte’s The Portrait (1935) underwent conservation work at New York’s Museum of Modern Art. Conservators noticed the artwork’s edges were painted (atypical for Magritte) and decided to X-ray the painting, ultimately discovering the upper-left section of The Enchanted Pose underneath.
The same team later investigated Magritte’s The Red Model (1935), in the collection of Moderna Museet in Stockholm, and found another portion of the lost painting. Then, in 2016, conservator Alice Tavares da Silva discovered the lower-right quarter of The Enchanted Pose painted beneath La Condition humaine (1935), a work in the collection of the Norfolk Museums Service.
This latest discovery, which completes the art-historical jigsaw puzzle, was made under the auspices of “Magritte on practice,” a collaborative research project launched in 2016 by the Royal Museums of Fine Arts of Belgium and the European Centre of Archaeometry of the University of Liège. Described as a “systematic study” of the Magritte Museum’s collection, the project is deploying “a whole arsenal of non-invasive physicochemical analysis and scientific imaging” to probe the physical condition of the works. In the case of God is not a Saint, researchers employed an X-ray technique that revealed the upper right-hand corner of The Enchanted Pose beneath the visible layers of paint. 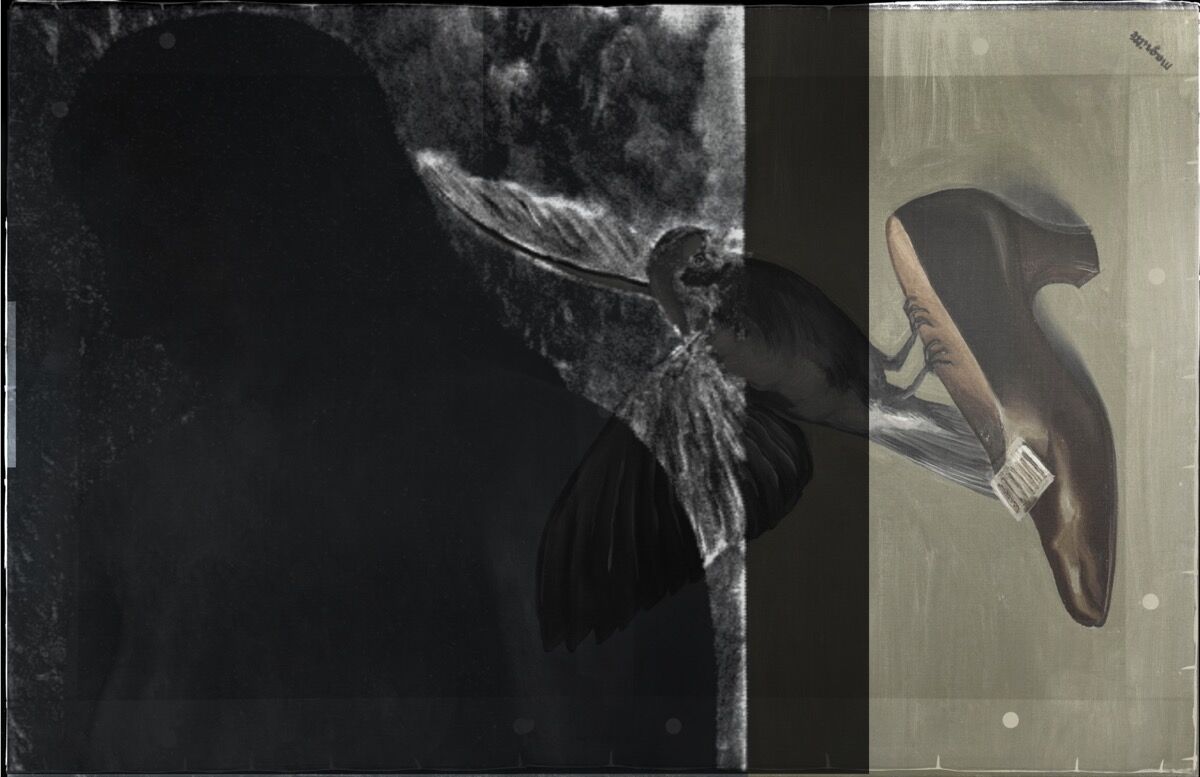 Courtesy of the University of Liége and Royal Museums of Fine Arts of Belgium. 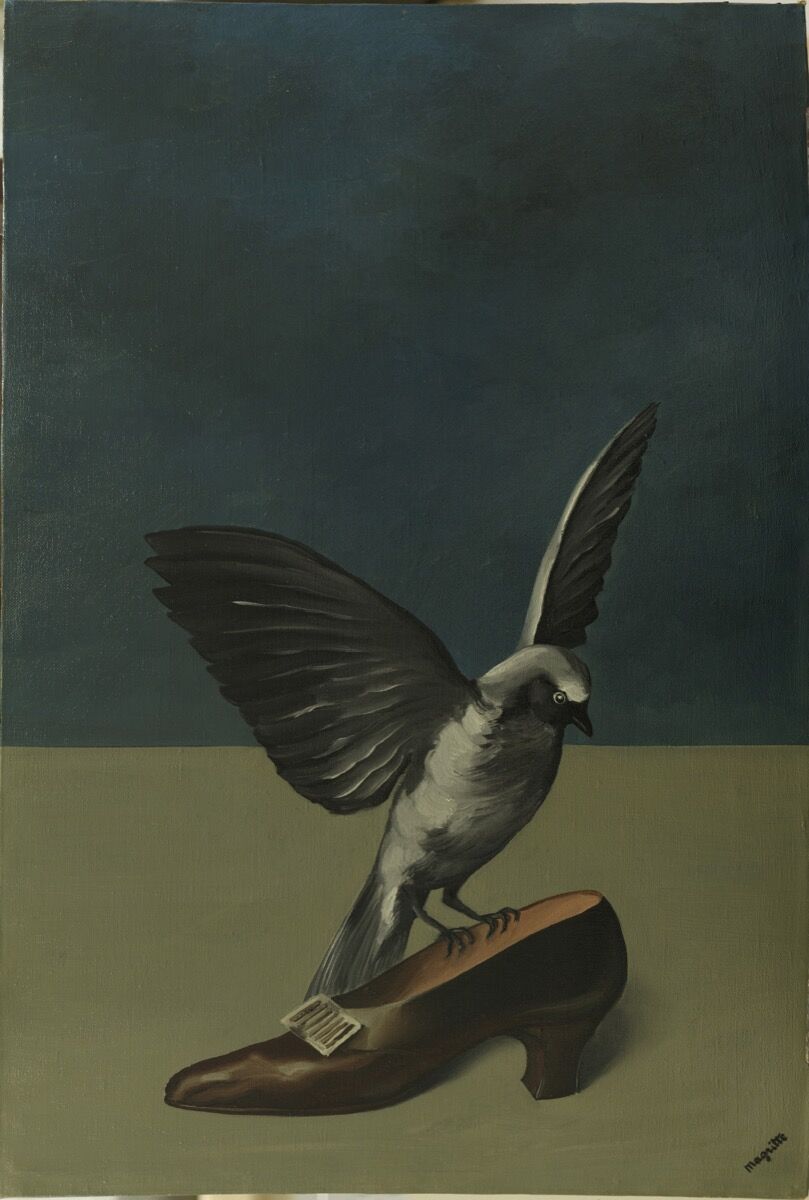 Advertisement
While all four fragments of The Enchanted Pose are now accounted for, the work can only be digitally reconstructed. Physically restoring the completely painted-over artwork “is absolutely impossible,” da Silva told Artsy last year. “You would end up destroying one or both.” And given that Magritte purposefully painted over The Enchanted Pose, it seems as though he never wanted it to hang on a museum wall, even if technology allowed it.
But that doesn’t mean there won’t be more discoveries in the future. “If we have the opportunity to continue this research, it is reasonable to expect that more of Magritte’s missing paintings will surface,” Francisca Vandepitte, a curator in the modern art department at the RMFAB, said in a statement.
This significant art-historical discovery came one day after a major market moment for the artist. Magritte’s L’empire des Lumières (1949) shattered the artist’s market record Monday night at Christie’s, selling for a whopping $20.5 million with fees.
The new owners might consider giving it an X-ray.
Isaac Kaplan is an Associate Editor at Artsy.
Related Stories