Bodys Isek Kingelez, Maker of Utopian Cities, Finally Gets the Retrospective He Deserves 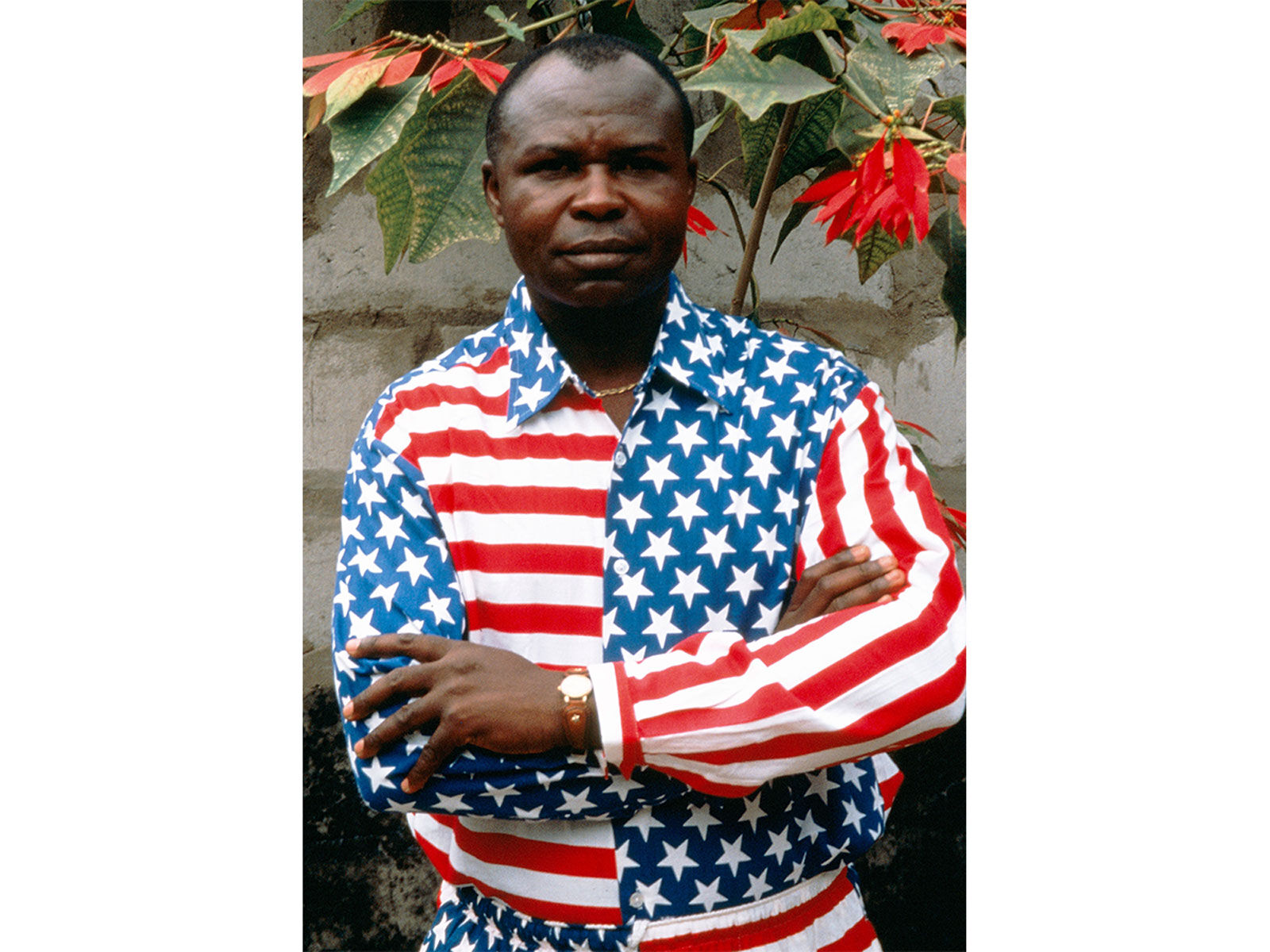 Tess Thackara
May 24, 2018 3:51pm
In the universe of the late Congolese artist
Bodys Isek Kingelez
, miniature cities take the form of an acid-induced mirage of a theme park from the year 2057. Over the course of his life, Kingelez dreamed up hundreds of model buildings and metropolises—what he called his “extreme maquettes”—realized in minute detail with cardboard, packaging, waste plastic, glue, and other found and bought materials.
Cream-colored
Art Deco
terraces rise into the sky like tiered birthday cakes; buildings resemble majestic boats or a rare breed of decorated moth; towering skyscrapers are ensconced in sumptuous folds. Everything is splashed in the colors of the rainbow. This small-scale architecture is fabulous but orderly—the stuff of fantasy, but also an expression of the real world: of political ambitions, of a desire for harmony, of a vision for civic responsibility and a new postcolonial world order.
Since receiving his first major art world début in the 1989 exhibition “Magiciens de la Terre” in Paris, Kingelez has become a familiar name and a favorite of the mega-collector Jean Pigozzi, who, with curator André Magnin, began growing the world’s largest cache of
contemporary African art
after seeing “Magiciens.” Okwui Enwezor, curator of the 56th Venice Biennale, has also helped give the artist a stage. Despite this support, Kingelez—who died in 2015—has remained an enigmatic figure, and writing on his work has been relatively scant. 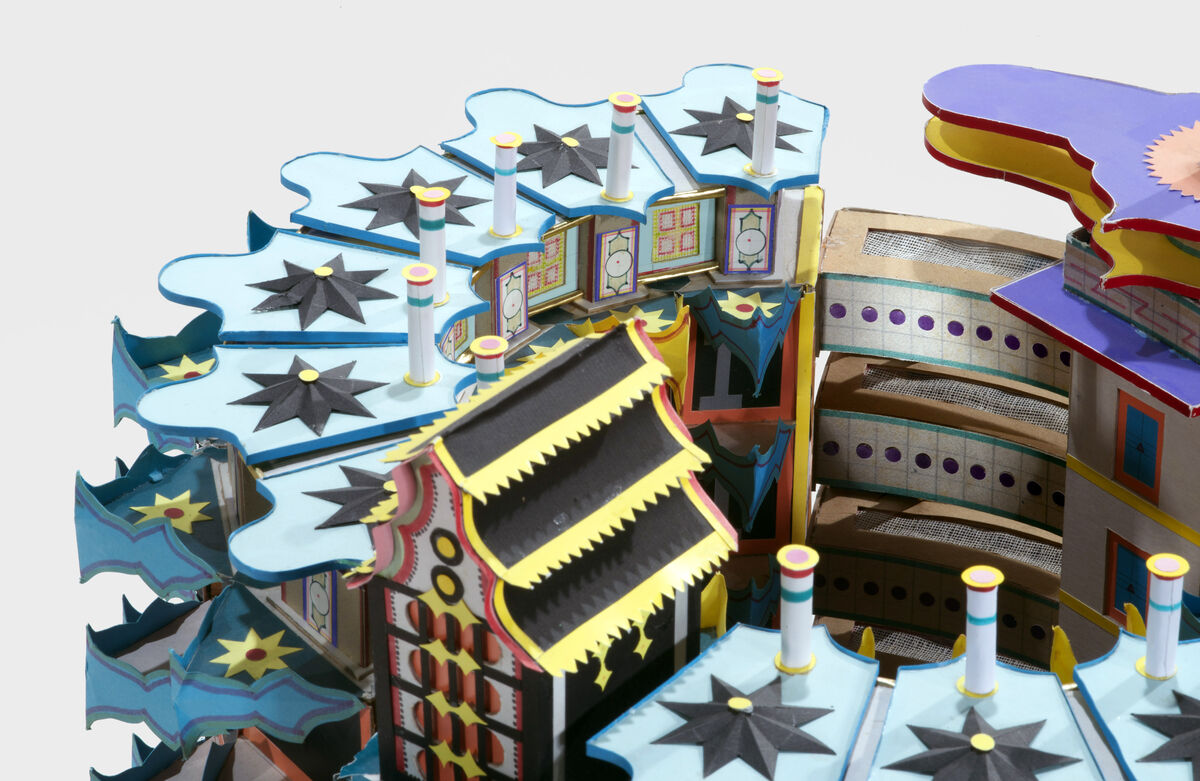 Advertisement
Now, Kingelez is receiving a retrospective at New York’s Museum of Modern Art, curated by the institution’s Sarah Suzuki. It is, remarkably, the first solo retrospective the institution has ever organized for a black African artist. (Yes, you read that correctly.) Spread across one large gallery, a few dozen of Kingelez’s imaginary “cities of peace,” as he called them, are installed on platforms of various heights; some of them rotate, providing a 360-degree view of the works’ contours. The maquettes range from elaborate skylines the size of a child’s giant train set to individual structures that resemble futuristic dollhouses.
The glittering Kimbembele Ihunga (1994), which takes the name of Kingelez’s hometown, has skyscrapers with shiny gold borders; a “Kingelez Stadium”; a building that fans out like a concertina; and bridges and steps that seem to float. “This town represents the shape of my imagination,” a wall text quotes him as saying. “It is the very image of my ability to create a new world.” These fantastical structures are arranged around broad avenues with colorful patterns. Kingelez’s optimistic palette even extends to maquettes that have more sober functions. His nearby Scientific Center of Hospitalisation the SIDA (1991), the artist’s vision for a cutting-edge medical center—created at the height of the AIDS crisis in the Democratic Republic of the Congo (DRC)—features shades of deep cerulean, sherbert pink, and decorative stars. 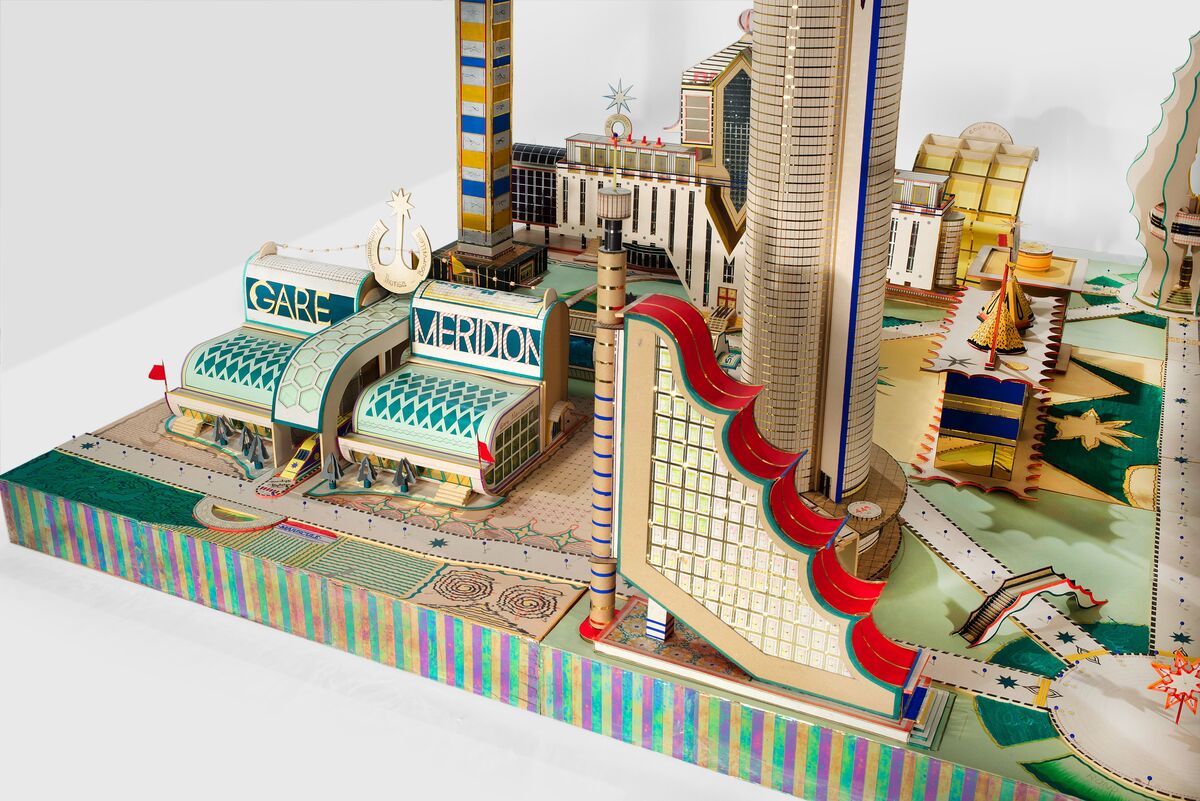 The exhibition comes with a custom virtual-reality experience that lets visitors wander through a Kingelezian cityscape at a blown-up scale—specifically his 8-foot-wide Ville Fantôme (1996), a sprawling vision for a city with no police force or military; “a peaceful city where everybody is free” and “a melting pot of all races in the world,” as the artist had described it. This VR component was developed with the help of German artist
Carsten Höller
, a maker of unhinged, funhouse artworks who is also a regular visitor to the DRC, and has previously curated Kingelez’s work. (Höller has also developed a Spotify playlist of Congolese music to accompany the exhibition.)
Due to Kingelez’s “lack of known art historical precedents,” Suzuki writes in the catalogue, “[the work] evades the genealogy that we love to document and trace.” While there are no artists known to have made anything quite like Kingelez did, however, there is also no shortage of associations with the visual culture of Kinshasa, the capital of what is now the DRC. “I draw my ideas from Africa,” Kingelez once said. And as indicated in catalogue texts by Suzuki, British-Ghanaian architect
David Adjaye
, and Chika Okeke-Agulu, a Nigerian artist and art historian at Princeton University, Kingelez must be understood in the postcolonial context of the history and culture of Kinshasa.
That backdrop includes famous Congolese popular painters, like
Chéri Samba
and
Moké
, who emerged in the 1970s following the country’s independence and painted bright, narrative images of contemporary life. Okeke-Agulu sees in Kingelez’s work echoes of a certain magical-realist strain in Nigerian literature. He also connects the latter’s practice to the aesthetics of the DRC and beyond, with the “formal drama of his art, the bombast and tropical color of his writing, his supreme sense of self-importance, and his own sartorial style,” as Okeke-Agulu writes in the catalogue. That last point is hard to miss: Kingelez liked to dress in immaculate, often-flamboyant outfits in the mode of the country’s sapeurs, or dandies, who defy poverty by wearing crisp three-piece suits and shiny leather shoes.
Advertisement
Kingelez was born in the town of Kimbembele-Ihunga in the DRC (then the Belgian Congo) in 1948, the oldest of nine siblings and the son of farm hands. He received an education from Catholic missionaries, and he applied himself with zeal. “I was the highest ranking student in my class,” he told André Magnin in an interview in 2000, with characteristic self-confidence. “My classmates all noticed and admired my exceptional qualities.” 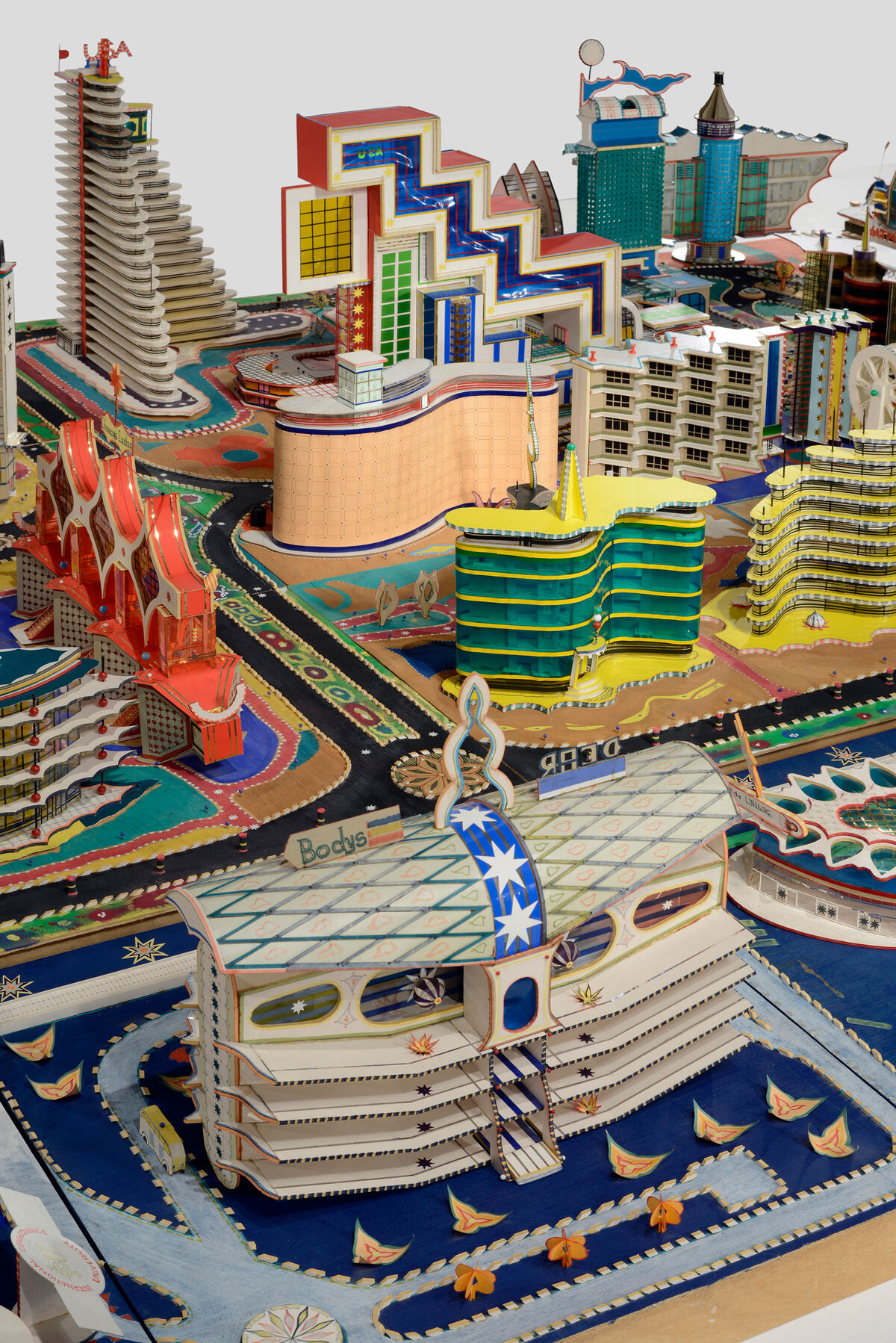 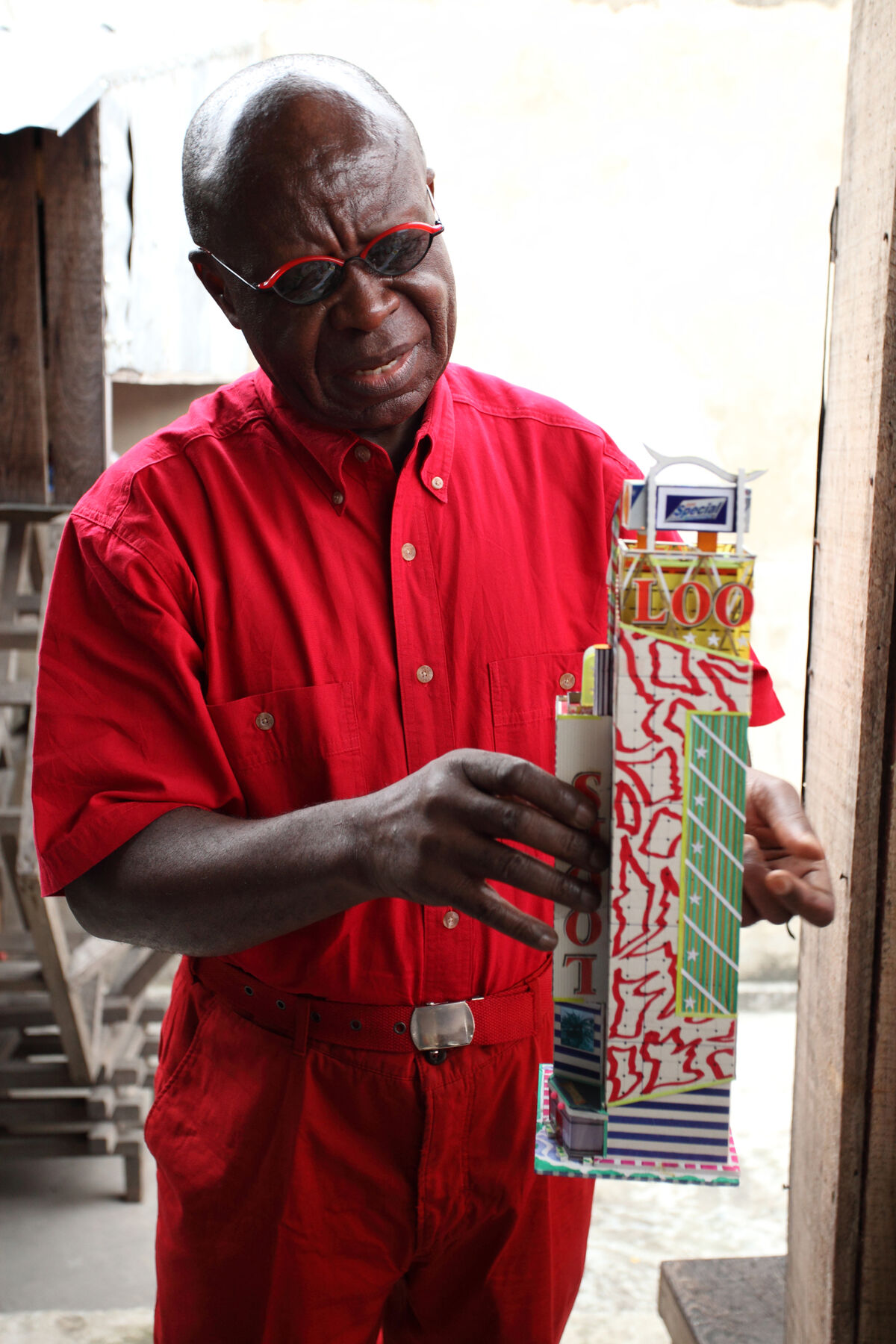 Kingelez moved to Kinshasa at age 22, in 1970, as the country was creating itself anew after 52 years of Belgium’s cripplingly oppressive colonial regime. At the time, President Joseph Mobutu was building vigorously in the city, adding futuristic structures to the skyline alongside the existing Art Deco buildings of Congo’s colonial era—creating something of an “architectural soup,” Suzuki tells Artsy. Kingelez studied at the University of Lovanium, taking classes in economics, business, French, and industrial design (among other subjects) while entertaining the idea of pursuing various civic roles, as Suzuki recounts in her text. He worked as a teacher for a while, but quit when the job did not meet the largesse of his dreams.
Plumbing “the depths of the abyss,” as Kingelez told Magnin in a discussion of his early artistic stirrings, “a deluge of ideas and wild fantasies overwhelmed me, and in the grips of the unknown the solution came to me, like it was dictated from above: ‘working systems’ by which I would leave my mark on the earth. I wanted to create what had never been seen and I would be the first to do it in the Congo.” 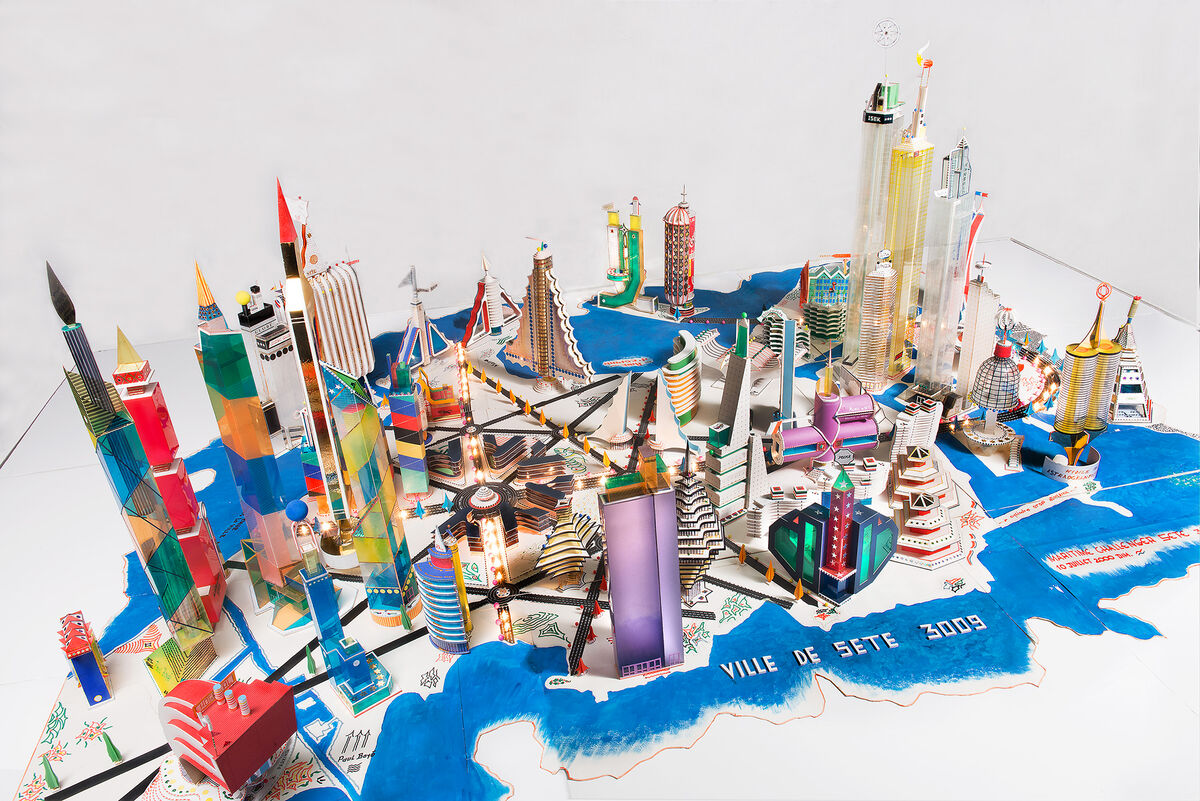 Kingelez started to build his architectural sculptures in the early 1980s, beginning by composing individual structures like his 1982 Untitled, which shows the attenuated form of a church, crowned with an oversized white star. He worked as a restorer for a time at the Institut des Musées Nationaux du Zaïre to keep himself afloat—a job he secured after he took one of his maquettes to the museum on the recommendation of his neighbor. The staff there found the object, Musée National, so sophisticated that they accused him of stealing it, even demanding that he create another one in front of them in hope of catching him in a lie. As the story goes, Kingelez complied, conjuring Commissariat Atomique before their eyes—and leaving them so floored that they offered him a position at the institution.
Kingelez’s maquettes display a sense of civic pride—a belief that government institutions and urban populations can work in harmonious synchronicity—that aligns with the early enthusiasm for Mobutu’s era of post-independence growth in Kinshasa. “I’m taking the first step toward the most sophisticated, the highest civilization,” the artist says in a documentary film that is screened in the exhibition. But Kingelez’s work also manifests a critique, one born partly of the soured promise of independence as Kinshasa grew increasingly chaotic, Mobutu more despotic. It is, writes Okeke-Agulu, “spectacular architectural form as a counter-narrative to the dystopian realities of Kinshasa, the structural chaos of the Congolese state, and, ultimately, the anomie of the global-postcolonial epoch.”
Even as Kingelez’s work remained rooted in the conditions of Kinshasa, he cast an eye overseas, creating timely structures that represented nation states and transnational organizations around the world. In 1994, after the first Oslo Accord affirmed Palestine’s right to self-government, Kingelez created his Centrale Palestinienne (1994), a low-lying structure that supports a tower, all in the colors of the Palestinian flag. And for the 50th anniversary of the United Nations, in 1994, he made a model for what looks like a glimmering casino with stars displayed evenly on its surface, representing the equality of the organization’s member countries. 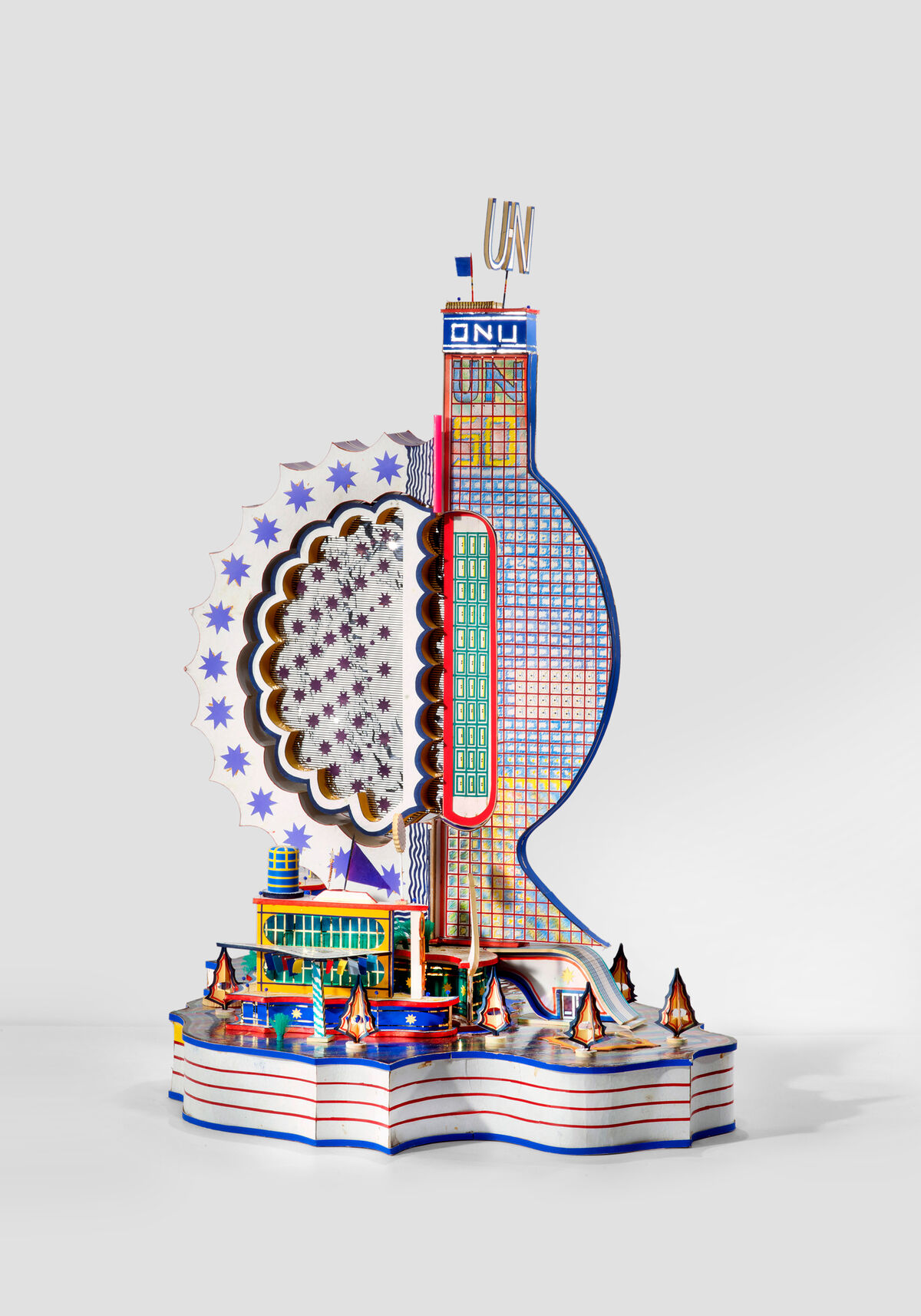 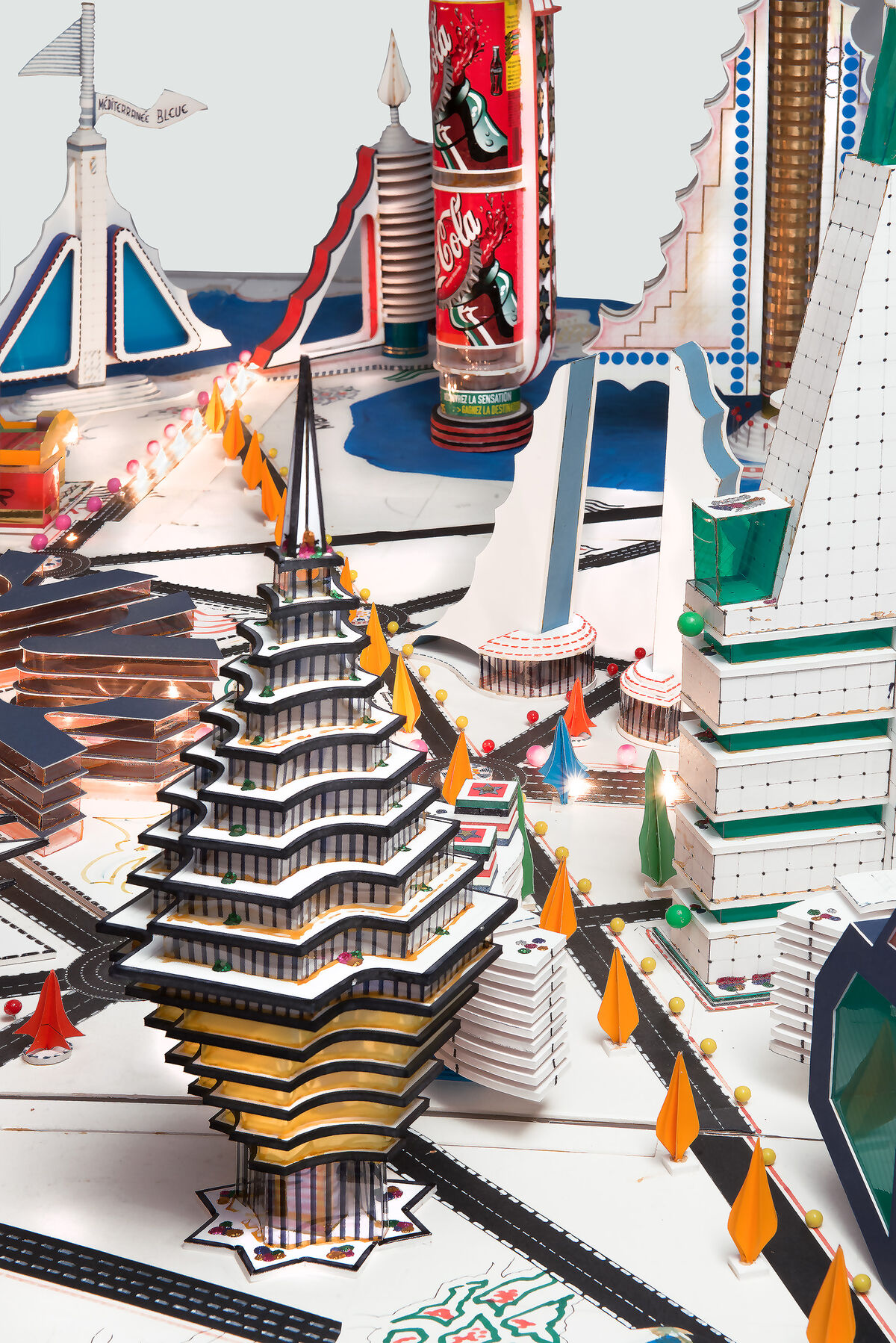 Kingelez’s international outlook is a point that Suzuki stresses. She wants to dispel what she sees as two of the misconceptions surrounding the artist: that he was self-taught, and that he was a visionary who lived in relative isolation. “Even though he didn’t have any formal art or architecture training, he was a university graduate, he spoke five languages,” she says, “and part of his secondary education would have included a study of industrial design. So while he wasn’t in a fine arts program, he was an extraordinarily well-educated and worldly person who had ideas about how things get made.”
It’s an emphasis that should be seen in light of the debate surrounding “Magiciens de la Terre,” the 1989 global survey of art that was billed as the first truly international art exhibition, which also launched Kingelez. It is credited with expanding the Eurocentric art canon, but it’s also charged with reinforcing old prejudices by reifying the binary between West and non-West, and crystalizing the romantic, exoticizing notion of the archetypal self-taught artist as being non-modern: the Other who alone is capable of channeling an ancient, authentic well of creativity. 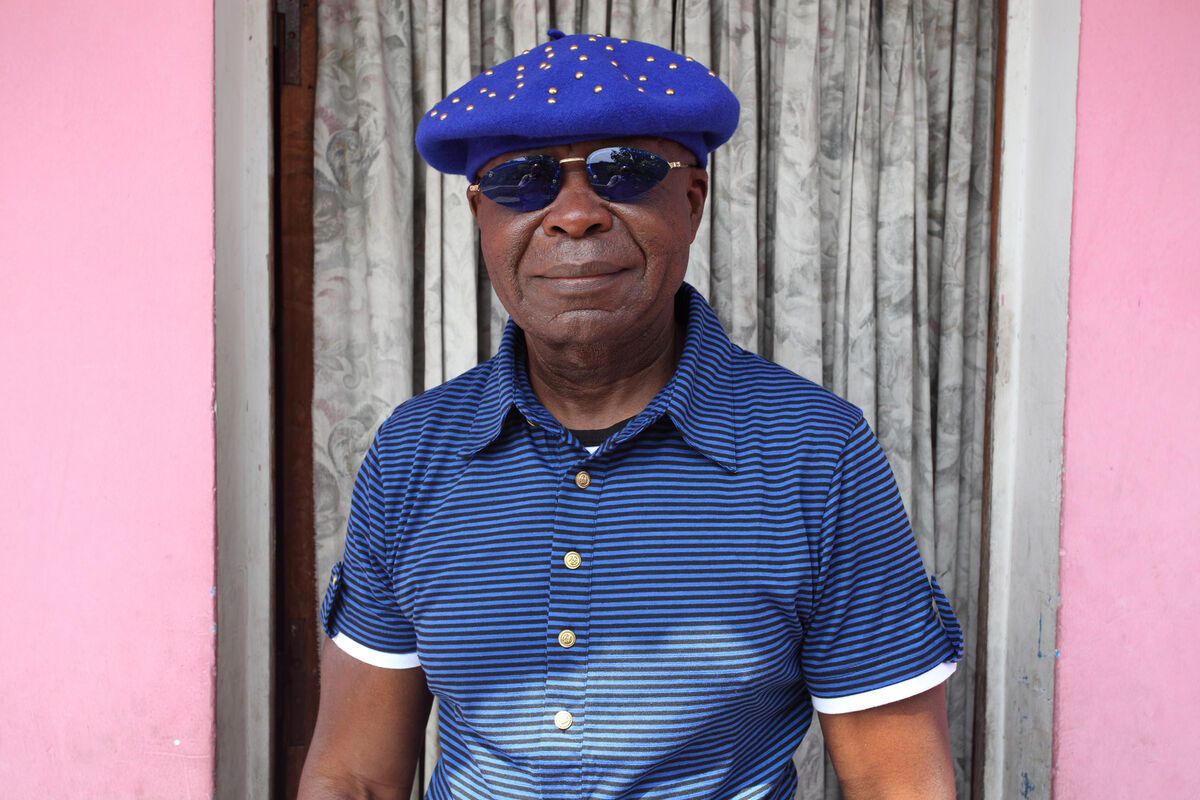 “Some of us had issues with the way that some of [Kingelez’s] work was marketed from the beginning,” says Okeke-Agulu. He objects to the claim that accompanied “Magiciens”—and percolated outward—that “only non-educated African artists can make original work—that the originality of African artists is destroyed with academic training.”
It’s been nearly 30 years since “Magiciens,” but conversations around African art remain fraught. MoMA’s first solo retrospective for a black African artist may mark something of a welcome watershed moment for the institution, but it’s not without its conflicts. It brings the great pleasure and optimism of Kingelez’s work to American audiences and elevates his position in European and American markets, while the artist himself is relatively little-known in Kinshasa. 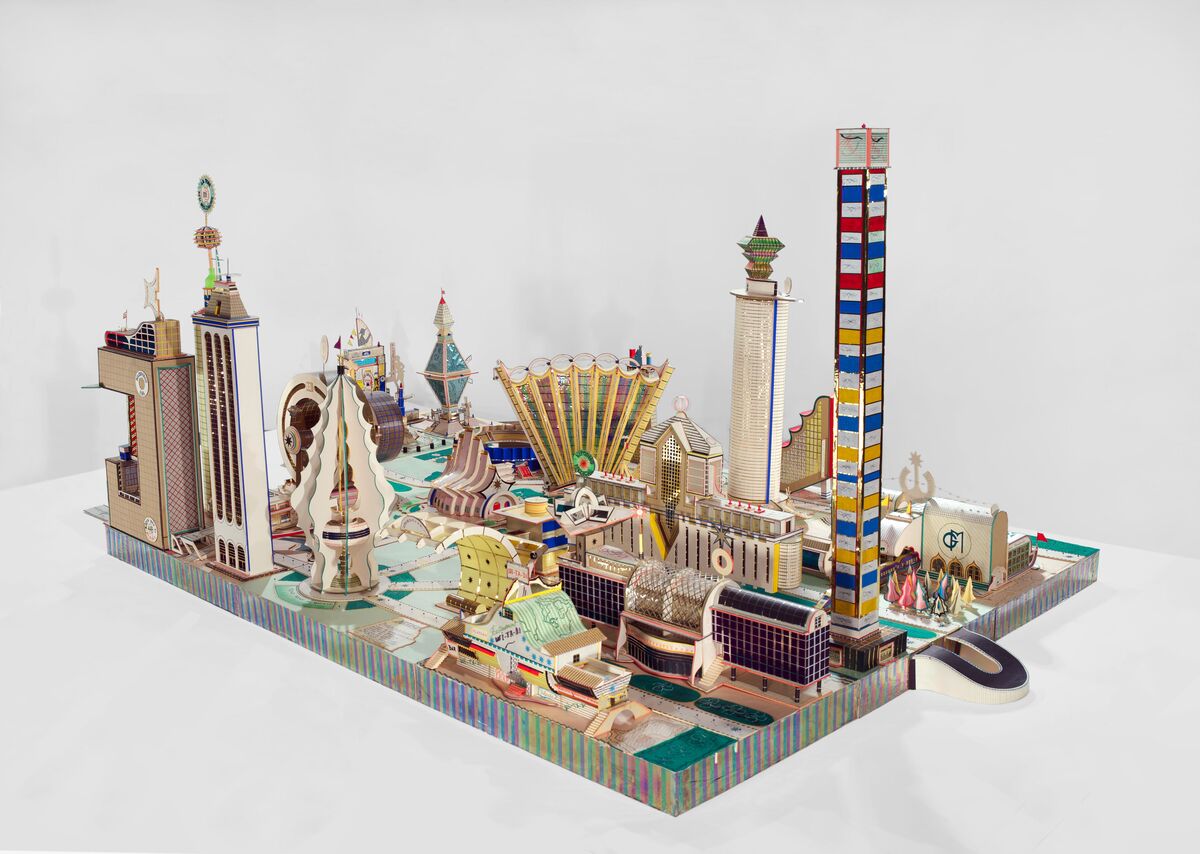 Without Pigozzi’s patronage, it’s easy to imagine that the artist would never have made it onto the MoMA’s walls; the high-profile collector has undeniably brought visibility to Kingelez’s work and played a crucial role in its preservation. But it’s difficult to separate that fact from the reality that the artist’s legacy goes under-recognized in his home country—Suzuki has yet to find a single example of an exhibition of his work held there.
Whether Kingelez’s exhibition will usher African art into MoMA’s canon in a deep, structural sense is another question. Can the artist’s intricate, utopian vision help pave a glittering path toward a more equal art world?
Tess Thackara
Header image: Portrait of Bodys Isek Kingelez by André Magnin. © André Magnin. Courtesy of gallery MAGNIN-A, Paris.
Further reading in Art