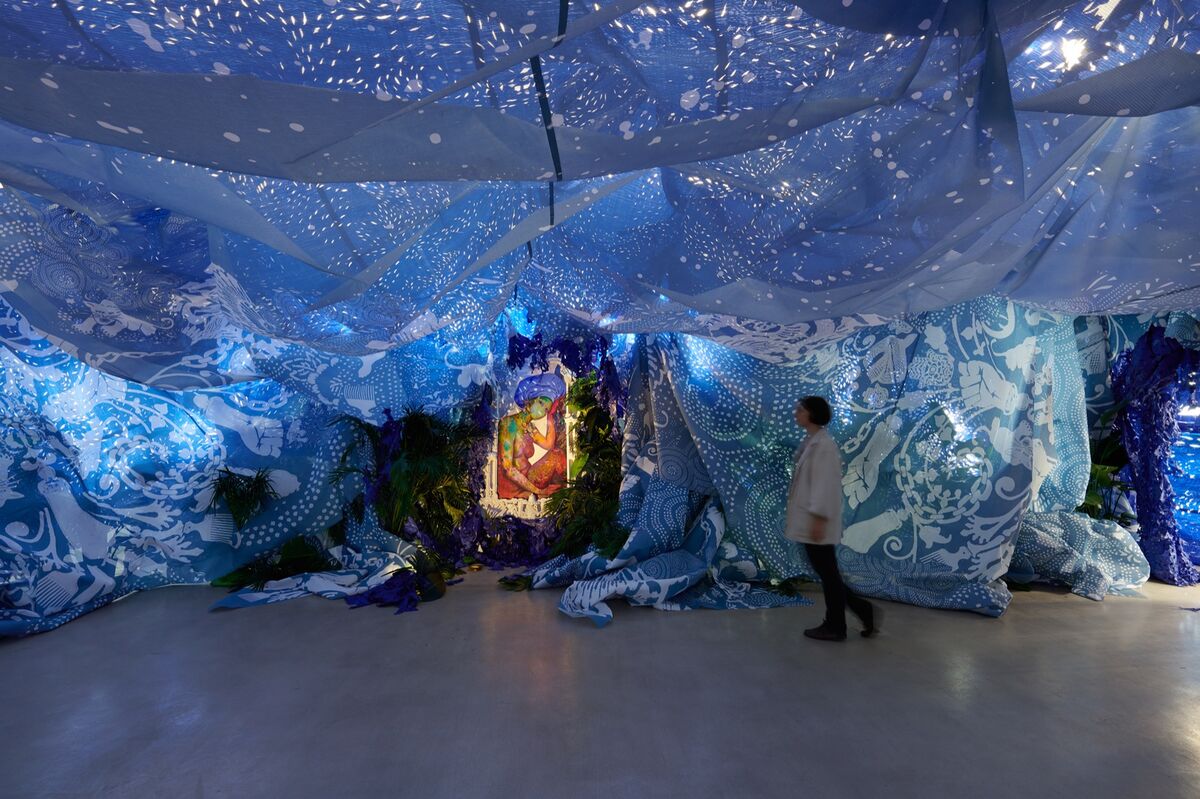 Lift the ragged hem of the blue tarp framing the entryway to James Cohan’s Grand Street gallery and you’ll find yourself in a quixotic, tented fantasy. As your eyes adjust to the dim light filtered through the perforated tarp and a second layer of printed mesh, the gentle perfume of incense wafts toward your nose. It’s a sensual experience, though a slightly jarring transition from the cold, white-walled front desk area.
This dreamy fishbowl is the crux of
Firelei Báez
’s current solo exhibition, “A Drexcyen Chronocommons (To win the war you fought it sideways),” on view through June 16th. The gorgeous (dare I say “immersive”) installation takes its title from the Detroit techno duo Drexciya. Their
Afrofuturist
concept albums from the 1990s and 2000s imagined a utopian underwater world populated by the descendants of pregnant slaves thrown overboard during journeys through the Middle Passage. 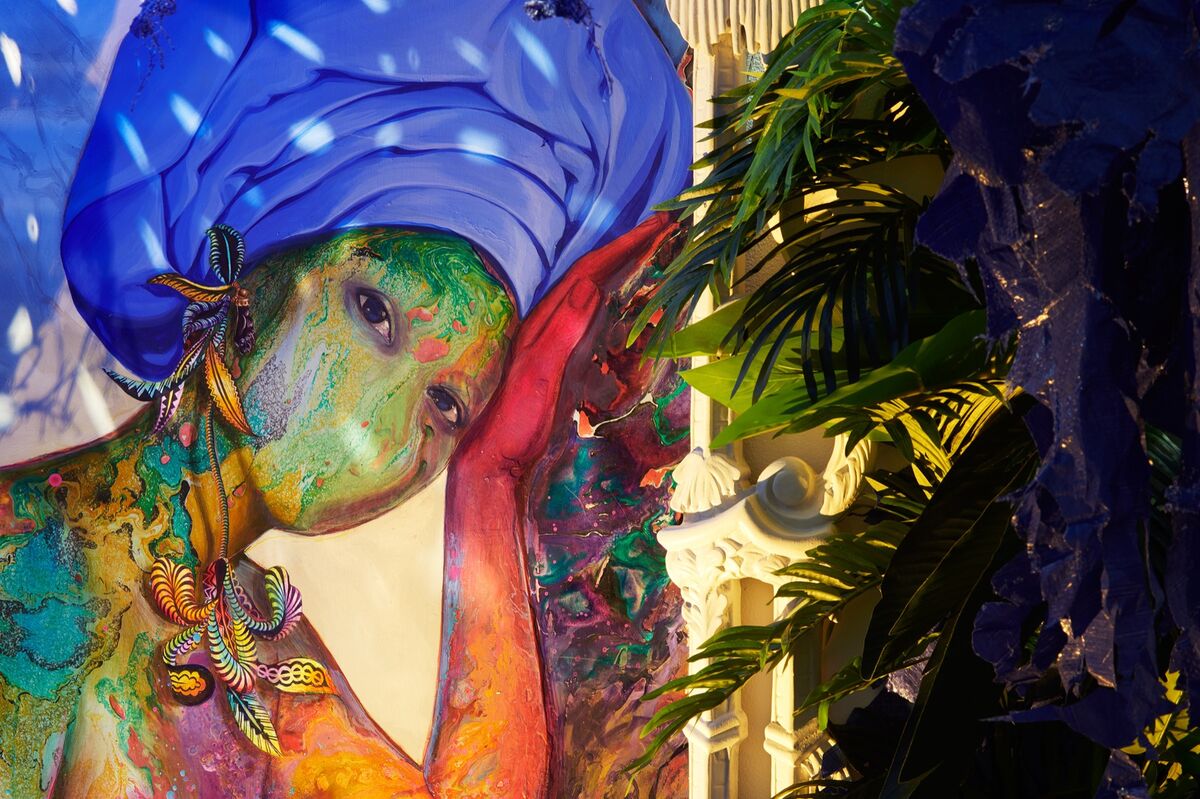 This heady origin story exemplifies the Dominican-born, New York–based artist’s interest in weaving together history and myth in order to tease out—or complicate—dominant narratives about female identity, migration, and the Afro-Caribbean experience. The installation, an off-puttingly comforting and relaxing environment, serves as a “safe space” in which varied cultures can come together to connect.
As Jared Quinton wrote for Artsy in 2016, Báez’s “subject matter could be didactic in the wrong hands, but she sidesteps that risk with her focus on beauty, engagement, and emotion, seducing viewers into a contemplative space in which to confront them with painful histories.”
The overwhelming nature of the azure installation is certainly enchanting—but it’s convoluted, too. The artist relishes in smudging our linear conceptions of time and experience, and her show collapses different histories of migration to evince an ongoing, reciprocal exchange—a flow of bodies and ideologies. Accordingly, “A Drexcyen Chronocommons” abounds with probing contradictions and overlapping meanings. 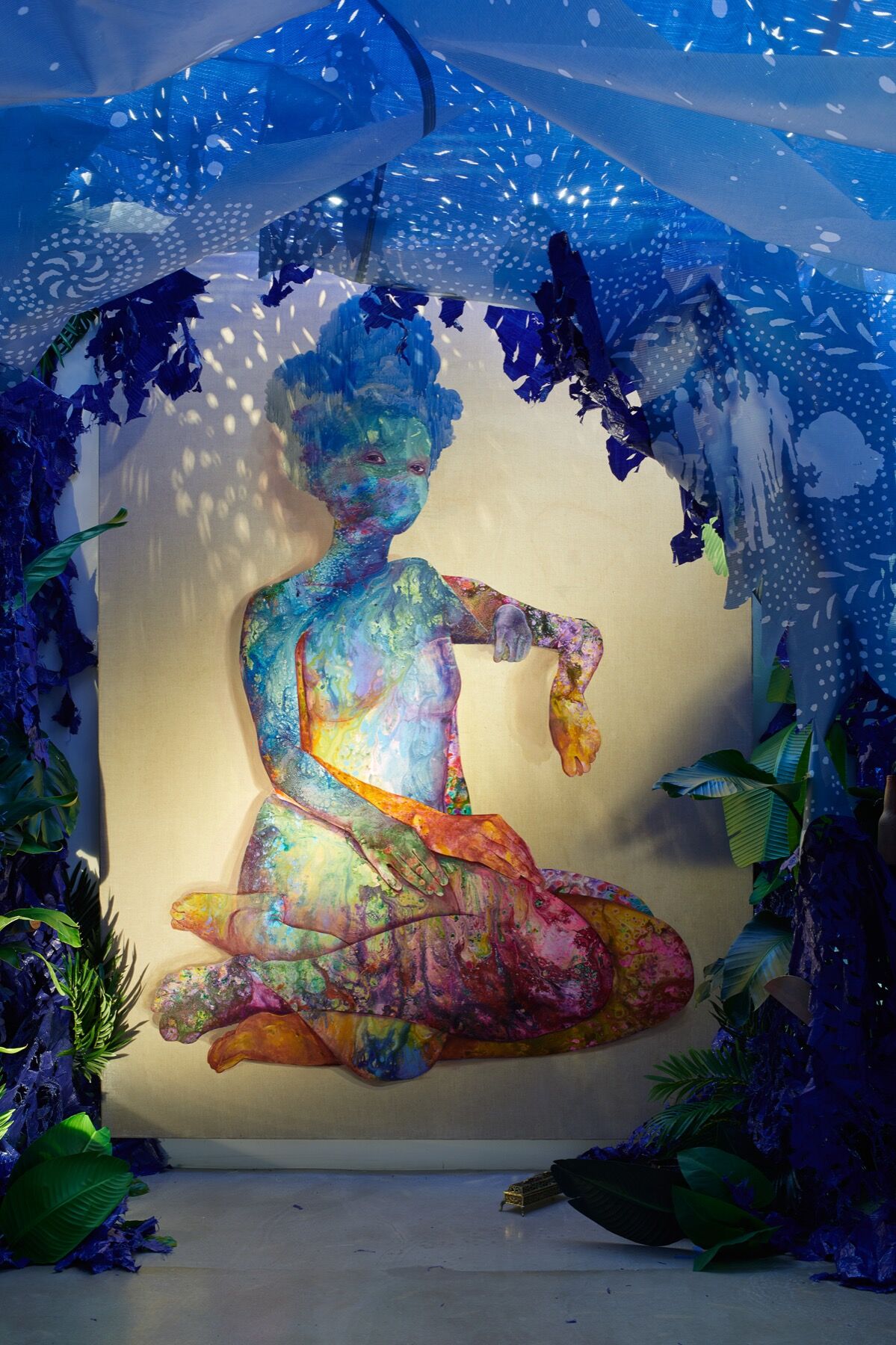 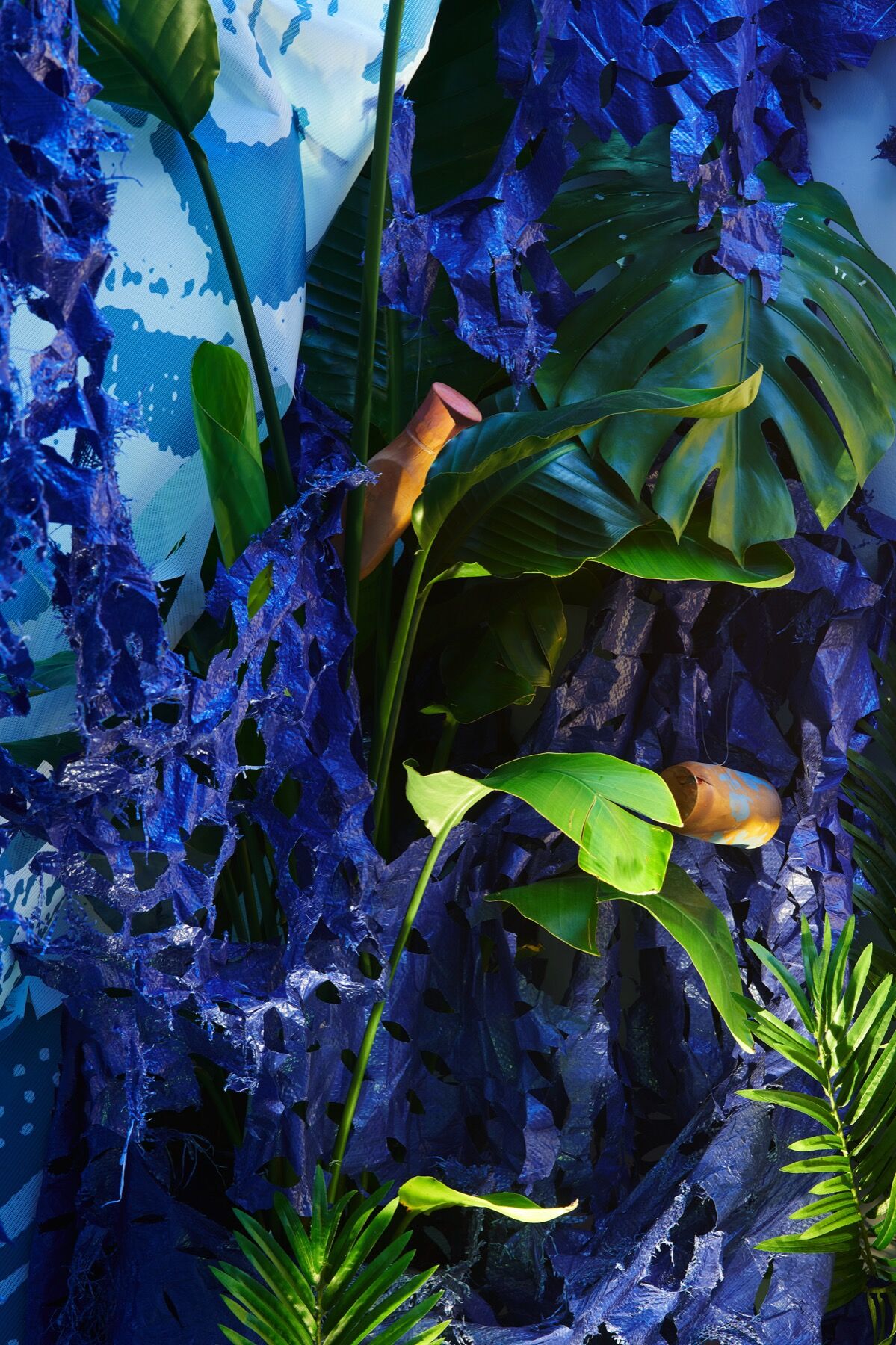 Advertisement
The blue tarp that shapes the space is a material commonly used for temporary shelters, and here, it serves as a dual symbol of disaster and refuge. Underneath the tarp—its perforations allow soft, dappled light to shine through—is a mesh material patterned with a map of the stars as they appeared in the night sky at the onset of the Haitian Revolution (1791–1804). On its sides, various diasporic symbols of resistance butt against a mix of real and fake tropical plants.
The Haitian Revolution—and its often-unacknowledged impact on the geopolitical landscape of the 19th century—is a historic moment that the artist returns to in many of her works. Here, it’s a centralizing reference point for the layered histories and ideas she presents.
The all-encompassing blue of the room, for instance, suggests an oceanic quality that recalls the broader history of the
African diaspora
and the trans-Atlantic slave trade. It also references Caribbean writer Édouard Glissant’s theory of the ocean as a repository for collective memory. At the same time, the color prods and unravels the concept of “the true-blue American.” The indigo-dyeing technique for blue jeans, gallery partner David Norr noted, originally came from West Africa and India. 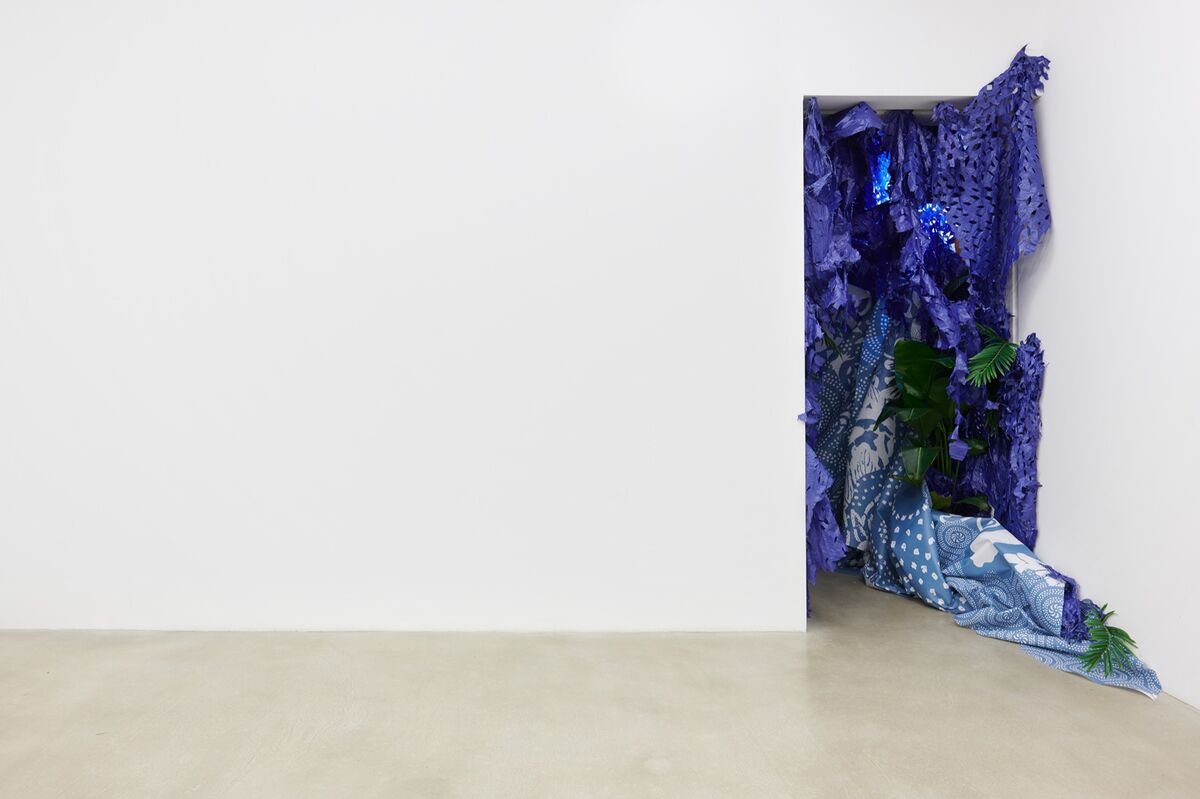 Although it’s not widely recognized, the American landscape—particularly the South—was deeply affected by the revolution in Haiti. The Louisiana Purchase wouldn’t have happened without it. As a meeting point of French, Afro-Caribbean, and American cultures, New Orleans is also poignantly invoked throughout the show.
At the center of these sprawling global histories are the women—real and imagined—who lived through them. On opposite sides of the tent, Báez has installed two monumental paintings in shrine-like niches. The self-assured female nudes catch the viewer between their penetrating gazes. The artist omits their noses and mouths—features often racially stereotyped—but instead of dampening their individual agency, the redaction enhances their auras of mythical prowess and authority. The portrayals obliquely conjure the Haitian priestesses whose contributions to the revolution are usually excluded from its retellings. 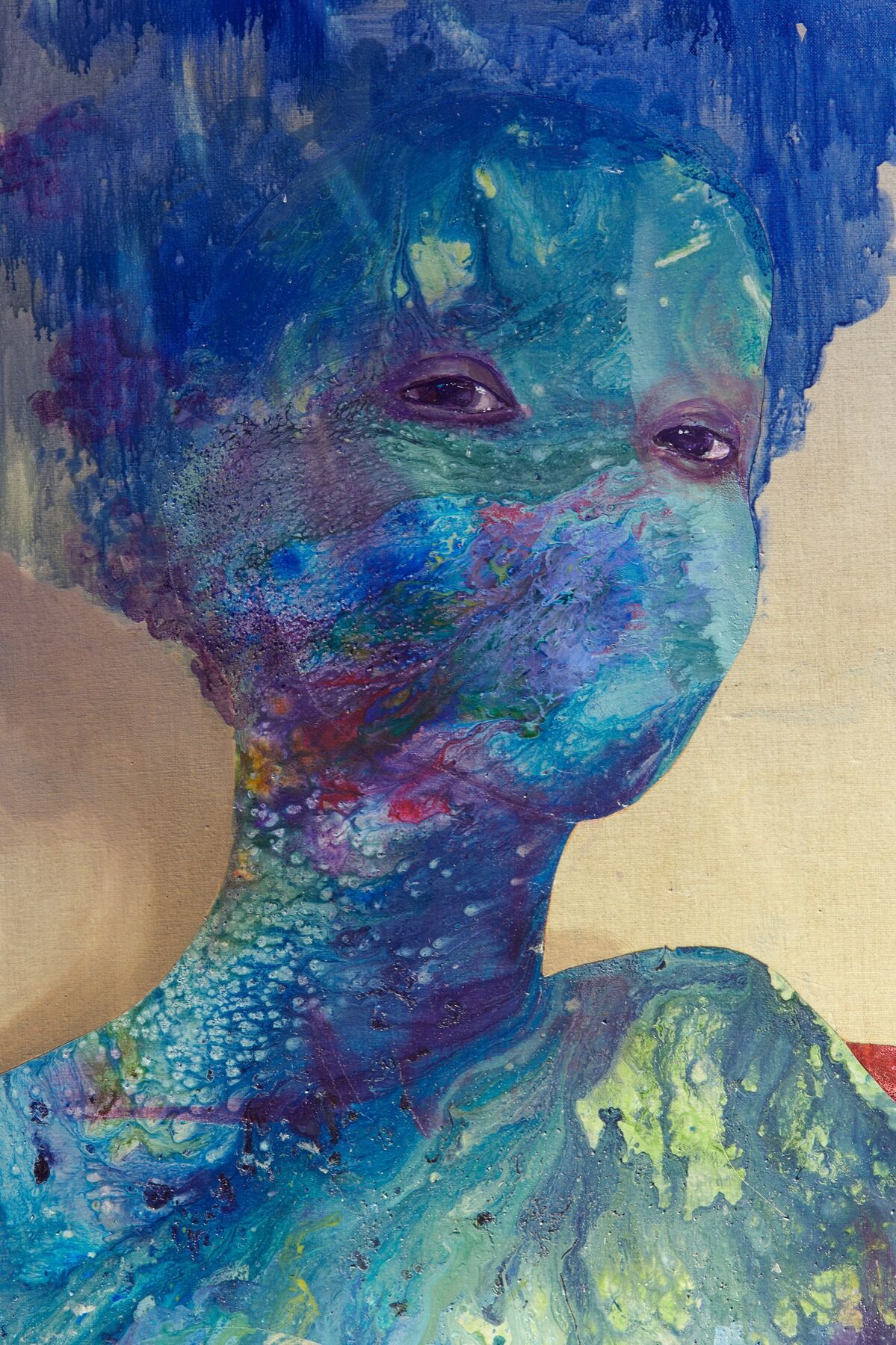 Firelei Báez, In the manner of water and light (detail), 2019. © Firelei Báez. Photo by Phoebe d’Heurle. Courtesy of the artist and James Cohan, New York.

Without clothing or other identifying features, Báez amplifies the symbolic meanings of the women’s tignons, or wrapped head coverings. The tignon exemplifies the often-clashing expectations for women around the world, and Báez frequently calls on the history of fashion to elucidate acts of resistance by women of the African diaspora.
In 18th-century New Orleans, women of color were legally required to wear these headscarves, an anemic measure to diminish their natural sexuality. The same rule applied to enslaved women in the nearby Dominican Republic and Haiti. The limitation—at first restrictive and degrading—became a method for these women, who created evermore elaborate and stylized versions, to subvert their subjugation and express themselves as individuals. Like much of diasporic culture, the restrictive measure was later appropriated in European fashions.
At the far end of the tent, another flap leads to a small back room featuring three paintings and one work on paper that elaborate on contradictory feminine ideals across cultures, particularly as they relate to race. In one of the largest works, An open horizon (or the stillness of a wound) (2019), an archival blueprint of a WPA-era bridge project in New Orleans is the backdrop to two wrestling female figures, who are covered in a Colonial floral pattern. A painted blue wave—a reference to Hurricane Katrina—rushes over the entire composition.
4 Images
View Slideshow 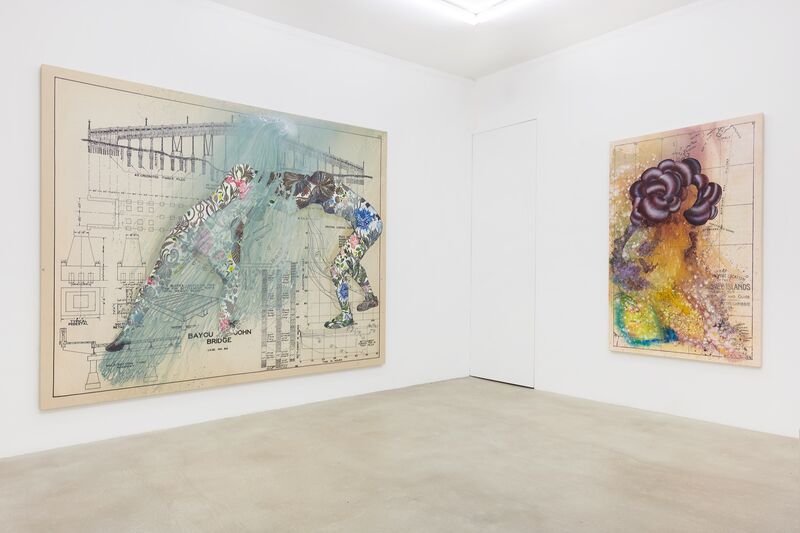 The wrestling women are ripped from a particular corner of YouTube. Viral “wildin’” videos capture a phenomenon where maternal POC elders encourage younger women to fight, then stream the footage online. This seemingly antagonistic tradition is a fantastic departure from the passive and subservient view of femininity that dominates Western thought. In this aggressive ritual, the wisdom imparted from generation to generation foregrounds bodily agency and expression rather than meekness.
In this intoxicating ecosystem that Báez has created, identity becomes malleable, history and folklore compatible, and acts of resistance a tangled web. There is no one truth to the diasporic experience, or even the human one, but the artist has worked valiantly to collapse, explain, expand, and feel them all.
Julia Fiore
Related Stories 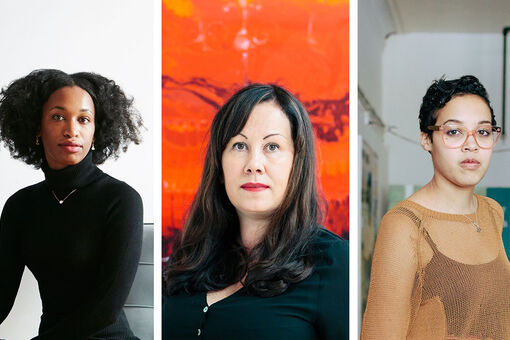 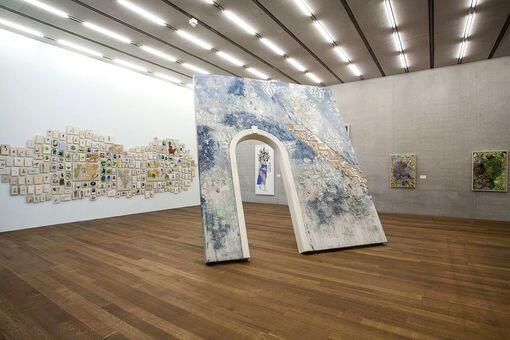