Five Global Challenges Designers and Architects Can Solve in 2017

Heather Corcoran
Dec 26, 2016 8:00am
If end-of-year memes are anything to go by, there’s a certain prevailing sense that 2016 was, to put it lightly, a difficult year. As we look ahead to 2017, what actions can the architecture and design communities take to build smart cities for a better future?
Here are five looming global challenges, and the ways that architects, designers, and cities are looking to address them—in 2017 and beyond.

By 2030, five billion people will reside in cities, many of them in extreme poverty—there’s not enough adequate housing. 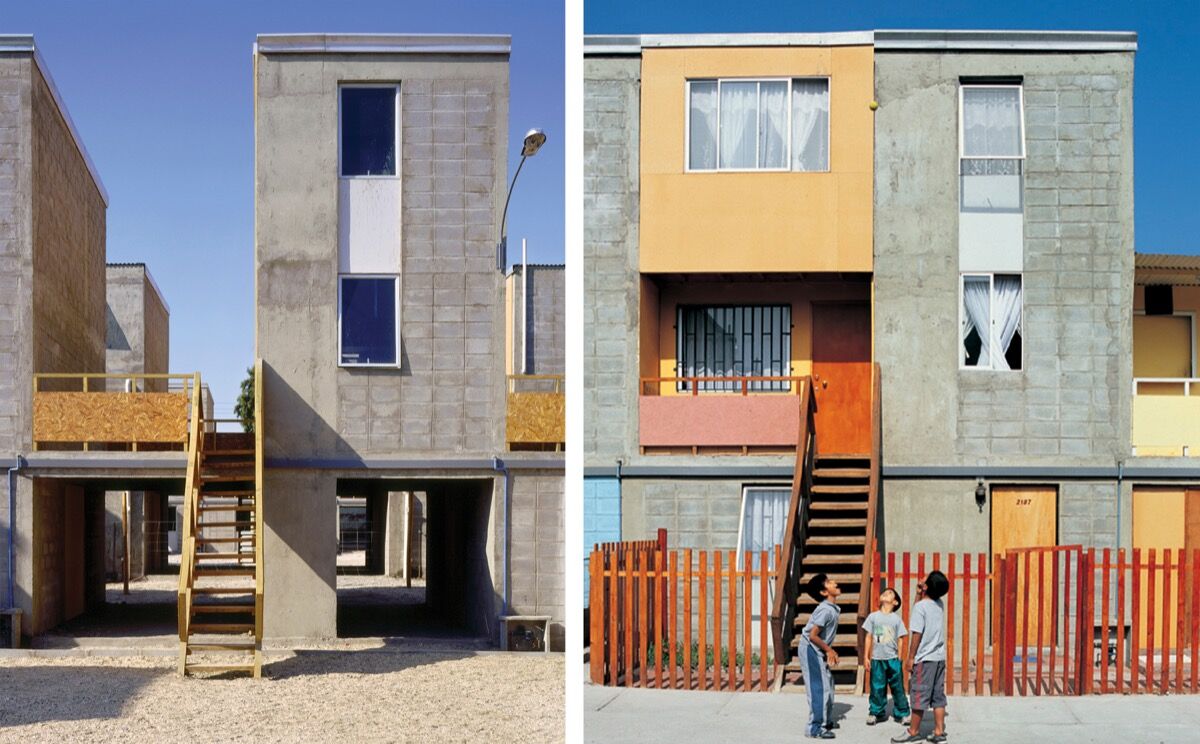 As economics drive more and more people to urban centers, particularly in the developing world, overpopulation and lack of housing are becoming more pressing issues than ever before. And though an estimated two-thirds of the world’s population are expected to live in cities by 2030, few organizations, public or private, are tackling the issue of social housing, the lack of which leaves many people living in dangerous, ad hoc slums.
This is precisely why the architecture world celebrated the selection of Alejandro Aravena, of Chilean “Do Tank” firm Elemental, for the Pritzker Architecture Prize in 2016. Rather than designing shiny museums or residential towers, Aravena practices a more grounded form of architecture—one that shares values with open-source computing and balances private commissions with people-focused social projects.
Among Elemental’s most innovative work is the firm’s approach to incremental housing. Unfinished, but fully functional houses offer people the opportunity to develop over time, as money allows and as needs dictate. Further democratizing the concept, Aravena has shared the architectural plans for four such concepts—completely for free, as with open-source software—on the Elemental website so that anyone can use them.
“What we architects model is not bricks or stones or steel or wood, but life itself,” Aravena said at the Pritzker ceremony at the United Nations this past April. “Architecture is about giving form to the places where people live. It is not more complicated than that but also not simpler than that.”

Global waste production is projected to triple by 2100—to the tune of more than 11 million tons per day. 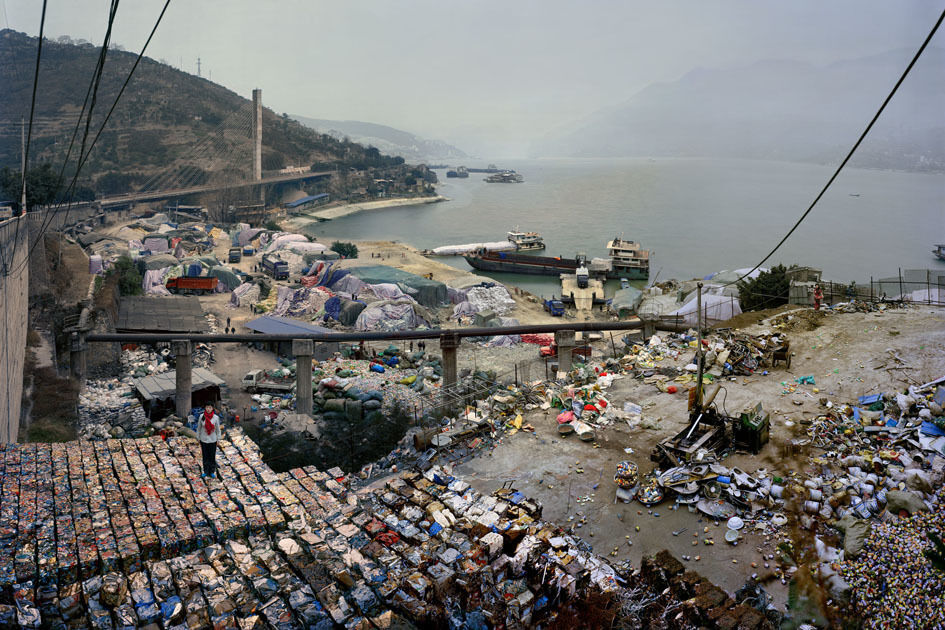 Chen Jiagang
The Great Three Gorges - Kuimen's Scenic View
Contemporary by Angela Li
Advertisement
Cities around the globe have long dealt with trash by hiding it from sight. Although recycling initiatives have helped to chip away at what’s being thrown away, the world still produces a staggering amount of trash—and that number keeps rising.
To solve the problem at the source, municipalities are setting ambitious goals to reduce the volume of waste being sent to landfills. These goals span Sweden, which burns trash to create energy, to New York City, which set a trash-free goal for 2030 as part of the wide-ranging #OneNYC Plan.
It’s a problem that requires tackling numerous streams of waste—recyclables like paper and plastic, organic material, electronics, textiles, and hazardous household materials—within the existing infrastructure of a city, says Bridget Anderson, Deputy Commissioner of Recycling and Sustainability for the New York City Department of Sanitation. “We look at it on a macro scale and then have to think: On the ground on a day-to-day basis, what is the pattern of waste flow in the city? What is the type of waste that gets thrown away? Where does that happen? And how do we capture it?”
Organic waste, in the form of uneaten food, accounts for about a third of the waste produced in New York City. This waste breaks down in landfills, releasing harmful greenhouse gases like methane. To counter this, New York City is following in the steps of cities like San Francisco, Seattle, and Portland, to roll out an organic material collection program. This initiative will expand citywide by the end of 2018, among other programs to reach the zero-waste goal.

Our oceans are getting sicker—by 2050, there will be more plastic than fish in the oceans.

Solution: Find a way to filter the sea and repurpose ocean plastic. 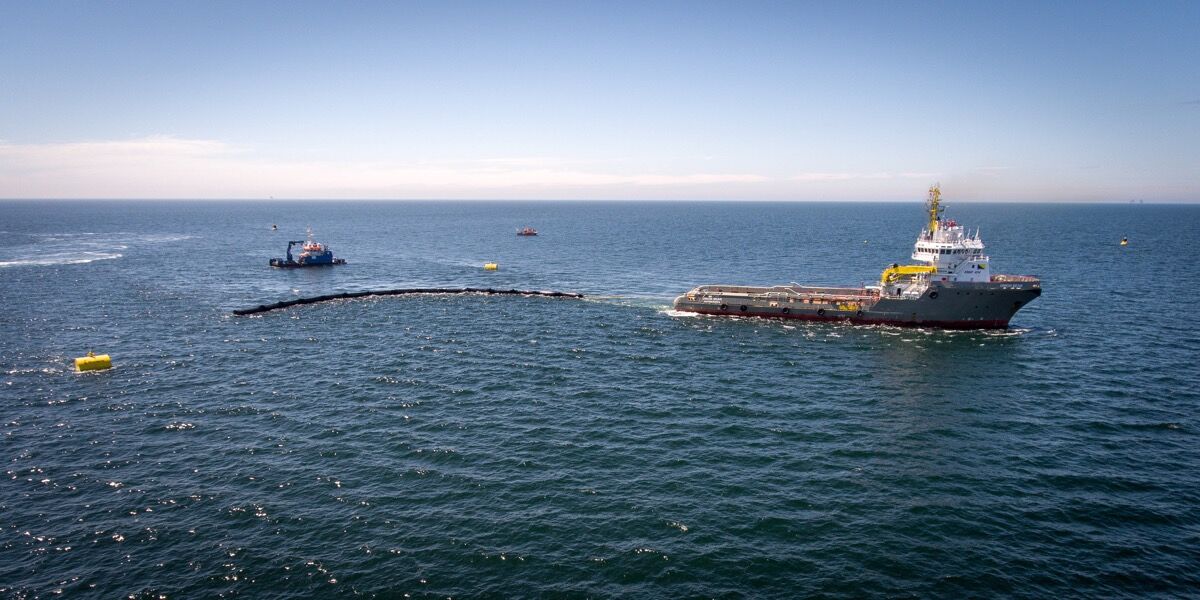 Photo courtesy of The Ocean Cleanup.

If there’s anything the world loves, it’s a young CEO with a great idea. But that’s just a small part of the reason Boyan Slat has been gaining global buzz. Still only 22 years old, the Dutch inventor and entrepreneur has made a name for himself by investigating ways to clean ocean water—and he’s ready to put his concepts to the test.
According to Slat’s organization The Ocean Cleanup, which he founded in 2013, more than five trillion pieces of plastic litter the ocean today, centered in five patches collected by currents. To help remove it, Slat’s team has focused on finding energy-neutral ways to filter the ocean by harnessing the very currents that cause these buildups. In 2016, The Ocean Cleanup launched a €1.5 million, 100-meter-long barrier off the coast of The Netherlands to test the filtering system in harsh conditions.
The group is planning to deploy its largest pilot yet in the second half of 2017—an important step toward its goal to begin to clean the Great Pacific Garbage Patch (the largest concentration of plastic trash in the ocean) by 2020. According to the group’s projections, one passive system could remove about half of the Great Pacific Garbage Patch in as little as 10 years.
Slat’s clean-up project isn’t the only initiative looking to clean plastic from the oceans. Major brands are also finding ways to repurpose ocean plastic into products. This past year, Adidas partnered with Parley for the Oceans, an initiative committed to raising awareness about threats to the planet’s oceans, to create a line of athletic gear, including official jerseys for soccer clubs Real Madrid and Bayern Munich, made from recycled ocean plastic. The brand is committed to creating 1 million pieces with the material over the course of 2017.

Food production needs to increase by 70 percent by 2050 to keep up with the demand of our growing population.

Solution: Bring the farms to the city with vertical gardens run on waste. 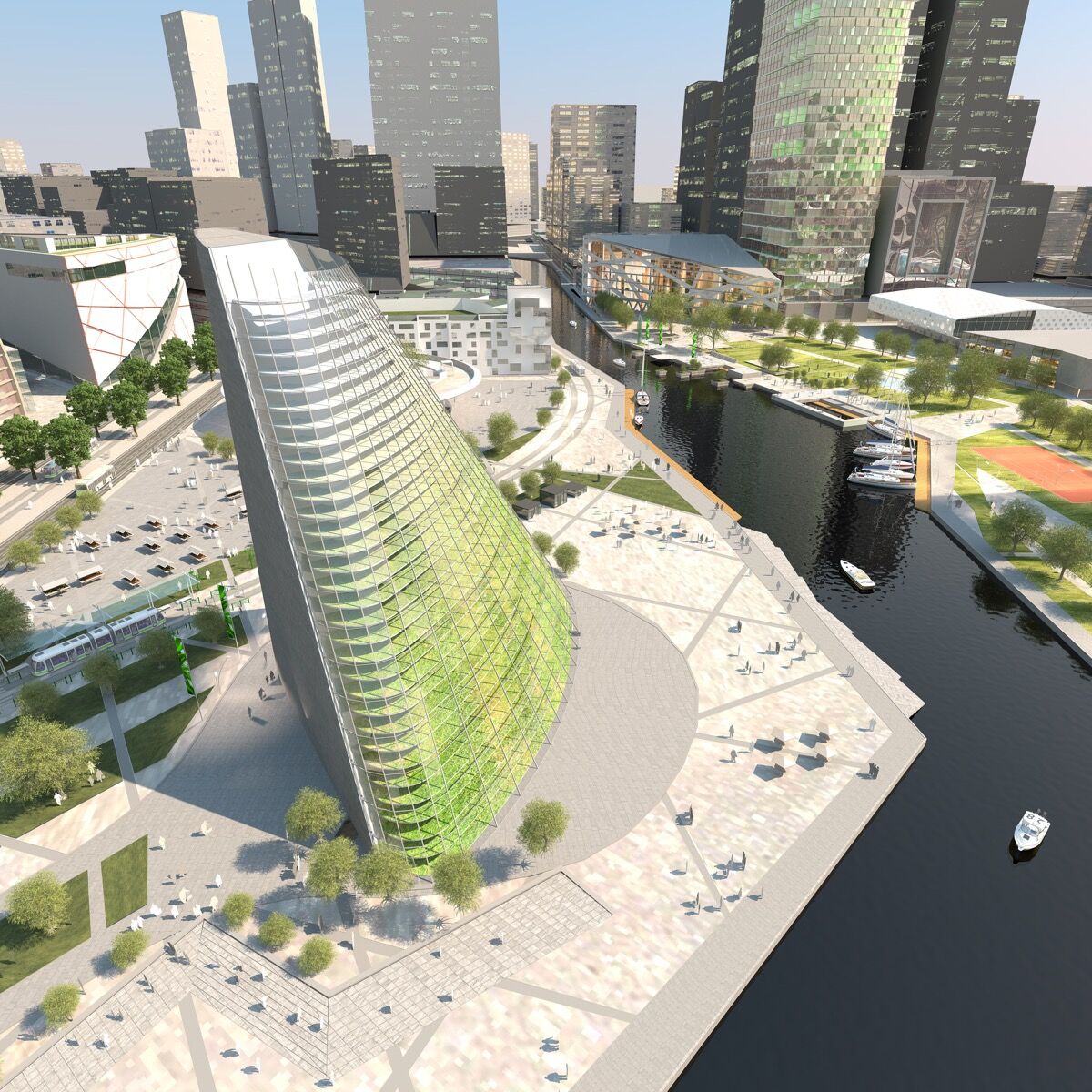 Rendering of The Plantagon Greenhouse by Sweco. Courtesy of Plantagon International.

Forget Soylent. To feed a growing population, experts say cities will need to become new centers of food production. Some dozen steps may stand between a farmer and a consumer, which is why an apple on a supermarket shelf may be up to 11 months old. Today, innovators are studying everything from rooftop farms and vertical gardens to indoor hydroponics to create sustainable food sources in the urban environment.
Sweden’s Plantagon is one firm that sees the food crisis as part of a larger infrastructure problem, where food insecurity and artificial diets are inexorably linked to economic inequality and the large-scale challenges of energy and waste. With the goals of both feeding its cities and building sustainable infrastructure for the future, they’re planning to break ground on their first demonstration plant, the World Food Building, in 2017, for which they’re working with Sweco Architects.
Located outside of Stockholm, the building will include a greenhouse capable of producing ten times the amount of produce as a conventional greenhouse on the same footprint. It will also feature a 17-story office tower that will use the local industrial waste in a symbiotic system that enables food production while helping to power the city around it.
“A city basically means infrastructure, and most of this infrastructure has some waste flow in terms of surplus energy from buildings, CO2 from industry, waste water, food waste,” explains Sepehr Mousavi, Sustainability Strategist and Standardization Expert at Plantagon. “We can connect the systems together to use our waste as a resource.”
His team is hoping that the World Food Building will prove that vertical farming is not just eco-friendly, but that it’s economically viable. By rethinking our relationship to agriculture, Mousavi says, “food production is an enabler for smart and sustainable cities.”

The world’s population is aging fast—by 2050, the global population of older persons is projected to more than double its size, reaching nearly 2.1 billion.

Solution: Designers are addressing the challenges of aging before they arise.
People are living longer, but the systems in place for the aging population currently range from nonexistent to inadequate and uncomfortable. In the United States, where the elderly often spend their final years in nursing home facilities, there’s a growing interest in “aging-in-place.” But retrofitting existing houses to accommodate caretakers, wheelchairs, or the changing physical abilities that may come with aging, can become a prohibitively expensive proposition.
One firm that has been at the forefront of universal design (simply put, architecture and product solutions that work for the widest range of abilities possible) is Michael Graves Architecture and Design (MGA&D). “Aging isn’t sexy,” says MGA&D principal Rob Van Varick of the design industry’s slow response to the aging population problem, despite the fact that in the U.S. 76 million baby boomers control 70 percent of the country’s disposable income. “But neither were eye glasses a generation ago. We see design as the tool that has the power to transcend stigma and revolutionize design for aging and disabilities.”
Following the 7 Principles of Universal Design, as well as public space accessibility guidelines laid out by the Americans with Disabilities Act of 1990, the firm uses ethnographic research to identify challenges and create products and buildings that are as appealing as they are useful. This philosophy had led Van Varick’s team to consider an eighth universal design principle, aspiration, to fuel demand and lead to greater adoption. “Any design that follows the 7 Universal Design principles, but where appearance is secondary, or ignored, leads to stigma, limited acceptance, and therefore 100 percent lost utility,” he notes.
And MGA&D is not the only firm focused on finding solutions. In 2016, architect Matthias Hollwich of Hollwich Kushner put forth plans for a conceptual skyscraper called Skyler that focuses on community as a resource to care for people of all ages.
As demographics shift, designers like Van Varick see the future of design as a quest for human-centric solutions. “It often comes down to designers having empathy for end users and a passion for designing solutions that meet people’s functional needs, as well as their feelings.”
Heather Corcoran
Related Stories