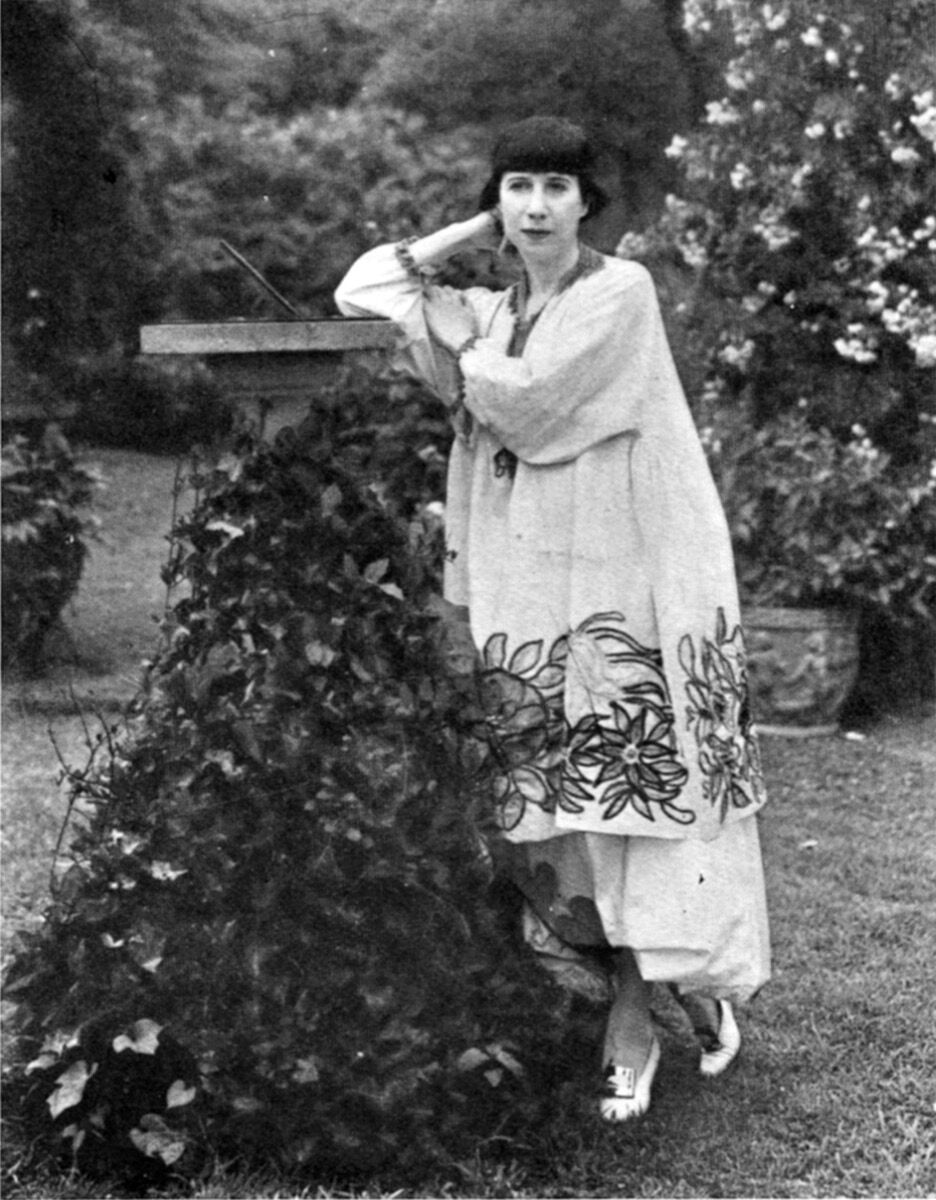 Florine Stettheimer
was a painter of eccentric and extravagant tastes. “I like slippers gold / I like oysters cold / and my garden with mixed flowers / and the sky full of towers,” she declared in a poem penned in the early 1900s.
Her canvases similarly brimmed with sparkling finery, lush bouquets, and soaring skyscrapers. But within these ethereal compositions, she also embedded some of the most subversive imagery of the early 20th century: gender-bending, sensual depictions of herself and her community (which included
Marcel Duchamp
and
Georgia O’Keeffe
) that have only recently been recognized as trailblazing the way for feminist art.

Stettheimer came of age in the early 1900s, during the Harlem Renaissance and the Jazz Age, when radical music and dance coursed through New York City’s underground bars and clubs. The avant-garde movements
Dada
and
Surrealism
were also taking root in the metropolis, revolutionizing what art could be and express. Meanwhile, social columns spoke of the emergence of a “New Woman” who was more active in the public sphere (though preferably still married and engaged in childcare). All of these shifts touched Stettheimer, as she in turn influenced the culture of her time. 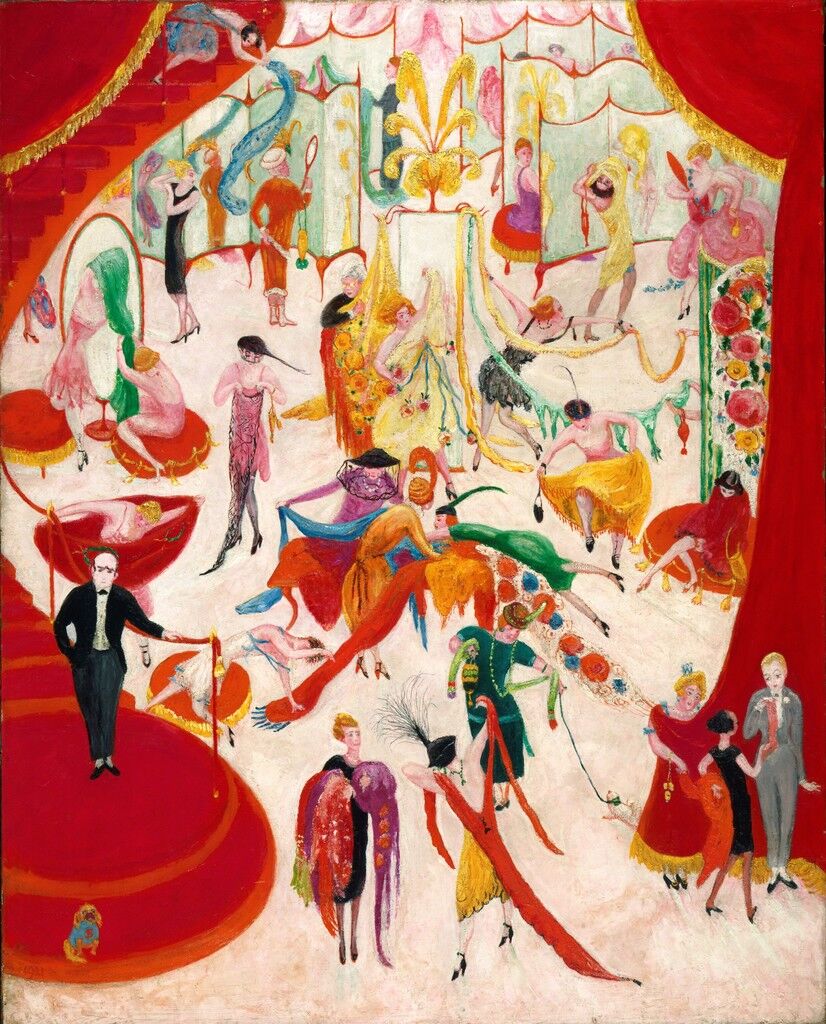 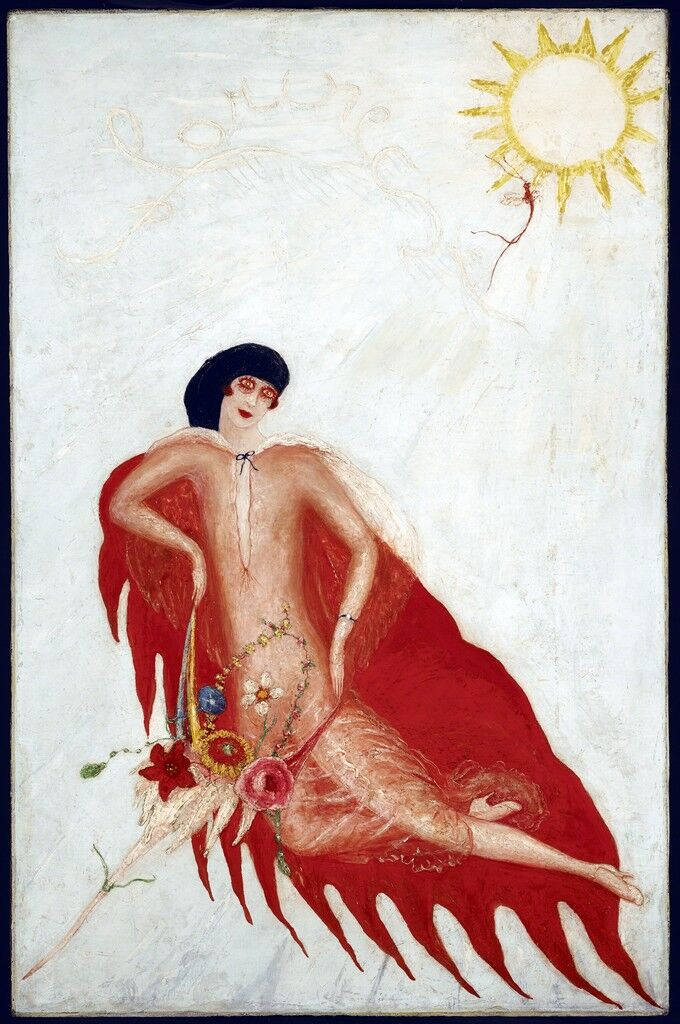 Florine Stettheimer
Portrait of Myself, 1923
Avery Library
She was born in Rochester, New York, in 1871 to a wealthy Jewish father who made himself scarce but provided amply for the family. In his absence, the family roost was dominated by women. While the eldest sister married and moved away at a young age, Rosetta, the mother, and her three remaining daughters, Florine, Carrie, and Ettie, lived together for the rest of their lives.
The four ladies were considered a gaggle of spinsters by some outsiders, but to those who knew them well, they were a band of unfettered pioneers. They traveled through Europe during the girls’ youths, landing back in New York as World War I took hold. Florine would go on to establish her life there as a painter at the heart of a free-spirited social circle.

The world of Stettheimer’s studio

The nexus of Stettheimer’s adult life, as well as her enduring legacy, was her studio. Not only did she paint in a flamboyant room overlooking Manhattan’s Bryant Park, the space also became the stomping grounds for New York’s brightest creative luminaries. 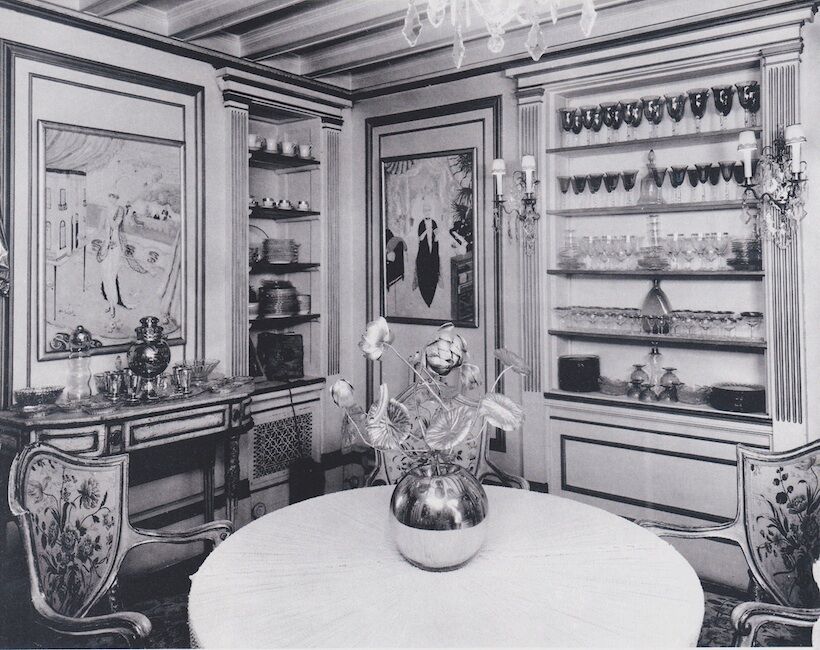 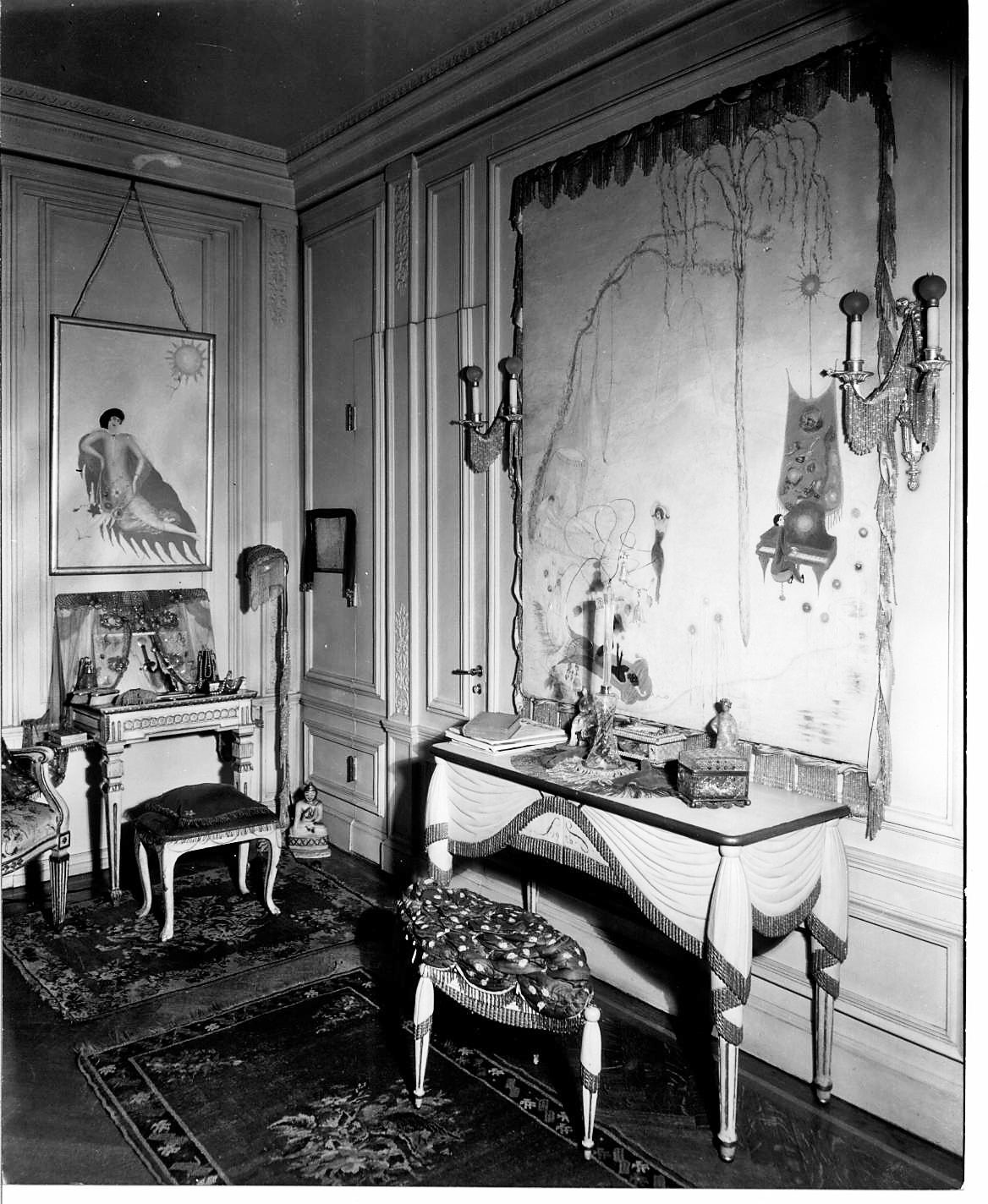 Advertisement
During the 1910s and ’20s, Stettheimer and her two sisters, Ettie and Carrie, were known as salonistes before artists or writers. And Florine, in particular, drew her close friends—artists Duchamp, O’Keeffe,
Alfred Stieglitz
,
Gaston Lachaise
, and
Carl Van Vechten
—together to discuss their inspirations and hatch plans for daring artworks. It’s been conjectured, for instance, that some of Duchamp’s greatest works, like his cross-dressing alter ego Rrose Selavy, were inspired by Stettheimer and her soirees.
In her studio, women and men existed on as equal a playing field as was possible at the time. And Stettheimer drove the point home with one strategically placed painting of her own creation. A Model (Nude Self-Portrait) (ca. 1915) hung smack in the middle of the room. It depicted herself, completely nude and gazing confidently out at any guests or parties that might materialize in the space.
For a woman to paint herself in this way was unprecedented at the time. And Stettheimer was baldly proud of it: She not only made it the centerpiece of the room, but also the focal point of a later painting.
Soireé (ca. 1917) shows members of Stettheimer’s social circle lounging and poring over paintings. Artists
Gaston Lachaise
and
Albert Gleizes
, writer Ettie Stettheimer, playwright Avery Hopwood, and Hindu poet Sankar are all present. Critic Leo Stein sits at the center on a little red rug as the nucleus of this creative constellation, but it’s Stettheimer who is clearly lording over this universe from her perch in A Model (Nude Self-Portrait). 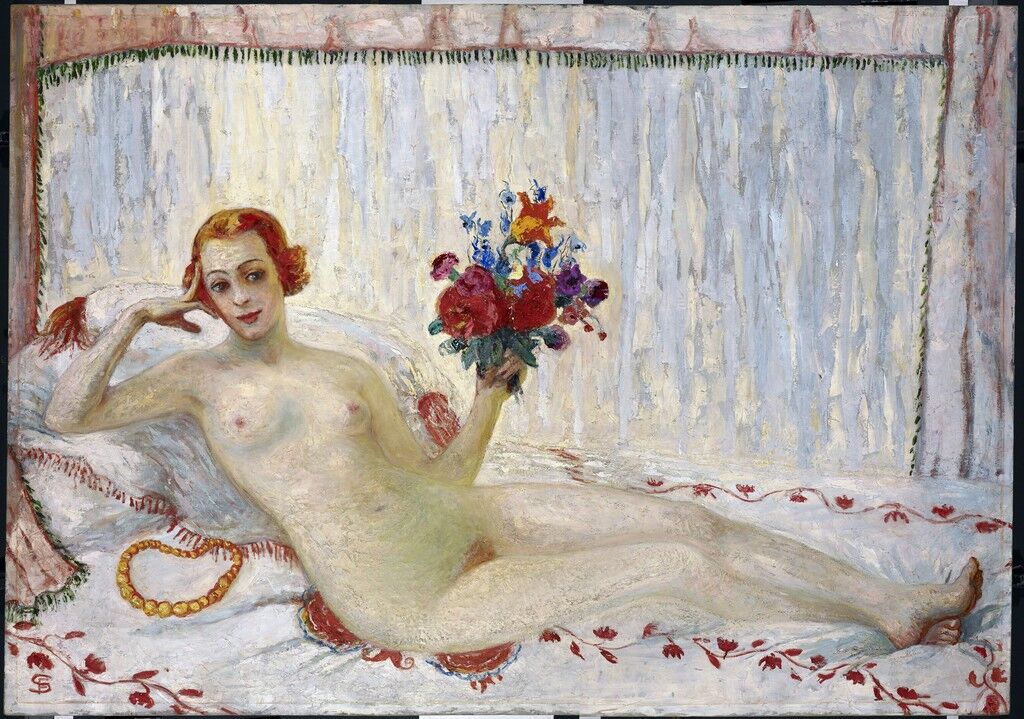 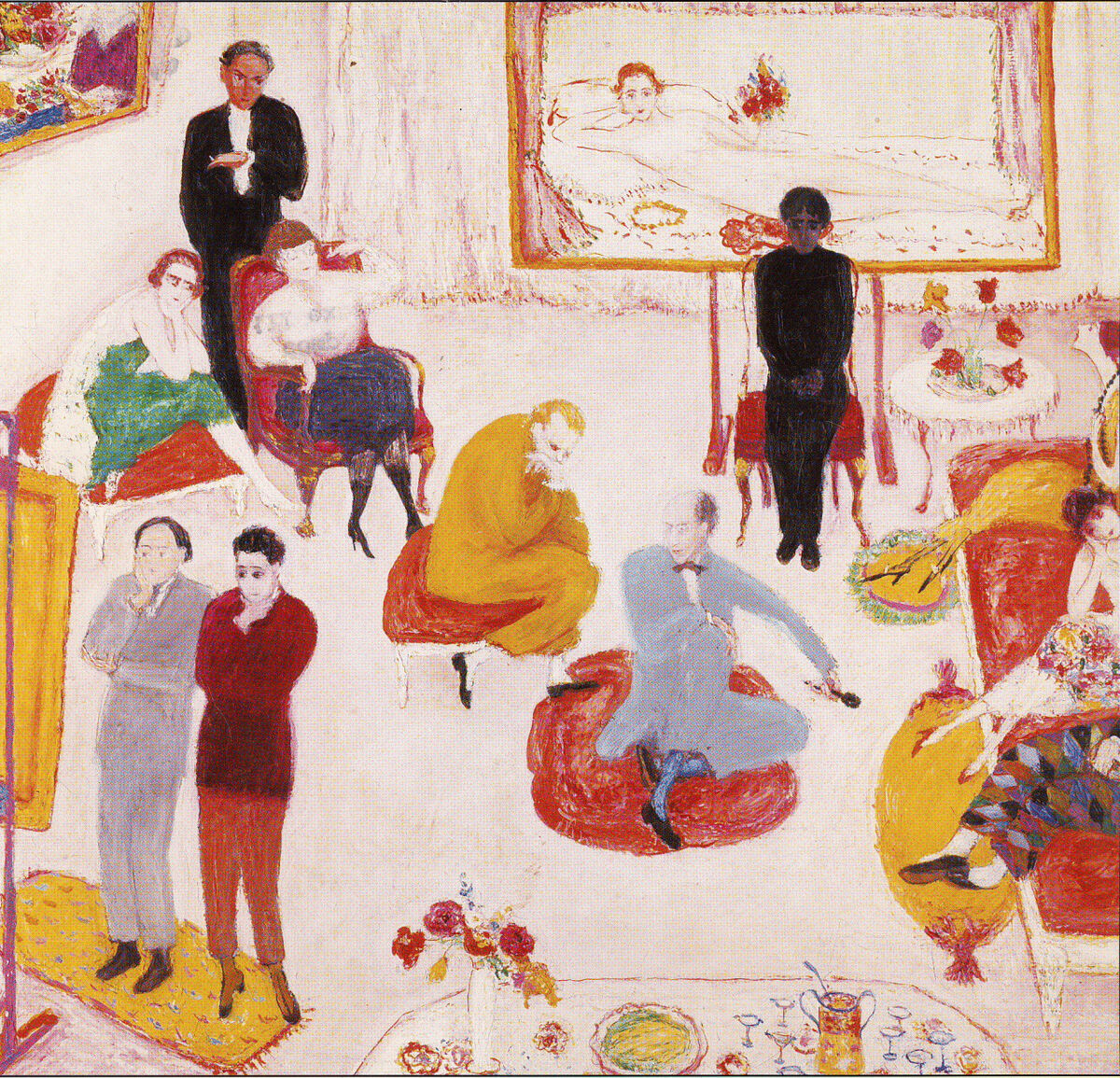 A forerunner to the feminist movement

Stettheimer alluded to the scandalous nature of the work, as scholar Barbara Bloemink has pointed out, by inserting into the scene a wide-eyed Juliette Roche Gleizes (an artist and wife to Albert), who ogles the painting with a shocked expression on her face. It wasn’t a rare reaction to Stettheimer’s work, which didn’t fit easily into any of the era’s burgeoning movements.
There were certainly elements of Surrealism and Dada in her paintings, but they were nonetheless passed over regularly by critics and scholars (both during her lifetime and after), who focused instead on their feminine aspects. Their sprays of flowers, theatrical scenes of New York life, and supine ladies wrapped in gossamer were too often misunderstood as the cousins of Rococo froth, naive painting, or decorative art.
But a closer reading of these characteristics reveals not only a radical fusion of avant-garde influences, but also a celebration of womanhood—and female autonomy—that today reads as brazenly feminist.
Take Stettheimer’s Family Portrait, II (1933). It shows the artist, her mother, and her sisters in a surrealistic landscape that is an amalgam of their home, the Manhattan skyline, and a levitating arrangement of larger-than-life flowers. Age-old symbols of femininity and the female sex, the flowers take center stage. Each of them, as scholar Linda Nochlin has conjectured, could represent one of the Stettheimer daughters—bursting with irrepressible individuality. 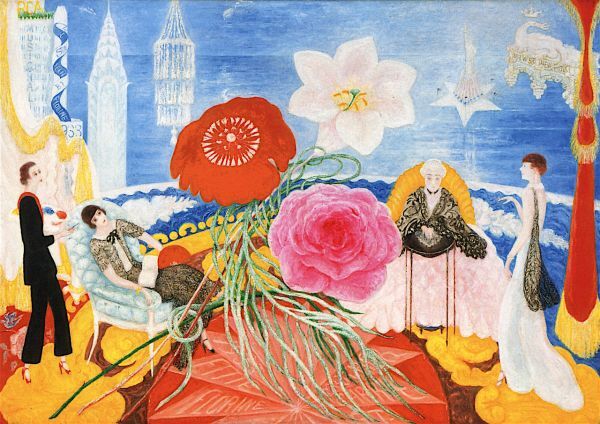 It’s significant that there’s not a man in sight in the composition. Instead, Stettheimer presents herself in her painting suit, which resembles menswear. But she doesn’t sacrifice her femininity by exploring her freedom to wear men’s clothes or assume traditionally male roles. The bright red high heels on her feet emphasize her view that she can be everything at once—a gender-fluid being and an independent woman.
One of Stettheimer’s poems underlines the power of her self-confidence, and her desire to rid the world of those men who were offended by her autonomy. “Occasionally,” she writes, “a human being saw my light, rushed in, got singed, got scared, rushed out, called fire. Or it happened that he tried to subdue it. Or it happened he tried to extinguish it.” Then later in the poem: “Out of courtesy, I turn on a soft, pink light, which is found modest, even charming. It is a protection against wear and tears. And when I am rid of The Always-to-be-Stranger, I turn on my light and become myself.”
This light shines bright in all of Stettheimer’s paintings, revealing the artist’s unbridled spirit—and her groundbreaking and liberated body of work.
Alexxa Gotthardt
Related Stories