Florian Meisenberg and Anna K.E. On Their “Double Selfie” Portrait of Florian Meisenberg and Anna K.E. courtesy of the artists.

Those with a keen eye on the resurgent hotbed of young artistic talent that is the Kunstakademie Düsseldorf are no doubt familiar with the works of
Anna K.E.
and
Florian Meisenberg
. Canvases and video pieces that riff on digital culture with wry wit have featured in Meisenberg’s recent solo outings at prestigious Kunsthalles—like those of Kassel and Düsseldorf—as well as the white cubes of Berlin’s Wentrup, Sao Paulo’s Mendes Wood, and London’s Kate MacGarry, among others. Both artists show with Simone Subal gallery on New York’s Lower East Side. There, as well as in recent shows at The Kitchen, Berlin’s Barbara Thumm, and Cologne’s Figge von Rosen, K.E.’s performance-based videos and sculptural installations have garnered critical and curatorial acclaim. Lesser known, however, is that the couple, who met in the Rhineland 10 years ago and now share a studio in New York, actively collaborate as well.
The most recent chapter of that collaboration spans Subal’s booth at LISTE this week and marks the first time the two artists will do so officially and under their own names. “This is the first project where we were consciously trying to have no overarching or initial concept in order to allow ourselves to collaborate beneath or in between our own art—to somehow allow our own art to merge directly into something else,” says Meisenberg as we sit in the couple’s sundrenched studio on the border of Brooklyn and Queens, two weeks before the fair. 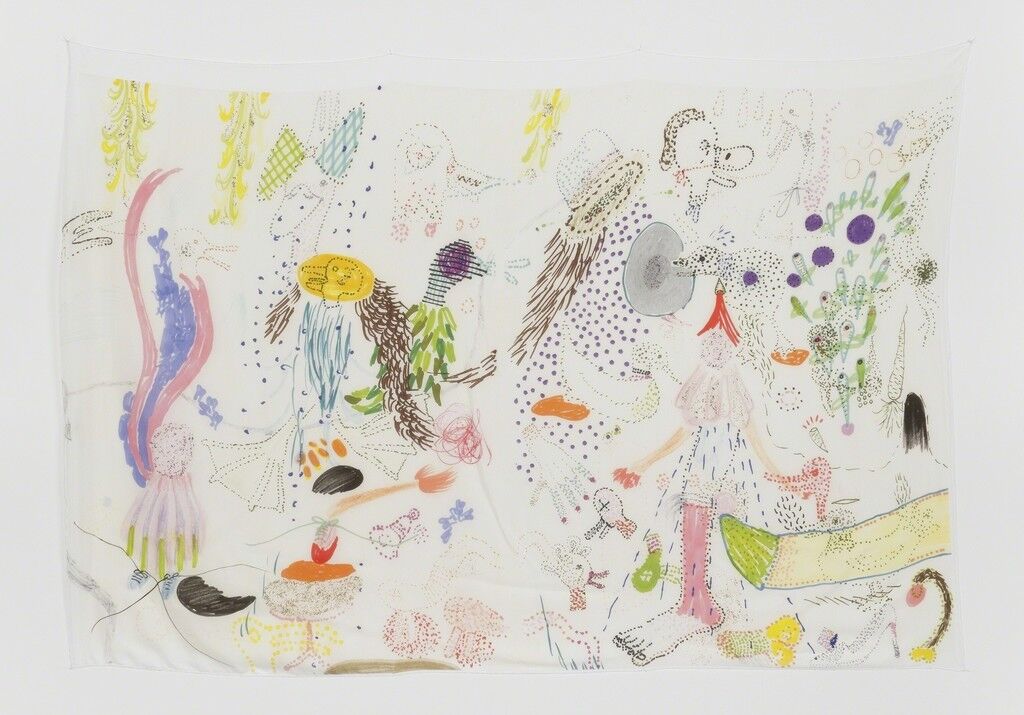 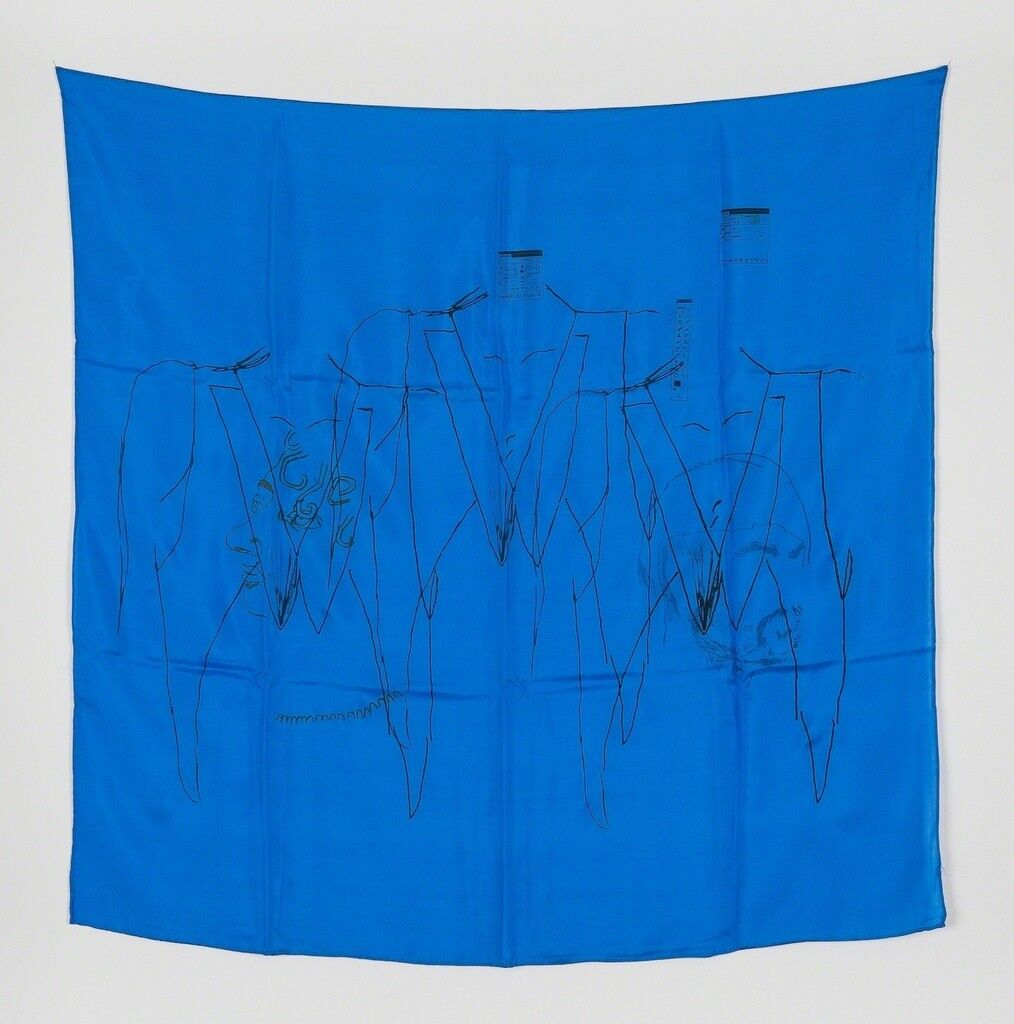 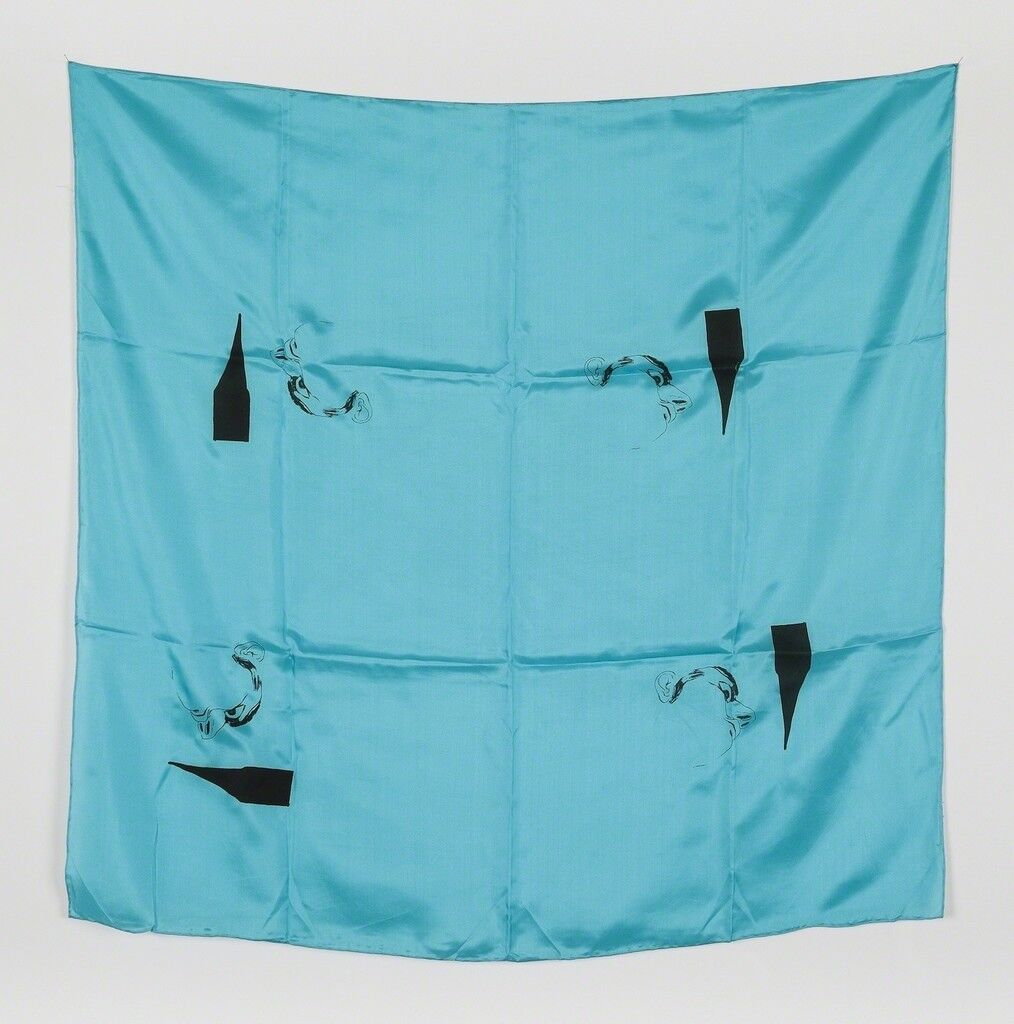 Anna K.E. & Florian Meisenberg
Late Checkout (scarf), 2015
Simone Subal
Previously, they worked together under the name of an invented dealer named Galerie Hasen. As K.E. recounts: “Our very first performance together was for a group show at an off-space that
Tal R
organized in the back room of a secondhand shop in Düsseldorf. We decided to bring a table, laptop, and a lot of printed materials from all the artists who were participating in the show, and to represent them.”
At LISTE, that element of institutional critique has transitioned from gallery to fair booth. Given free reign by Subal, K.E. says “the whole project was basically inspired by the space. It’s not really a booth. It’s more like a hallway,” open at both ends with two walls for the duo to utilize as they wish. “It’s a transitional situation,” Meisenberg adds. This state of in-between-ness—whether due to travel, technology, or a relationship so intense that a Venn diagram of a person comes to life—sits at the center of the works on view. Three videos shot in hotel rooms over the last five months are situated on poles throughout the hallway. The walls are covered in sheets of varying types and thread counts, arranged messily as if someone has just taken a vertical nap in them. There are also sketches that the pair have made in exquisite-corpse fashion on Florian’s phone while riding the subway, which have now been painted by hand and airbrushed in India ink. 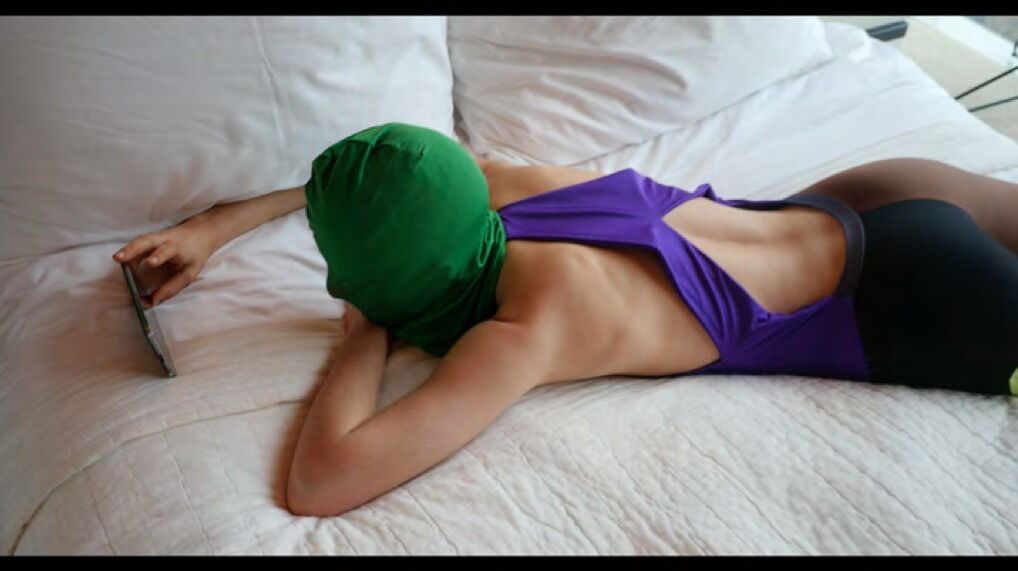 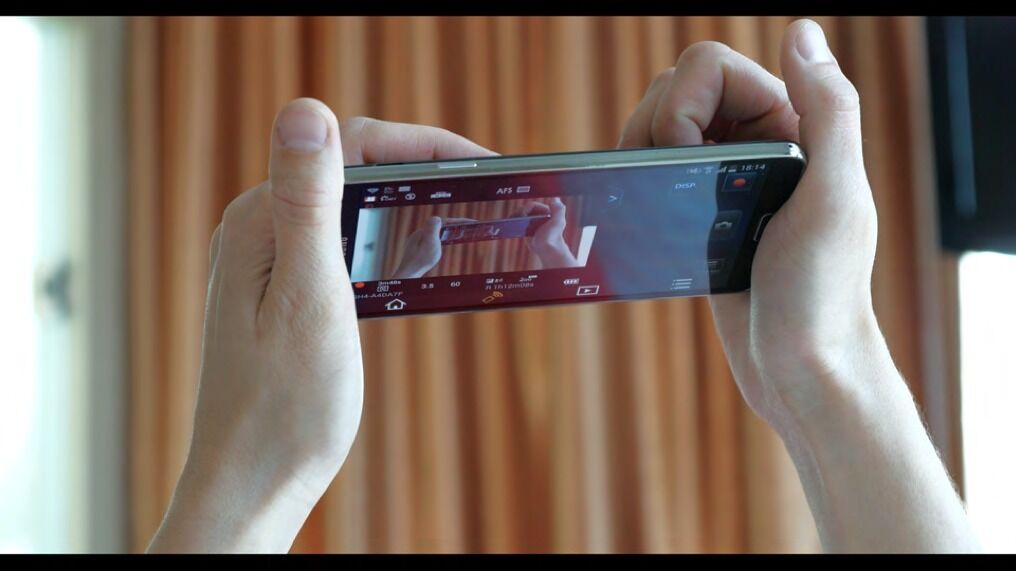 Anna K.E. & Florian Meisenberg
Late Checkout (2), 2015
Simone Subal
The three videos are the first in a planned series of six, so determined by the number of swimsuits K.E. created for her show at The Kitchen, one of which she wears in each. In them, we see her circulate through the hotel rooms in a balletic yet somewhat alien manner, mounting a mini bar or table for a series of poses, all while holding—and looking vigilantly at—a smartphone. Meisenberg is behind the camera and can sometimes be seen in the rooms’ mirrors, always sporting a gray T-shirt that reads, “This image is not available in your country.” As it happens, K.E.’s eyes aren’t glued to her Facebook or Instagram feed but to a stream of what her partner (and now the viewer) sees through the camera lens.
“It’s this kind of near-invisible link, which we feel always because we are so close but which now also now appears in real life via this double screen. Suddenly, we are able to see the same thing,” explains Meisenberg. “This invisible collaboration or invisible choreography is, for us, a really beautiful reflection of the contemporary condition we are all in,” he adds, pointing to the pieces’ extreme take on how we define and understand ourselves through various internet platforms. The process of filming itself also acted as a performance of this condition. “We always chose hotels with big windows and without other architecture surrounding them so that we are also inside another kind of screen,” Meisenberg says. 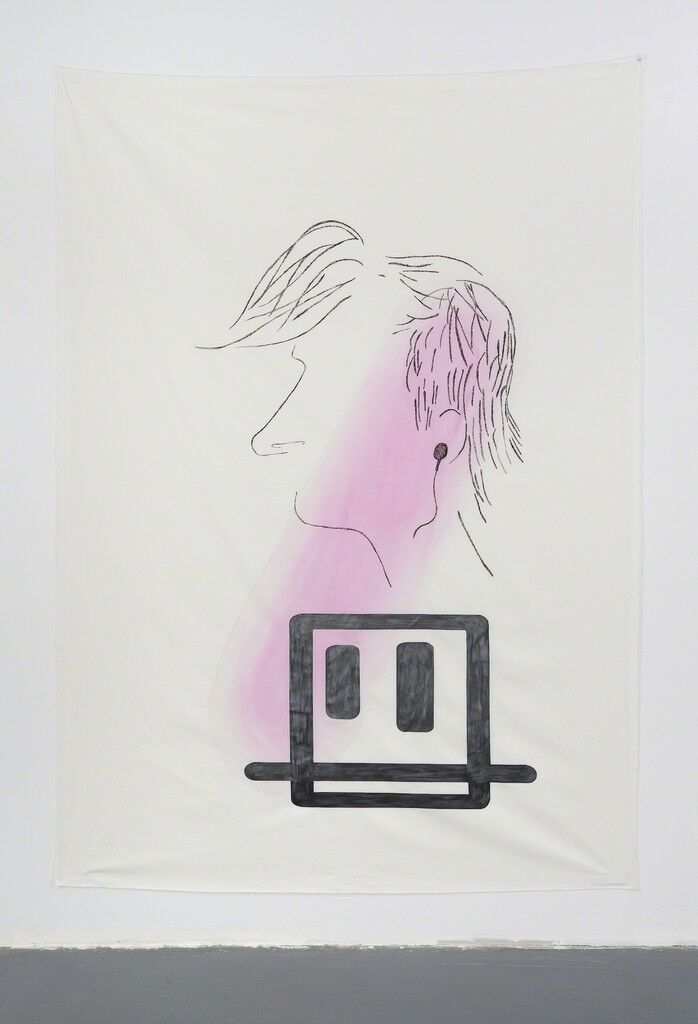 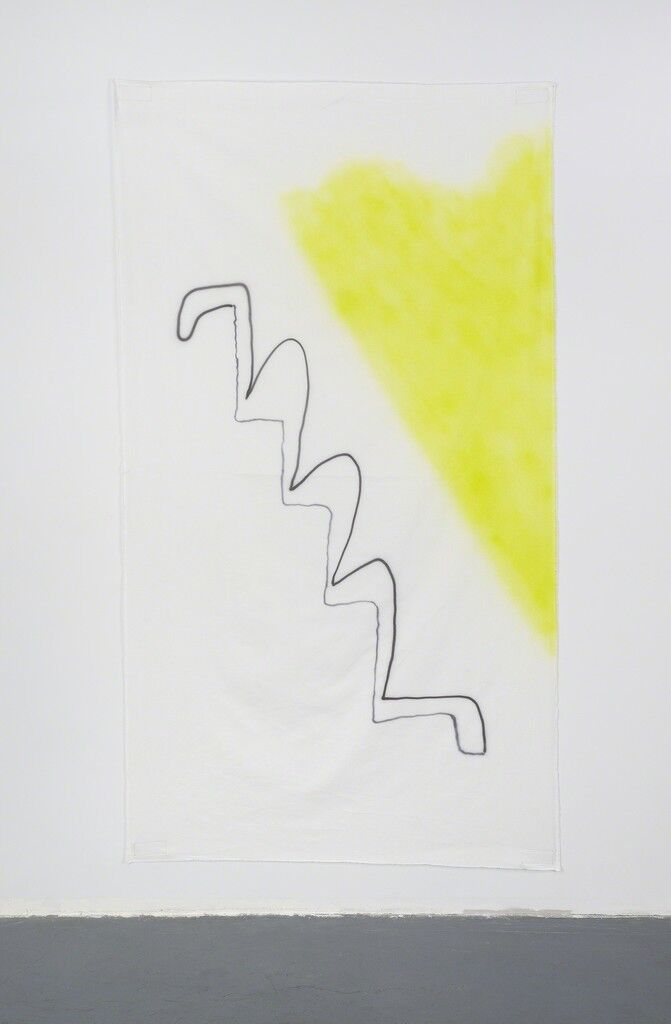 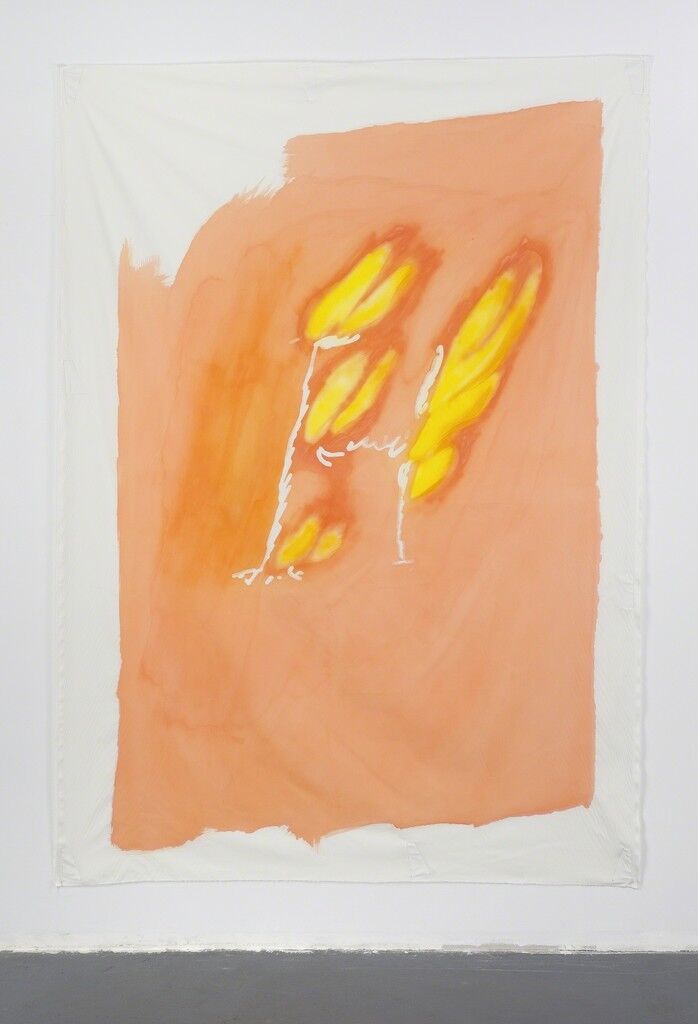 Anna K.E. & Florian Meisenberg
Late Checkout (burning man), 2015
Simone Subal
Refreshingly, Meisenberg and K.E.’s contributions seek only to reflect real conditions. But instead of striving for one-to-one depictions of reality, the artists create slightly humorous, awkward, and expressly non-confrontational ones that have a lot more to offer. This strategy was reflected in the gender dynamics at play in the videos, which, contrary to how they initially appear, are no “male-gaze redux.” Rather than trying to correct or overturn previous power dynamics, the couple portrays “a new generation’s mindset of being on one horizon, where everything happens with a certain fluidity,” K.E. says.
“Even though I keep the camera, Anna is not only reacting to my triggers, but she is simultaneously triggering or changing how I react and how I follow her,” Meisenberg adds. “It’s sort of a double selfie. We become voyeurs of ourselves, watching in real time.” The voyeurism is pretty vanilla and somewhat repetitive across the three screens. But that, too, is a reflection of the same-ifying nature of an increasing portion of the internet. In the artwork, “there’s no real love or no real touch. It’s like everything is kind of behind a condom or something that covers the whole emotion,” K.E. suggests. “Maybe it’s a new kind of future.” Is it one you want?
Alexander Forbes is Artsy’s Consumer Marketplace Strategist. He was previously the Executive Editor of Artsy Editorial.
Explore LISTE 2015 on Artsy.
Related Stories