The Forgotten Female Abstract Expressionist Who Was Tracked by the FBI 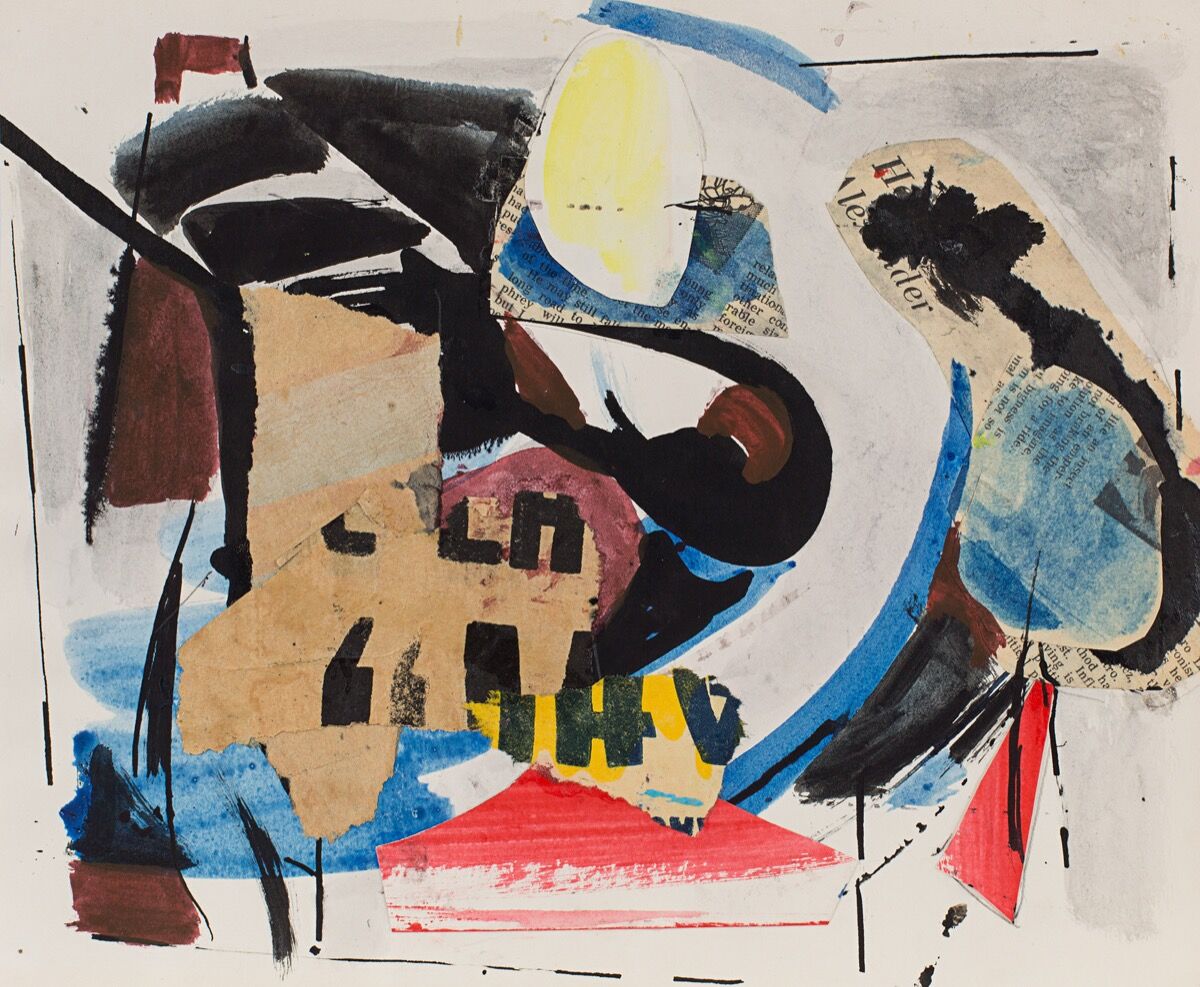 In New York in the 1930s, a young
Beatrice Mandelman
rubbed shoulders with the likes of
Jackson Pollock
,
Willem de Kooning
, and
Arshile Gorky
. By the early 1940s, her paintings had appeared at the Museum of Modern Art in New York, the Art Institute of Chicago, and the National Gallery of Art in Washington, D.C.
And then, one day in 1944, Mandelman and her painter-husband
Louis Ribak
packed up and moved to New Mexico. In Taos, where they eventually settled, there were no art galleries; it would be two years before one opened its doors. Marianne Rosenberg, whose Upper East Side gallery Rosenberg & Co. has organized a new show of Mandelman’s work, says Taos was, “at that point, essentially a hole in the wall inhabited only by
Agnes Martin
.” The couple’s rented adobe house didn’t even have indoor plumbing.
It was about as far from the New York art world as one could get—and Mandelman and Ribak embraced it wholeheartedly. Although they were painters in the social realist tradition before moving to Taos, the change of scenery inspired a slow but significant transformation in their art. During her first years in New Mexico, Mandelman began to paint semi-abstract landscapes and Native American ceremonies. But, following a trip to Paris in 1948 to study with
Fernand Léger
(where she also became close with avant-garde artist
Francis Picabia
), her work moved even further towards abstraction. As Mandelman and, eventually, Ribak adopted the trappings of European Modernism, they became the de facto leaders of a group of artists known as the Taos Moderns. 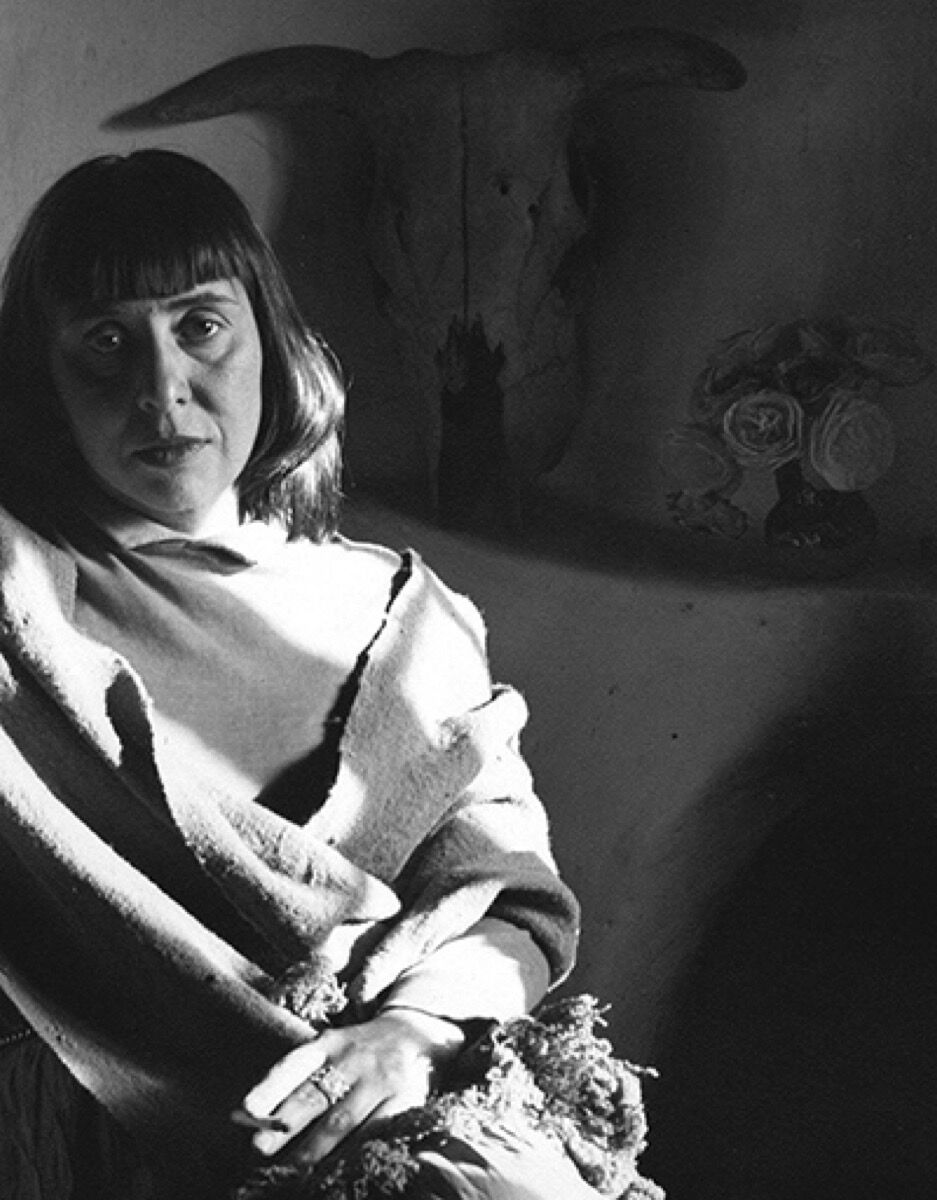 This was not the first artist collective to call the New Mexican city home. The Taos Society of Artists was founded in 1915, which gave a formal name to the enclave of painters who had been slowly trickling into the area since the late 1800s. Their work was resolutely figurative, frequently featuring Native Americans in traditional dress or Southwestern landscapes. Many of these artists—including
Ernest Blumenschein
and
Leon Gaspard
—still resided in the town, although their influence had faded during the onset of the Great Depression.
Mandelman and Ribak represented a second wave of artists that would breathe new life into Taos’s artistic reputation. The most famous of the group was
Agnes Martin
, with whom Mandelman would become good friends. Martin, who rarely spoke with anyone else in town, would visit the couple’s home almost every evening and talk with them late into the night. In total, some two dozen artists would move to Taos in the 1940s and ’50s, including
Edward Corbett
, Louise Canthiers,
John De Puy
,
Oli Sihvonen
, Clay Spohn,
Earl Stroh
, and
Cady Wells
, among others. Some were lured by the Taos Valley Art School, which Ribak and Mandelman established in 1947. “There were a few secondary players that came in and out of the scene, but they were clearly the center of that little universe,” notes Rosenberg.
Although Taos’s star may have burned bright—historian David L. Witt noted that “outside of New York and San Francisco in the early 1950s, there was probably more interesting Modern art going on in Taos than anywhere else in the country”—it also burned fast. Martin returned to New York in 1957; and by the mid-1960s, most of the original Taos Moderns had left town. Mandelman and Ribak, however, would remain there for the rest of their lives. 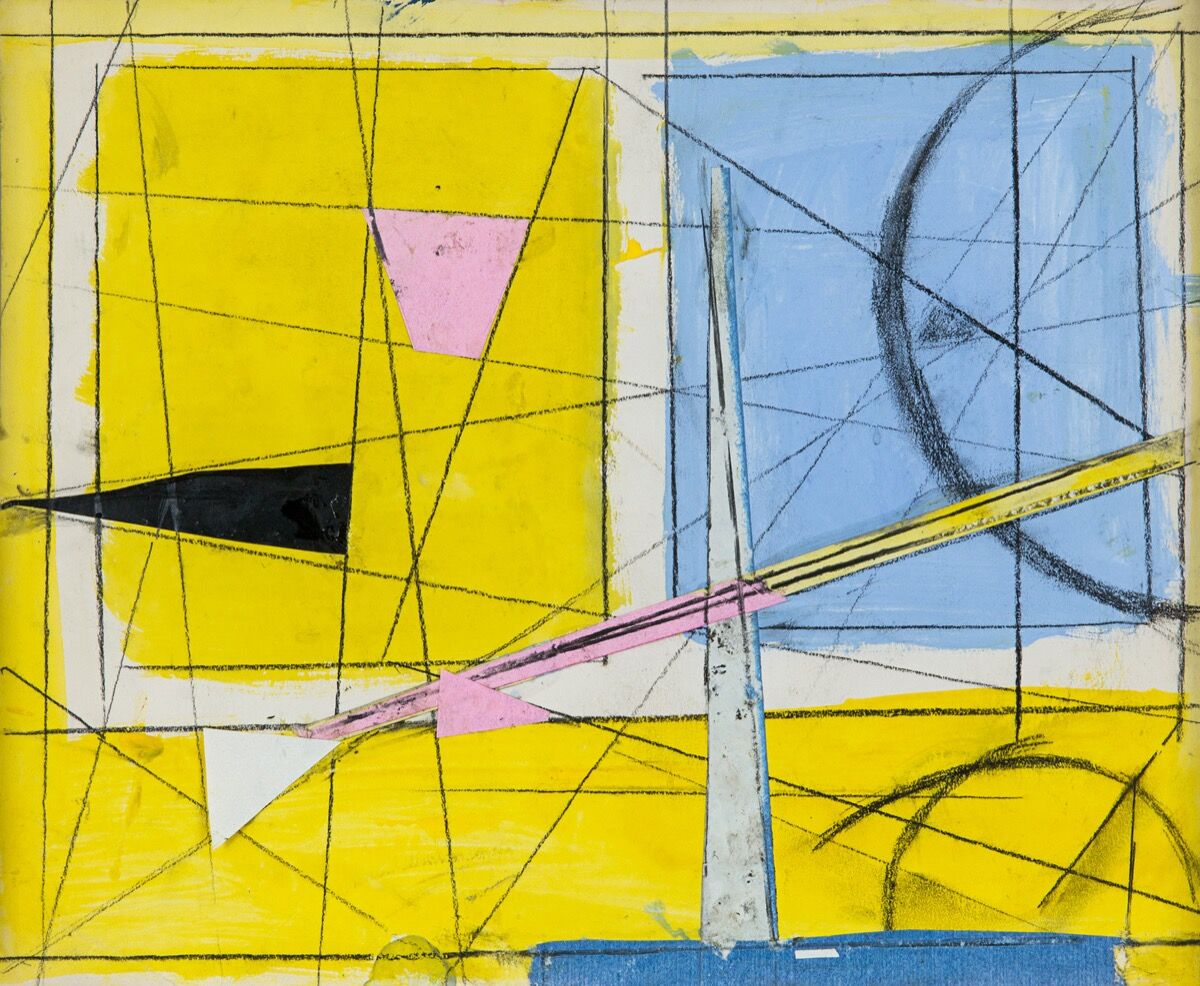 Advertisement
Some have attributed the decision to Ribak’s severe asthma, which improved dramatically in the dry New Mexican air. But further research into the couple’s history has led to another, more startling, hypothesis: They wanted to avoid harassment by the FBI. Both Ribak and Mandelman “were really very leftist,” explains Rosenberg, “and we now know that they were considered at the time to be so-called ‘fellow travelers,’ or communist sympathizers. They were being tracked by the FBI. I think this little world of Taos was a real refuge for them, where they felt safe, away from all of that intrusion.”
In fact, the FBI may have been the reason behind the couple’s hasty departure from New York City in the first place. As government documents show, just a few weeks after Ribak and Mendelman left NYC for New Mexico, their apartment was ransacked by FBI agents. And that wasn’t the end of it—several years later, a government informant enrolled in their Taos Valley Art School. In total, the FBI spent thousands of dollars and more than 20 years spying on the artists.
While these discoveries suggest their move was more politically than artistically motivated, it’s impossible to deny the effect it had on Mandelman’s post-1944 work. She began an experimentation with color and form that finally began to coalesce in the 1960s. “She had really matured her abstract art into something that was highly sophisticated and well thought-out,” Rosenberg says. “She wasn’t trying things out anymore. She had found her path, so it is a very complete thought process that she offers us.” 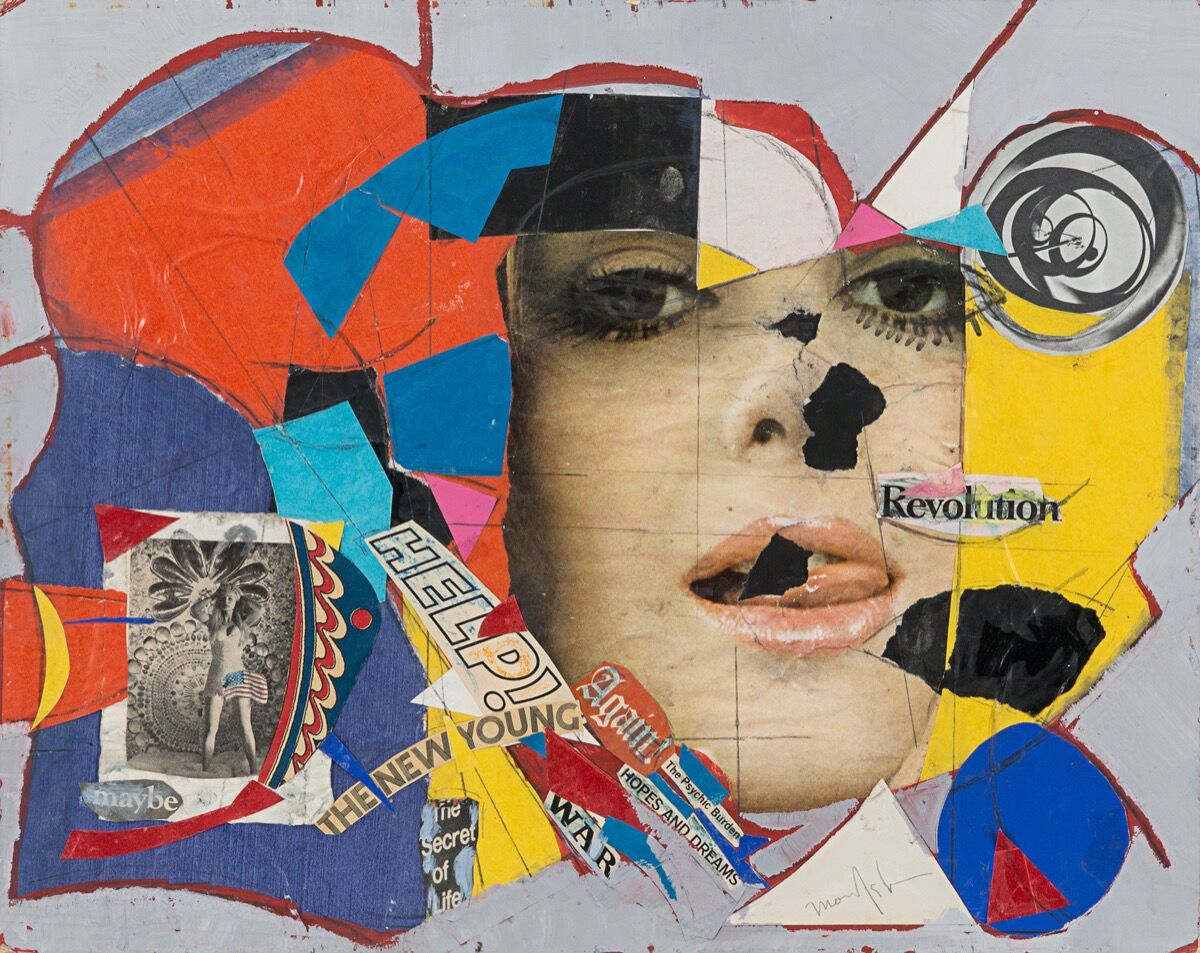 This decade is the focus of Rosenberg & Co.’s exhibition, “Beatrice Mandelman and the Sixties,” which opens January 18th. The works on display reveal the strong influences of
Matisse
’s cut-outs and
Braque
’s Cubist collages, albeit with a color palette born of the bright desert sunlight. Unique to this decade are a series of politically explicit collages, with images of Twiggy and Black Panthers that speak to the turbulent social climate and harken back to Mandelman’s social realist past. “There’s some real sort of explosive force in what she’s working with at the time,” Rosenberg notes. “And also a real exuberance of color. There’s a confidence in the color and the expression and the melding of color that I think is a real phenomenon of the sixties.”
Mandelman and Ribak were prolific artists, leaving behind exactly 5,532 works in their combined estates. Mandelman out-produced her husband, according to Rosenberg, painting furiously until her final days. She said repeatedly that she wanted a last chance at national recognition, and rebounded from cancer several times during the last decade of her life. Finally, in May 1998, a feature in Forbes magazine lauded her as one of the most significant living Modernists. She’d made it. Seven weeks later, at the age of 85, Mandelman died.
—Abigail Cain
Related Stories