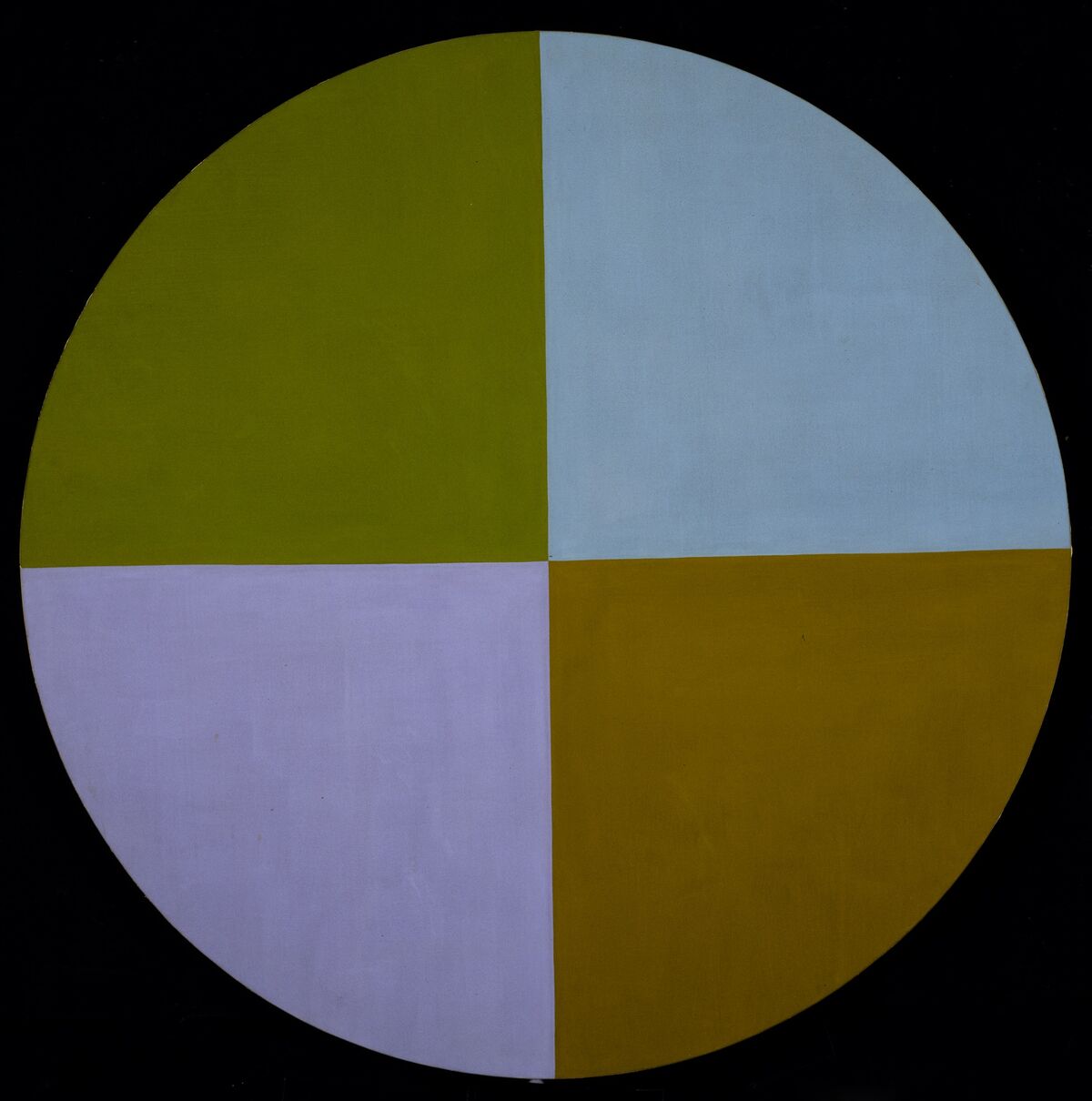 Mary Pinchot Meyer’s Cold War ties, family tragedies, high-profile affairs, and untimely death eclipse the story of her artistic development. Her gruesome murder in 1964, when Meyer was 43, has become a source of conspiracy theories, with some followers alleging CIA involvement. The results of this intrigue have obscured her artistic practice, and it’s difficult to find pictures of her work online. Even Meyer’s biographer, Nina Burleigh, omitted images of the painter’s blocky, colorful canvases from the 1998 book A Very Private Woman: The Life and Unsolved Murder of Presidential Mistress Mary Meyer. Instead, readers are left with only capsule descriptions of Meyers’s individual paintings and an overarching view of her aesthetic principles.
“She painted one large circle with four hues of deep red, each one almost imperceptibly different from the other. In many of her canvases, she favored blues. Still within the formal
color field
style, she experimented with non geometric, curving yin and yang shapes,” Burleigh writes, leaving the success or failures of Meyer’s work to the reader’s imagination. The absence of the paintings’ titles in this description precludes any hint at the artist’s intent.
Burleigh argues that the work Meyer had made up until her death was less mature and accomplished than that of many of her male peers. The dearth of her works are not on view in public collections, and without reproductions available, that may have been true. Ultimately, Meyer’s story is a cautionary tale about what happens to a female artist’s legacy when her life and death are subsumed by tabloid fodder and national intrigue.
From the beginning, Meyer seemed bound to live a charmed life. She was born Mary Pinchot, in 1920, to aristocrats Amos and Ruth Pinchot. Her youth at Grey Towers—a grand estate in Milford, Pennsylvania—and in a Park Avenue apartment included horseback riding, debutante balls, and a tony education at the Upper East Side’s Brearley School.
During Meyer’s senior year at Brearley, her sister Rosamund committed suicide. “Rosamund’s suicide broke [their father] Amos,” Burleigh writes. “She had been his favorite child.” He succumbed to alcoholism and depression, and died of pneumonia in 1944. Clearly a Freudian, Burleigh contends that throughout her subject’s life, Meyer gravitated toward powerful men with whom Meyer recreated her relationship with her father.
Throughout high school and college, fellow classmates described Meyer as charismatic and popular. After she graduated from Vassar College, Meyer enjoyed some professional success as a reporter for Mademoiselle magazine and an editor for the Atlantic Monthly. Her career ambitions, however, became secondary once she married Cord Meyer—an ambitious Yale graduate, decorated World War II veteran, and writer. 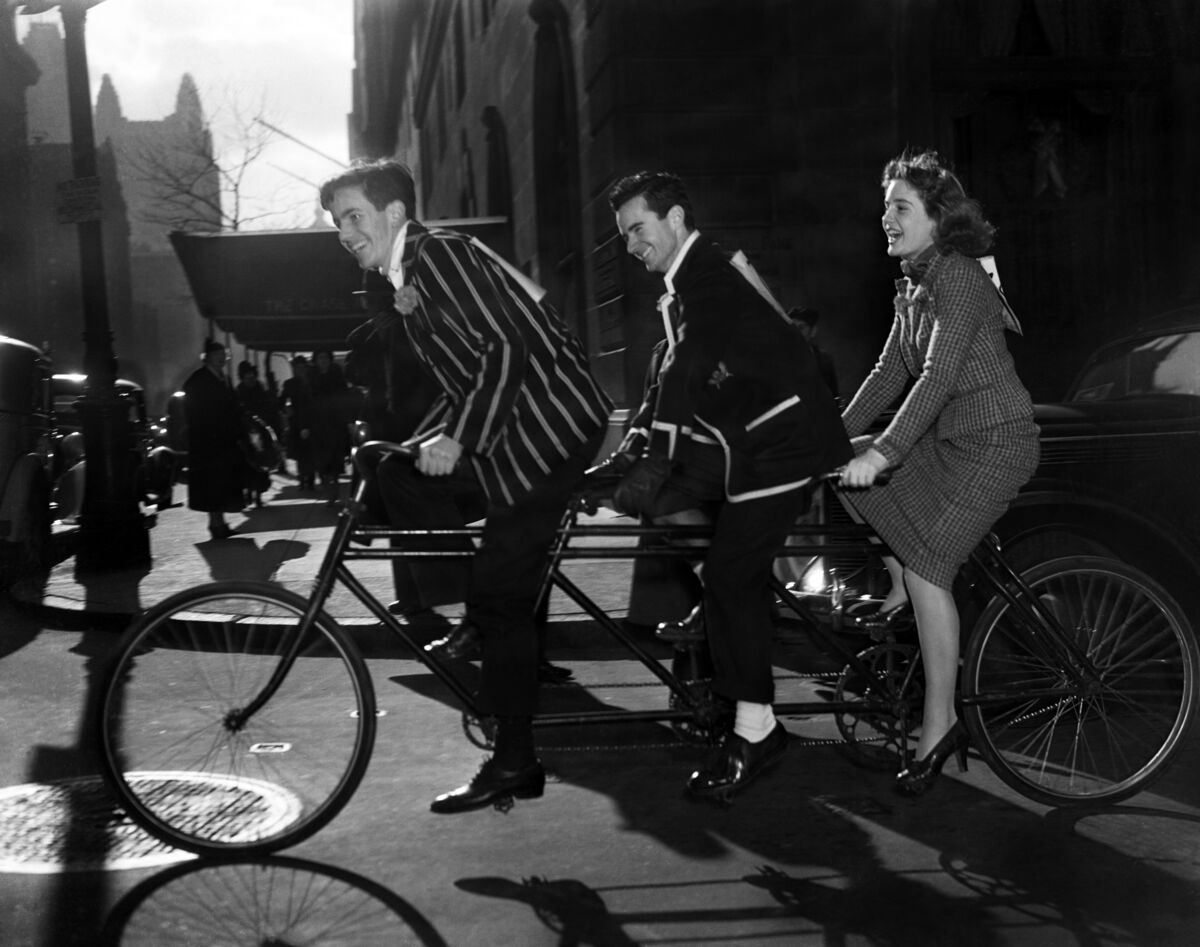 Roger Schafer, Anthony Duke, and Mary Pinchot (front to back) as they head to Central Park, New York City, to take part in the third annual bicycle breakfast and ride of socialites, held for the benefit of the Children' Welfare Federation, 1937. Courtesy of Bettmann/Getty Images.

The couple had three sons, and Mary devoted her life to her home and family. Cord frequently traveled to give political speeches, and the housekeeping fell to Mary. When the pair moved to Cambridge, Massachusetts, in 1949, she found a new creative outlet: painting. Meyer took classes at the Cambridge School of Design, but the pressures of motherhood were particularly pronounced throughout the post-war era. “The time she could spare,” Burleigh writes, “was always contingent upon the children’s needs; guilt was a monster at the door of any mother following a muse into solitary work at the beginning of the baby boom.”
Two years later, Cord was hired by a new organization called the Central Intelligence Agency. Along with his cohort of “Cold Warriors” in the nascent CIA, Cord played a role in assassination attempts on foreign leaders suspected of Communist aims, infiltrating cultural organizations to curb leftist agendas, wiretapping civilians, and experimenting with LSD on unsuspecting subjects.
The Meyers moved to McLean, Virginia, in the early 1950s for Cord’s job. Mary wasn’t entirely oblivious to her husband’s occupation—even if she didn’t know all the details of his day-to-day. His macho, withholding position created tension between them. As she continued with her painting and as Cord became more immersed in the CIA, their lives began to diverge. “Cord lived in the world of James Bond and Hemingway,” Burleigh explains. “Mary admired the work of artist
Helen Frankenthaler
and had a casual artist’s style in dress and manner.” Cord supported his wife’s painting, though she had little time for her work. Just before Christmas in 1956, the Meyers’s middle son, Michael, died while crossing the street in front of their home. The tragedy created even more distance between the pair. Two years later, Mary filed for divorce.
After their separation, Meyer maintained her own prominent social network in Georgetown. One of her closest friends was sculptor
Anne Truitt
, with whom she eventually shared a studio, and Truitt’s husband, the journalist James Truitt. Meyer’s sister, Tony, married Ben Bradlee, who became the star executive editor of the Washington Post. Artists Robert Gates, Mary Orwen, and Lothar Brabansky also entered Meyer’s orbit. Then–Massachusetts senator John Kennedy and his wife, Jackie, were neighbors and friends.
Meyer began painting more seriously as she also embarked on a series of affairs. She began a romance with painter
Kenneth Noland
while volunteering at the Jefferson Place Gallery in Washington, D.C. Over the course of their relationship, Meyer adapted his style of
abstract painting
, though Noland didn’t take her work particularly seriously. In her writing on this chapter in Meyer’s life, Burleigh makes an interesting—if dubious—connection between the work of the
Washington Color School
artists and the CIA spies that surrounded them: both, she writes, “communicated in a secret language comprehensible to others in their group but cryptic to outsiders.”
Noland and Meyer began going to Reichian therapy, which was intended to help patients relinquish their inhibitions and embrace sexual openness. (Meyer later experimented with LSD and took regular trips to see acid guru Timothy Leary.) Burleigh partially attributes Noland’s signature style—concentric circles in vivid colors—to the couple’s passionate relationship. “They have the almost physical effect of sucking the viewer into a small, intensely warm even ecstatic space,” she writes, noting such titles as Heat, Plunge, Split, and Luster. “The splattered edges and the choice and arrangement of colors with their throbbing centers are much more overtly sensual” than the cleaner, crisper lines Noland used after the pair’s break-up in the late 1950s. Meyer, in other words, was a valuable muse. 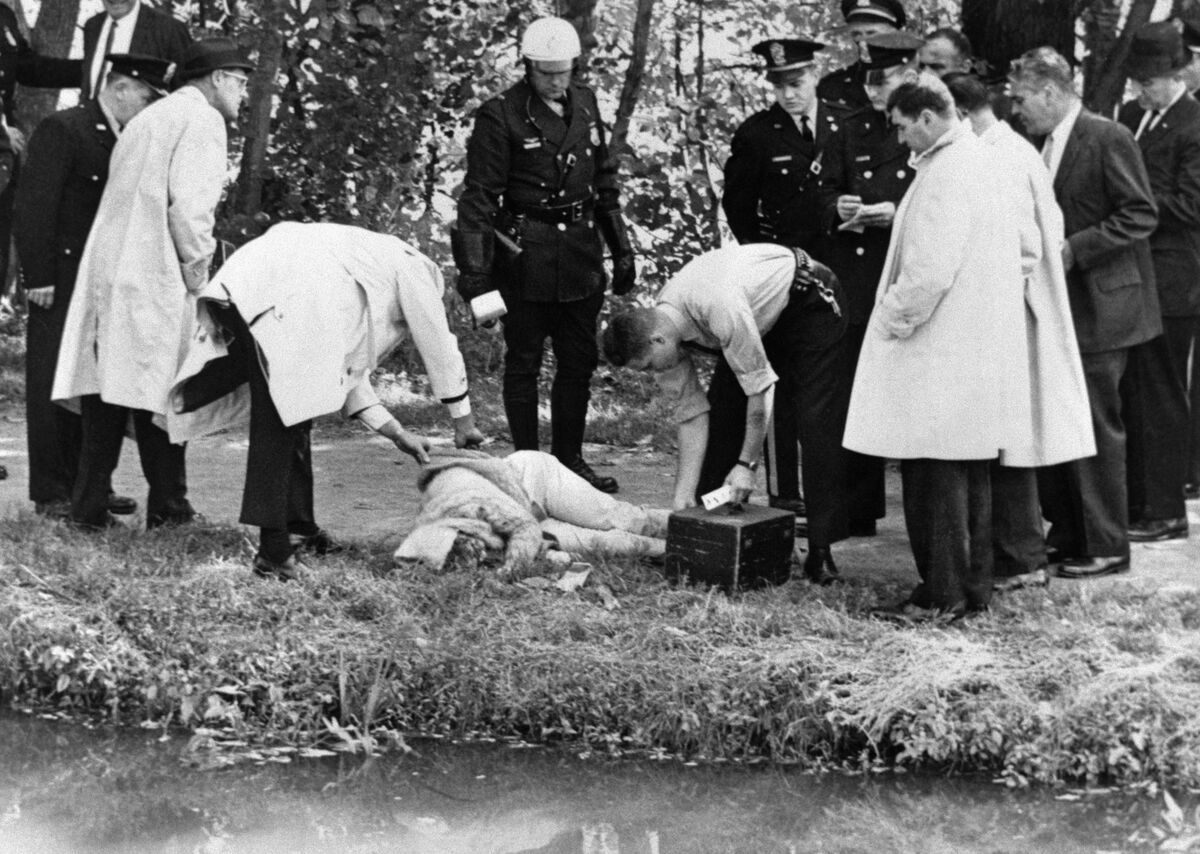 Police officers and detectives examine the body of Mary Pinchot Meyer who was found shot to death, Washington D.C., 1964. Courtesy of Bettmann/Getty Images.

Advertisement
In the early 1960s, Meyer’s relationship with Kennedy escalated from friendship to romance. The White House log books trace her visits to the president between 1961 and 1963—most while Jackie was out of town. Otherwise, there’s not much documentation about the affair. There’s little evidence that Meyer wielded much influence over Kennedy, though she influenced at least one brouhaha in conservative Washington.
In 1963, the city’s Gallery of Modern Art was considering taking down
Tom Wesselmann
’s Great American Nude No. 44 (1963), a large-scale depiction of a naked blonde woman. Meyer told Kennedy about the conflict and, according to Burleigh, “the president laughed at the story and told Mary to tell the little Gallery of Modern Art that he wanted the Wesselmann to hang. The collage stayed in the show.”
Meanwhile, Kennedy was enmeshed in another affair with mob affiliate Judith Campbell and was wrapped up in anti-Communist plans with uncertain ties to the CIA, which culminated in the Cuban missile crisis. When Kennedy was assassinated in 1963, these sinister connections offered plenty of speculative fodder for conspiracy theorists. Meyer’s connection to both the president and the CIA would eventually turn her own suspicious death into a similar public guessing game.
In October 1964, Meyer was walking on a towpath by the Potomac River near her Georgetown studio when an attacker shot her twice. The police arrested D.C. resident Ray Crump, who was identified by eyewitnesses. Yet his counsel, Dovey Roundtree, established reasonable doubt that he was not the murderer (the deliberations centered on the height of the accused—an eyewitness remembered him as larger than he actually was). Crump went free, only to commit a series of violent crimes over the next few decades.
Meyer’s seemingly random, irrational murder—which occurred just after the Warren Commission issued a report on Kennedy’s death—incited rumors and whispers throughout Washington. Some asserted that mysterious agents had lured Crump to the towpath where he shot Meyer. Others were certain that the CIA was responsible for her death.
Enhancing these suspicions was the fact that Meyer’s diary disappeared shortly after her murder. Anne Truitt, Ben and Tony Bradlee, and CIA counterintelligence chief Jim Angleton (a friend of Meyer’s family) alleged that they removed the diary from Meyer’s studio and had it burned. Some believe Meyer’s writing is still out there and that it contains incriminating evidence.
In the last few years of her life, Meyer kept painting regularly, if showing rarely. Burleigh notes that throughout the 1970s and ’80s, Meyer’s friend Truitt “carved out a place for herself as a minor artist whose work is exhibited occasionally and purchased by a few small regional museums.” (A significant understatement—Truitt is now regarded as a seminal
Minimalist
sculptor.) If Meyer hadn’t been killed, it’s likely her own work would have eventually gotten its due.
One moral of Meyer’s tale might be that if you want to be a working artist, don’t move to Washington, D.C. She became embroiled in a political milieu that found artists (female artists, in particular) charming companions, but hardly took them seriously. Among the company Meyer was keeping—which was determining whether to enter a nuclear war with the Soviet Union, covertly inciting the murders of Latin American dictators, and investigating mind control—how could the act of painting seem anything but quaint? If Meyer had stayed away from the espionage community and the White House, perhaps she would have had a few more decades to make art—but as a female artist in the conservative, macho atmosphere of 1960s Washington, D.C., there was no guarantee that her work would secure her legacy. Instead, her notoriety came from her death.
Alina Cohen
Related Stories

The CIA Agent Who Became a Visionary Art Collector

The Architects Reconstructing Crime Scenes No One Else Can 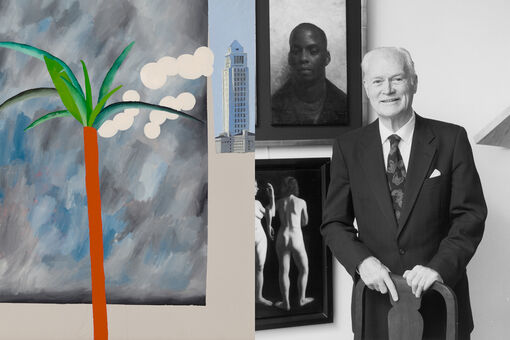 The Architects Reconstructing Crime Scenes No One Else Can
Rob Goyanes
Nov 9, 2017 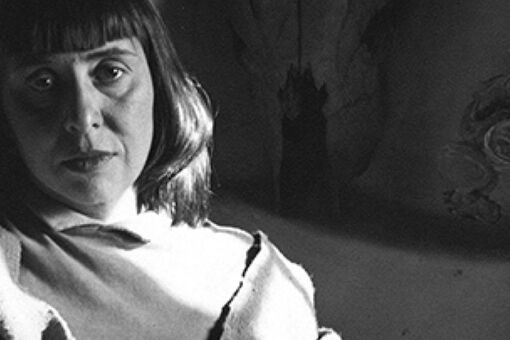 The Forgotten Female Abstract Expressionist Who Was Tracked by the FBI
Artsy Editors
Jan 17, 2017