The Forgotten Female Patron Who Brought Impressionism to Chicago 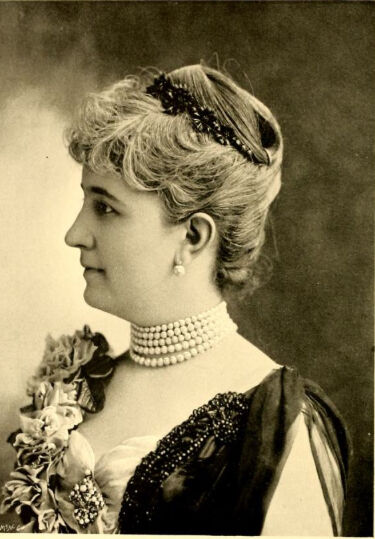 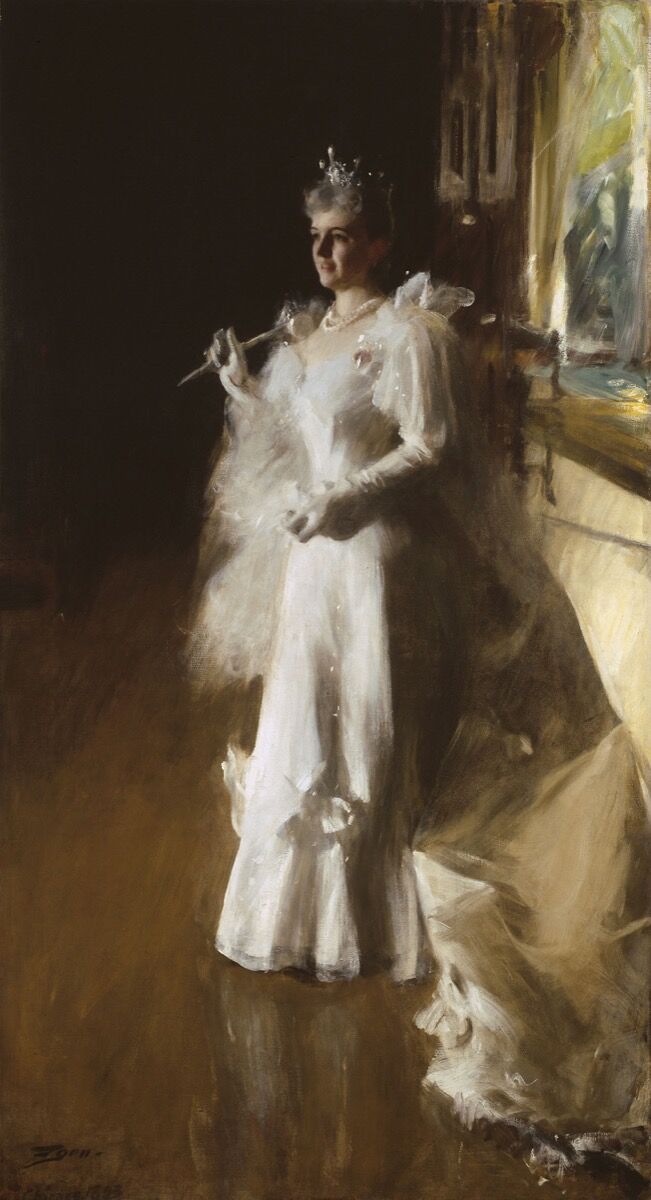 Impressionist art
looks irrefutably appealing today. Given the movement’s beautiful landscapes, lush color palettes, and delicate brushwork, it’s not surprising that one exemplar—a haystack painting by
Claude Monet
—recently sold for $110.7 million. Yet Impressionism was once a radical departure from realist, academic painting. In 1874, artists such as Monet,
Edgar Degas
, and
Camille Pissarro
abandoned the annual Parisian salons, which formalized European artists’ ranks, to organize their own exhibitions. Even Monet’s soft, light-filled canvases took years to catch on. Once they did, in the late 1880s, they helped pave the way for the modernist avant-garde and its fractured picture planes to dominate European art in the early 1900s.
In the late 19th century, however, one woman from Chicago, Bertha Honoré Palmer, made a bold move for her time to become a champion and major collector of Impressionist art. “Few American women, if any, have in modern days appeared in the public eye in as distinctive a way as Mrs. Palmer,” read an obituary in a 1918 issue of the Journal of the Illinois State Historical Society. Before women even gained suffrage in the United States (in 1920), Palmer asserted her power through business dealings and art acquisitions. Her patronage ensured that Chicago became an essential city for viewing Impressionist masterpieces—second only, perhaps, to Paris.

From Louisville to Lake Michigan 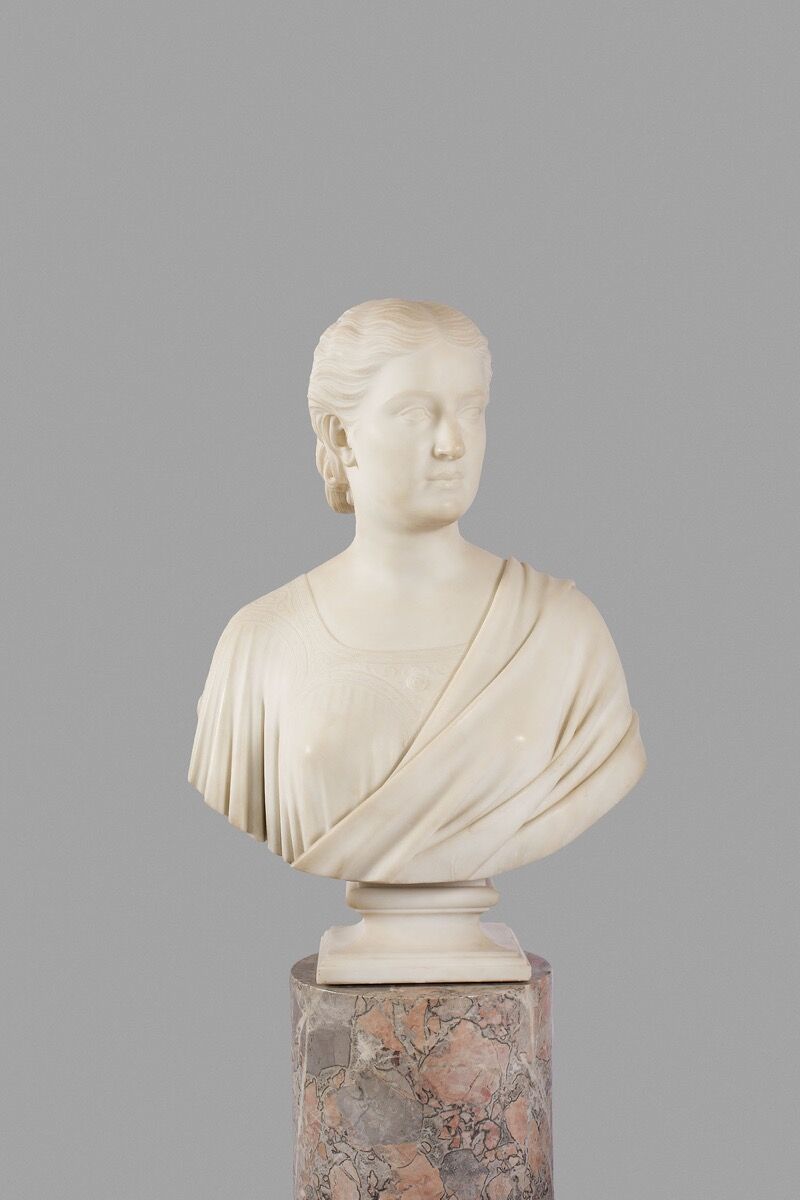 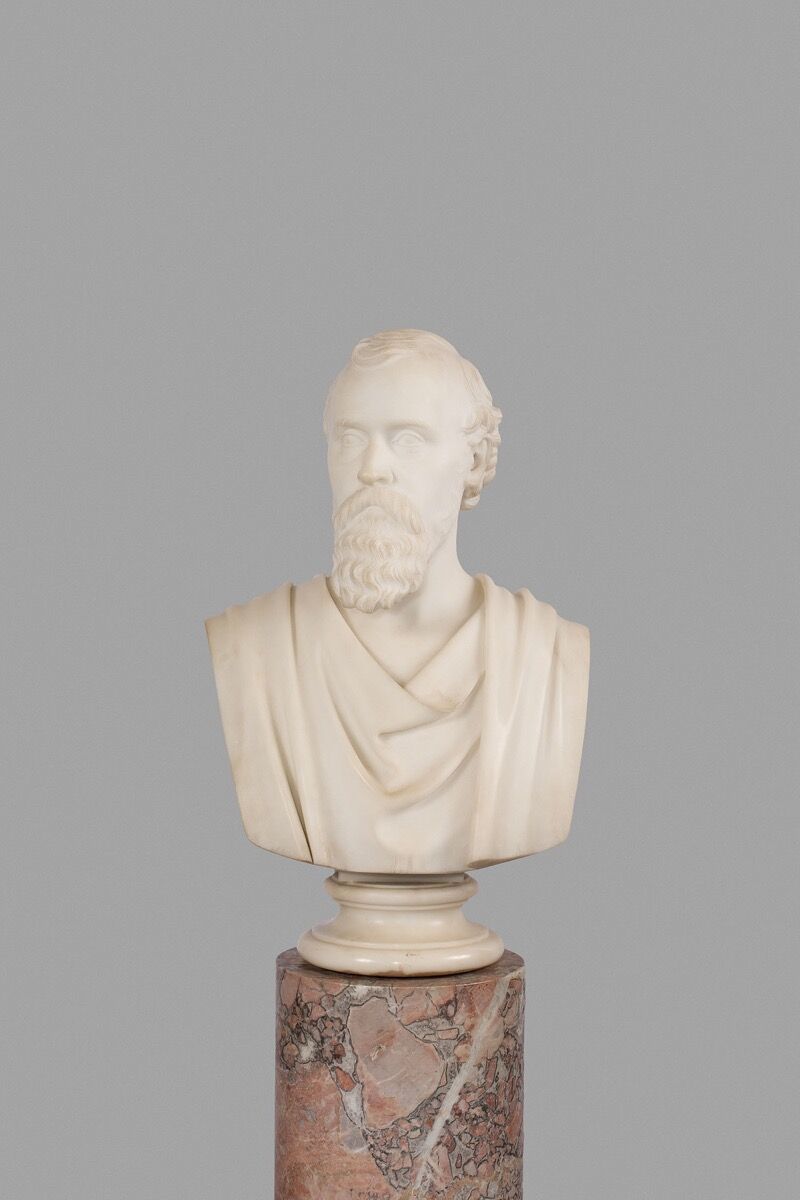 Born in Kentucky in 1850, Palmer followed the traditional aristocratic rituals of the 19th century American elite. Her father, Henry Hamilton Honoré, who did business in Chicago, made a canny social move by “debuting” his daughter as an eligible bachelorette in the Windy City, instead of in Louisville. Her 1871 marriage to the wealthy Chicago businessman and hotelier Potter Palmer offered her more opportunities than a life in the sleepy South.
Early in her marriage, Palmer displayed a commitment to the arts. She became a founding member of the Chicago Society of Decorative Art (later known as the Antiquarian Society of the Art Institute) in 1877, which helped impoverished women gain skills as artisans. The group sponsored education, teacher training, and, eventually, the development of the decorative arts collection at the Art Institute of Chicago. The group is still extant today, bringing the foremost scholars in the field to the city.
In the early 1880s, the Palmers started construction on a new home on Lake Shore Drive that approximated the extravagant style of a European castle. Mrs. Palmer made it a destination for the Chicago aristocracy, throwing an annual New Year’s bash that was a must-attend on the city’s social calendar. An 1889 introduction to Paul Durand-Ruel, the most important dealer of Impressionist art at the time, laid the groundwork for her art education and purchases. Later that year, she bought her first Impressionist work for $500—Edgar Degas’s pastel On the Stage (1876–77), which features sprightly ballerinas in costumes represented by baby blue and delicate pink blurs. The Palmers eventually built an addition onto their home that served as a gallery for their art collection. 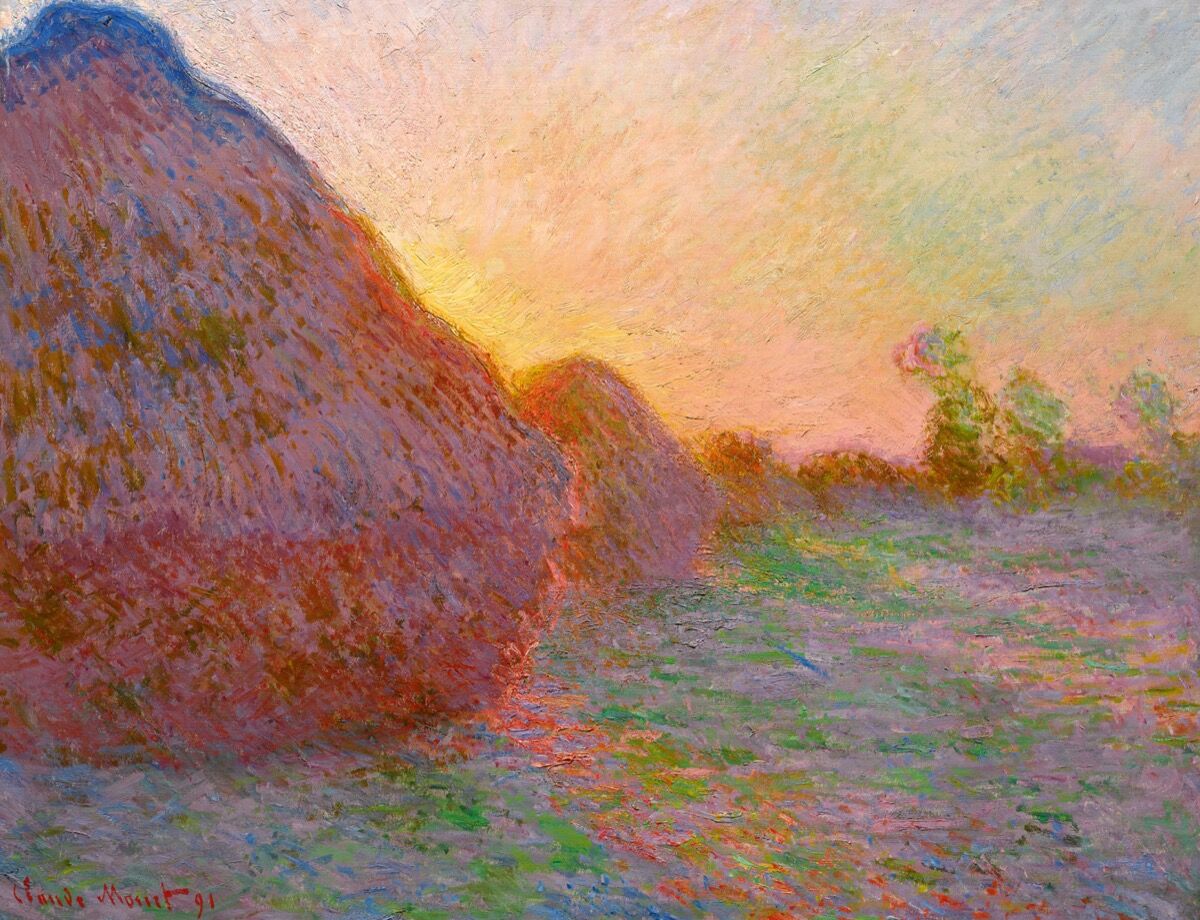 Advertisement
Palmer got her major break as a cultural steward in 1890, when her peers elected her president of the Board of Lady Managers for the forthcoming World’s Columbian Exposition of 1893. For the event, she directed a chef to develop a brand-new “ladies dessert” that would be less messy than pie—and thus, the brownie was born. Palmer began traveling to Europe, meeting artists, looking at paintings and sculptures, and planning the exhibition.
Throughout her transatlantic trips over the next couple of years, Palmer amassed most of her collection, eventually acquiring works by Pissarro,
George Inness
,
Jean-Baptiste-Camille Corot
, and
Mary Cassatt
—an American woman who, like Palmer herself, had absorbed the tenets of French Impressionism. Over her lifetime, Palmer purchased around 90 works by Monet, including nine haystack paintings—one of them, Meules (1890), is the luminous example Sotheby’s sold earlier this year for $110.7 million. She wasn’t precious about the collection, though. Adopting lessons from her real-estate magnate husband, she sold paintings to make profits and fund new acquisitions.
Yet Palmer’s relationships with the artists she acquired could be deeply personal. Cassatt became a friend and advisor to Palmer, shaping her patron’s taste and appreciation for Impressionism. Palmer also commissioned a major mural from Cassatt that decorated the Woman’s Pavilion at the Columbian Exposition. Featuring women and nude babies, the massive, 58-foot-long triptych was a critical flop and disappeared just after the exposition closed. But the mural was a major step forward for the Chicago art scene: For the first time, the new Impressionist mode was on public view in the city. In the ensuing decades, Cassatt would become famous.

An American in Paris 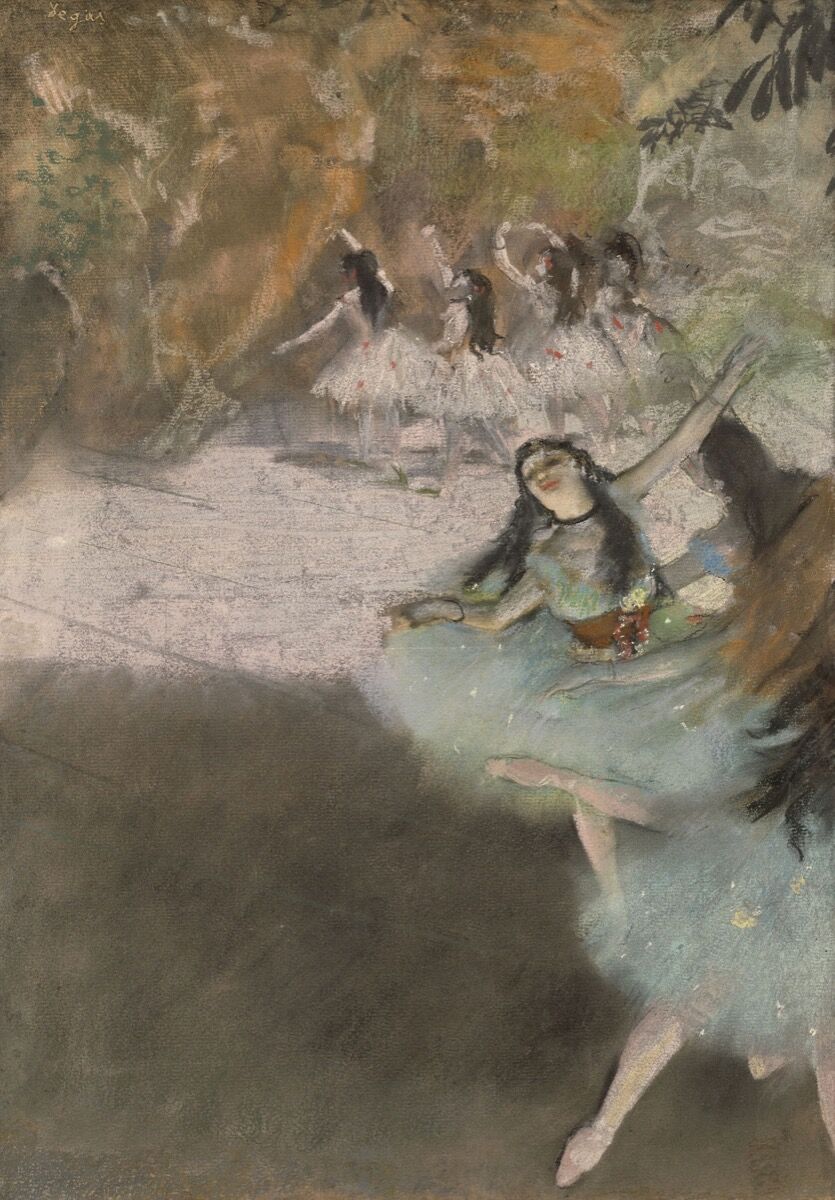 Edgar Degas, On the Stage, 1876–77. Courtesy of the Art Institute of Chicago.

U.S. president William McKinley took note of Palmer’s taste and diplomatic skills. In 1900, he appointed Palmer as the only woman to serve on that year’s national committee for the Paris Exposition. Five years later, she became the only American woman to ever model for
Auguste Rodin
, after her friend and dealer, Sarah Hallowell, convinced Palmer to sit for the sculptor. Paris’s Musée Rodin now owns five busts in plaster and marble of Palmer, plus a preparatory drawing.
Despite Palmer’s ambitions and connections, she was limited by the day’s sexism and her own conservative mindset. She declined a prestigious designation from the Legion of Honor, believing that American women shouldn’t take the foreign award. Her once-radical tastes also had their limits, and she was unimpressed after seeing work by
Pablo Picasso
and the German
Bauhaus
at the 1900 Paris Exposition. As if retiring from cultural stewardship, she moved to Sarasota, Florida, in 1910, and gave up art collecting for fruit farming. But by then, she’d already made a definitive mark on the Chicago art scene. She made two bequests, totalling $500,000, to the Art Institute of Chicago, and sponsored a $1,000 prize for the best work shown at the museum’s annual exhibition.
Two of the museum’s galleries are still devoted to works from Palmer’s collection, which initially totalled 51 French paintings. An 1893 portrait of Palmer by Swedish artist
Anders Zorn
currently hangs in the Ryerson Reading Room, part of the European Painting and Sculpture Wing. In the picture, Palmer wears a white gown and tiara. Her likeness presides over the gallery like that of a fairy godmother, bestowing her blessing on the museum she helped build.
Alina Cohen
Related Stories 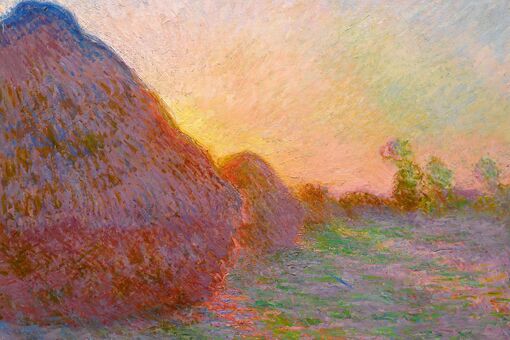 Why This Claude Monet Haystack Could Sell for over $55 Million
Alina Cohen
Apr 24, 2019