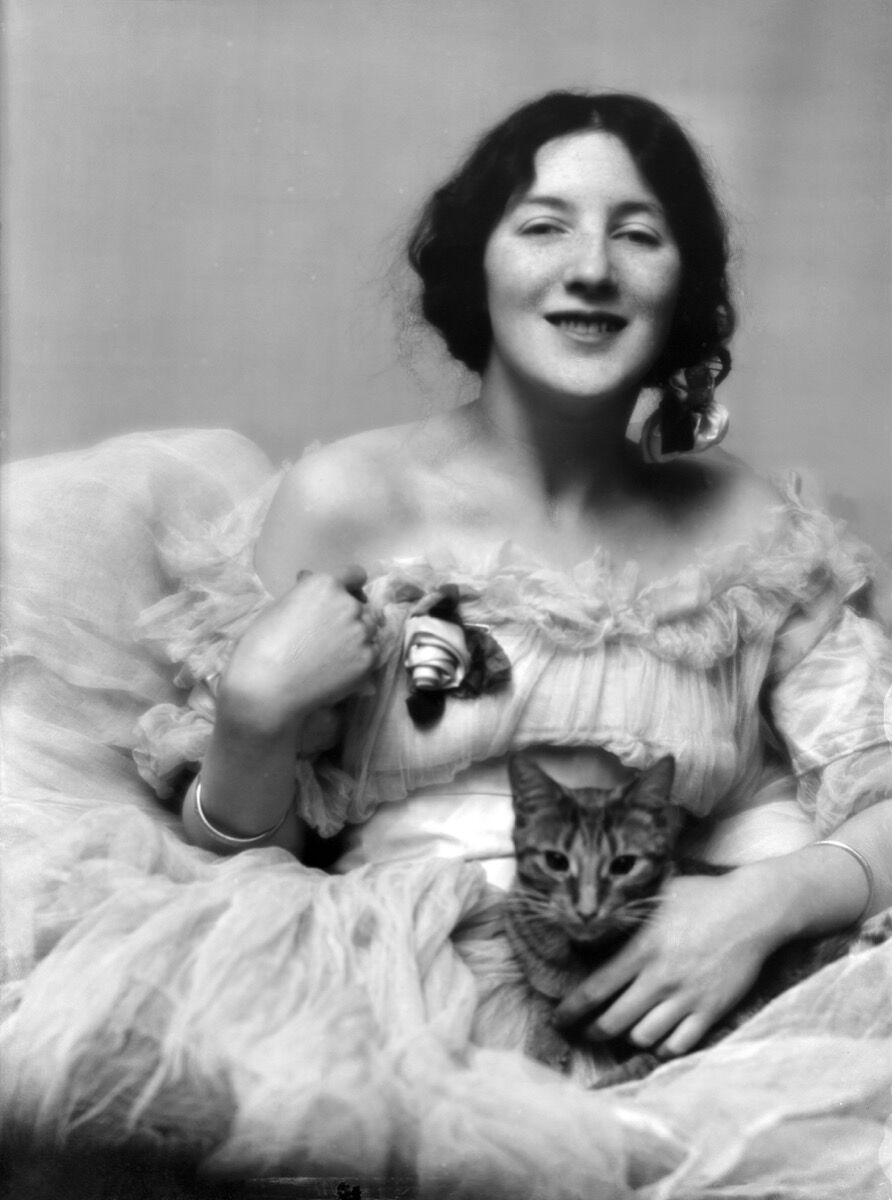 Audrey Munson with Arnold Genthe’s cat, Buzzer. Courtesy of the Library of Congress. 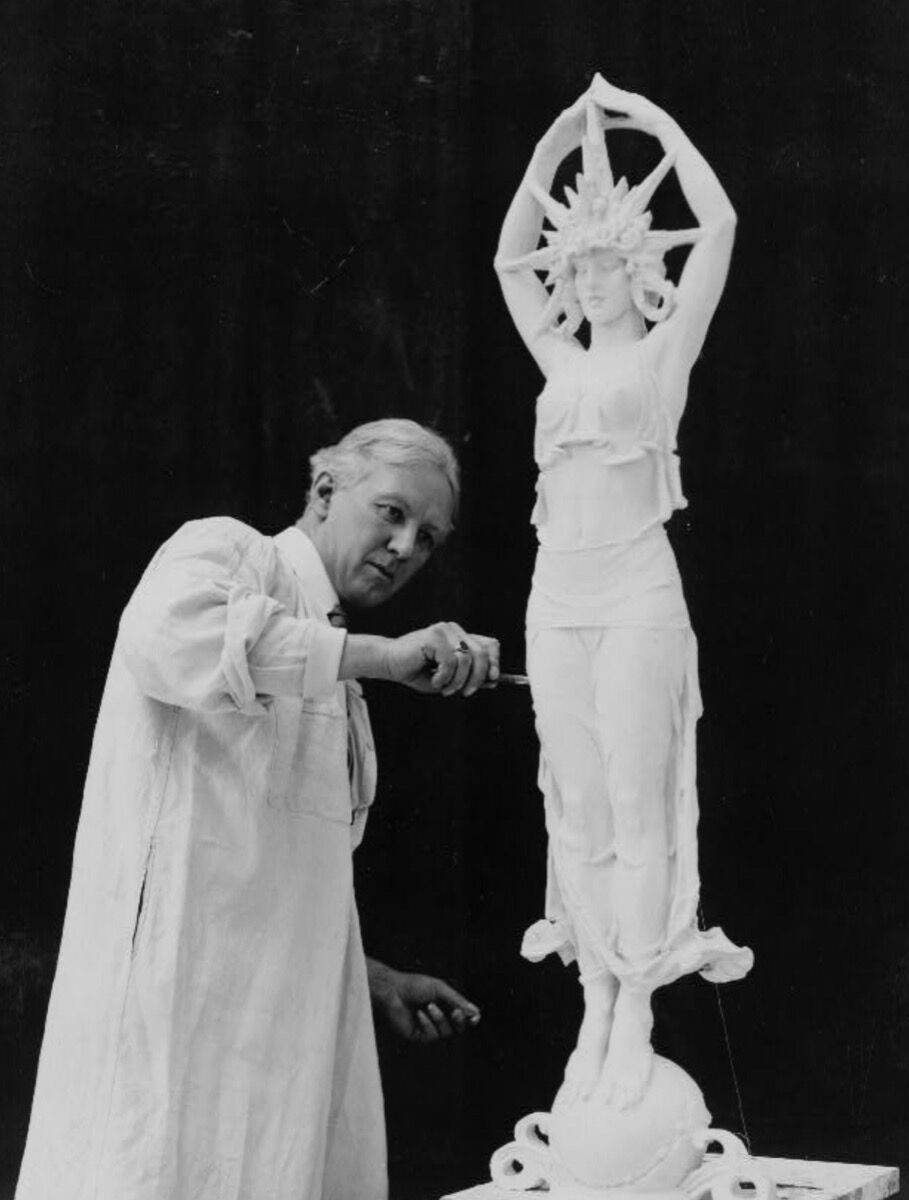 Alexander Stirling Calder working on a sculpture for the Panama-Pacific International Exposition in San Francisco in 1913. Courtesy of the Library of Congress.

Not many people know Audrey Munson by name—but if you’ve spent any time in New York City, you’ve seen her face. After all, Munson’s likeness tops some of the city’s grandest buildings. She’s the subject of a handful of its largest sculptures, and is featured in a whopping 30 statues at the Metropolitan Museum of Art. Her influence extends further, too, all the way to the White House, which holds a piece that borrows Munson’s features and fierce gaze.
How did one woman come to captivate so many? In the early 1900s, Munson—an artist’s model, actress, and writer—was a household name in the United States, lauded by many as both the “American Venus” and the “Perfect Woman.” The country’s most celebrated artists, like Gertrude Vanderbilt Whitney and
Daniel Chester French
, invited her into their studios. Hollywood enlisted her to star in trailblazing films, like Inspiration (1915), directed by George Foster Platt. And newspapers ran her first-person, tell-all articles to the delight of readers hungry for more insight into this great, gutsy beauty. (If the rumors are true, it would have been hard to find an American schoolboy circa 1915 who didn’t harbor a passionate crush on her.)
But, like so many women of her time, Munson’s star faded fast and hard—eclipsed by the male artists she worked with as model and muse. Even when she is remembered, it’s often for the more scandalous and tragic events in her life (controversy around her nude modeling; struggles with depression) rather than her essential role in the creative process, and her work as an advocate for the rights of creative women. 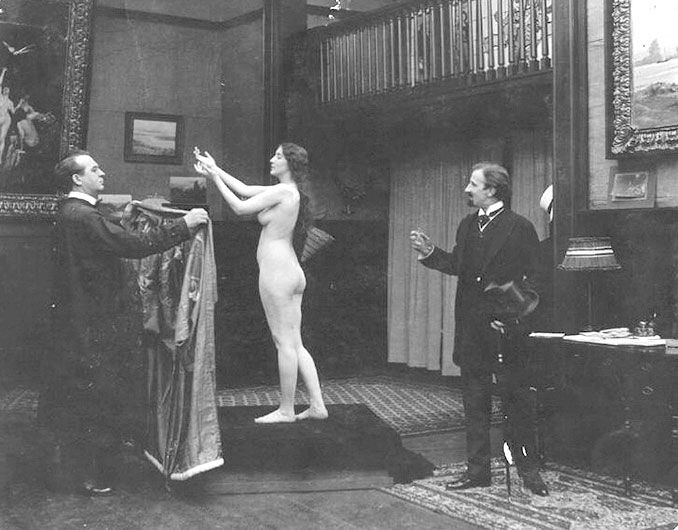 Audrey Munson in her role as an artist’s model in the film Inspiration, 1915.  Photo via Wikimedia Commons.

“There were tragic aspects to her life, and that’s a juicy story to tell,” artist
Andrea Geyer
explained to Artsy. Geyer, whose practice is research-based and often focuses on the untold stories of women, made a series of photographs and collages inspired by Munson’s life: an attempt to rewrite her distorted, mostly forgotten legacy. “It’s also important to tell Munson’s story with the agenda that she had in mind—one where she not only had agency, but also creative power,” Geyer continued.
Munson was born in 1891 in Rochester, New York. Before she was 10 years old, her parents divorced, setting off a life of financial struggle for Munson and her mother (who had sole custody of her daughter). But Munson had dreams of supporting herself as an actress, and between 1907 and 1909, both she and her mother relocated to New York to pursue her goal.
It was around this time that Munson, still in her teens, was scouted while walking through Manhattan; a photographer, captivated by her beauty, asked her to sit for him. The gig jumpstarted Munson’s role as artist’s muse, and led to her first major job: modeling for a then-famous sculptor named Isidore Konti.
Konti, though, had one non-negotiable request: He wanted Munson to pose nude for one of his sculptures. His intentions, he insisted, were pure. “To us, it makes no difference if our model is draped or clothed in furs,” he claimed. “We only see the work we are doing.” Munson’s mother was eventually convinced. 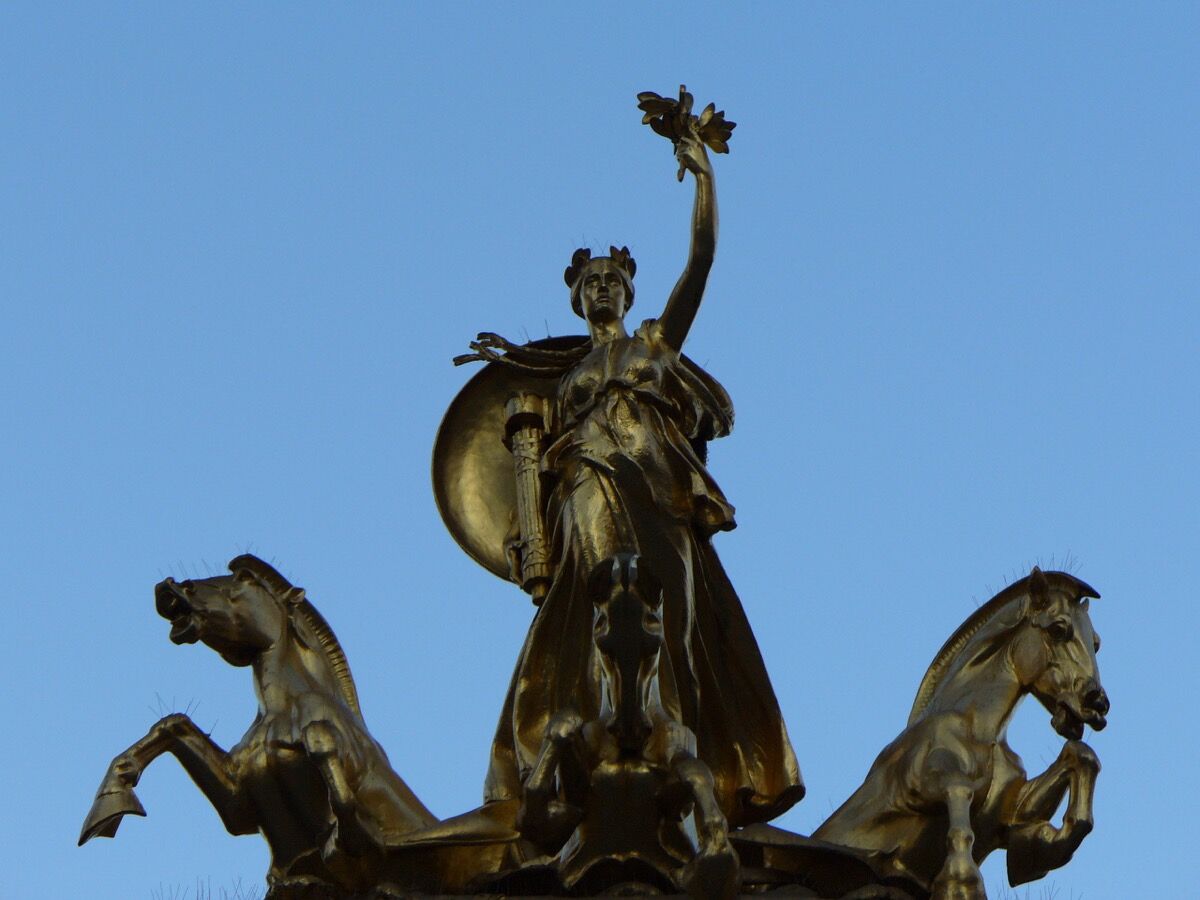 Advertisement
Soon after, Munson became one of New York’s most sought-after nude models, inspiring the greatest sculptors and painters of her time, from Vanderbilt Whitney and
Chester French
(of Lincoln Memorial fame) to Attilio Piccirilli and A. Stirling Calder. She posed with the dramatic flair and sensitivity of an actress, and artists’ interpretations of Munson began surfacing all over the city. You could find her likeness in the New York Public Library, leaning against a horse; on top of the Manhattan Municipal Building, gilded and presenting a crown with aplomb; and at Columbus Circle, a stern, stone figure serving as the centerpiece for the USS Maine monument. By 1915, when she was selected as the model for a large series of highly publicized works commissioned for the World’s Fair in San Francisco, Munson was undoubtedly one of America’s most recognizable figures.
Hollywood and Broadway took note and began producing blockbuster silent films and plays in which Munson acted as a version of herself: a bold model whose work was marked by both agency and artistry. With titles like Inspiration (1915), Purity (1916), and The Girl O’ Dreams (1918), they highlighted Munson’s essential role as an active—rather than passive—muse.
These films, with their smattering of nude scenes, were also controversial, and many theaters banned them. Through them, “the fine line of art was examined,” as writer Justin White (whose grandmother and aunt knew Munson) put it in his 2007 essay “Rediscovering Audrey.” Indeed, Munson’s films exposed both the “true skill and instrumental role a model plays in the creation of the human form in art” to a large, national audience. “To pose nude for an artist in privacy was one thing,” White continued, “but to bring it to the masses was a courageous, perhaps even bold, move on her part.”
Munson’s unwillingness to be a silent partner in the artistic process manifested in other media, too. In 1921, she penned a series of 20 articles about her life and work for the popular magazine The New York American, a Hearst publication. Across Queen of the Artists’ Studios, as her articles were collectively titled, she emphasized the collaborative nature of the artistic process and the important role of the model. She also exposed salary discrepancies (between women and men, as well as between female actresses and artist’s models), and alluded to the inherent sexism of the art world in the early 1900s. 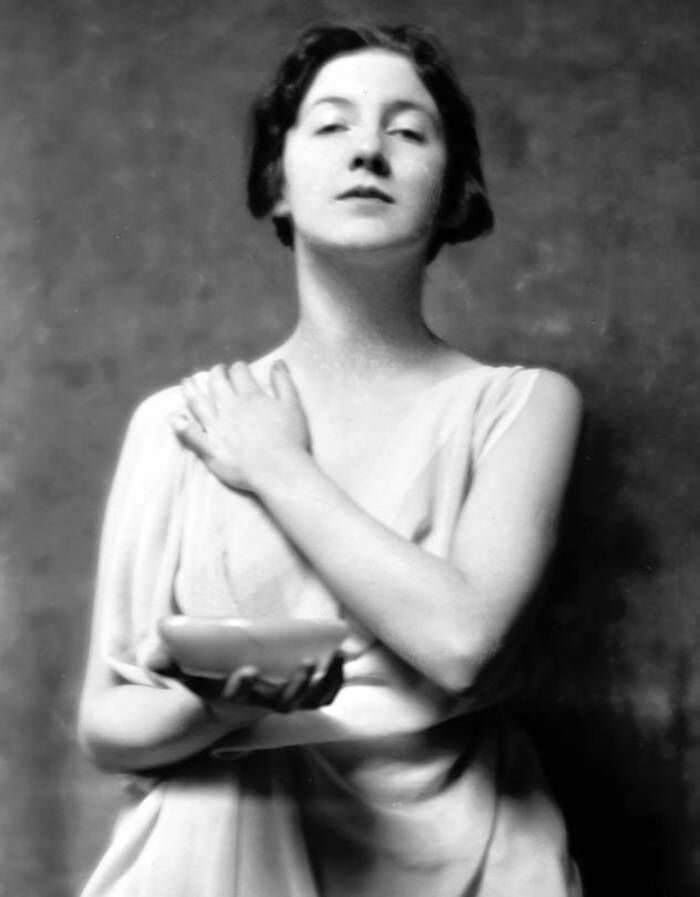 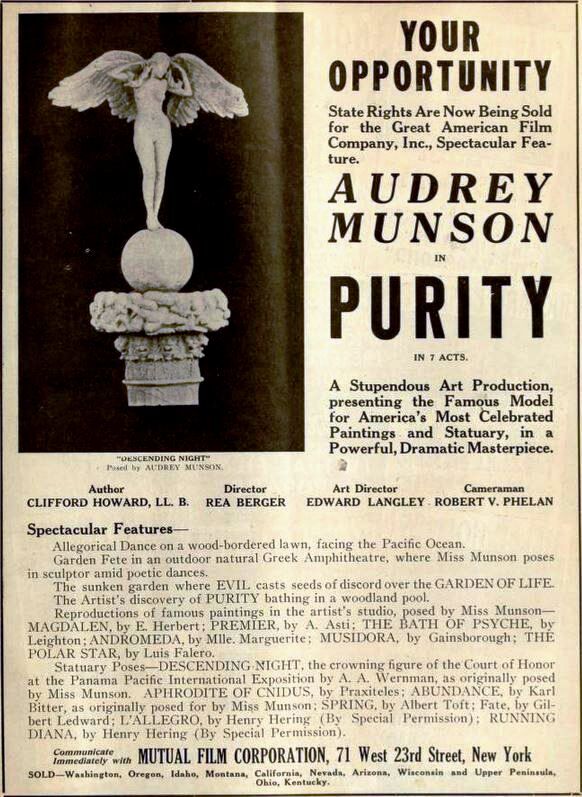 Advertisement for the film Purity, in Moving Picture World, 1916. Photo via Wikimedia Commons.

“In a successful play the principal actors and actresses who contribute to its success are given due praise…and such honors mean increases in salary and a step at least one notch higher on the road to fame and prosperity. Not so with the artist’s model,” Munson wrote. “She remains ever anonymous. She is the tool with which the artist works…though she provides the inspiration for a masterpiece and is the direct cause of enriching the painter or sculptor.”
While Munson wrote the articles at the height of her career, she began to see something that her contemporaries hadn’t yet: that her legacy, like those of other women like her, was by no means set in stone.
For some, the chance to have an image survive into posterity seemed like it should have been enough. To Norman Rose, who interviewed Munson during her heyday, she was “a slender, graceful girl who will live in marble and bronze and canvas, in the art centers of the world, long, long after she and everyone else of this generation shall have become dust!” But Munson, in her own accounts, seemed to predict a different future: “Where is she now, this model who was so beautiful? What has been her reward? Is she happy and prosperous or is she sad and forlorn, her beauty gone, leaving only memories in the wake!”
In 1922, a year after Munson wrote these words, she attempted suicide. By that point, modeling requests and film roles had begun to slow, and she had been embroiled in two scandals that seemed to negatively affect her reputation. The first came in 1919, when Munson’s landlord murdered his wife because, according to him, he wanted to marry his famous tenant. Munson denied any romantic relationship and was cleared, but the media latched onto the story nonetheless. 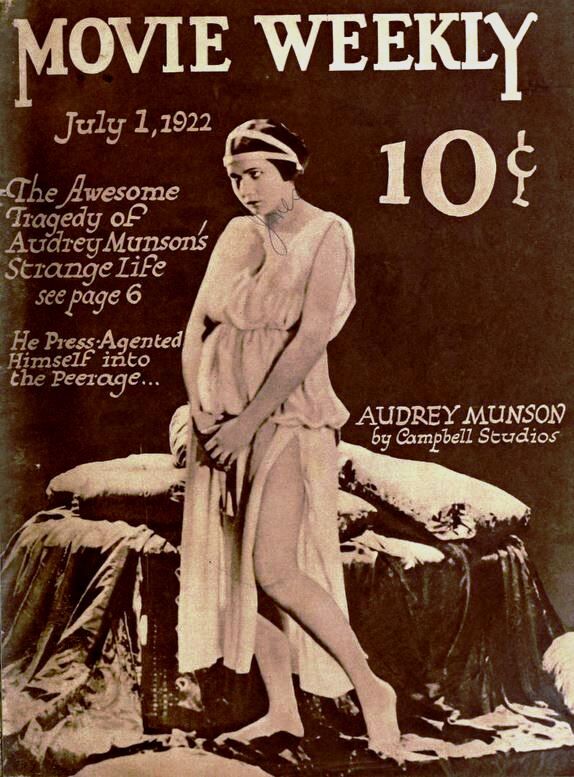 Film still of Audrey Monson in Heedless Moths, 1921,  on the cover of Movie Weekly, 1922. Photo via Wikimedia Commons. 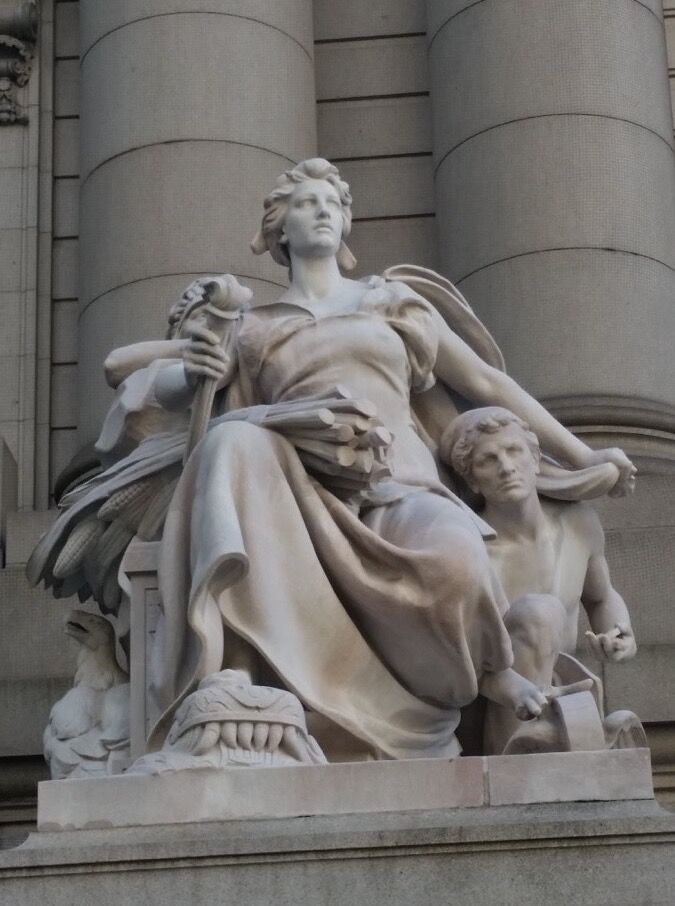 The other incident, which took place in 1922, bears a striking resemblance to recent stories that have emerged in the wake of the #MeToo movement—and Harvey Weinstein’s conduct in particular. In Munson’s telling, a powerful Broadway producer (whom she never named) entered her dressing room during the production of a play called The Fashion Show. He made sexual advances, to which, as she later recalled, she boldly rebuffed: “Don’t touch me. I hate you. Your touch is repulsive to me. I would rather have a snake crawl over me than to feel your hand upon me.” The lecher didn’t react well. A few days later, Munson was told—without explanation—that the play was closing imminently. From then on, she struggled to find work.
Afterwards, Munson also battled mental illness; she was eventually committed to the St. Lawrence State Hospital for the Insane in Ogdensburg, New York, at the age of 40. It was there that she died in 1996; typical of Munson’s tenacity, she lived to the remarkable age of 104.
But, as she predicted, it would be years until she was recognized for her unique contributions by historians and artists, like Geyer. After Munson died, she was buried in an unmarked grave—an ironic end to the life of a woman rendered all over the United States in stone and gold.
Geyer, for her part, is intent on raising money for a gravestone to mark Munson’s resting place. “She not only stood up for her own rights, but also became an activist and organizer fighting for the recognition of other women,” the artist explained. “For that and many other achievements, she deserves to be remembered by name.”
Alexxa Gotthardt
Related Stories